There's no doubt that 2011 will be one of those years that I always remember. 2011 was the year Ben, Mike, and I decided to follow our hearts and pursue the STANCE|WORKS journey that we all had been working so hard on. As early spring approached, I was packing my bags and moving across the country to station myself in Southern California, along with Ben, to dive into the S|W lifestyle head first...documenting it all along the way.

With 2012 already in full swing, I've been looking back, reminiscing, and celebrating everything we've accomplished and experienced in the last year. A look back on the past year through my photo lens... 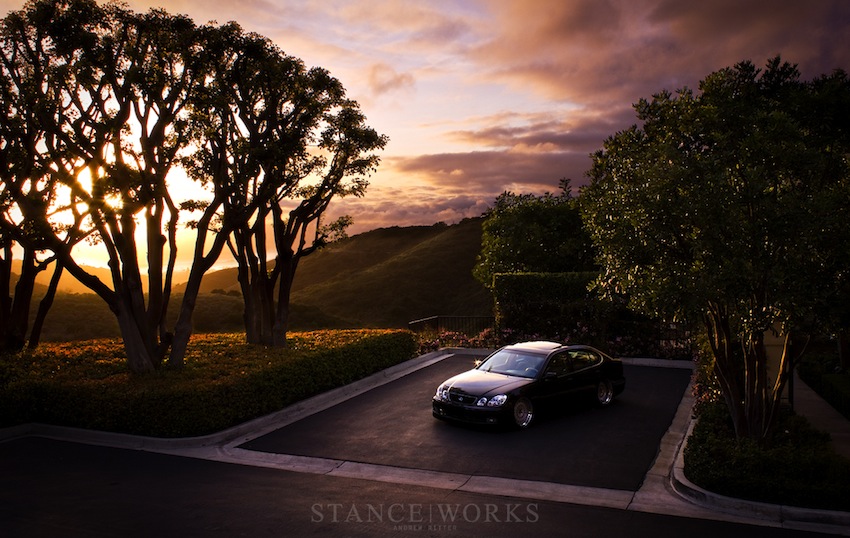 Charles was the one to help us get settled in our new office and his impressive VIP Lexus GS was the first car that I had the pleasure of shooting. In reverence of California's beauty, I precariously stationed my tripod on the edge of a cliff to capture the sunset through the valley. 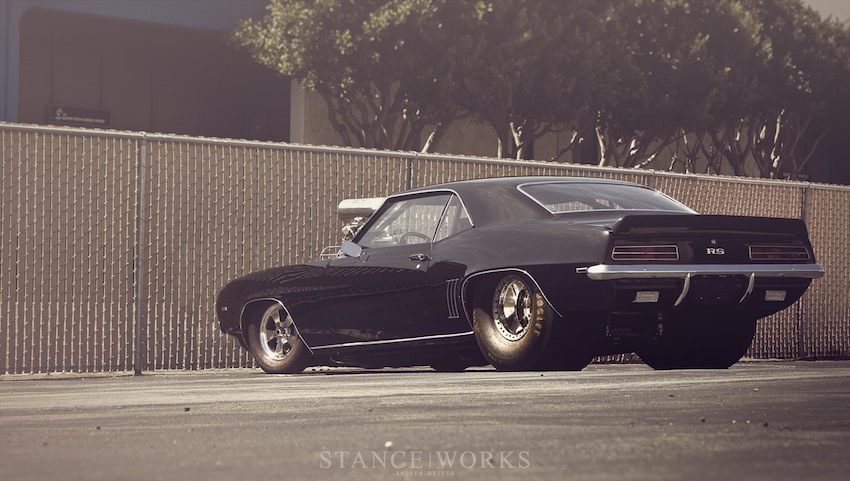 It quickly became apparent that awe inspiring cars were hidden everywhere in parking lots throughout the area. I snapped this shot as the Camaro awaited a detailing at a shop down the way from our office.

Take a peek at this drag ready Chevy Camaro RS.

The Viva Las Vegas show really opened my eyes to the other automotive cultures that are alive and thriving. We couldn't help but fill our cameras' memory cards with all the inspiring cars that were in attendance.

Experience the rest of our footage from the Viva Las Vegas Rockabilly Show. 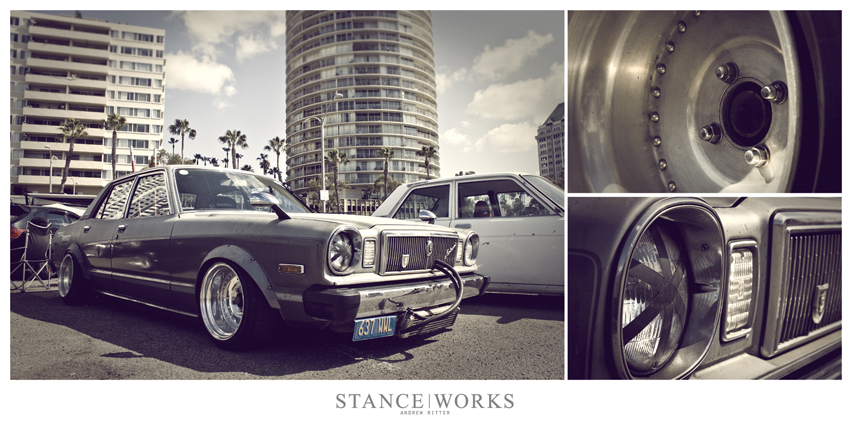 I love photography's ability to capture the character inherent in all things. This Toyota Cressida is chock-full of soul, so I really enjoyed the chance to capture it at this year's Formula D Drift Event. 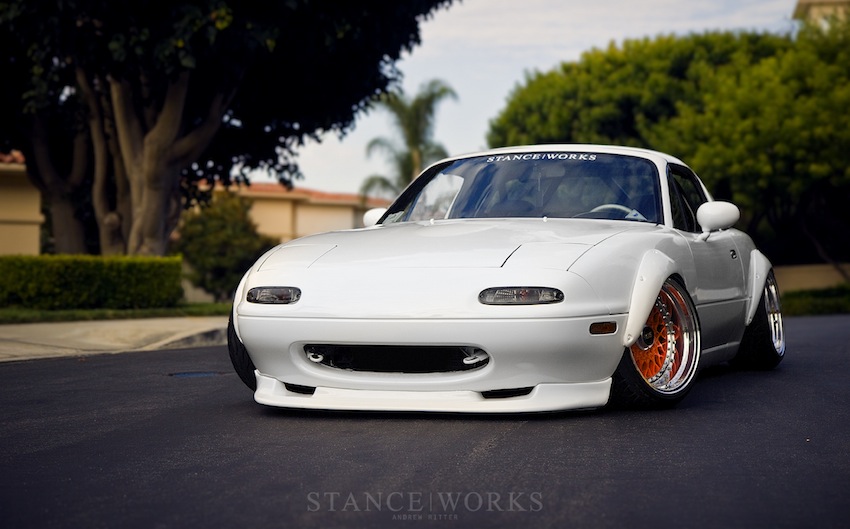 When out shooting cars for future STANCE|WORKS features, I always enjoy the people I meet along the way. It was great to meet up with Zayan and photograph his wildly low Miata. 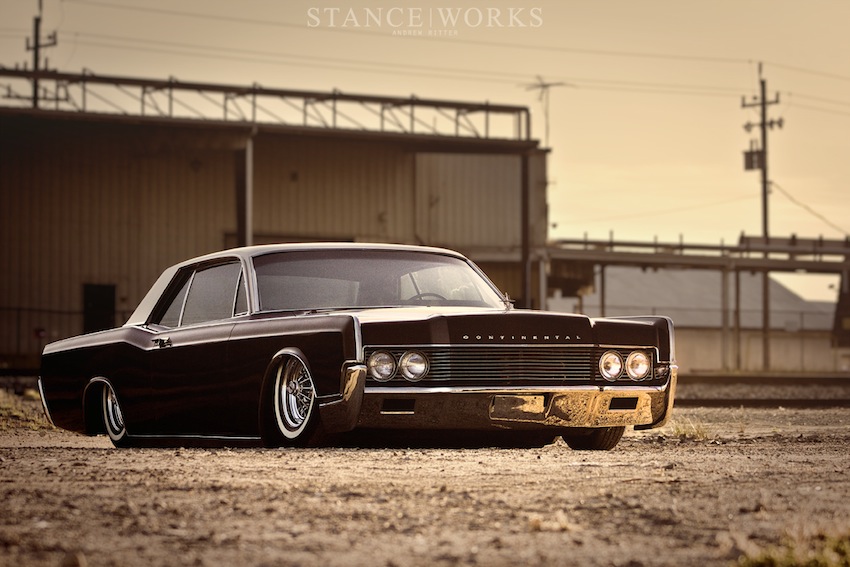 Sometimes you just stumble upon the perfect location for the character and style of your subject. As I was cruising with Mike Alexander in his Lincoln, we pulled off onto a dusty path as the sun set behind the worn industrial backdrop. 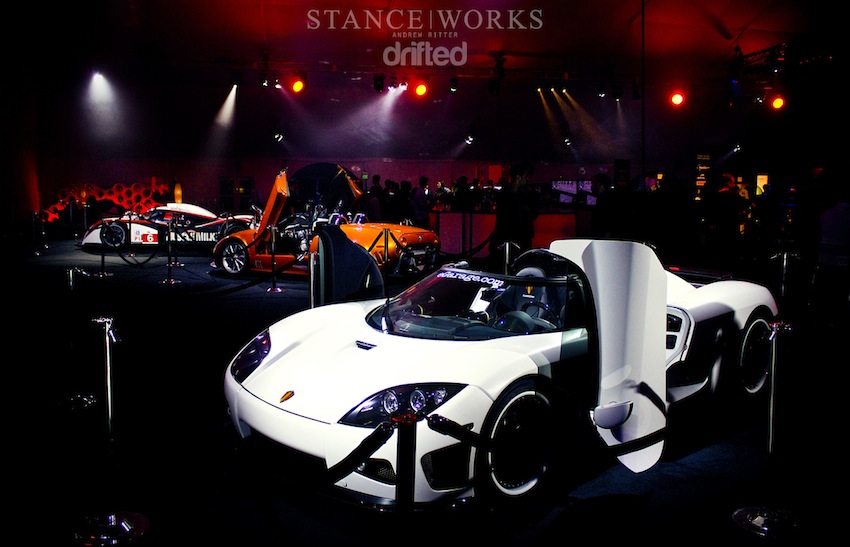 With loud music pumping, spotlights in abundance, and supercars scattered across the floor, our trip to the Forza 4 Release party was a photographer's dream.

Take a step inside to visit our Forza 4 event coverage. 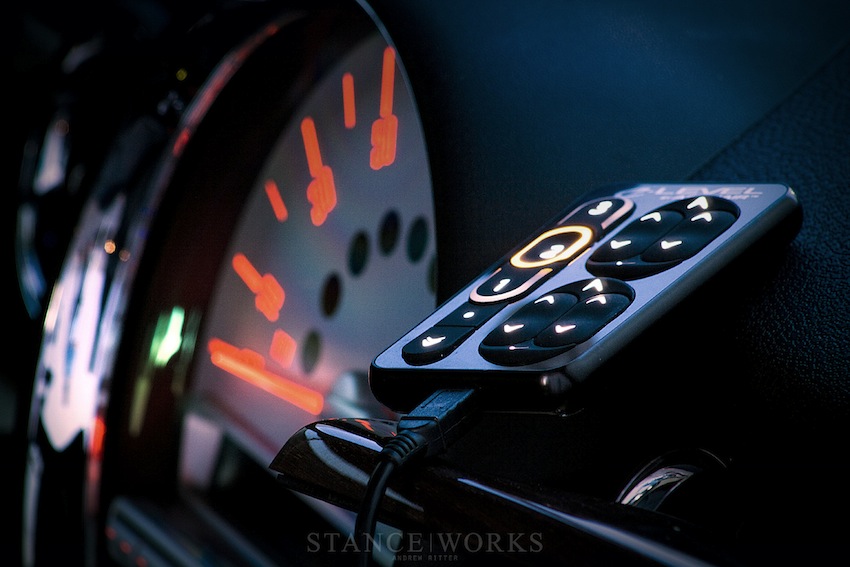 I've been fortunate enough to work along side the guys at Accuair numerous times this year. With such aesthetically pleasing product design, it's easy to capture some great moments such as this photo of my Accuair controller perched inside my MINI Clubman one summer evening.

Check out the related articles to find out more about my MINI Clubman and the Accuair E-Level Install.

It's impressive to watch videos of Ken Block whipping his car through crazy venues on the internet, but being able to experience it only a few feet away behind the media photographer barrier was just insane. I walked away from this shoot with a grin on my face and bits of rubber in my hair.

Get in on the action and check out our shots from Ken Block's Gymkhana. 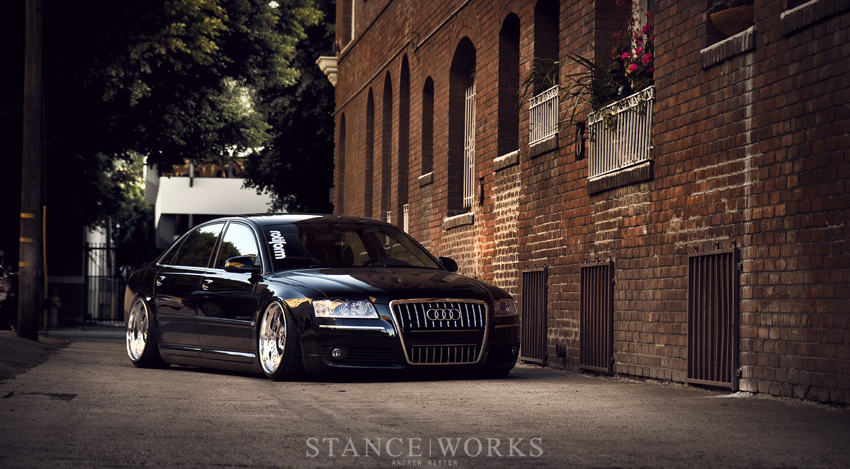 It seems that Rotiform always has a few amazing cars in their hands at any given time. I was excited to be given a chance to shoot Brian's Audi A8 as it was my favorite car that had a spot in the Rotiform parking lot this year.

Have a look at Rotiform's Bagged Audi A8. 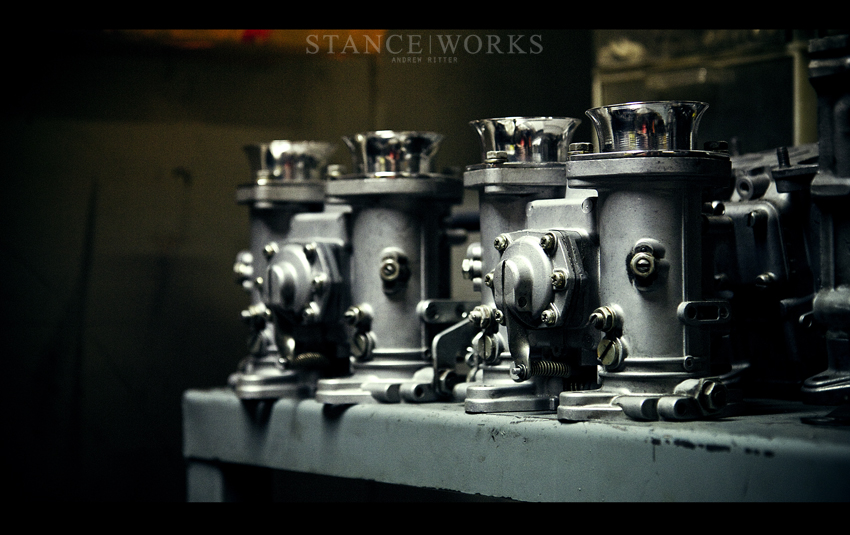 Walking around Ireland Engineering's garage was like walking through a candy store. I was taking pictures left and right of all the parts, cars, and inspiring details that made up the shop. 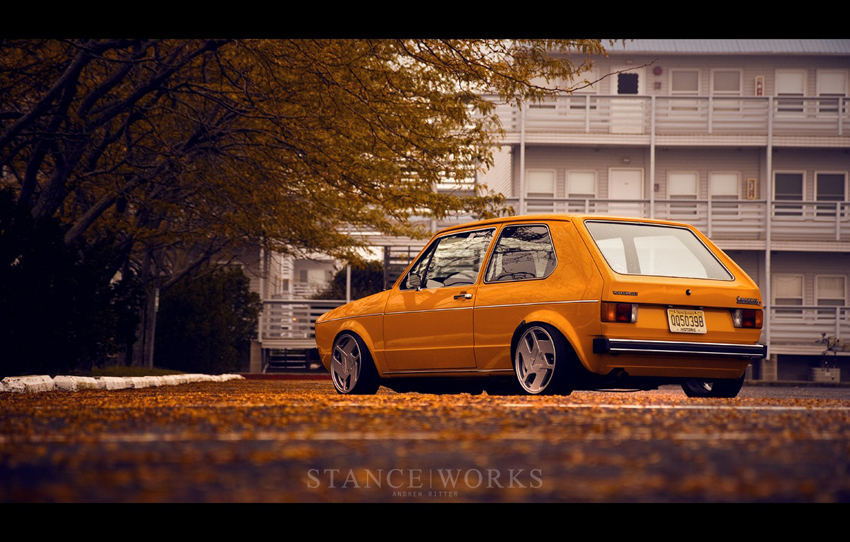 I was honored when we were given the chance to shoot one of my favorite mk1s at h2o. We really lucked out when Mike and I found a parking lot strewn with orange leaves. It offered the perfect atmosphere for the brightly colored Rabbit. 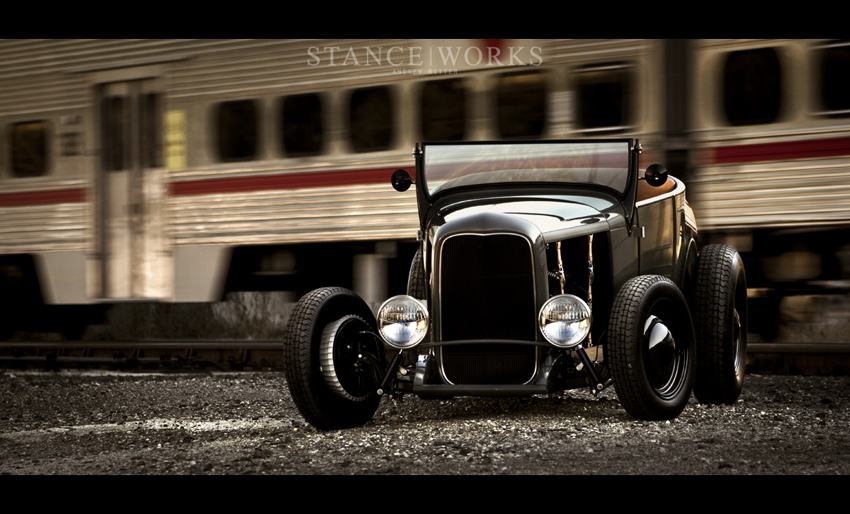 We drove up to visit Nic from eGarage and shoot some of the cars in his collection which resulted in my favorite shoot to date. We backed his newly finished Ford Roadster up against the local train tracks at the end of a gravel path and started shooting. A beautifully built subject, a rough and raw location, and a setting sun were the perfect combination.

See more of my photos from the shoot with eGarage's Ford Roadster. 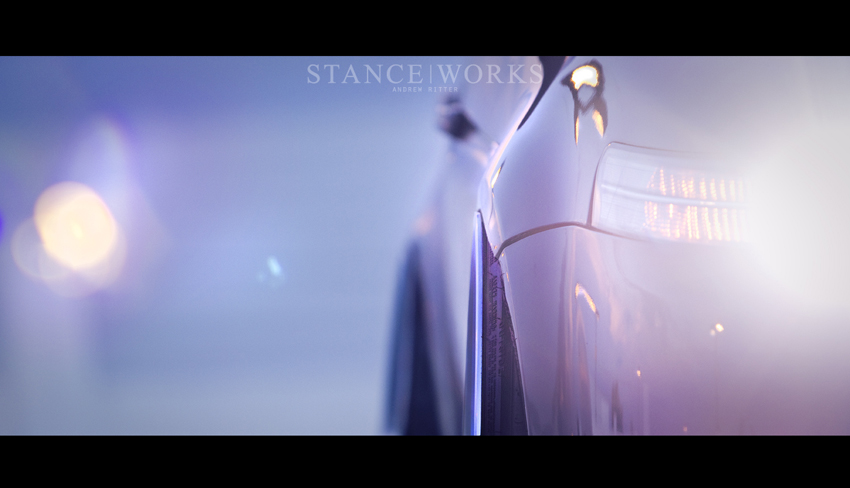 In the Fall, Mike moved out to join Ben and I at the STANCE|WORKS office. This meant that Mike and I have been teaming up on many of the feature shoots. It's amazing what can come from working along side a fellow photographer. We regularly bounce creative ideas off each other and encourage each other forward with every shoot we take on.

See the rest of this fitted Acura TL.

Having never really given rolling shots an attempt, I found myself hanging out of the window of Stephen Sayer's BMW to capture the insane fitment on Armand Pranadi's Toyota MR2.

Enjoy the rest of the photoshoot with this Toyota MR2 on Work Meisters.