This past Saturday, Andrew and I were invited out by Matt and Brad @ fifteen52 to go see Ken Block perform at a special edition of his Gymkhana World Tour. Why "so special" you ask? Because Mr. Block (of DC Shoe fame) unveiled this:

What you are looking at is Ken's latest race-car, aimed at participating in all 3 various racing circuits, aptly named the "Hybrid Function Hoon Vehicle." The "hybrid" infers that the heavily modified Ford Fiesta will be used in the Stage Rally Series, World Rally Cross and Block's own Gymkhana Series. The Hoonigan Engineers have built this car to handle 600hp and 650ft/lb tq and man, was every bit of it used at the car's unveiling ceremony.

This was a private event held at the top lot of Dodgers Stadium overlooking the skyline of Los Angeles. The location could not have been better, as the Ford Fiesta proceeded to create billows of smoke that could be seen from space. Not only did we get to see the new Fiesta, but we also got to see fifteen52's new Tarmac wheel unveiled as the official wheel of the Gymkhana Series. Knowing how hard both Matt and Brad have worked in making this reality come to life, it was a real treat to see it culminate into this one moment. 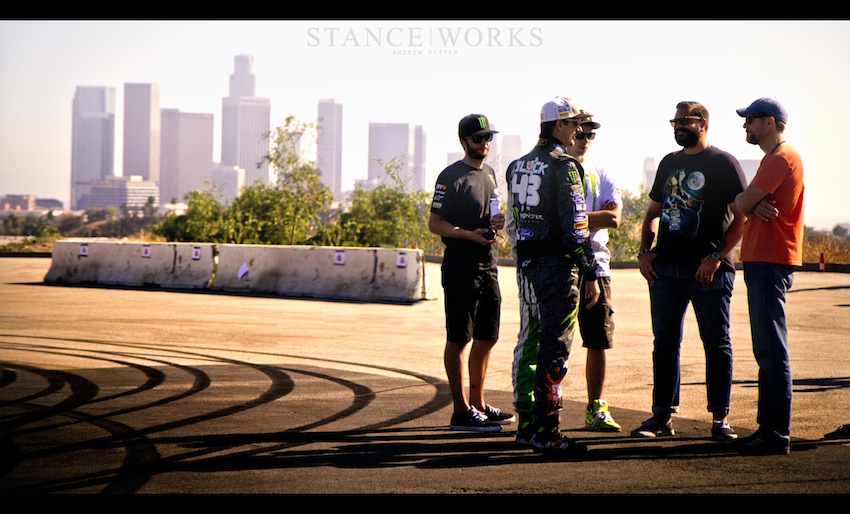 Ken Block is a force to be reckoned with these days. From the outside looking in, he is larger than life and frankly, when an identity gets to that stage, it becomes alienated from the true enthusiast. Such was my presumption going to this event, but it was quite the contrary. While the event was very well-organized, with enough Monster Energy trailers and equipment to sanction an assault, it was inviting and accessible. We met with Ken's marketing manager, Brian, and he was completely down to earth, just jazzed to be at the event and meet people. Nothing was off-limits and everyone was warm and welcoming; a far cry from most events and organizations of this stature. 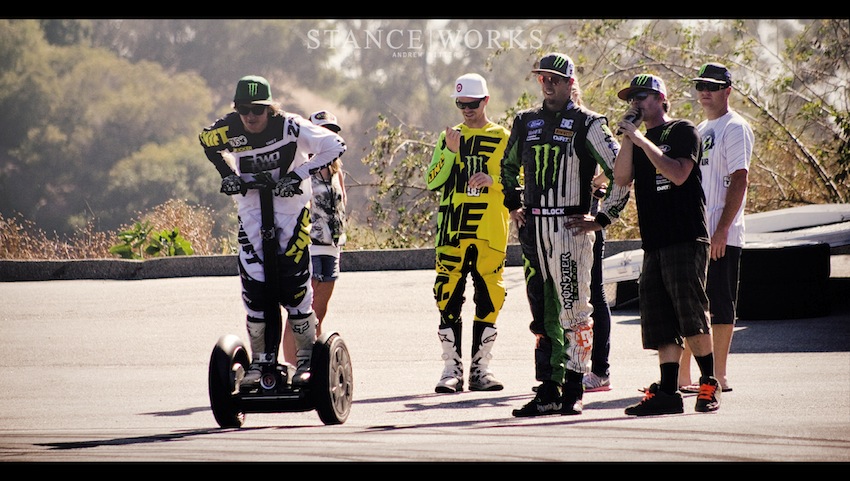 The event didn't disappoint, with Ken putting on a show of his precise driving abilities. To see him perform in one of his notorious YouTube videos is cool, but to see him display it before your very eyes is something different altogether. We were so close to the barriers that I'm still picking out pieces of rubber and asphalt out of my scalp (that is not an over-dramatization either.) 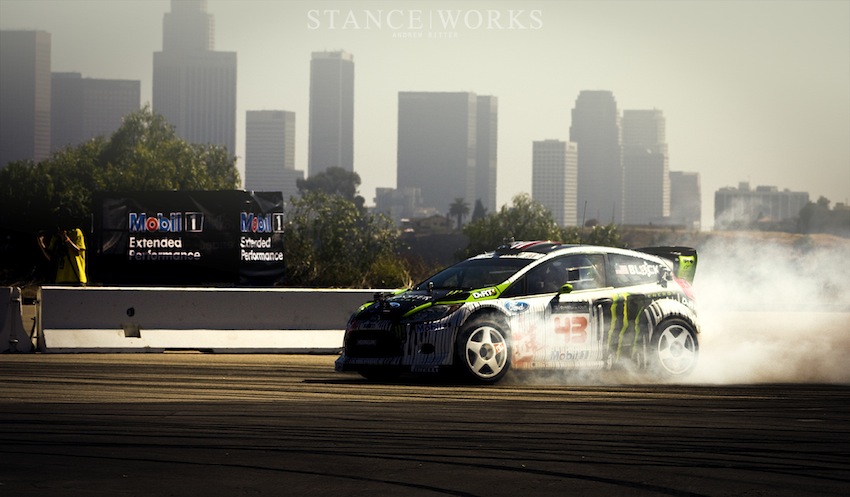 It didn't stop there. In between Ken swapping out tires, we got to see freestyle motocross rider Blake Williams, as well as DC and Monster Energy rider Nate Adams perform some incredible aerial maneuvers. The show culminated with Ken doing donuts in between the ramps of the two riders while they were in mid-action. When you are 30 feet away from watching this happen, it's quite breathtaking.

While this was an amazing sight to behold and a privilege to see the only US stop along the Gymkhana World Tour, I must say the thing I was most impressed by was how down to earth Ken Block and his associates came across. This wasn't a guy who had 1.8 million Facebook fans, who helped establish one of the best known action shoe companies in the world, who is a household name for anyone who has a marginal interest in automotive racing of any sort. No, the guy I saw was just another enthusiast pumped on the fortunate opportunities he has had to do cool things with his friends. I left encouraged, that just because you can have a huge ego for your accomplishments and associations, doesn't mean you have to. While Ken Block is indeed bigger than life, apparently he never got the memo, because all he likes is doing "hoon" things with his friends. I, for one, am taking cue and logging off to go do the same. You should too.