Turning Back to the 60s – Scott Crawford’s Britax Mini Cooper

Turning Back to the 60s – Scott Crawford’s Britax Mini Cooper

I first discovered the car while mindlessly wandering through the internet, pounding in Mini-related search queries in a never-ending hunger for Mini photos for my archives. The little yellow Mini seemed to sit a little bit lower than the rest, and a local SoCal shop name was emblazoned on the windshield, but for years the car remained a mystery. I'd find one photo here and one photo there, but I could never quite find information on the owner of the Britax car that seemed to be hiding somewhere on the West Coast of the United states, a long distance from the land where Britax Minis once dominated the saloon car races. Eventually I wrote it off as a unicorn, filing the photos away into my inspiration folders for later appreciation. Then one day, while browsing the entries in anticipation of the upcoming Can Am Mini Challenge, I saw it again. I was finally going to get a chance to see the elusive Britax homage in person. 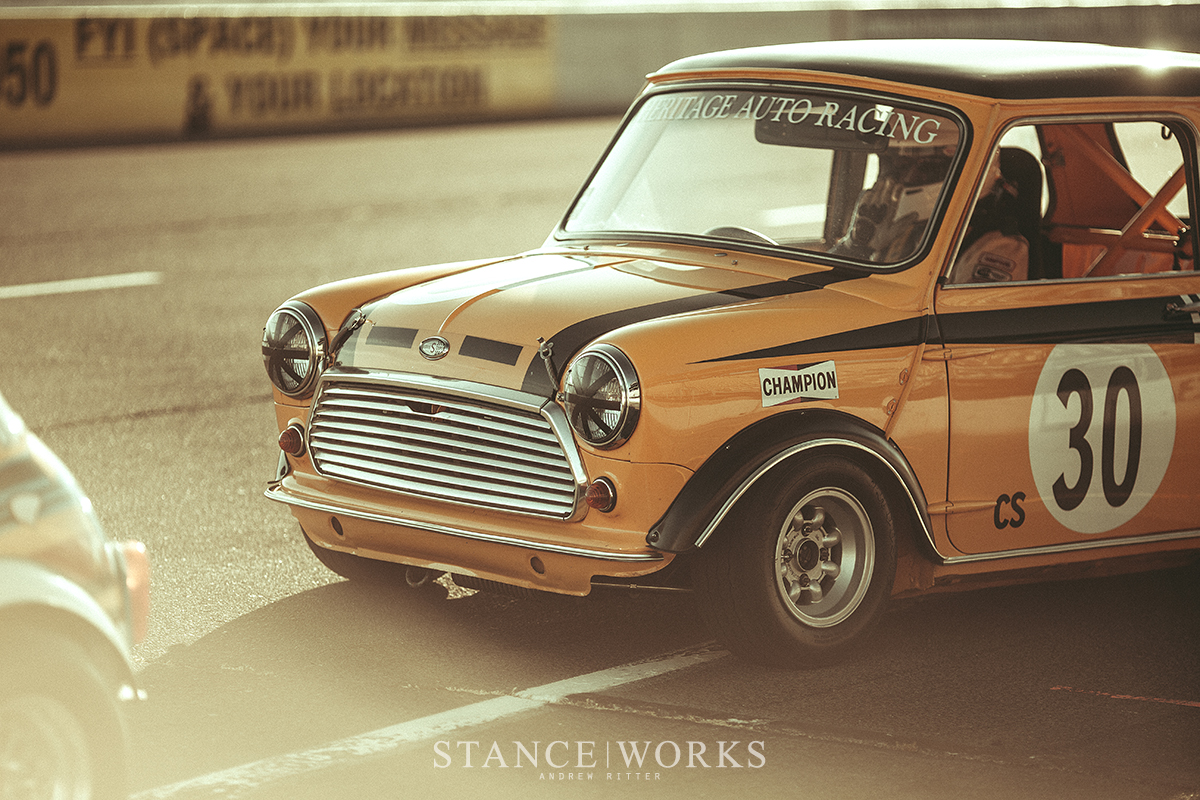 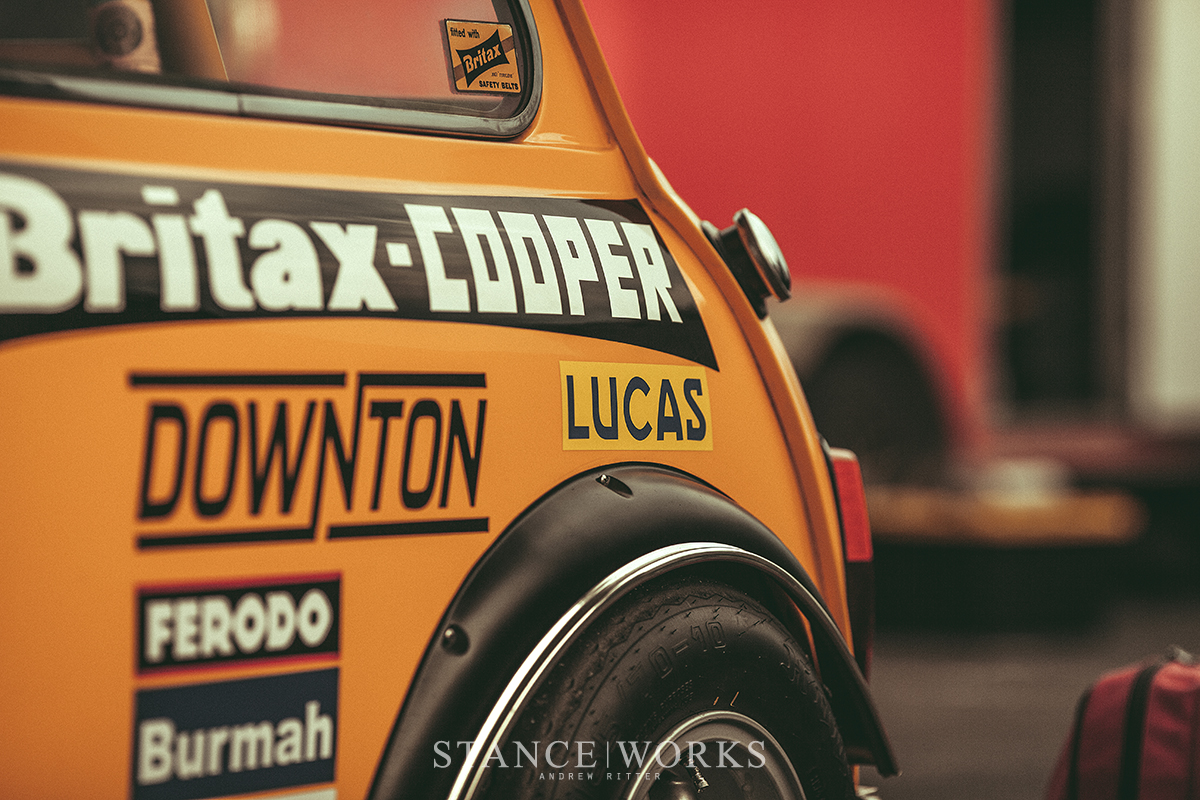 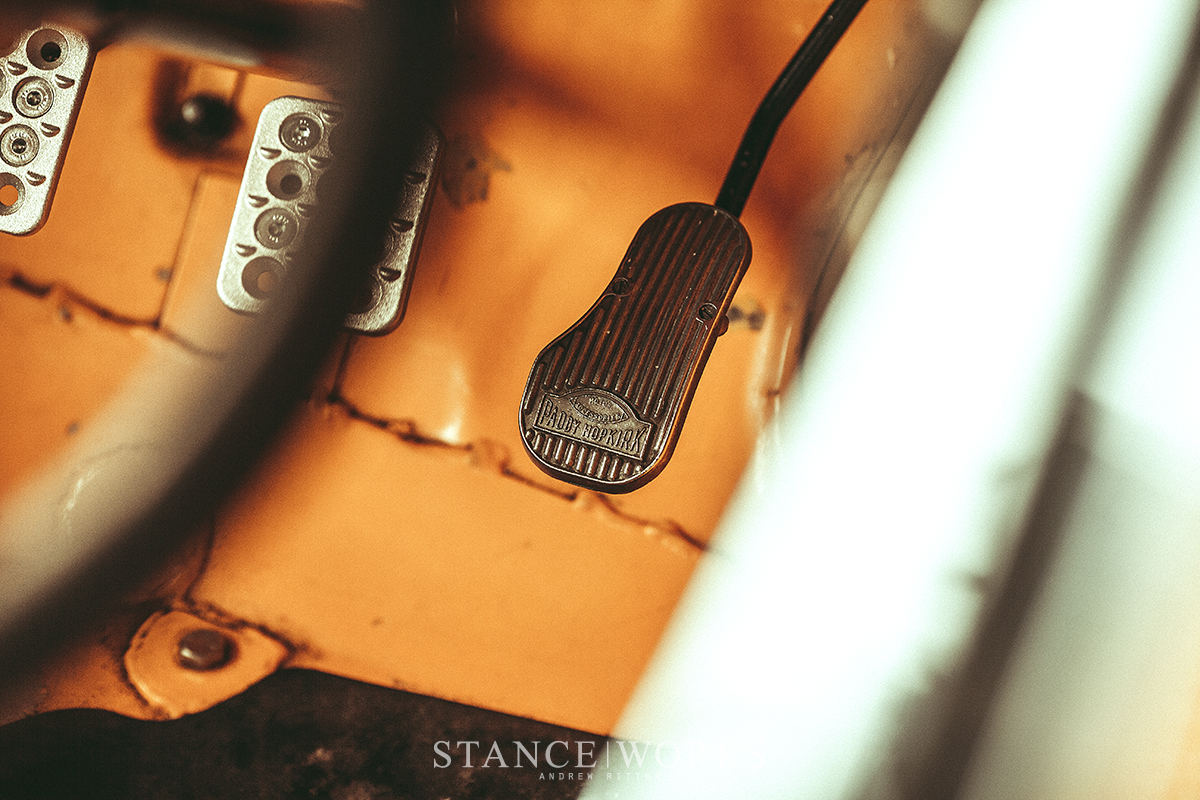 To gain a bit of background, one must look back to the Cooper Car Company, a small garage that specialized in making rear-engined race cars and competed successfully in Formula racing. The Cooper Garage can be given much of the credit for the Mini's success in racing over the decades, as they encouraged the improvements to brakes and engine performance, dead set on being competitive in the little British hatch. In the 60s they campaigned cars in rallies and road races alike with the iconic Red and White color scheme standing out on rally routes while they stuck to the classic British Racing Green of their homeland for the circuits. By the end of the sixties, the green had given way to a Yellow Britax Coopers S with Steve Neal and Gordon Spice at the helm for the British Saloon Car Championship. Since then, the Britax Cooper legacy has been carried on by enthusiasts enamored with the stark yellow livery. 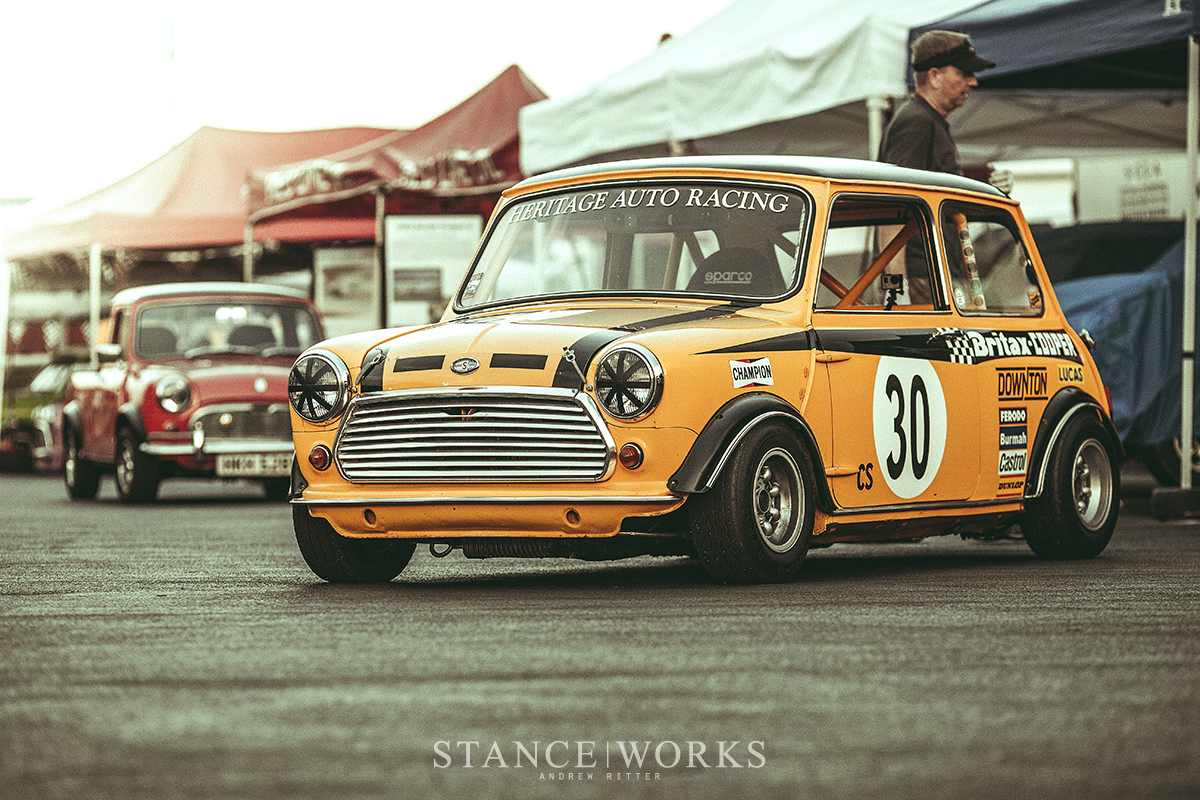 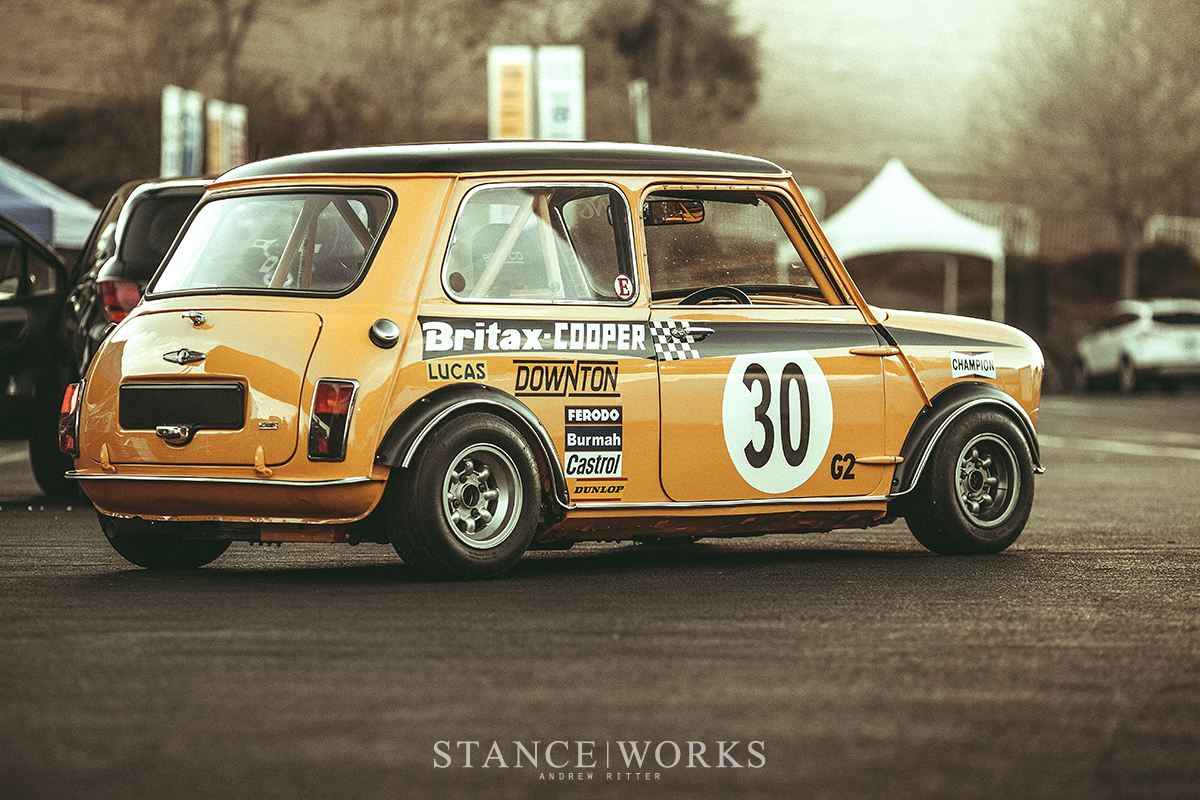 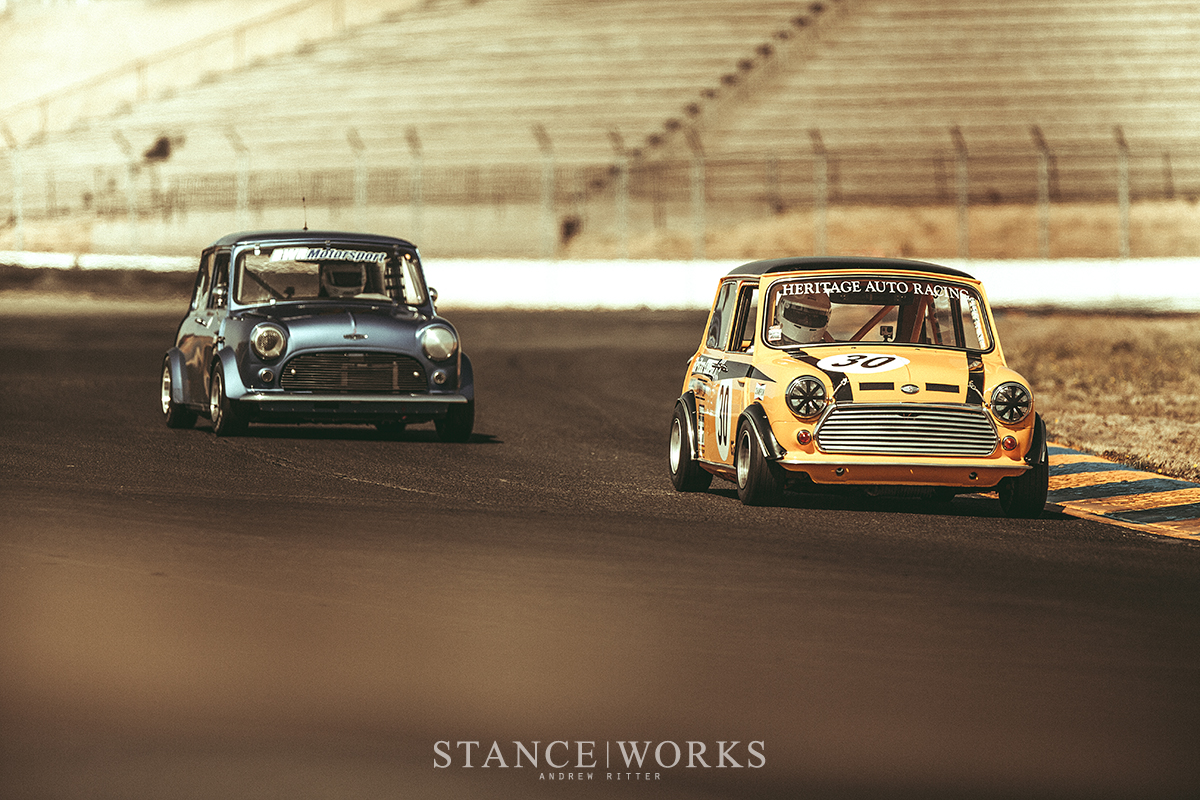 Scott Crawford's Mini story starts back in 1995 with what many might've called a 'lost cause'. Scott was flipping through the pages of an old Hemmings Motor News when a $1,000 opportunity presented itself. With a much more optimistic perspective than most would probably have, he saw the potential in the bare Mini shell that sat before him. The car had been rolled at least once, the front clip had since departed, and the panels gaps made it more than apparent that a few good hits had occurred. If those red flags weren't enough to turn most of us away, the repairs certainly would've, employing buckets of bondo and other work that could probably just barely pass as "good enough" to an owner with low expectations. However, amidst it all, Scott saw the light at the end of the tunnel. Though hardly the same shape as it once was when it left the showroom floor, the Mini was in fact an original 1962 Mk1 970cc Mini Cooper, the rarer Sport model of the common Morris and Austin Minis of the 60s, and with it came a pile of spare parts. At such a low price point, Scott didn't hesitate, and before long he was taking the Mini home with him with promises of a better life for it. 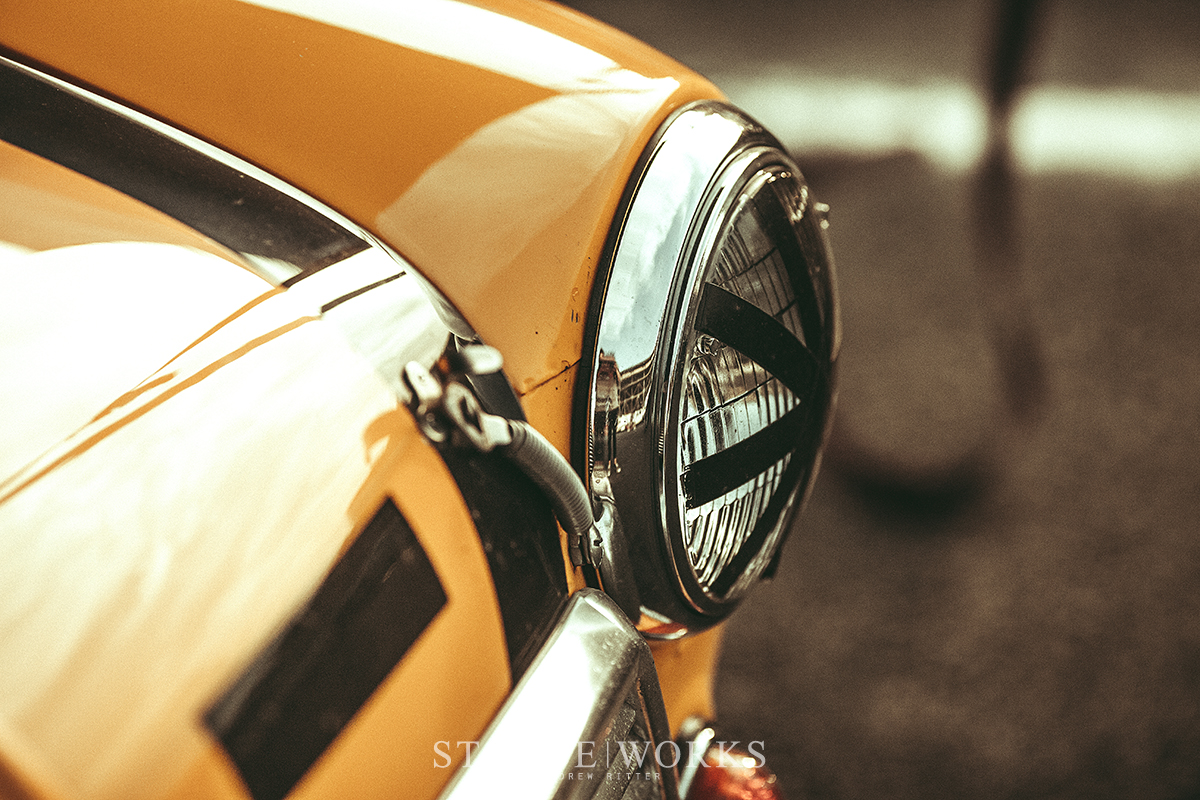 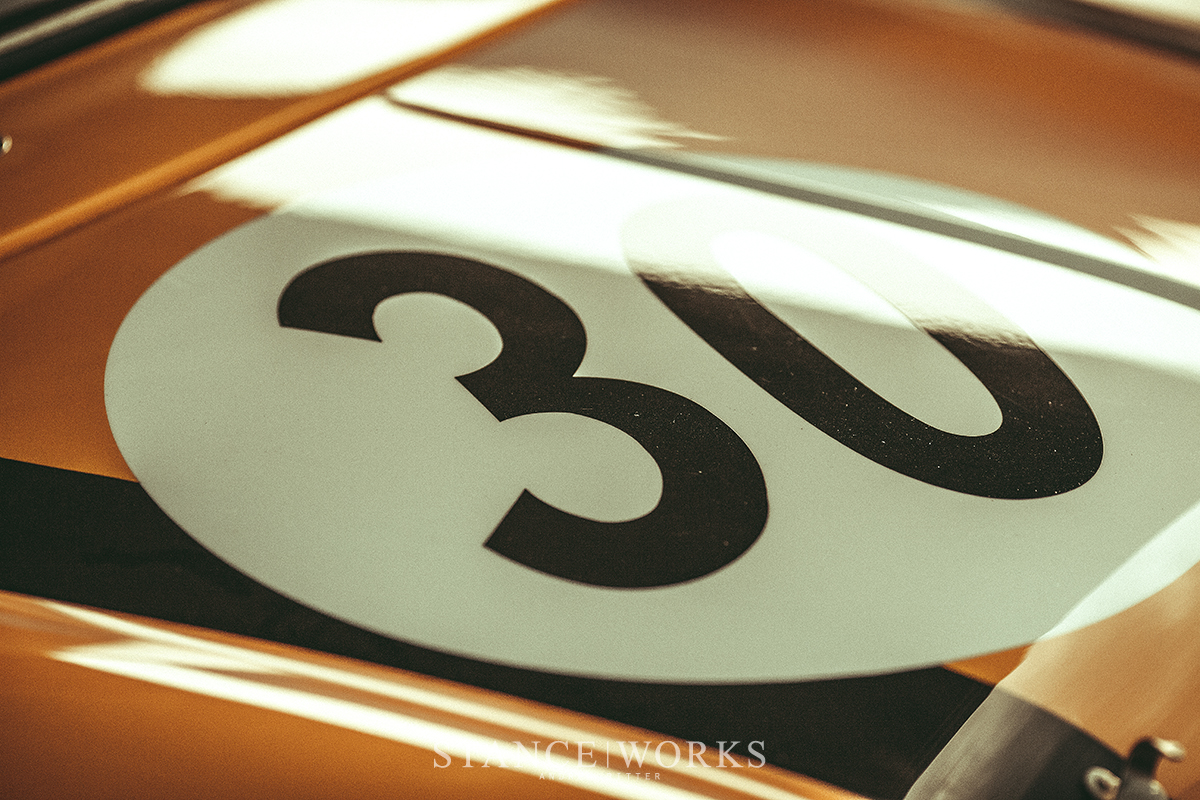 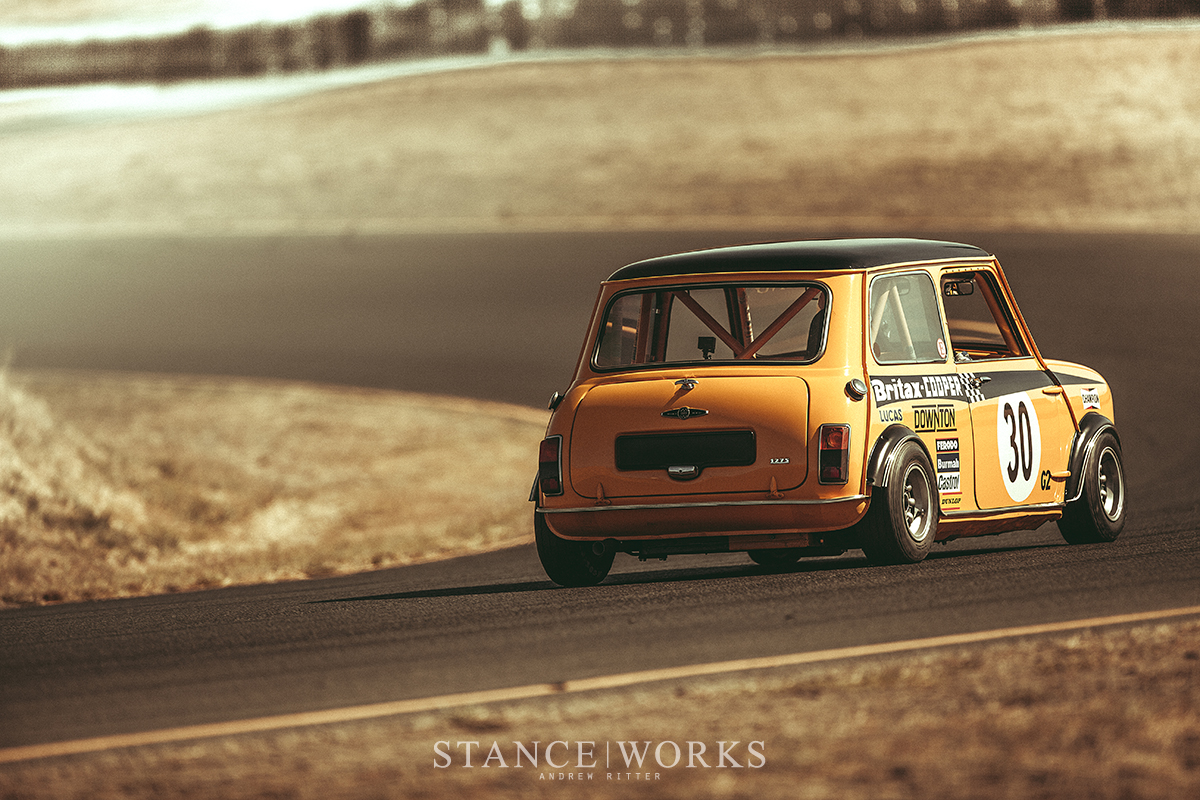 While the body flaws weren't enough to scare him away, they still stood as a significant hurdle to overcome. The Mini headed to El Toro, California to spend time under the knife at McLaren Unibody. Scott's friend, George McLaren, went to work and began to coax the steel back into shape. Employing new panels and plenty of metal coercion, George was able to fix the structural and cosmetic damage that once landed the car in the classified pages. From there, it went to Costa Mesa to have a full cage fabricated and welded in. Taking close to fiver years, the shell finally returned to Scott's home garage, straight and ready for its future in racing. Over the next 6 months, he put much of his focus into reconstructing the little car. With the original subframes reinforced and ready for track duty, adjustable suspension was bolted on to provide control of the alignment, integrating Heim and Rose Joints to remove unwanted play. Hi-Lo adjusters held Dunlop rubber cones in place and allowed height adjustments to hunker the car down. A set of shorter, adjustable Gaz shocks take account of the lower ride height and new geometry while settling the car over bumps.  Up front, Cooper S parts were sourced to convert from 7 inch disc brakes to 7.5 inch disc brakes and in the rear, the drums were retained but updated to meet the demands of racing. At each corner,  a 10x6 GB wheel wrapped in Hoosier's TD Vintage Race Tires were tucked into the proper Group 2 arches, giving it the stature that first caught my eye years later. 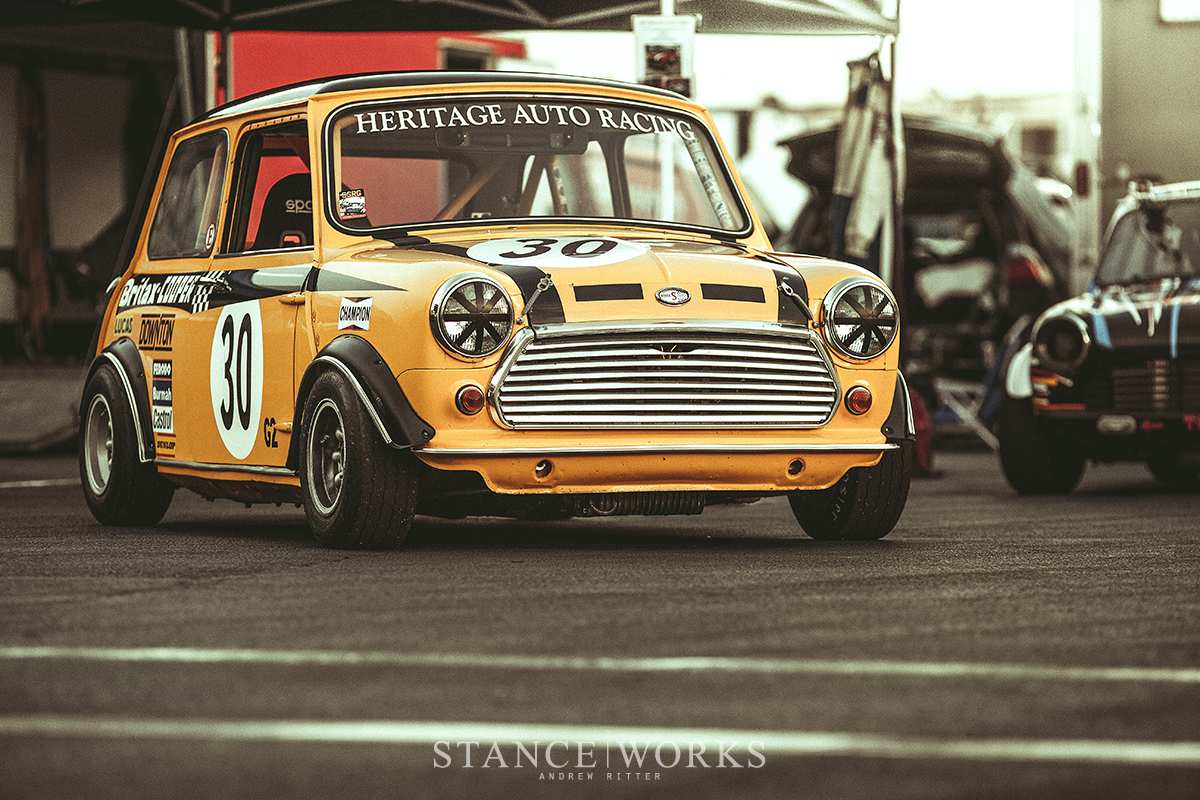 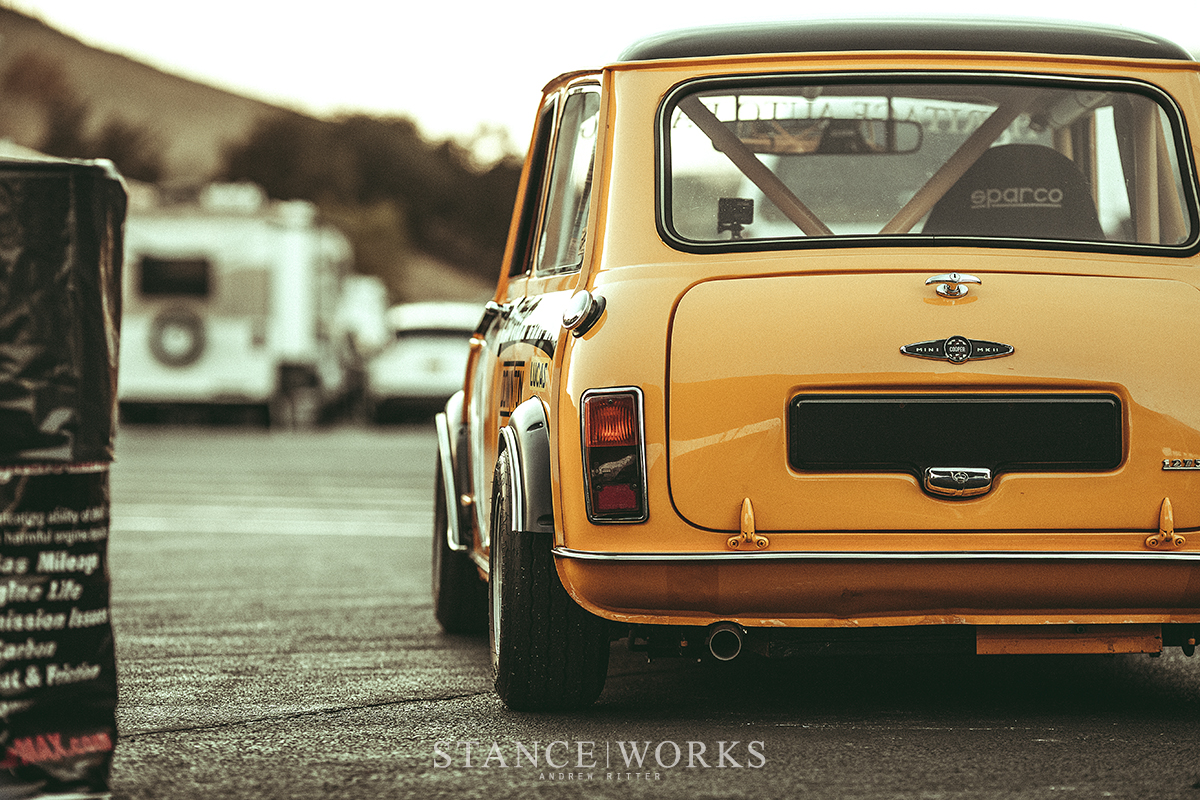 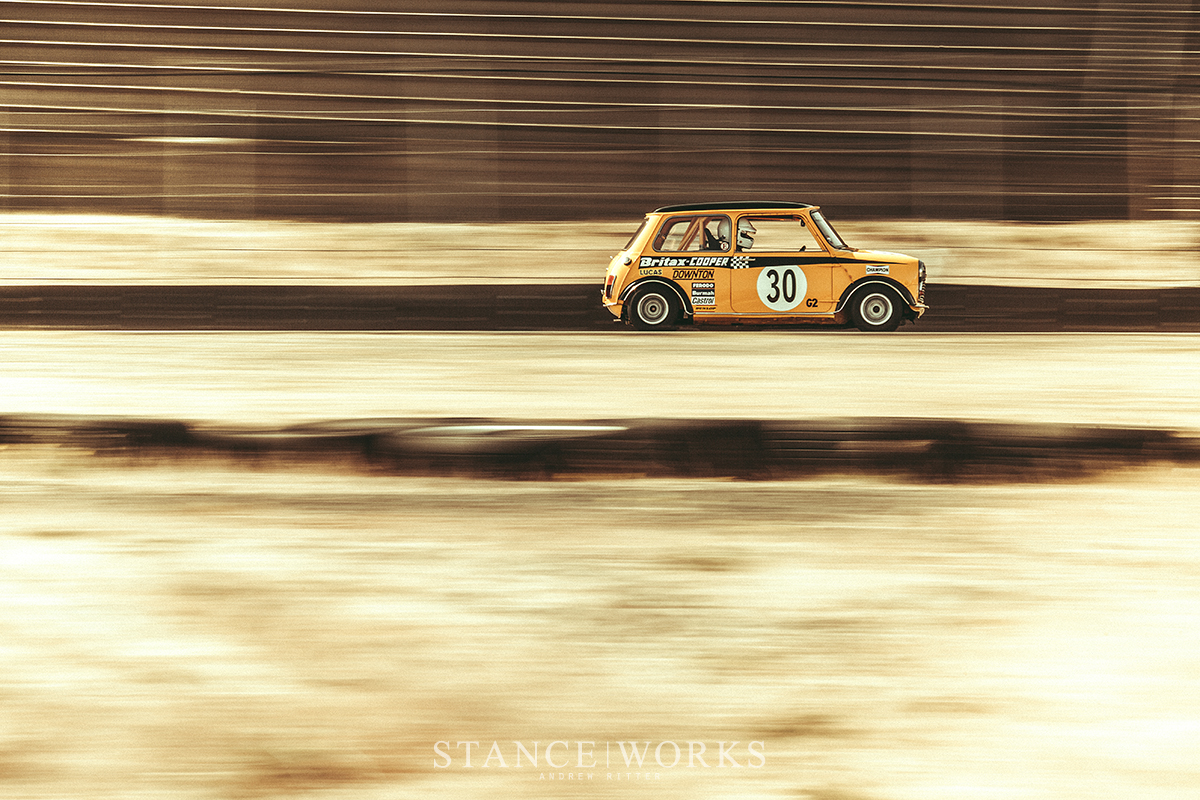 In the interior, a Sparco seat keeps Scott planted through the banked turns of Sonoma while modern tech-ready harnesses have been styled to appear like the old Britax harnesses of the 60s. The original Paddy Hopkirk steering wheel that came in the bent shell still does its duty navigating the car, and the roll cage holds a collage of race stickers from its busy career since its rebirth. Painted in a golden yellow, the exterior wouldn't be complete without the iconic branding that made the Britax cars stand out. Scott set out to mimic the graphics identically, so he turned to his collection of reference images and began the arduous process of replicating the old sponsor insignias. The result is a car that looks almost as if it had just finished up a lap at Crystal Palace in 1969 and landed on American soil to continue onward towards the podium. 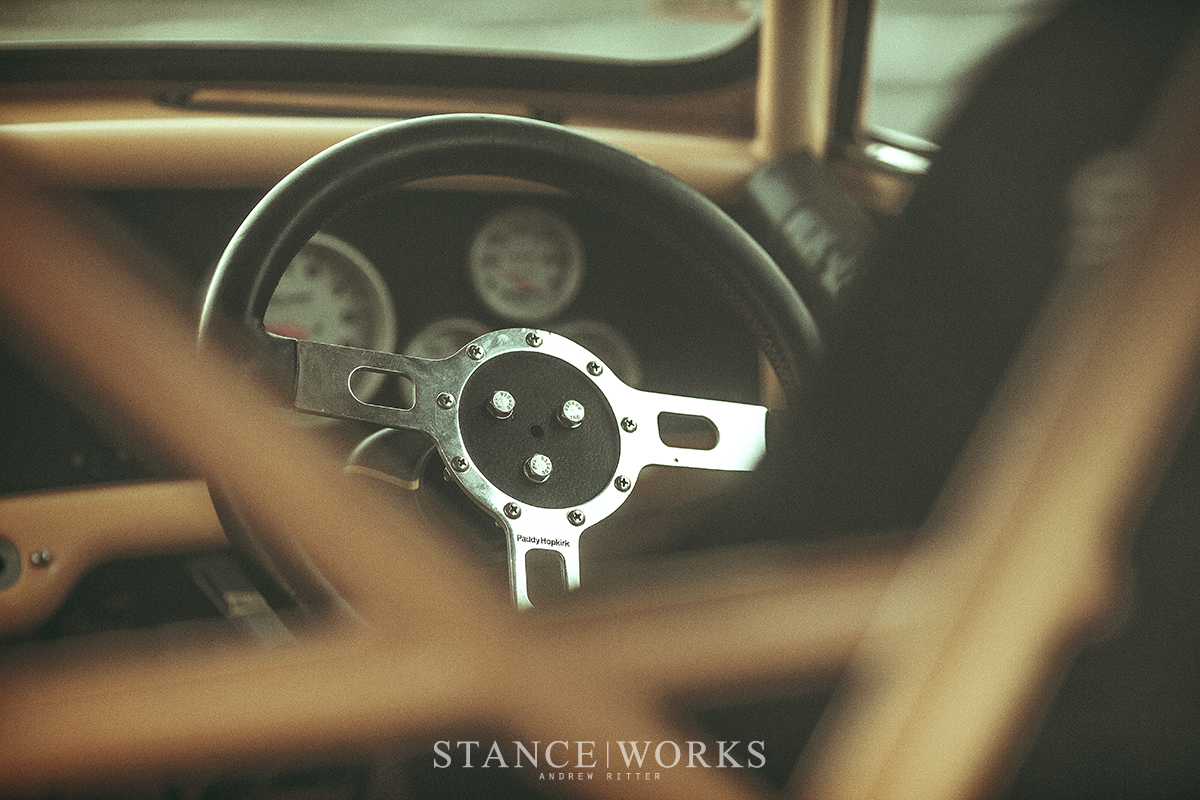 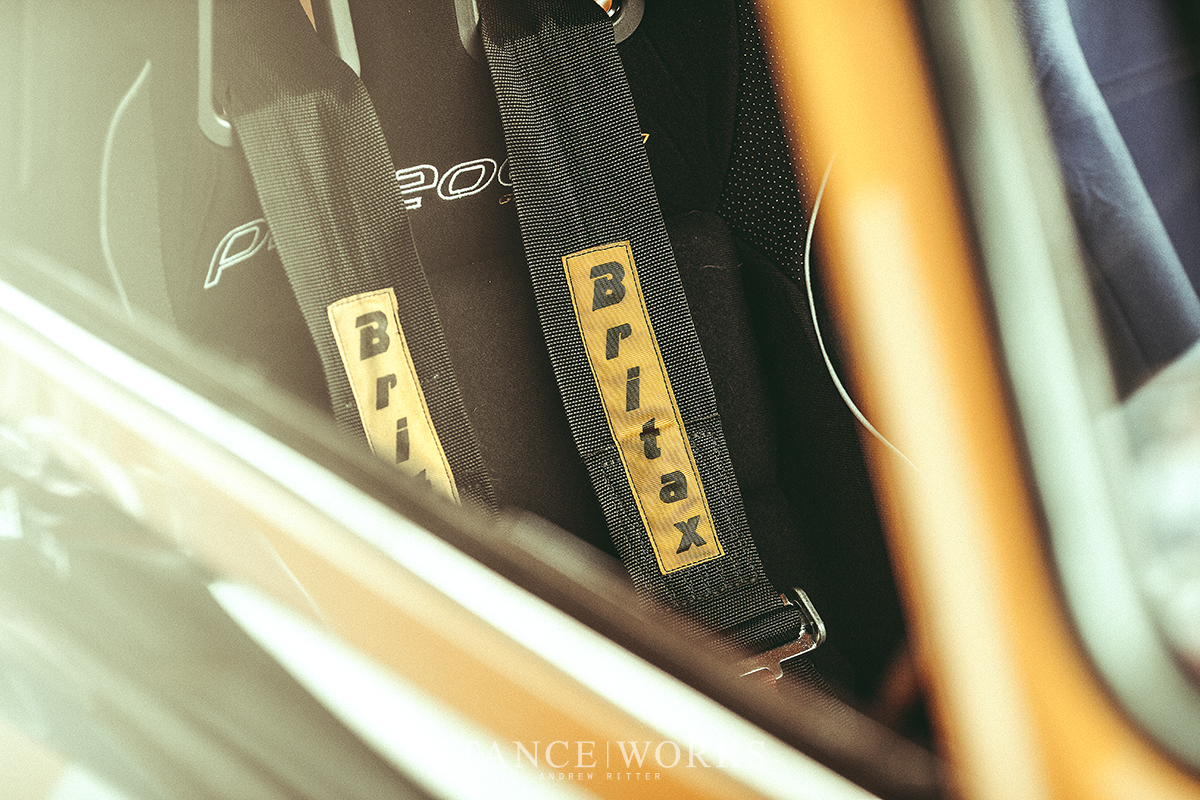 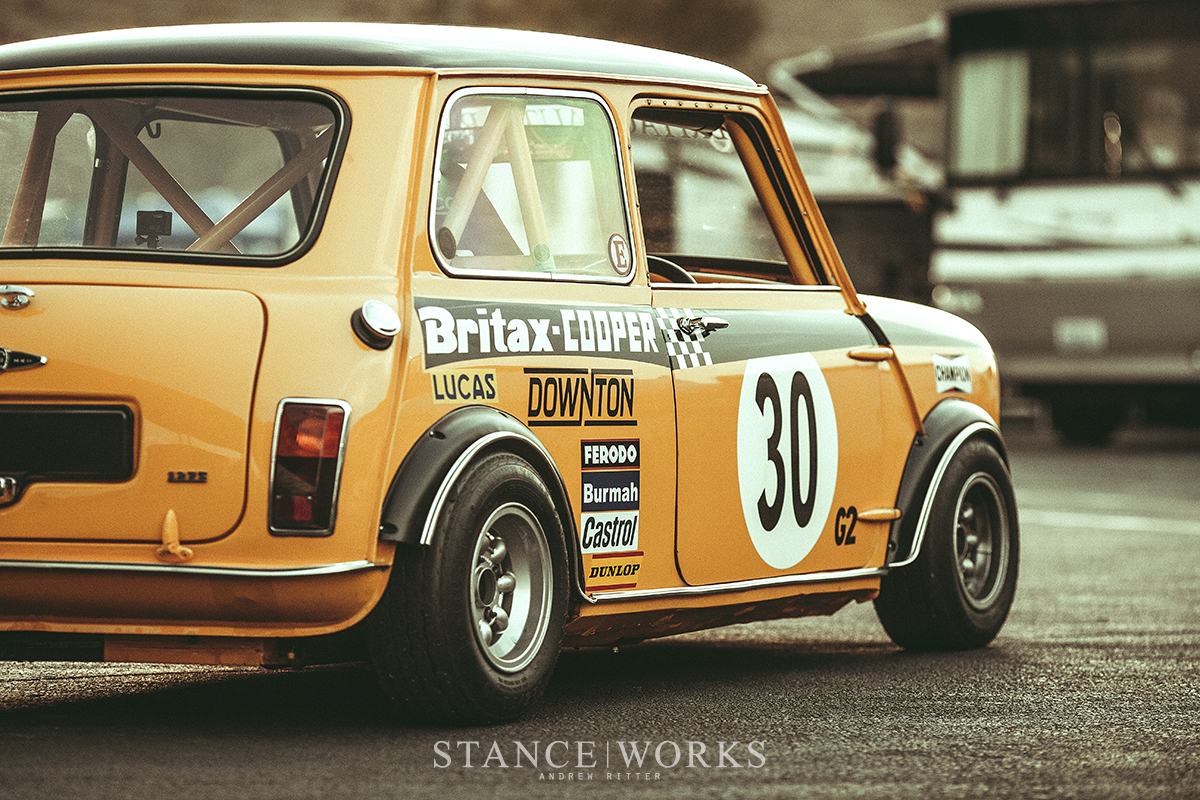 While the car certainly looked the part, Scott was determined to use it too. To start out, he only had a background in autocrossing, so Scott thought it wise to ease into it. Mating a race head to an otherwise stock 1275 engine, he began racing with VARA at the British Extravaganza in 2000, pushing a mere 80hp. With 5 races under his built an much more familiarity with his car's limits and potential, Scott turned to Graham Reid of Heritage Garage in Costa Mesa for a purpose-built engine. The team at Heritage bored a 1275 block out to 1380, making room for a new set of JE Pistons. The pistons would turn a fully-worked-over MED crank, situated in a transmission that housed straight cut gears and fed power through a Quaife LSD. Up top, 1.5 Titan Roller Rockers tick away on the Vmax Race Head which is held tight thanks to ARP Hardware. A Kevlar timing belt keeps it all working in unison, pushing out 105hp at the wheels on the dyno and about 130 at the crank...plenty of power when your car only tips the scale at 1,440 pounds. 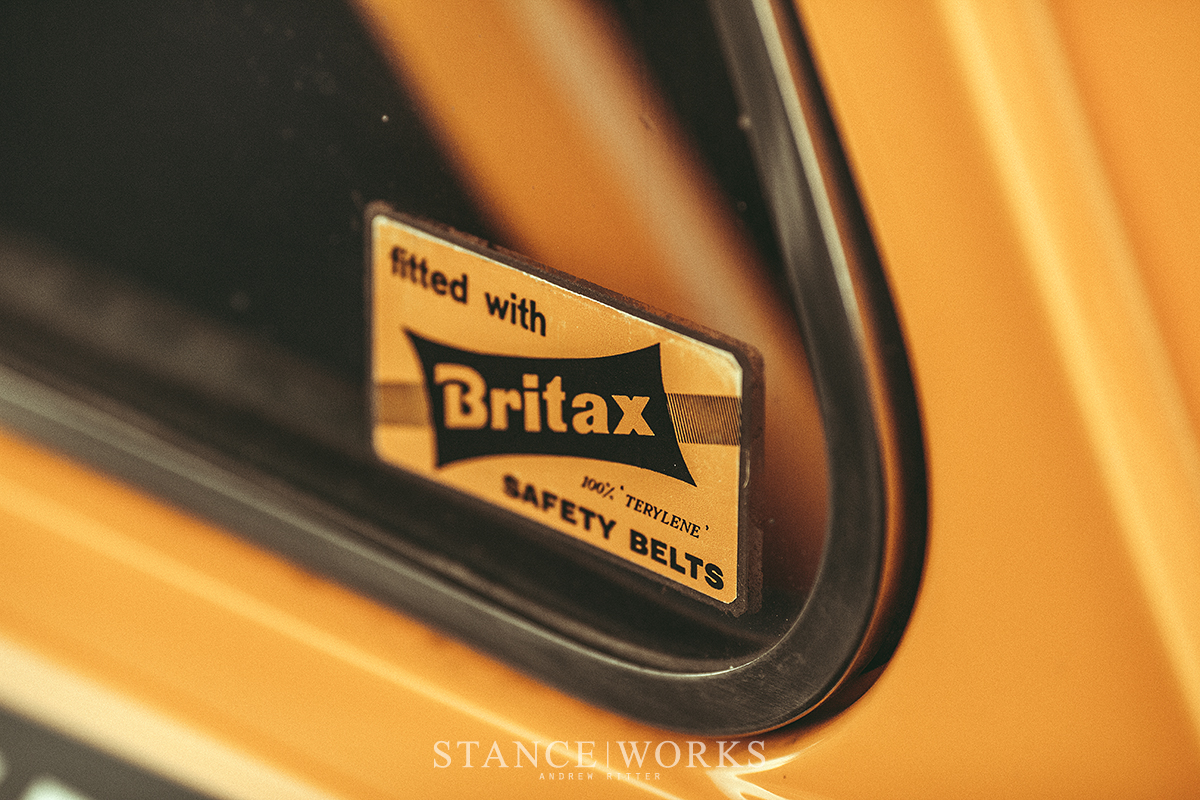 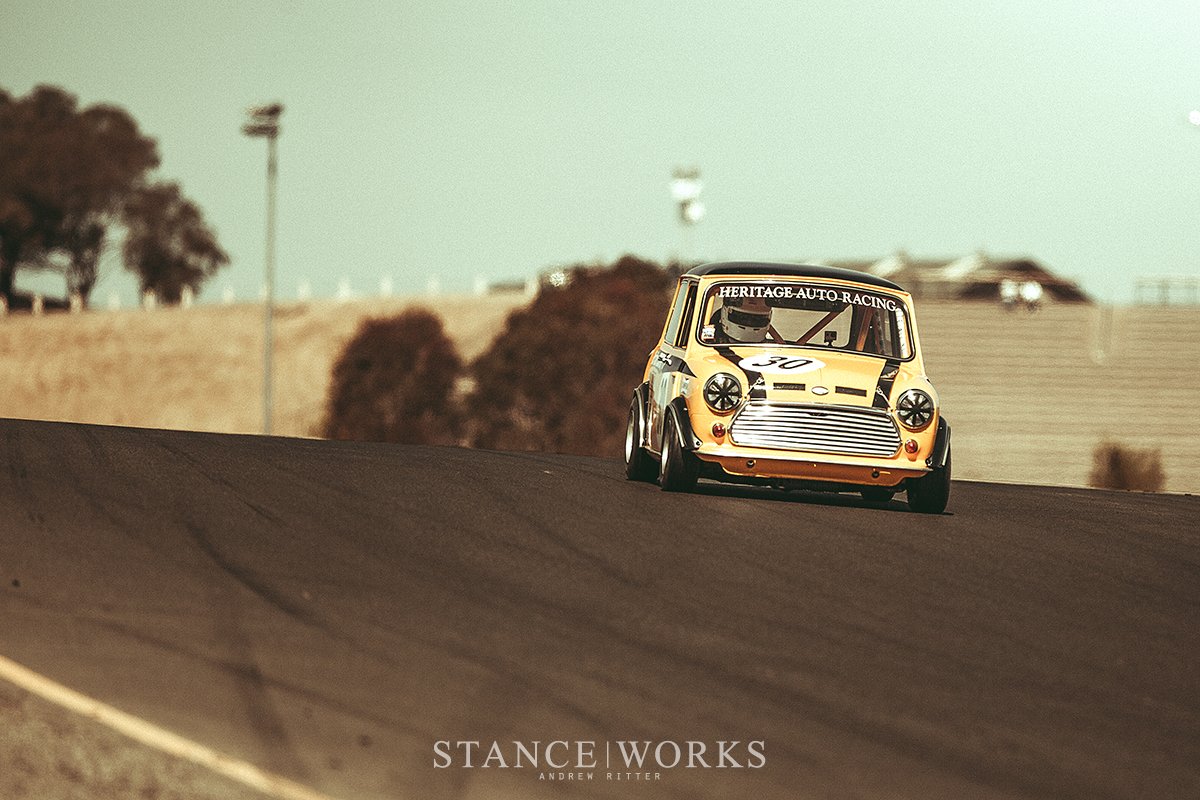 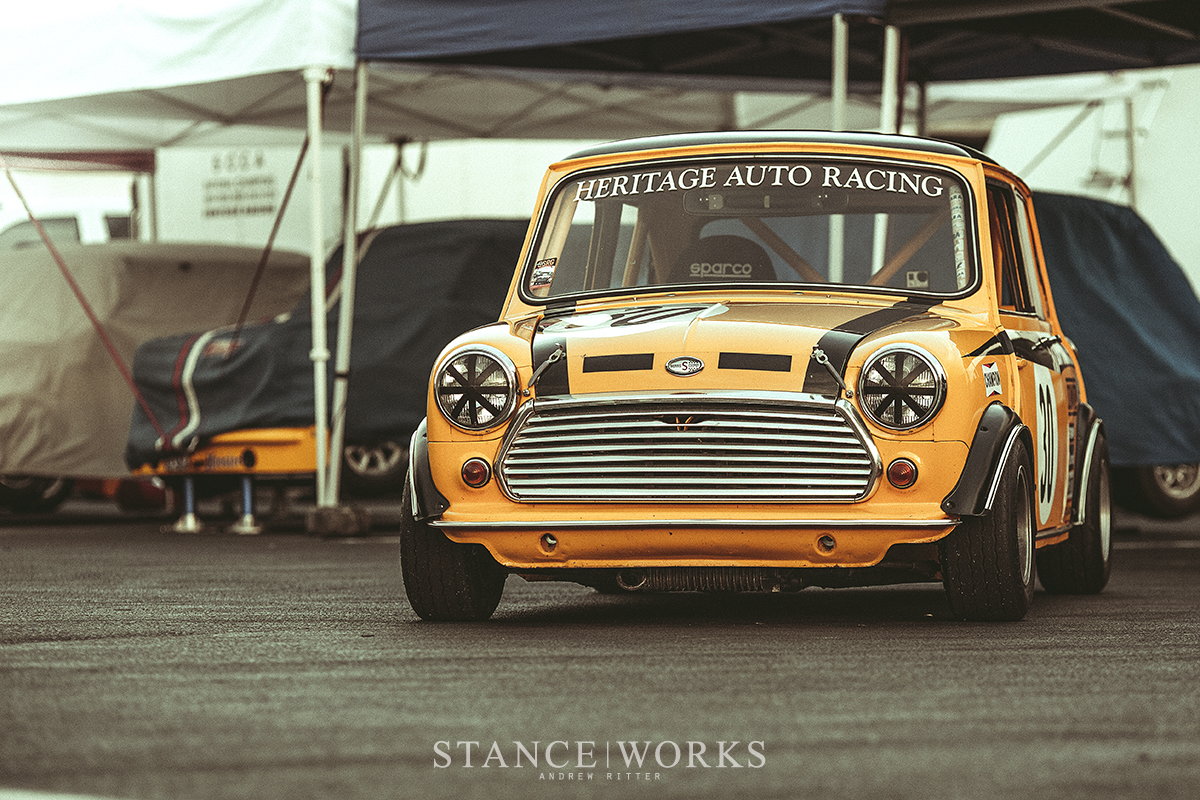 Chasing down gearbox woes, Graham eventually installed a Jack Knight dog leg transmission in the car in 2004, and since then the engine has run strong, completing 27 races with nothing more than a few checkups and a crankshaft dampener change. A testament to the benefits of experience and expertise when it comes to engine building, it's clear that Heritage's work was more than ready for the true test out on track. Though Scott took a break from racing for a while in between, he has filled his log book with a number of incredible races along the West coast. Laguna Seca, Sears, Buttonwillow, Thunderhill, California Speedway, Phoenix International Raceway, Las Vegas Road Course, Chuckwalla and Pacific Raceways in Seattle all hold memories for Scott and his Britax Cooper. Perhaps the most memorable though, was the first Mini Challenge in Monterey as he chased the other Minis down through the Corkscrew of Laguna Seca. Only his 10th race, Scott held his own with some of the greats and managed to earn 8th place out of 48 Minis. Now residing in the pacific Northwest, Scott is back behind the wheel racing. With plans to built a 1293 race engine to better fit the local organization's rules, he plans to keep it going, having fun and enjoying the comradery that comes with vintage racing. To build the race car of your dreams and then enjoy racing it for 18+ years stands as an inspiration for many of us as we pour our hearts into our classic cars. I look forward to bumping into Scott at a future California race and watching as the Britax Cooper buzzes around the apexes. 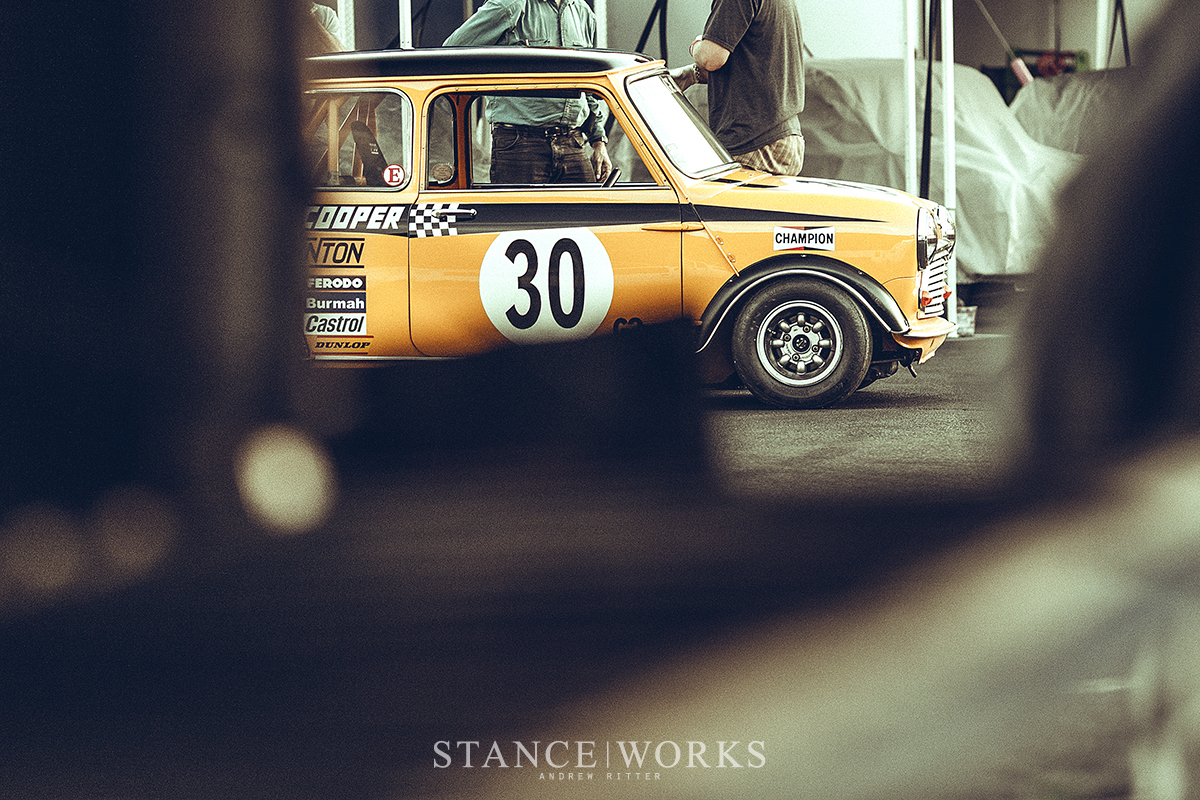 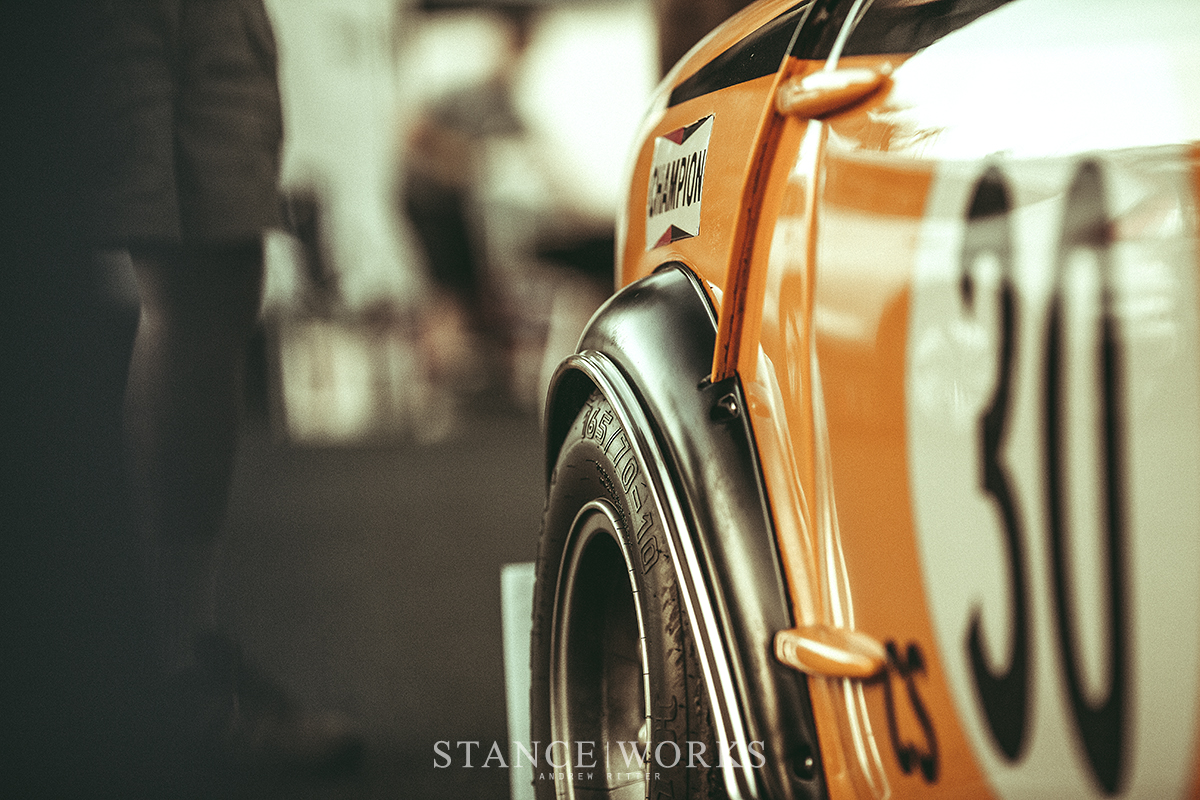 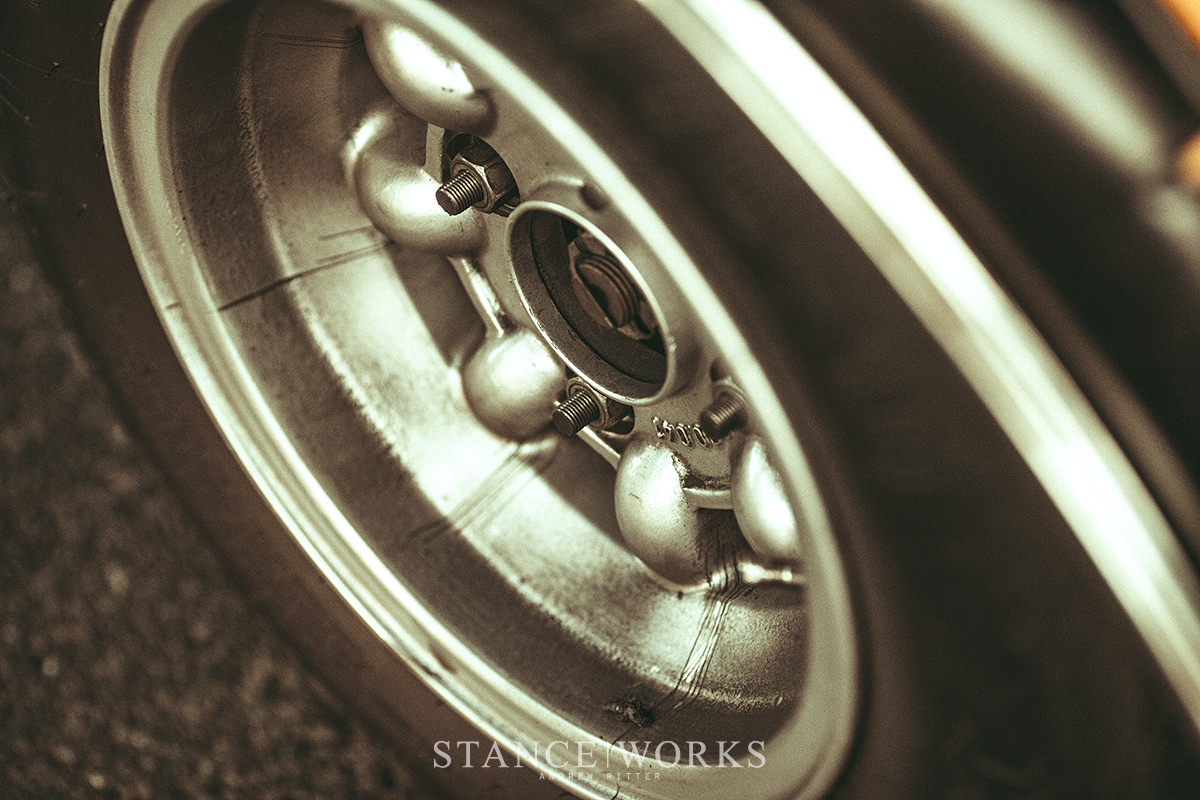 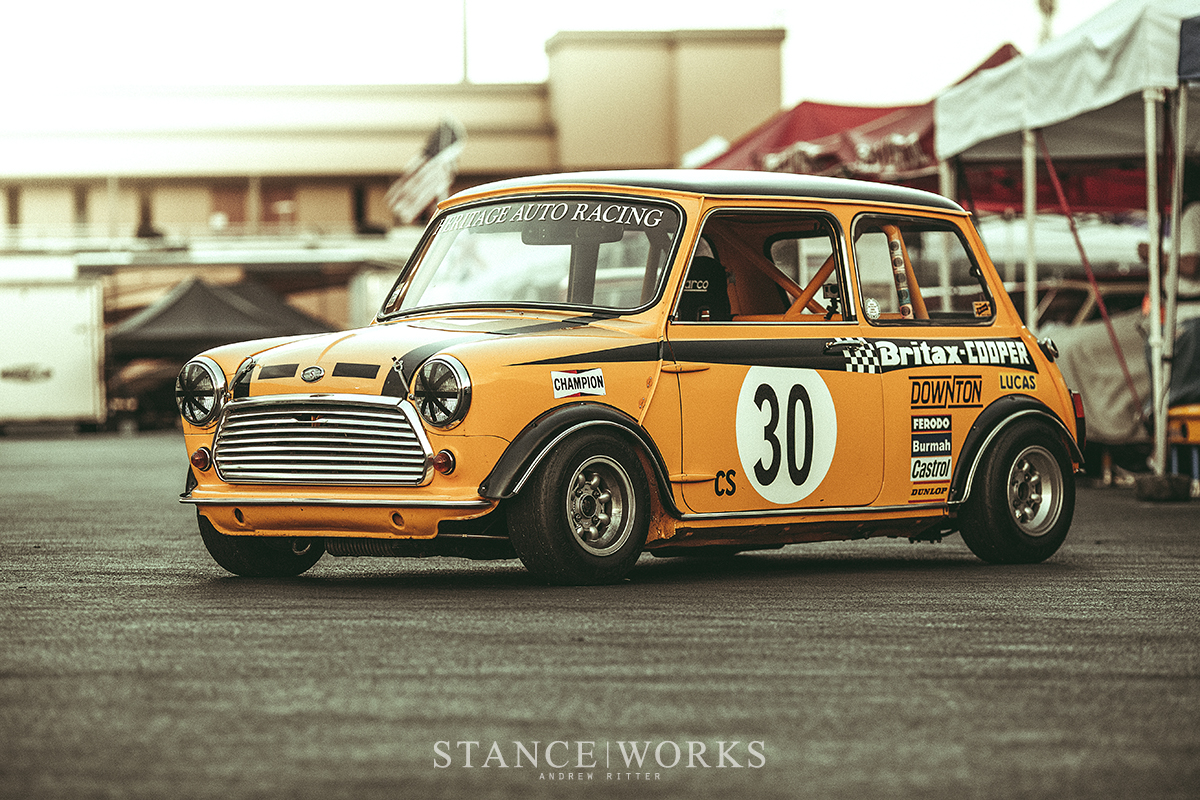 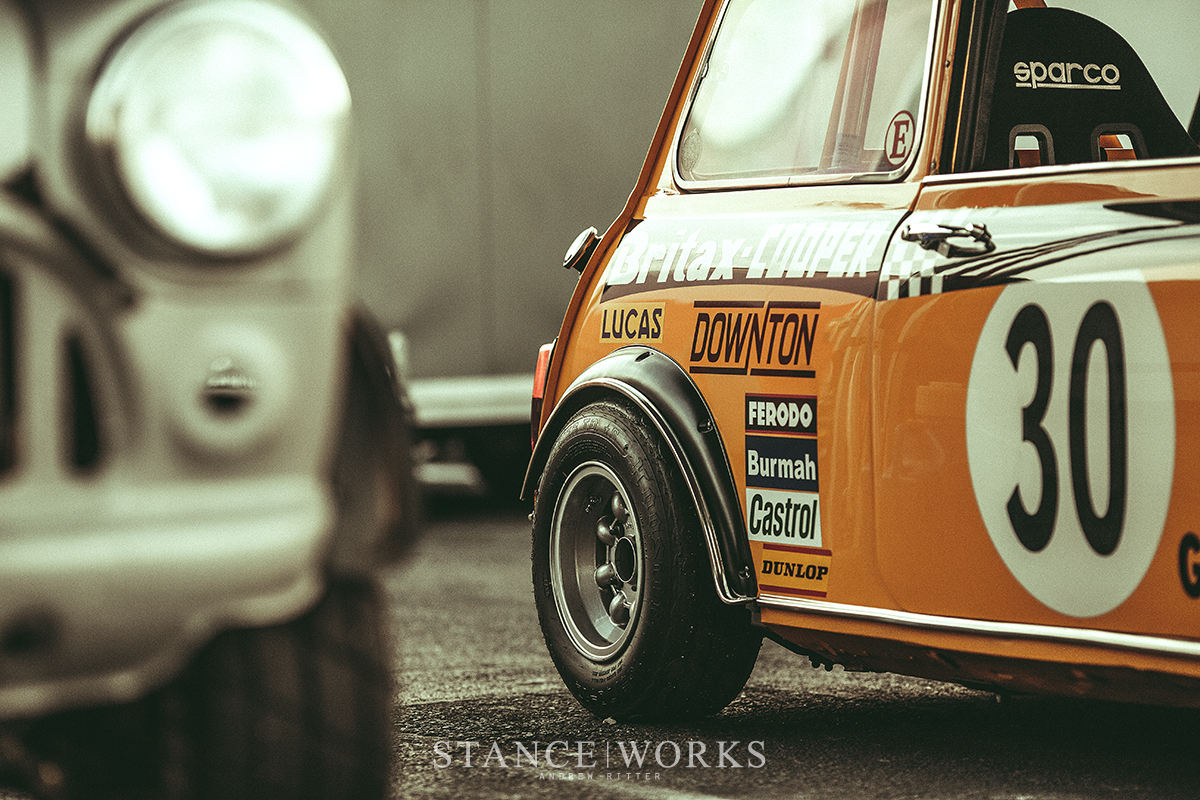 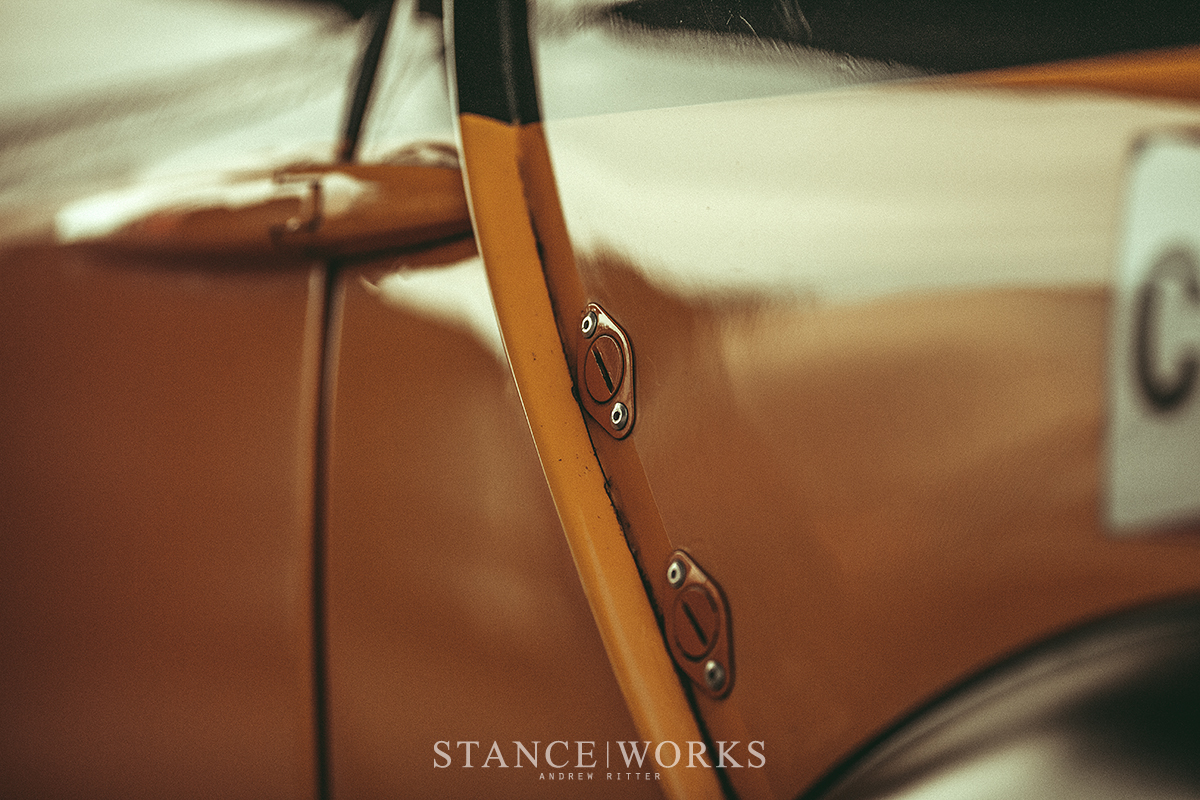 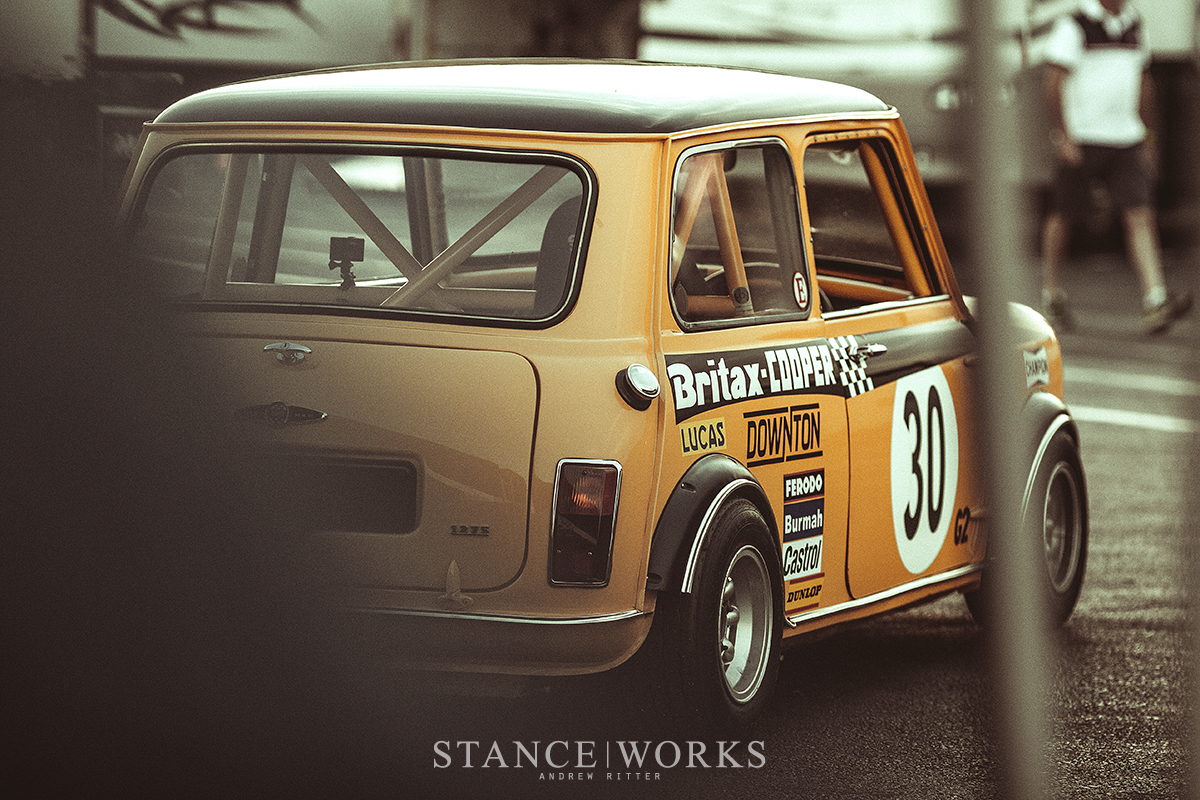 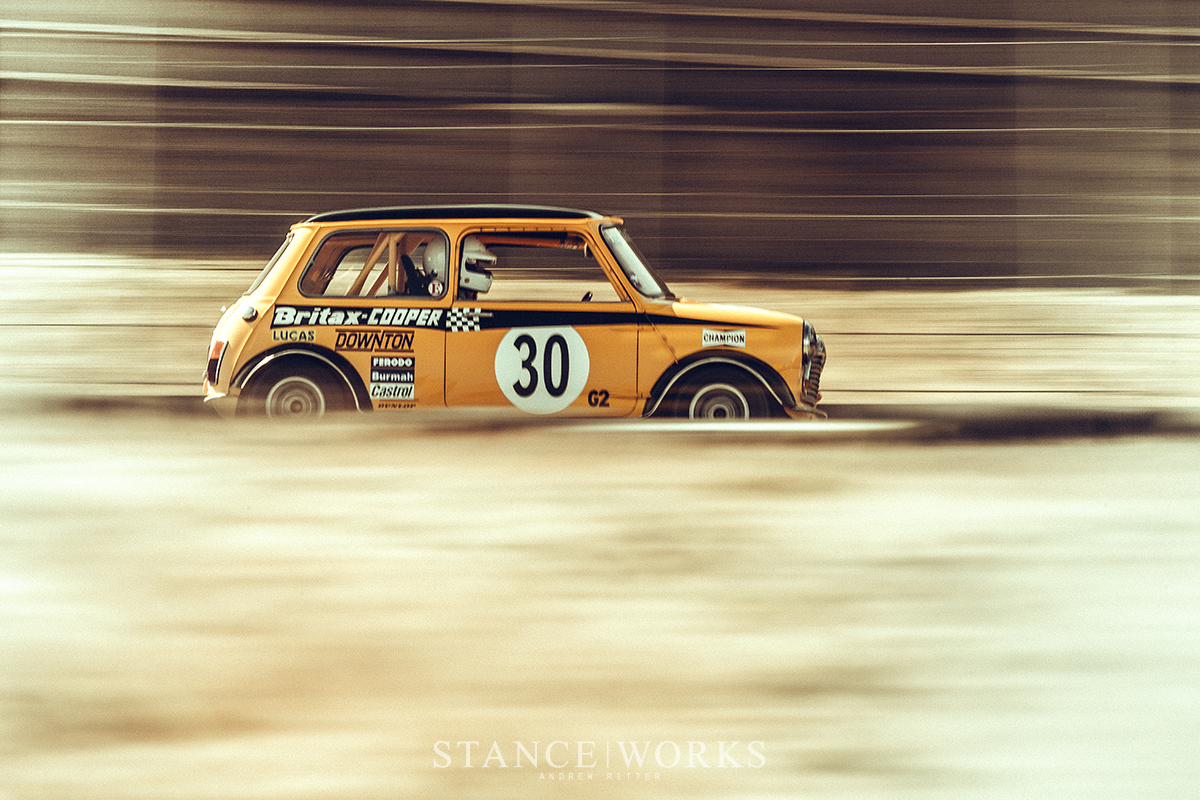 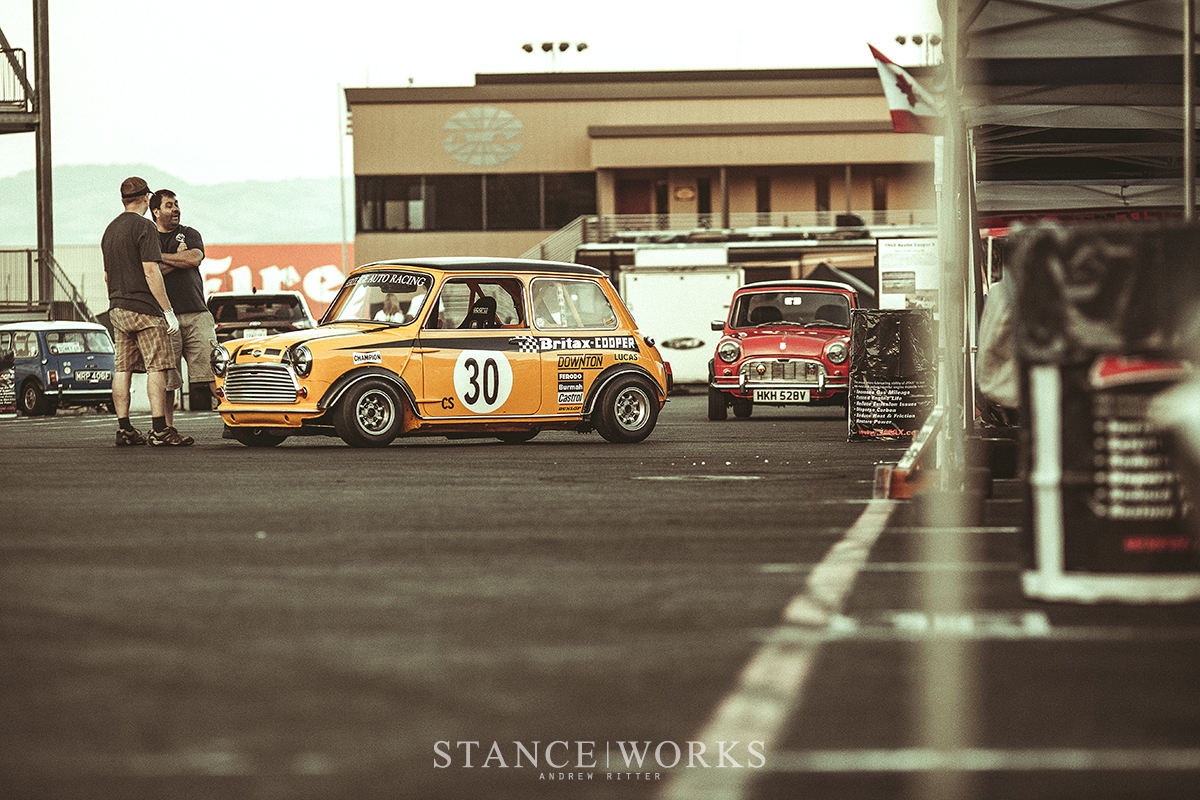 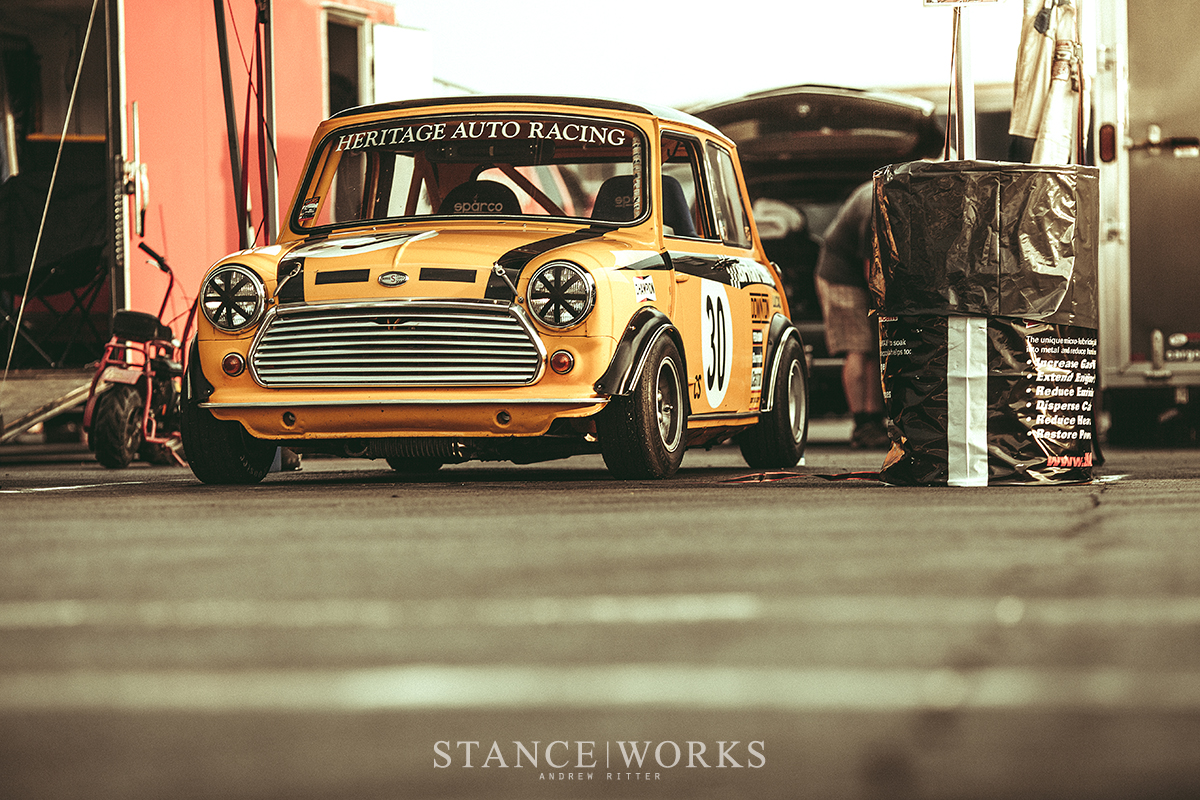