It was in a small wooden two-car garage nestled in a quiet Californian neighborhood that I found a revitalized excitement. Mike and I recently drove out to visit Jason and see the progress that he has been making on his 1980 MK1 VW Scirocco. I hadn't seen the car since its days sitting in the Rotiform warehouse, awaiting much deserved attention, but the build is reaching a point now where you can begin to imagine it sitting in the paddocks waiting for its turn on the course. As the sun set on another work day , we stood around the car and shared the stories that come with every build. The mistakes, the anticipation of parts' arrivals , and the trial and error of builds were all common threads in our recollections. These triumphs and tribulations are all part of the journey that you embark on when you set off on a new project, but it seemed like Jason was finally approaching his destination. 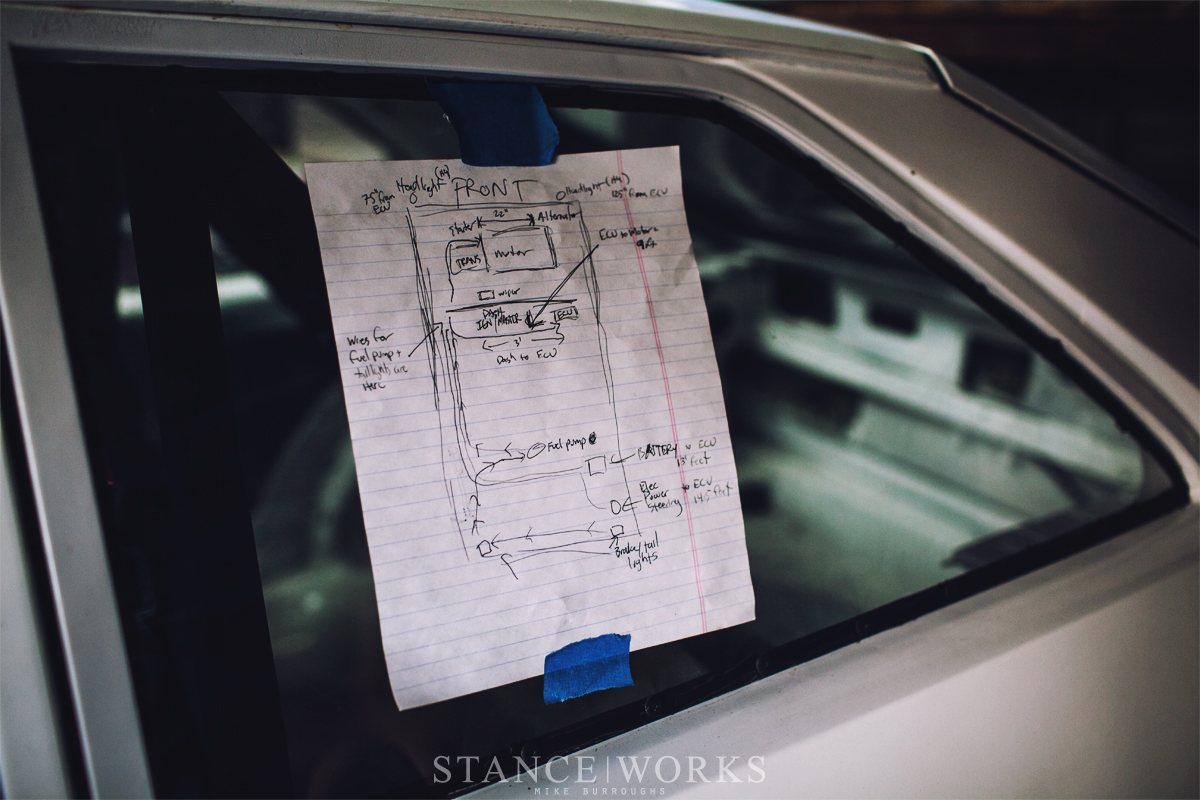 It all started a few years ago when Jason picked up an old Scirocco, outfitted with many of the necessary track essentials for a fun weekend car. Reasoning stood that with a simple stop at the gas station and some new tires, it'd be the perfect car for Jason to toss around the track, but like many well-intentioned car purchases, the simple to-do list quickly began to grow out of hand. When the set of Berg Cup flares arrived in a box from Germany, it was decided: the project was on its way down the slippery slope that we all know so well. 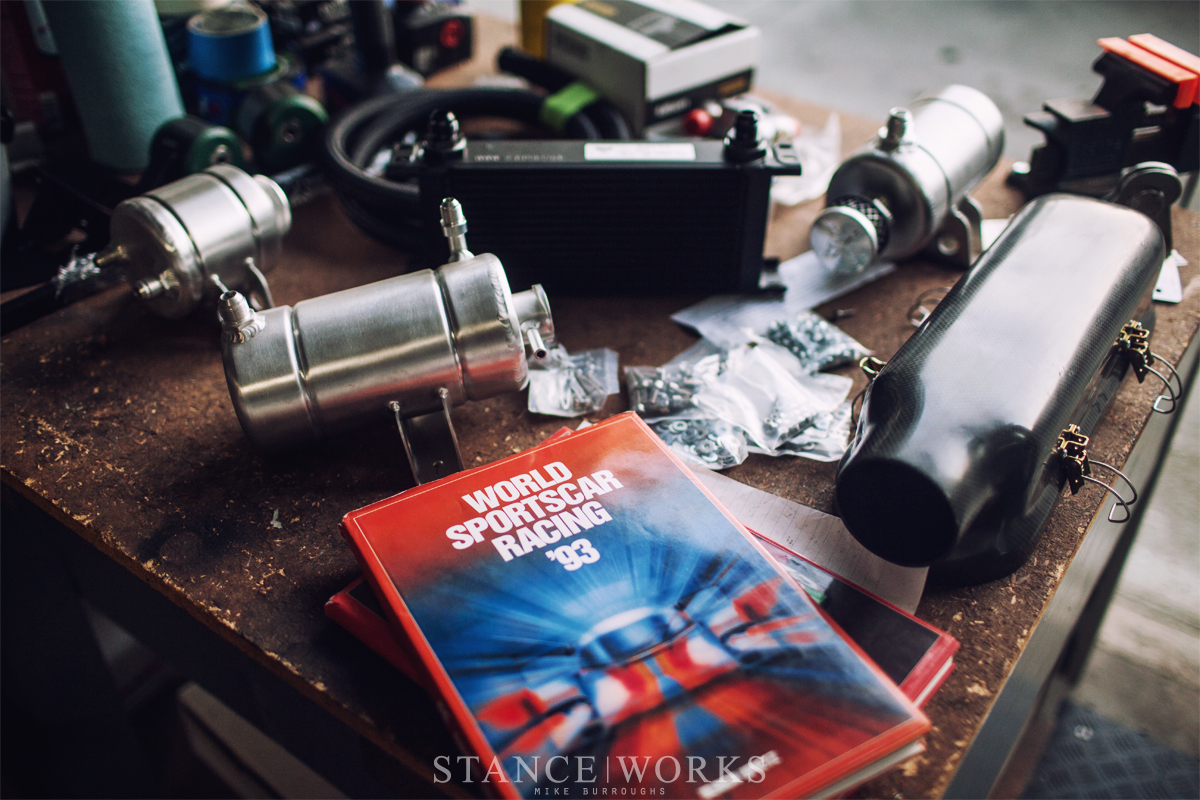 The Berg Cup series is one rife with truly impressive cars. Widebody variants of cars from the '70s, '80s, and '90s gather on the grid to climb the hills of Europe. Unbelievable sounds roar from the velocity stacks hidden behind their grills, and their low ride height hardly sways as they push the limits of traction up the hillclimb course. It's no wonder that Jason has pulled inspiration from the Gruppe H lineup and sourced a set of Scirocco Berg Cup flares and the accompanying air dam. It's styling that dates back to some of the best years of racing with its "wider, lower, faster" mentality, and it's what has me so excited too see this car reach completion. 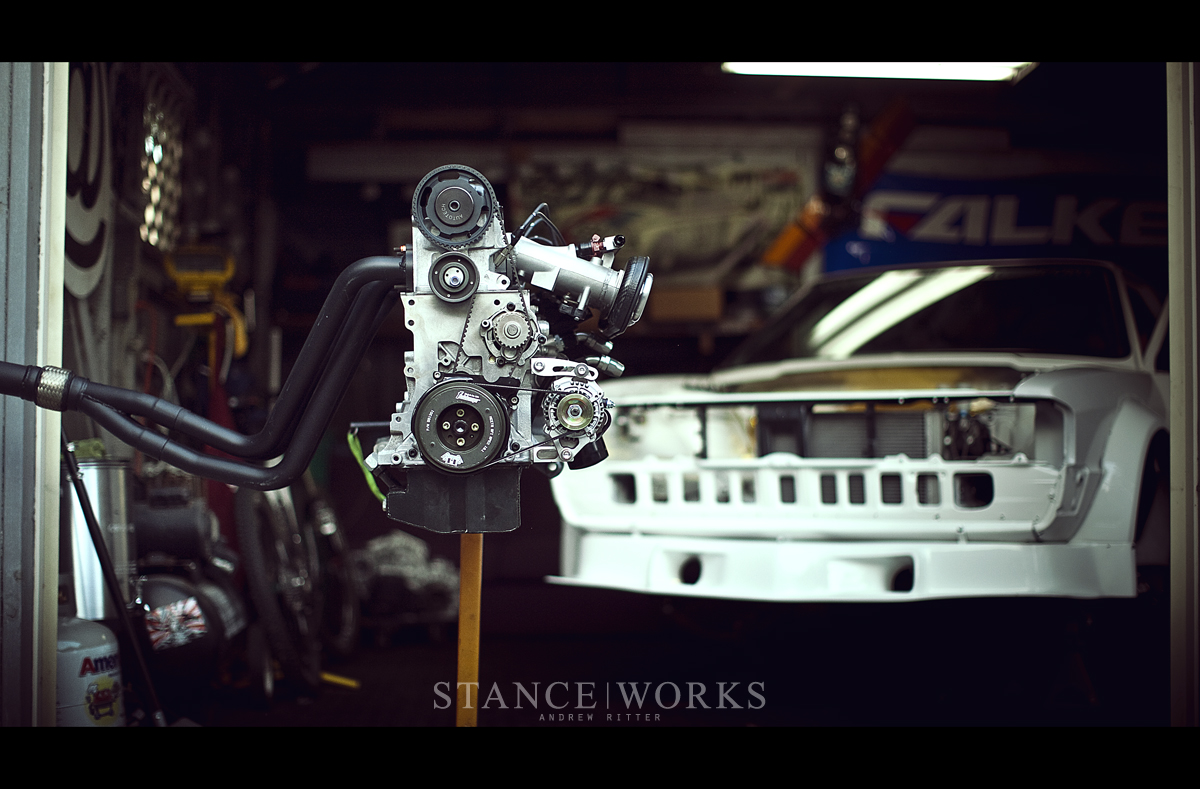 Flares were only part of the equation; Jason knew what had to be done when he found a pair of old, tired USF3 engines in the midwest. The United States Formula 3 Championship, was an open-wheeled race series campaigned by SCCA in 2000 and 2001. Despite its short run, it left a strong legacy with the Volkswagen USF3 engines that were used to power the Dallara F399s around the various road courses. Built by Bertils Racing Engines, the USF3 put out a respectable 199.9HP@7200RPM, but according to the builder, Bertil Sollenskag, the engines were heavily undertuned in competition spec to ensure series longevity and driver safety. With a vote of confidence such as that from the engine builder himself and a history in racing, the USF3 engine was the perfect selection for Jason's car. 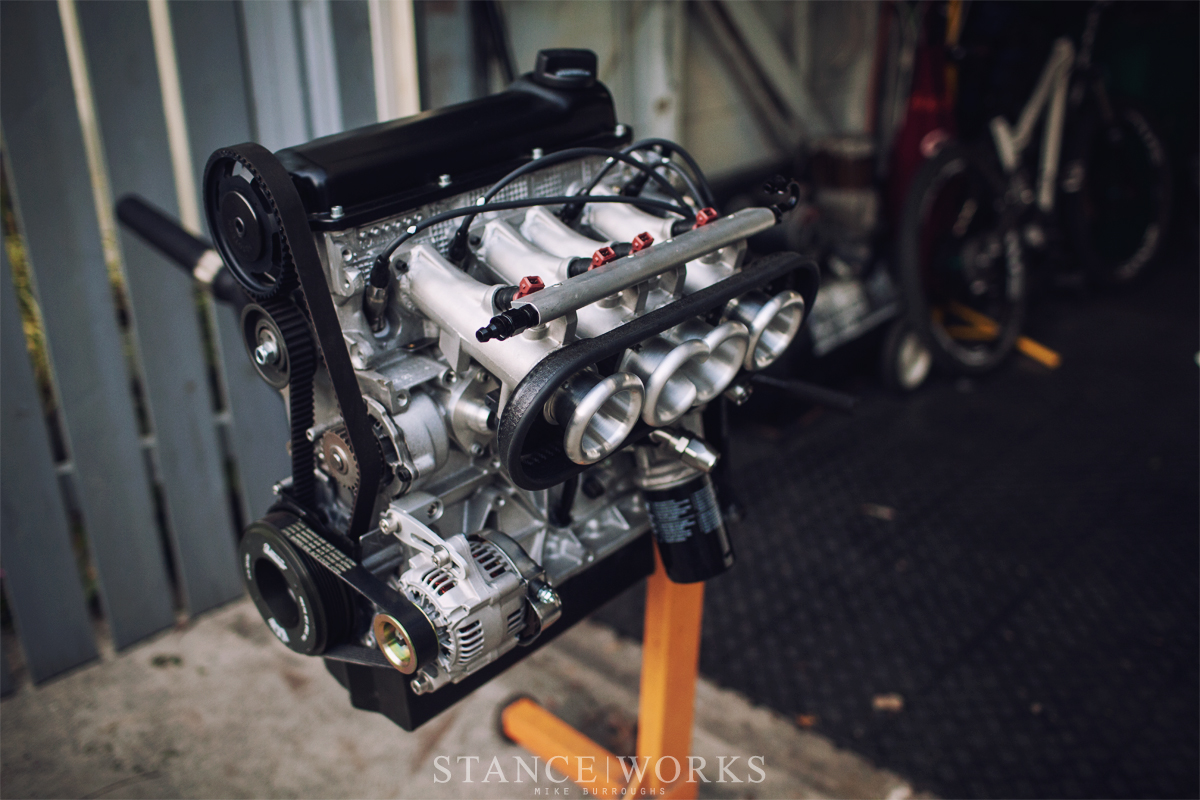 When the series was cancelled in 2002, the engines were forced into early retirement, pushed into the back corners of race shops across the country. With two engines in his possesion, he began to disassemble them and collect the parts needed to build one solid USF3 for his Berg Cup MK1 Scirocco build. The long trumpeted intake and the Bertils treated cylinder head were the two holy grail parts he had really sought out, so parts from the bottom end such as the dry sump kits were sold off to fund the rebuild. INA Engineering sourced a rare alloy block to replace the heavy iron and shed 80 pounds off of the front end. 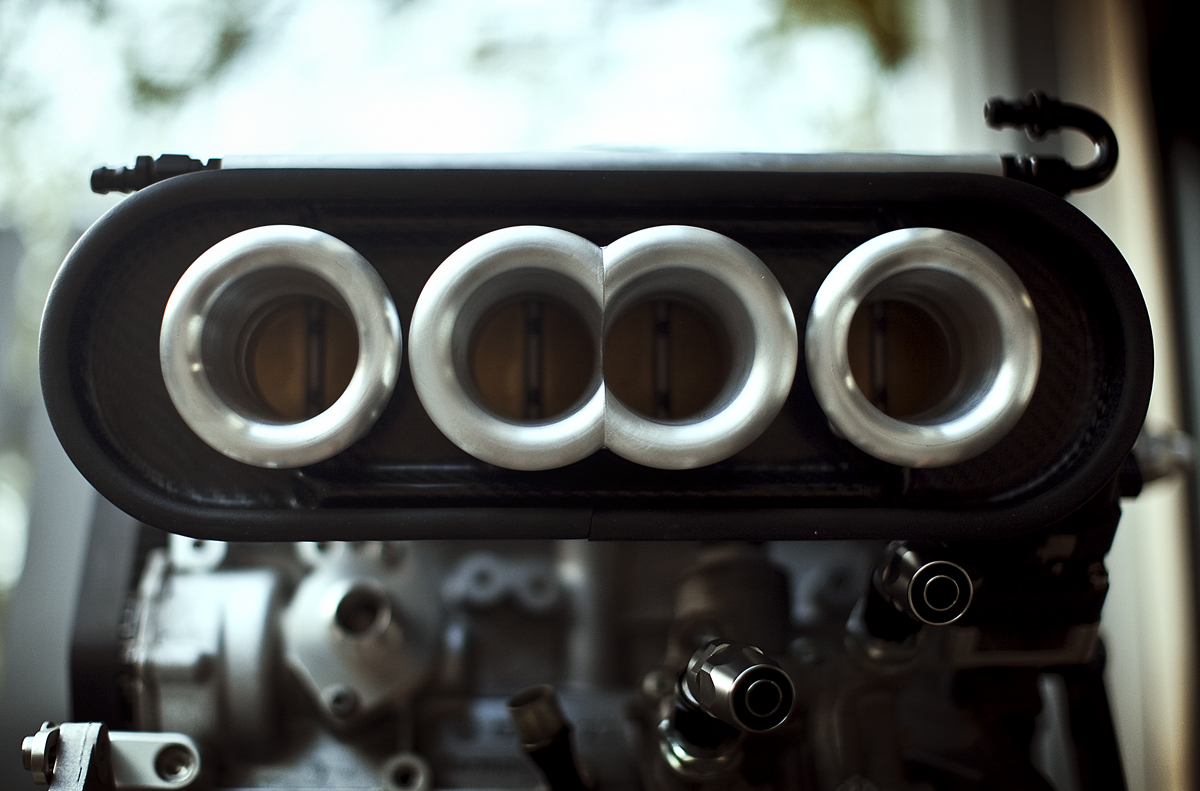 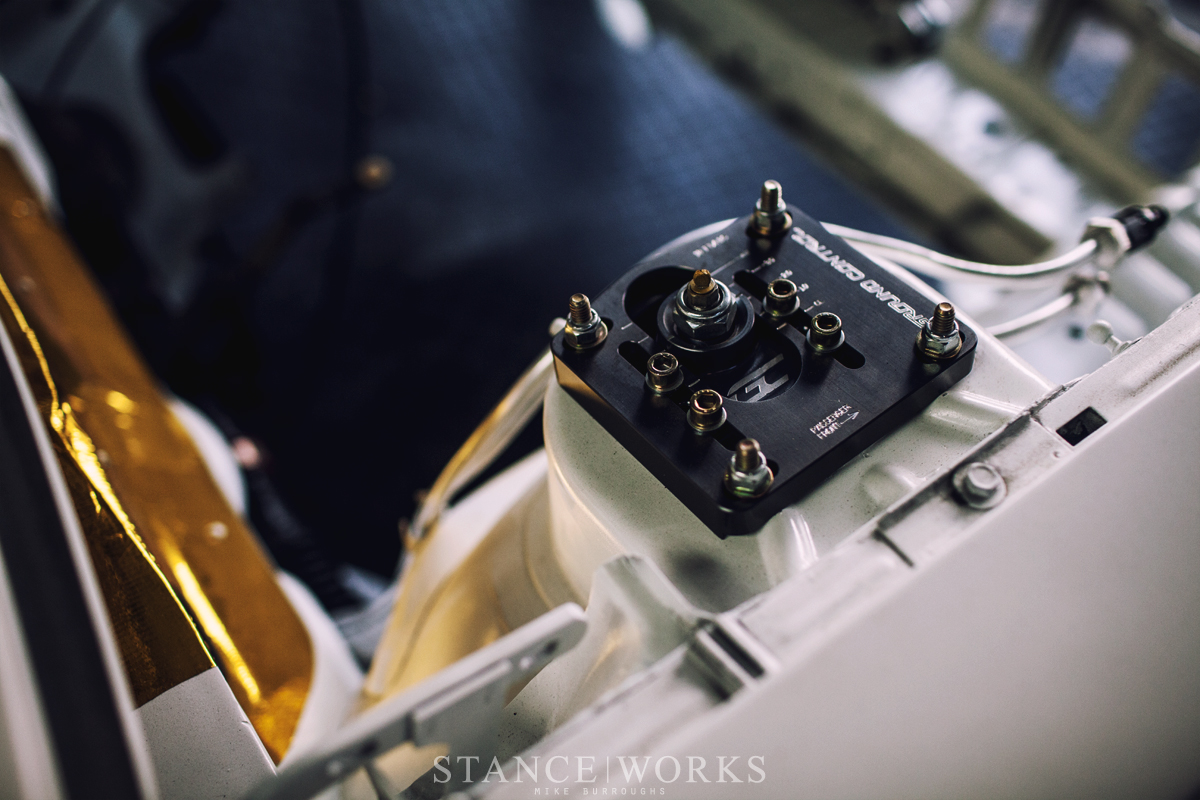 As mentioned earlier, no project comes without a few hurdles. The USF3 engines were originally built to be housed longititudinaly behind the driver of the Dallara F399 where the intake plenum could potrude from the aerodynamic body of the open wheel racer. Once Jason had test fitted the engine in its new transverse location in the Scirocco's bay, it quickly became apparent that the angle of the intake manifold would interfere with hood clearance. Unwilling to cut into the hood , Jason had the intake cut, shortened, and welded at a new angle to accomodate the limited space and ensure there'd be room for the airbox. 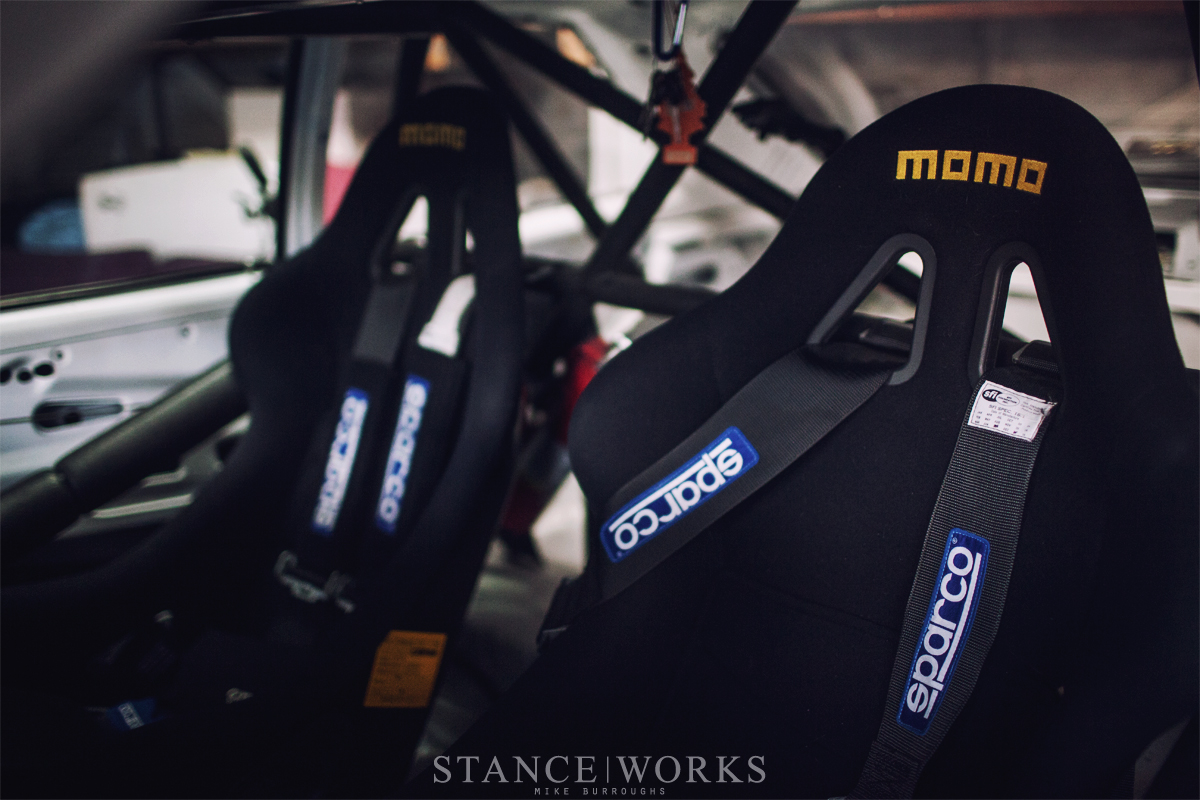 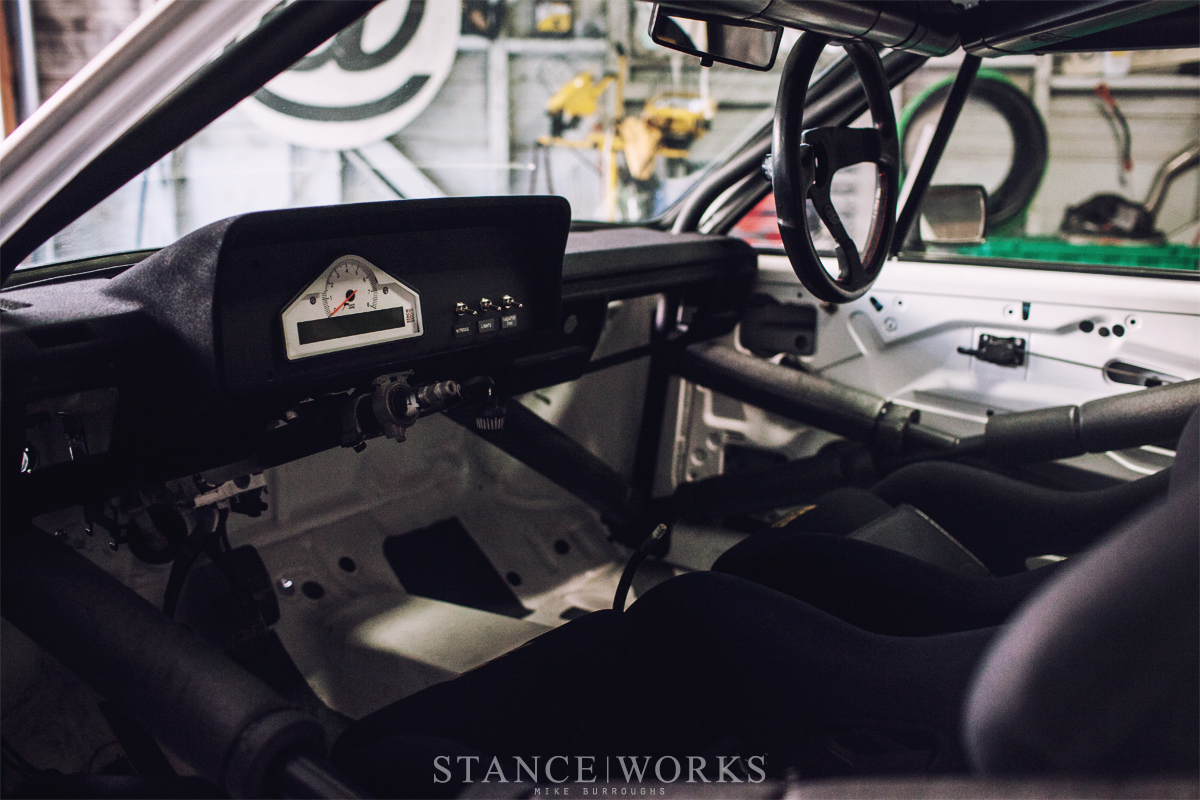 The altered angle of the intake meant that the space under them became even more limited for the various ancillaries that would still need to be fitted, but it's these small challenges that keep Jason interested and beckon him back to small wooden garage behind his home whenever he can find time. As one of the guys behind the ever-growing Rotiform wheel company and a new father, free time is limited, but he cherishes the moments that he can step out after dinner and enjoy a beer while problem solving the next step in the build. The build has moved at a slow and steady pace, but it's quickly approaching the point of completion and we'll be there to watch as it comes together.