Upbringing plays an important role in how individual interests are developed. What you are raised around, like it or not, strongly influences what you end up passionate about, whether it be towards or against. We all develop unique interests and personal taste, but the apple tends to not fall too far from the tree. Mike McKinney's history with Fords begins back in 1986 when he acquired a 1st generation Ranger, a chassis that he still owns to this current day. However, that is not the truck that sits before you.  Mike loved his Ranger, and still does, but he always had a desire to build something a bit less common, and the Ford Courier caught his eye early on. He looked for one on and off, no easy task in West Virginia where most cars are plagued with rot, but time went by and the intensity of the search died off, into nothing more than a passing thought, until one afternoon where luck was on his side. 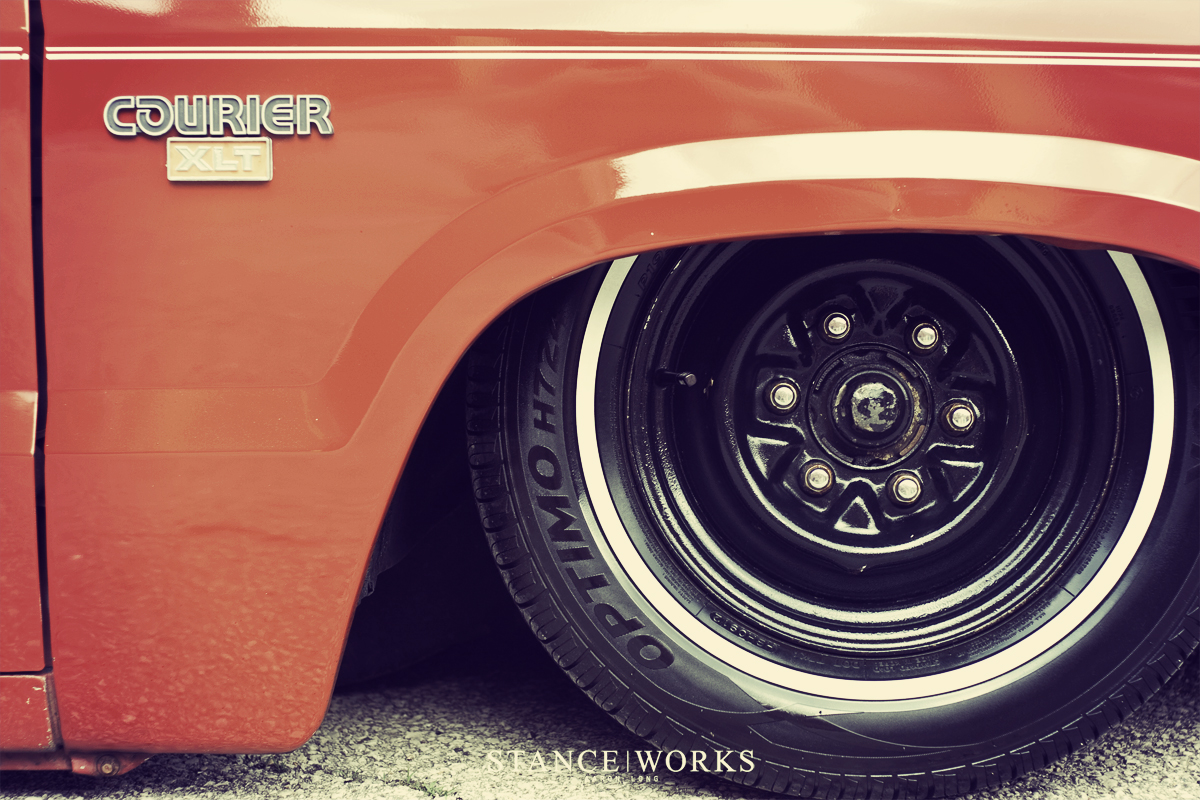 A little over 9 years in total after the search began, he came across a Courier sitting in front of a local house with a for sale sign attached. Mike immediately pulled off to look at the car, and as he approached and saw a clean chassis and a modest asking price of just $500. He knew this was the one. He rushed up to the gentleman’s door and  informed him that the truck was sold, and to please wait for him while he ran to a local ATM, barely leaving the owner time to ask “you don’t wanna hear it run first?”. Mike knew this was the truck he needed, running or not. But as chance would have it, it was $500 well spent; the 2.3-liter 4-cylinder motor purred right along, allowing him to drive the truck home. Ecstatic that he had finally found “the one”, Mike worked out a plan for the path the truck would take that was modest, but a long time coming. 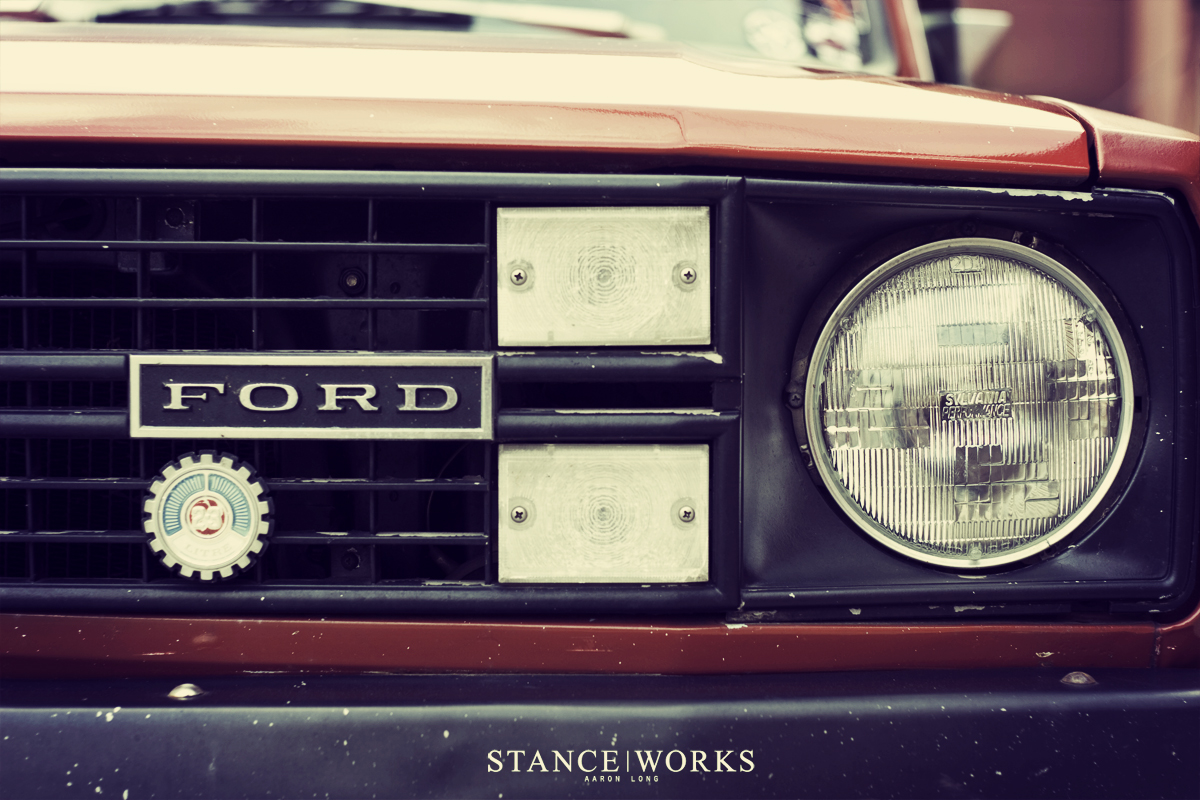 The first thing to tackle was, of course, how to get the car friendly with the pavement. Considering this was still going to be used daily as a parts runner, air suspension was chosen. Getting a truck to lay out isn’t as simple as most unibody cars, and requires more than simply bolting in a made to order strut kit. That said, the front of the Courier is straightforward, requiring only custom made brackets for the bags to allow the front of the truck to sit down. Mike, knowing the Ford would see daily use, fabbed up custom shock mounts, and utilized shocks, something that is not always done in the mini-truck community. 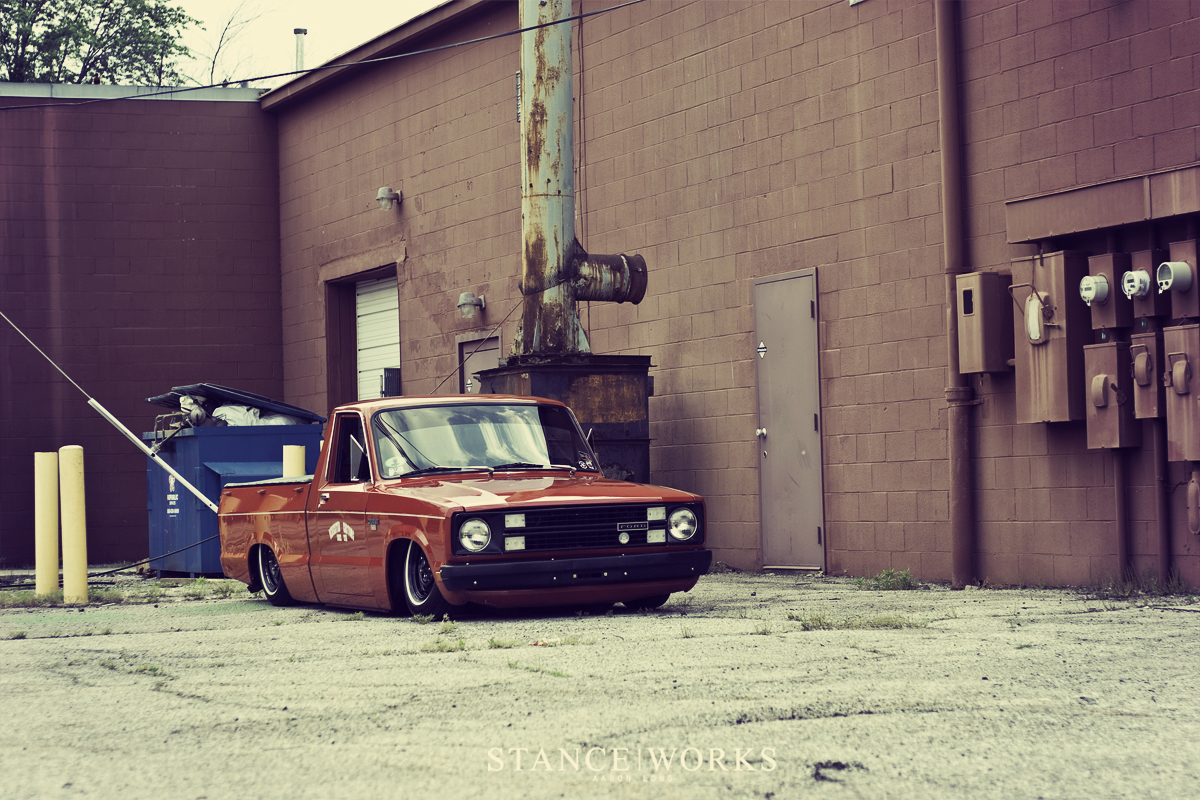 To follow, Mike had to take care of the ball joint angle at a lower ride height. Mike accomplished this by taking 20 degrees out of the control arm angle by the simple but effective method of putting a pie cut into the control arm and bending it downwards, followed up by the re-welding of the control arm in its new form. This allowed the truck to cruise along happily at very low ride heights without the strain and premature wear that comes from running ball joints towards the end of their range of motion. 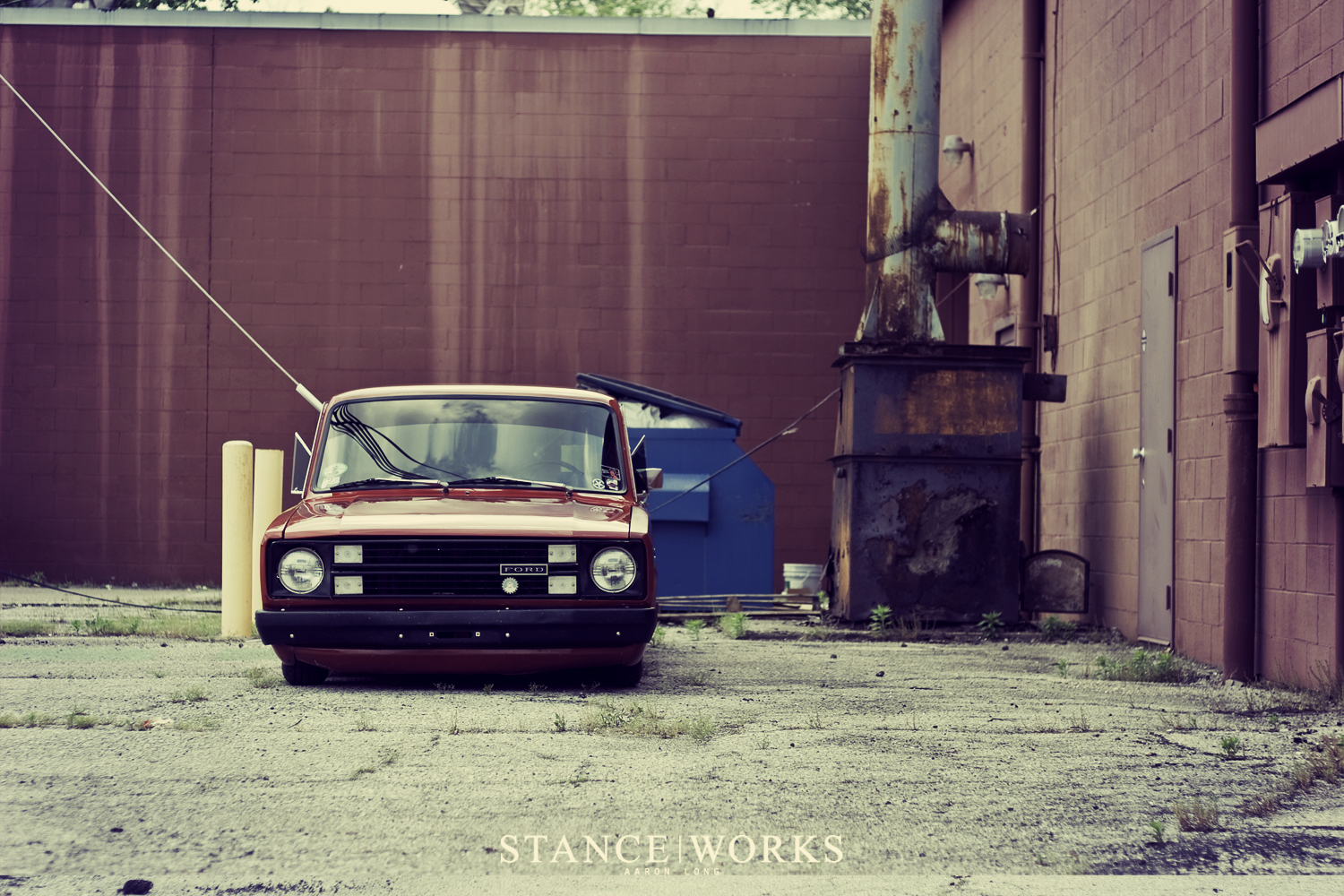 The front end of the truck was now situated, leaving the task of getting the rear to join suit. This is where things start to get complicated compared to the cars most of us are familiar with; the rear of the truck uses a solid axle. With the stock frame, the main issue isn’t the wheels and tires hitting the fender; but rather the axle hitting the frame well before the rear is able to lay out. The solution lies in notching the rear portion of the frame up a hearty 5 inches. Unlike the semi circle notches cut into the frame of cars like Volkswagens that allow a FWD/AWD car’s front axle another inch or so of contact free travel, a truck notch involes cutting out an entire section of the frame and moving it up 5 inches. This is a complicated task and a big undertaking to say the least, but running a metal fabrication shop made the task manageable. Mike wanted a smooth ride out of the truck and went with a 4 link setup to re-attach the axle to the modified frame. The bags in the rear were mounted directly to the link, and again, he created custom brackets to mount a shock to ensure a comfortable ride. The last step was raising the floor of the truck bed to be able to clear the new frame and axle setup, which now were well into where the bed originally resided. 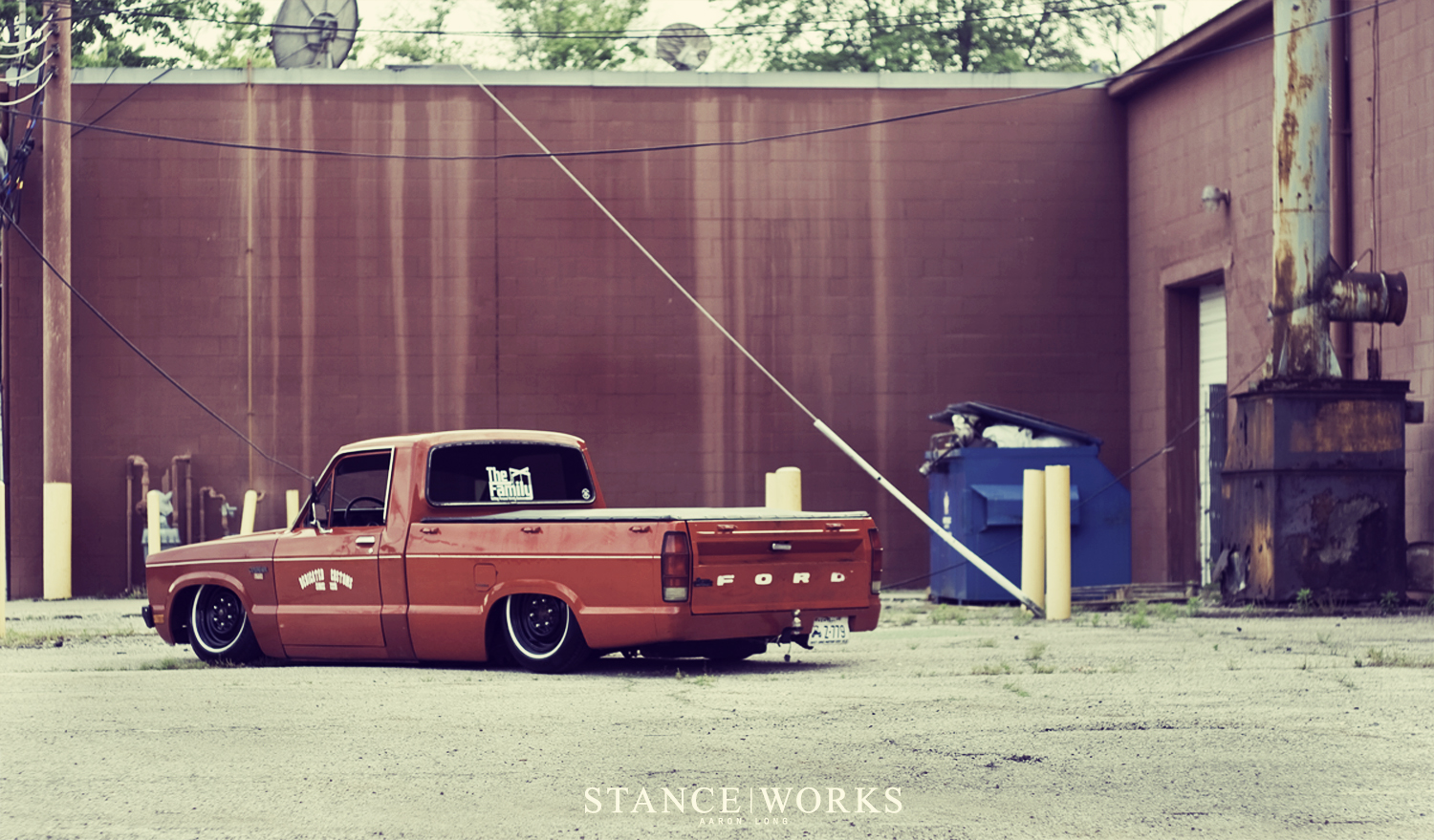 Control over the air ride was done in the tried and true old school fashion of two Viair 480 compressors hooked up to a 5 gallon tank, and management via a pair of 3/8” manual switches. As Mike lightheartedly put it, “no side to side bullshit.” He was building with a purpose. The truck was now sitting how he wanted; however, it left Mike with a shop truck that had a storage-impaired bed. To remedy this, a hitch was installed and sees use quite often, something that is refreshing to see. Mike related “It is so funny to see the looks on people faces when a 46" tall truck pulls a trailer with 1,500 lbs of firewood," a necessary task as the firewood is used to heat his shop throughout the winter. Mike also swapped out the truck's 3-speed automatic for a 5-speed manual, one of his favorite “mods.” He boasts that the little 2.3 will now cruise along happily at 75mph. 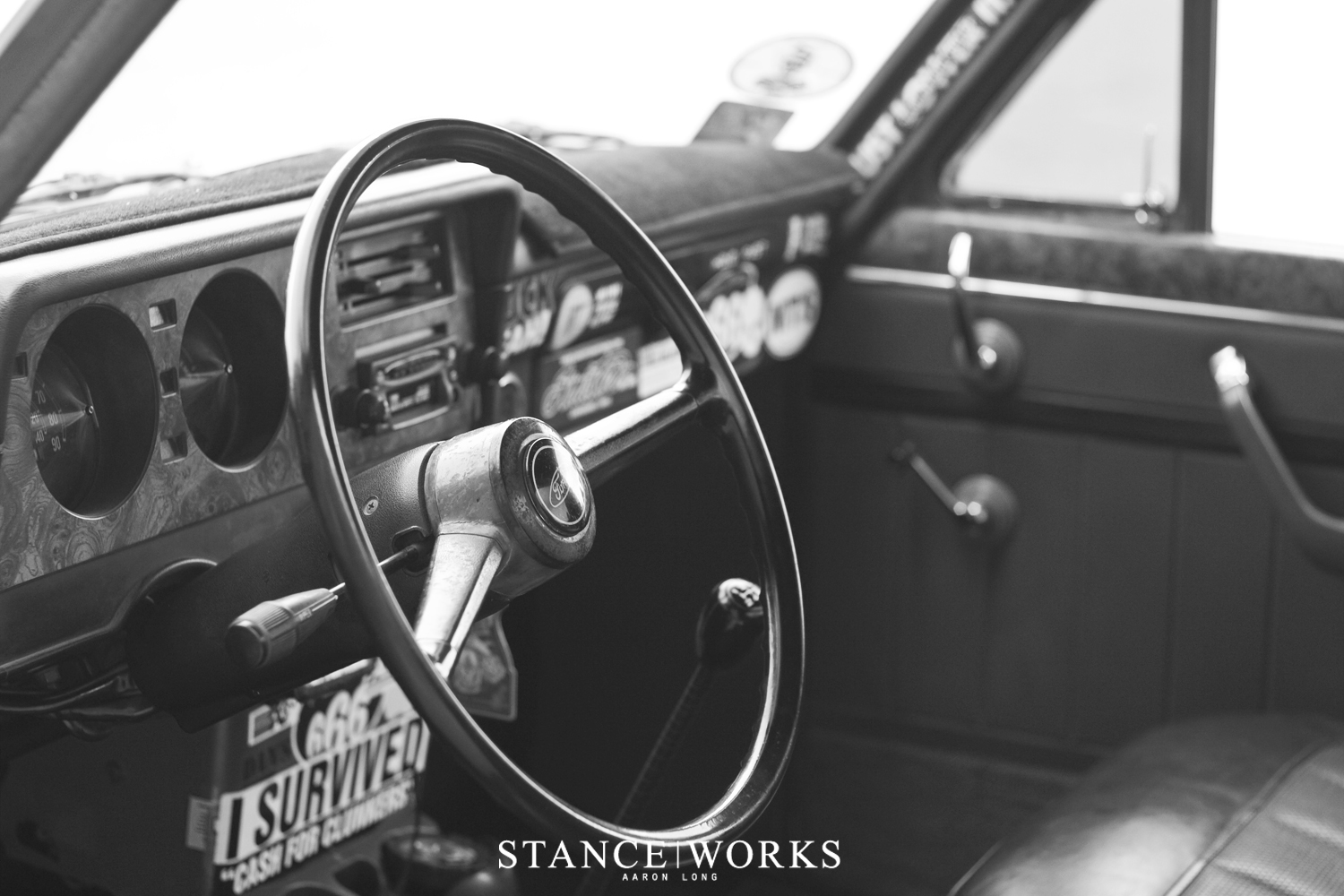 Mike is passionate about his Courier, and it shows in both his enthusiasm towards it and the end result of the truck. It makes a great moving billboard for his metal fabrication shop, and you can tell he truly enjoys driving it around daily as his shop runner. While individual tastes change, and there is the constant urge to move on to bigger and better, or simply new things, it is admirable to see a long-time dream carried through. Good things come to those who wait rings true, and you can tell through his excitement regarding the Courier that Mike is pleased he did. It may not be a show-stopper, or the next big thing, but it is exactly what he wanted to build, and in the end personal satisfaction is far more enjoyable than the praise of others. 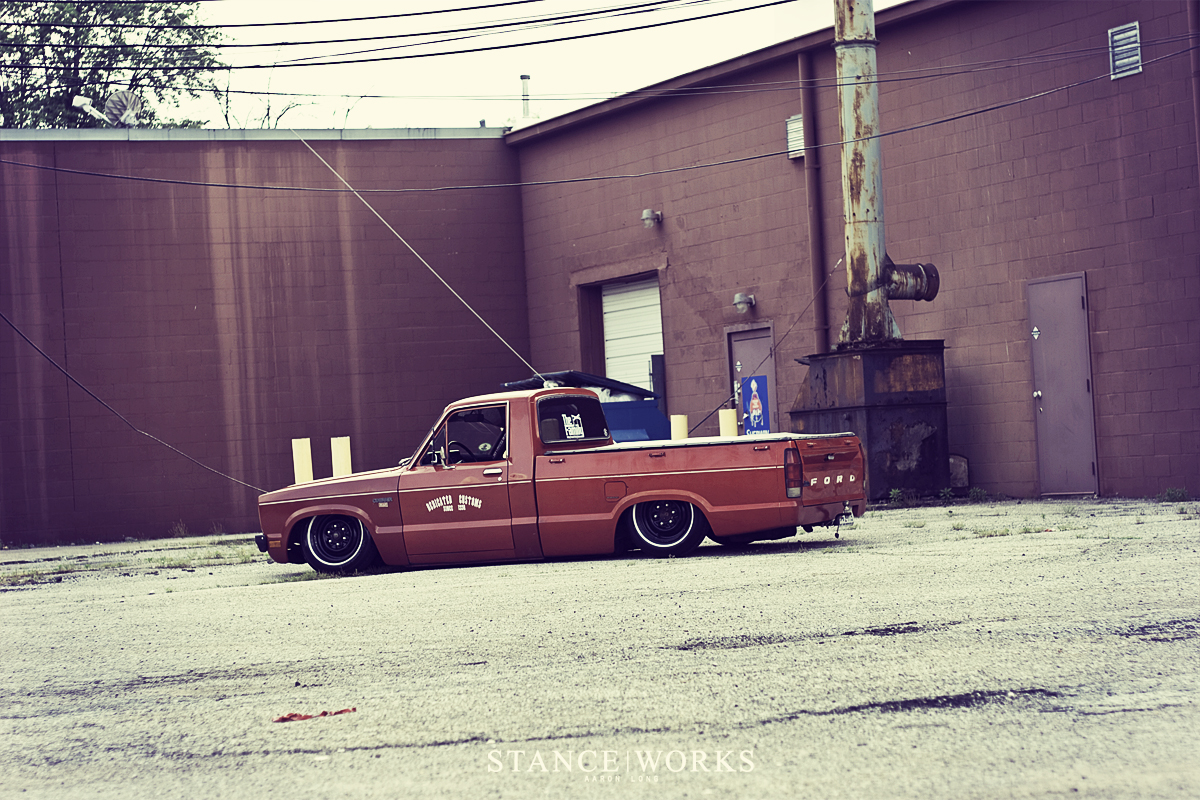