Since 1911, just one year after the company's birth, Alfa Romeo has been sprinting past the checkered flag ahead of the competition: 102 years of automotive racing experience has been collected, refined, and formed into a brand that has become synonymous with performance and engineering. The italian marque has celebrated victories in seemingly every category of motorsport, ranging from the world's first Grand Prix Championship in 1925, to the depths of mud in rally racing. By the 1960s, Alfa had its own racing development department, Autodelta, which was given the responsibility of retaining the racing prowess Alfa Romeo had earned over the past decade. The team, founded and headed by a former Alfa Romeo and Ferrari Engineer, and an Alfa Romeo Dealer, would, in due time, become responsible for one of Alfa's most iconic cars to date. 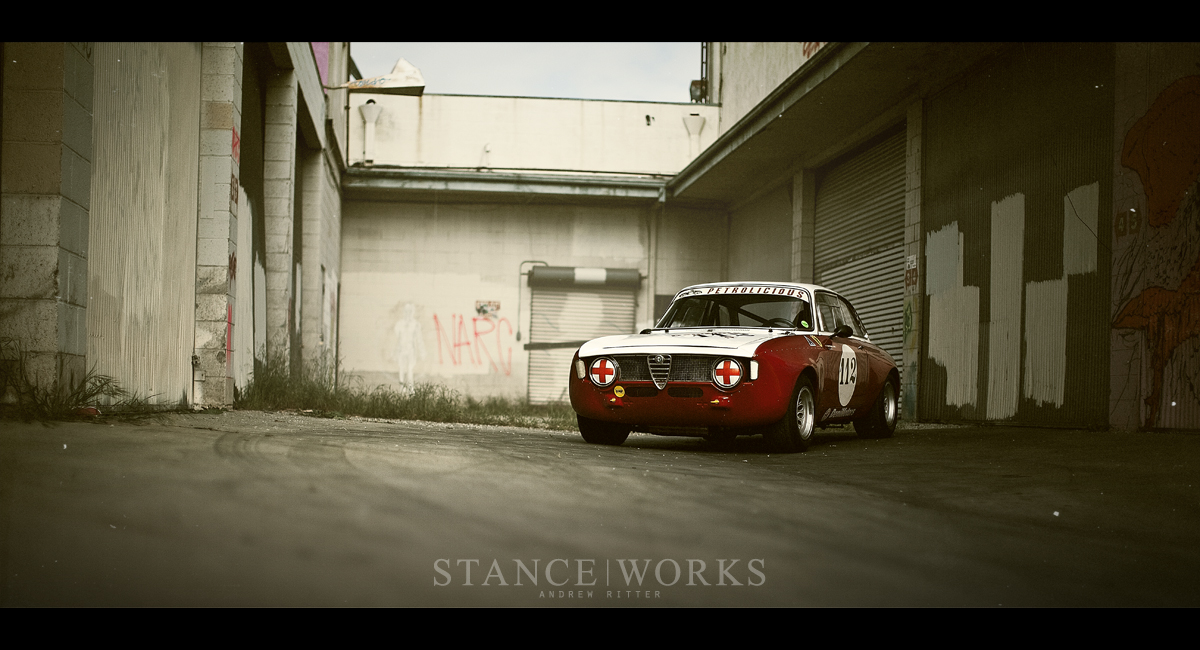 In 1962, Alfa Romeo unveiled the replacement for their successful Giulietta line of coupes and sedans. Introduced initially as a sedan under the name of the Guilia, the sporty four door successor is credited with being one of the first mainstream pairings of a light weight chassis and a high-output engine. Alfa threw the "bigger is better" mentality right out the window, and the result was a sedan that truly held its own. By today's standards, the 12-second 0-60 time is about on-par with a city bus; however, at the time, the performance rivaled even the best of sedans for almost a decade.

The following year, in 1963, Alfa Romeo decided to take another step forward in the right direction: smaller, lighter, and faster. With a new model in mind, the Guilia's wheelbase was shortened and the body was penned by Giorgetto Giugiaro at Bertone - one of his first major products for the automotive design firm. The result was Alfa's Giulia Sprint GT, GTV, and GTA coupes - perhaps some of the most favored cars the marque has ever built. 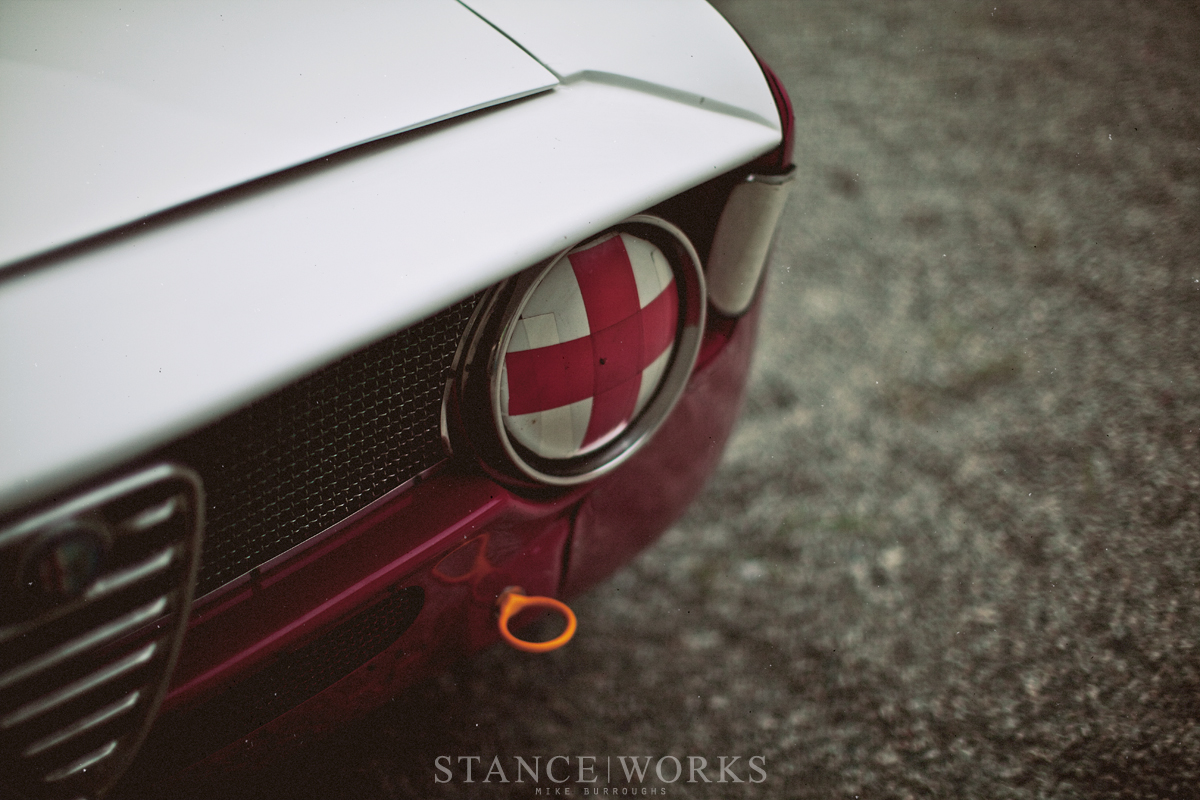 Known internally as the 105 and 115 series of coupes, each model in the range was fitted with a four cylinder 8-valve twin-cam engine, ranging in displacement from 1290CCs on the small side for the GT 1300 Juniors, all the way up to 1962 for the 2000GTV model. The cars each featured a 5-speed transmission paired to a solid rear axle, with disc brakes mounted to each end. 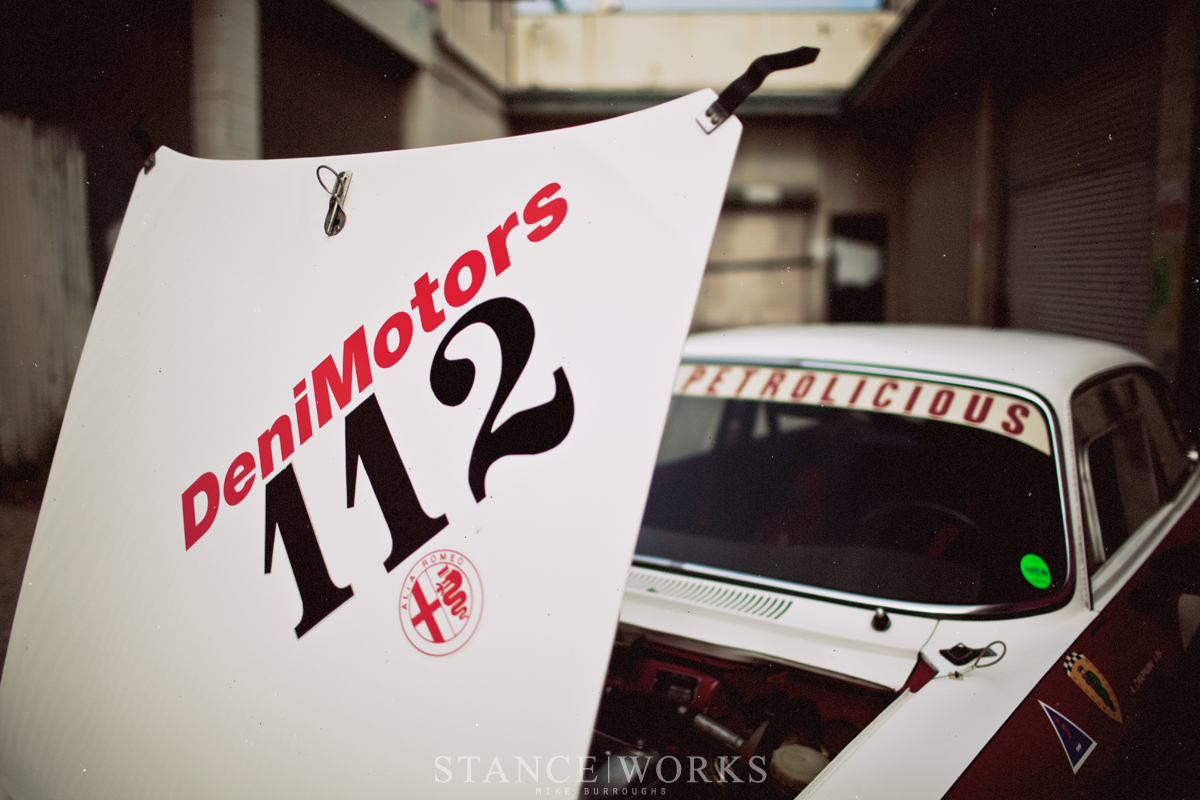 The models were separated into two categories - one for the GT and GTV, and the other for the GT Juniors. The GT cars were born as the sportiest model offered by Alfa; however, over time, the GT evolved into the GTV (Gran Turismo Veloce), which over the years went up and up in engine displacement. At the end of its production, the 2000 GTV, built from 1971 to 1976, topped the model range with a 2 liter engine pumping out 130 horses in fuel-injected form for the North Americans, and 150 horses for the carbureted counterparts. 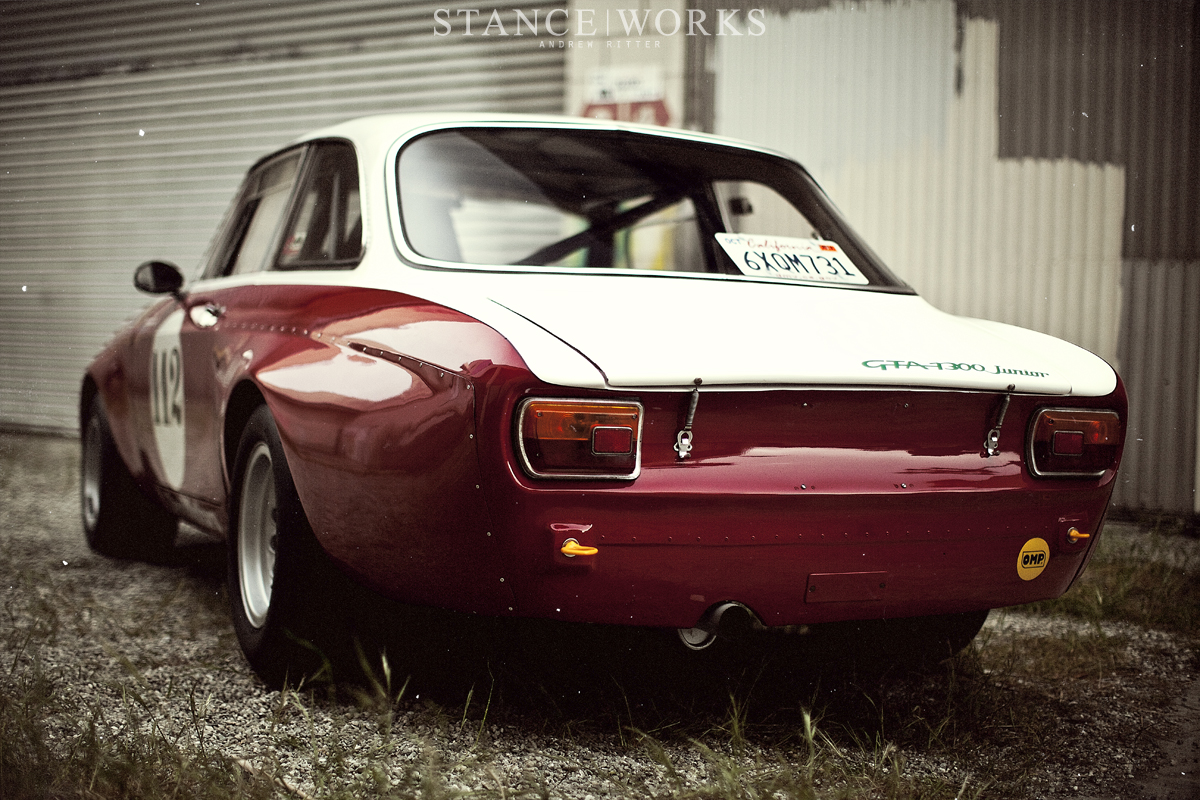 However, in Alfa's own Italian market, taxation on the larger displacement cars called for an entry level coupe in the range. The GT Juniors offered the world-class aesthetics and the second-to-none handling characteristics of the GTV, paired with a small-displacement inline four at just 1290CCs. The little coupe pumped out just 90 horsepower, but was still found to have a respectable 0-60 time of just 12.6 seconds. However, just as the GTV evolved, so did the Junior, and by the end of its cycle, the Junior was available with the 1570cc engine - the same found in the orignal GT. 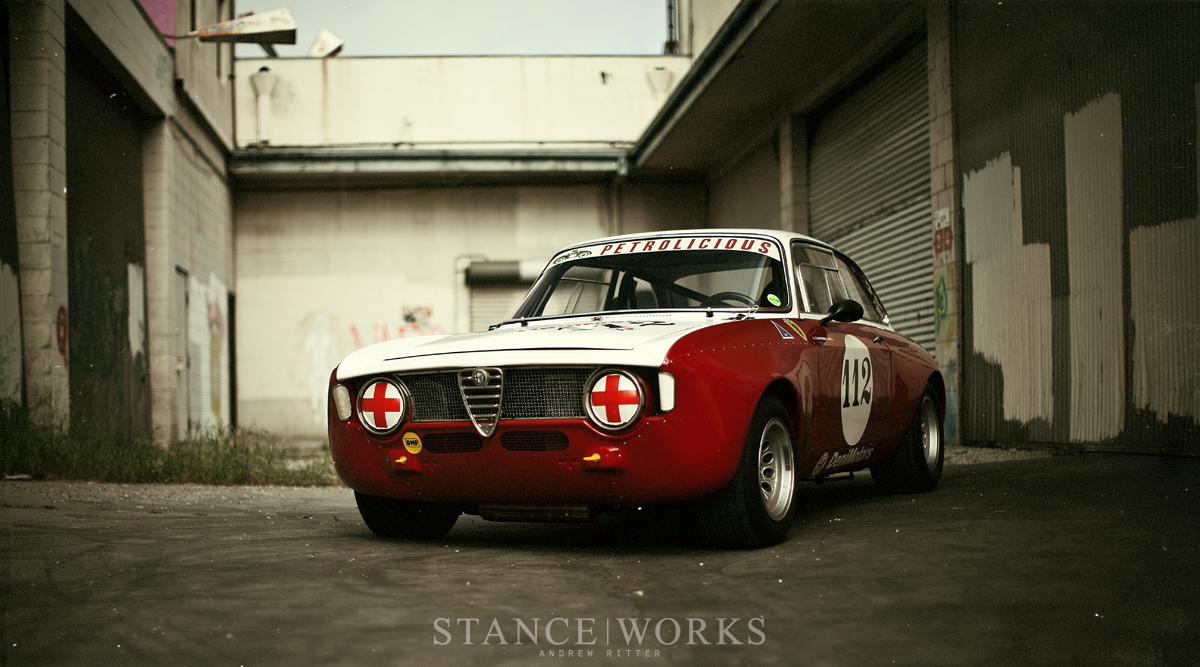 There was still more to be done, however. As a marque centered around performance, Alfa went to the desks of their performance division, Autodelta, with a mission. The GTV and GT Junior needed an even more performance-oriented counterpart, and so a project began with an initial model: a 1600. The steel body of the coupe was replaced with aluminum, and the steel monocoque structure was built out of thinner material to shave as much weight as possible. Unsprung weight was minimized by custom magnesium wheels, and aluminum control arms shaved weight even further. The glass side windows were replaced with plastic units, and the trim inside the car was replaced with lightweight trim. 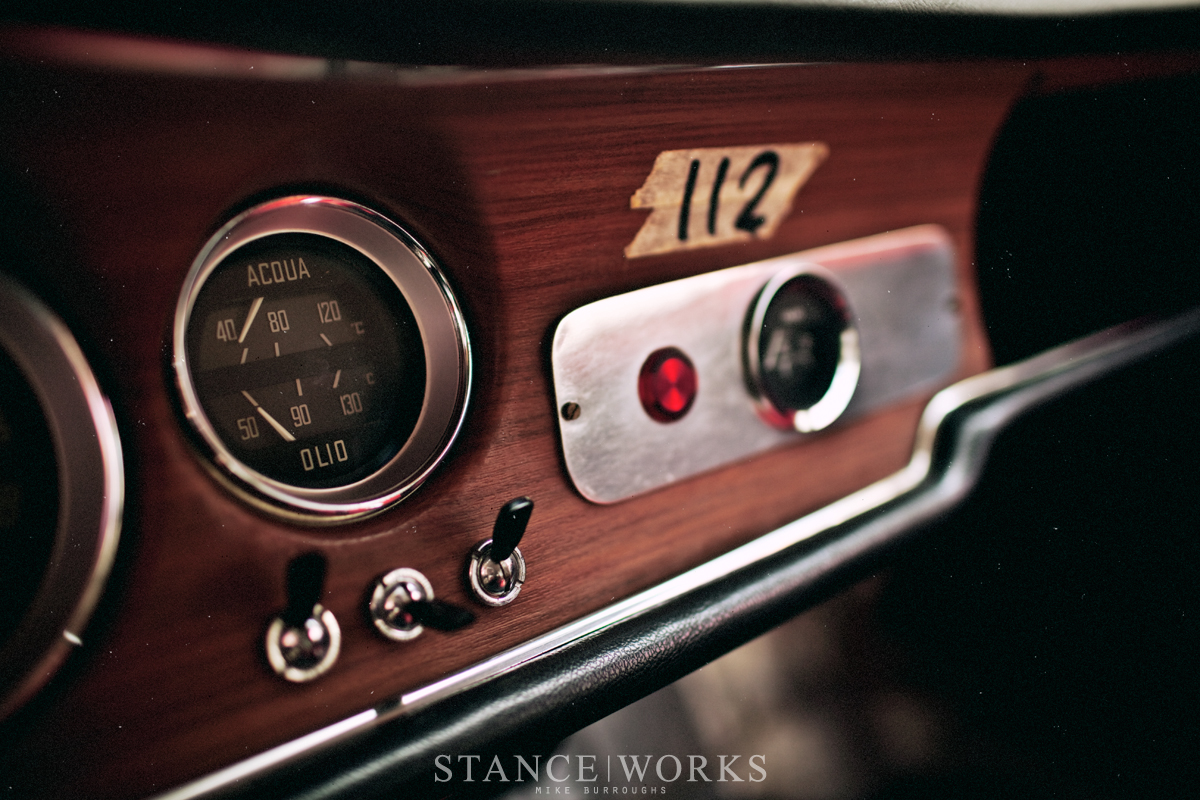 Everything about the car was built with the final weight in mind, including the engine. The 1600's engine was fitted with a new double-ignition system to maximize output, while the bell housing, timing cover, sump, and valve covers were made out of magnesium. The brake booster was tossed in favor of manual braking. Even the gears inside of the transmission were machined to save precious ounces. The end result was a car that weighed in at just over 1,600lbs - a featherweight. The cars were built in two forms - for street, "stradale," and for race, "corsa." The street version produced 113 horsepower, however, in corsa trim, the little grunt put out a staggering 163 horses. The final name given to this all-new purebred child of the Giulia Sprint GT lineage? The Alfa Romeo GTA. The "A" stands for "Alleggerita," or "lightweight," and just 500 were built. 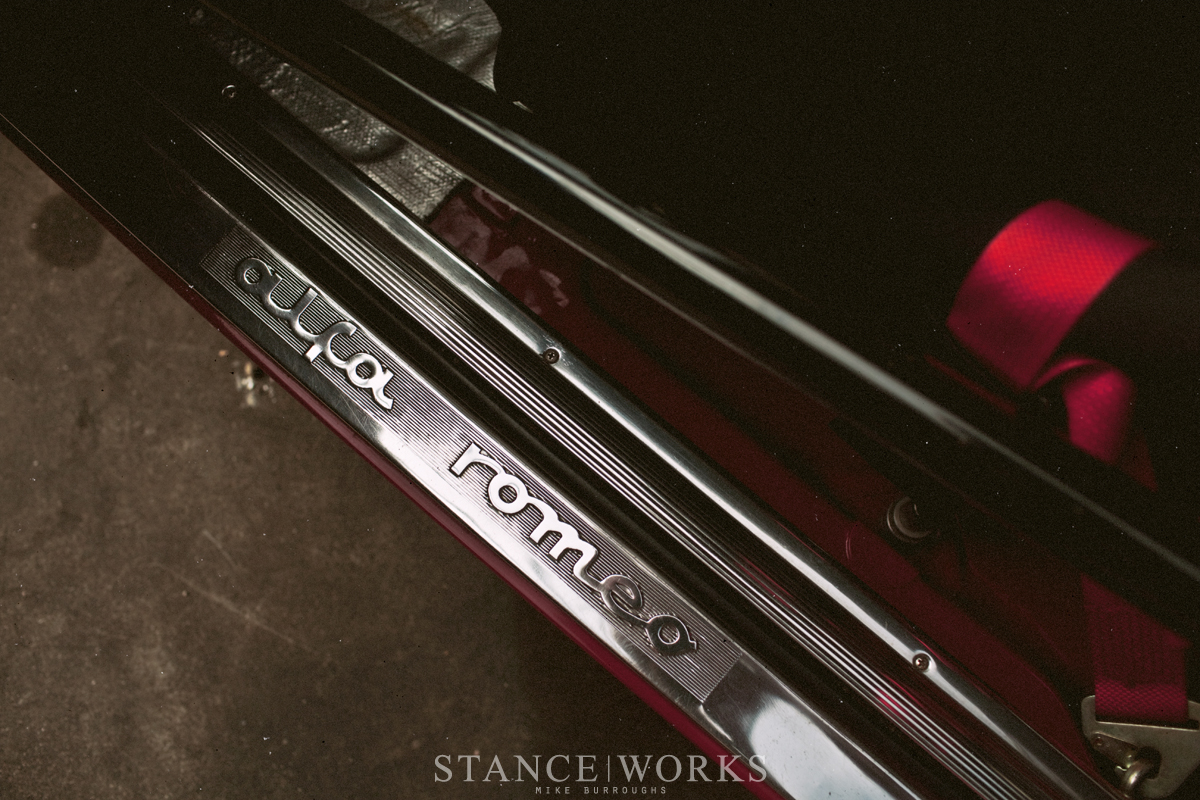 Autodelta quickly followed the GTA with a second model: the GTA 1300 Junior. The GTA Junior came in a stradale and corsa form as well; while it was still very nimble, the street version came without many of the weight-saving options as the standard GTA, such as the plastic windows and magnesium engine components. The corsa version, however, hit every stop. The Junior corsa cars revved to an extraordinary 9,300RPM and boasted a compression ratio of 11:1. In its greatest racing trim, the fuel injected versions built by Autodelta, the GTA Junior surpassed its bigger brother to pump out 178 horsepower from the tiny 1.3-liter engine. The GTAs quickly became a force to be reckoned with, winning countless races over the course of decades. Of course, that brings us to the car we have in front of us. 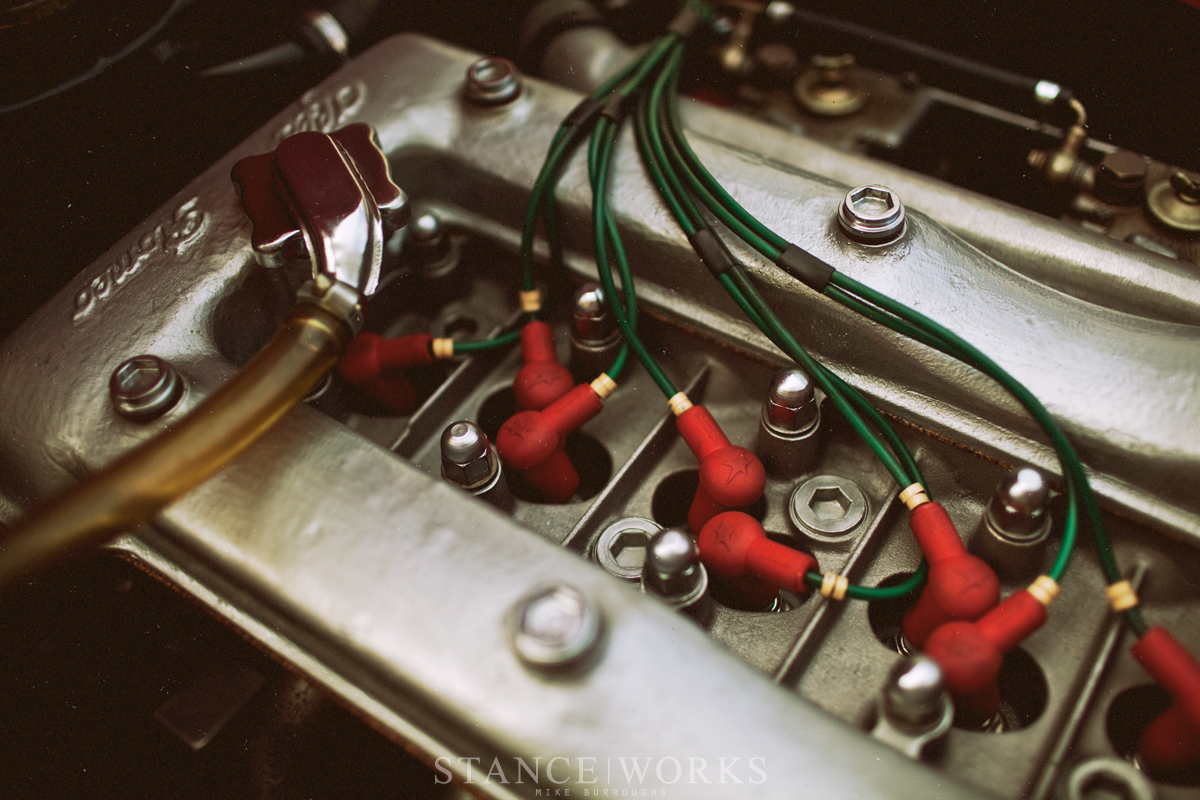 When we paid a visit to Petrolicious last week, founder Afshin Behnia was kind enough to share his collection with us - and better yet, he offered us the chance to photograph the cars one-on-one. I found it impossible to ignore the GTA 1300 Junior that sat amongst the others. Seemingly without hesitation, it was decided that the little GTA would be receiving the StanceWorks treatment. We set out to find a location, and within an hour, the Alfa was perched in front of our lenses. 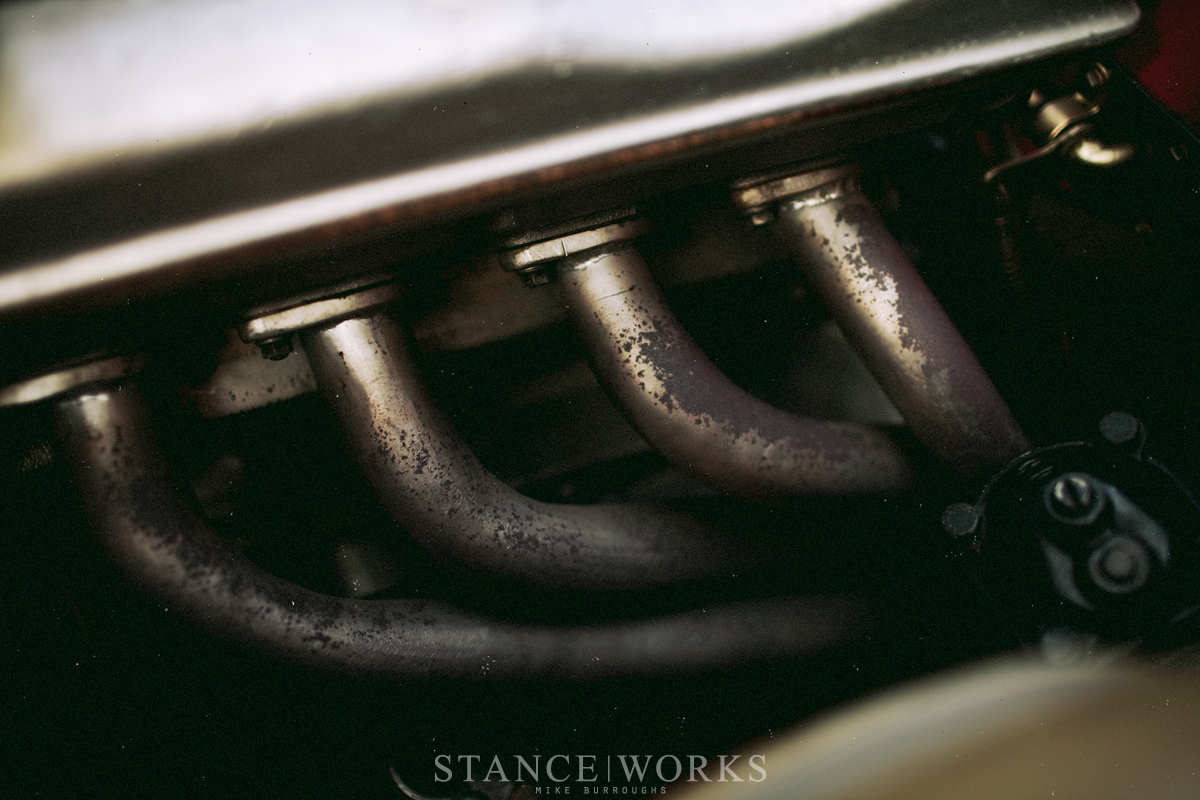 Afshin, an avid Alfa enthusiast, purchased the car in January of last year. He tells me "The car was prepared and raced by Chiapparini - It is fully race prepared, almost, but not entirely, with period-correct components, including tires.  With a shaved head and a high compression engine producing about 140HP at the wheels, it can rev to 9000 RPM for short stints, and regularly at 6--8000." 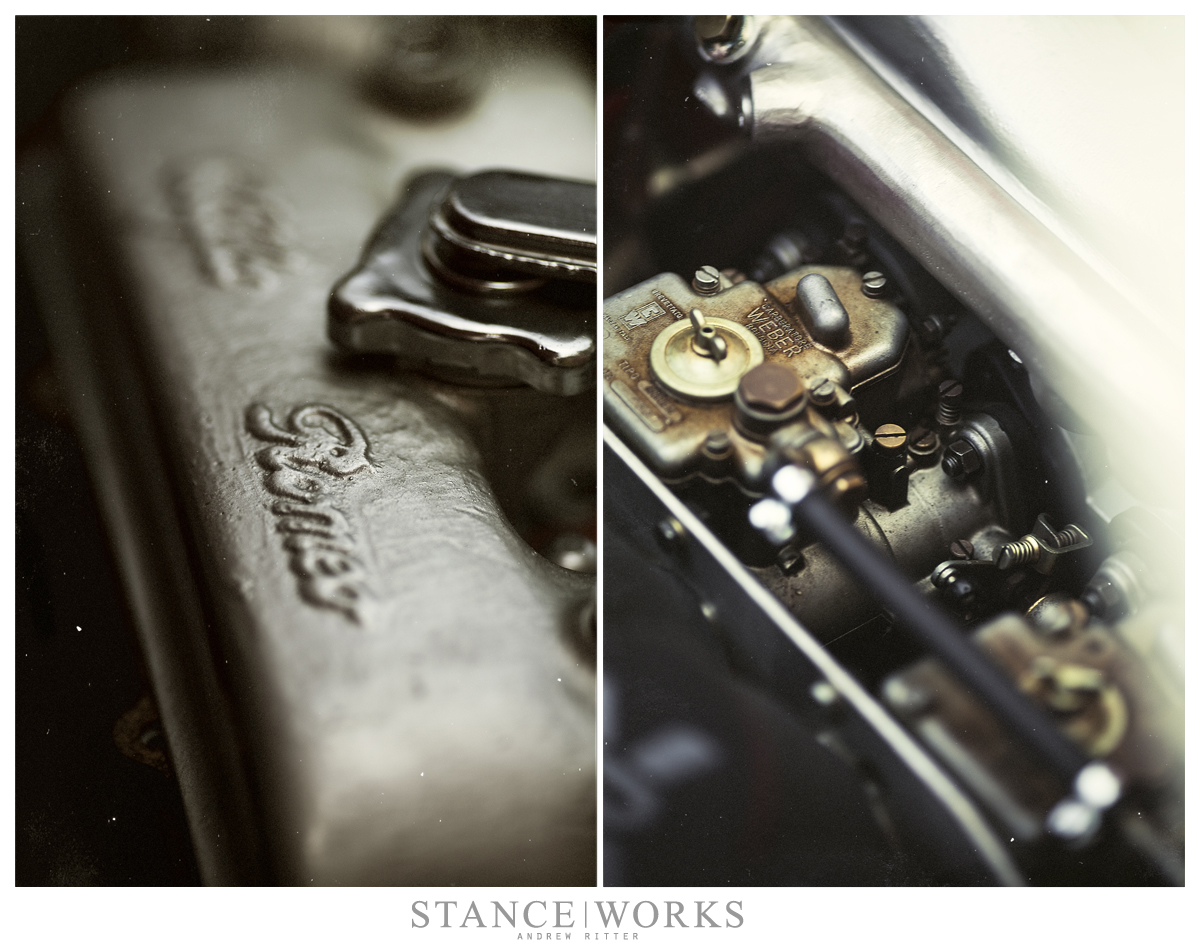 The history of the car itself, as with many vintage race cars, is somewhere between wonderfully documented and all but forgotten. When Chiapparini purchased the car in 1980, he built the car to FIA standards. It was raced extensively from 1998 through 2002 in various vintage car races throughout Italy, and the FIA passport proves it. However, when the car was built in 1968, it was one of the very few examples that was not entered into any races. 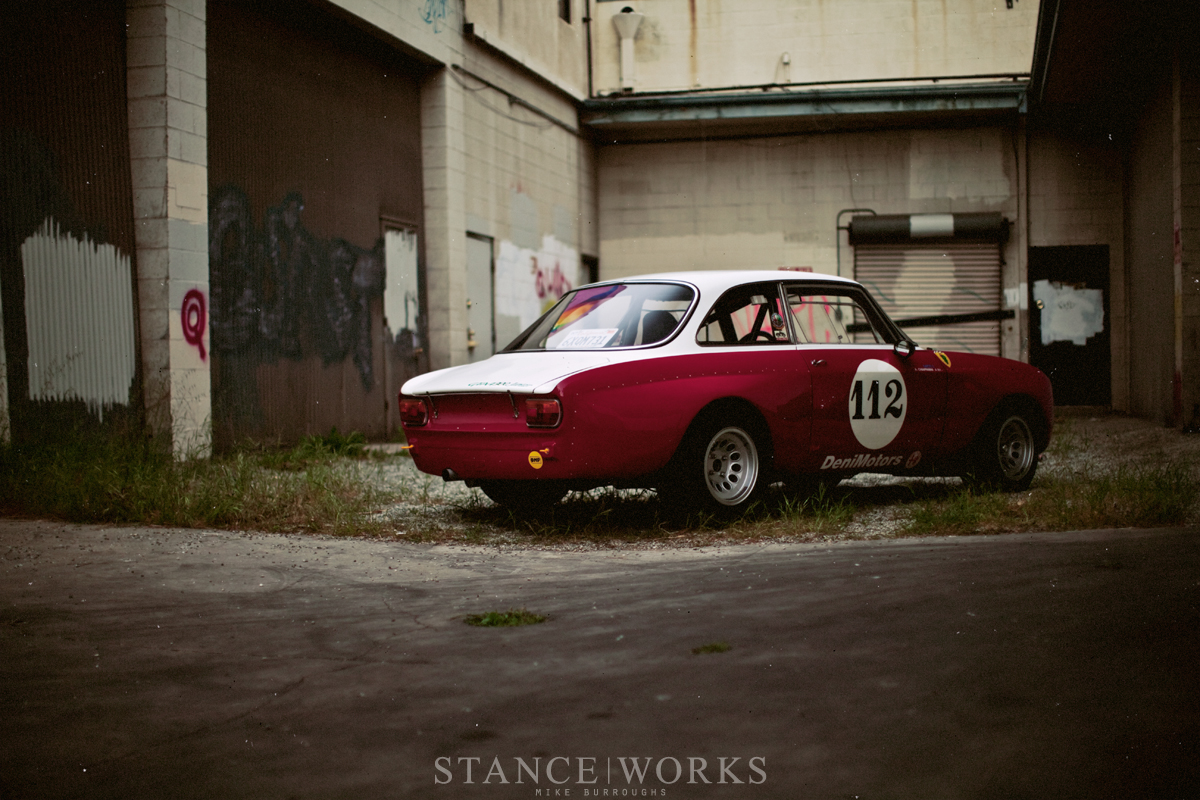 The GTA lineage continued through Autodelta with the GTAm, a 240 horsepower monster derived from the American 1750 GTV. Speculation still runs rampant as to what the "Am" name truly represents. While some believe "Alleggerita Maggiorata," or "lightened enlarged" to be the case, most believe "America Maggiorata" to be the case. Despite confusion over the namesake, the car went on to win hundreds of races. The Italians continued to get carried away, with a final car added to the GTA lineup: The GTA-SA. Built as a variant for FIA Group 5 racing, the 10 copies of the SA features a pair of oil-driven superchargers mated to a 1570CC engine. The boosted Alfa produced 250 horsepower, and only 10 were built. 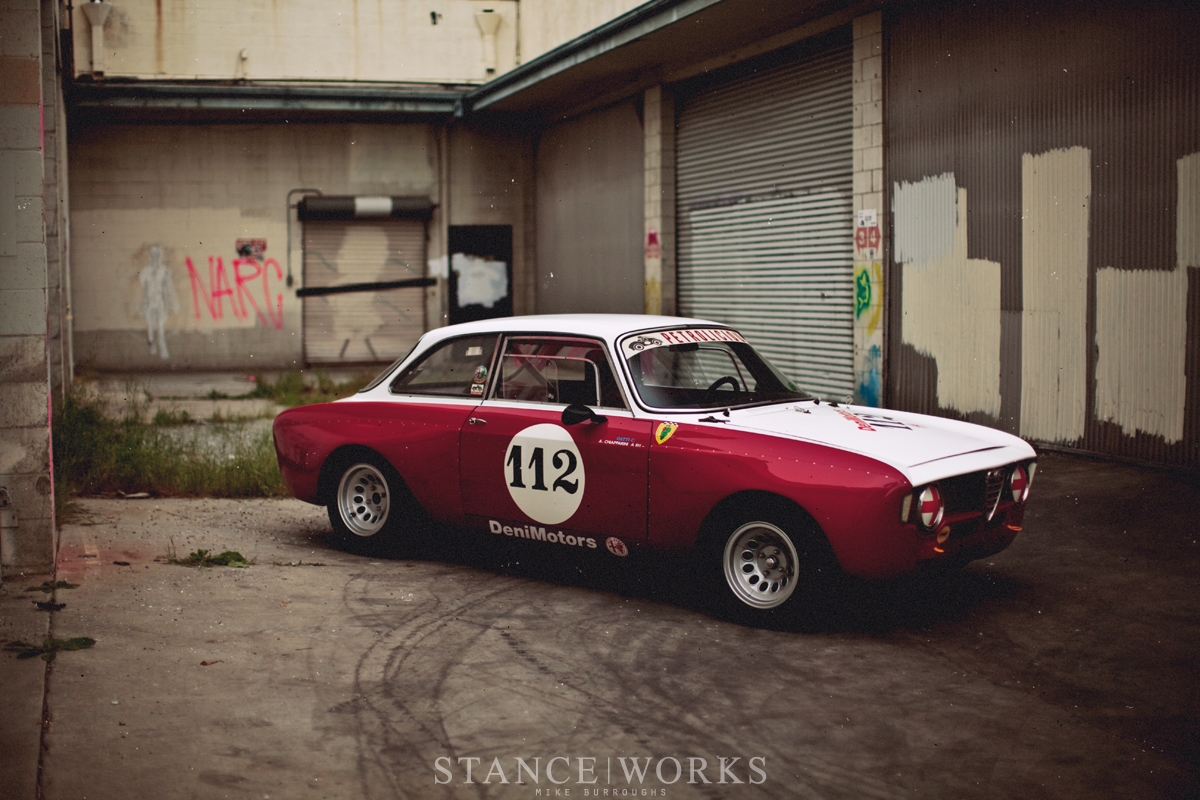 But what remains of the GTA lineage? In all, somewhere around 1060 cars were given the GTA namesake, from the 1600 GTAs, to the Juniors, the GTAms, and the SAs. As for how many remain, your guess is as good as ours.  However, some of these Alfa Romeos live on, and those who are fanatics of the brand have an unparalleled level of affinity - including Afshin. His GTA Junior remains on duty to this very day. A recent track day with the Alfa Romeo Owners Club of Southern California keeps the GTA's legs stretched, and every now and then, the GTA sees street time too. After all, it is a registered road car. While "Alfa Romeo" spells oil leaks and unreliability to your average car enthusiast, there's a special group of people whom harvest a special love for these purebred Italian sportsters. Afshin and others will do their part to keep these legendary racers on the road, and we'll do our part to celebrate them.