As car guys, many of us owe it to our fathers for passing on their interests, hobbies, and passions. We grow up watching, learning and wrenching with the best; the one who, in our eyes, can build anything. But with experience comes age, an unforgiving enemy. Joe Dale, the man behind the beautiful steampunk Benz, decided it was time to follow through on his own father's dreams. 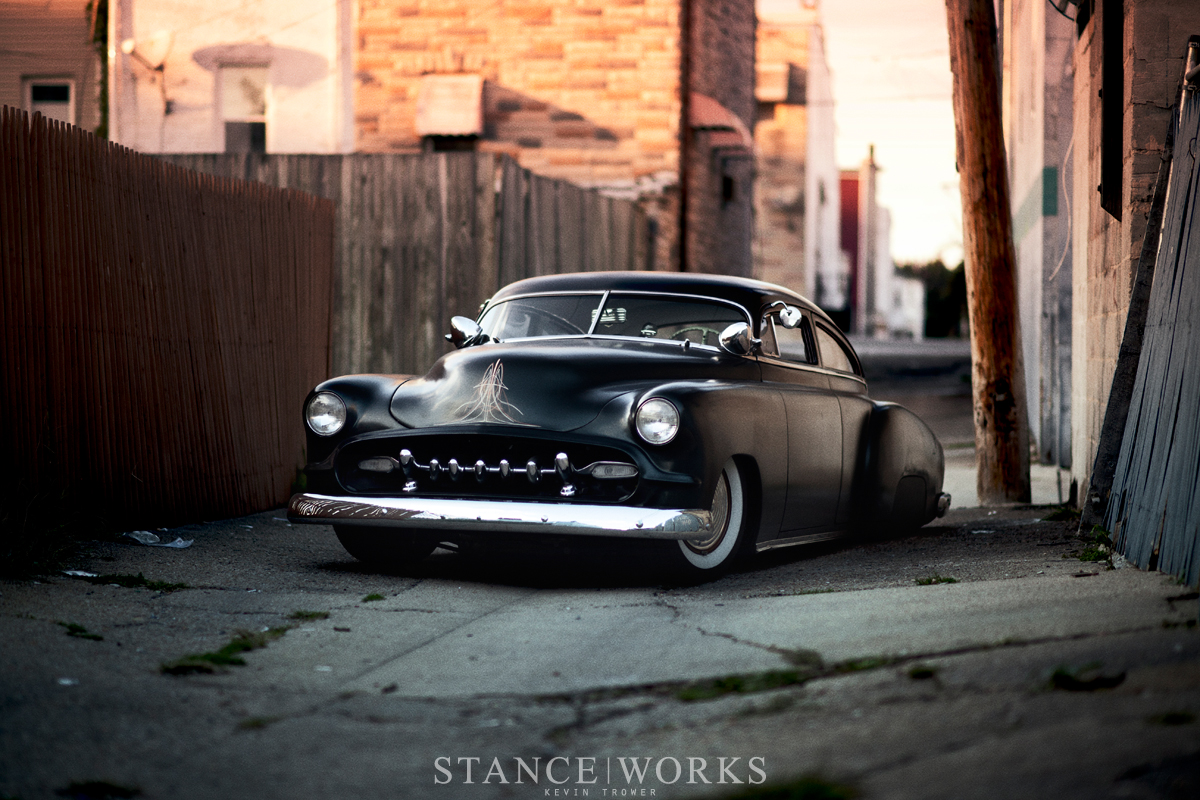 Joe's father is as much a motorhead as Joe himself - after all, Joe got it from somewhere. But as Joe has grown older, so has his father, and every good story unfortunately comes to an end. "He had always longed for a cool ride and had considered diving into a father-son project, but I knew that time wasn't on our side," he told me. It was Joe's mission to find something the two could work on; something that needed just the right amount of work. 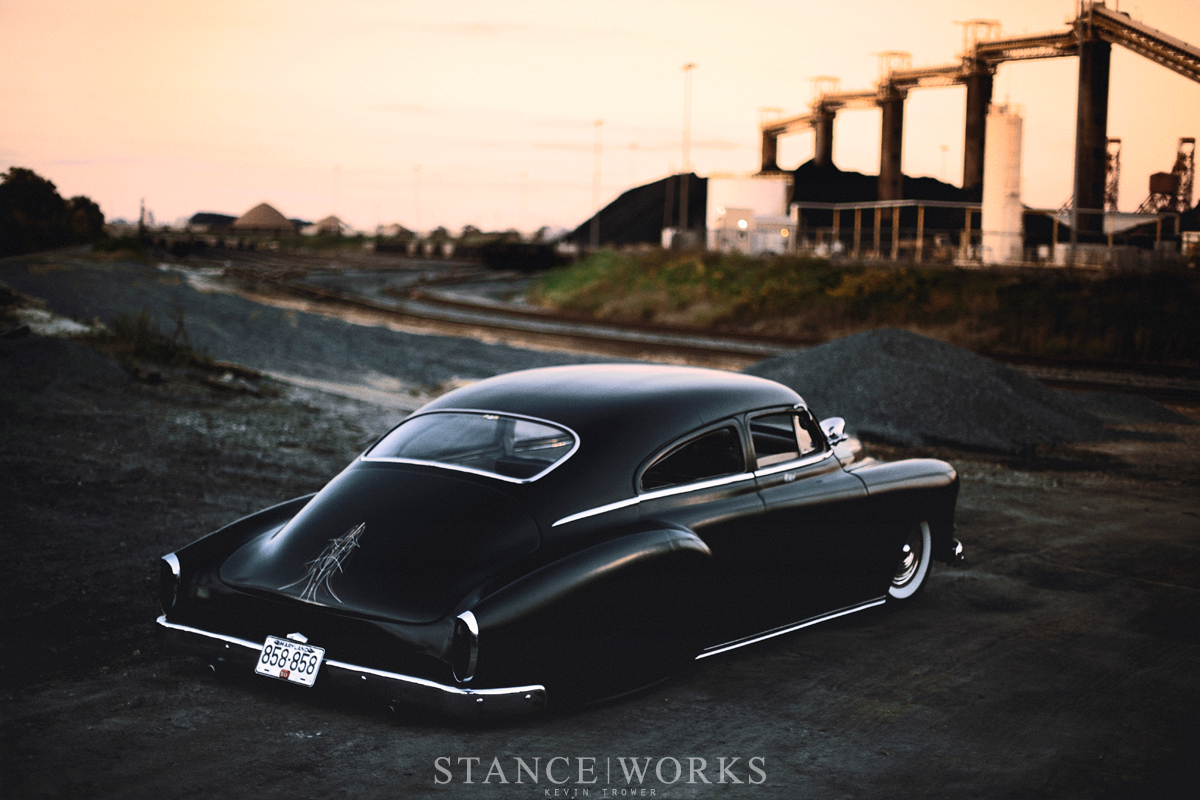 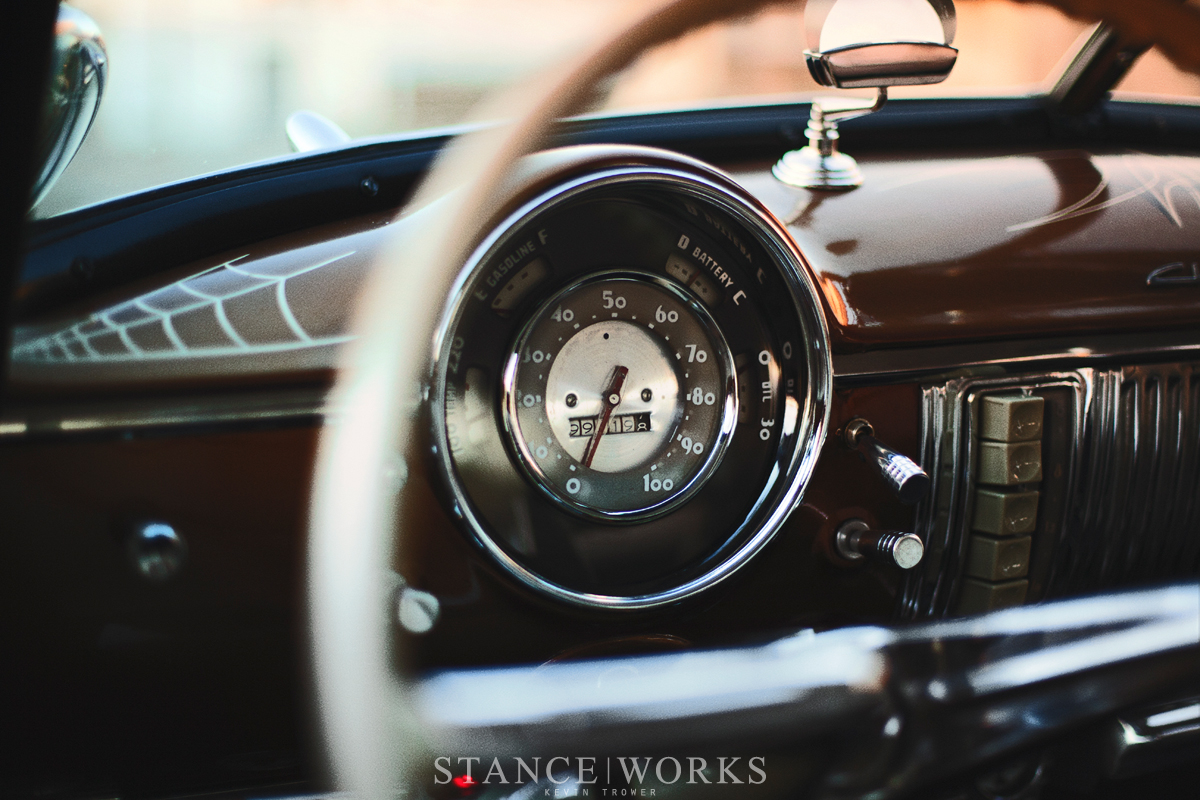 "The objective was to find something totally badass yet incomplete. Complete is a term rarely used when it comes to cars anyway, but more importantly, I searched for something road worthy but needed some TLC." His search lead him to eBay, inarguably one of the best places to find once-upon-a-time projects turned into my-wife-says-it-has-to-go burdens. "I knew he always loved '50s cars, so the search started for an early '50s Chevy or a Merc." Joe's browsing eventually brought him upon this chopped Chevy sedan. 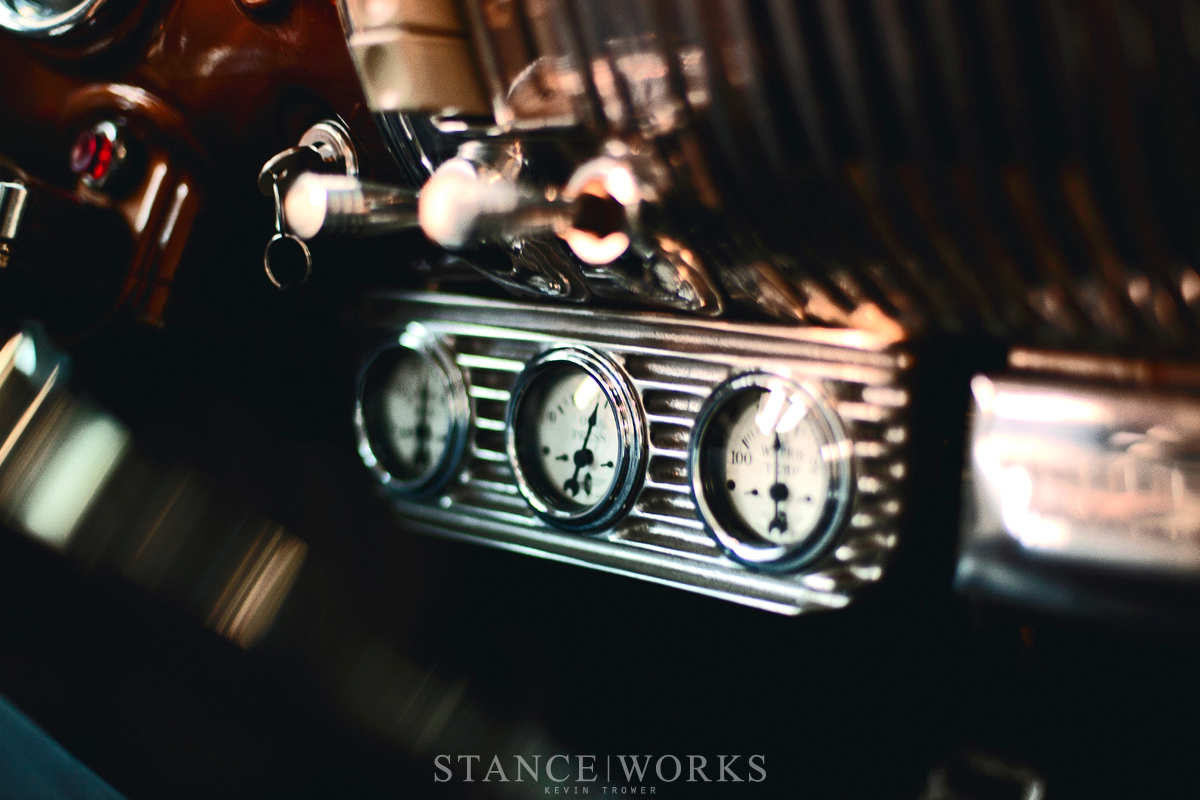 The car seemed a perfect fit to Joe's needs: something in need of an overhaul and some personal flair - something that would lend a sense of accomplishment any time he and his old man touched it, but something that didn't need  serious investment of time and energy. And so, on a whim, Joe purchased the car, flew to Pennsylvania, and drove the car home 5 hours - and his father had no idea. 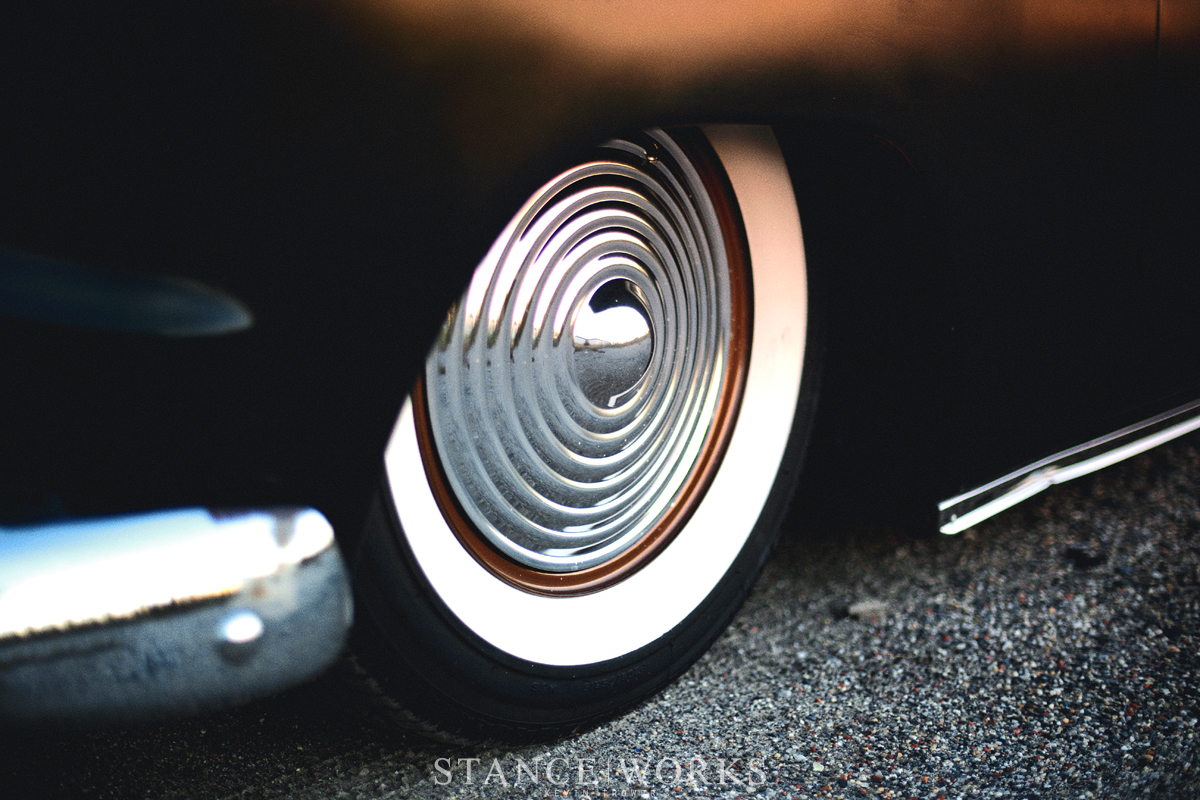 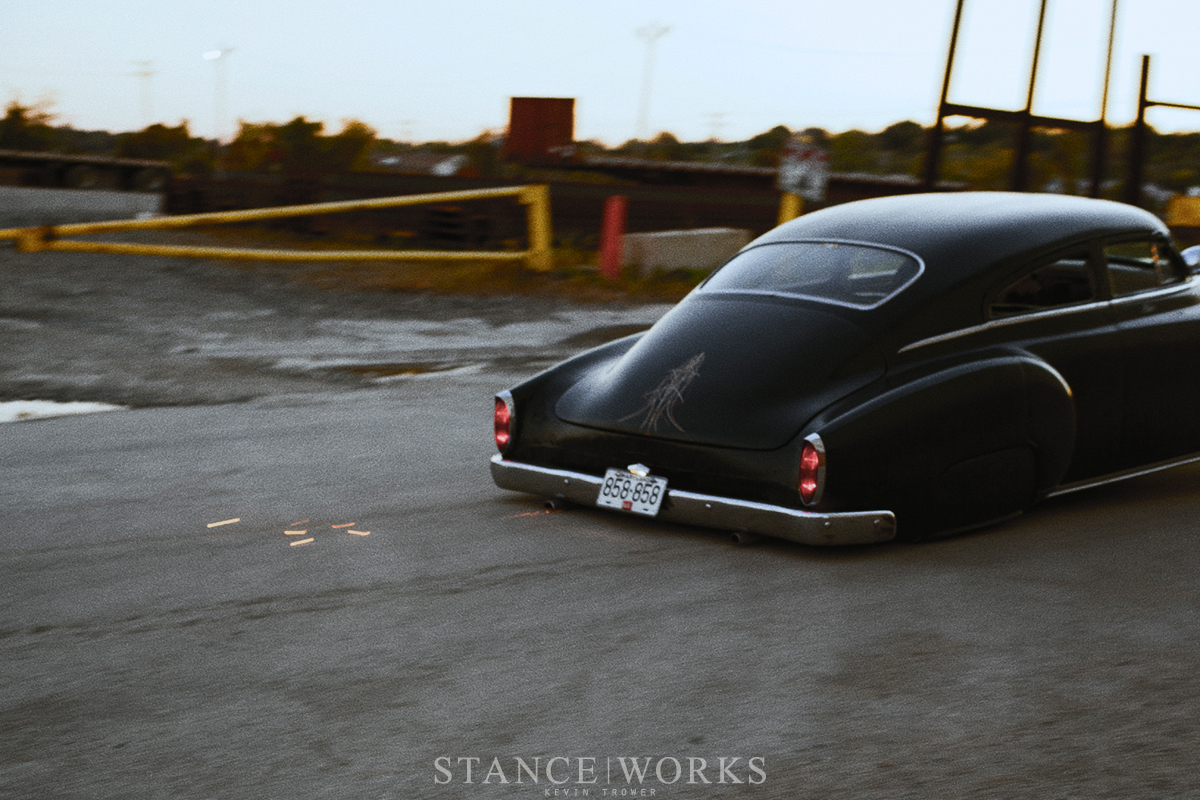 Now the father-son duo had a project to themselves, something to enjoy together one last time, and first on the list was figuring out exactly what needed work and what was already done. Originally built in California, this 1950 Chevy Fleetline sedan features a 5" chop to the roofline, a pancaked hood and trunk to lower the bodylines, and the handles and accessories have been shaved all around. Frenched headlamps sit above a '54 grille surround and a Desoto grille. The rear quarters are lengthened with '54 tail lights sitting above a flipped '54 front bumper. A deep, dark satin green coats the unfinished bodywork. 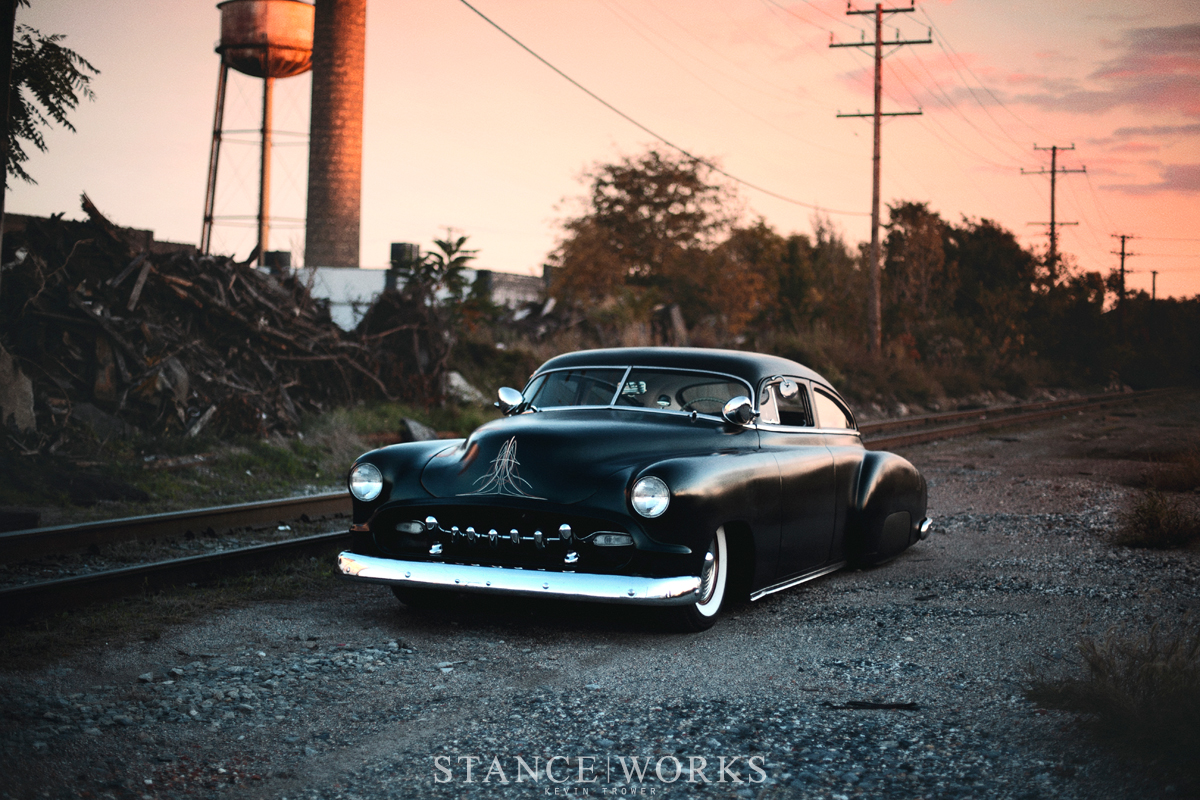 Beneath the skin of the sled lies a simple Chevy 350 mounted to a 700R4 automatic transmission. A Mustang II front clip (disc brakes, rack & pinion) holds up the front and a Ford 9" rear end connected to a 4-link setup gives her traction out back. A couple of Viair compressors and air suspension round out the package. Joe puts it well: "For the most part everything here is standard lead sled affair." 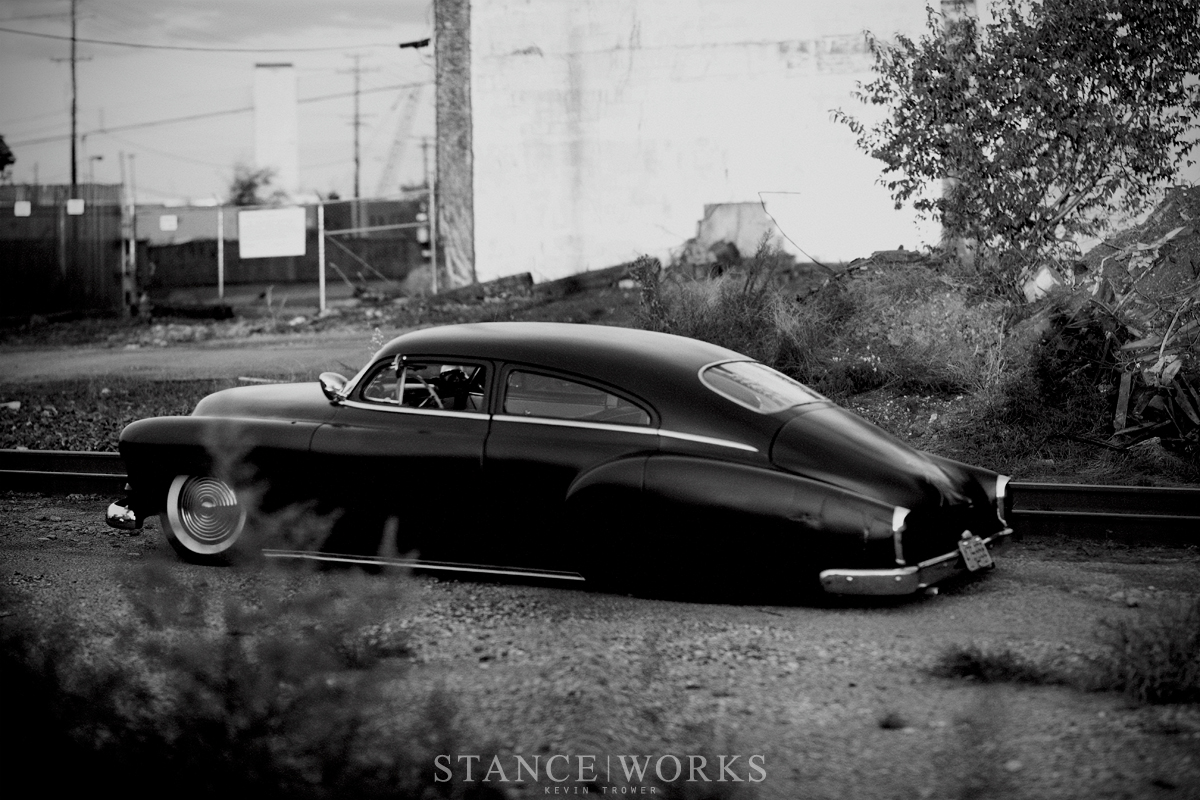 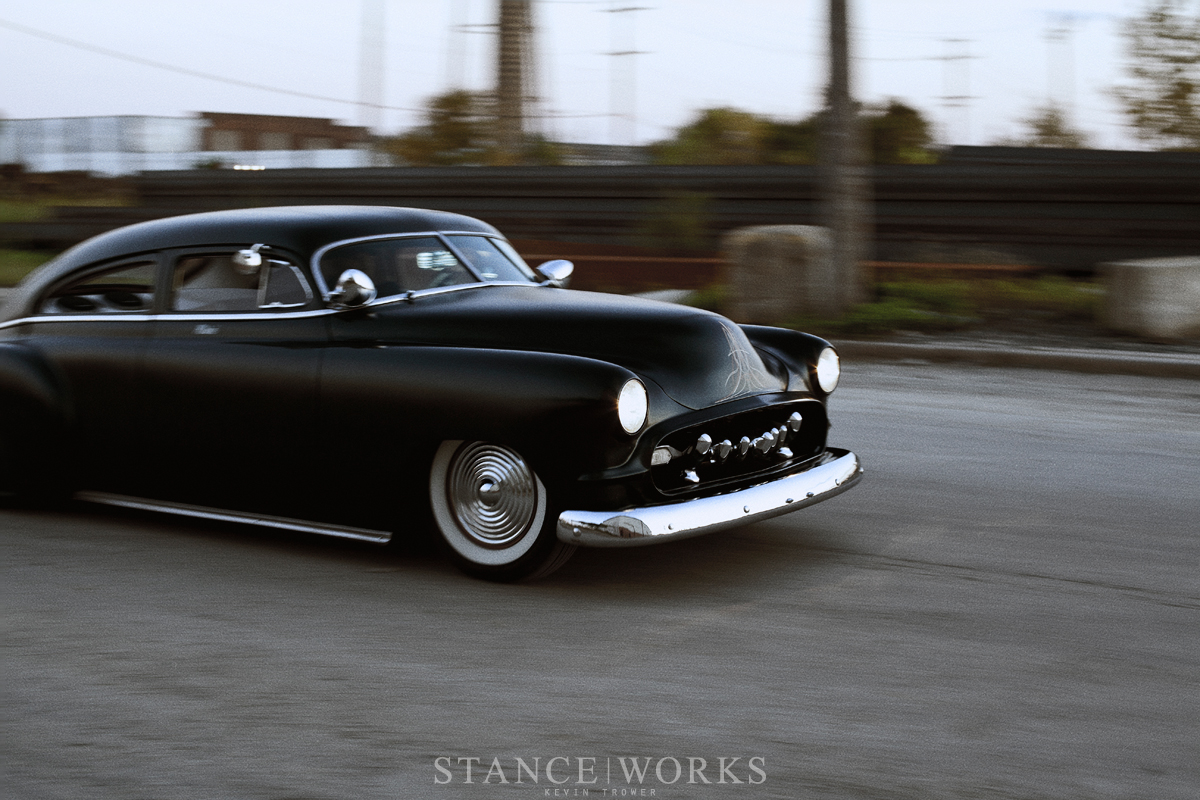 While some balk at the notion of buying someone else's project, Joe expressed a valuable sentiment. "I bought this car for a quarter of what it would cost to build it. I dont get the appreciation that i built it myself, but I also dont get the financial backlash or physical and mental exhaustion that I would have put myself, my father, or more importantly my over-generous friends who I have drained on any build I've done before. This way, father-son time is spent at car meets enjoying the car rather than fighting with the car in the garage."  And to be fair, it's quite obvious Joe knows how to build one hell of a car; he's certainly not short-changing himself. 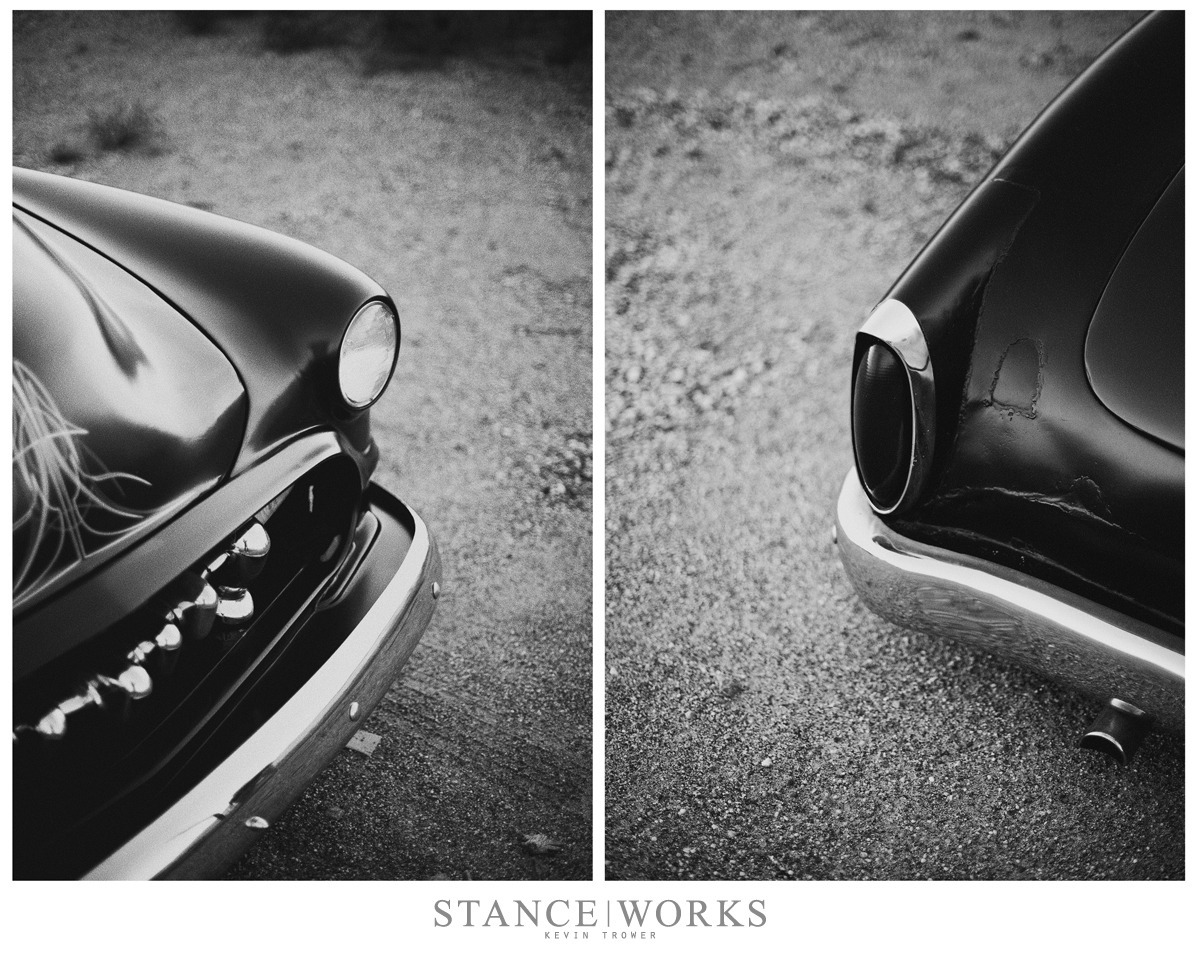 Joe and his father did, however, put in some work to bring the car to its current state. "We did a lot of tinkering to it to make it better. We fixed all the door and trunk poppers, painted the door jambs, and all around cleaned up loose ends in the cabin and trunk.  The only change that may happen in the future is we may strip the body and paint it correctly... right now it is a ten-footer.  Maybe even a gloss paint job." Outside the car, Joe and his father had pinstriping laid by the "One Armed Bandit" to bring a bit of character to the exterior. 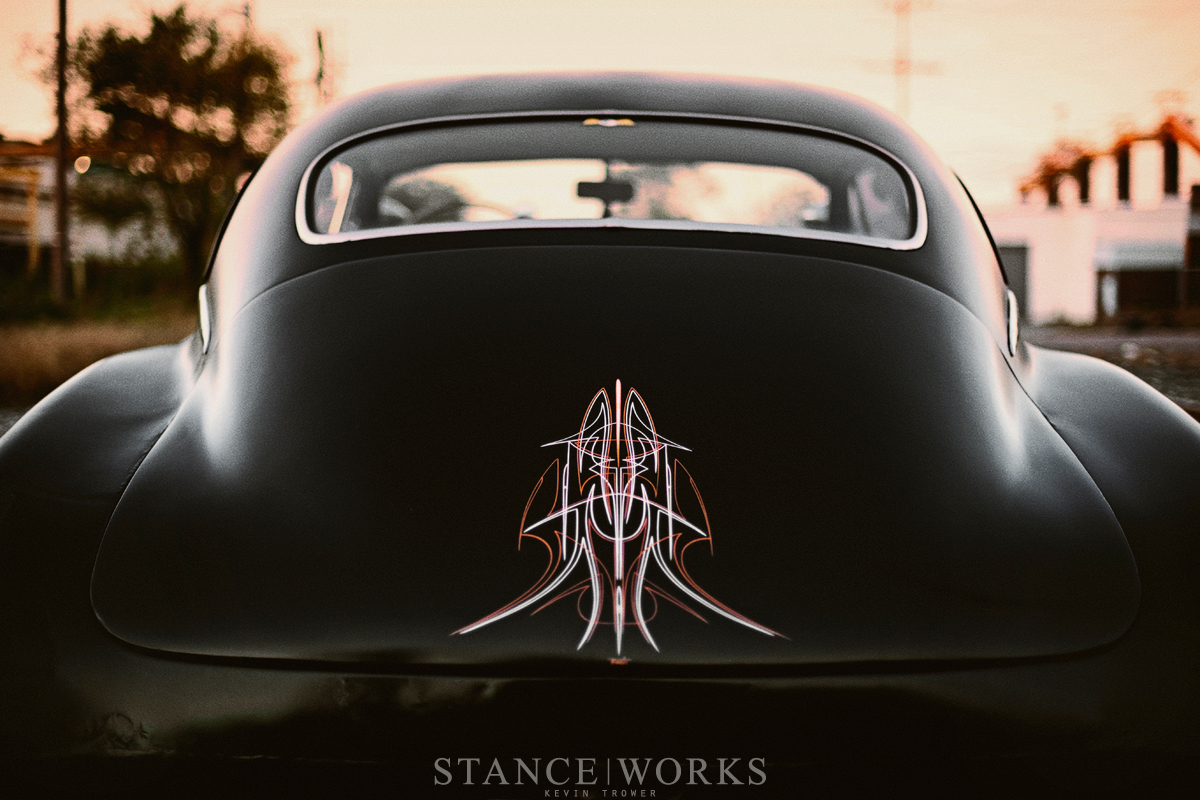 And now all that's left is for father and son to enjoy the car. Their garage tinkering has allowed them to tie up loose ends and polish up a car they can take pride in as their last and final project. Joe promises much more to come from his own shop, and we're more excited than ever to see what's next. 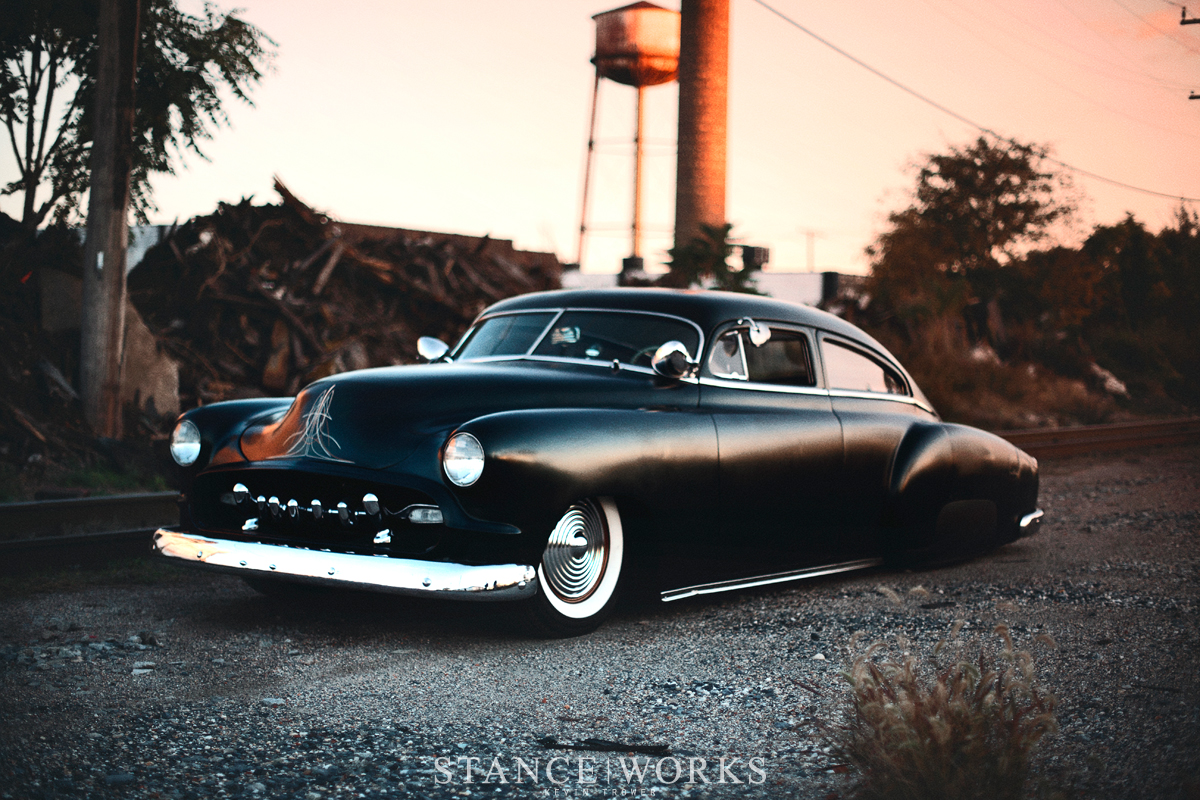