When we first saw Joe Dale's 1969 W114 Benz more than a year ago, it was, by all definitions, unique. It sat atop a set of MAEs and featured a hand-built brushed, cleared, and louvered hood. The paint was a dull brick color and had a classic patina that had worn through in many areas. The parts played off each other rather well, and for the casual enthusiast, the style could be considered complete. Yet Joe caught us, and the rest of the scene, entirely off guard this year with the unveiling of his latest work this year at H2Oi. 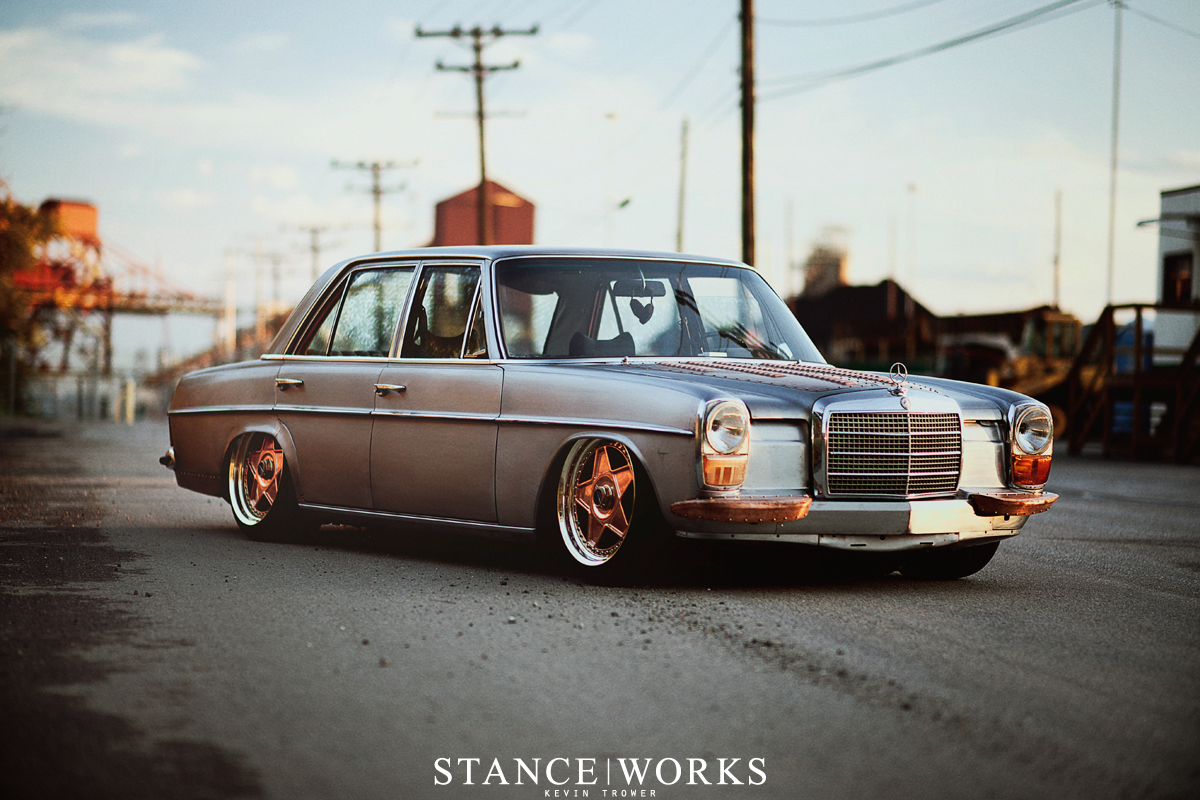 Our first taste of what Joe was up to came just a couple of months ago. His wheels, a one-of-a-kind-set of Modena Autostradas featuring copper-plated centers and brass-plated lips, made their way to the internet in the form of assembly photos. Unsurprisingly, they went viral in the car community; these days, it proves tough to make wheels stand out without loud or tacky colors. That's not to say our initial reaction was positive -- I met the photos with substantial skepticism. 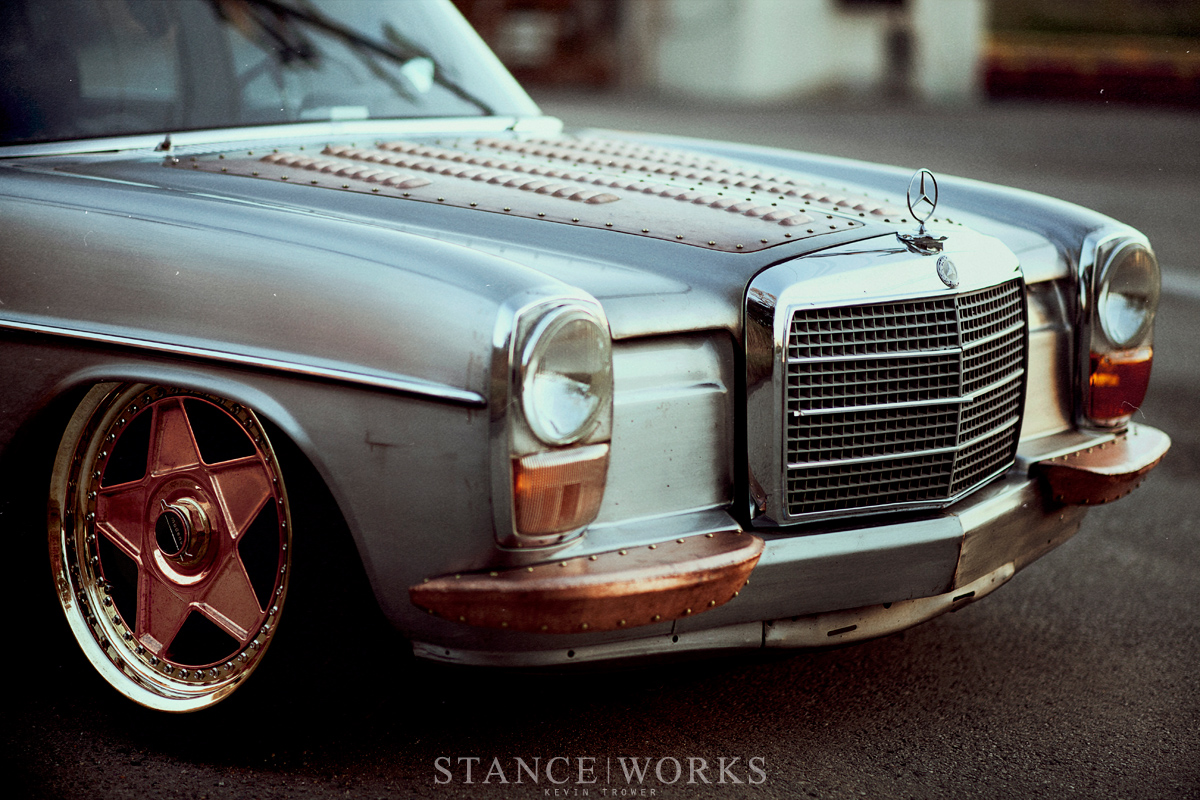 I couldn't imagine what car these wheels could go on that would look like anything other than a cry for attention. "Look at me, I'm thinking outside the box!" I thought. I pictured them on an otherwise stock Golf on air, which while unique, simply wouldn't hold my attention. Yet, I was stunned when I happened upon Joe's W114 in a restaurant parking lot. I quickly realized Joe is a man of details. 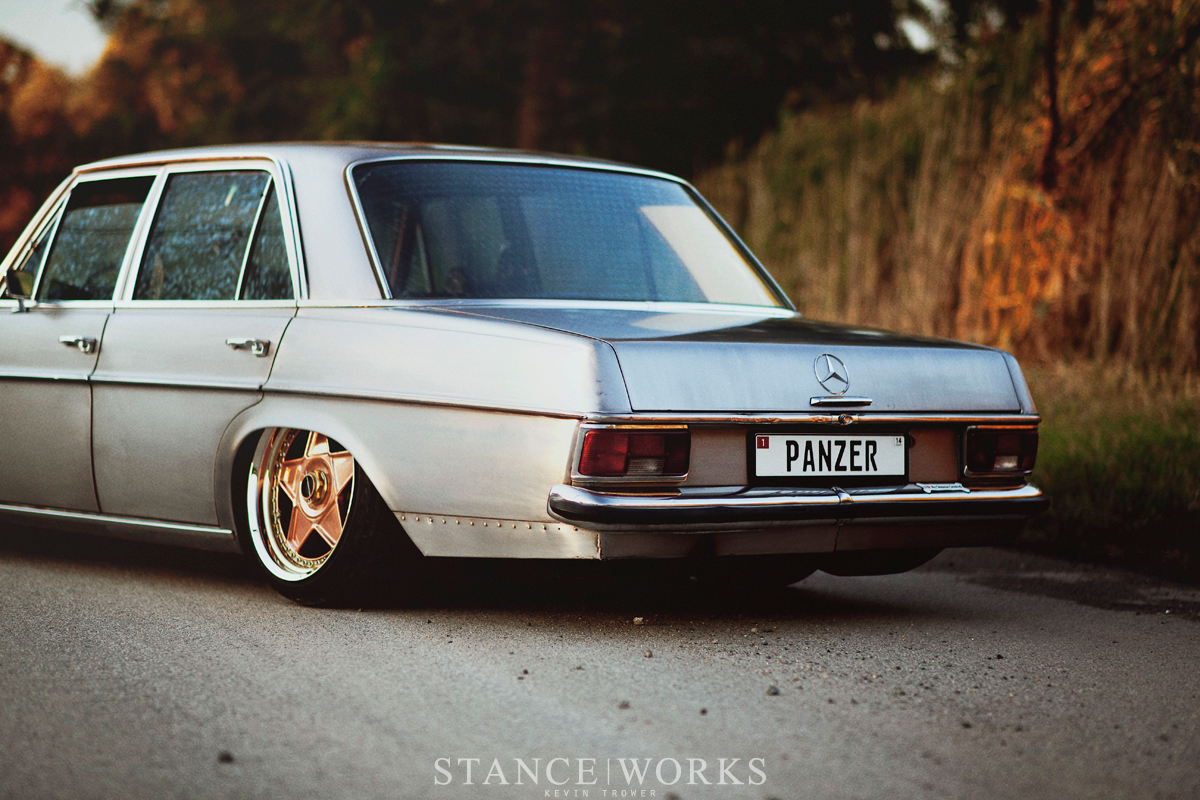 My attention wasn't captured by a single aspect of Joe's car. Instead, my eyes diverted to a new facet of the car every few seconds. Joe's car is a complete package; however, he tells me it's far from done. It all began with the hood. Needing a fab shop for the sake of tools and space to work, Joe went to his friend and previous employer, fabricator, Jon Miller. The pair came up with the idea for the hood which utilizes recessed copper panels with louvers and riveting. The boys used a Pullmax machine to recess and prepare the hood, and then crowned the copper panels with a planishing hammer to get them to the desired shape. Lastly, the louvers were stamped, and the underside of the hood was strengthened with dimple-die bracing. 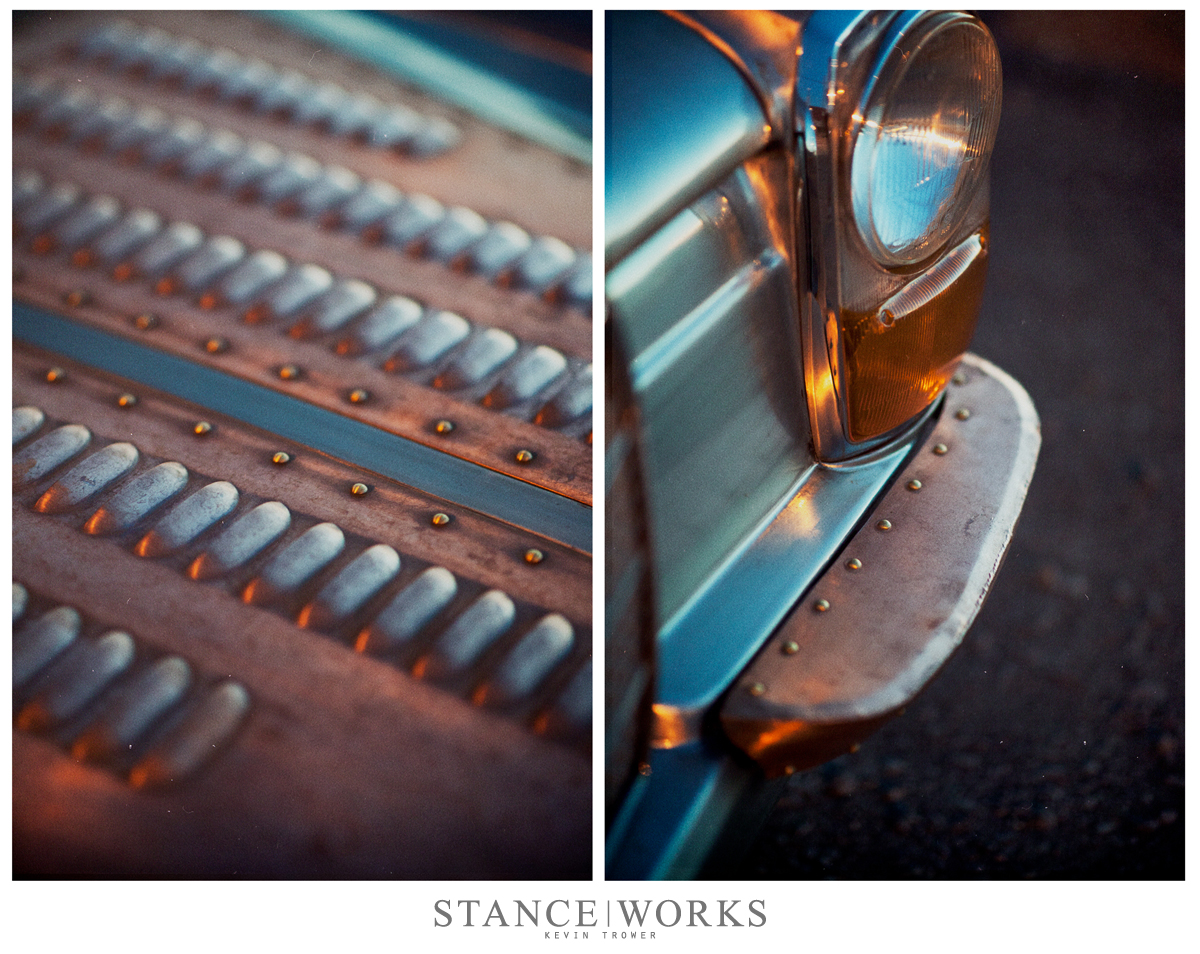 With a labor intensive yet jaw-dropping hood built, Joe wanted to carry his "steampunk" vibe throughout the rest of the car. Immediately noticeable is the matching pair of bumpers, built once again by Joe himself. He insists he wants to give them another go, unhappy with their end result, but I can't say I understand. "I formed them as I welded which left them sort of twisted.  I should have buck formed them and tacked them but I was under the gun and under the knife using someone else's equipment." Understandable, with nearly 150 hours of his own labor poured into creating the hood and bumpers. 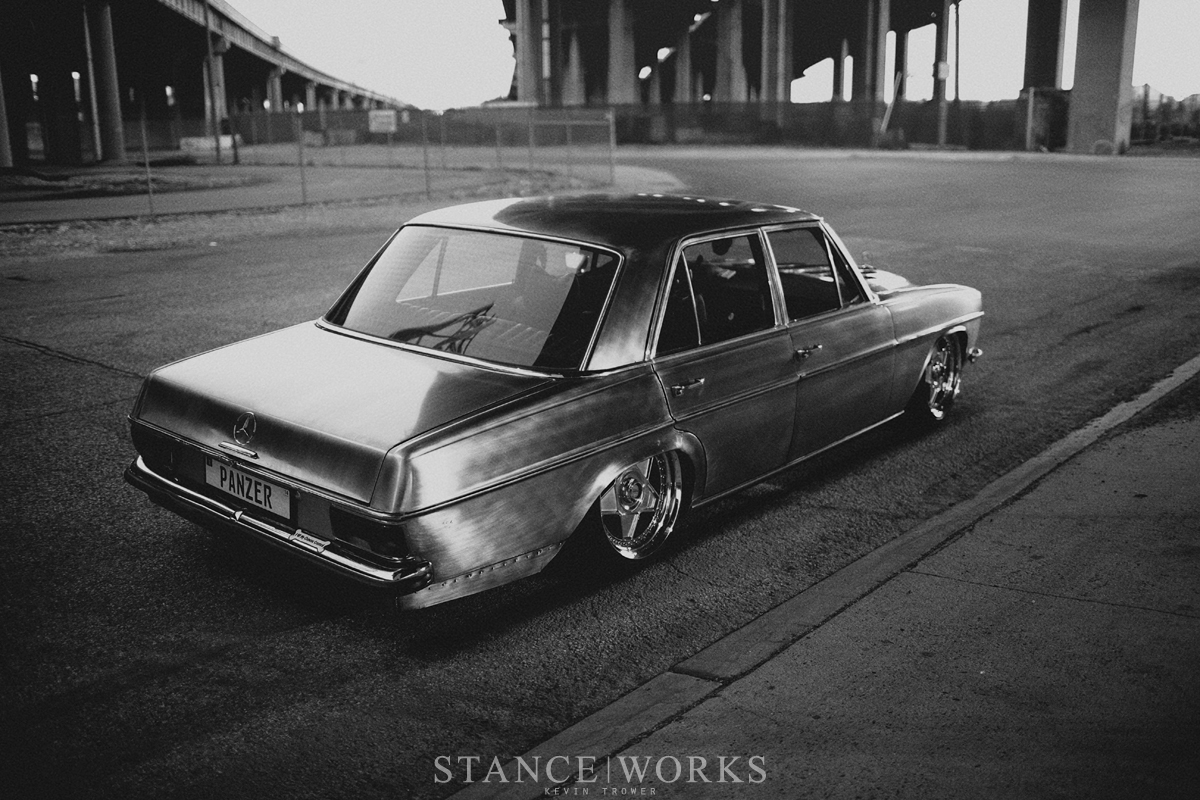 To continue with his idea, Joe stripped down all of the paintwork, only to find the panels loaded with body filler and the quarter panel rather un-straight. The quarter panel was cut off, re-aligned, and tig brazed back onto the car for the right effect: he was after a very particular aesthetic; the look of raw, brushed stainless-steel, and he was determined to get it. He set out to weld up every hole and metal-finish the body to ensure it was perfect, and then attacked the surface with 320-grit followed up with 220-grit sandpaper to achieve a brushed stainless-steel aesthetic. Shaved emblems and markers were a given. 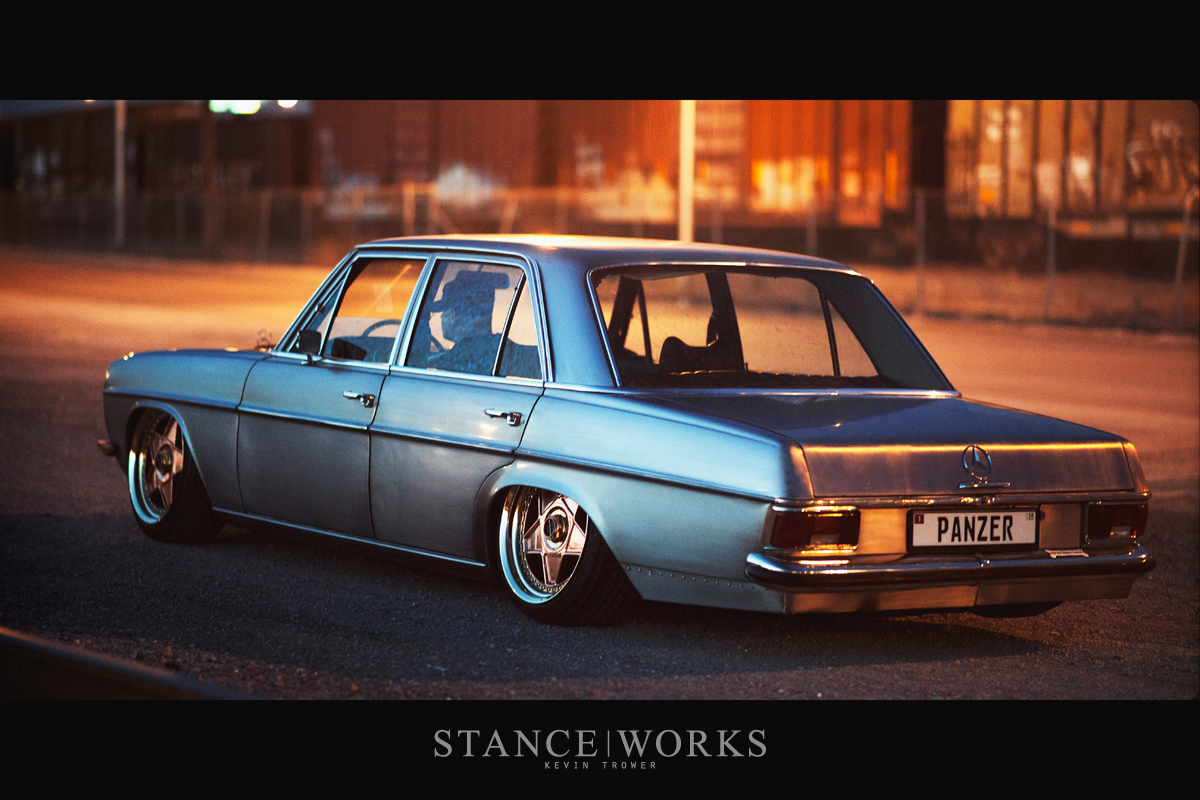 The brushed steel body is clearcoated with Nyalic, a chemical clearcoat agent designed exclusively for corrosion protection. "I wanted to do bare metal for a while... but was worried about the clear pealing off and rusting. Luckily I ran into this guy at SEMA in 2008," says Joe. "I plan on going over the nyalic with a couple coats of flattened urethane to kill the gloss which interrupts that bare metal look."  The wheels fit his desired style perfectly; however, it was no easy task to mount them. Measuring out to 18x8.5 and 18x9.5, they required extensive machining to the spacers and wheel studs to fit. 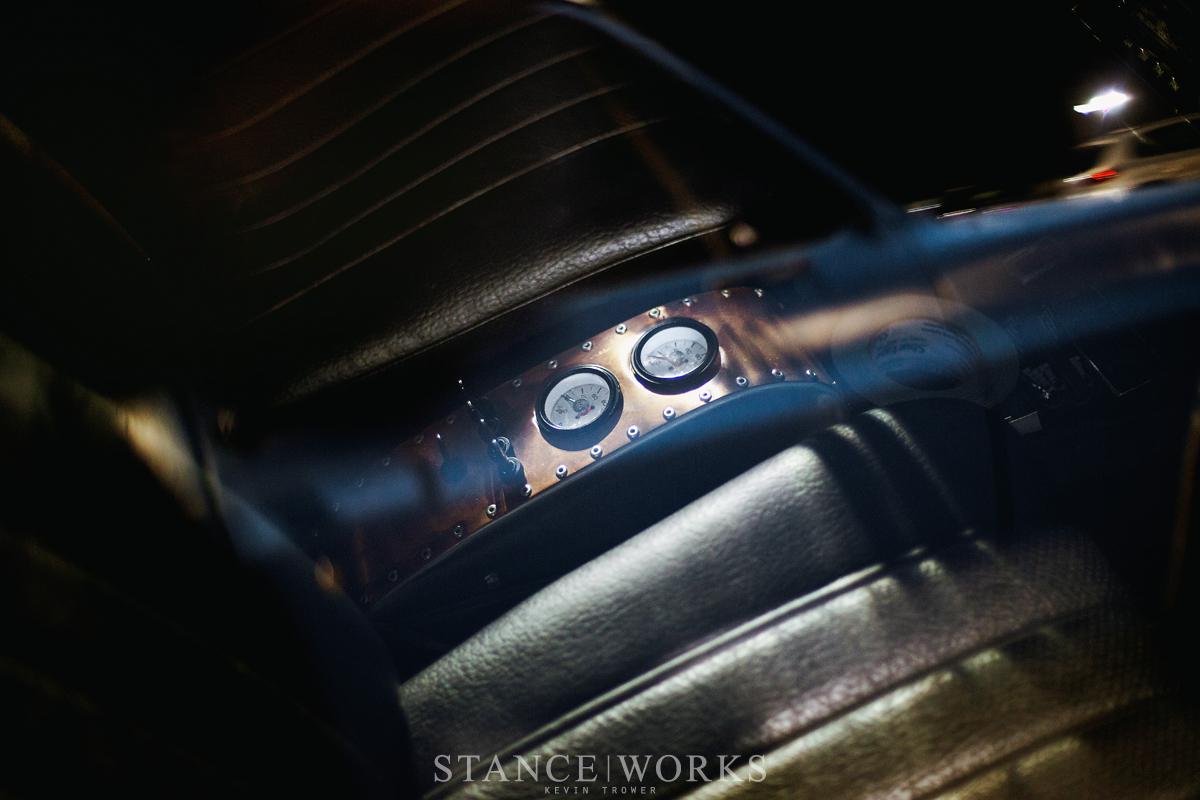 Joe's ideas are carried even further throughout. His center console acts as a housing for his air switches and gauges, only the start of his eventual interior plans. A victorian tin headliner has to top the list as one of the most unique and cool ideas I've heard. Joe plans on hand-crafting a metal dash and console to match. The seats? "Maybe tufted red velvet-wrapped bomber seats with claw and ball feet for mounting." Under the hood, Joe wants the entire radiator, coolant lines, and air system to be fashioned in brass and copper, wrapped around a swapped-in VQ35DE with ITBs, cams, and headers pointed out the fenders. Something tells me there's still much more. 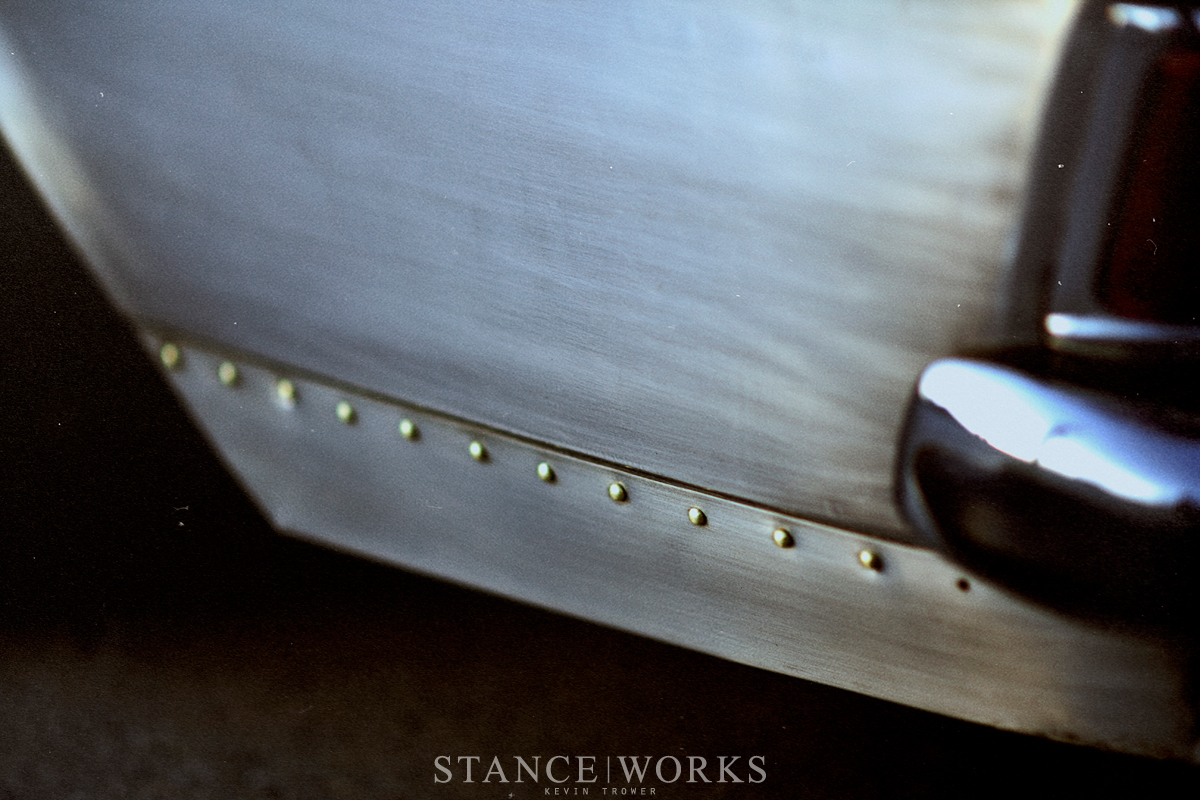 What keeps the steam-powered gears turning here at STANCE|WORKS most off all, however, is Joe's overall automotive enthusiasm. One might assume from this car alone that Joe's a bit of a hot-rodder at heart, and they'd be right. But, Joe is so much more. In fact, parked in the garage next to his W114 sits a Ferrari Challenge Stradale. Next to that sits a 1950 Chevy chopped top custom, a Corvair pickup, an E46 M3, and a VIP built LS400. Joe's the kind of guy who can't help but dabble in all parts of automotive culture, and that's the kind of attitude that exemplifies what S|W is all about. And as evidenced by the craftsmanship of this benz, he's not afraid to put in some work to see his dreams through. 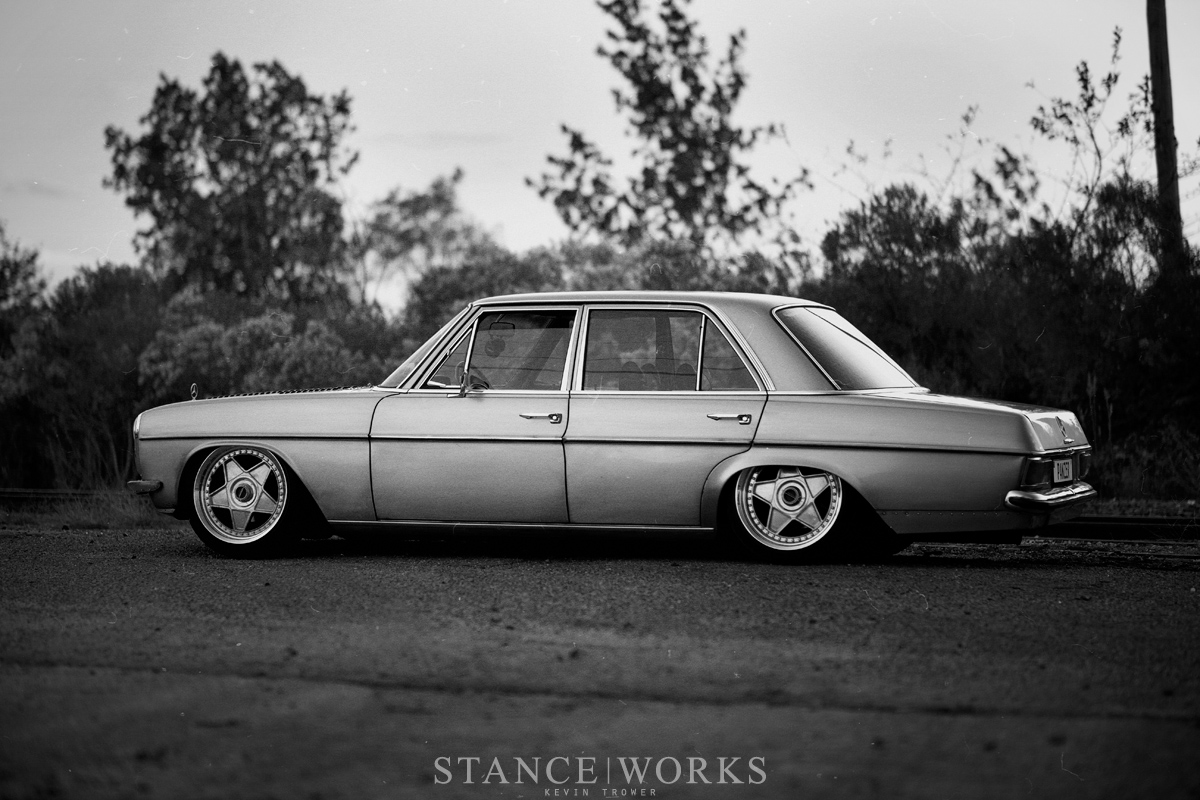 "What does this car mean to me? It's simply a showcase of design and skills. Even though I've had a lot of help and inspiration, I feel like at least I have something that shows off some conceptual aspects of my life. I own a wheel repair company, and I am putting together a studio for a furniture/home accessories business I am starting. This car brings together everything I love aesthetically and seems to be the bridge between automotive genres." 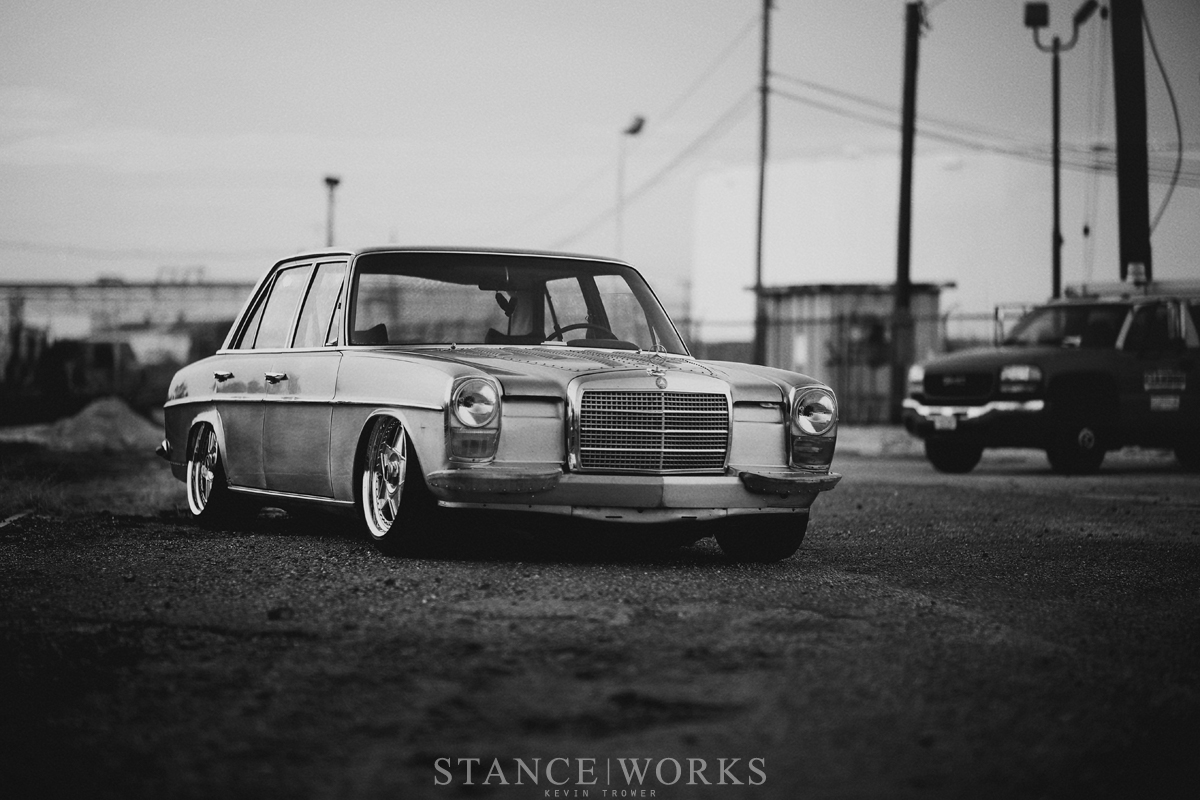