More than a decade ago IND established themselves as the name in modern BMW tuning. 10 years later, they remain at the top, with claims to fame like their recent Ultraviolet M4 and the Blue Ice M235, or true classics like the Dakar E90, or even Project Green Hell. IND has unquestionably set the bar for creating BMWs unparalleled in style, performance, and execution. The latest "portfolio project," as they call the series of truly incredible one-off builds, is perhaps their best yet, utilizing an M2 to strike a balance between performance and power, poise and prowess. The project's name is its genesis: Indroducing Gelbgrün. 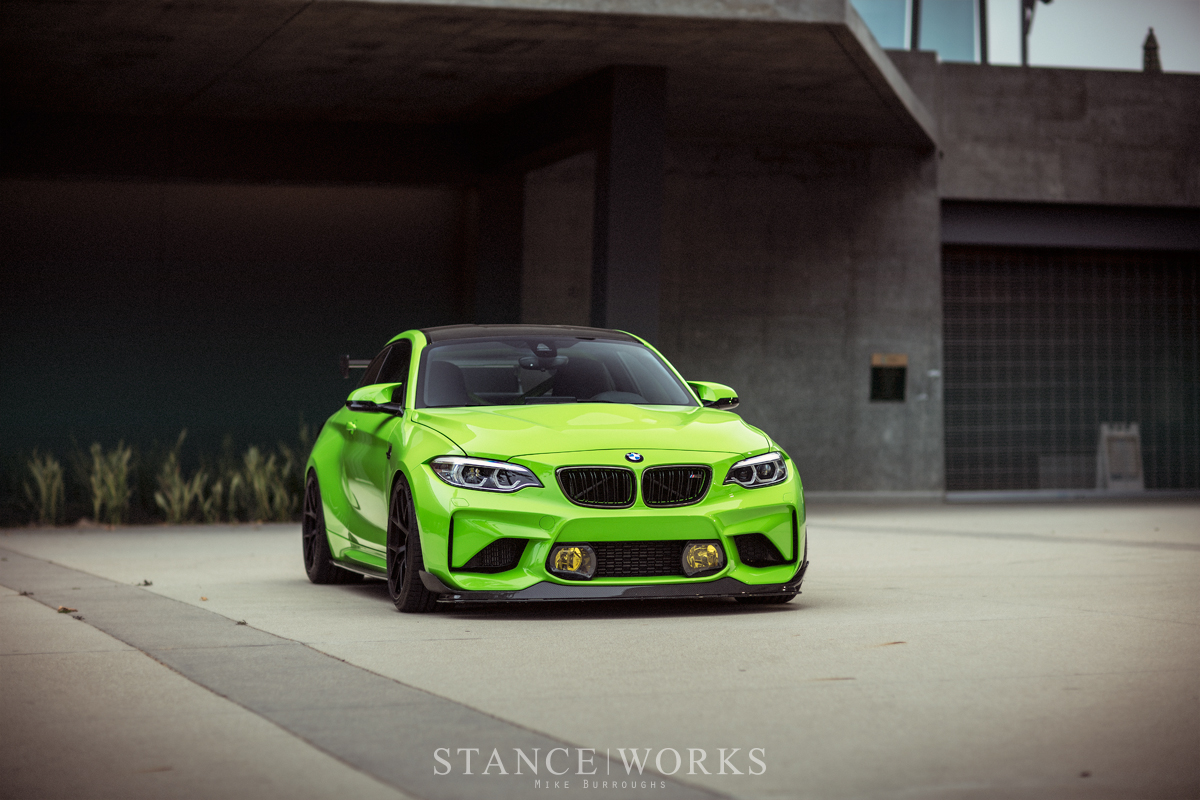 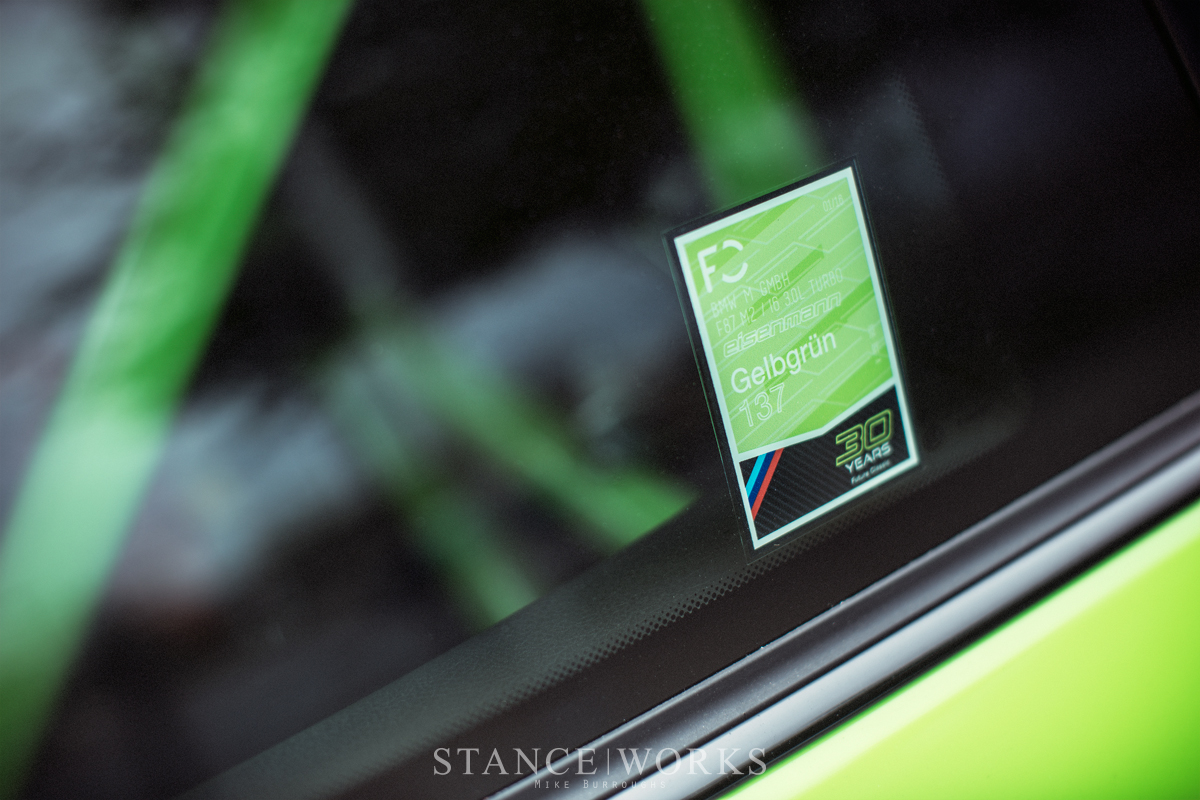 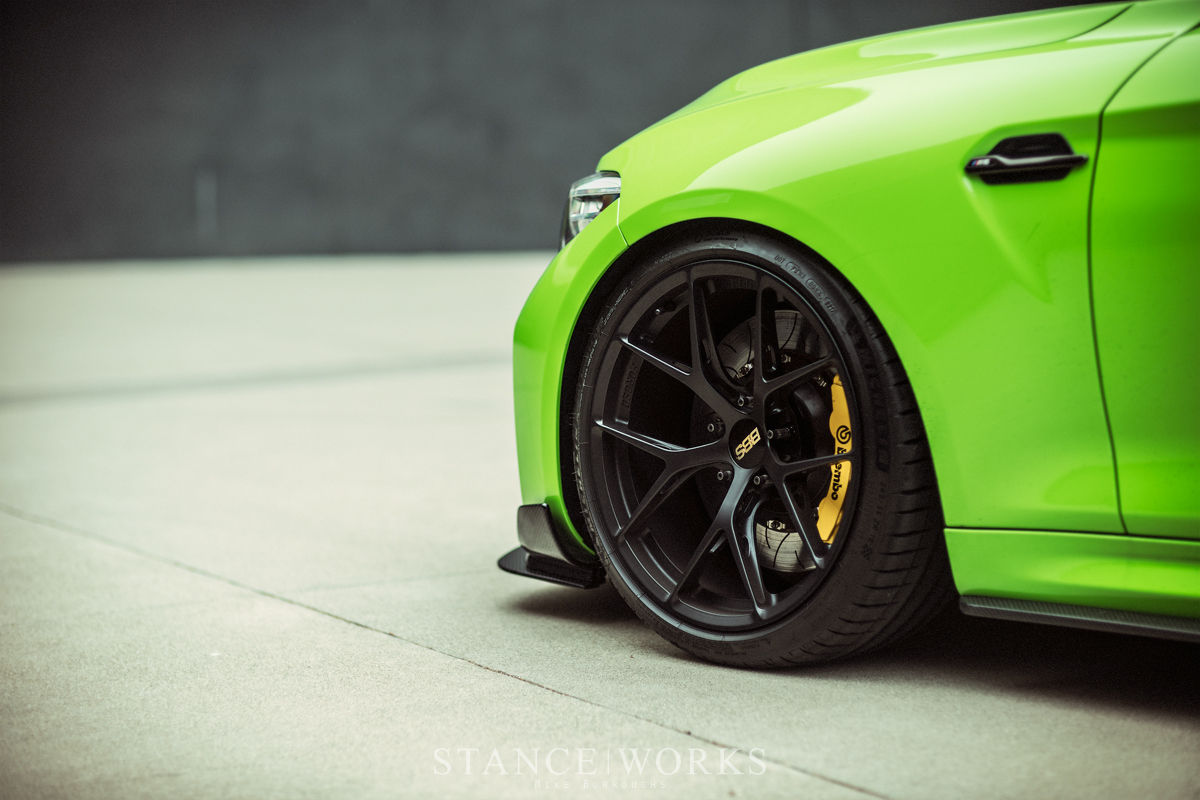 It takes serious confidence to repaint a BMW off the showroom floor. Originally ordered in Alpine White, this M2 was stripped and given the complete respray treatment, including the nooks and crannies. Sporting a hue of Porsche's Gelbgrün, or yellow-green, for the yanks, IND has yielded a car that stands out against nearly any other vehicle on the tarmac. An original color from the Porsche catalogue in the 1970s, and since found on a handful of special cars in the following decades, the color is right at home on a performance-minded yet balance-oriented BMW build, and it was the color itself that helped to guide the build that followed. 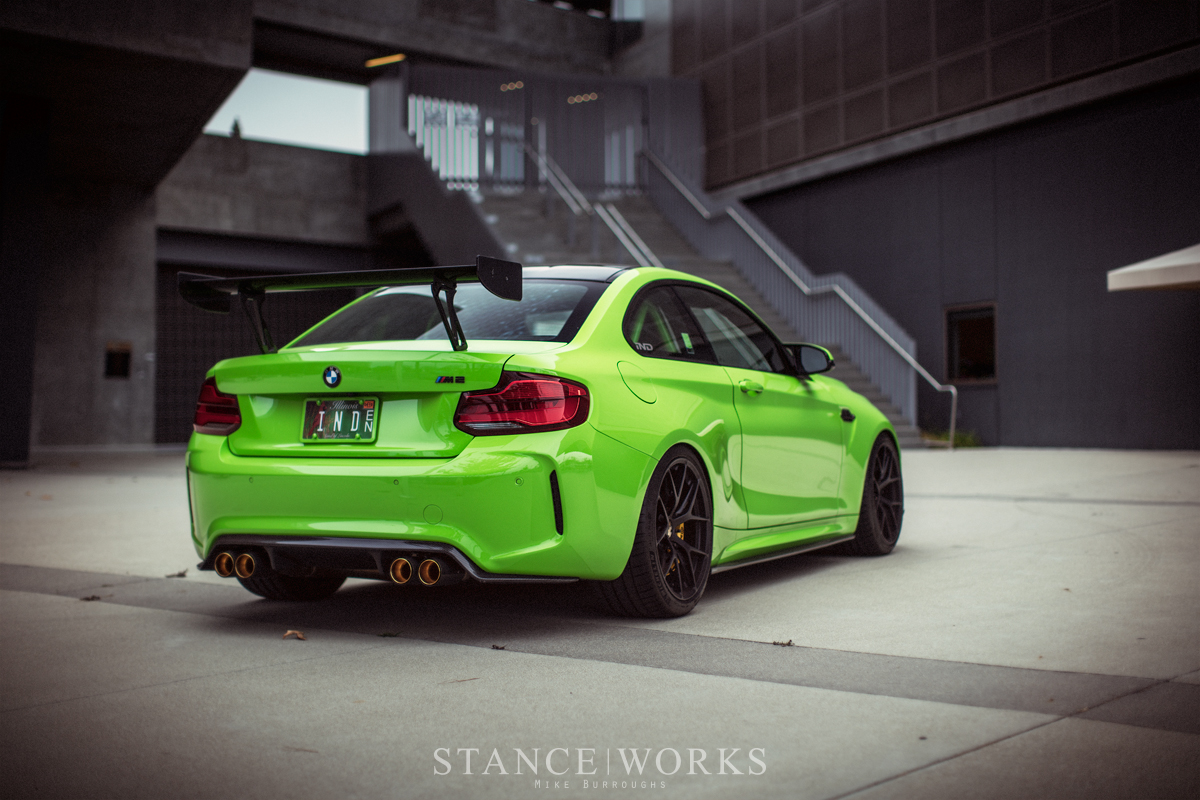 Once the paint had cured, the reassembly process began, and a massive parts list was gathered and fitted to the car. The body of the M2 received a number of changes, most obviously the Euro bumper cover, the 3D Design Japan carbon side skirts, the BMW Motorsport M235iR trunk and wing, and the 3D Design Japan carbon diffuser. New lighting was installed too, using the LCI headlamp and taillamp upgrades directly from BMW. 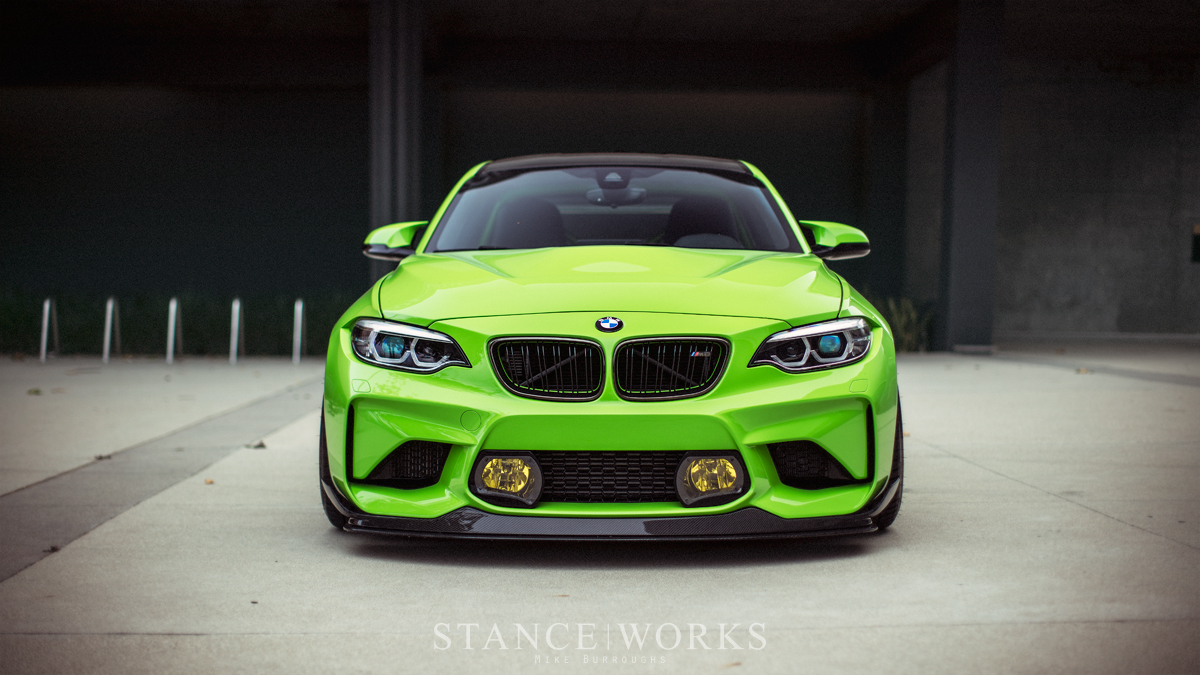 The nose of the M2 has been clad in carbon thanks to an RKP GP carbon lip and splitter. IND Black Chrome kidney grilles, side markers, roundels, and emblems help to play off of the car's black carbon fiber trimmings, too. F80 M3 OEM mirrors were installed to the car, helping to add a tinge of aggression and functionality. 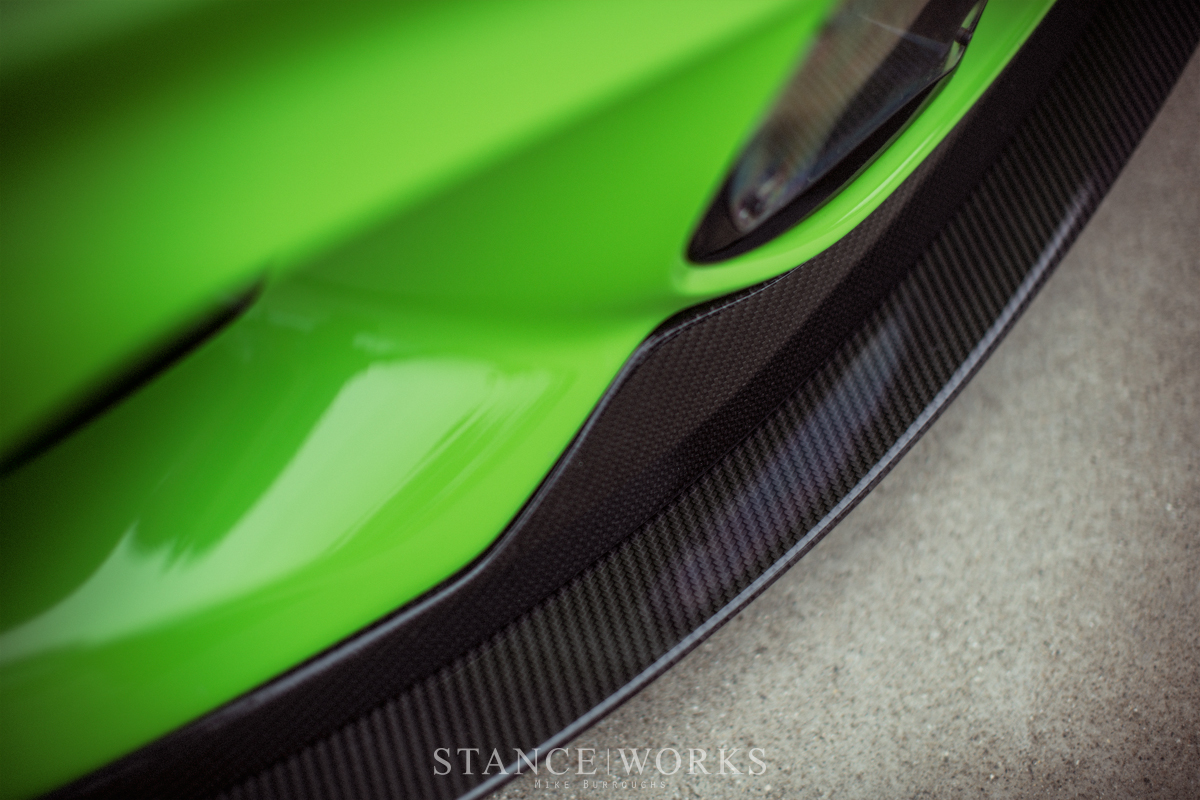 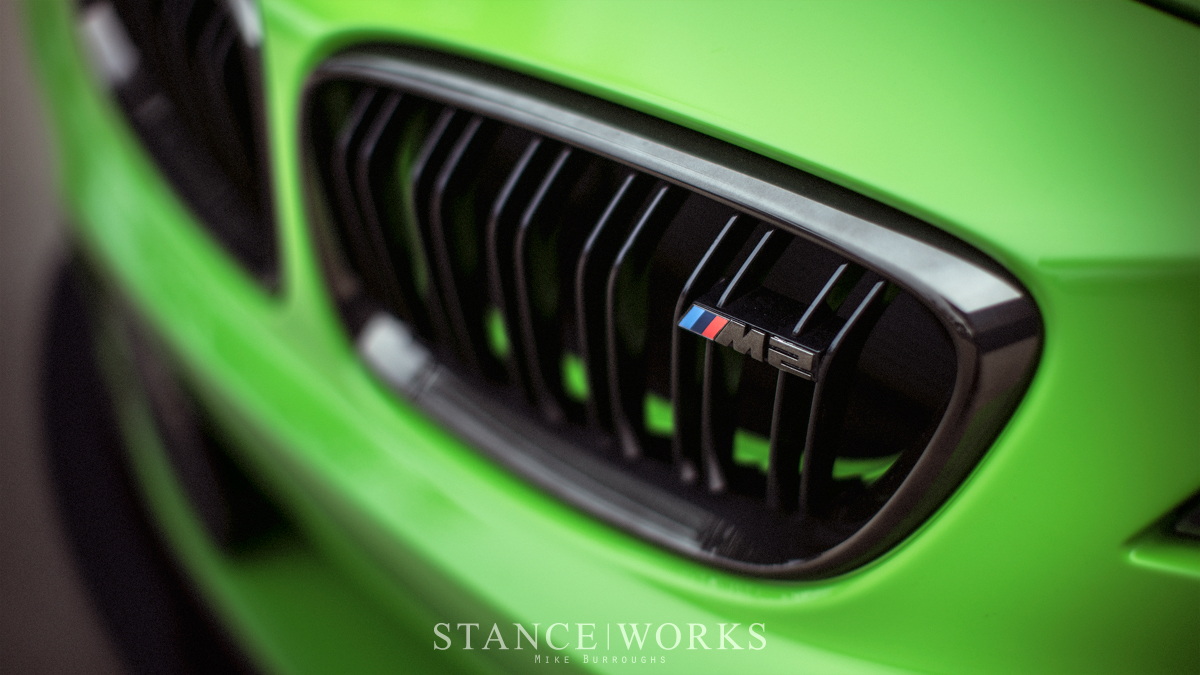 A centerpiece of the car's exterior build is the inclusion of fog lamps, sourced from the M235iR 24 Hour race cars. Aiming to produce an incredible competition GT car aesthetic for the street, IND masterfully fitted the race car's lamps to the M2, thanks to custom carbon fiber mounting buckets and lenses built in-house. Going above beyond the call of duty, IND also took care to ensure that the fog lamps covered only the end tanks to the car's heat exchanger, ensuring no loss of efficiency or performance from a car meant for real track time. 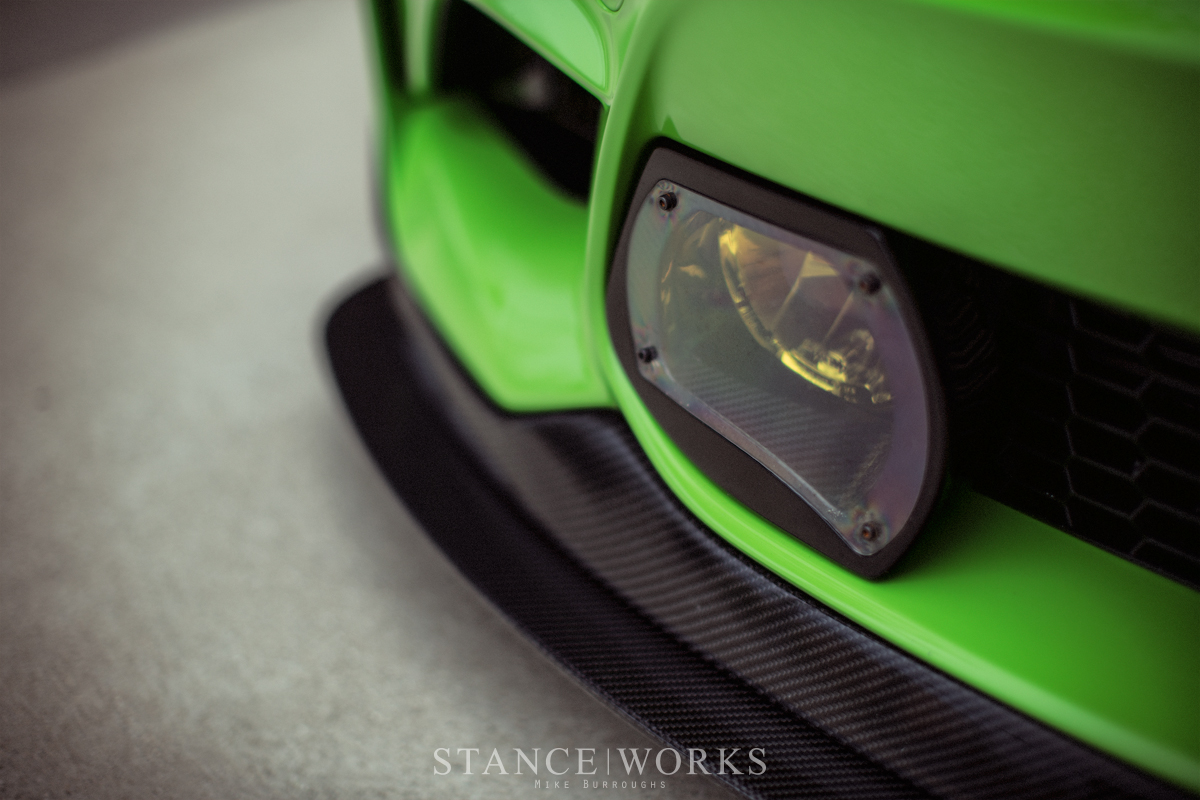 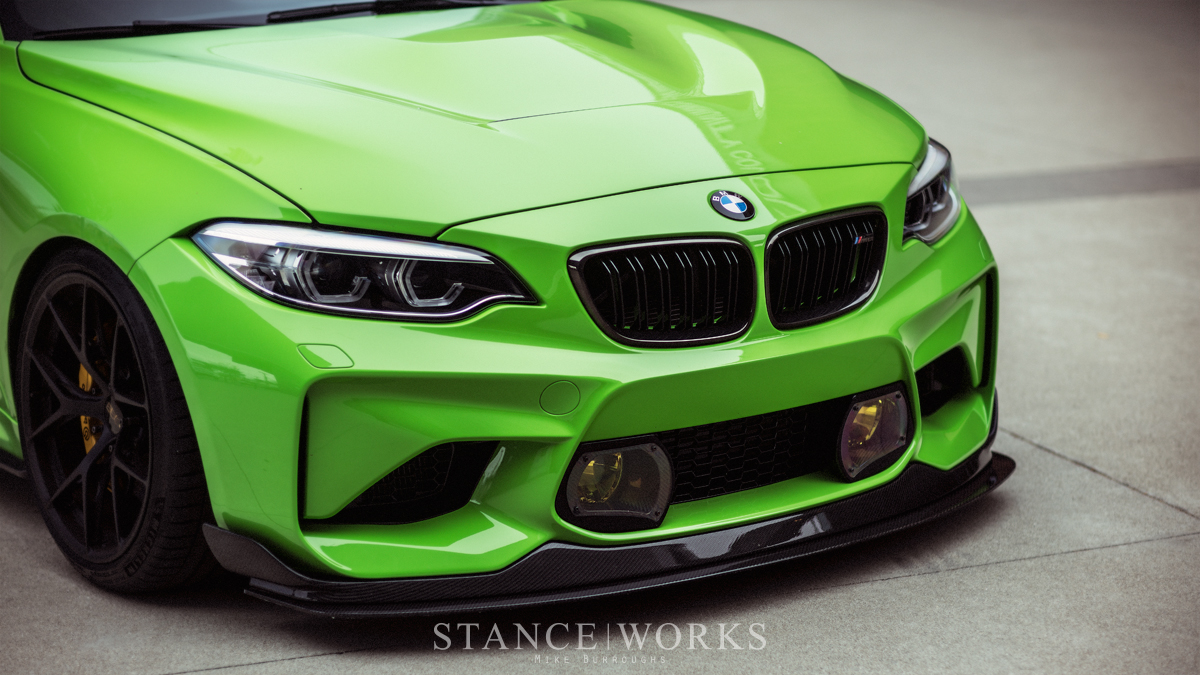 As one might expect from IND, they went to the Nth degree, ripping the factory steel roof from the coupe and replacing it with a custom-designed carbon fiber unit, produced with RKP specifically for the Gelbgrün project, much akin to the famous E46 M3 CSL and the models that have since followed.  Small, more hidden details, such as the IND painted keyhole covers, or the Acexxon rear reflector deletes, help to create a cohesive aesthetic, even when the parts themselves may not be immediately visible, going to show that IND stops at nothing when striving for perfection. 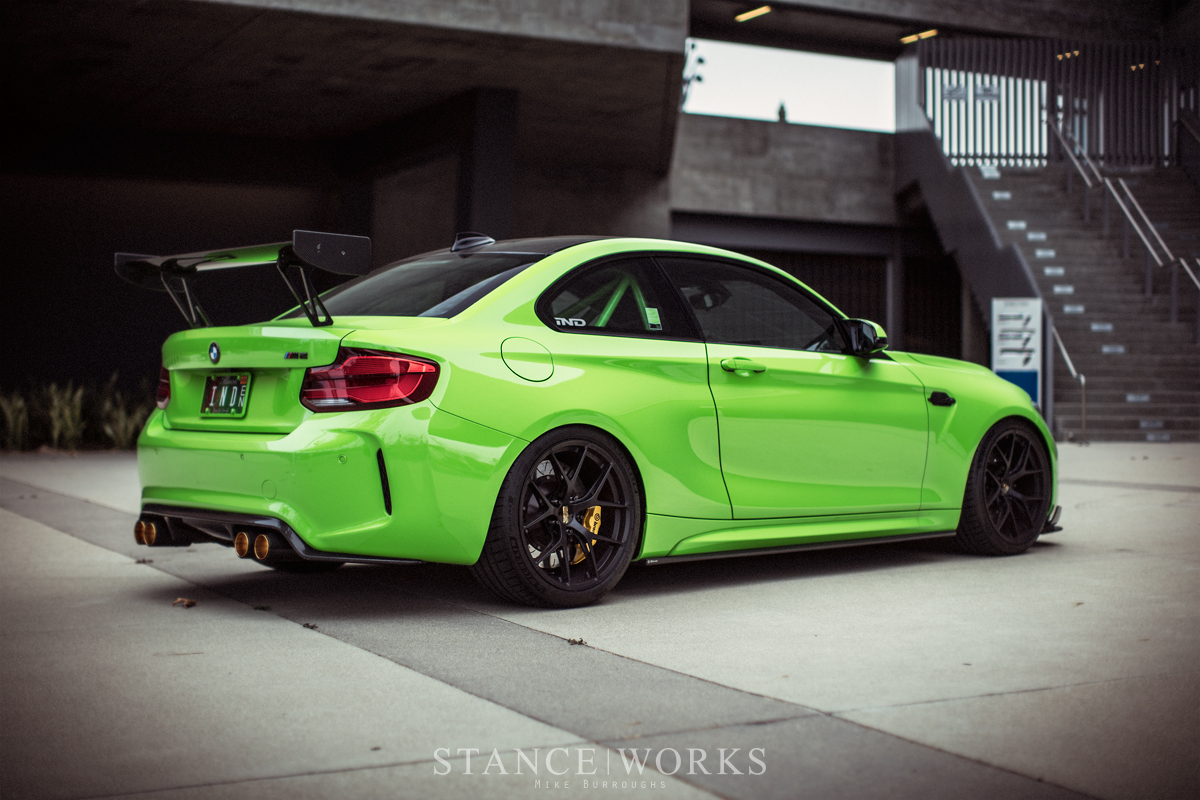 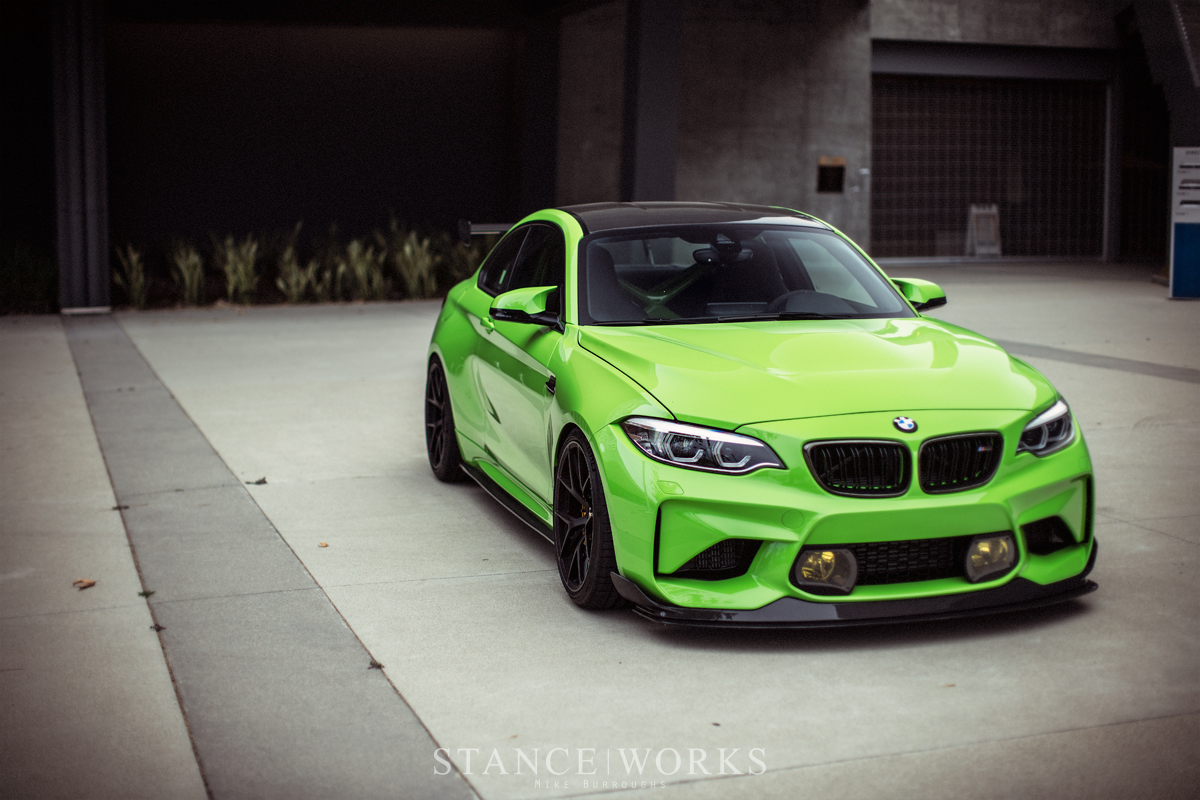 Inside the car, the insanity continues. With an aim of building a car meant for both street and circuit duty, the benchmark was set by BMW's own M4 GTS. Pulling out all the stops, IND fitted OEM M4 GTS Euro seats, GTS Schroth harnesses, and the M4 GTS Fire extinguisher to the M2's cabin. An M4 GTS steering wheel was installed, and Autotecknic DCT Paddles and the steering wheel trim were painted Gelbgrün to match the car's exterior, as well as the BMW Motorsport MotoGP Safety Car roll bar, to bring some vibrance to the black suede interior. An RKP Carbon rear seat delete helps to cap off the back half of the interior, and an Alcantara headliner and rear deck "finish" things out. 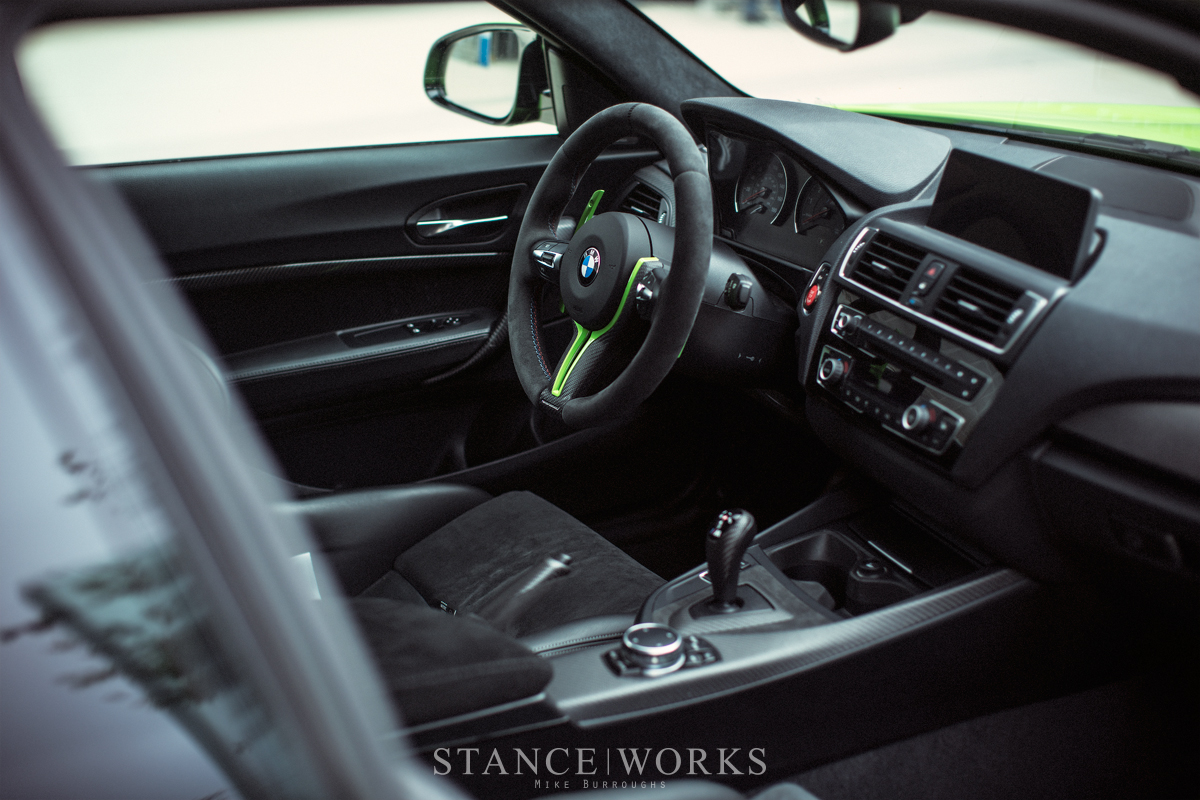 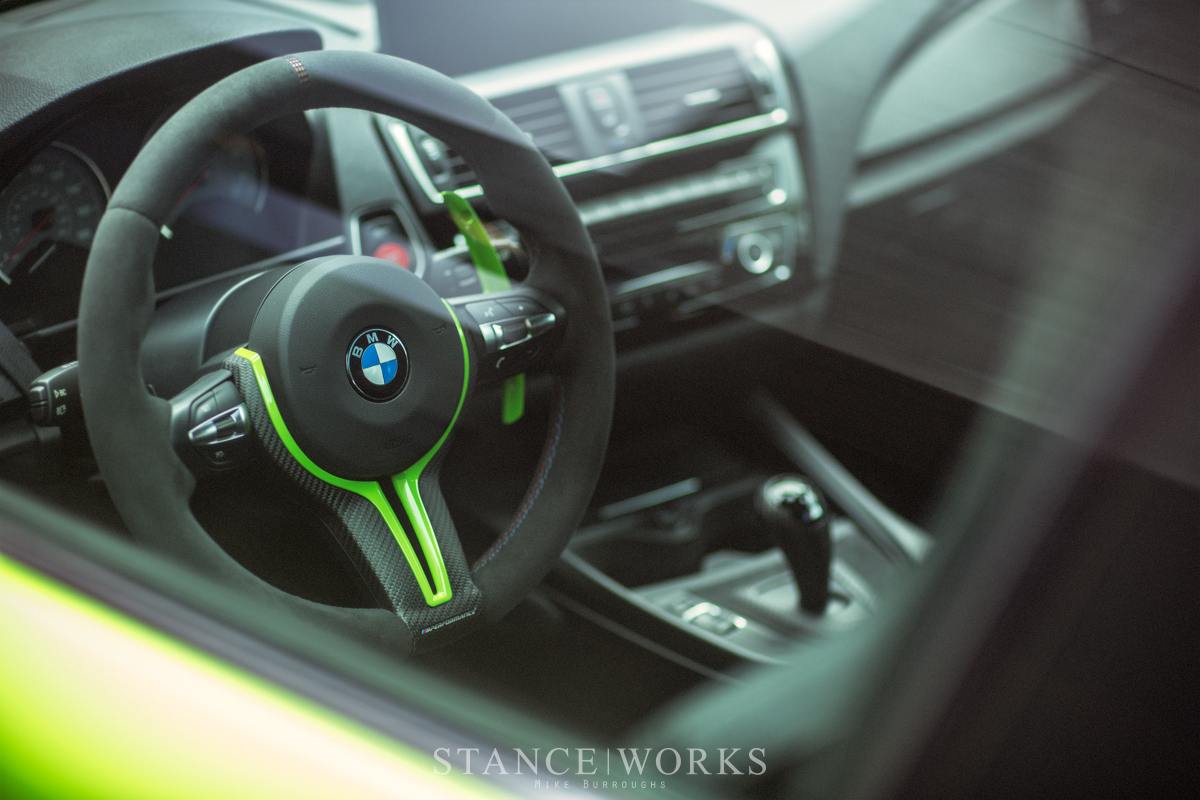 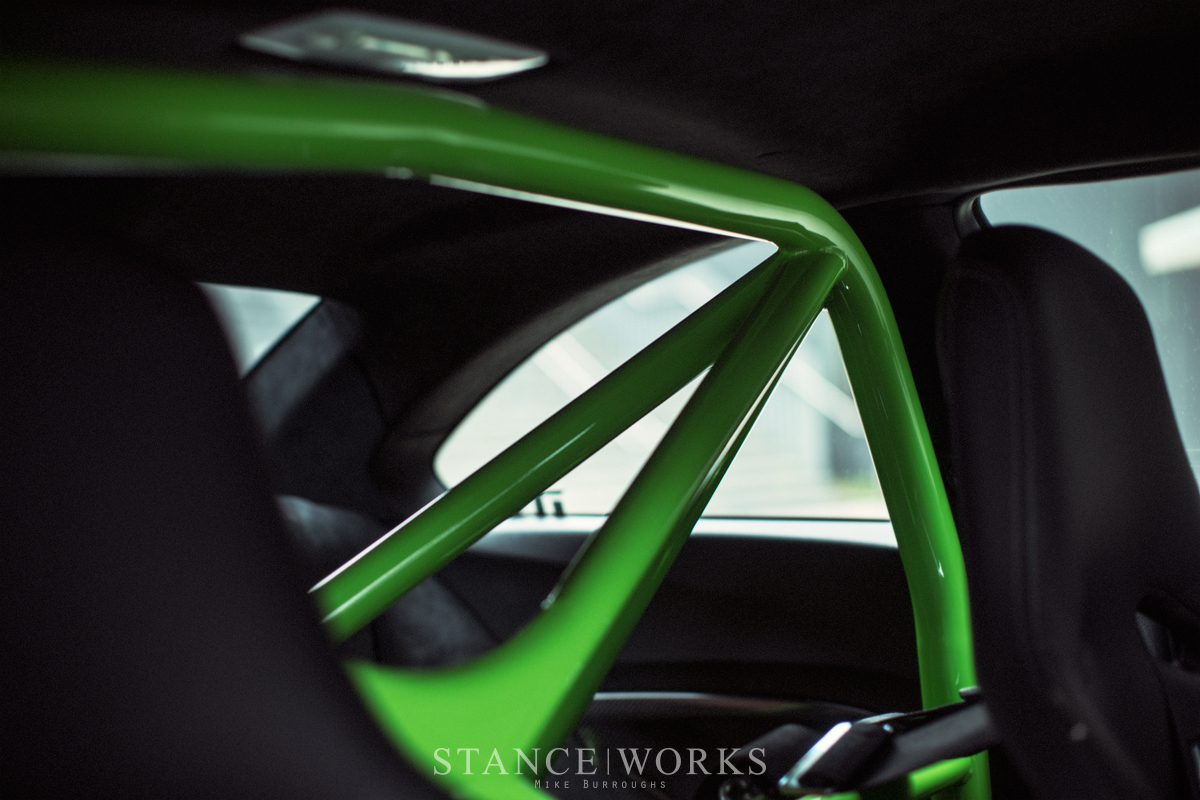 Though, as is typical with IND's portfolio pieces, it's the details that truly bring the interior of the M2 to the realm of madness. The M2's factory blue stitching that carries throughout the door panels, arm rest, e-brake boot, and floor mats, was painstakingly removed, helping to blend the interior with the exterior color. The result makes for a finished product indistinguishable in fit and finish from BMW's own offerings. 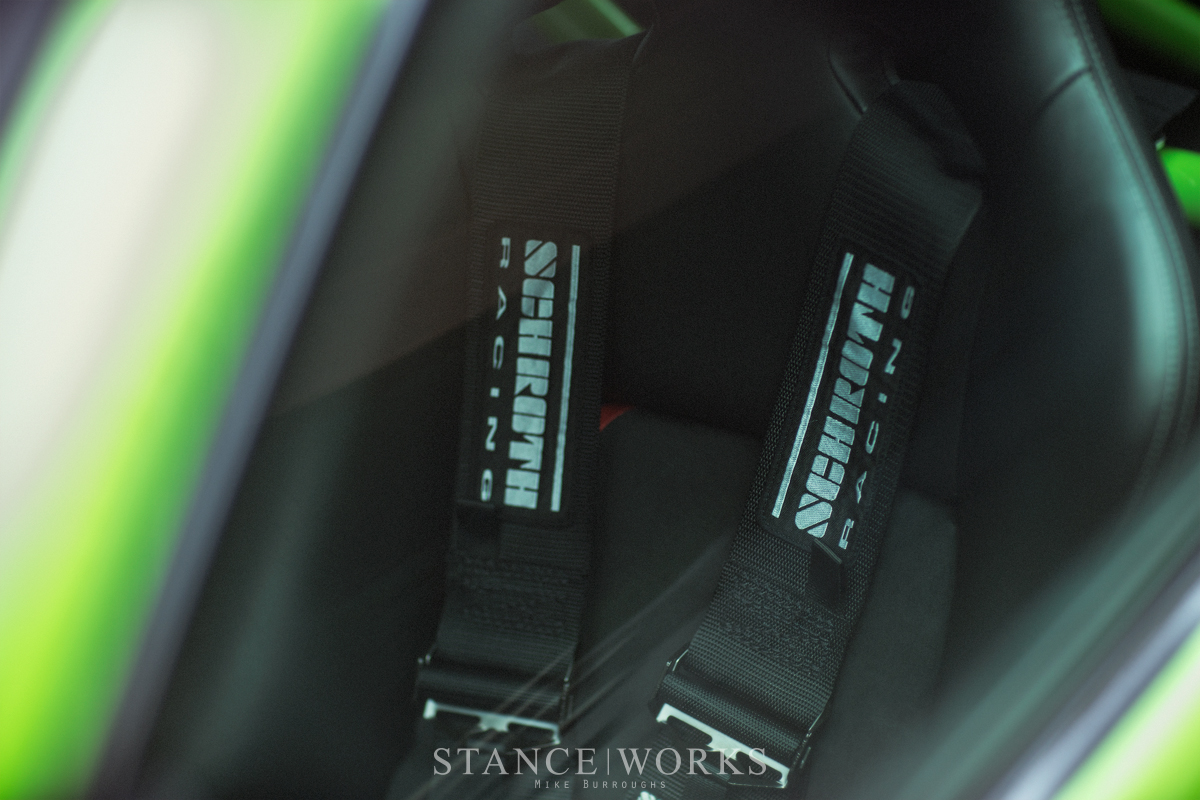 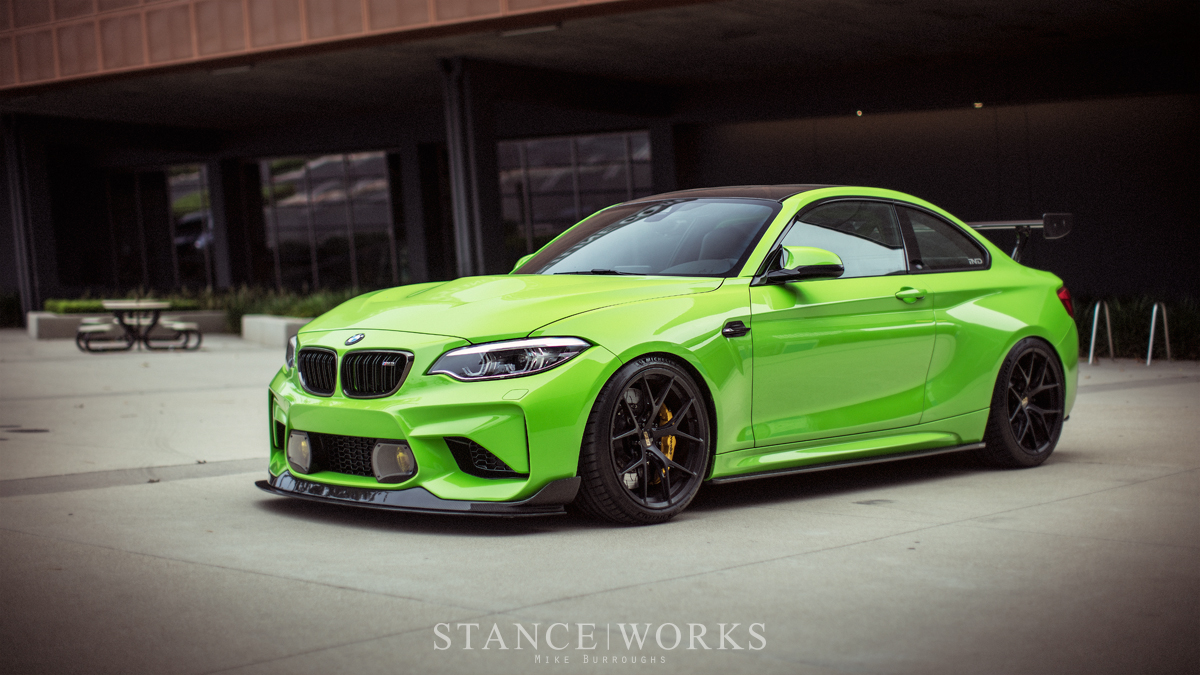 While massive dyno figures are always exciting, IND instead envisioned the M2 as poised between balance and driving dynamics, suited for extracting every ounce of grip and power on track while existing in the equilibrium between performance and everyday usability. For that, IND turned to ESS for tuning. An Eventuri carbon intake, a Dinan Turbo upgrade, CSF cooling components, an Akropovic catless downpipe, and an Eisenmann center pipe and axleback exhaust fill out a performance mod list that the ESS tune wrangles in and harmonizes for incredible drivability. 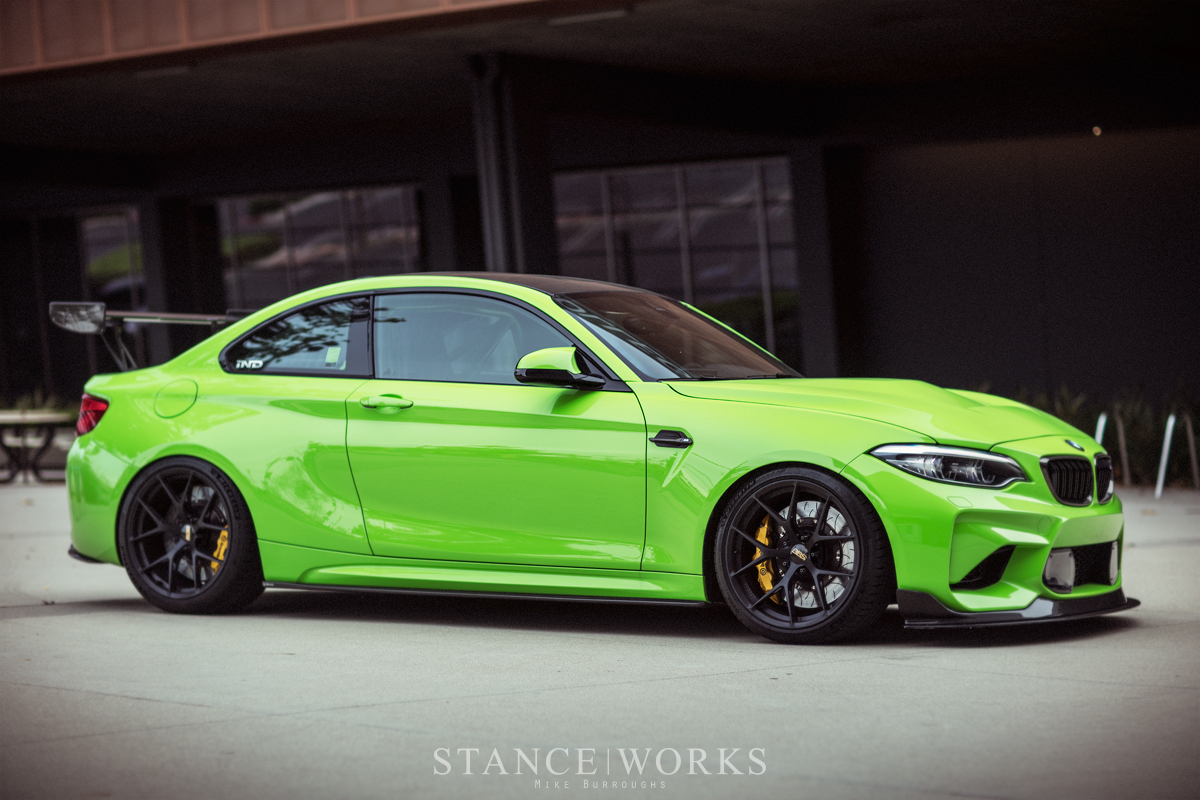 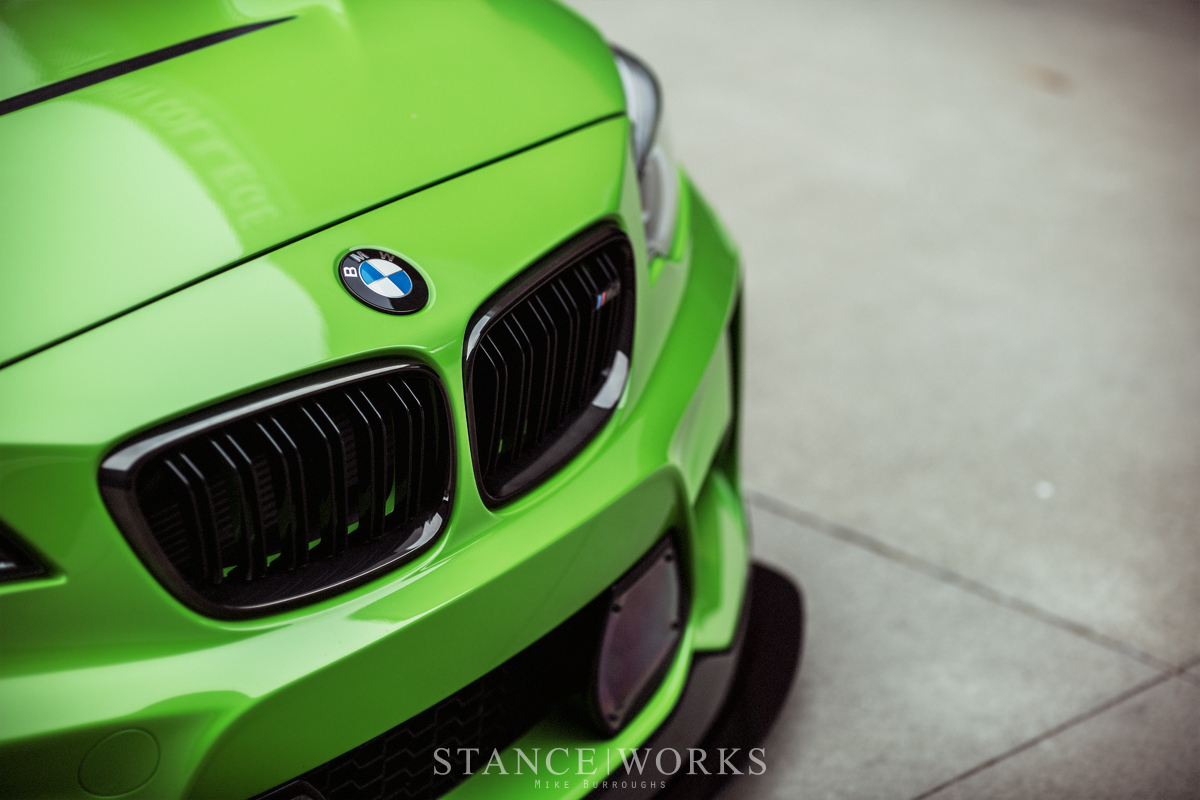 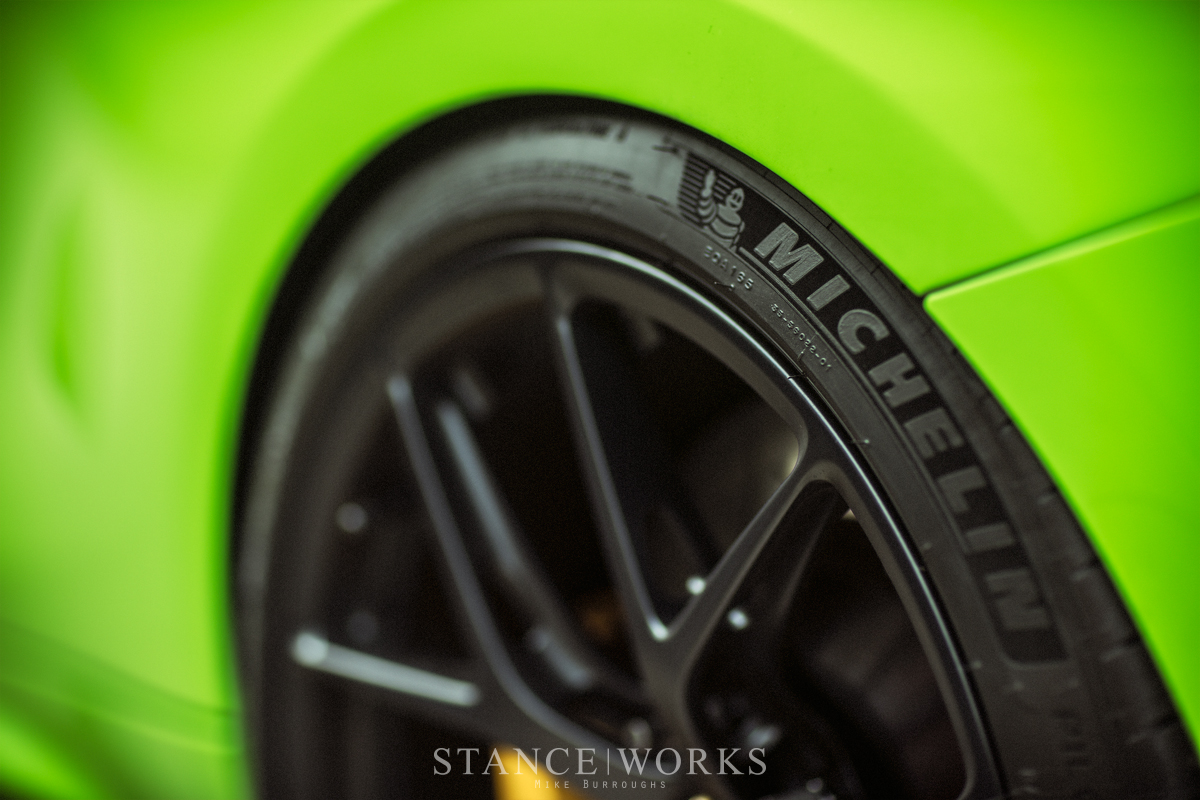 The underside of the car is no different to the rest of the build. Handling characteristics were paramount in building the "ultimate" M2, so IND turned to their longtime cohort, Fall Line Motorsports, for a slew of suspension upgrades. Fall Line Motorsports prodivded a front monoball conversion, front and rear sway bar links, rear upper control arm bearings, toe links, and rear camber shims, ensuring the M2 is set up for maximum traction. KW Clubsport 3-sway adjustable coilovers give the car incredible tunability, allowing the car to offer both ride comfort and compliance.  Finishing out the running gear is a set of Brembo GT 380mm big brakes, installed both front and rear, shown off behind a gorgeous set of 19" BBS FI-Rs in satin black. 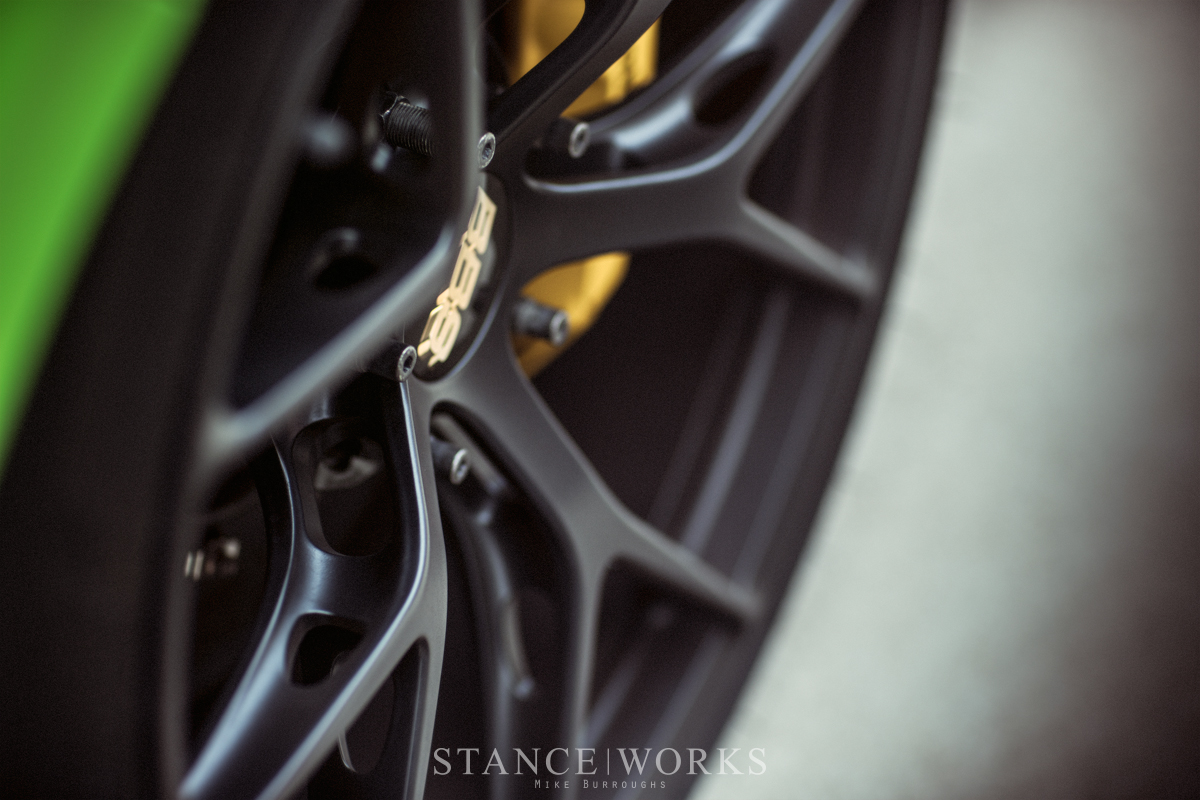 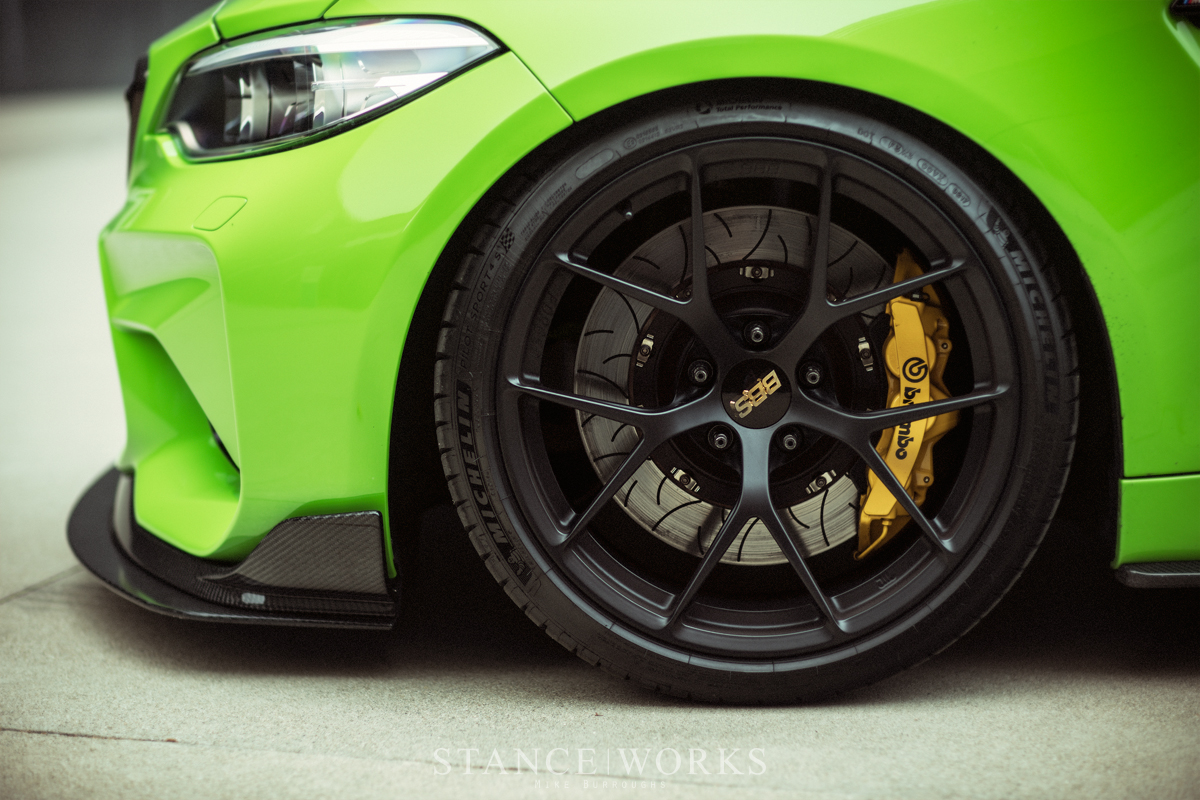 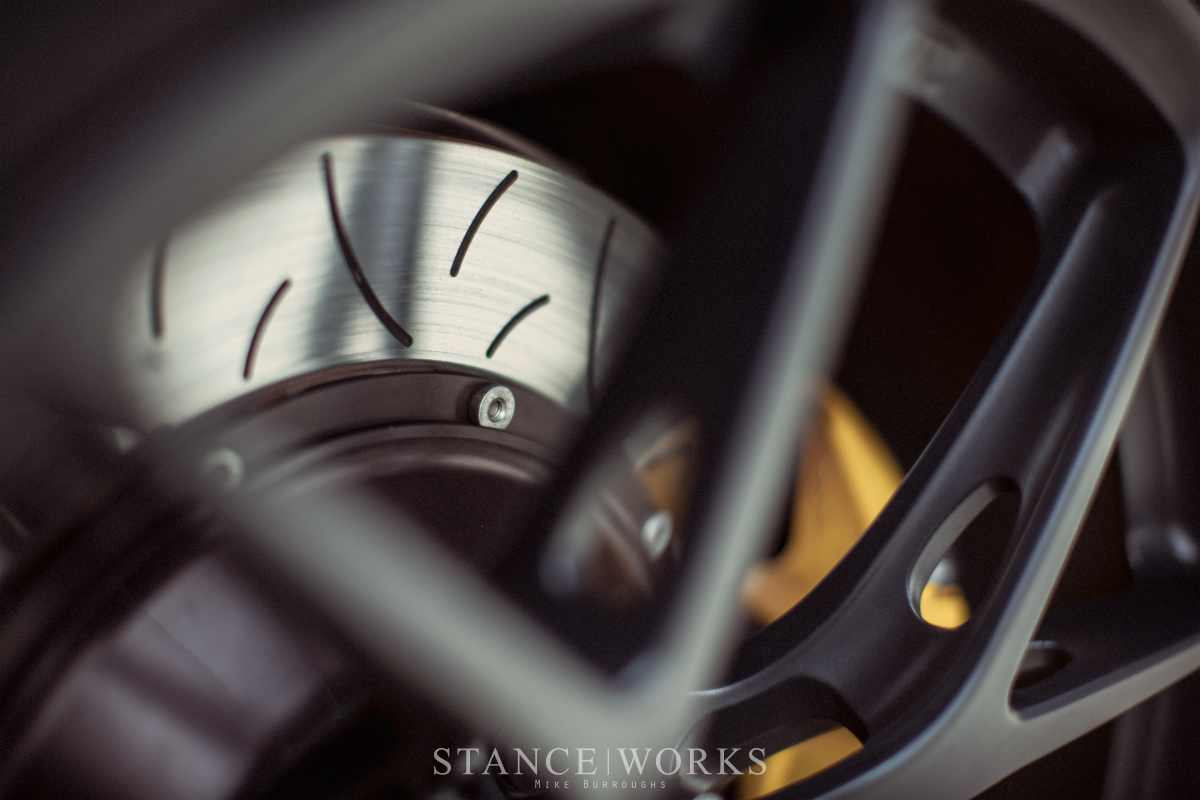 Hyperboles are dangerous and grand claims can often lead to trouble, but on occasion, it's all worth the risk. We're confident in saying that IND has not only raised the bar and set a standard for all M2s to come, they also continue to lead the industry. Now if 2019 would hurry up...  We're eager to see what IND does next. 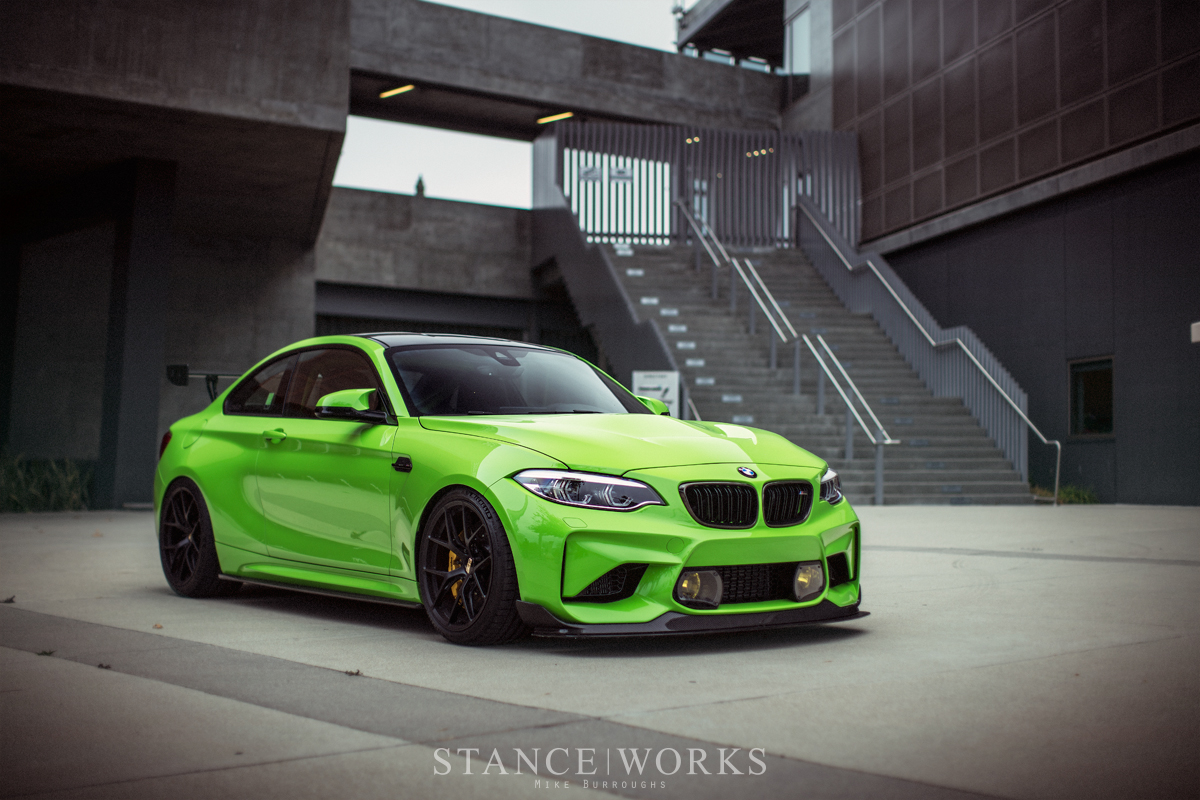