"I'm not really a BMW guy." It sounds downright blasphemous coming from the owner of an Alpina, the real deal. But then again, one look at the car might just reveal some blasphemy too. Alpina isn't known for horseplay, and so the idea of a street-sweeping wagon may be a bit foreign in nature to enthusiasts of the marque. Nevertheless, Ryan Stewart is unfazed, convinced that his take on the high-output estate car is exactly what an Alpina should be. 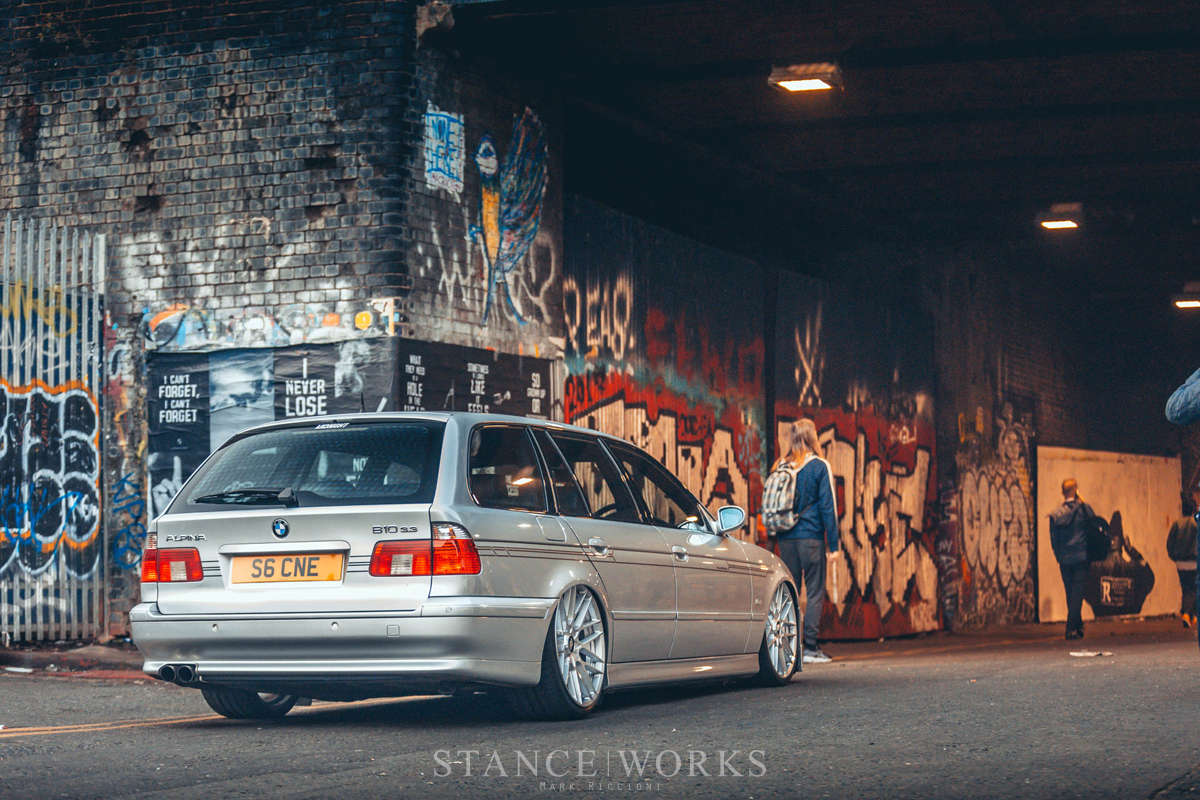 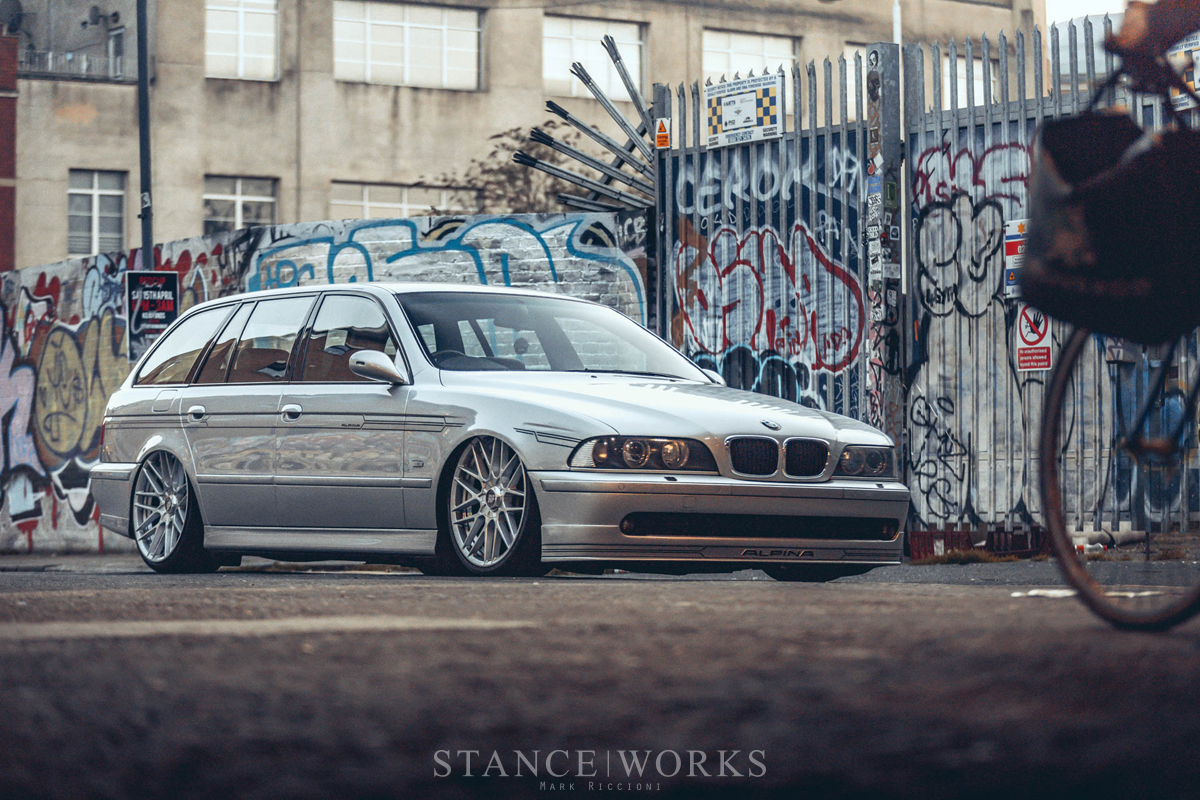 Discovering that Ryan isn't a BMW guy at heart wasn't a complete surprise. He runs within a VW-owning social circle, and his past builds cement that. In fact, owning the BMW came more as a result of necessity than anything else. Following the sale of his Land Rover Disco 3, he sought out something with at least somewhat similar load capacity, and ideally, a bit more power behind the "go pedal." An automatic transmission was a requirement, what with London traffic and a daily commute to consider, and as a final requirement, Ryan wanted something radically closer to the tarmac. 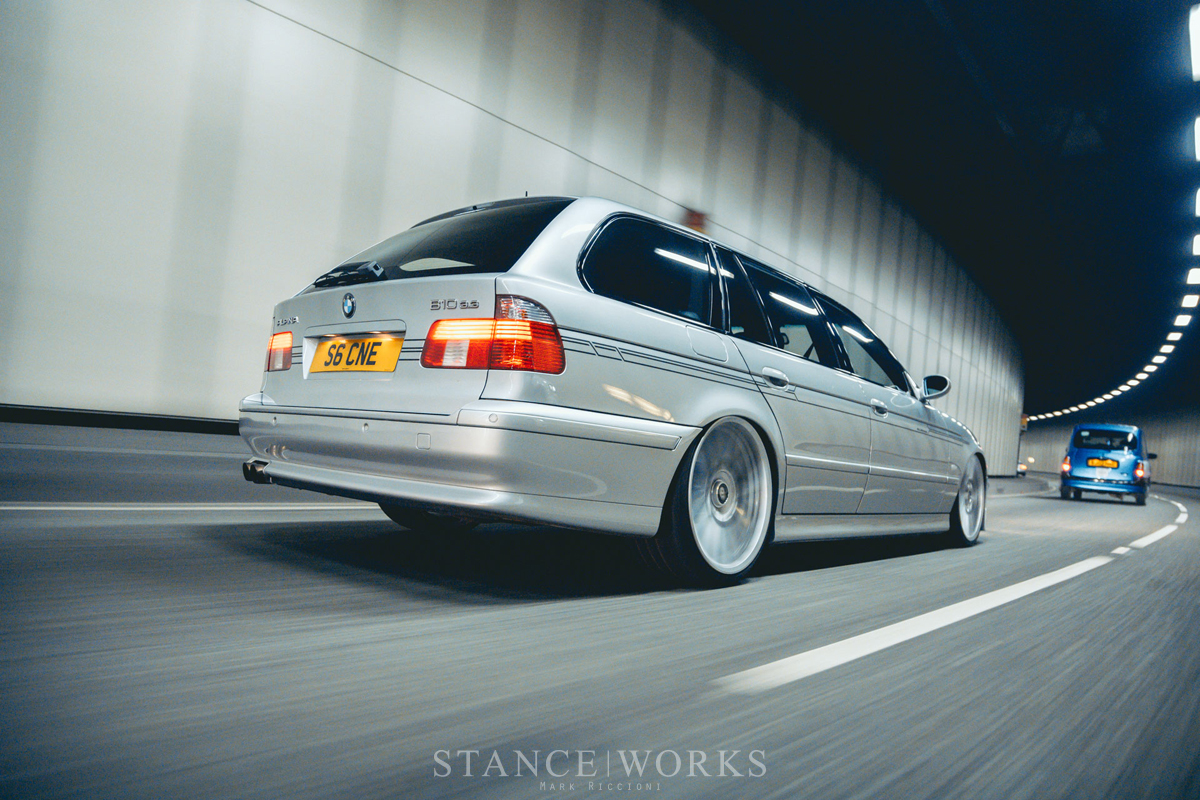 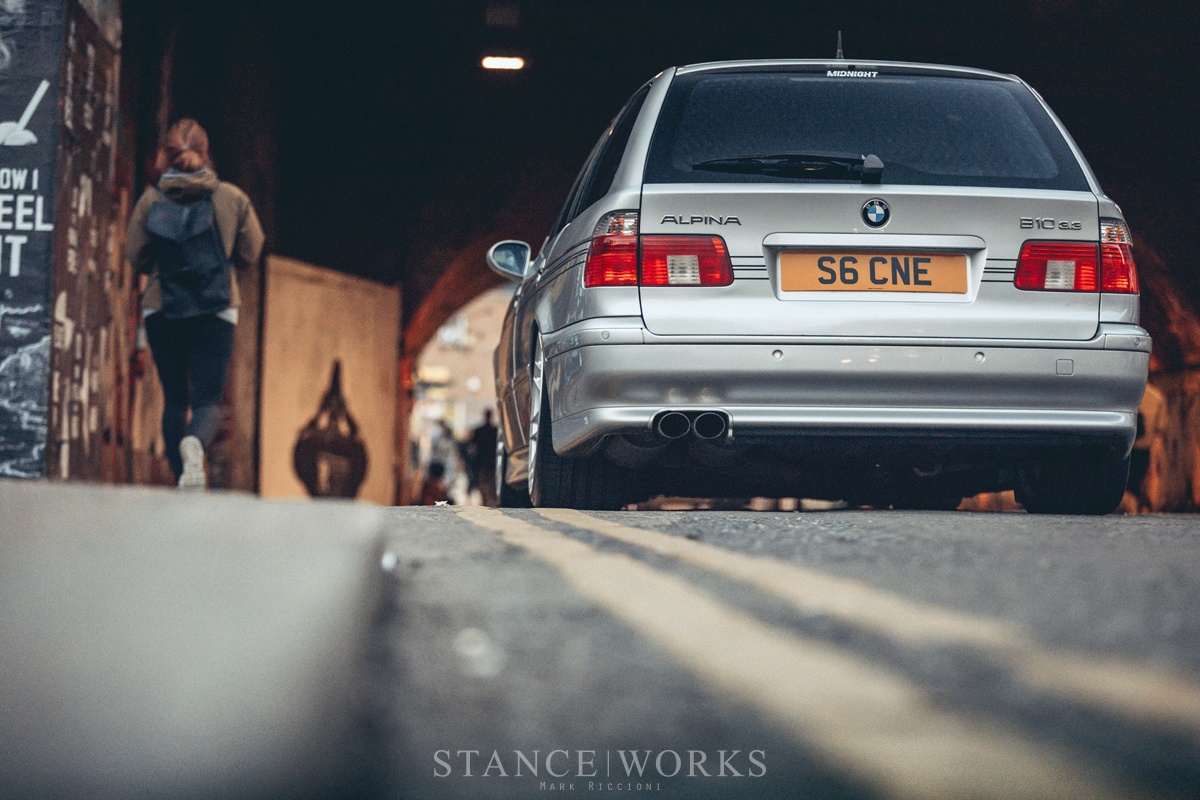 Initially, he considered an E61 M5, as it ticked every box on the list of requisites; however, fellow car nut and close friend Mark already owned one, and to put it simply, Ryan states "we couldn’t really have the same car." Of the 40 or so cars Ryan has owned, only two prior to the Alpina have been BMWs, one of which was an E39 M5. Considering himself familiar with the chassis, he opened up the idea of looking into E39 tourings, despite the unavailability of an M5 variant. The thought of supercharging a 540i touring was considered, but the basics of the car left a lot to be desired. It left only one real option. 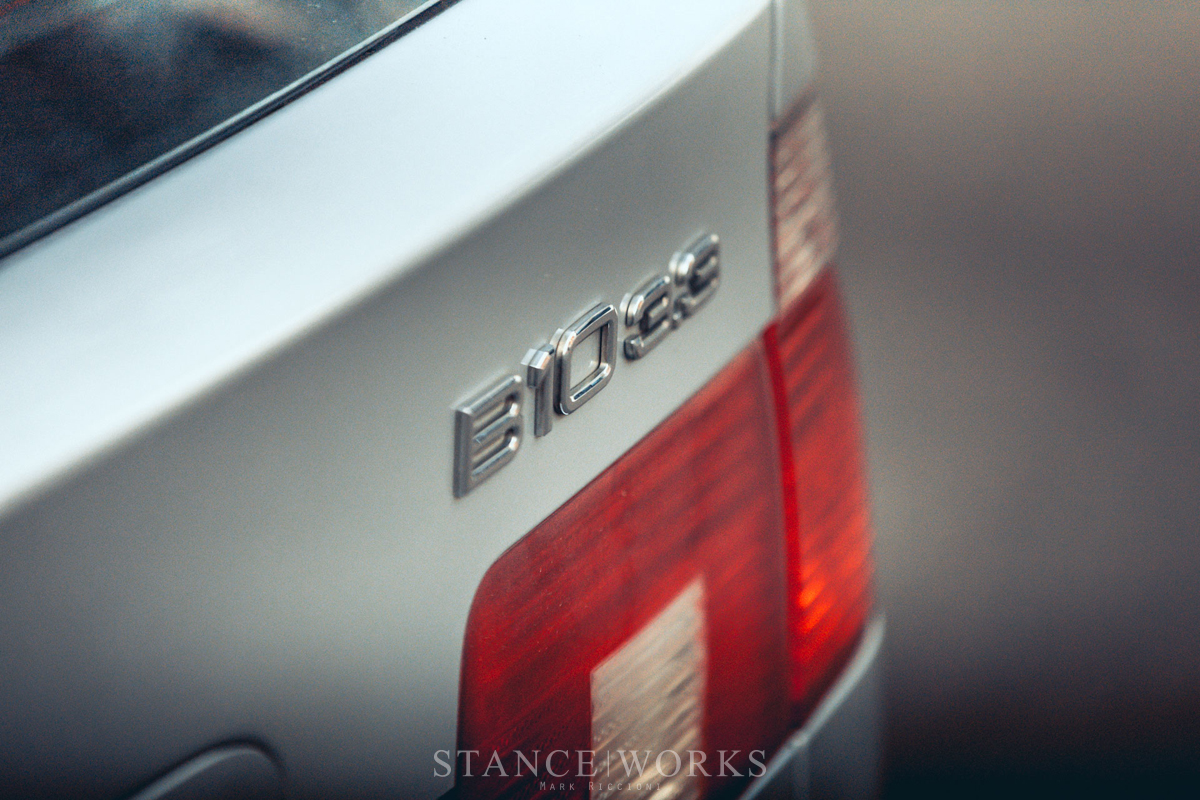 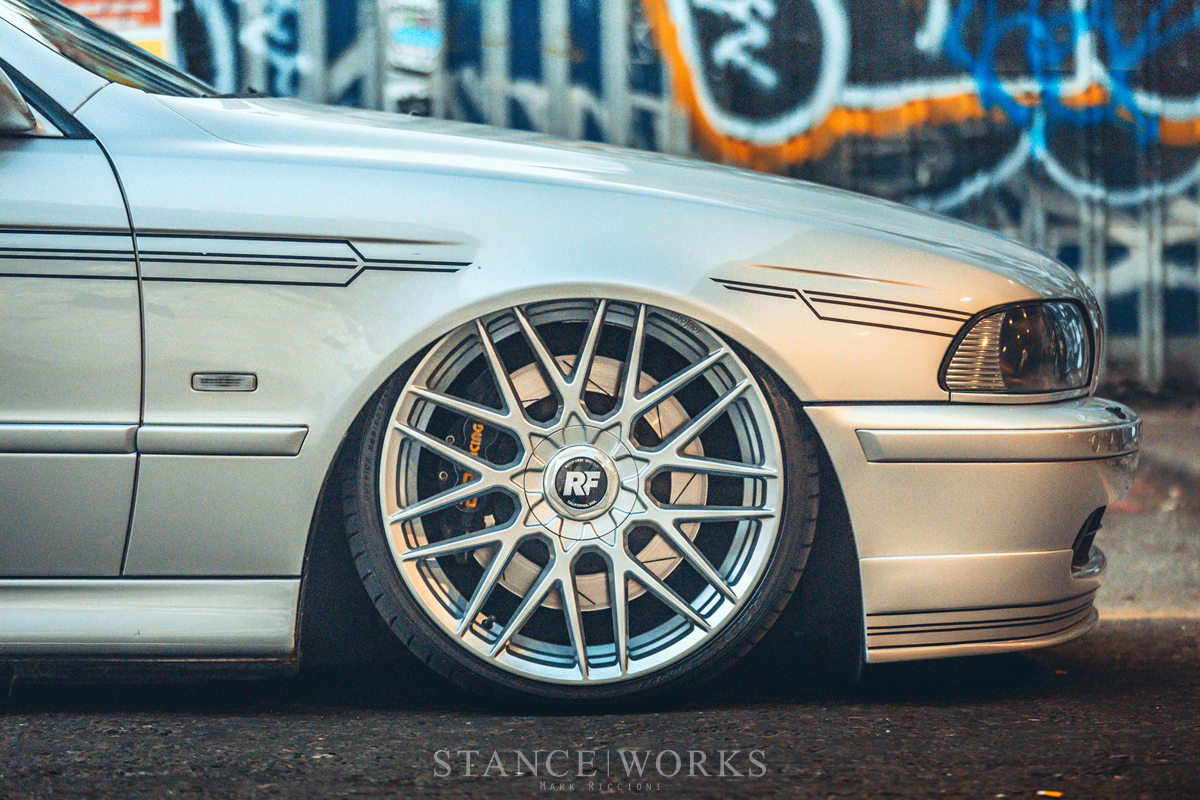 "I never really got over the feeling of being lied to by BMW when purchasing a Carbon Black M5 in the dark, only later to discover Carbon Black is really blue. Alpinas are however something I am really, really into. The way Alpina approach customizing these cars really speaks the engineer in me," says Ryan.  The choice for a B10 Touring was a bit of an obvious one for him, with the upped power, interior quality, and touches that separate it from the rest of the field. 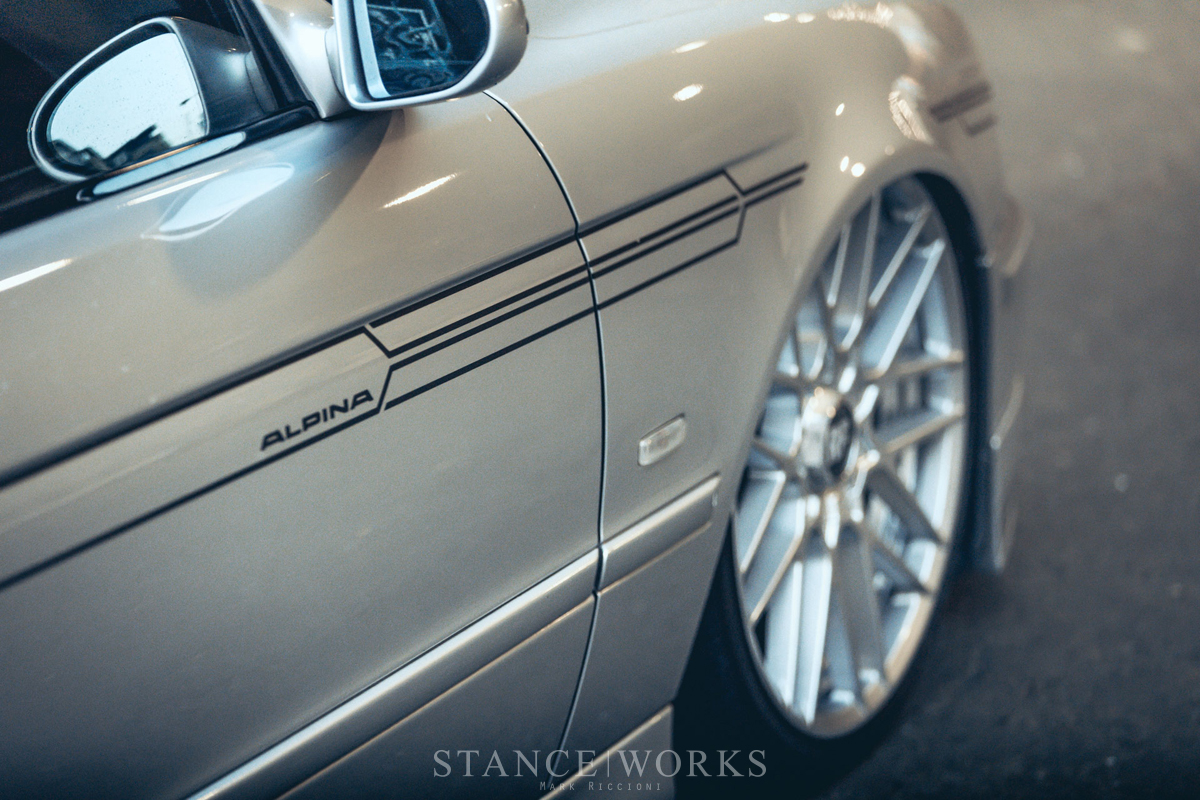 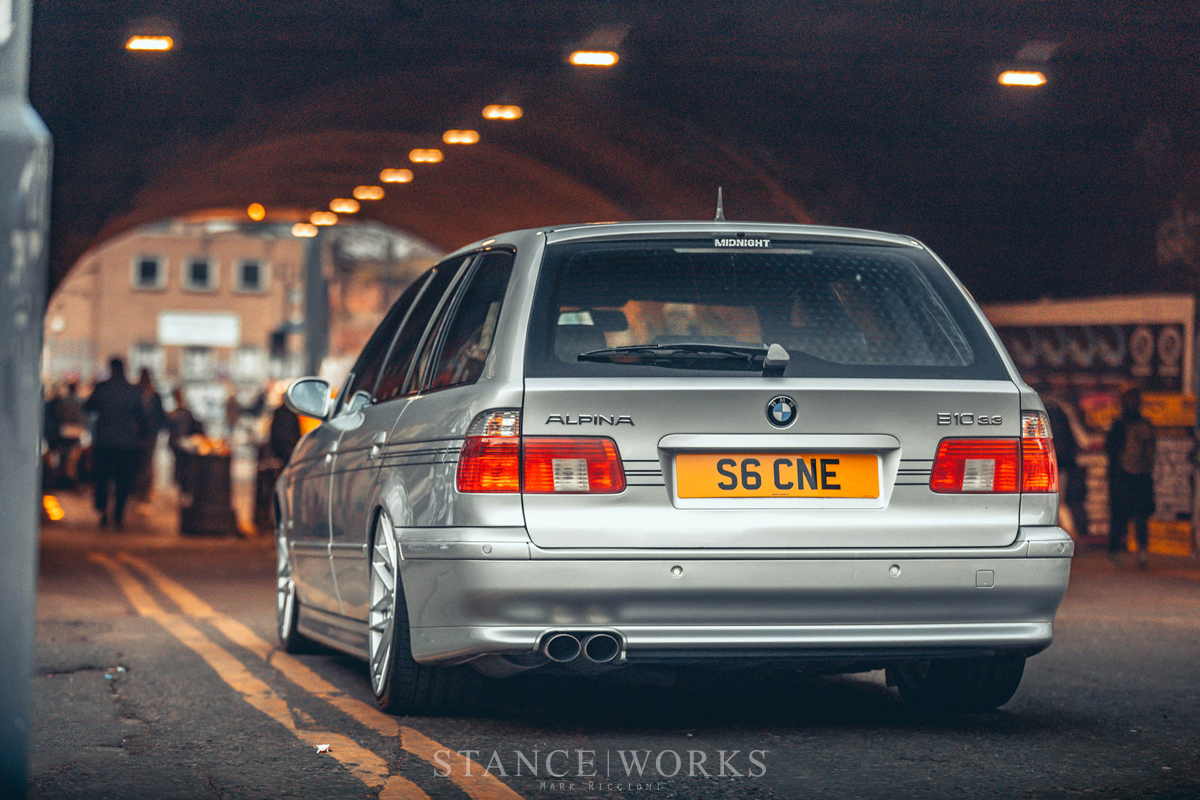 The B10 Touring came in two variants: the V8, and the 3.3-liter inline six. While the switchtronic automatic gearbox was available in both platforms, the V8 commanded a significant price premium, leaving Ryan to settle for the little brother. However, the 3.3 utilizes a U.S.-market 3.2 iron block, boredout to 3.3 with forged rods and pistons, along with a single-vanos big-valve head with bespoke cams and a unique intake manifold and throttle body setup. The yielded result is a solid 40 horsepower bump over the standard 530i counterpart. 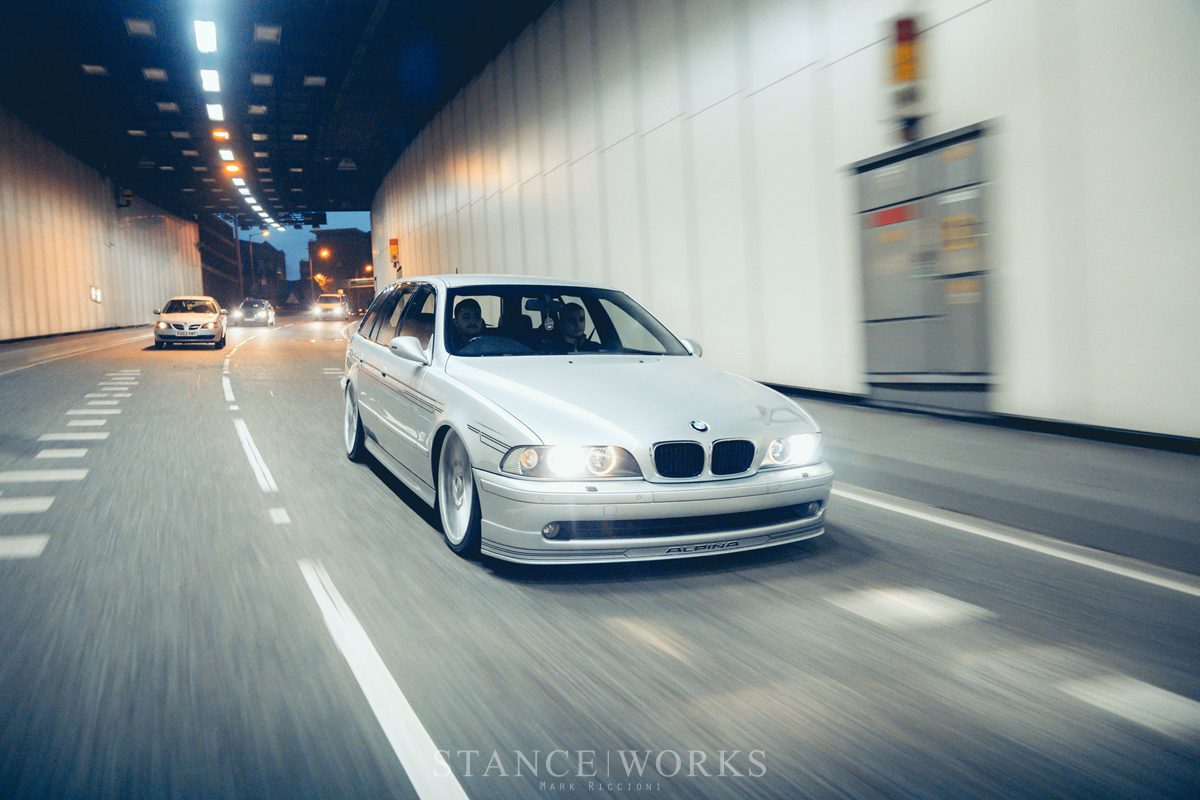 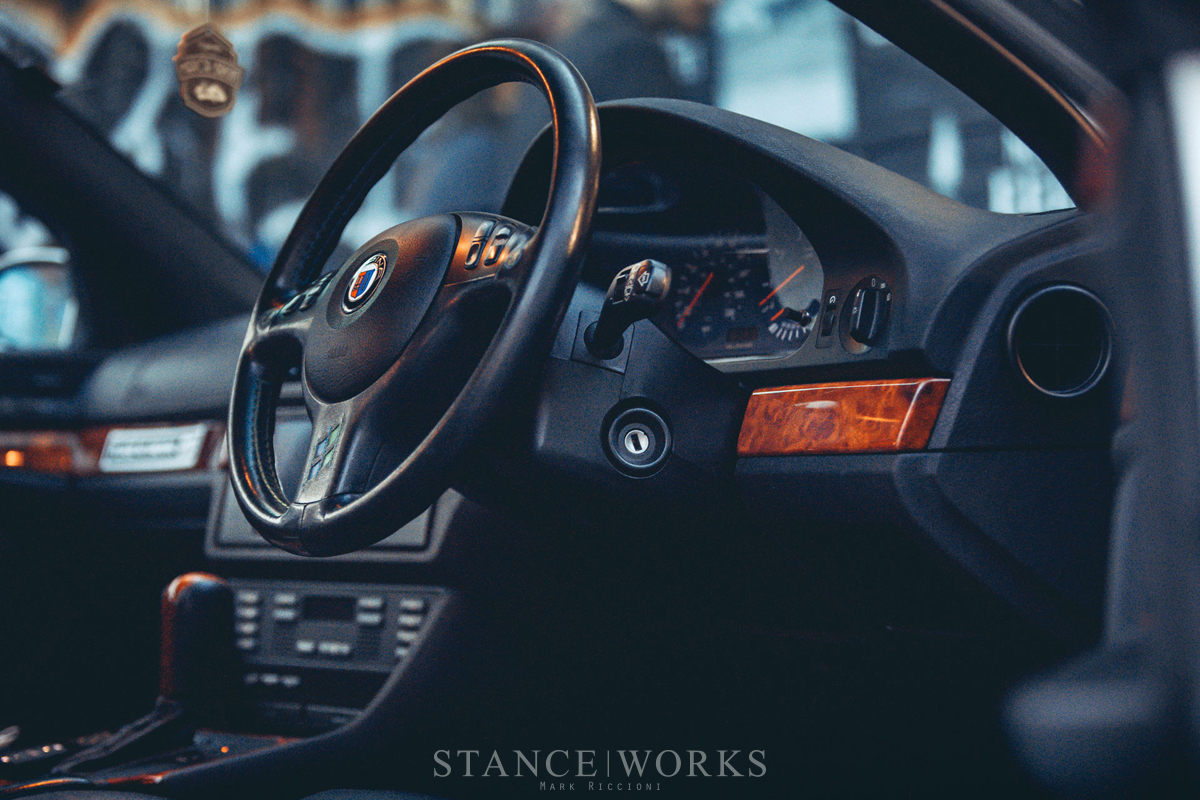 Finding the car was a challenge of its own. Wanting a 3.3-liter switchtronic touring, he had 3 cars ever made to choose from. Luckily, he found two of the three for sale. While one was rather clapped out, the other was flawless, and after a bit of back and forth with the owner, it was Ryan's to take home, where he made quick work of making it his own. 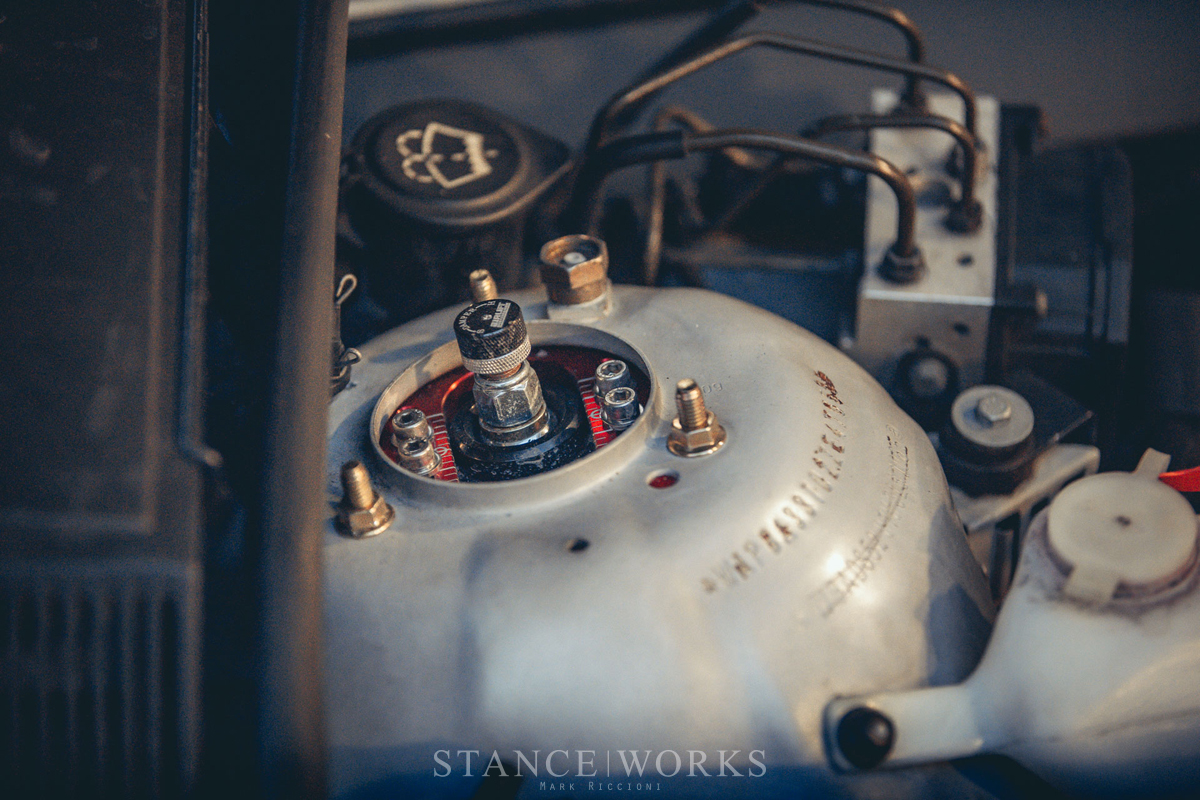 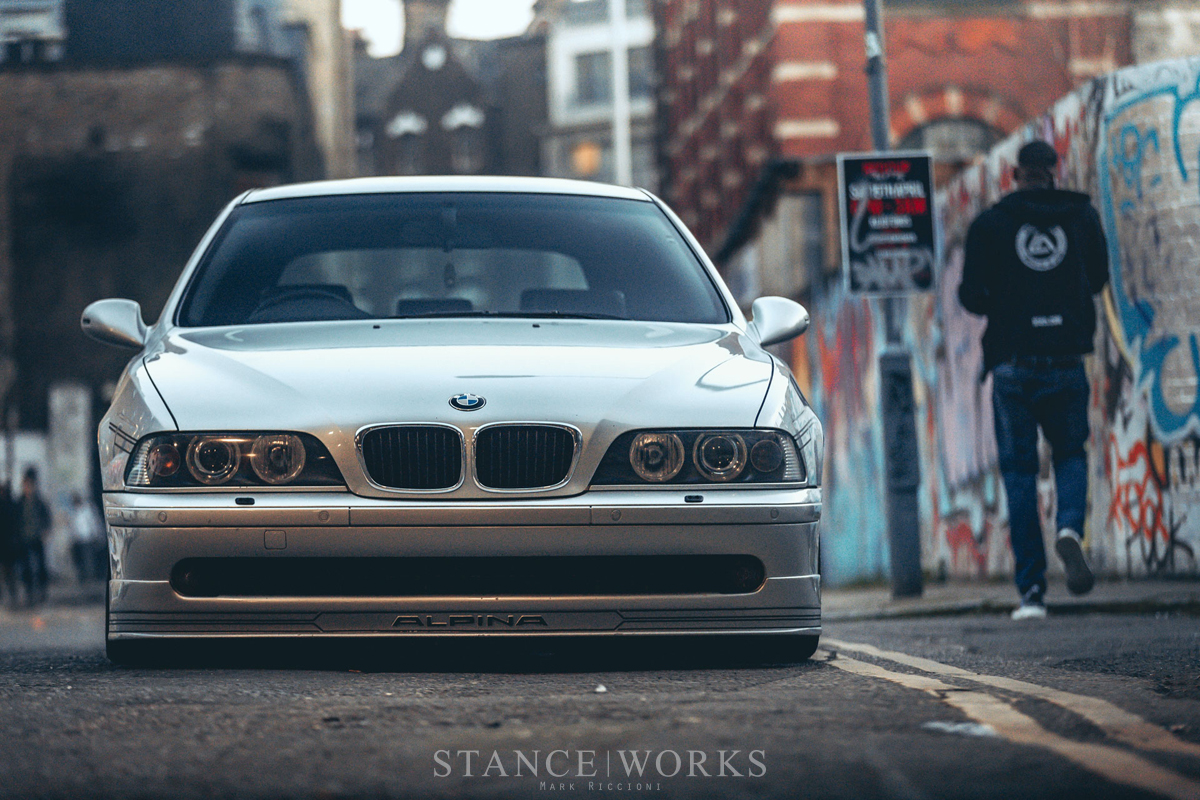 The most considerable change to the car is, of course, the suspension. Tossing the renowned Alpina-tuned suspension for Air Lift Performance components left him wondering if he'd wind up hampering one of the car's defining characteristics, but that was far from the end result. Up front, Air Lift Performance threaded body front struts are installed, while the factory rear, paired with upgraded Bilstein B14 shocks, have been adapted to mate to the Air Lift Performance 3H management system. Adapting the factory 4mm air lines to the Air Lift imperial fittings proved a bit tough in the UK, but Ryan and his friends at Car Audio Security sorted it out, clearing what he considers to be the only hurdle of the install. 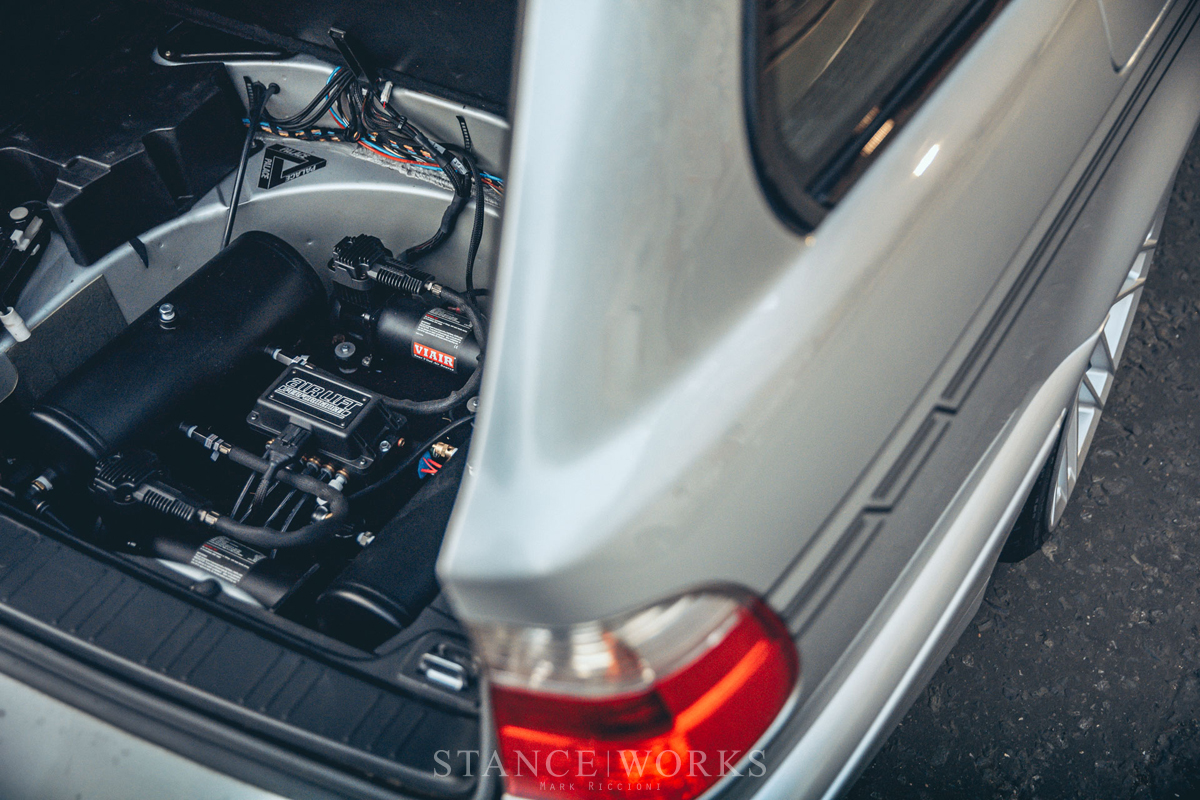 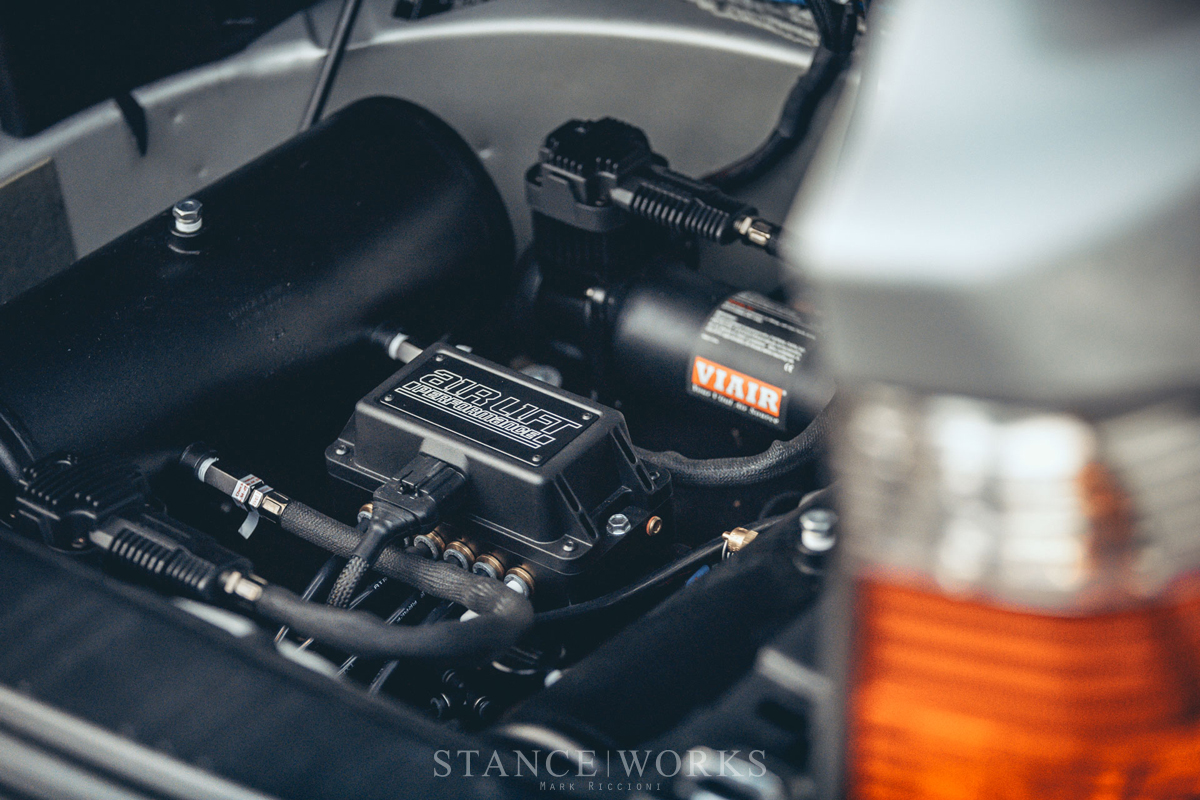 The management itself, including a pair of Viair 444C compressors, two two-gallon tanks, and the 3H system, is all stored beneath the factory false floor, making for a sleek and hidden system. Retaining usability of the car's cargo space was of utmost importance, and the end result is likely how Alpina themselves might tackle the problem, if they felt the need to set their estate car flat on the ground. The 3H control pad sits with easy access for Ryan as he drives, of course. Inside the car, the details have been left alone, with Alpina's signature blue and green touches echoing throughout the interior. The wood trim - almost orange in appearance, glows throughout the interior, as it has on so many Alpina cars before and since. 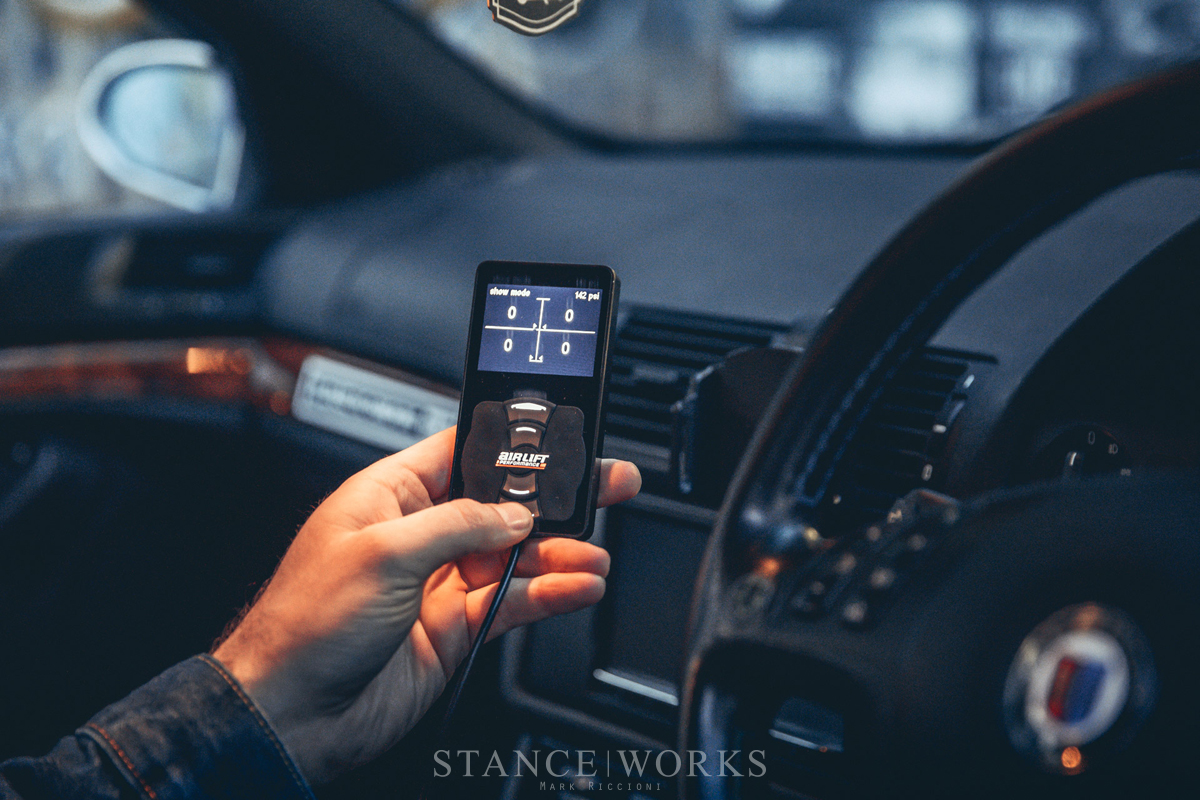 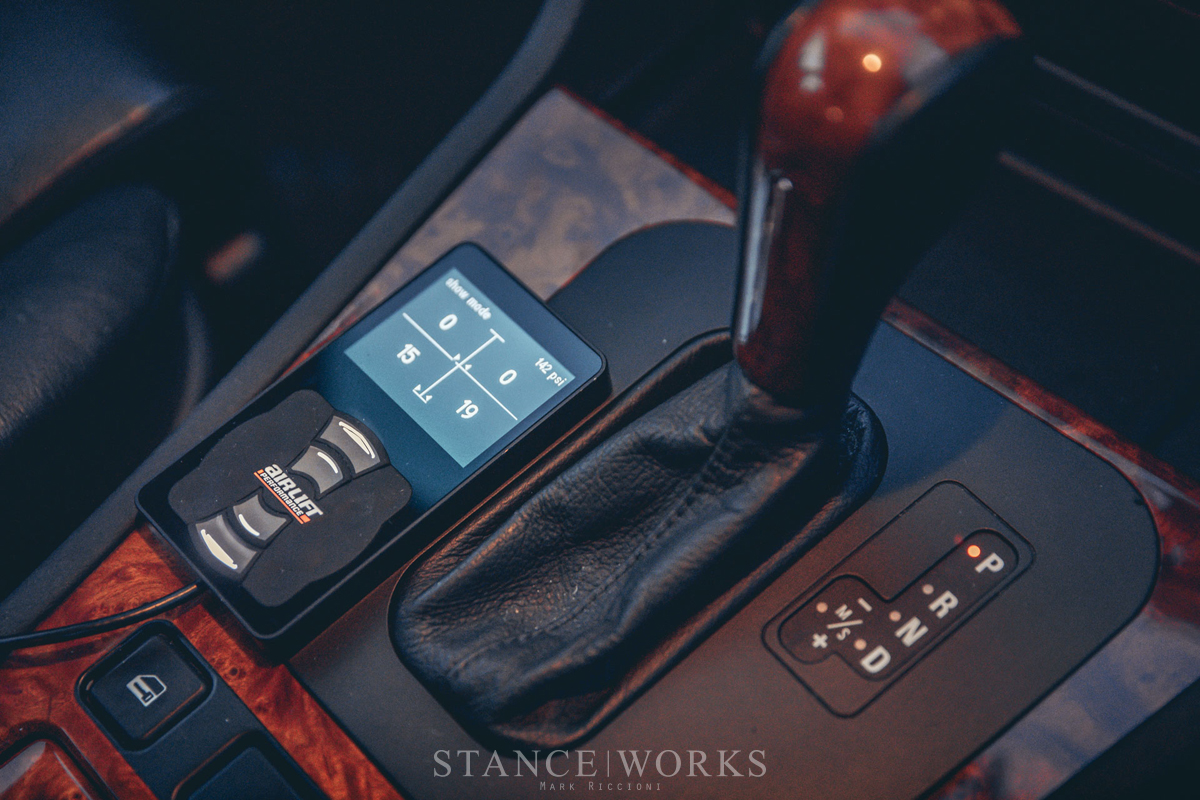 For wheels, Ryan opted for the new Rotiform RSE, cast in 20x8.5 for the front and 20x10 for the rear - considerably larger than the initial offering by Alpina. The wheels gracefully tuck up into the car's arches, leaving wiggle room as not to destroy the car's body work in case the worst happens. Behind the wheels, an AP Racing 6-pot 356mm big brake kit lurks, helping to bring the wagon and its heavy cargo to a stop in a hustle. 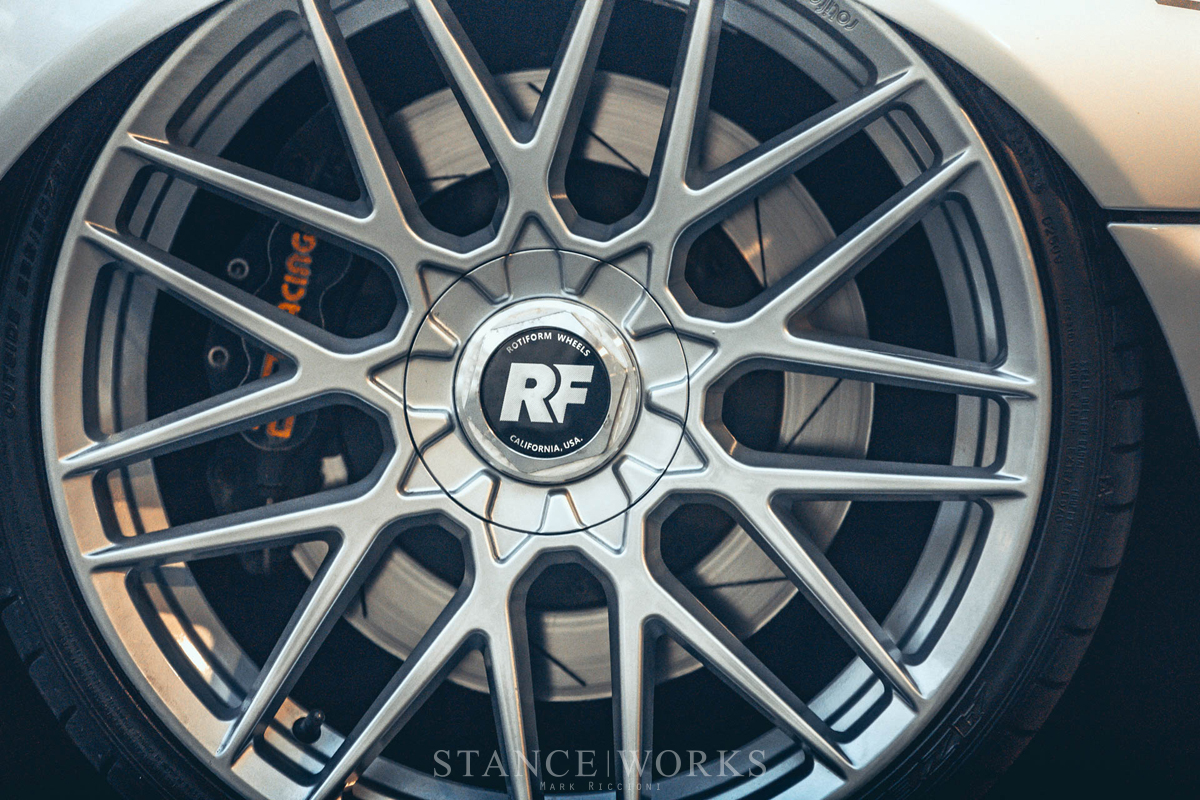 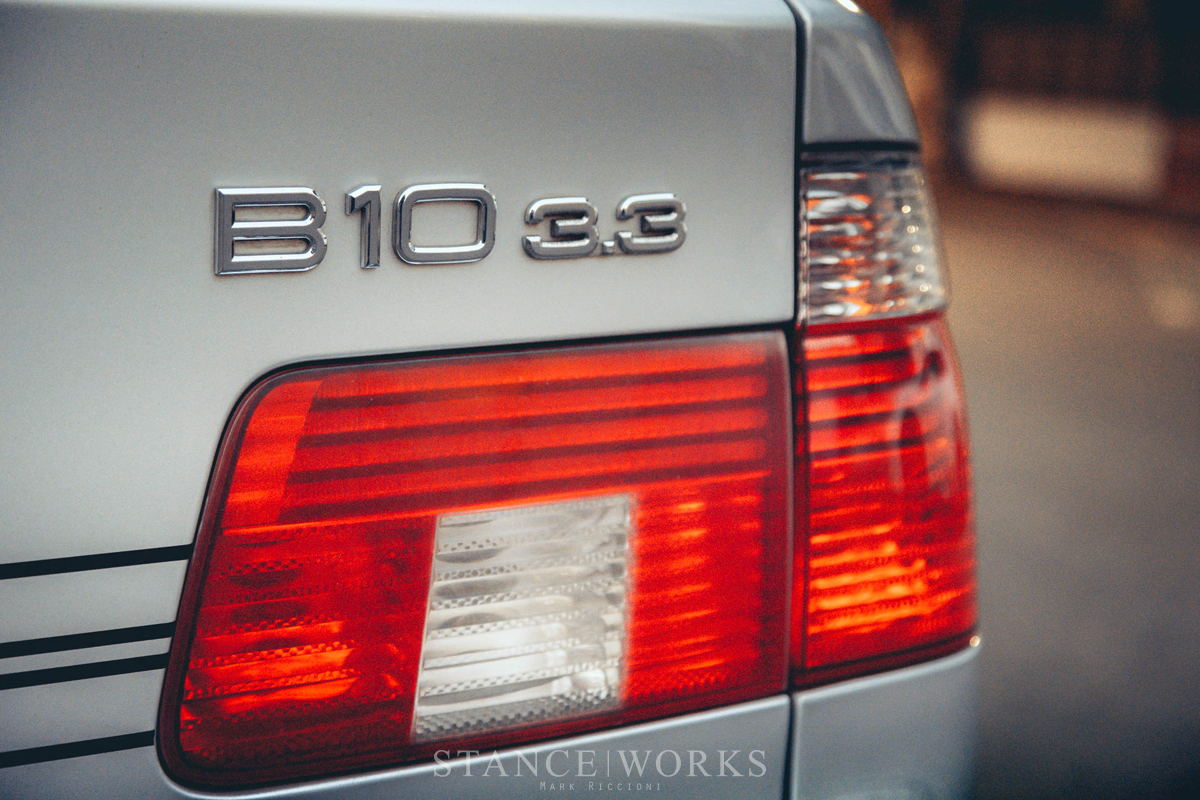 The result of Ryan's changes to an already enhanced BMW lead to something pretty unique. Some are bound to condemn it, while others will surely laud it. For Ryan, it's the ultimate daily driver, combining beautiful aesthetics, usable power, and of course, an incredible ride, all in his own way. 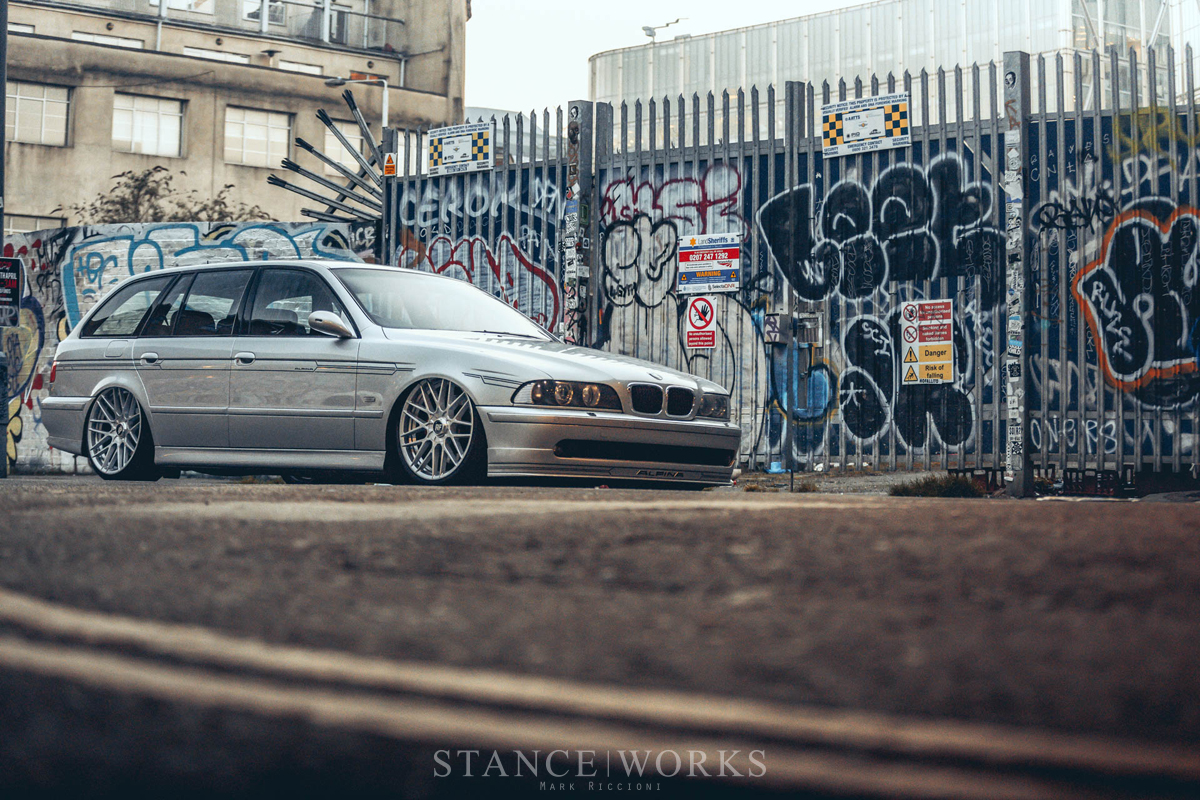