In The Lobby – The Dinan Turbo 540i World Challenge Sedan

In The Lobby – The Dinan Turbo 540i World Challenge Sedan

It's been a habit of mine, among many others, to get lost on the pages of Google, Wikipedia, and RacingSportsCars.com, enjoying the hidden gems of racing history scattered across the web. The first time I came across Dinan's 540i, I was immediately captivated - something about its stature left a lasting image in my mind. With relatively few 5-series cars ever used for racing, Steve Dinan's E34 is a rare taste of something special and unfortunately lacking: massively powerful, oversized, no-holds-barred racing sedans. 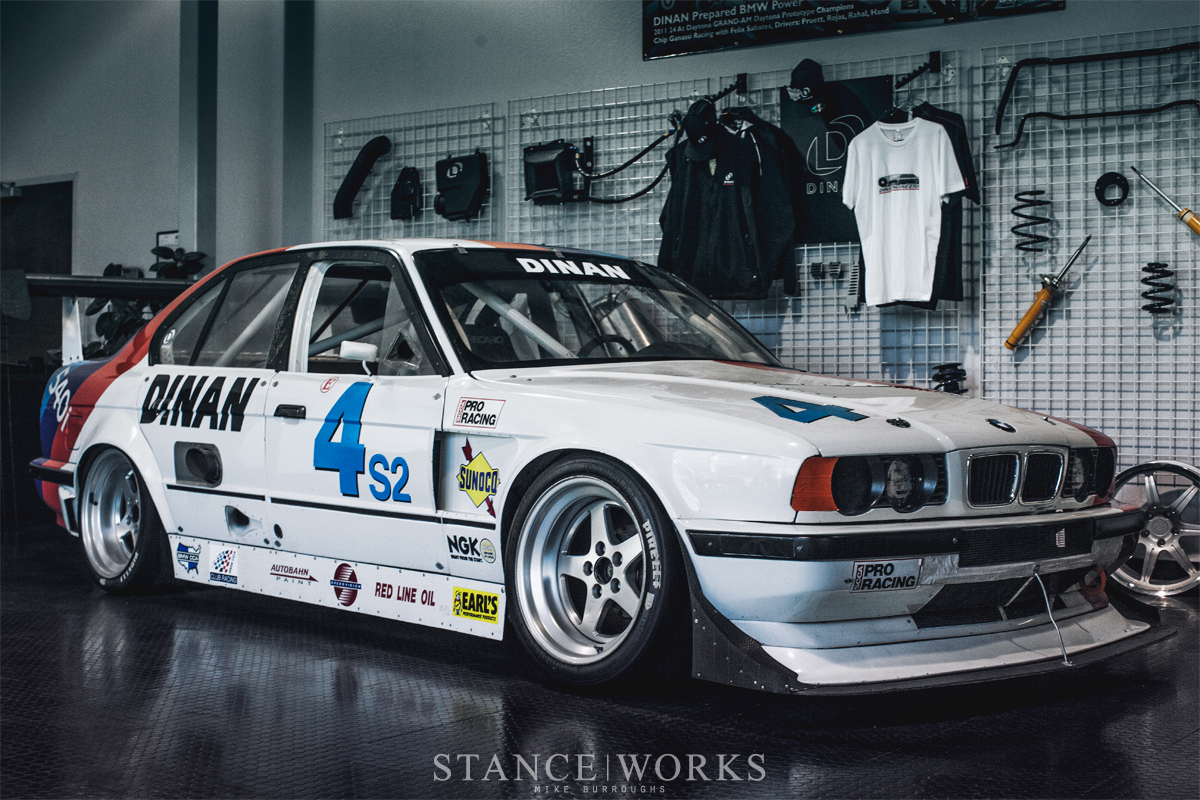 The highlight of our trip to the Dinan facility in Morgan Hill last year was, humorously enough, the first thing we encountered. Upon entering the lobby, I was met with the very car I had grown enamored with years prior. Alongside David Donohue's Ed Arnold Racing Factory E34, Dinan's car is of a rare kind - race bred E34 5ers. While it's hard to turn away from the brilliance and factory backing that lead to Donohue's champion car (which we will visit in another article), there's something special about the homebrew, privateer style of Dinan's all-out monster. Perched in the foyer of the headquarters, it sat begging for time with me and my camera. After our tour of their world-class facility, I couldn't help but return to the "ancient" technology that sat in the front office. 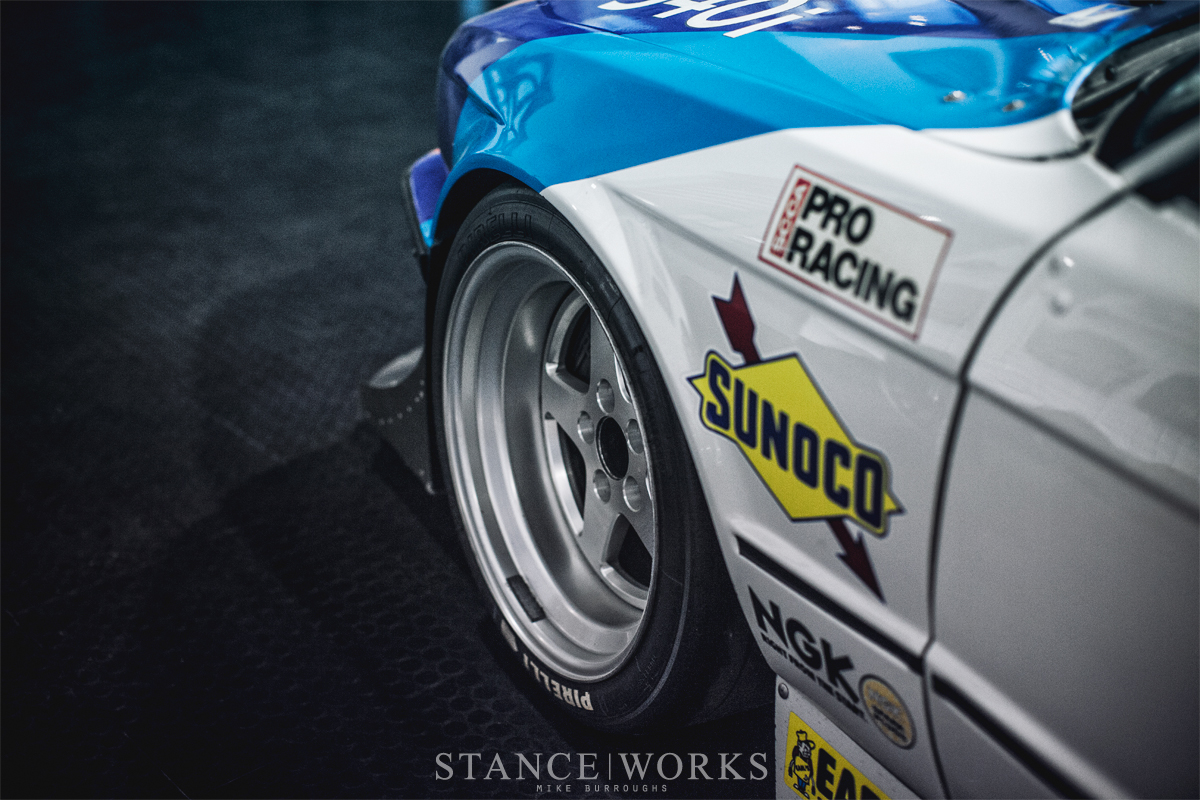 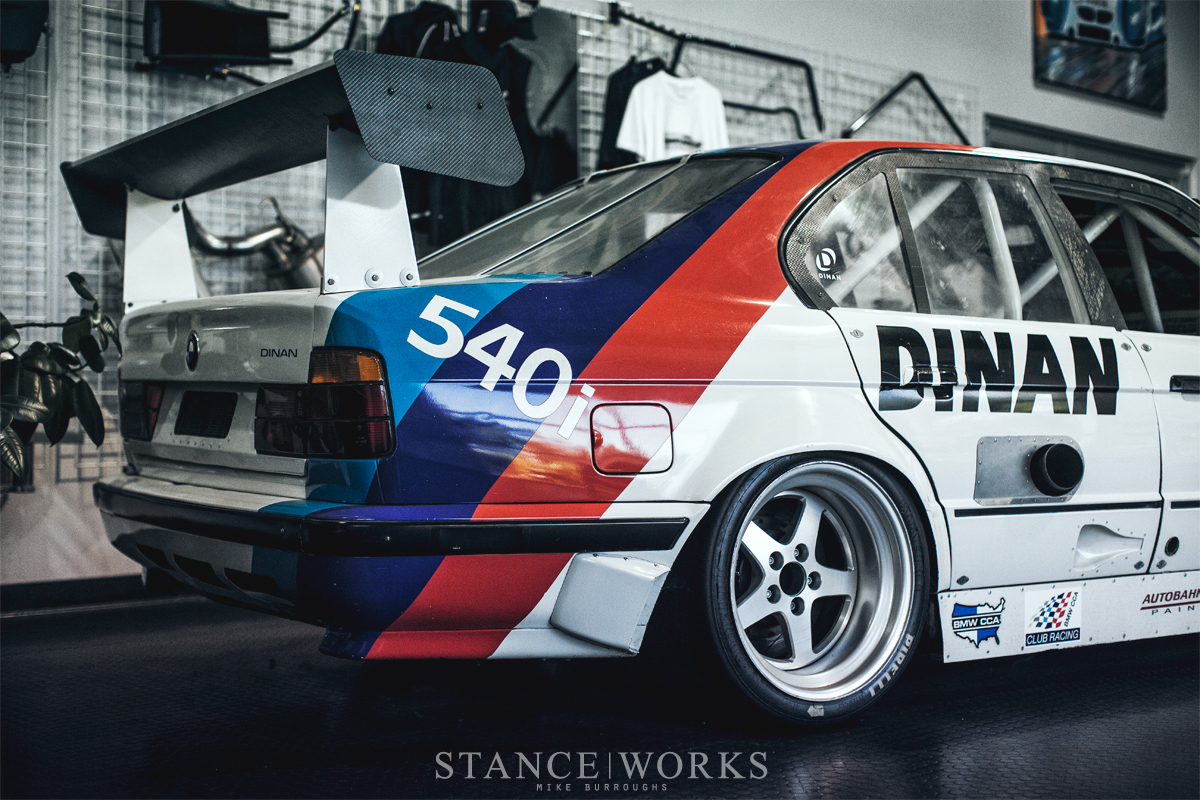 Built as a privateer car for the World Challenge series in the mid-nineties, Dinan's 540i is as raw as they come. At first glance, the car may appear to be somewhat close to stock - excusing the livery, chin spoiler, and massive rear wing, one might suggest that much of the E34 has been left "in tact;" however, even that is a stretch. Working from the outside in, the car's factory metalwork has been replaced with carbon fiber for almost every panel. The front arches sit staunch and outright in comparison to the factory counterparts in order to house the wide Pirelli slicks, and the rear arches dwarf the fronts, tucking the tire completely behind the carbon bodywork. 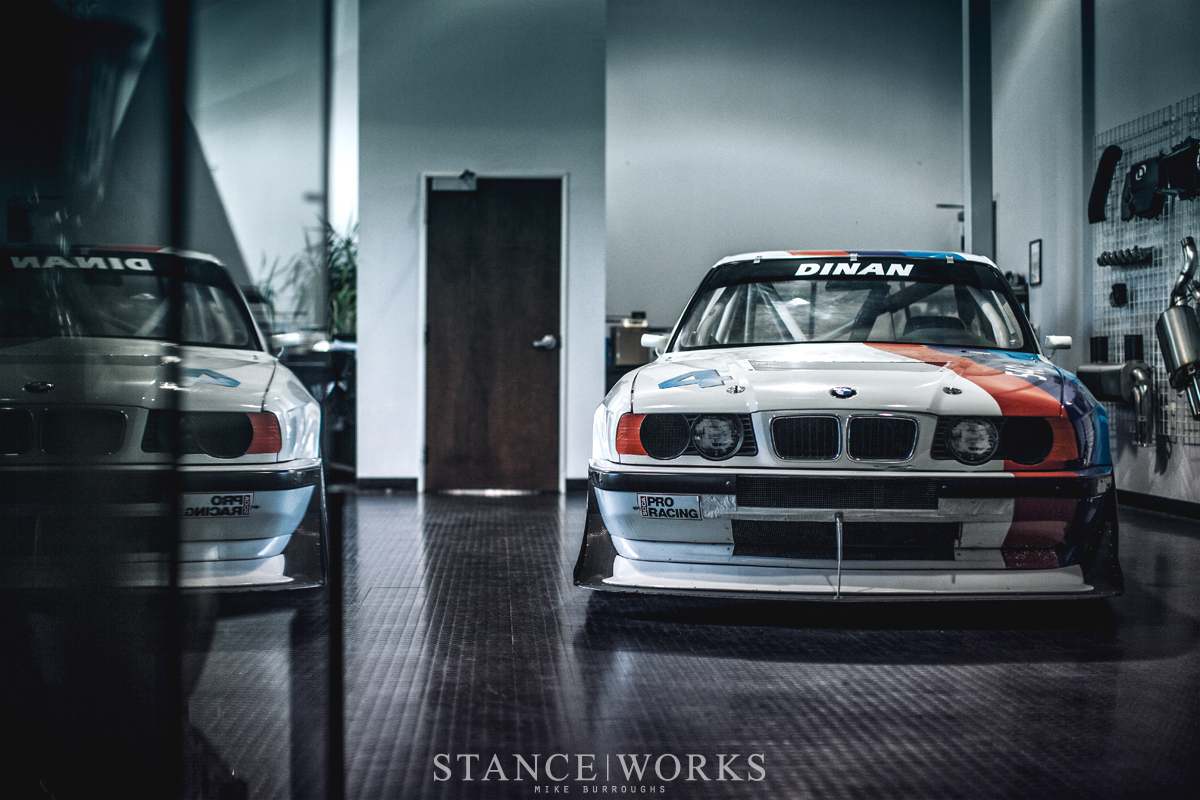 The front bumper stretches to meet the arches, and is traced by a gargantuan carbon splitter. Behind the front wheels, the doors are little more than remnants of their former selves - steel skins remain while the insides have been gutted, each held on by a quarter-turn fastener in each corner. Underneath, a custom skirt has been riveted to each side. The tail of the car has received a similar treatment: vents hug the bottom of the bumper, and perched atop the deck lid may be the largest spoiler an E34 has ever seen. Between the tail lights, metal has been removed, and in its place, a mesh screen shows hints of a massive red ATL fuel cell, which burned through all 35 gallons in the short 40-or-so-minute races. 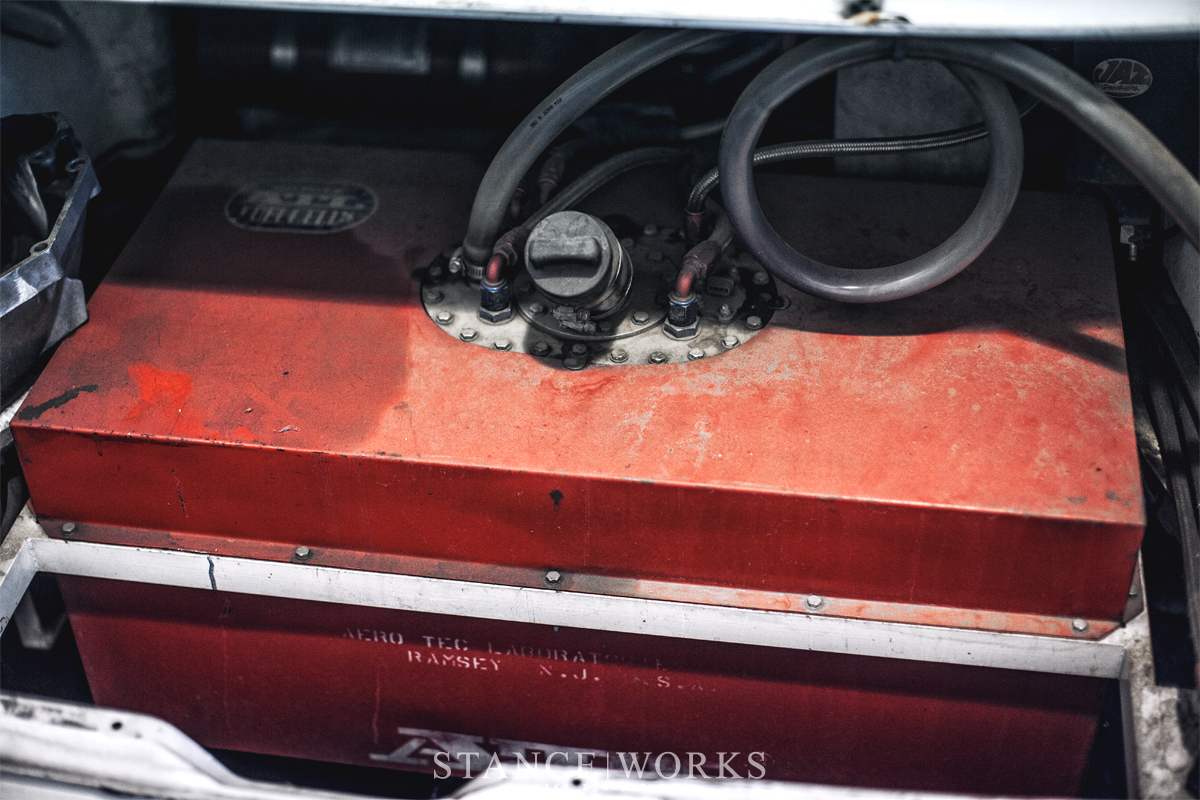 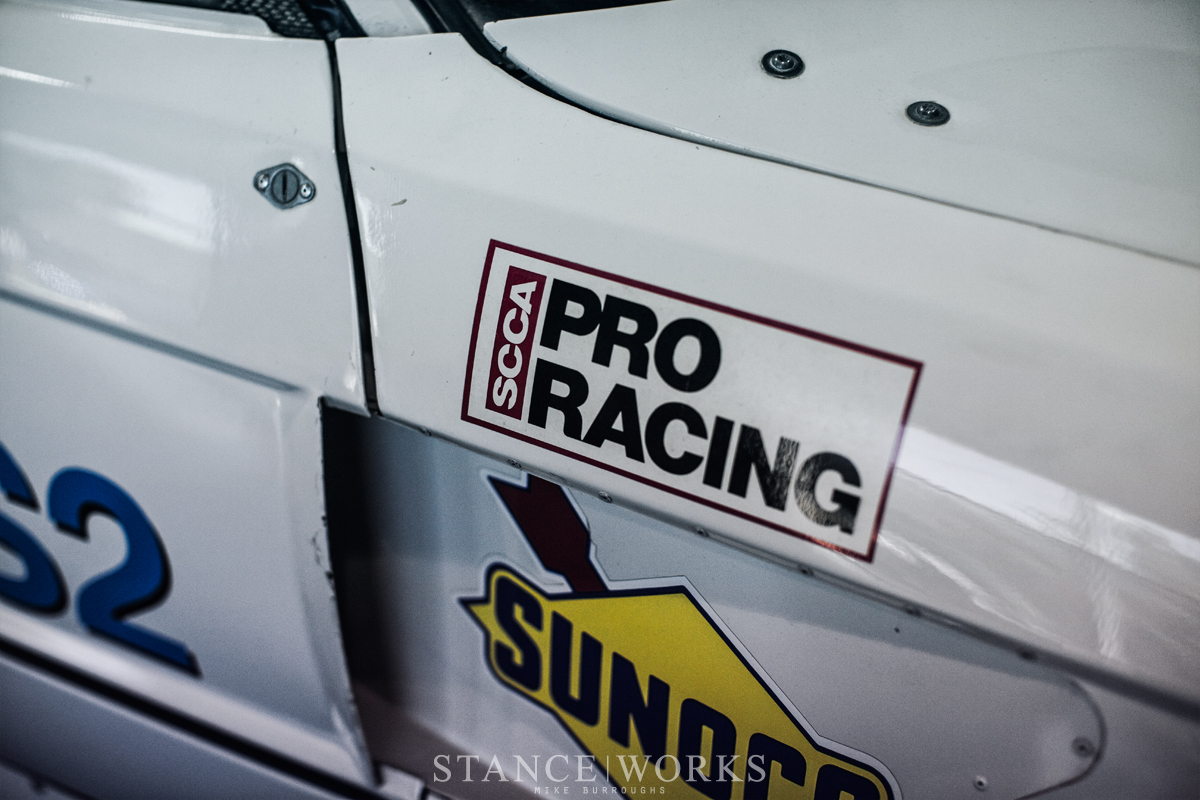 What makes Dinan's E34 truly mouth-watering is the somewhat unorthodox powerplant. Instead of an inline-six, as one might expect in a BMW race car, Dinan found solace in the bulletproof, albeit notoriously leaky M60 4.0-liter V8. The 540i badging gives that part away, but only the observant may notice the details of which the passenger side of the car gives way to. The front fender retracts, venting into the door, and behind it, dead-center of the rear door, is the car's obnoxiously large exhaust pipe. Throwing BMW's ideas of "passenger space" out the window, Steve Dinan fitted a massive Garrett T04 turbocharger smack-dab in the middle of the passenger compartment. A cage of tubing restrains the beast, which belches fire and spins tires on demand. 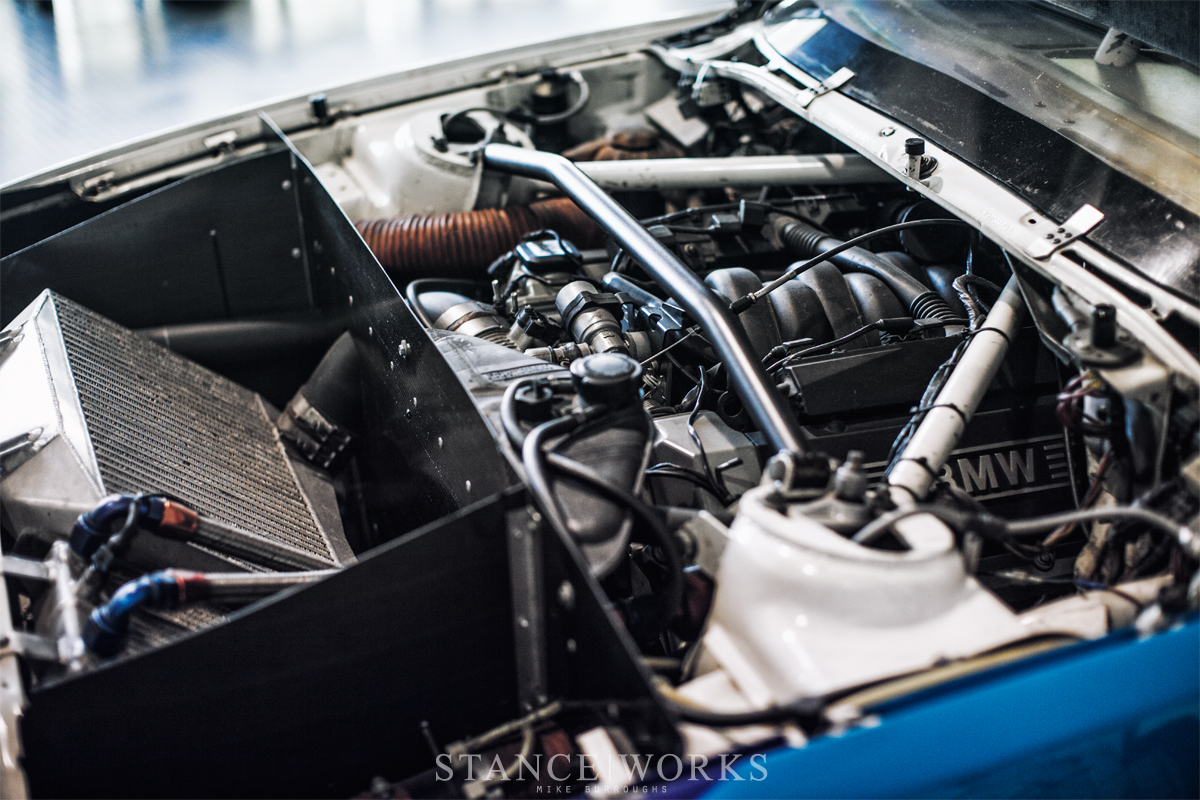 The engine itself is close to stock, as Dinan himself tells me. As one part failed, it was replaced, until the weakest link was up to par... and parts failed often in the early stages. The M60 was fed more than 20 pounds of boost, and while the memories are fuzzy, some have said the boost gauge peaked at an astounding 40psi. The power, Dinan says, was immense - more than 850 ponies scrambling for traction on even the smoothest of pavement. Dinan admits the car was a hand full, and that when the accelerator pedal was mashed, the car had best be pointed in the intended direction of trajectory. There's something to be loved about an over-powered under-engineered four-door rocket ship, and Dinan built one of the best I can imagine. 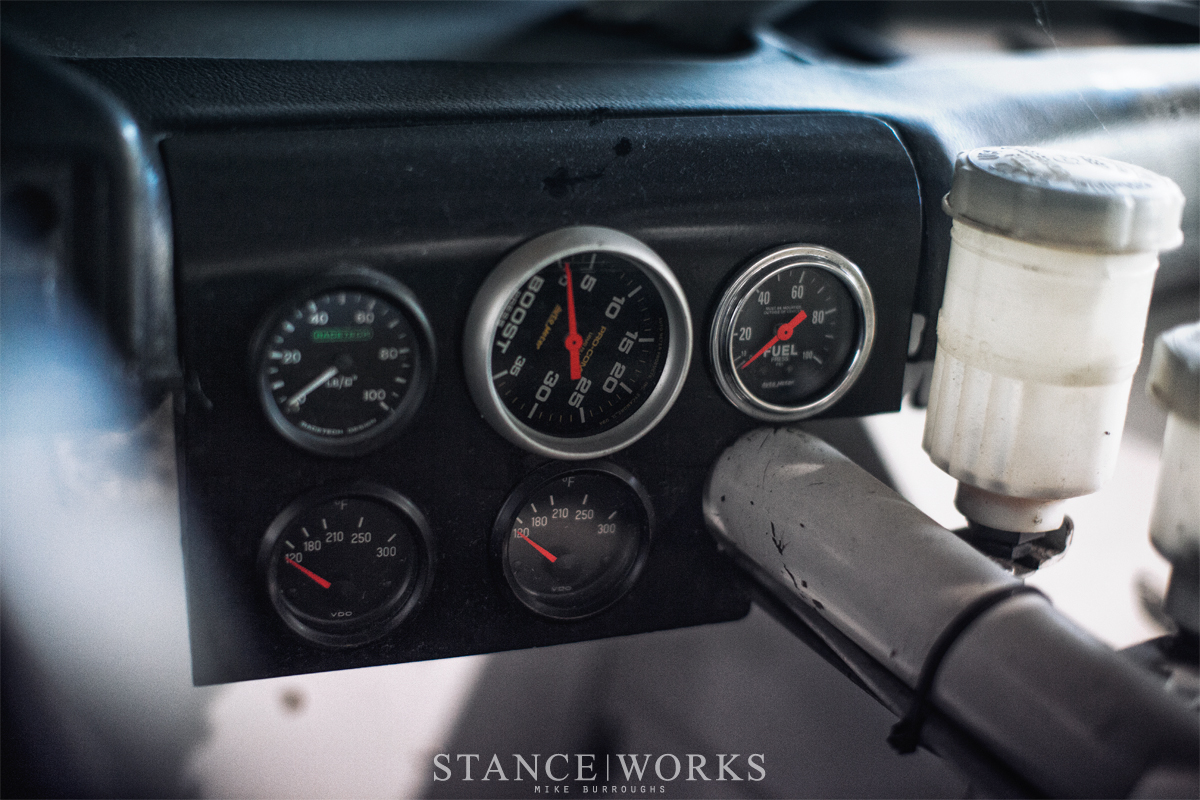 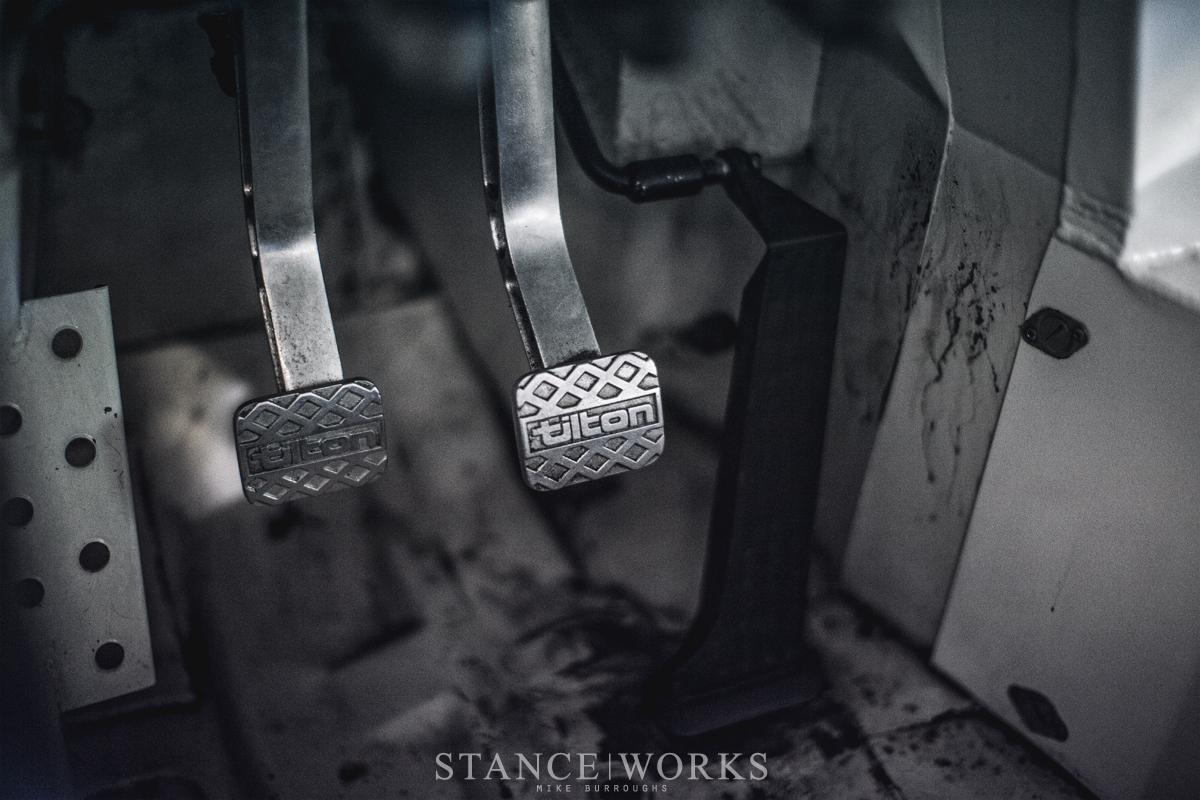 The 540i's cage work is stout, with bars limiting passenger space to nil - just Dinan, the track, and nearly 1,000 horsepower at his disposal. Returning under the hood, the engine sits back significantly in comparison to BMW's standard offerings. With just a bit of the engine hanging over the front wheel centerline, the weight distribution of the E34 is evened out. With the engine moved back, the strut towers were moved in to aid with gaining more camber, and lastly, the newfound room was used to mount the behemoth intercooler used to keep the manifold air temps at a minimum. 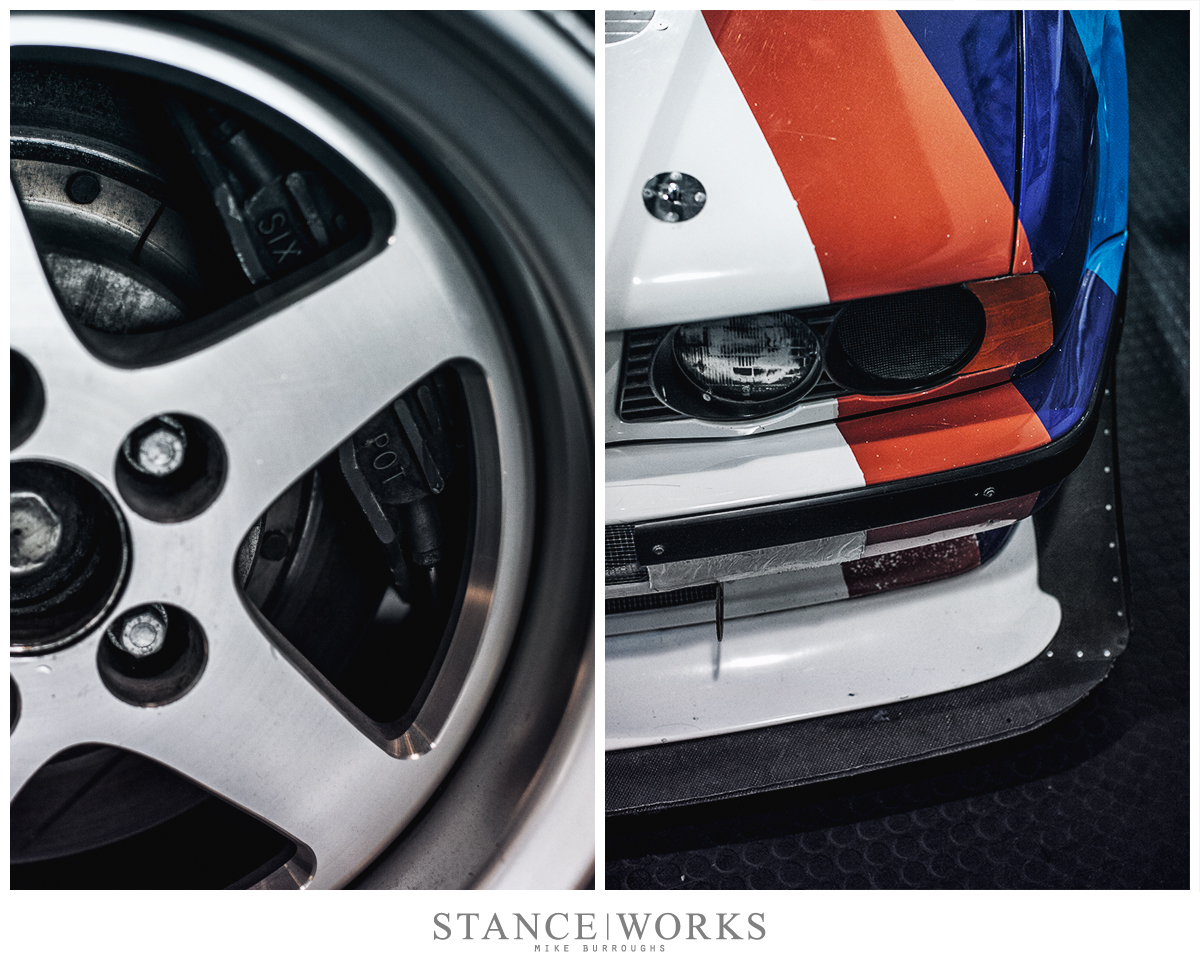 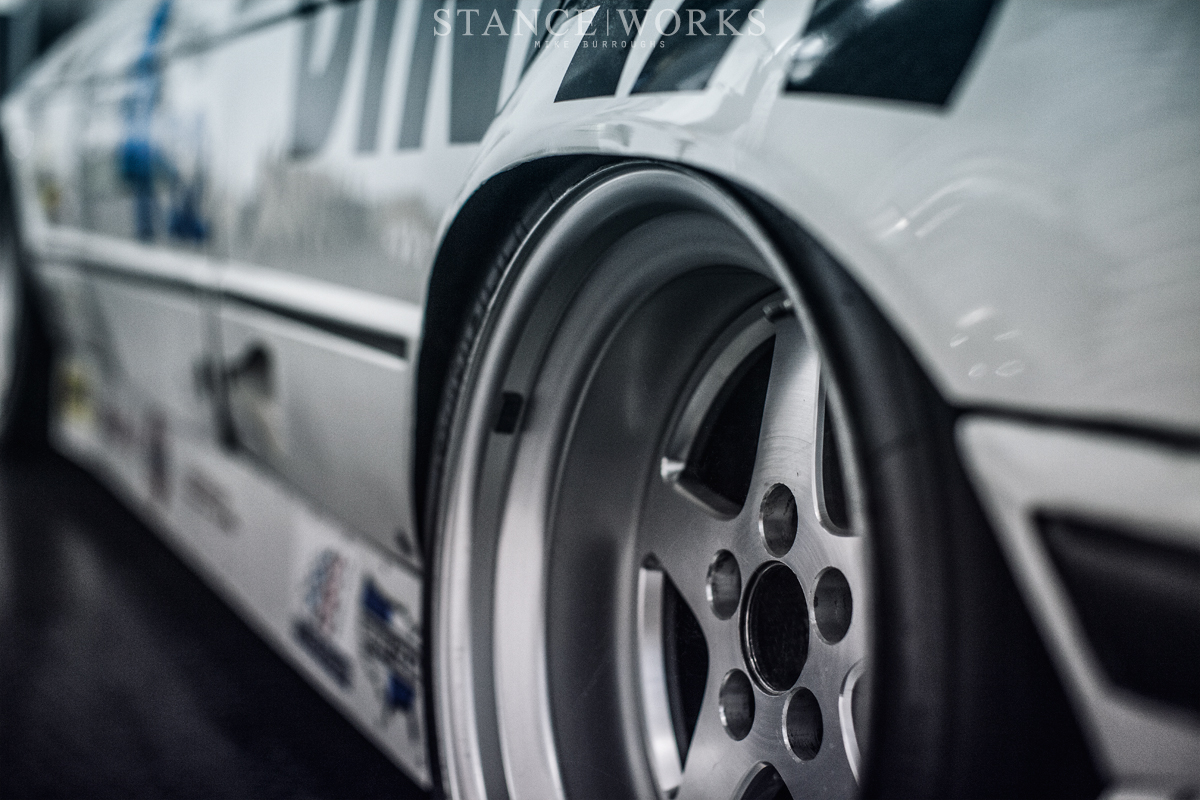 The creativity, ingenuity, and  best of all, the relatability to Dinan's E34 race car, are what make it one of the '90s coolest hidden gems. Dinan had no BMW backing on his quest to win a World Challenge title - and while he never reached his goal, he has quite the piece of memorabilia sitting just a few meters from his desk. Without BMW's chequebook behind him, this E34 was built by the hands and knowledge of a man determined to chase a dream, and while it may not have fulfilled his, it has created a dream for many others, myself included. 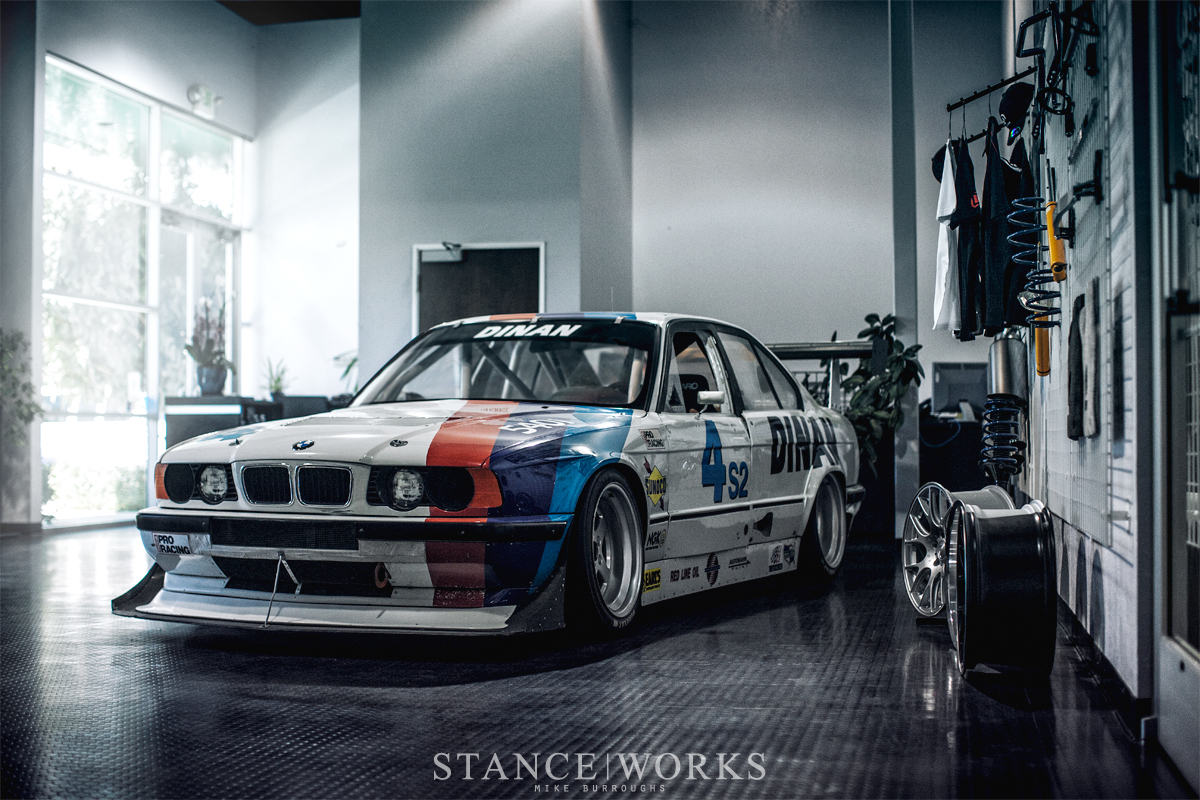