Returning to Tennessee for the holidays has become a staple to the year’s end. Dividing time between family and friends seems to be eternally conflicting: Mom’s home-cooked dinner versus an evening of drinks and pool with college roommates; each day unfolds a bit differently.  However, when Cory Hutchison called and suggested an afternoon rallying about in the backwoods of Fly, Tennessee, Sunday’s plans were clear. With a pair of E30s, Cory, Jack, Emily, and I planned on getting muddy. 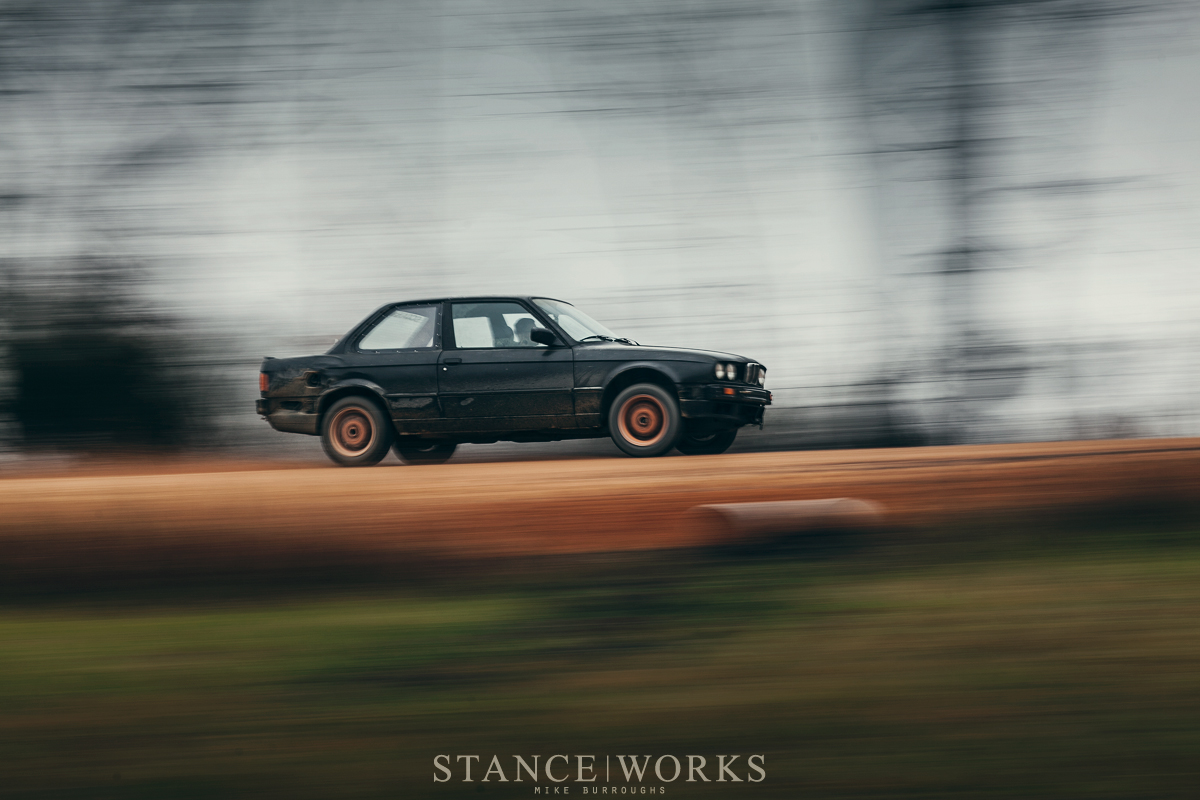 Cory’s last StanceWorks-featured build was his true-to-form E21, clad in classic BMW Motorsport stripes, and built for carving the hills and turns Tennessee is famous for. In the past year, his love for BMW’s 3-series has grown: an E30 now sits beside the E21 in his driveway. His excitement for driving, hooning, and spinning tires has grown as well, and fortunately for his driving record, he’s been diligent to turn his excitement towards the track. 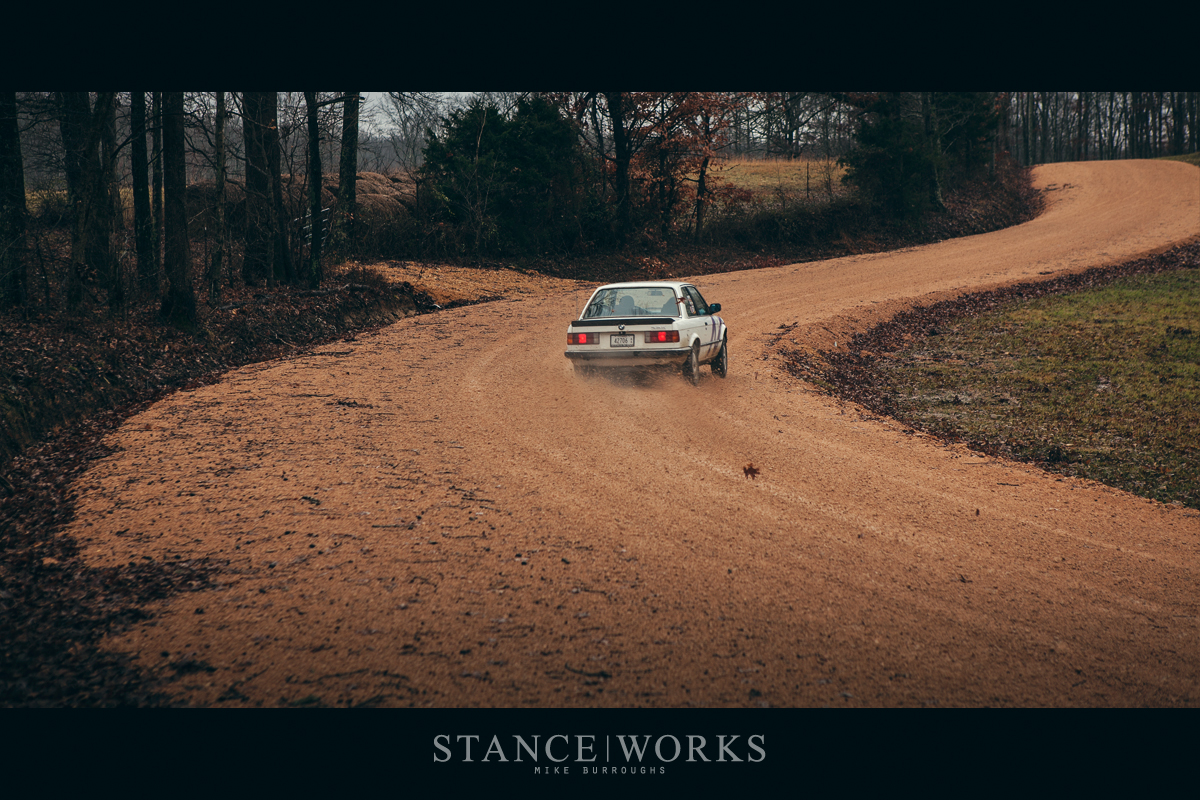 Near the beginning of the year, Cory discovered Rallycross in Hollytree, Alabama; he felt it served as the perfect blend between competitive racing and backyard fun. It didn’t require an expensive, purpose-built car to be competitive. Instead, it was calling for his stock E30. After finding his groove, he’s put 4 class wins under his belt, putting him in contention for a class championship. 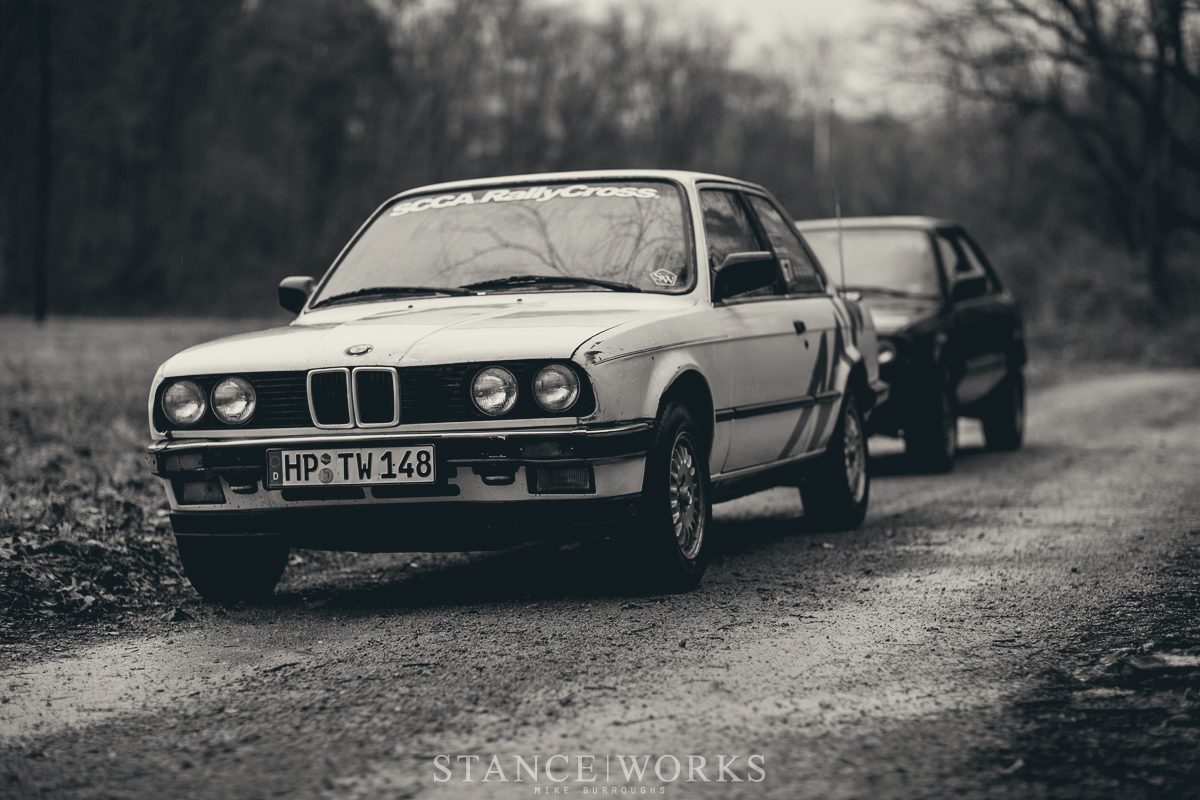 4 class-wins later, Cory and fellow rallycrosser Jack Boone do their practicing on the empty farm roads in what can only qualify as the “Deep South.” Armed with a camera, my girlfriend Emily and I decided to join in on a day of mudding fun. 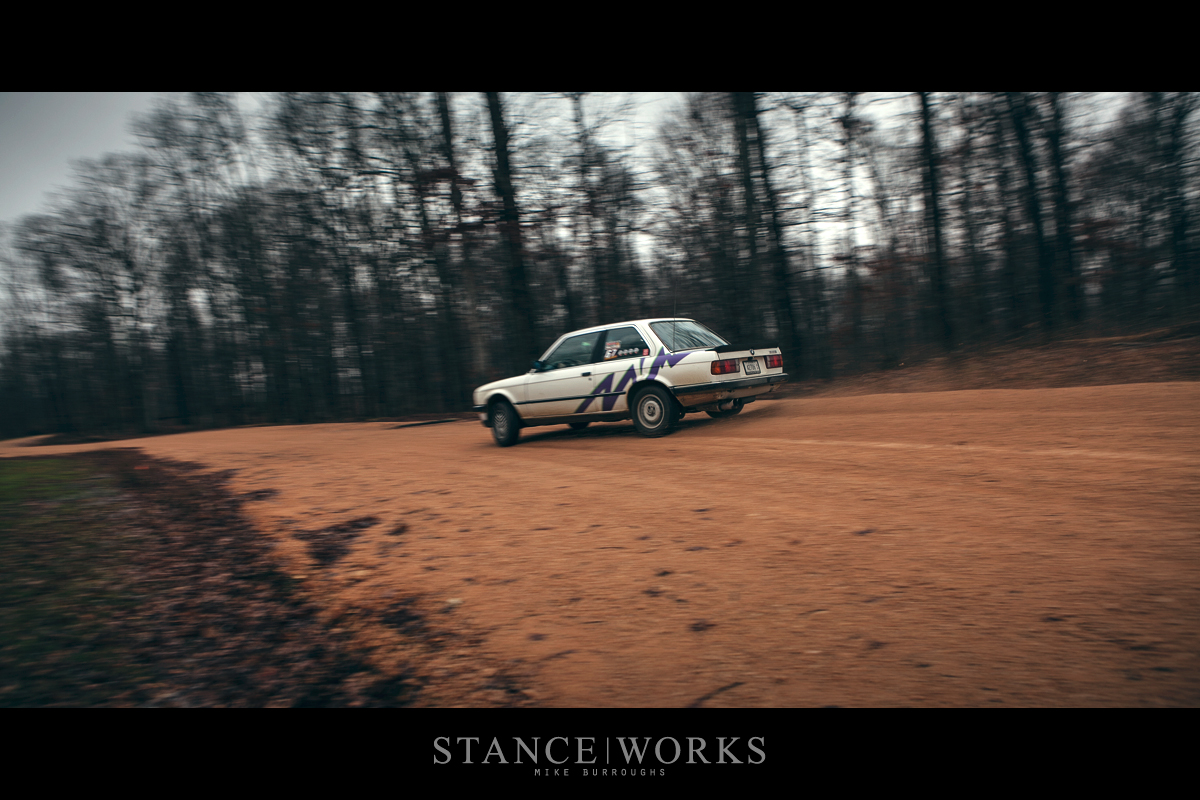 The day came in two parts, the first built around high-speed blitzes from Point A to Point B, complete with spitting gravel, tight switchbacks, and loose tail ends. Jack and Cory did what they do best, leaving a serious impression upon Emily and I as to how far their skills have come in the past nine months.  After making a few sprints back and forth behind the wheel of each of their cars, it was easy to see why the sport had them hooked. 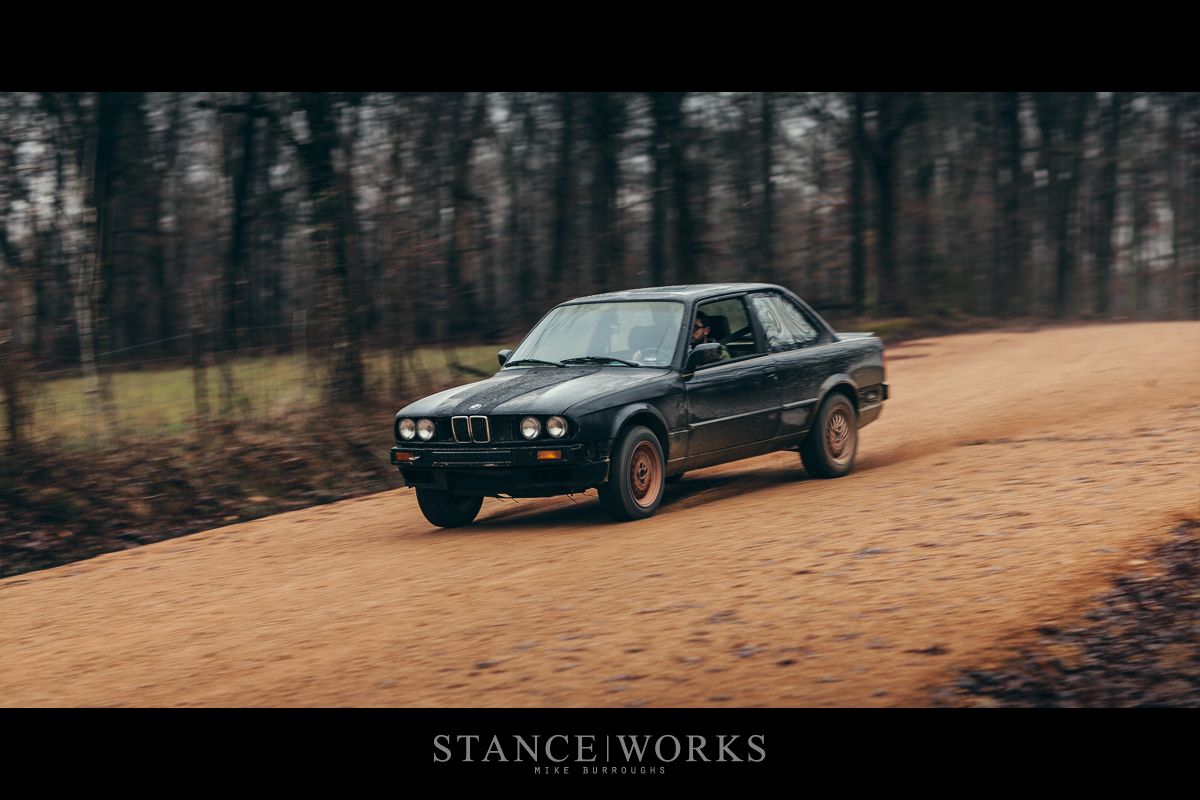 Even Emily got behind the wheel, eager to learn the relationship between countersteering and the rear wheels. After a few laps, she too was kicking the E30’s tail end about with impressive confidence. While in the passenger seat, the closer to the edge things were, the more laughs were had. 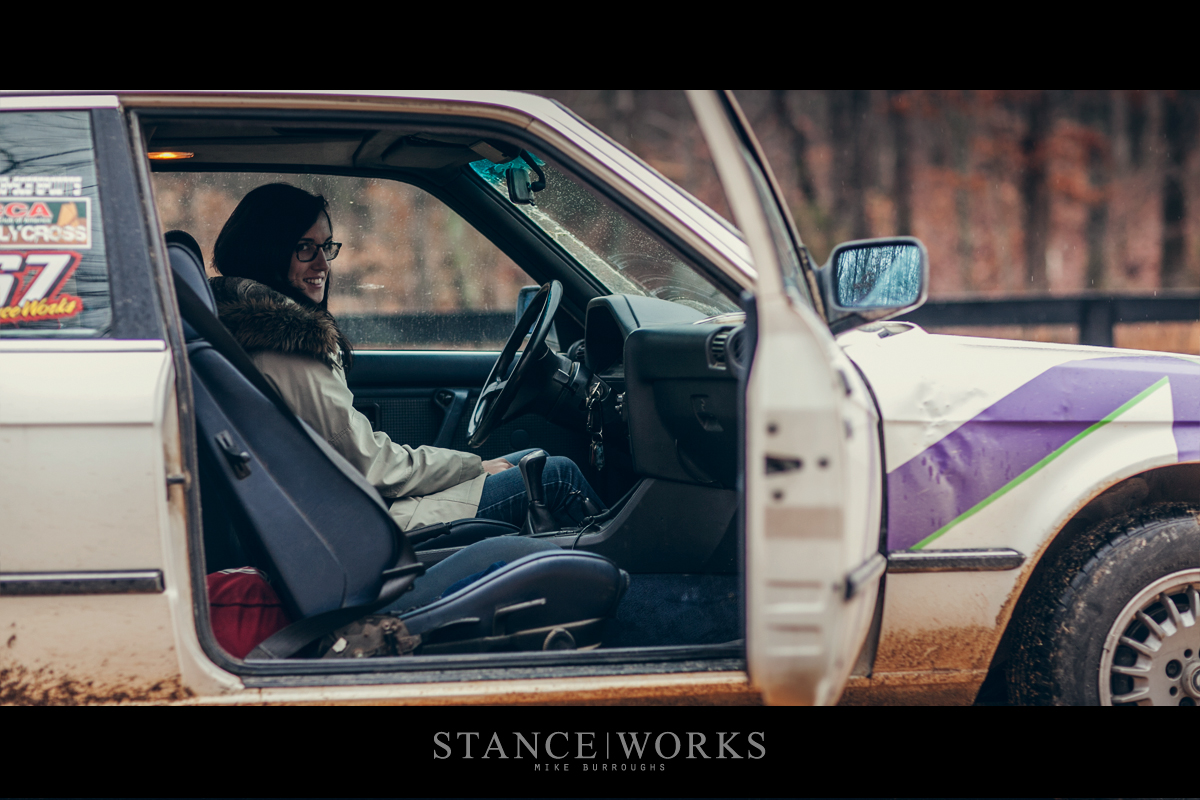 Both cars, despite being identical chassis, had characteristics all their own. Cory’s E30, a 325is with a full interior, had a good bit more power and torque, and the added weight offered a sense of safety as it carried speed through the turns. In contrast, Jack’s 318is, gutted to the gills, felt as though it skated across the top of the gravel, far more nimble in nature, but far less planted too. 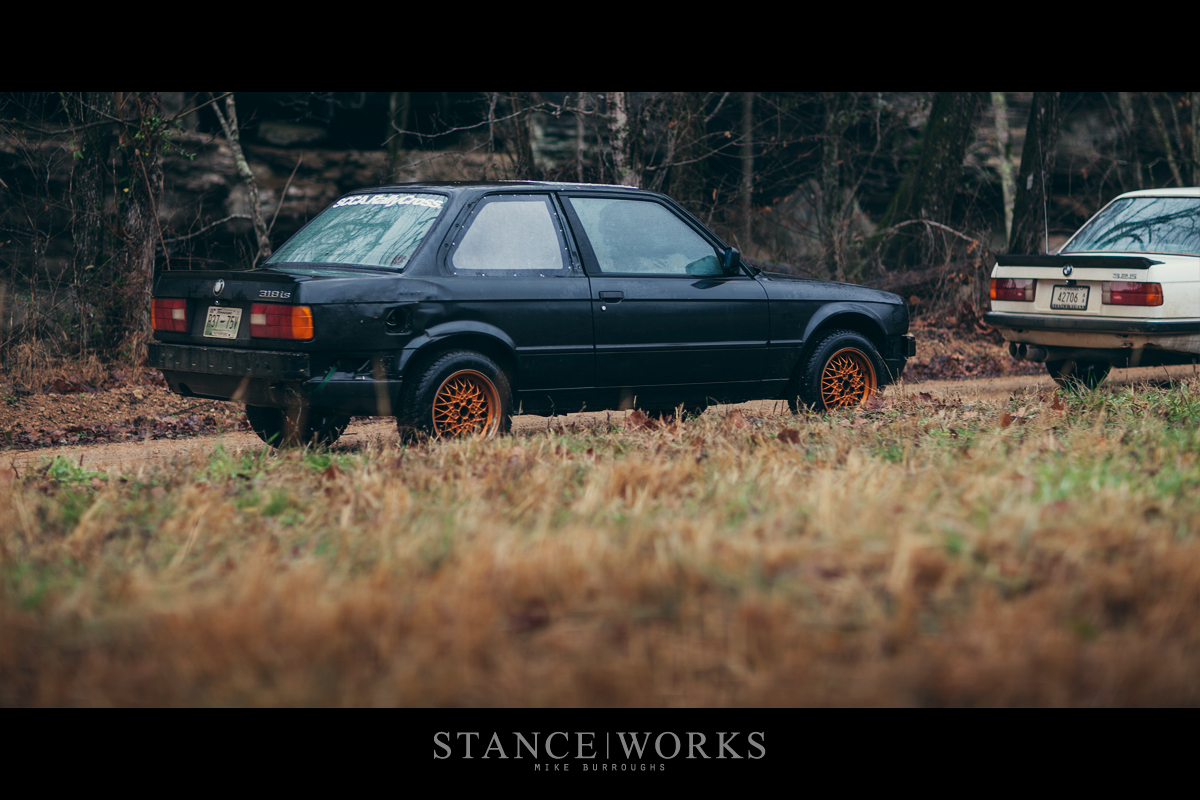 After several hours of pushing the E30s to their limits atop the loose auburn-colored gravel, we pushed on to deeper back roads. The borderline “trails” carried their own pace, more akin to a 4x4 trek, but the fun continued. 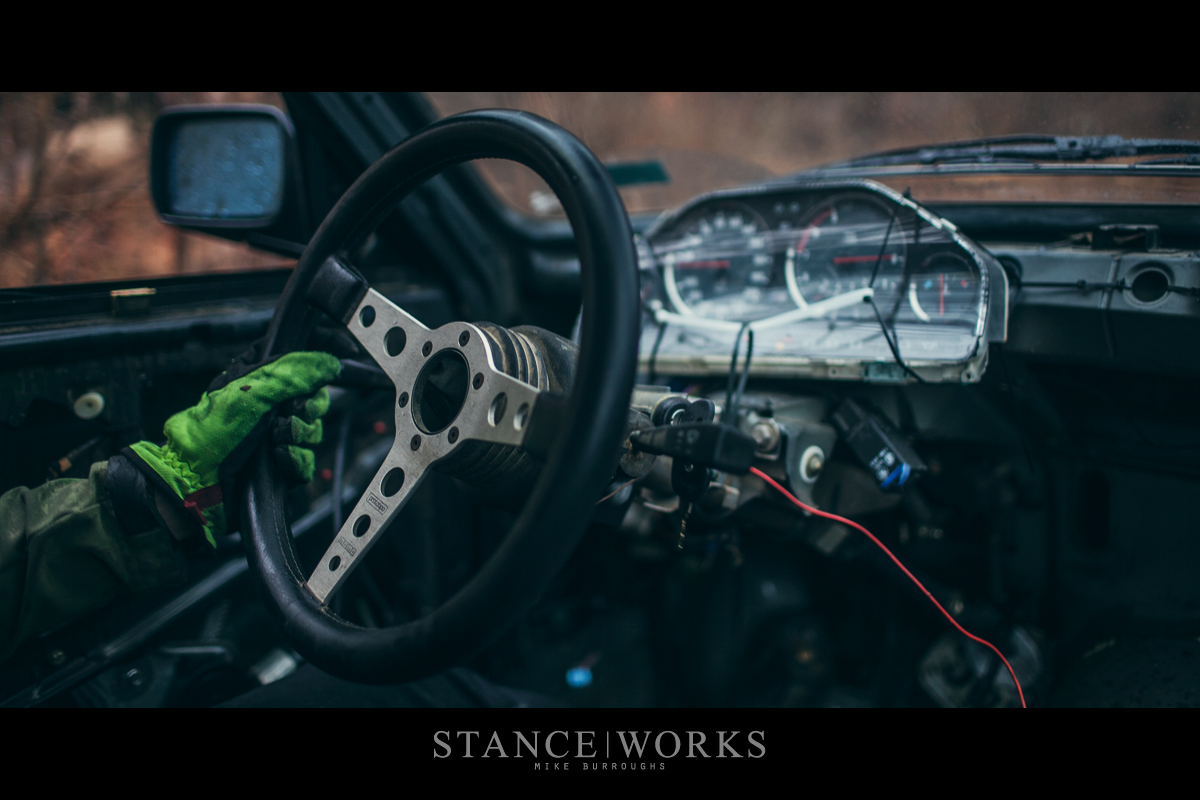 Preceded by a week’s worth of rain, our Sunday was a wet one, which offered unexpected challenges. Creeks and streams crossed our intended path, and while the trucks that normally travel these back roads have no troubles what-so-ever, BMW hardly has such in mind when it came to designing the E30. 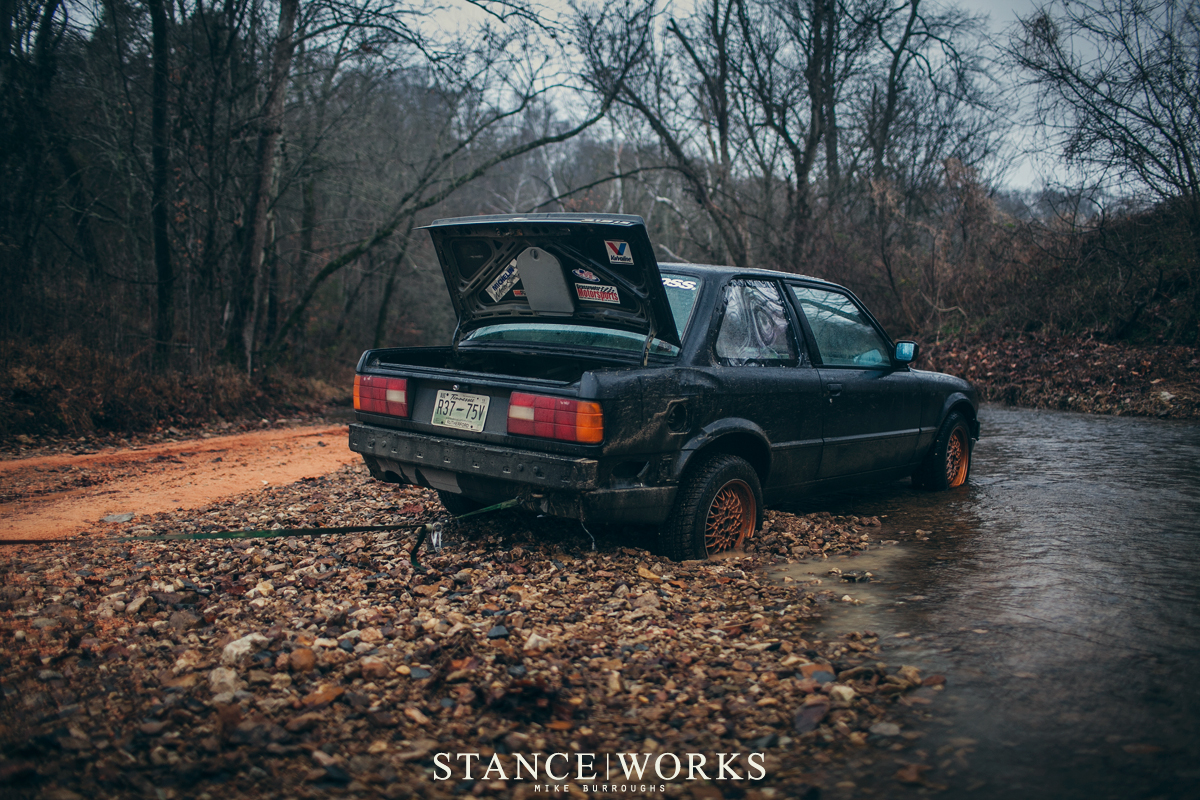 In planning our first crossing, Jack managed to stick his 318 deep in the loose gravel and mud, despite warnings and cries from Cory who had experienced a similar fate during his last outing. After deliberation as to how to recover the sinking E30, the cars were hooked together, and we gave it our all. 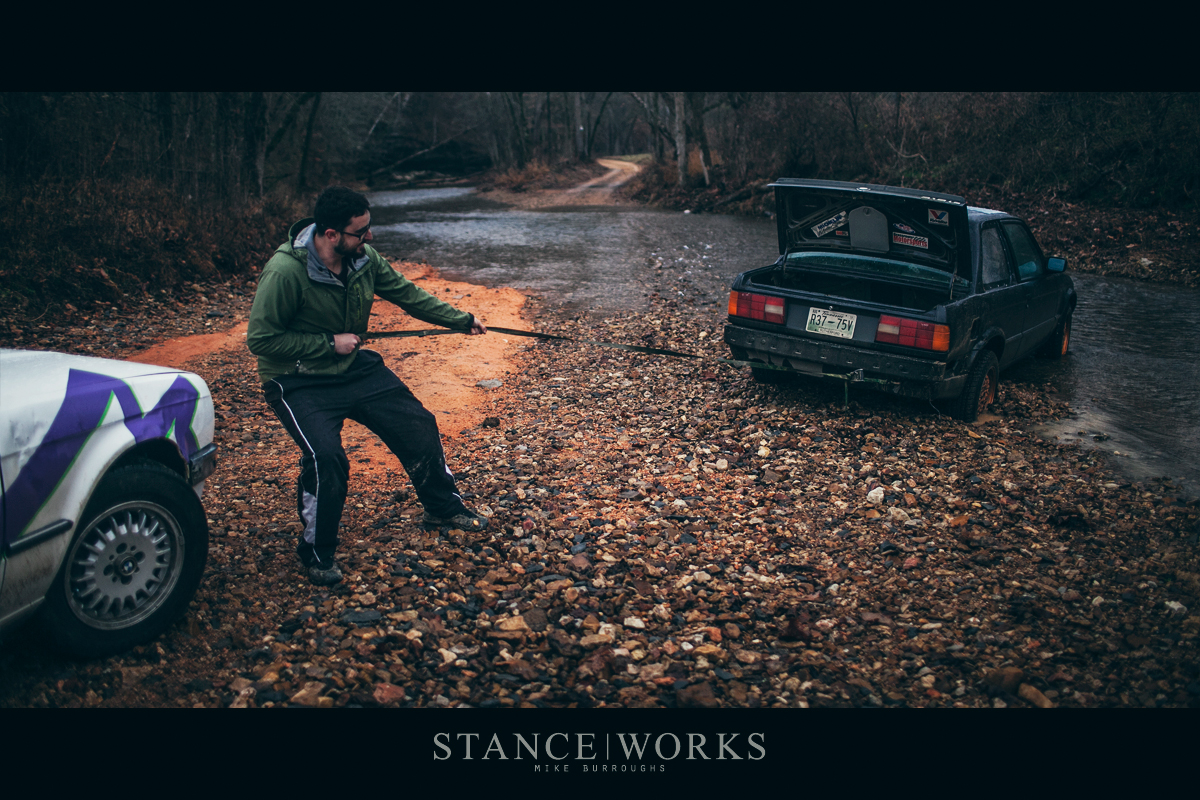 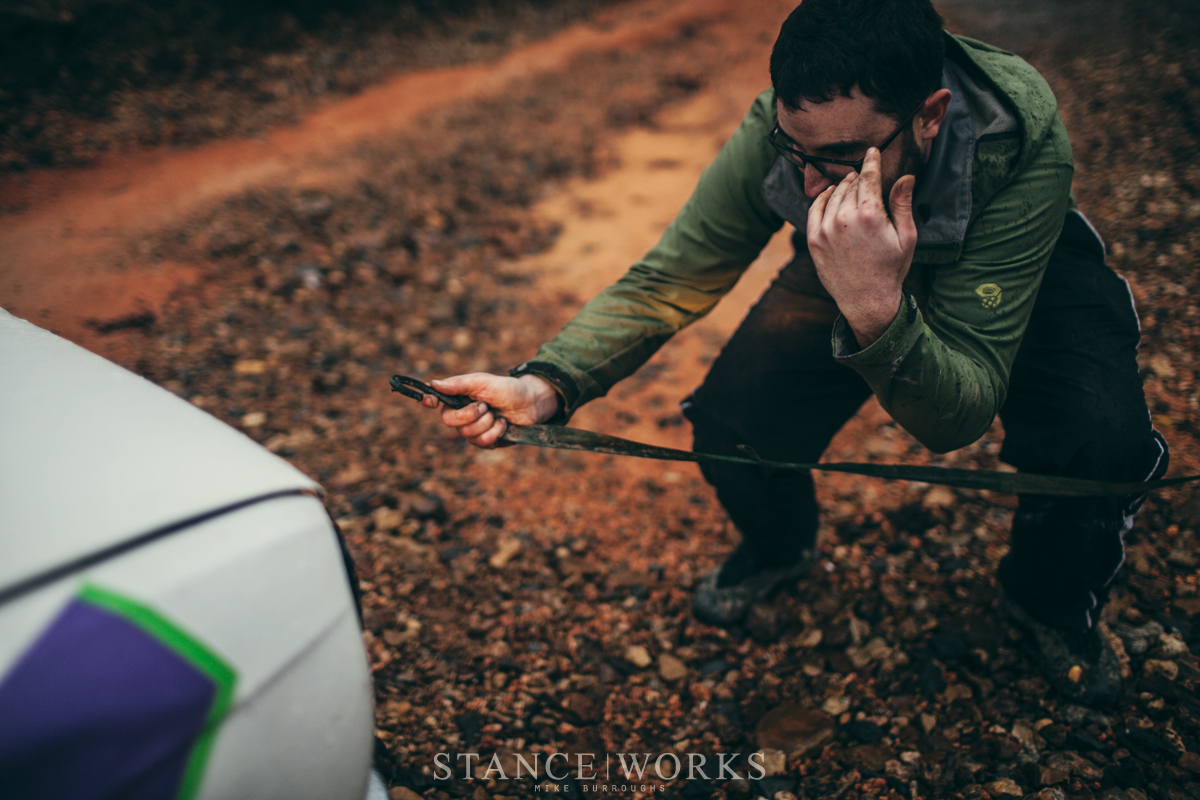 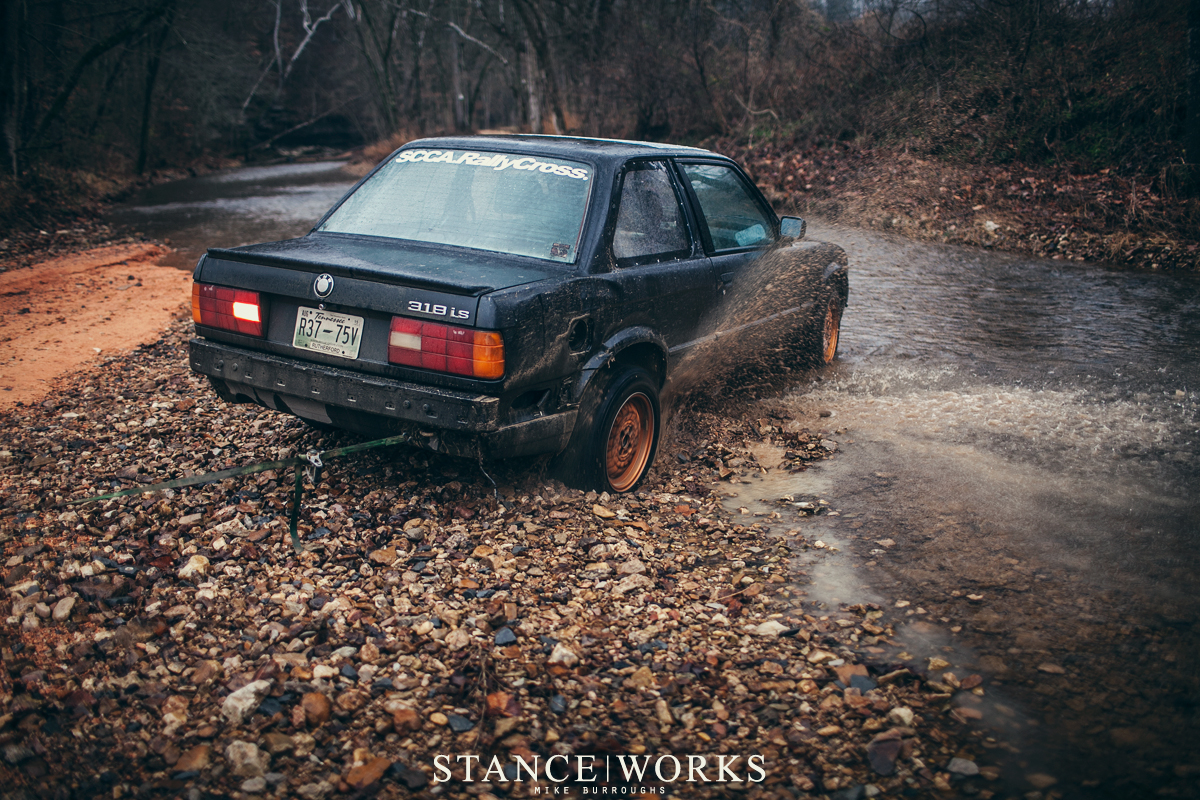 While the event was largely unnecessary, it reaffirmed our suspicions: speed was key in fording the rivers. Cory crossed first, with his entry speed rapidly diminished by the depth of the water. Slowed almost to a halt, he kept just enough forward momentum to make it through. Jack followed soon after; his stripped interior and hole-filled floor allowed water to enter at an unprecedented yet exhilarating rate. 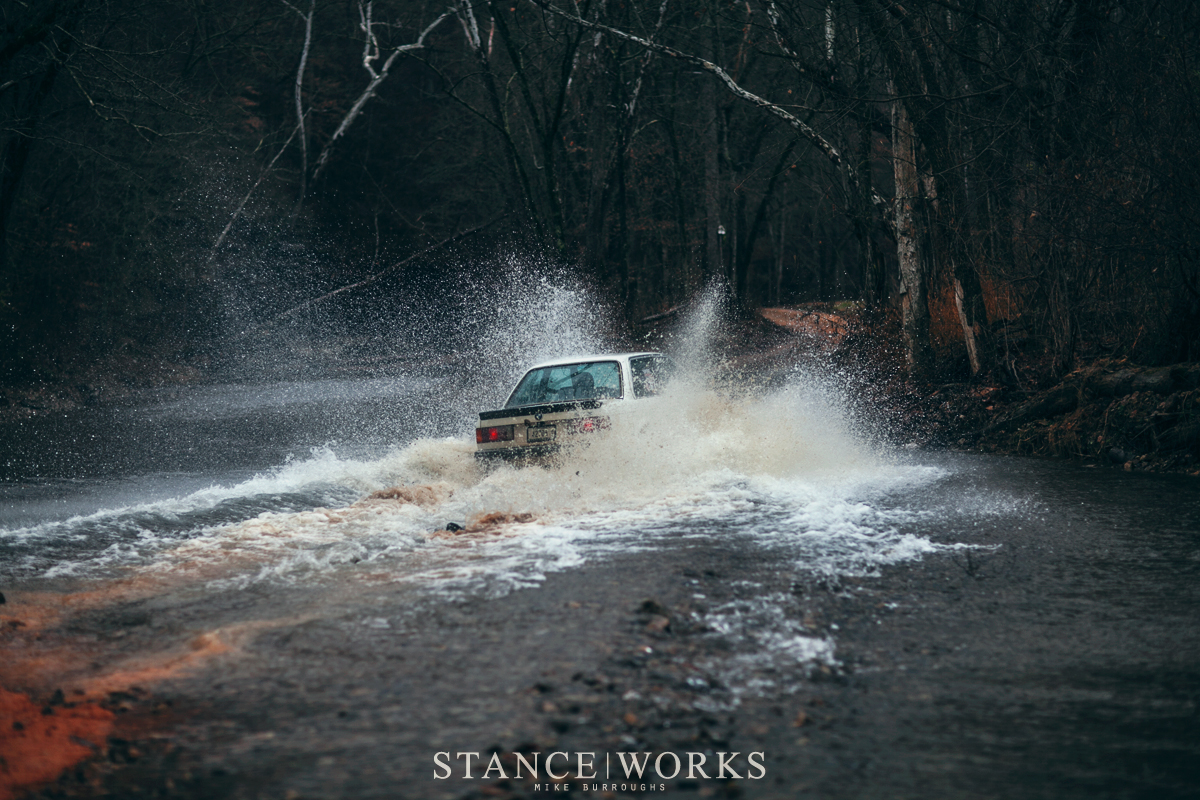 After crossing one, another came, this time with Jack taking the lead and Cory behind him. One after another the rivers cut us off, but with both excitement and serious anxiety, we conquered each one. 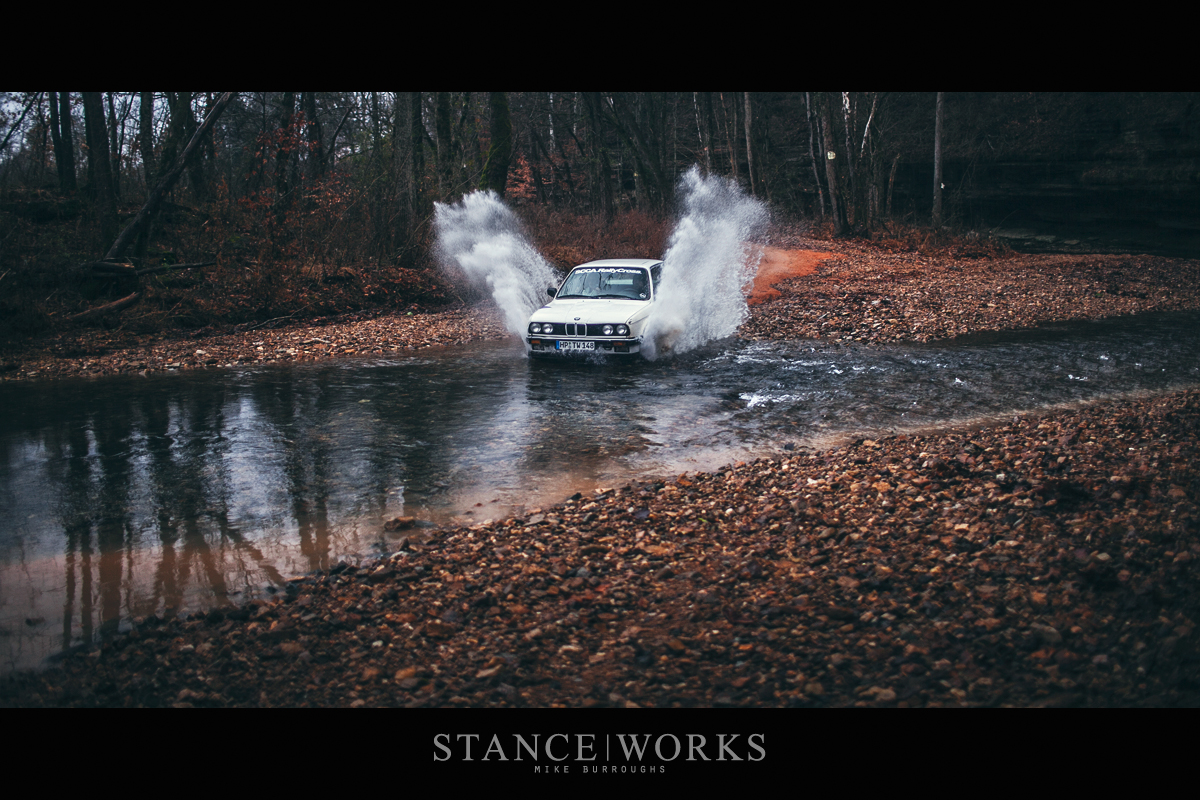 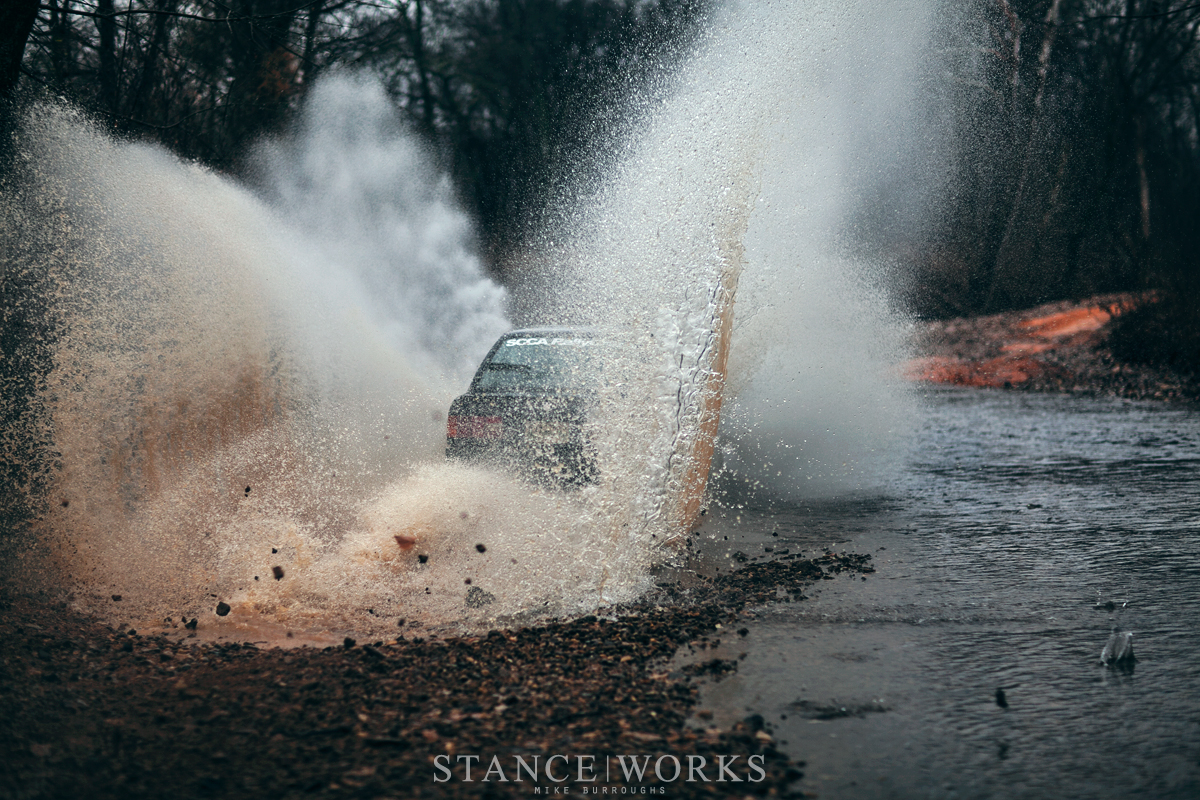 After making our way to the end of the final trail, the rain picked up and the sky fell darker, cluing us in to the  idea that it was likely smart to head home. We collected ourselves, and gave the tires one last good spin in celebration for a day well spent in the mud amongst friends. 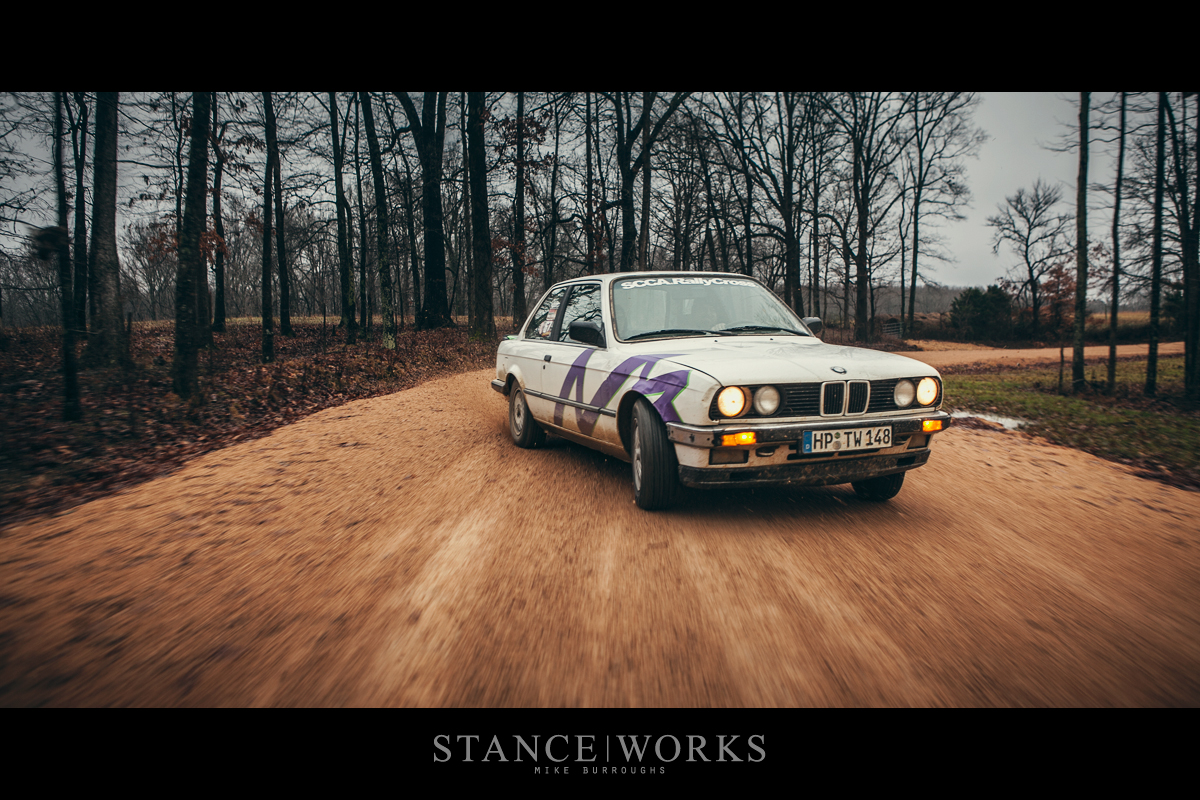