With BMW's launch of the F80 M3, the E90 and E92 are no longer the new kid on the block. Instead, they've officially cemented their position in the M3 legacy, and will, from here on out, presumably age like a fine wine. We will watch them depreciate in value for the next few years, but in due time, their place amongst the hierarchy of BMW M cars will ensure they're a classic in the future. However, most important of all is the now - with roughly seven years under its belt, the E92 has been around the block, and in some ways, it's safe to say that we've already seen it all. So how did Alex Goldstein separate from the pack? 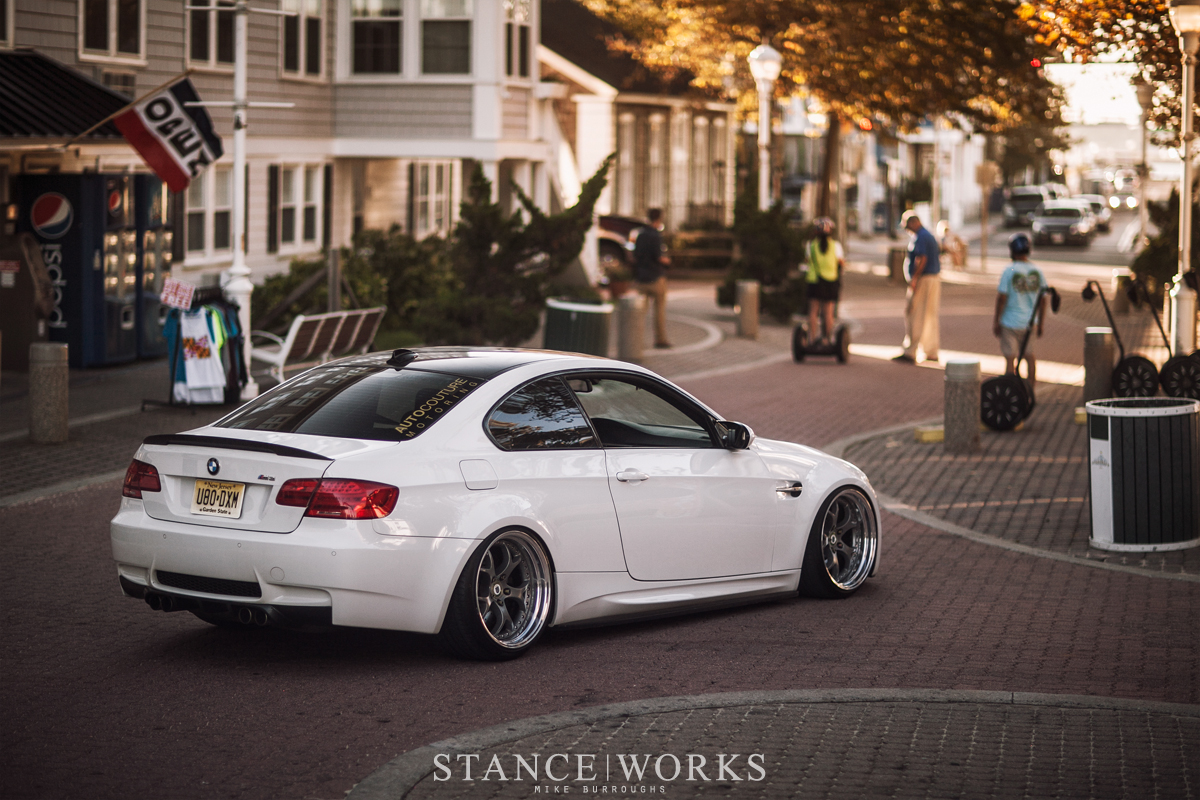 As has been the case with the E46 M3, the E92 often suffers from a common monotonous, unwavering mod list amongst its owners. There's a recipe for what makes a good E92 M3, and that's for an understandable reason: it's a recipe that both looks and performs phenomenally. Unfortunately, the result of such a system has lead to a level of diversity that has, in the past, felt somewhat lacking. "Cookie cutter" is far too dismissive, but on the other hand, what does it take to stand out amongst the crowd? 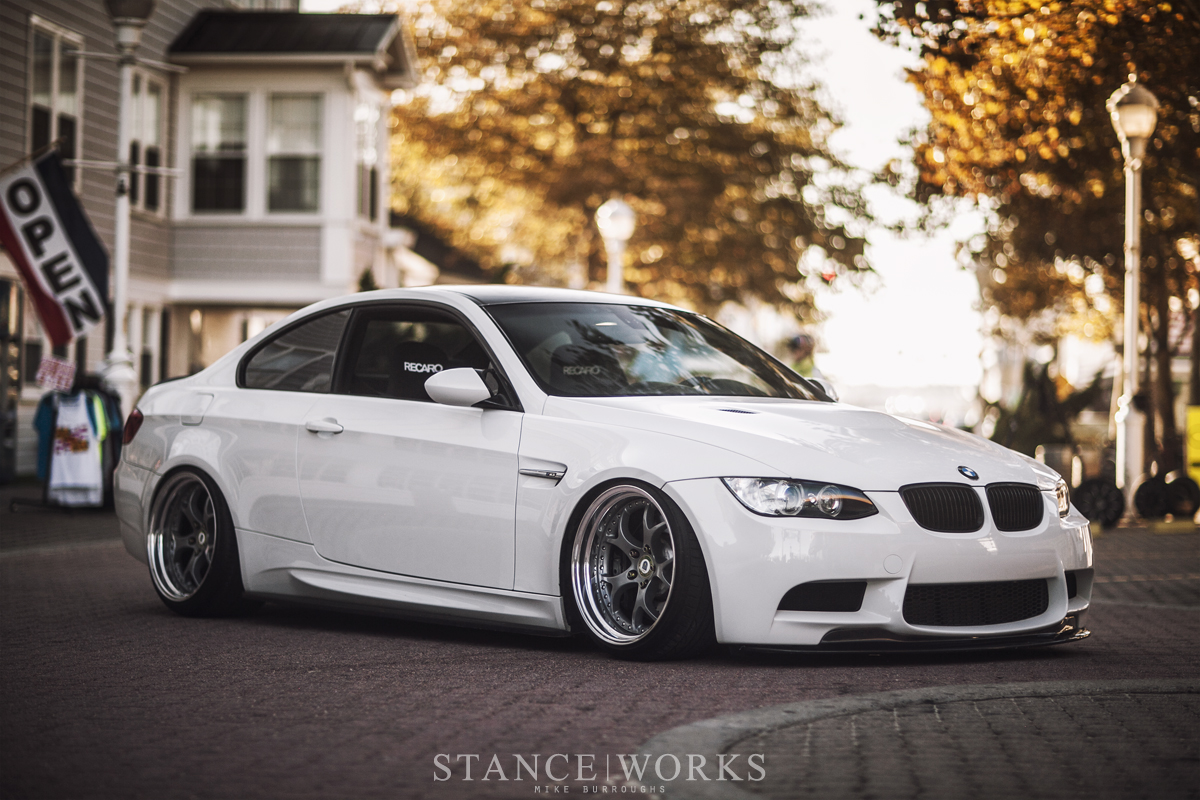 Alex Goldstein has, in our eyes, left the pack behind. While his build doesn't consist of extremes such as GT3 bodywork, 800 horsepower, or flashy paint, he's accomplished a level of finesse, with nuances and delicate touches that leave us wondering: is this how BMW wished the E92 had looked? 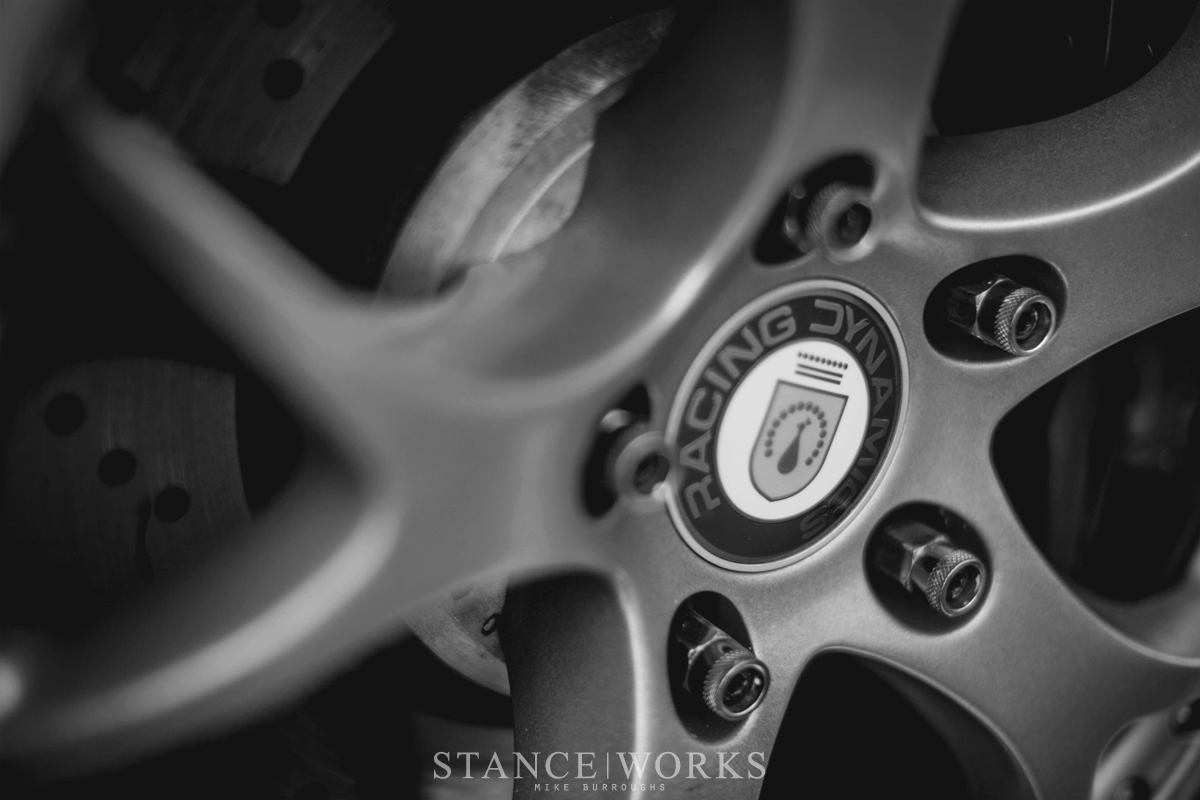 In 1987, Racing Dynamics made their world premiere at the Frankfurt Motor Show, where they introduced their own take on BMW's E32 7-series platform: the R35. Ever since, Racing Dynamics has continued to produce aftermarket BMW turning parts, engines, and more, earning their place amongst the likes of MK Motorsport, Hardy & Beck, and GS Tuning. To some, it's merely another brand in a sea of aftermarket parts, but to BMW diehards, it's a lesser-known piece of BMW's rich history of wild tuners. 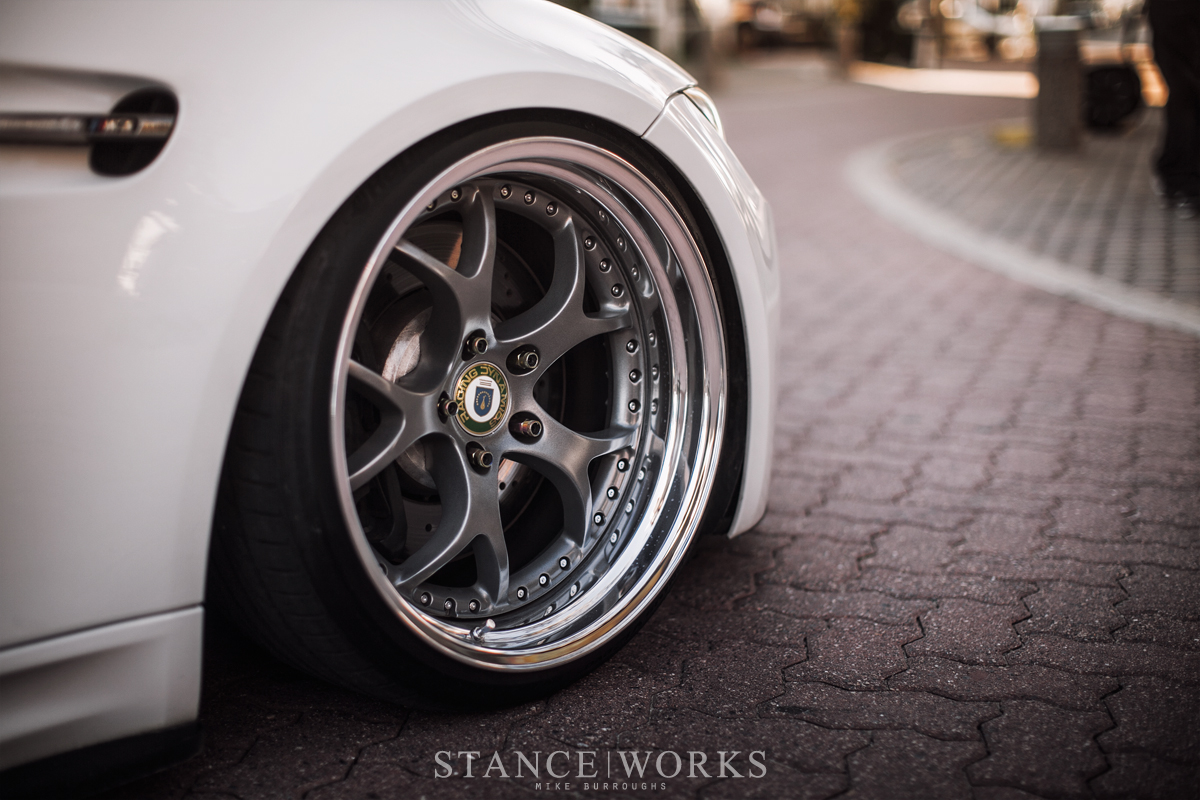 Today, it's the Racing Dynamics S4 wheels that play as the centerpiece to Alex's statement. Alex was quick to dive head-first into the build, knowing exactly what he both wanted and needed to achieve his goals. His first car, an E92 328xi, served as a way to grow intimately familiar with the platform, and the switch to the M3 was fluid and straightforward. "When I was on vacation, I decided it was time to begin a new build, and started the search while still in Mexico. Upon returning to the States, a friend of my father's who works at the local BMW dealership just so happened take possession of an M3 trade-in that same day." 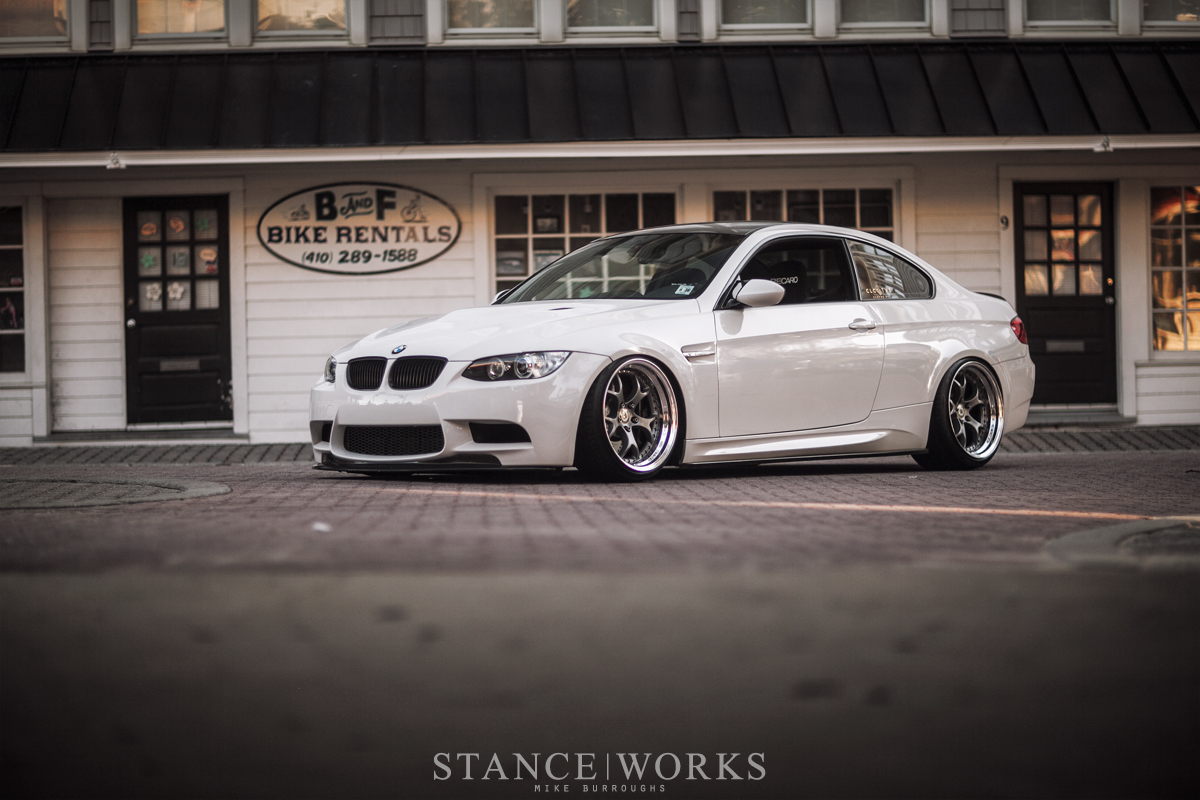 Just 10 minutes away from his house, Alex made the trip over to see the car. Despite its small flaws, Alex knew right away that this would be the car. The buying process went quickly, and so did the transformation. Within 24 hours, Alex had already purchased the essentials: an exhaust consisting of a Dinan X-Pipe and an AUTOcouture Motoring rear-section, and an ESS tune for the ECU. Within two weeks, Alex had tracked down the Racing Dynamics S4 wheels, measuring out to 19x10 and 19x12, and had made the purchase. 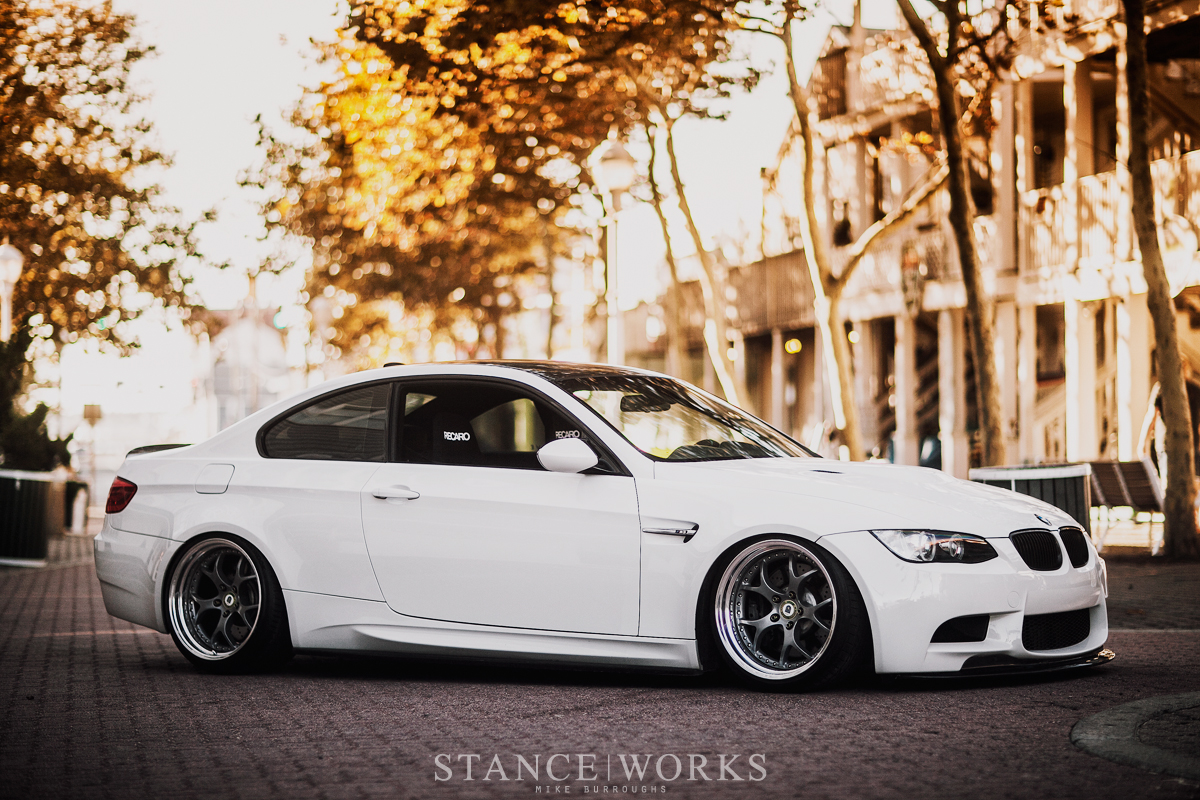 Broadway Static supplied the suspension for Alex's build. While the car is sure to raise the eyebrows of skeptics, the 14k and 28.5k front and rear springrates, combined with the Rogue Engineering toe and camber arms, keep the car from rubbing and scraping under almost any circumstance. "I wanted the car to be low and fitted but without rubbing. Previous attempts of fitting 12" wide wheels on E92 have resulted in destroyed quarters; that was not an option for me." 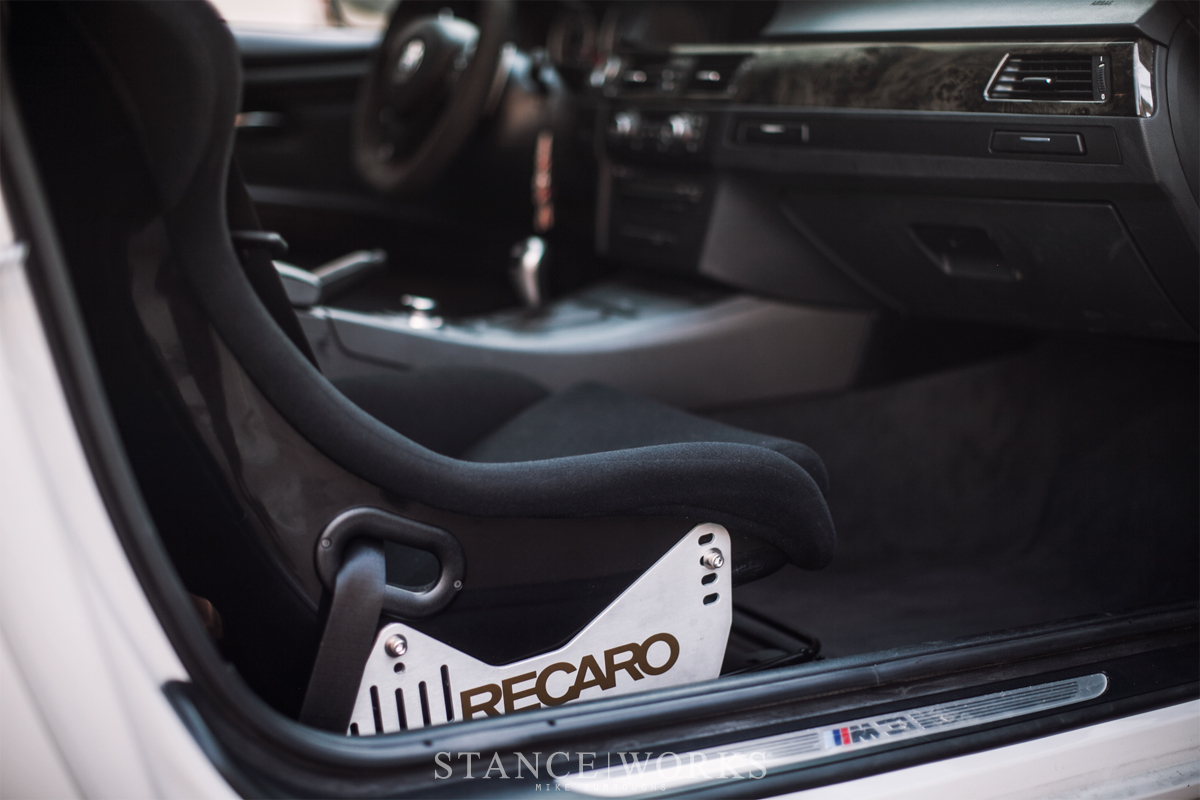 The aesthetics of the car were furthered, with a Mode carbon front lip. "I wanted something that didn't hang low, and instead just took up some of the empty space in the front." The sides of the car were fitted with Platte-Form AG skirts, and a Vorsteiner diffuser was mounted to the rear. The bumper's reflectors and headlight washers were shaved for a sleek, polished look. Recaro Pole Position seats and an OEM M-Performance steering wheel add a sport-package-plus feel to the interior without screaming "aftermarket." 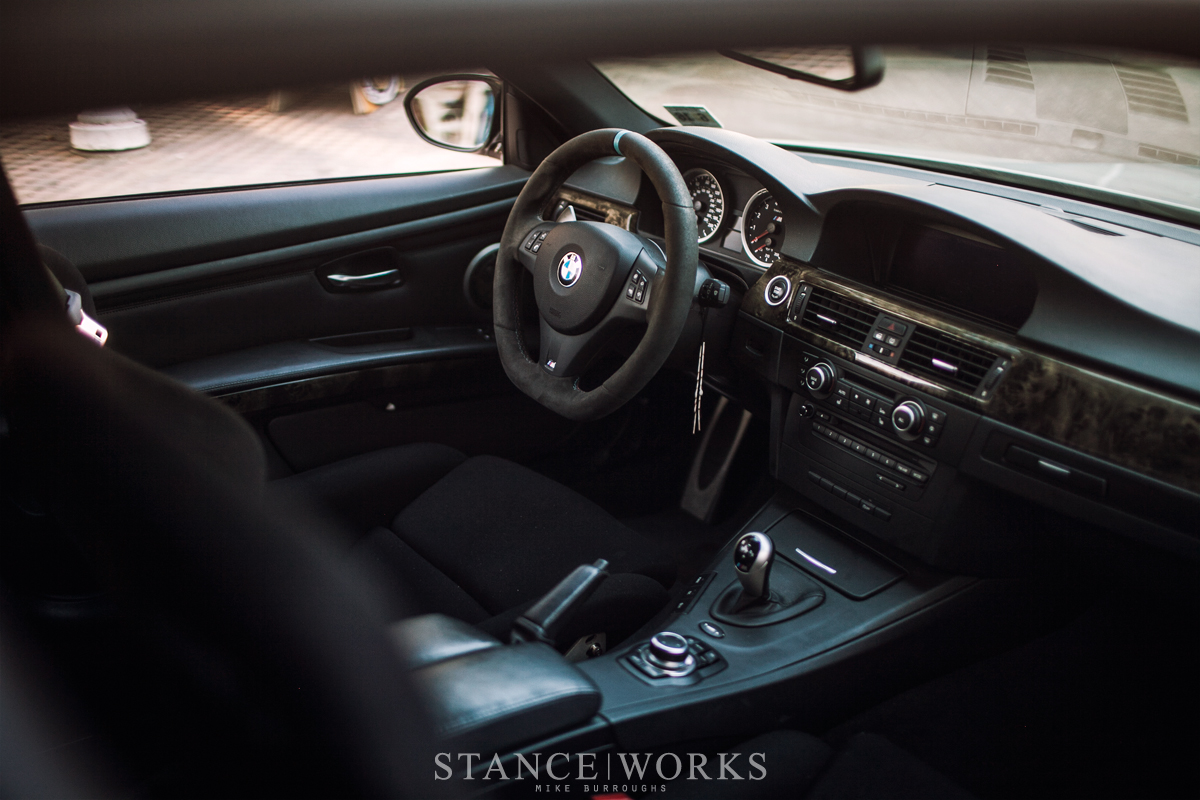 The end result is, of course, a car that exudes an air of simplicity and a sense of professionalism, all while running the E92 chassis's aesthetics at the edge of the "comfortable" limit. Despite the fact that BMW's E92 is now "old news," Alex has ensured that it certainly won't look dated. 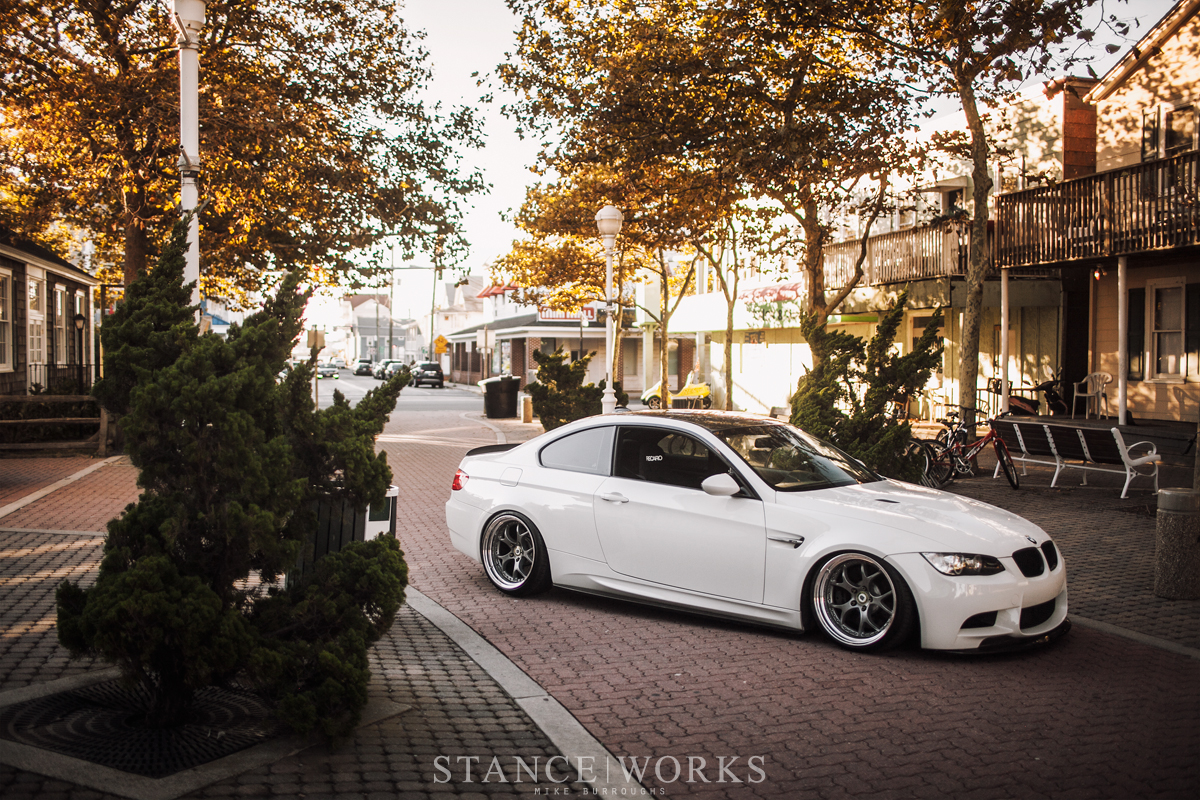