Our tastes change dramatically as we make our way through life. Things we thought were silly as a kid begin to appeal to us, living with financial responsibility starts to gain importance, and a good night's sleep becomes a necessity rather than a rarity. Cars we previously scoffed at begin to seem oddly appealing, and you hear yourself say things such as “You know the sliding doors and storage space on that mini-van really would be quite nice.” Okay, that might be a bit of an exaggeration, and hopefully we will never hear ourselves make claims quite that scary, but our tastes certainly do mature as we age. Christopher Björåsen, the man who owns the stunning e28 you see before you, certainly did not have a head-over-heels, love-at-first-sight relationship with the '80s 5 Series. In fact, his first time seeing one, he thought they were, in his words, "butt ugly". “I was 10 years old, and I was at a friends house. His grandparents came with a stock 518 and I couldn't understand how anyone could buy such an ugly car.” Times certainly have changed however, with e28s playing a large role in Christopher’s life today  and over the past 15 years. 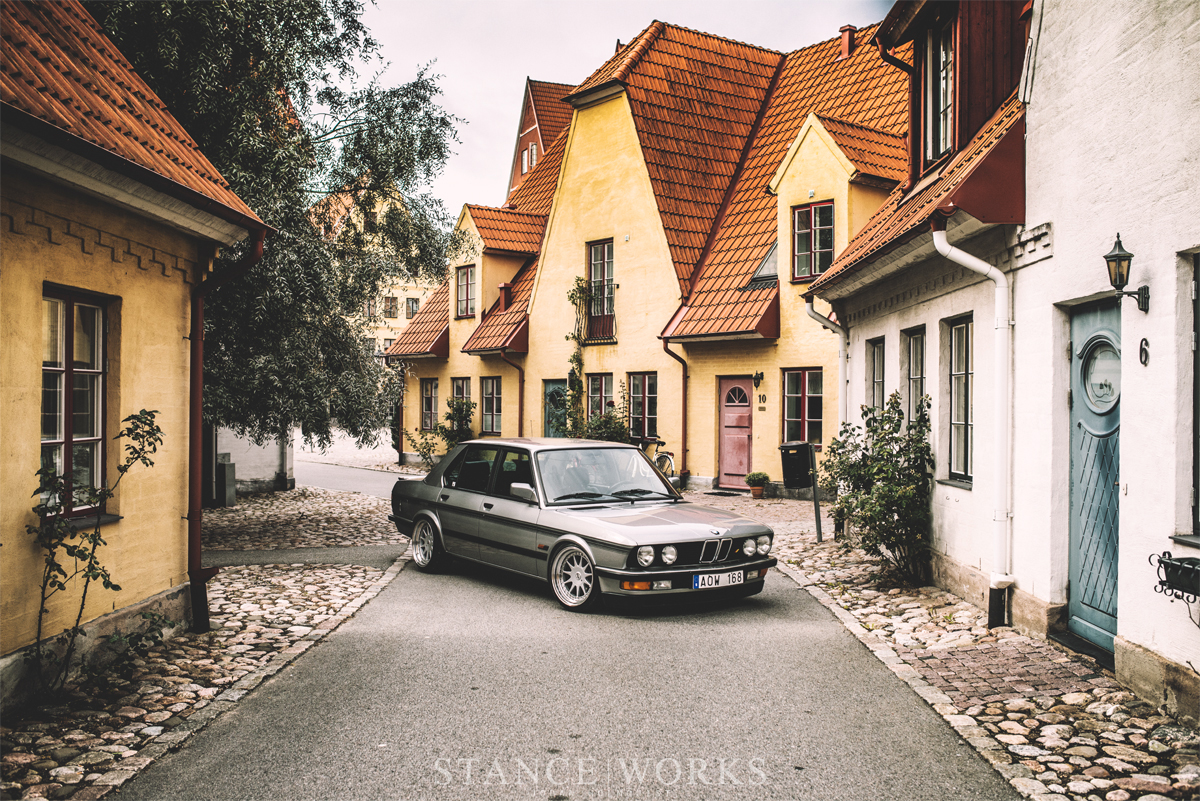 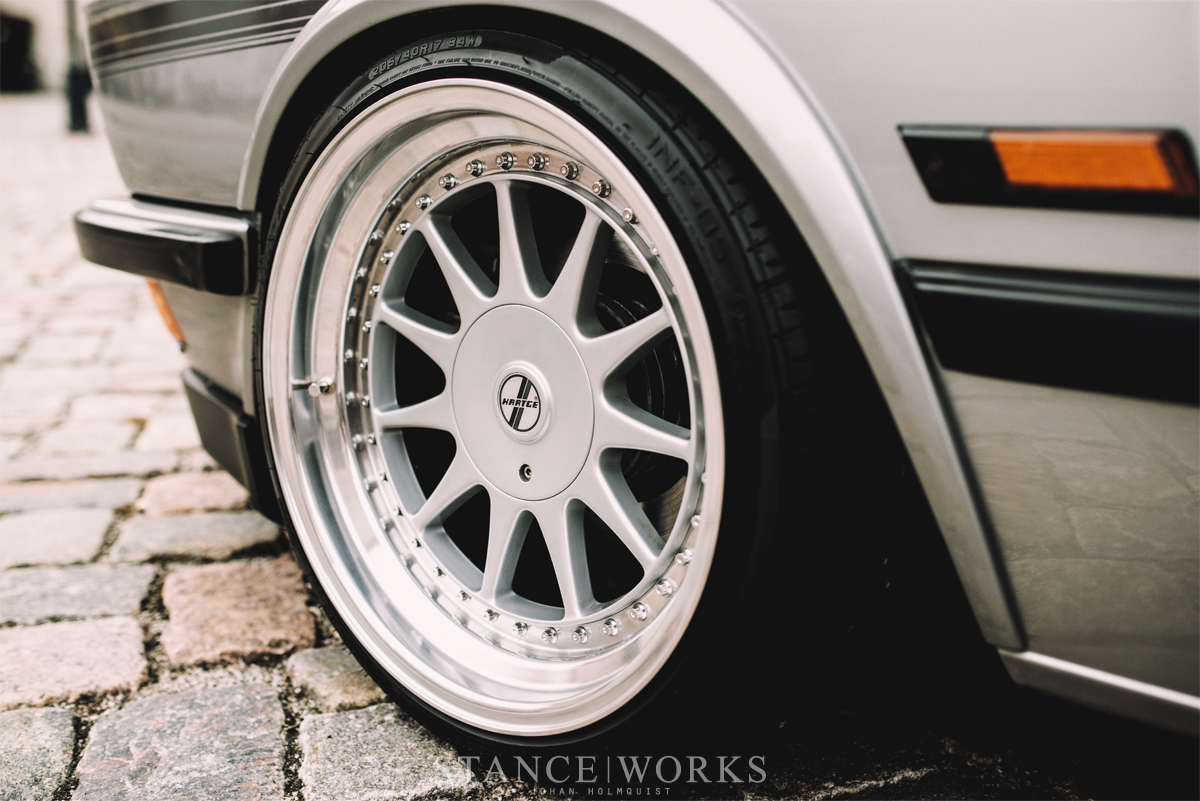 Christopher originally took notice of e28s in a positive light when he saw a maroon 528 romping around down at a local hangout. Something changed in how he saw the car compared to how he originally felt, and in a big way: he knew then and there that he had to have one. Christopher then purchased his first e28 soon after getting his license in 1999, a black 528 with the M-package. The car did not disappoint, and Christopher got bitten by the e28 bug hard. He has since owned 8 more, including a rare Liebig turbo model among more standard 520s, 528s, and 535s. In 2008 he picked up a 1985 M535i, the first car he started to work on getting low to the ground with aggressively fitting wheels. 18” BBS RKs were mounted on the car and it was given a healthy drop, resulting in an aesthetic he loved. Although Christopher was fond of the RKs, the new wheel itch we are all familiar with started to come around, and he couldn’t help but to scratch it. He picked up a set of wheels he was even more enticed with: a set of 17” Hartge splits. He started a lengthy refinish project on the wheels, and just as he was about ready to mount them on his M535i, he stumbled across an ad for his current e28, a “Hartge” model with 80,000km, still in the possession of the original owner. Although he was content with his current car, something about this car seemed special, and he decided to go check the “Hartge” car out. 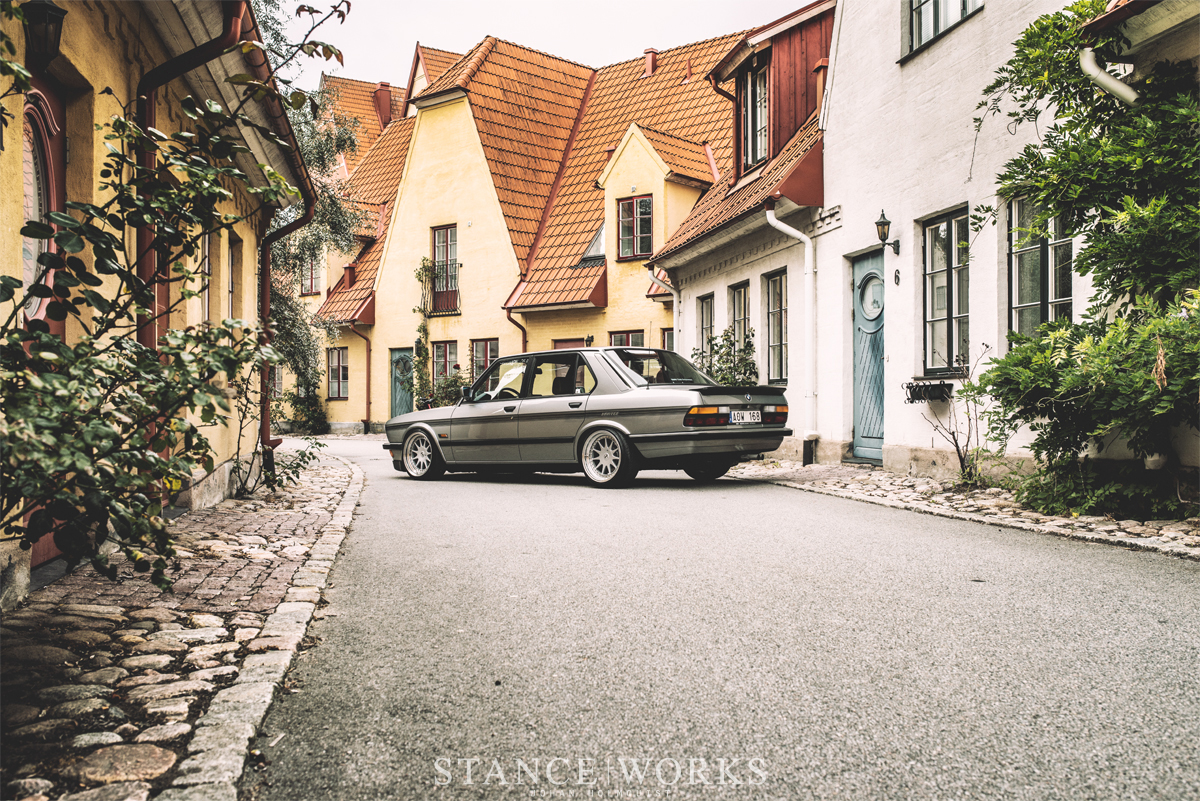 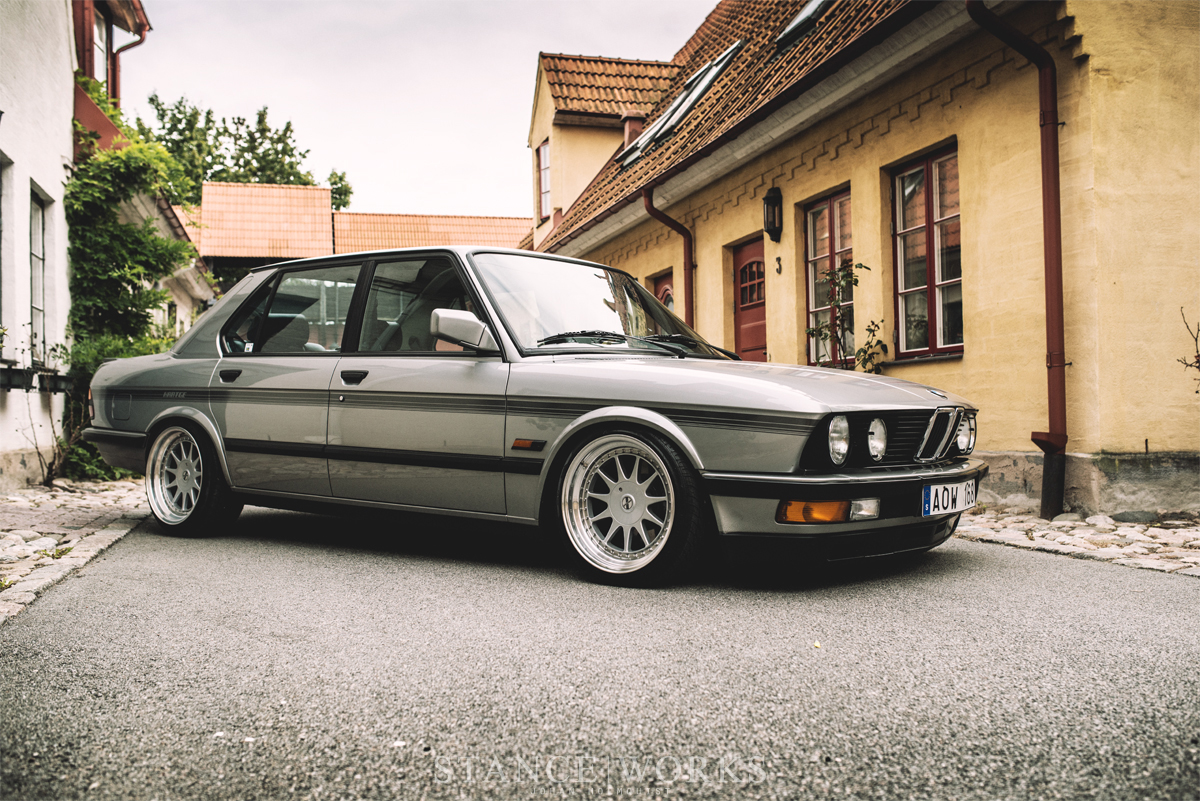 Unlike Christopher’s first experience with e28s, seeing the 1985 535i in person was love at first sight, knowing immediately that he had to have it.. “As big as an e28 freak I am, this was truly the dream car. So perfect and so well preserved! This was like a once in a lifetime opportunity and I couldn't pass it up.” He put a deposit down on the “Hartge” 535i and sold his M535i shortly after to fund the rest of the purchase. He picked up the car up in September of 2012, and has spared no time in getting to work on it. The car is not a true Hartge car, but did come with quite a few Hartge goodies, such as the striping and full leather dash setup. Christopher has been slowly amassing more genuine Hartge parts for the car as he is able to find them, such as a genuine Hartge wooden shift knob, as well as a genuine rubber rear deck spoiler (not installed for the photos). He is keeping his eye peeled for pieces such as the valve cover and steering wheel, hoping to make the car a true Hartge homage when all is said and done. 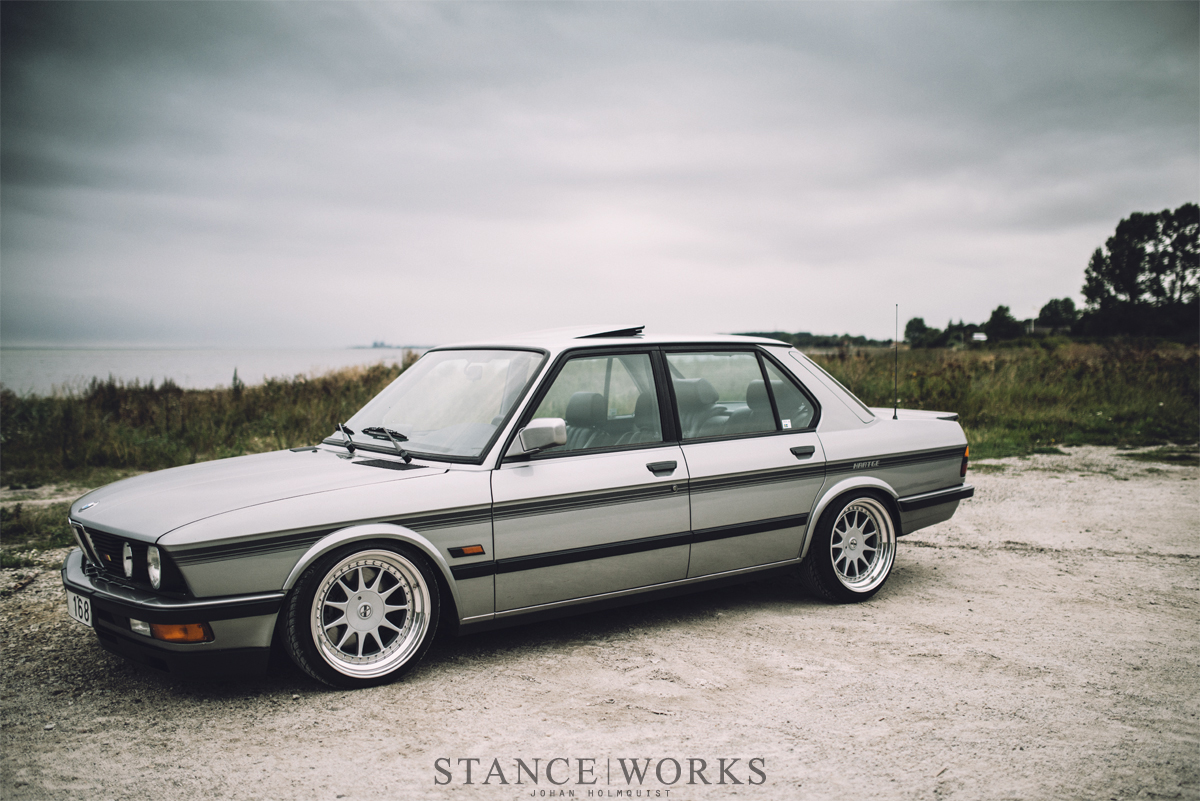 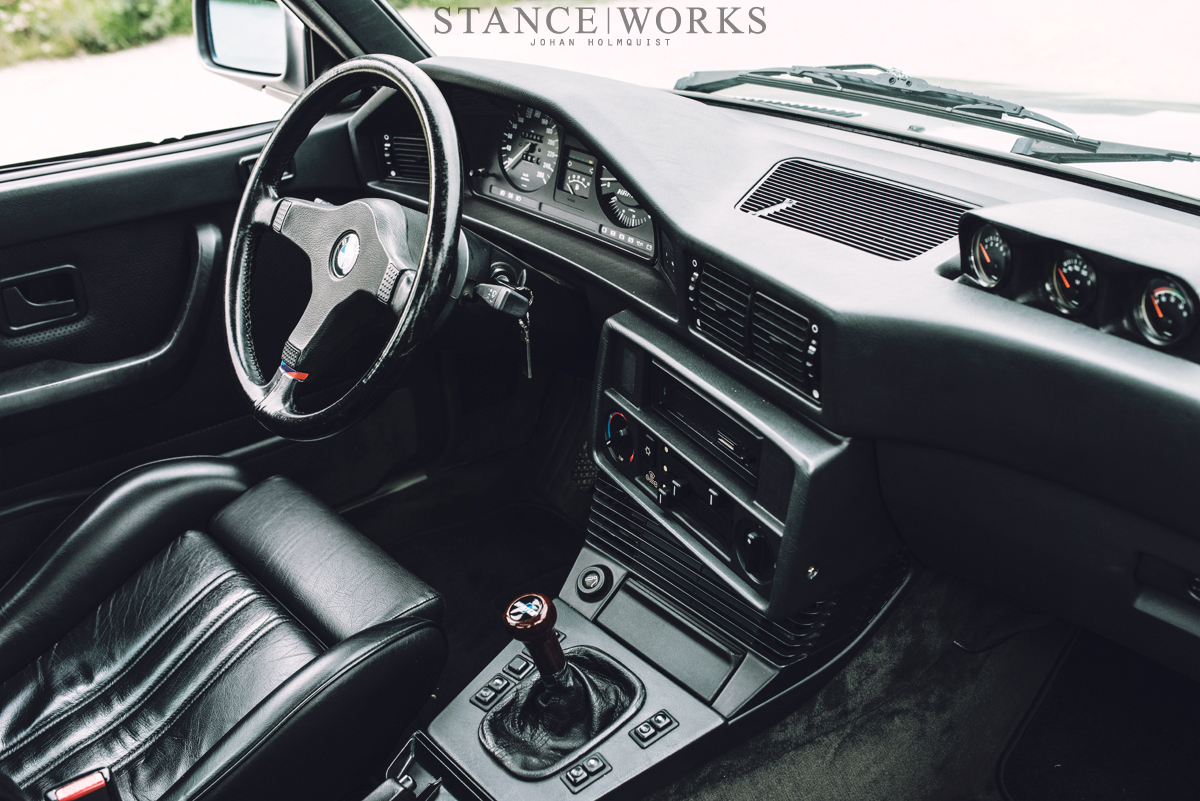 Christopher knew he wanted the car to sit low, and got to work on fitting the set of Hartge wheels he had already acquired. The wheels are 17x8.5 in the front, and 17x9.5 out back, with 205/40/17s and 215/40/17s respectively. Chris would like to go lower, but the cars extremely thick rear fenders aren’t being cooperative with the aggressive offsets on the Hartge wheels. He has a few tricks up his sleeve that he hopes will allow him to resolve this however. Given that he does drive the car quite often, and does enjoy driving it hard, he upgraded to e34 M5 front calipers and rotors, paired with new steel braided lines and upgraded to an e32 750 brake cylinder which pairs far better than the factory unit with the new brakes. An e28 M5 front spoiler helps route the air towards the front brakes, as well as completes the look of the front end. The sway bars were swapped out for the thicker e28 M5 units, and XYZ coilovers keep the car suspended and wheels firmly planted on the road. 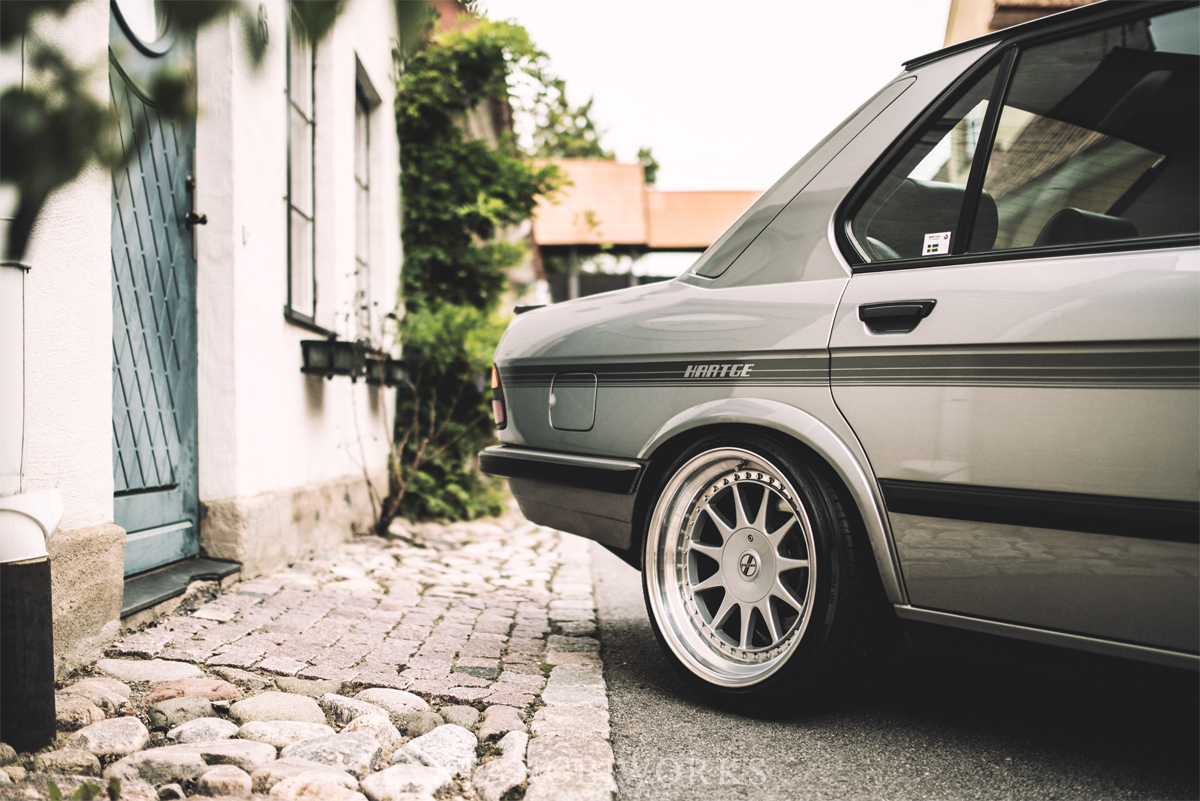 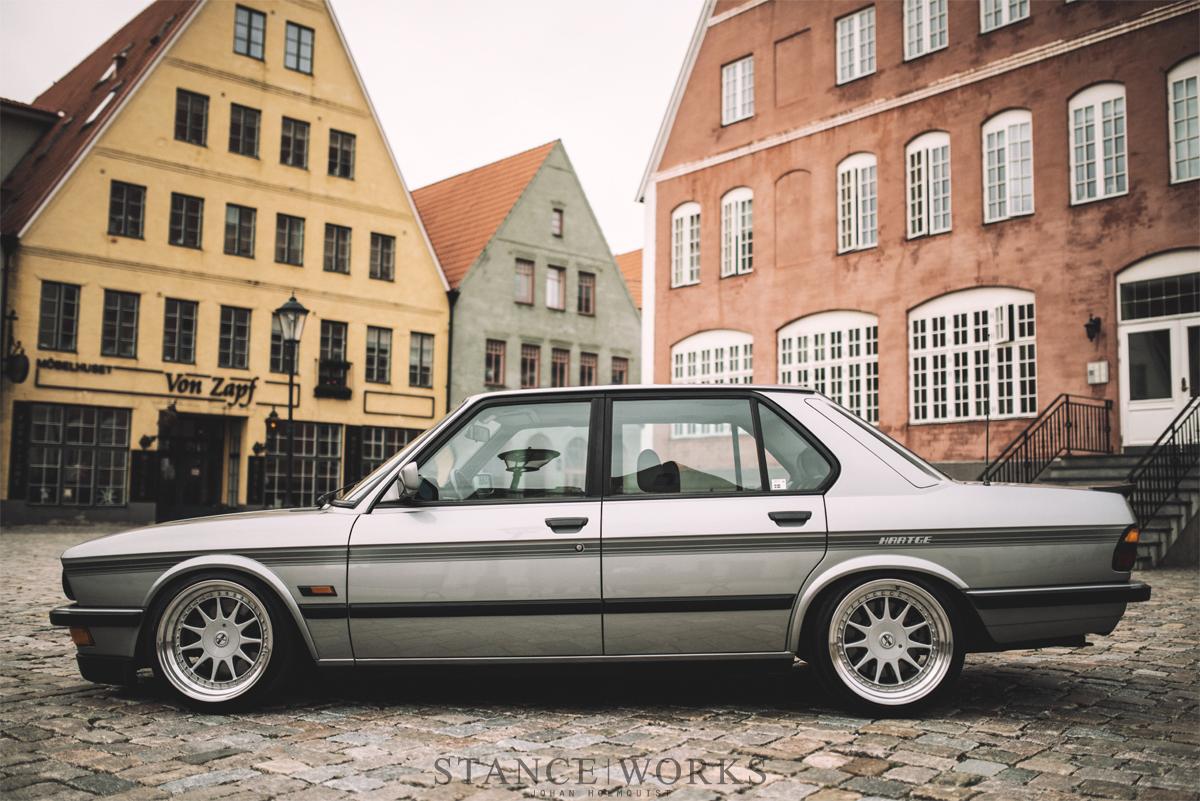 The result of the carefully chosen modifications is one seriously stunning e28.  Christopher has already amassed an impressive 13,200KM on the car - not someone who is scared to drive his cars a long distance, a trait he believes he got from his father who was a truck driver, and the many miles spent with him going around the country when he was younger. Given his track record, I can’t imagine this will be Christopher’s last e28, but it is certainly one of the most impressive cars I have seen. I personally, of course, am quite fond of e28s, even though I too initially was not. It often takes seeing a particularly well done car of a certain chassis to open your eyes to the potential hiding in the less than stellar factory trim. The Maroon 528 seen at this local hangout opened Christopher’s eye’s to the e28 chassis, and I can’t help but imagine that he in turn will open quite a few people’s eyes with the gorgeous 1985 535i he has created. 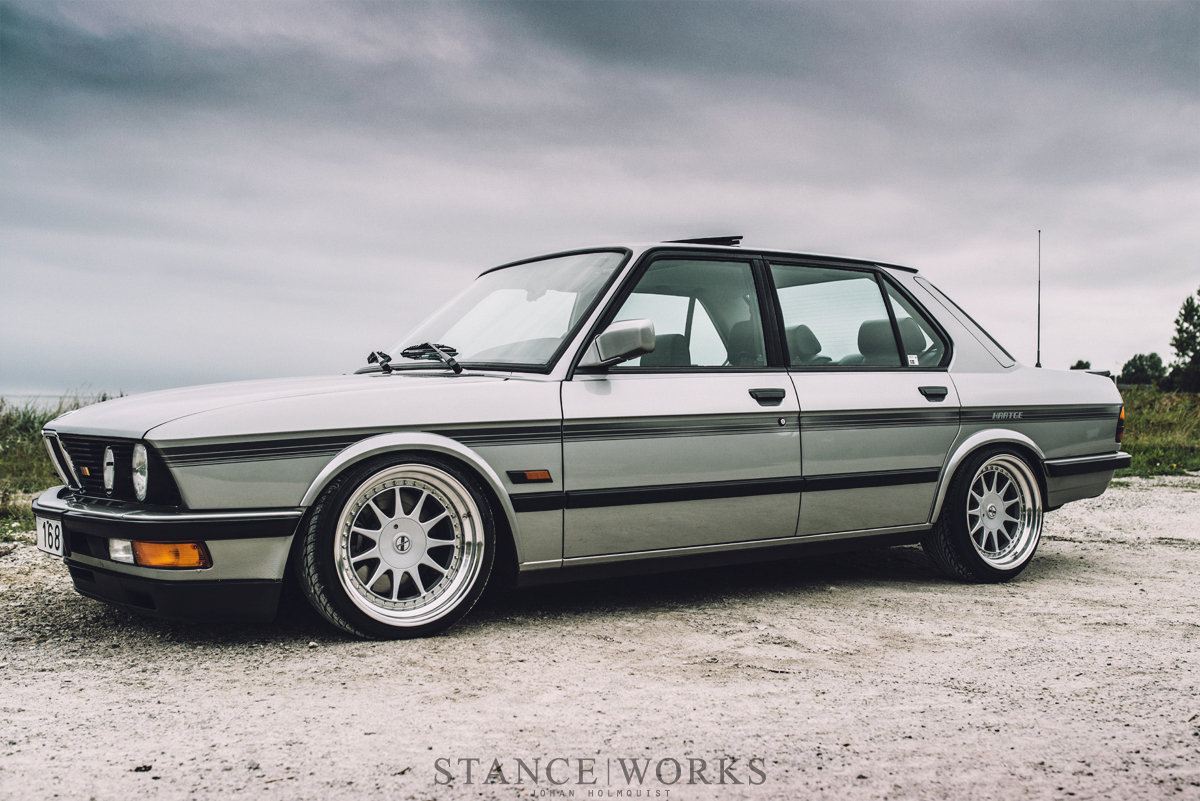