Air ride, 3 piece wheels, and flawless paintwork: the recipe for a "proper" car. A laundry-list of parts and a serious investment (combined with good taste, of course) typically end up in a noteworthy build, but every so often a car comes around that has somehow broken the mold; built with second hand parts, lucky finds and pure character. Case in point: Alex's 1984 E28. 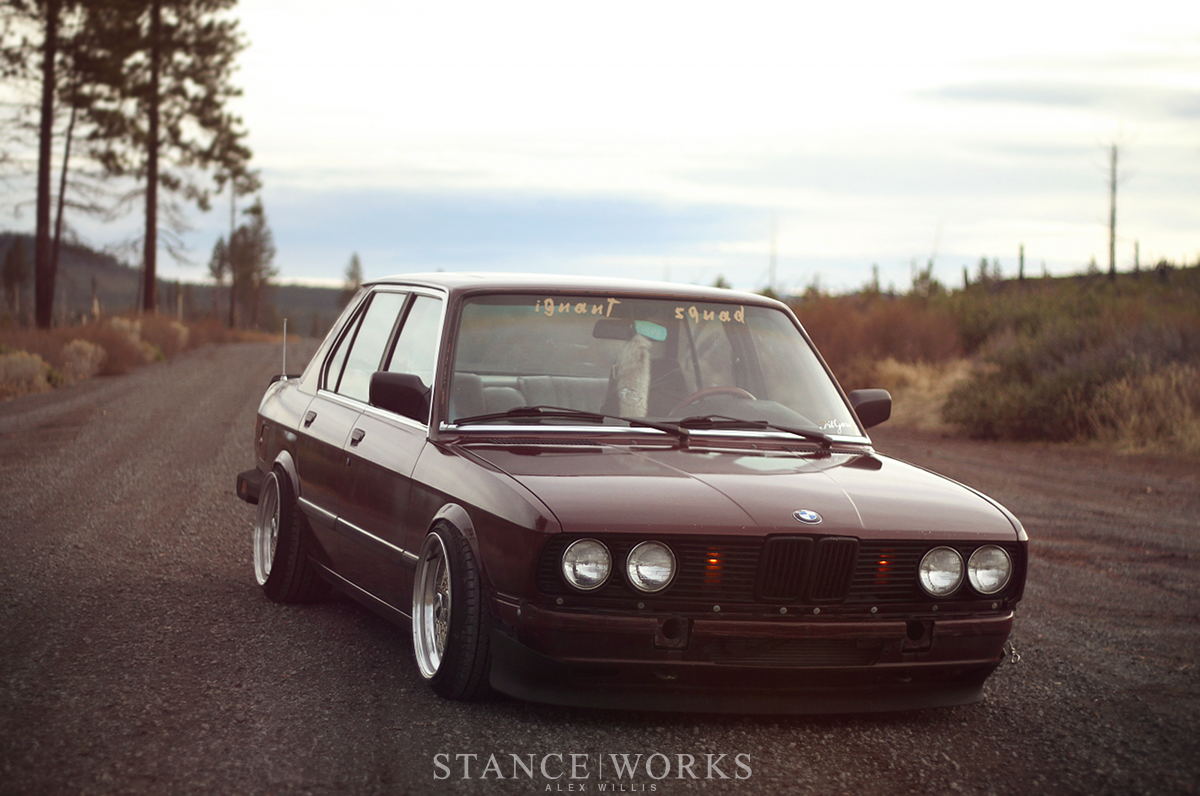 When I first met Alex, he was just a kid with a Mojave Beige MK4 GTI, a knack for photography, and an obvious passion for cars.  Learning as he went, adding coilovers, wheels, and even bodywork, the MK4 could have either broken him or solidified this love of working on cars.  But of course, in the way that so many car nuts find, it seemed only to grow his obsession.  Only weeks after the MK4 seemed complete, with fresh paint and a solid stance, the "RWD bug" bit hard.  Alex got sucked into the drifting world and picked up an S13 coupe.  It quickly transformed from a clapped-out drift car into a clean and fitted daily driver.  Naturally, owning a suspension and tire shop meant that I soon got to know Alex very well.  He became a normal fixture around The FitGarage; helping out, absorbing everything he could, and enthusiastically sharing anything he had learned with others. 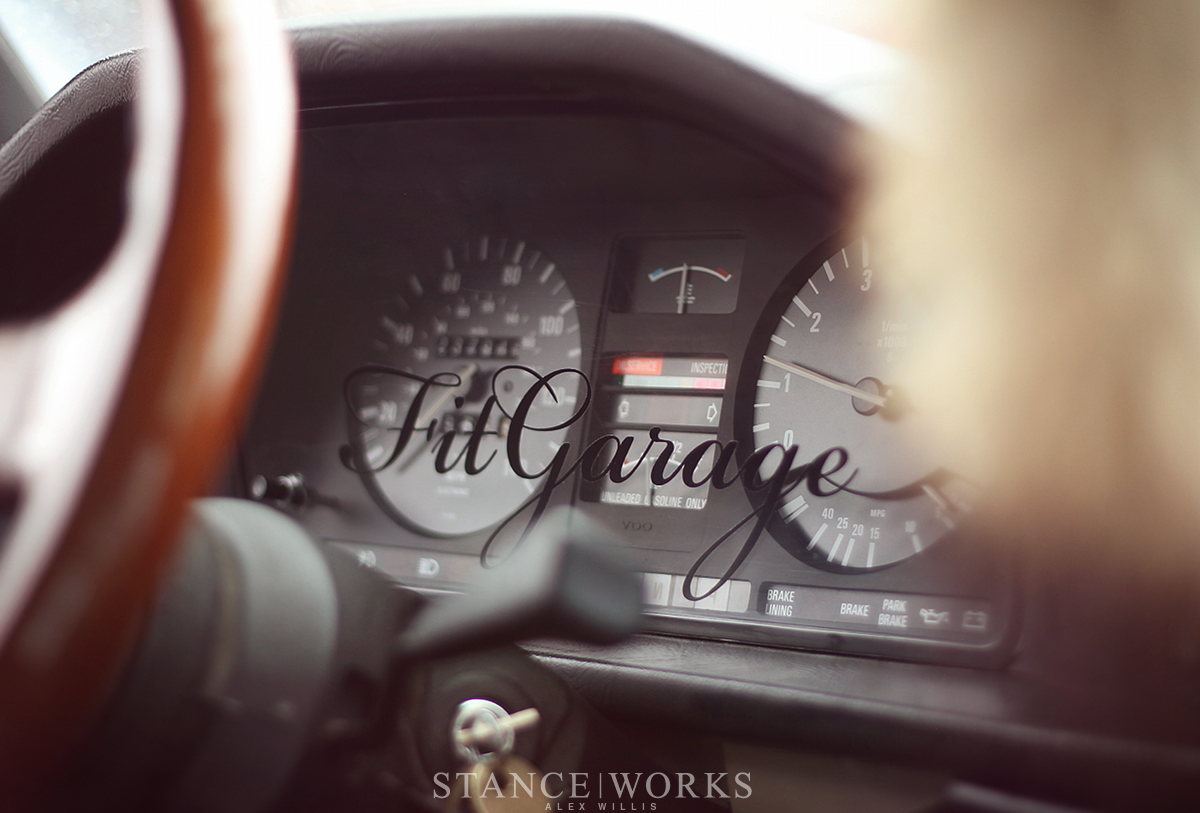 It was soon clear to see: when it came to Alex’s cars, the defining factor was that he always kept it fun.  He does what he wants, making sure he always has a smile on his face getting into and out of his car.  He has an eclectic mix of style that borders spray painted ghetto at one end, and gold plated class at the other. 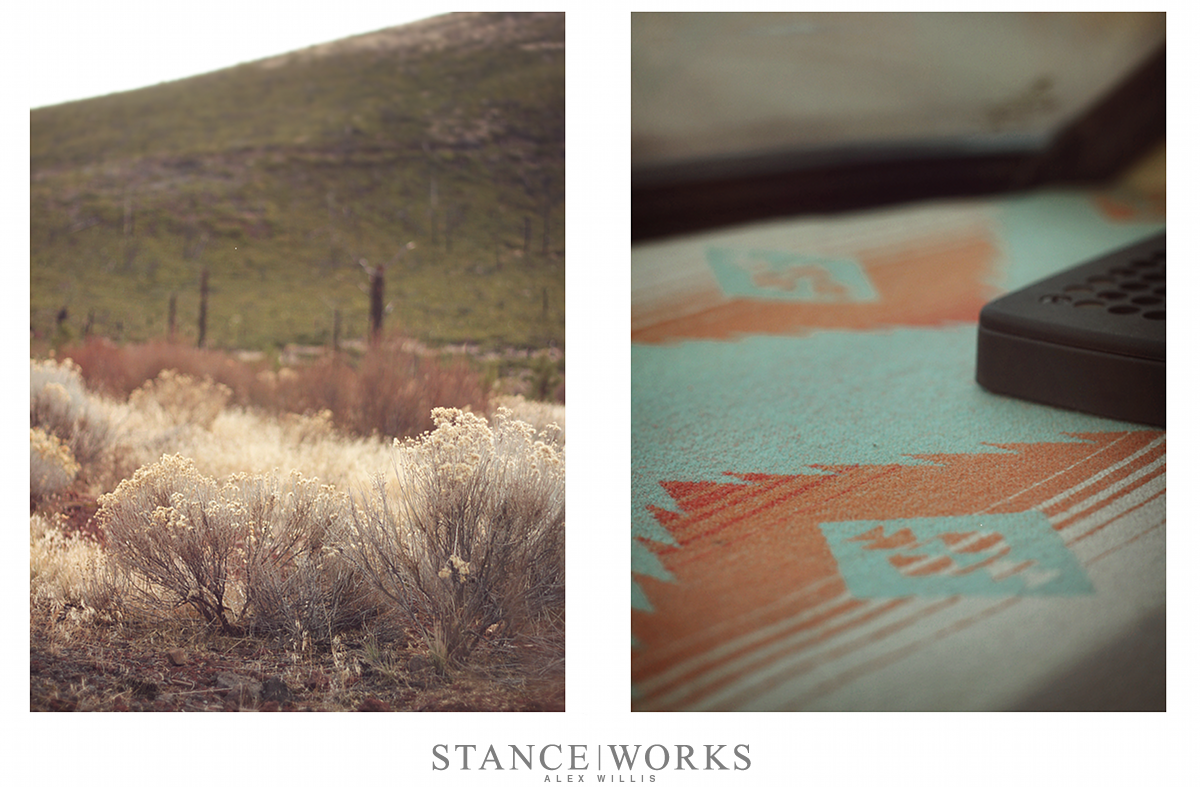 Take his current car for example, the 1984 528e you see before you.  Mostly at the hands of Alex himself, and a dash of his friends help along the way, this car has transformed into a personal reflection of his style.  It’s a true story of bargains as well. The car started with some spring cutting and borrowed 17” Borbet Type E’s from a buddy’s 733i that was slated for the crusher.  Soon after, a set of 17x9 M "roadstar" wheels filled the arches. 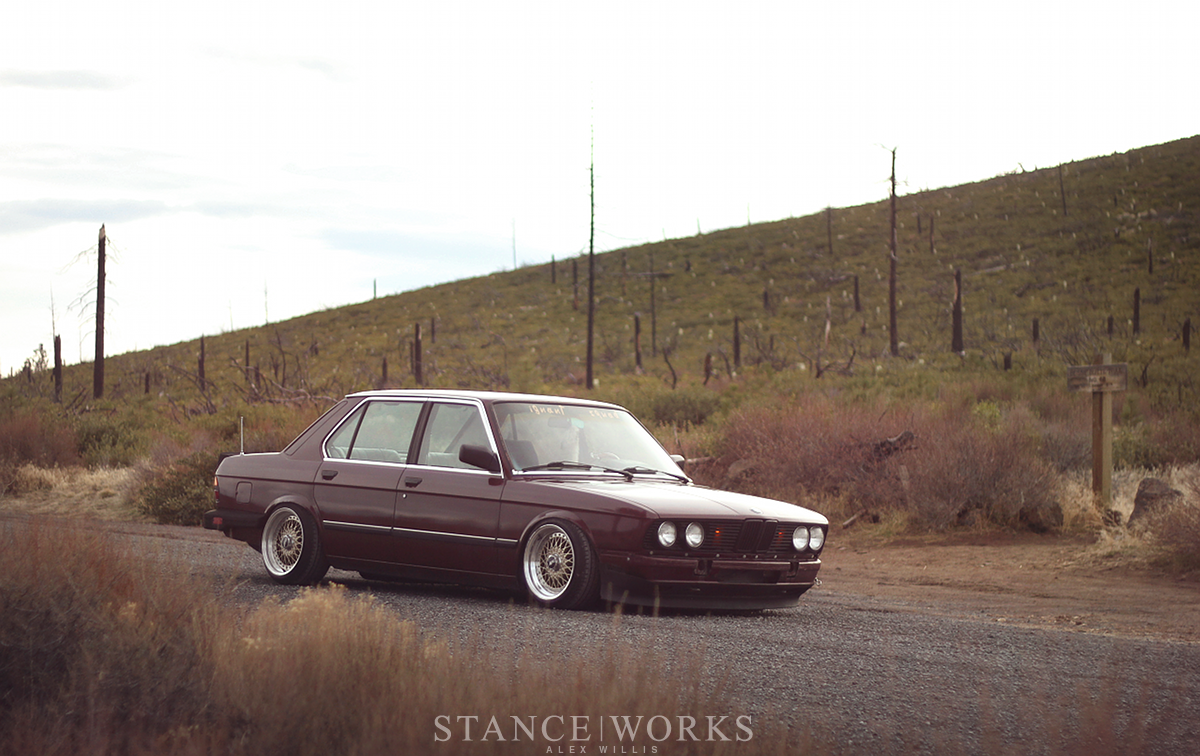 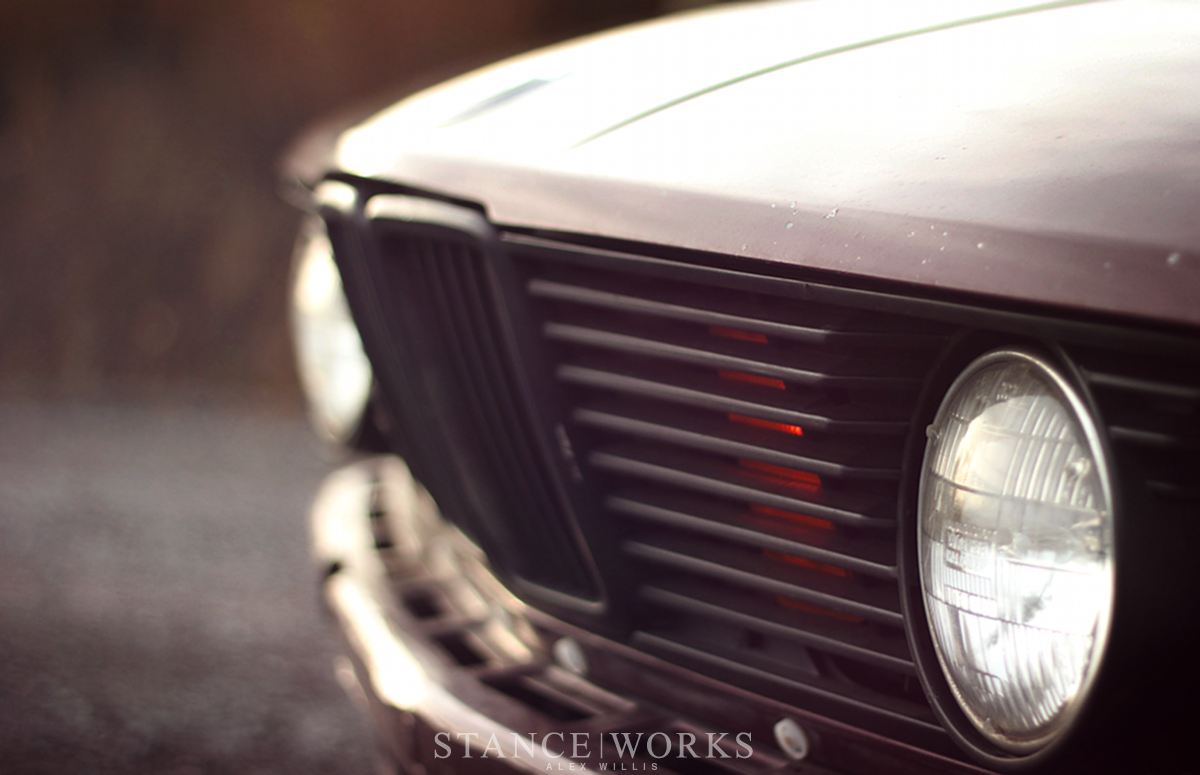 The next phase was controversial; one in which many in the community learned to either love or hate.  A friend clued him in to a deal on craigslist for a set of 14x9 ET0 Centerline style wheels. Previously mounted on a 1964 GTO, the wheels were stuffed under the car and wrapped in some beefy 185/60’s.  With such wide wheels, Alex had to get to work on the suspension to dial in the perfect ride height.  With limited suspension options, and a limited budget, he stuck with cut Bavarian Autosport springs up front, and built custom adjustable coilovers for the rear. 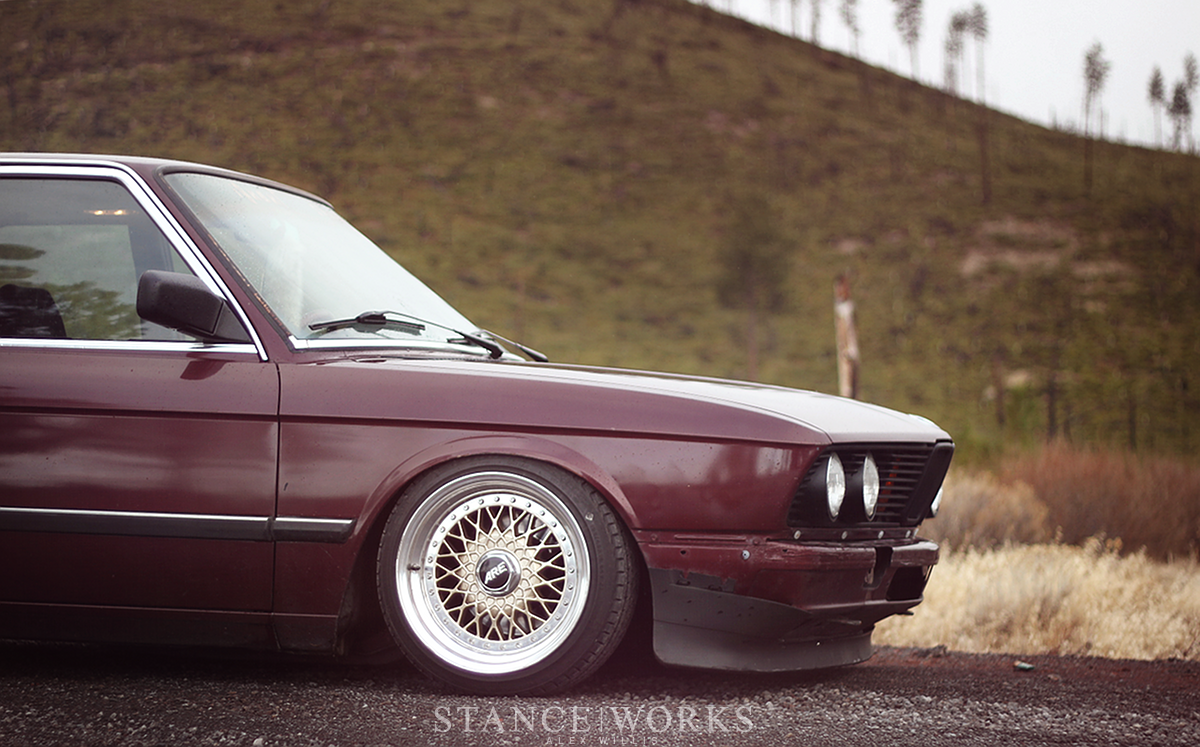 The tired m20, showing its age, wasn’t enough.  Alex grabbed the M30B34 and transmission out of the same 733i mentioned earlier, for a lofty $100. Not happy with just throwing the motor in, he started on the task of shaving the bay, deleting everything he could. 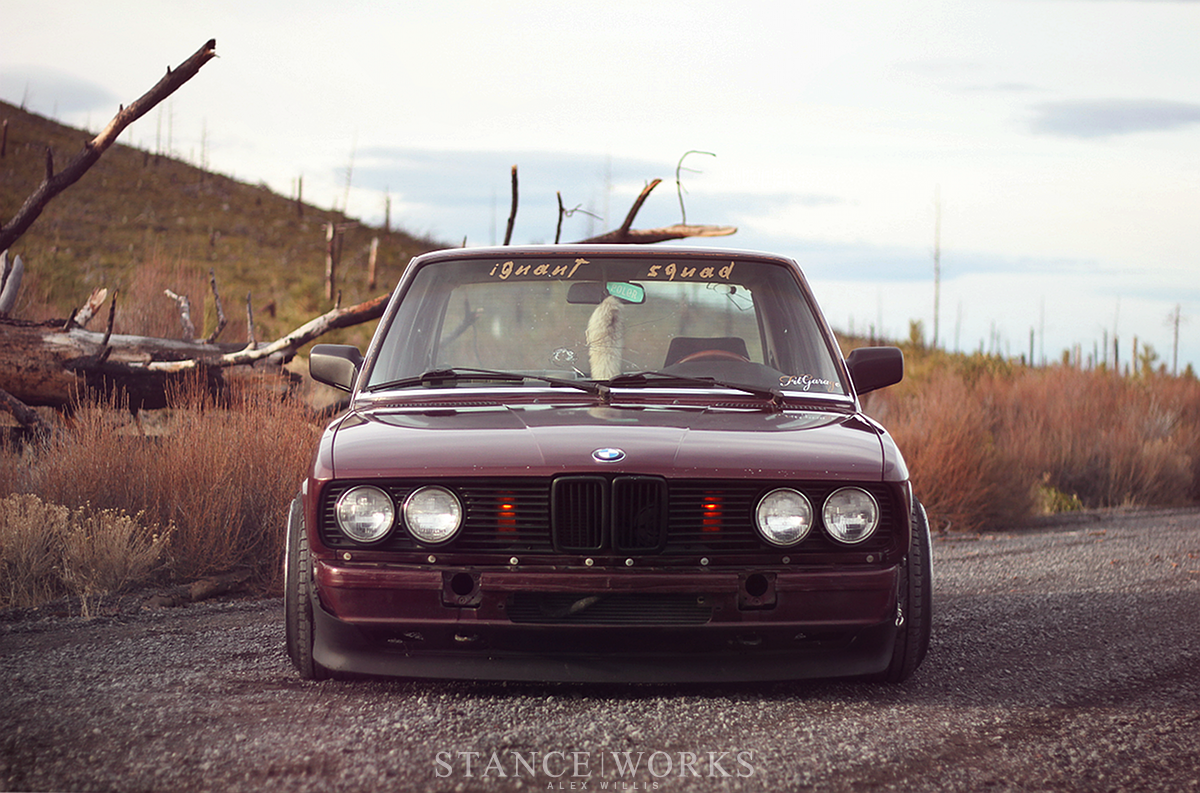 An ECU and harness from an 89 535is were extended and tucked.  The fuse-box was relocated under the dash and the A/C, cruise control, and emissions were all deleted along the way.  With no personal garage, Alex had no choice but to complete all of this in the cold Central Oregon spring weather, outside, in the parking lot of our shop.  A set of wrapped BavAuto headers were added, and the valve cover, pulleys, and fuel rail were powder coated Alex’ favorite color.  Before the motor went in, weeks were spent shaving and smoothing every bracket and line in the bay until finally, the car was brought inside to hit the bay with a few coats of gold! 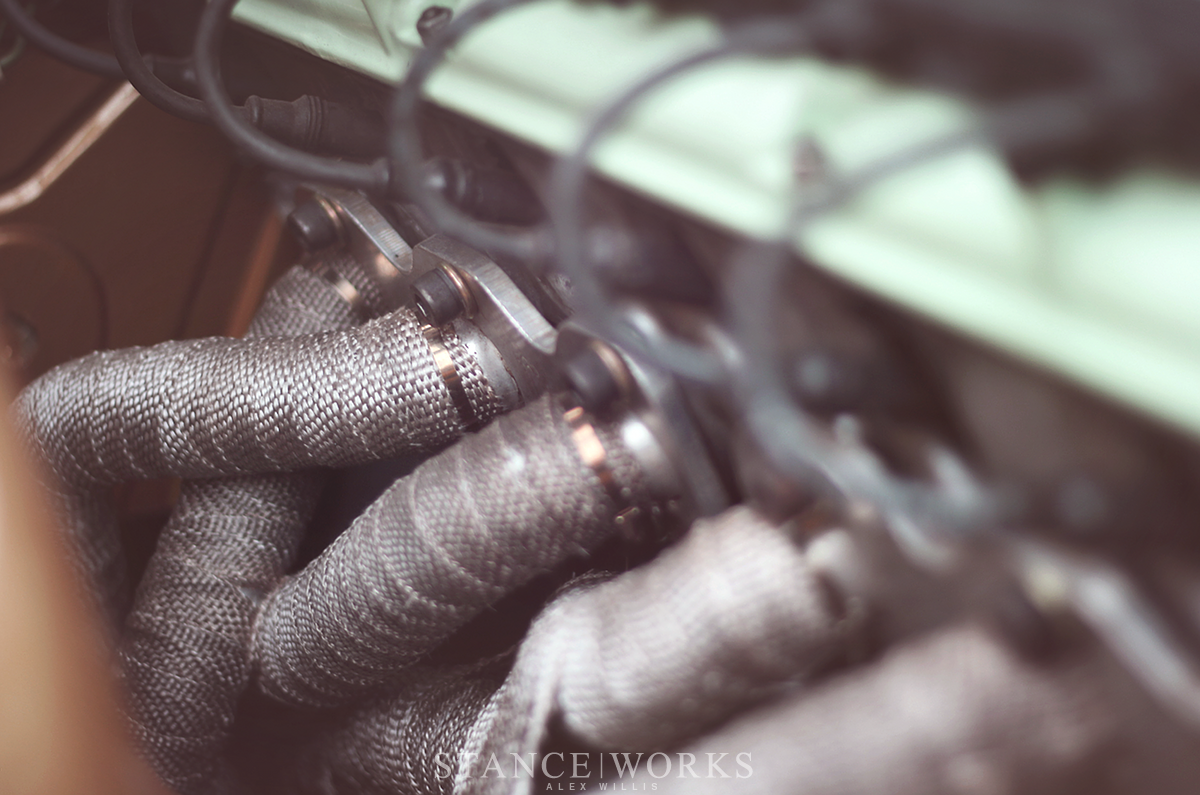 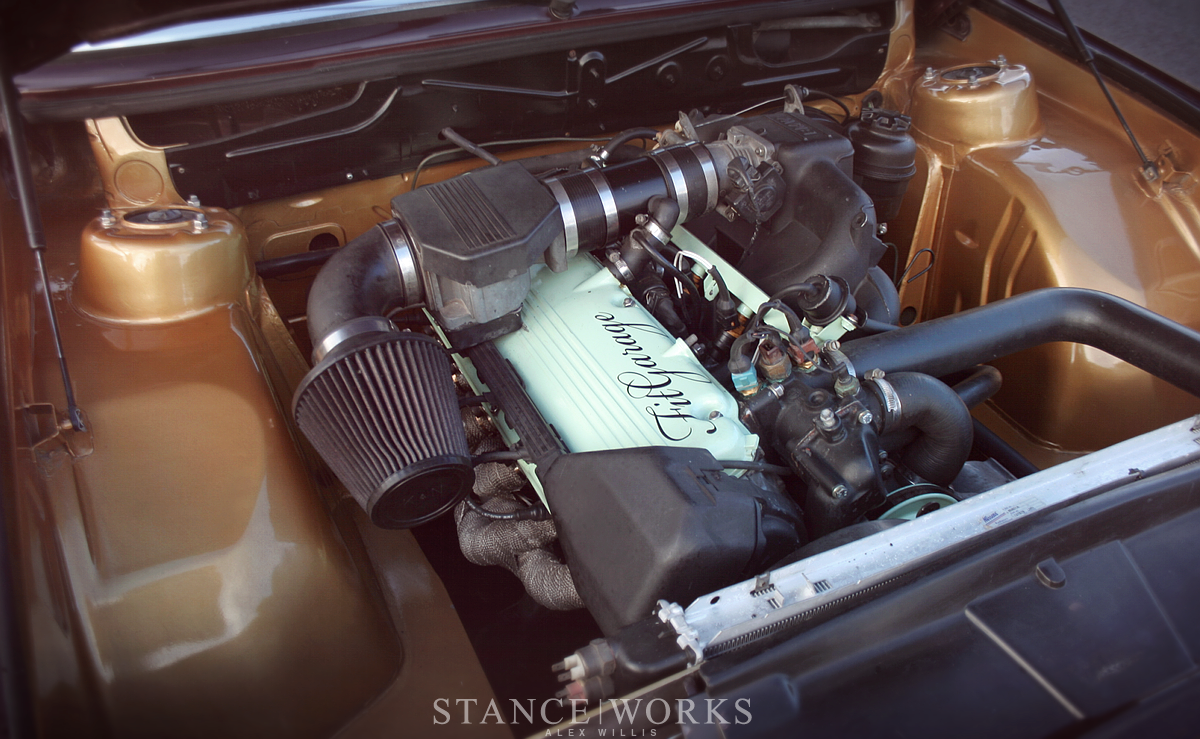 Once up and running, the exterior was next.  The pieced-together theme of thriftily found parts continues throughout.  A retrofitted front lip from a Jaguar xj6 is mounted to the front, and a friend was generous enough to donate a mint Zender wing for the trunk-lid.  The headers are connected to an in-your-face boso style exhaust welded up by a good friend.  This throwback to his love of vintage Japanese cars somehow stays subtle enough to match the aggressive European styling of the car. 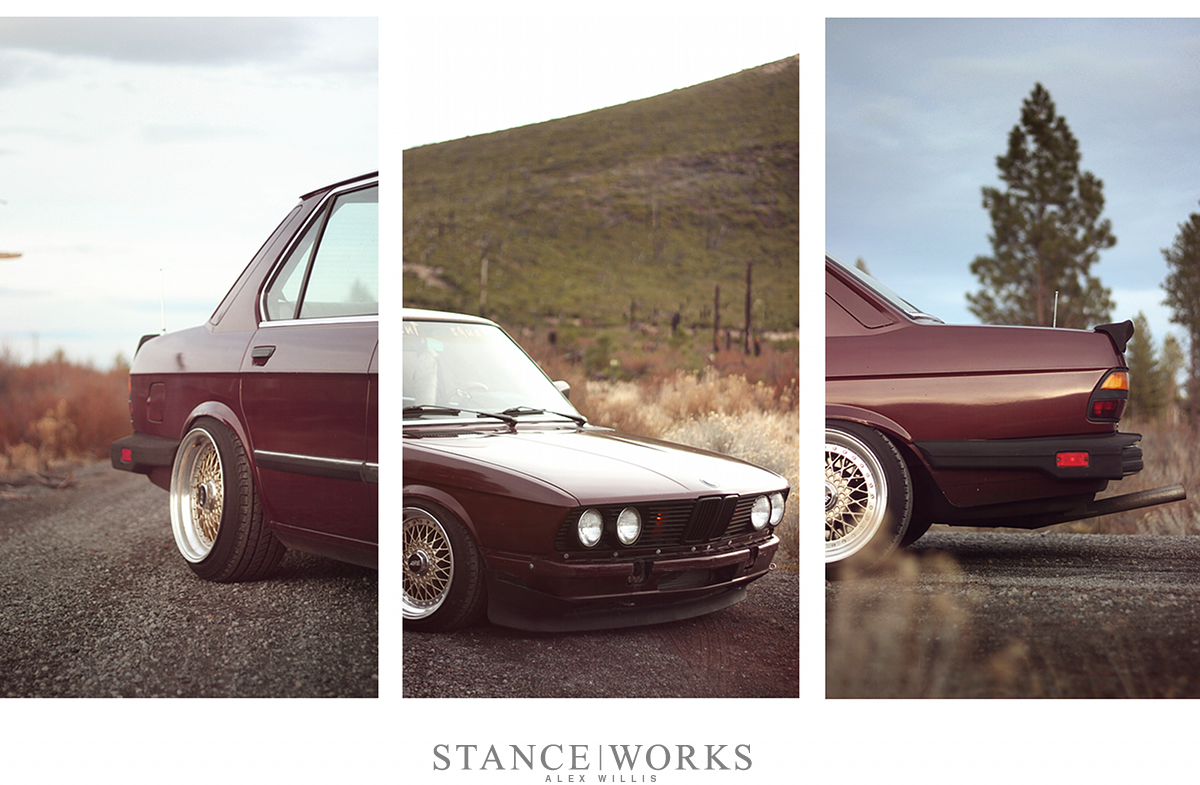 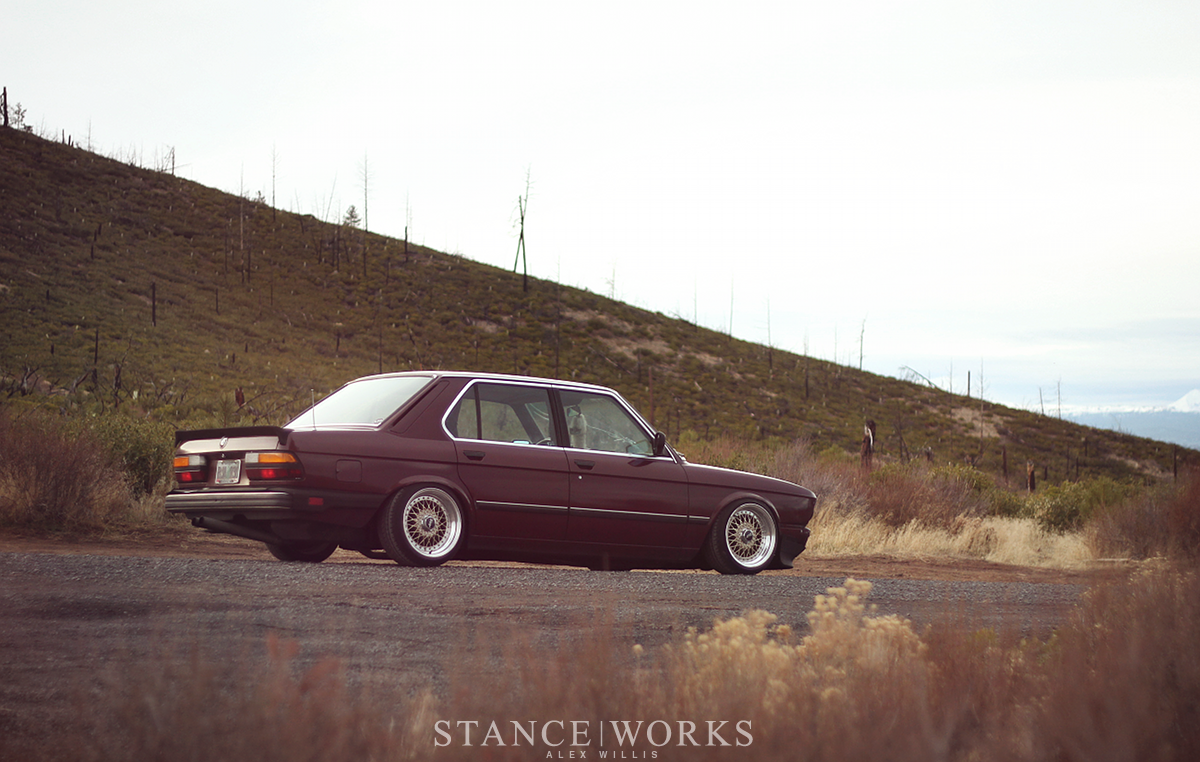 That of course brings us to the most striking feature of this car: The way it sits.  The 14’s were ditched for yet another diamond-in-the-rough find, a set of ARE 398s in 16x9.5, ET35.  Acquired thanks to a trade for a second set of centerlines Alex had been hanging on to the AREs for a rainy day.  Once some spacers and 195/45’s were acquired, the wheels filled the e28’s fenders perfectly. 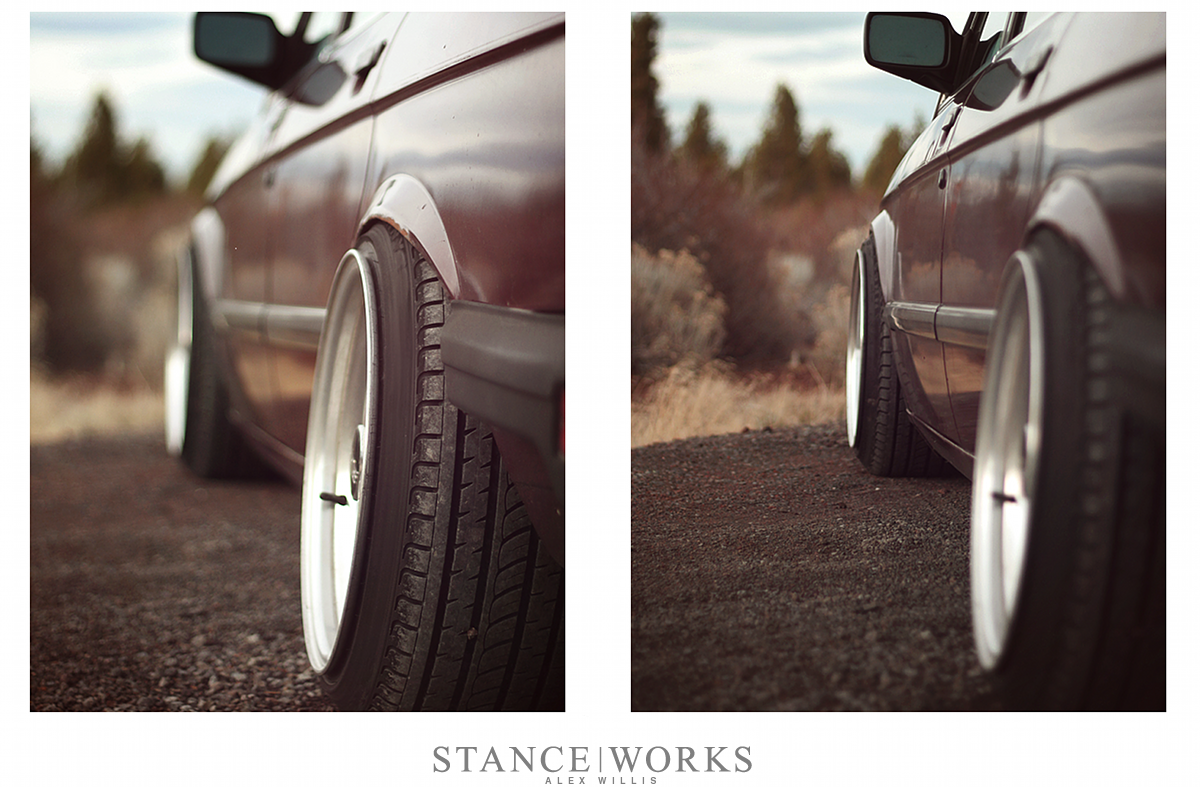 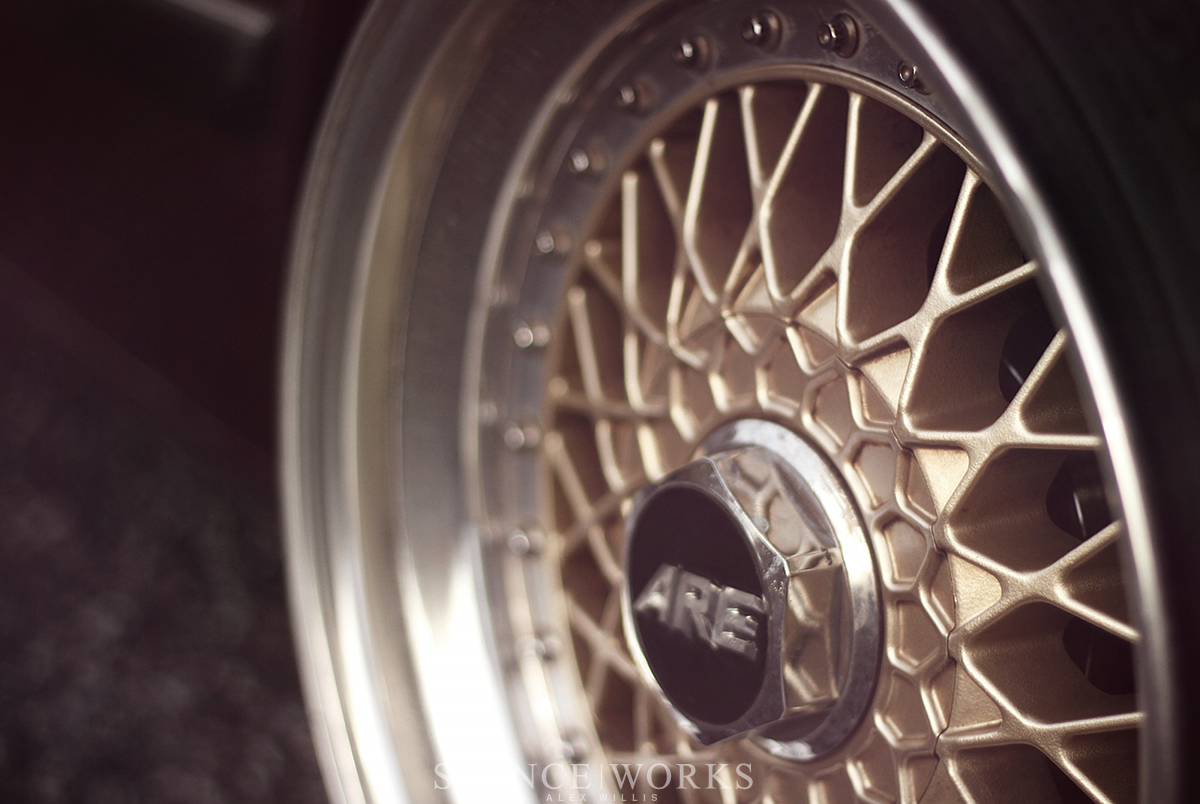 Inside, Alex’s crafty, pieced-together mentality really takes hold. A pair of Corbeau GTS II seats found on craigslist for, you guessed it, $100, a vintage wood-grain Nardi wheel, and a leather wrapped shift knob (found on the floor of a pickup in a junkyard) round out the main features. While personal touches like a vintage leather clip holster serving as an Iphone holder, visors from a W124 Mercedes and a Pendleton fabric covered rear parcel tray finish the interior to Alex’ aesthetic. 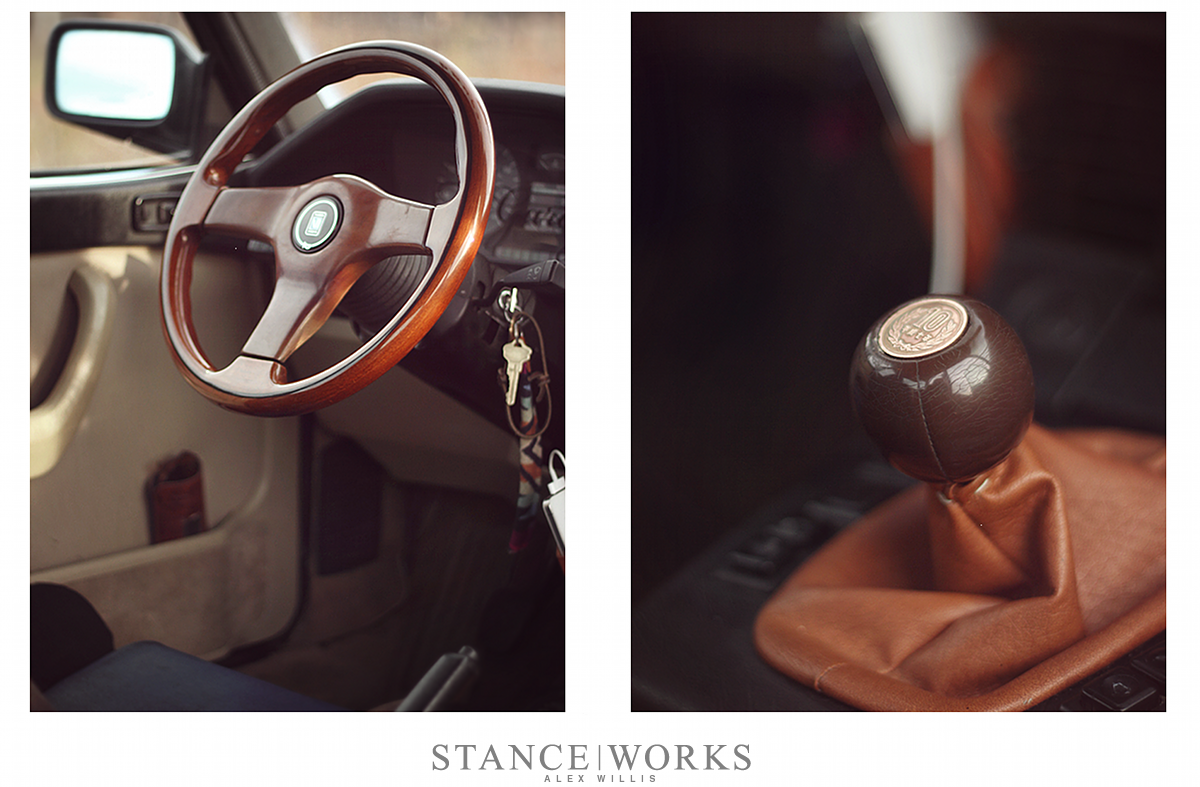 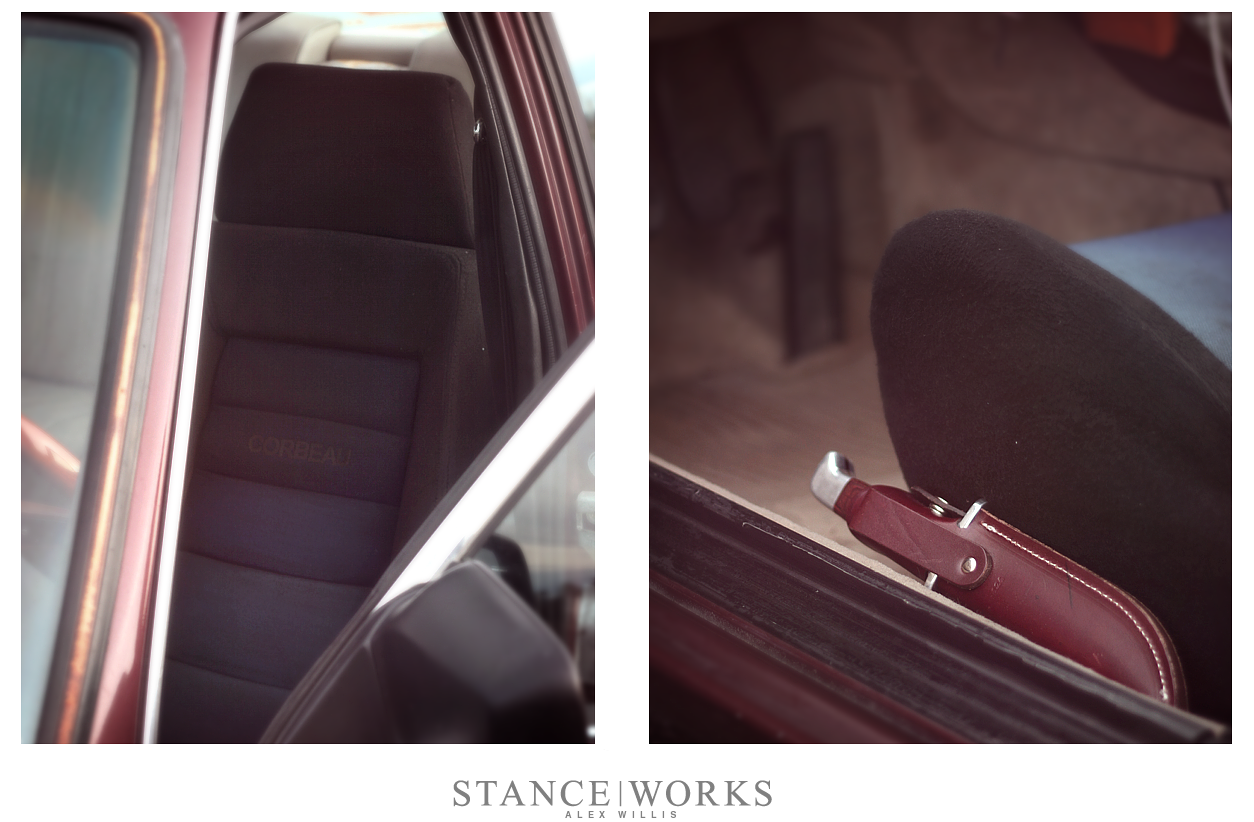 Unlike previous cars, there are no intentions of ever getting rid of this one, with future plans including an m30b35 swap, euro bumpers and coilovers.  The car is driven every day, leaving a smile on Alex’s face wherever it takes him.  But he’ll be the first to tell you, this car is far from perfect.  It has more then it’s fare share of imperfections.  The fenders are beat and burnt from way too much rubbing, the windshield has become intimate with a baseball and the paint is so-so at best.  This is no show car: it’s a daily driver cobbled together with a mess of leftovers, junkyard parts, and cheap Craigslist scores. The simple fact that you’re reading this article, featured on the front page of Stanceworks is almost laughable.  But again, that’s part of it.  That’s what makes this car special.  It’s fun, and isn’t that why we’re all here anyways? 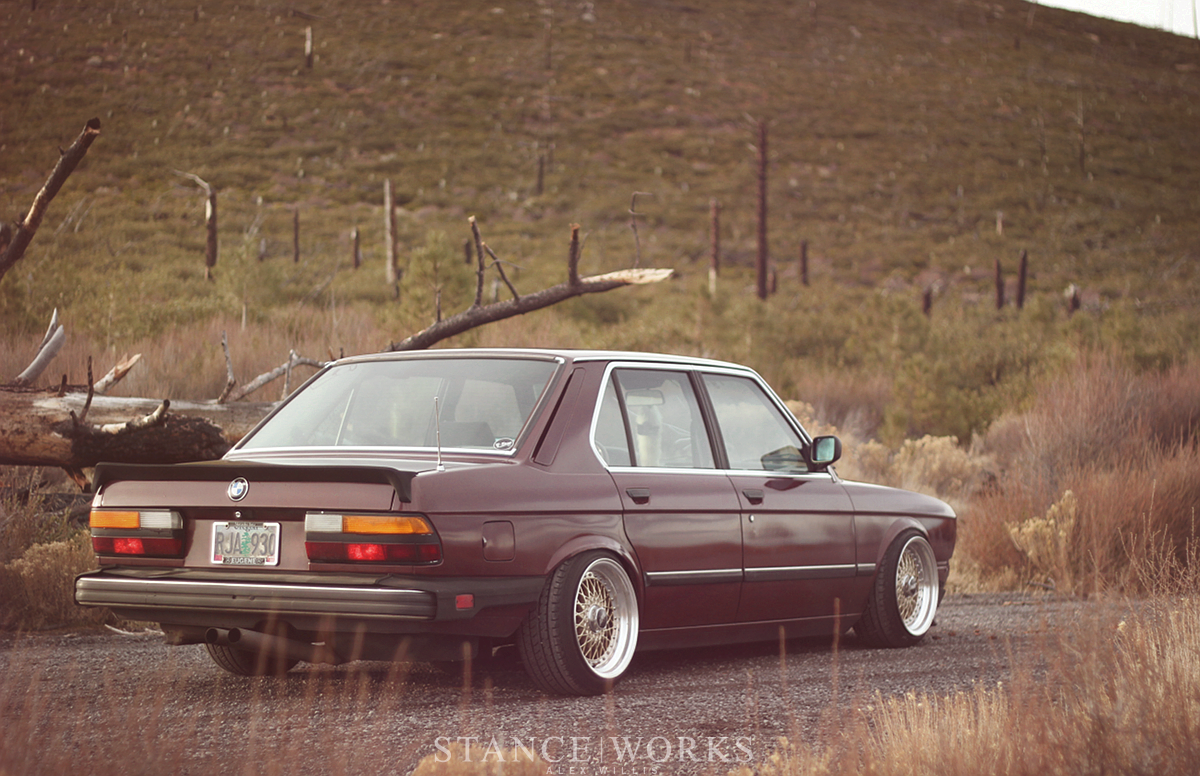