The One We Said Not To Forget

The One We Said Not To Forget

For every chassis, there's one car that leads the pack. When it comes to E28s, most would consider Austin Driggers's red 535i to be the cleanest, best executed E28 around. And I'd have to agree. 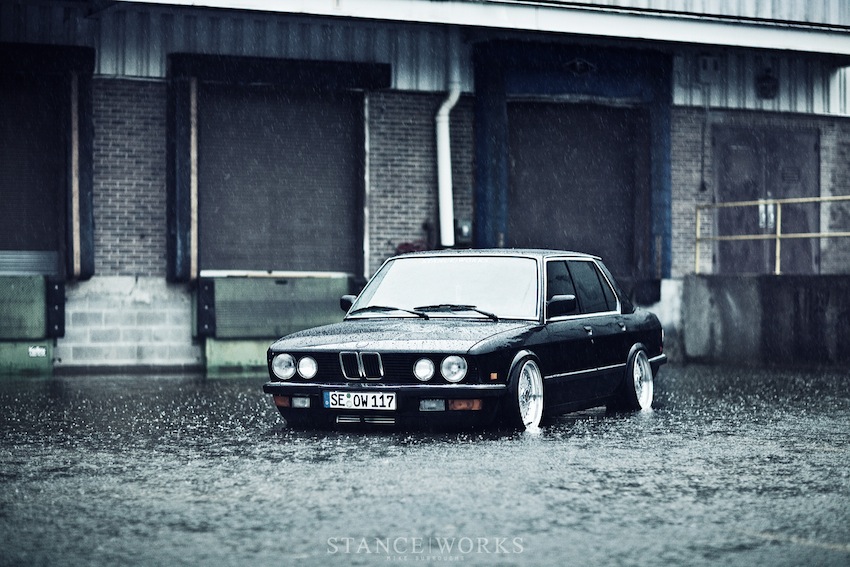 Jeremy Whittle has decided to take the crown and leave no room for the competition. Once E28 owners realize they're going up against a fitted and swapped E28, the game changes quite a bit. I'm not sure I've ever seen static fitment so close, and with 300whp on tap, I can't help but wonder where I went wrong. 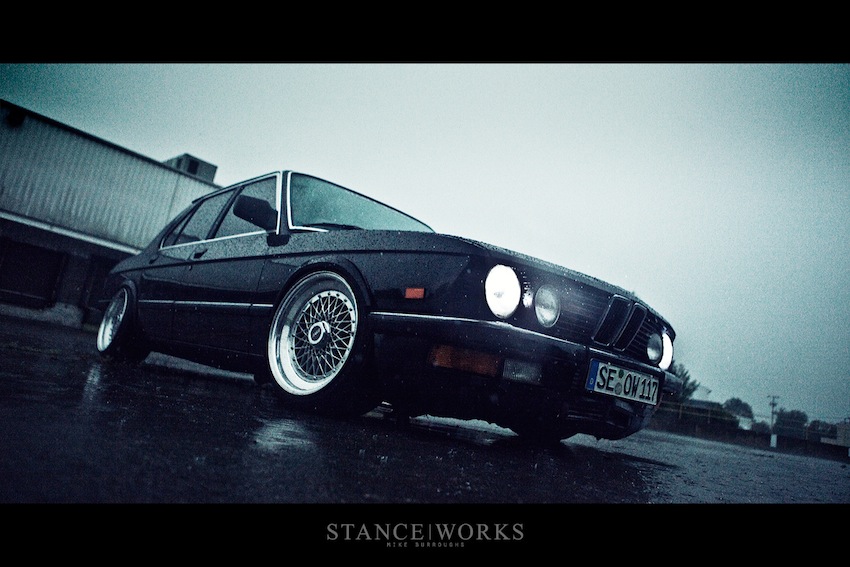 There's a chance you might recognize this car. It was featured exactly a year ago after receiving some AC-Schnitzer Type 1s and a healthy drop. If you remember it, then you'll also remember that this car is a euro import. The bumpers and front end are 100% original, no wanna-be swap here. Jeremy's 525e comes from the motherland, German instruments and all. But those tidbits are about the only thing left untouched since the last time anyone has seen this car. The most important thing is obviously the addition of some beautiful vintage HRE 501s in a square 17x10 et +35 setup. 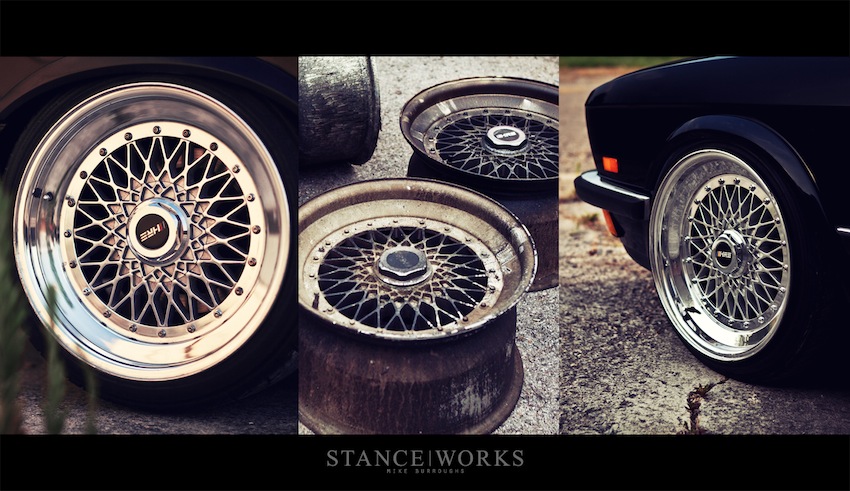 There's something slightly special about these wheels though. As you can see, they didn't start out with the beautiful shine they have now. These wheels were in the garage fire I lost my own car to... and not wanting to undertake the effort of bringing them back to life, Jeremy decided to take them off my hands. Here's where things get remarkable though. Jeremy refinished the set entirely by hand. No power tools, no buffers, no special equipment. More than 60 hours were spent sanding to bring the wheels back to their original shine. He sourced new parts and pieces to accompany the repolished faces and lips to literally save a ruined set of wheels. 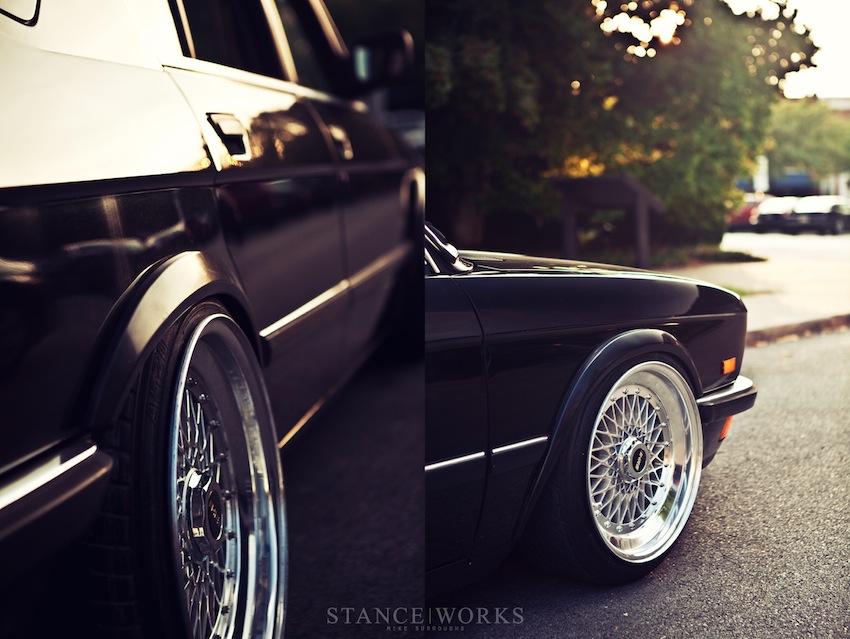 As you can see, they came out flawless. Adaptec built the adapters to bring the wheels gracefully to the edges of the fenders. 17x10 et -1 is the final result and frankly I don't think it could be any better. The pairing of a German car and American wheels is seamless, a match made in heaven.

But the inter-continental coitus doesn't stop there. Beneath the hood lies a Toyota 1JZ-GTE. Twin turbo goodness. That's right... Rusty isn't the only one any more. Jeremy's installation, however, is much cleaner. It's inarguably as close to OEM as it's going to get. To ice the cake? This is Jeremy's only car. There's no "daily driver." On those late nights where the McDonald's Dollar Menu is a necessity, he mosies down the street in this machine. Every time. From the inside, you'd never know it was swapped. The drivability is unmatched, as smooth as the original M20. The fuel economy is spot on as well. 25mpg anyone? 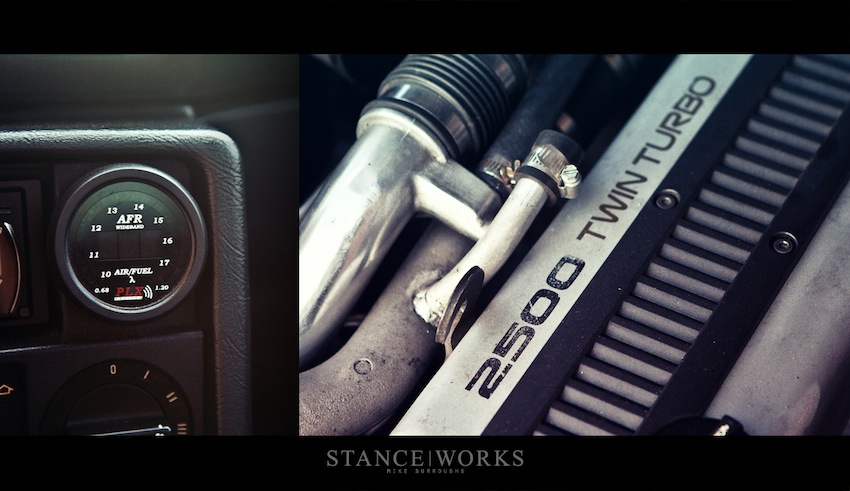 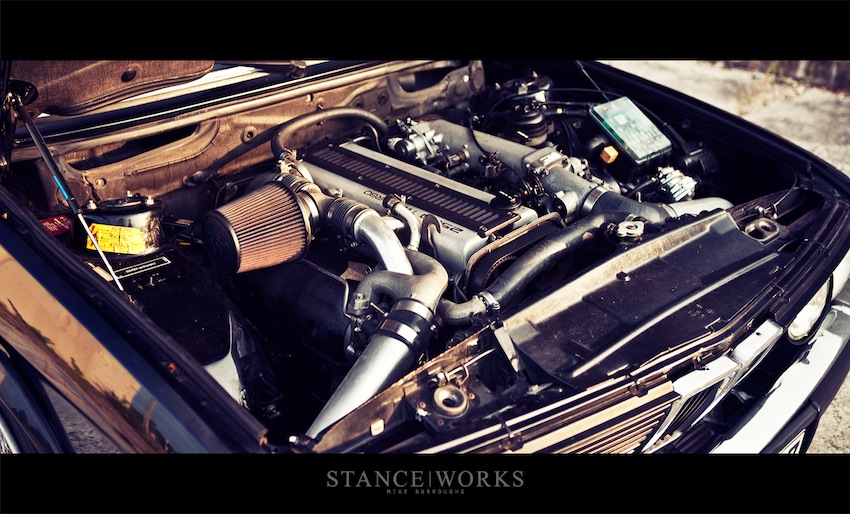 The interior of Jeremy's E28 is a very rare taurusrot leather in very good condition, given that it is 25 years old. It's all original too, retaining that feeling of "I should probably be dressed nicer just to drive this car." 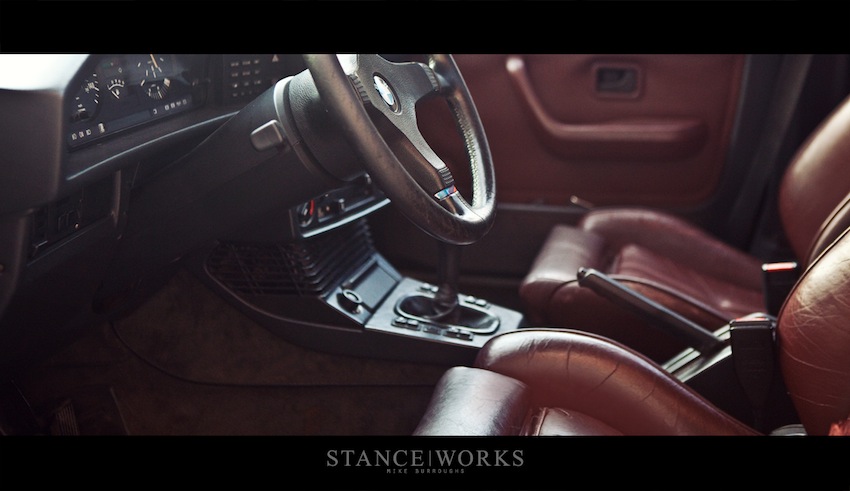 It's not the lowest E28 to ever roam the streets, but the 1JZ's oil pan does hang low. Within 3 days of arriving in Tennessee, Jeremy had decimated his oil pan not once, but twice. "It sucks to roll hard" comes to mind, but "It sucks to have a car this fucking awesome" does too. I'll be honest and say it's the best looking E28 I've seen to date. It oozes class, setting off the original E28 bodylines perfectly. This is without question the E28's maximum potential put to use. 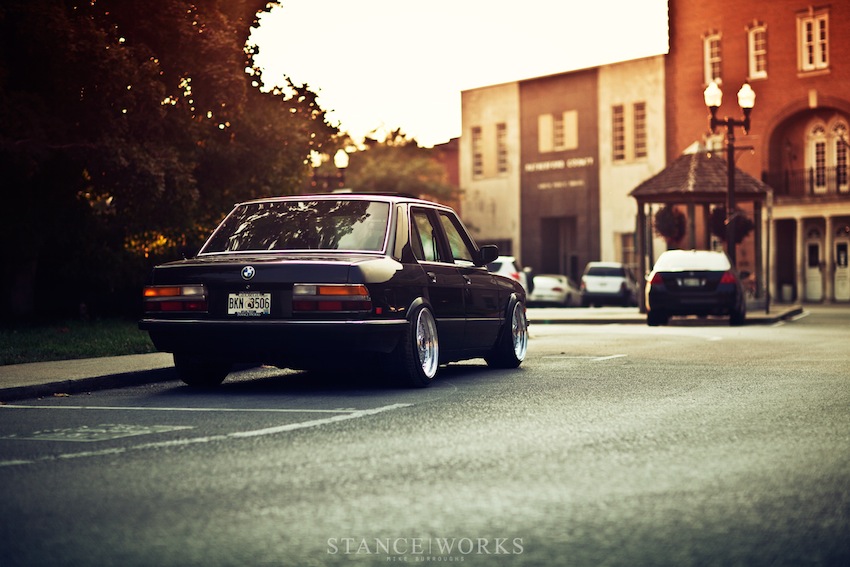 More importantly than the car itself, however, is the owner. Jeremy, as evidenced, has a lot of time, and more importantly, heart, into this car. Jeremy gave up a 2003 BMW Z4 to get his hands dirty on something older. He wanted something with character that begged to be worked on instead of simply driven from point A to point B. Jeremy is well aware that there's more to this game than just looking good. His car has been the embodiment of friendships and hardships alike. If only I could count the number of times this "piece" has been stuck in my driveway needing some type of repair. 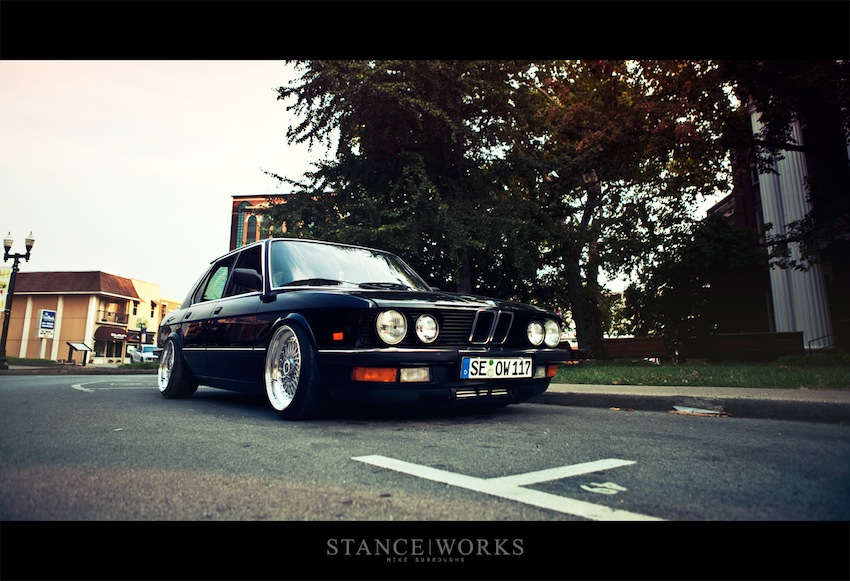 But then again, that's what it's all about, right? We all say cars are an extension of ourselves... but more importantly, cars are an extension of ourselves and our friends. There are few better ways to spend a hot summer night than working on whoever's car happens to be broken this week. To leave the realm of warranties and reliability to dive into something like this takes more than a desire to be featured on the hottest blogs and forums. 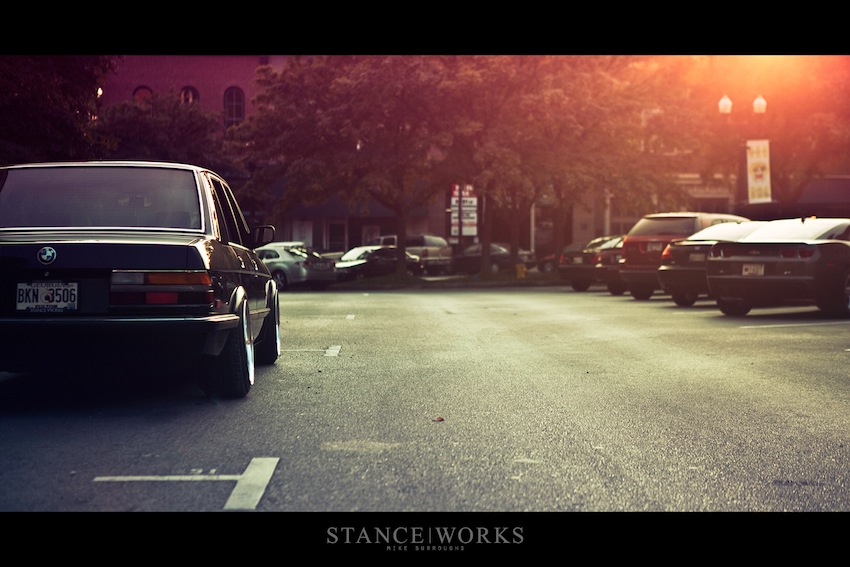 There's no question that it's the community that brought Jeremy here... and it's guys like him that bring us here. Now you'll have to excuse me. His car is still leaking. We've got another oil pan to patch up. 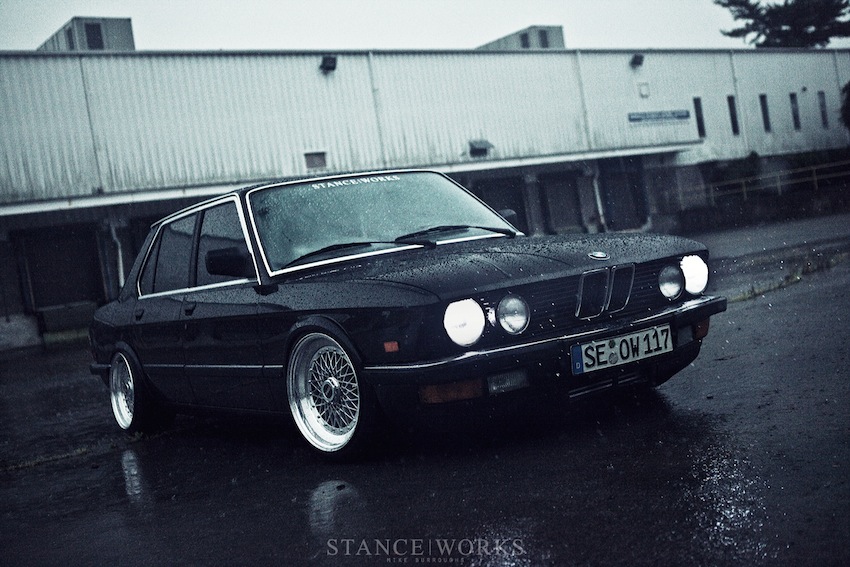 But for what it's worth, rumor has it that Austin is looking to make a comeback.