It has always been important to us to try to bring "exclusive" content to the table. You can't create something relevant and interesting by reposting the exact same content that everyone else is posting. With that being said there are times when we feel a second look is required to do the story justice.

I'd like to introduce you to Ryan Cates and his beautiful 1989 Mazda RX7. You may have read about or seen photos of his car elsewhere but we honestly feel that his story and build is deserving of an in-depth look. Besides, the car is absolutely gorgeous and who wouldn't want to see more of it?

Ryan is no amateur when it comes to building a car. He can recall fondly the early days of import street racing when having a B-series swap in your Honda was a big deal. Before there were stance dedicated blogs you could find Ryan dialing in aggressive wheel setups on various cars he previously owned and building VIP styled cars before they were even popular here in the United States. We can appreciate his diverse and eclectic tastes - after all, most of us are automotive enthusiasts not just stance enthusiasts. 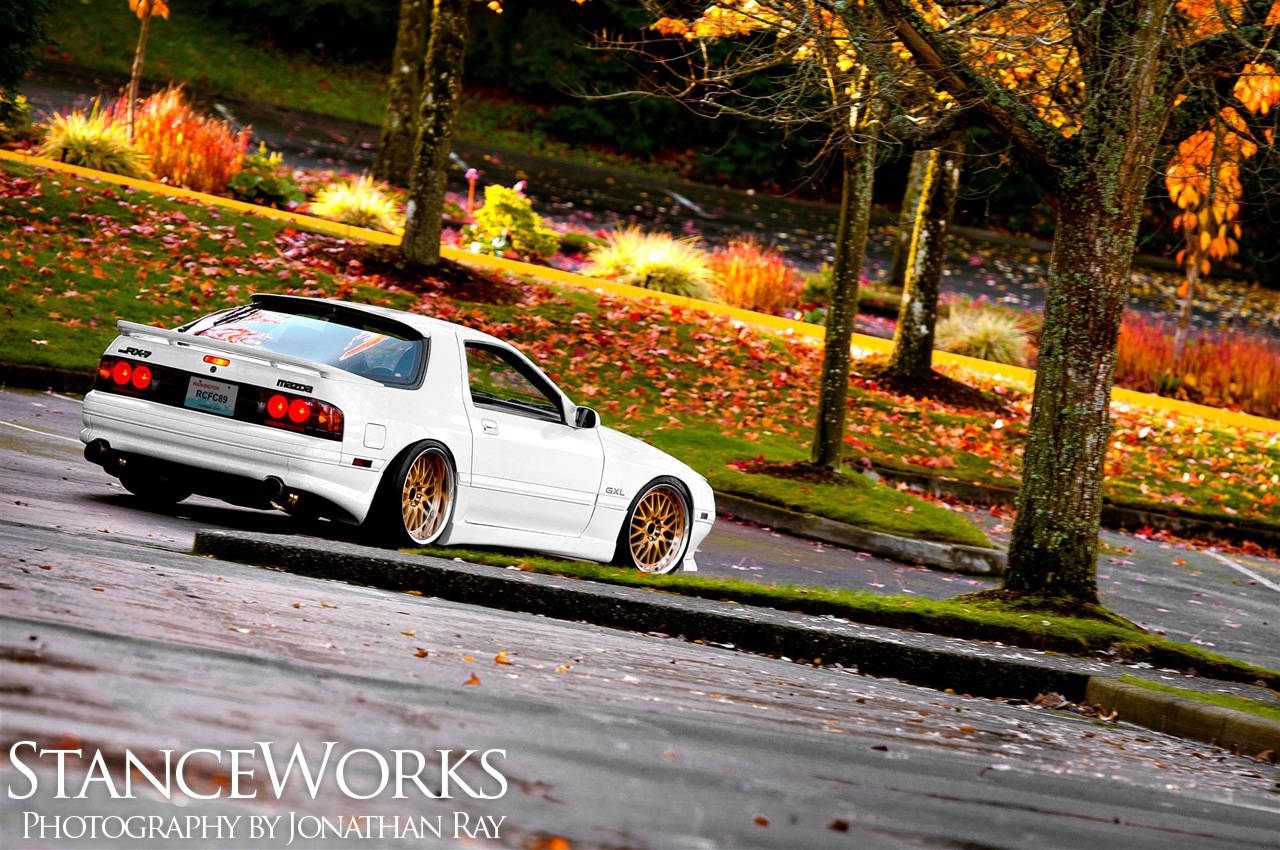 A few years ago Ryan found himself in between projects and wasn't sure what to build.  As time passed, the drifting scene grew extremely popular and many of his friends started building drift cars. Ryan didn't want to hop on the bandwagon just because of the popularity but he definitely found himself appreciating the strong Japanese styling that these cars possessed. He considered building a Nissan but didn't want to do something so common. Eventually his heart was captured by the FC RX7 chassis and he began searching the Washington area for an acceptable car.

Many would have found a cheap shell and jumped into the project head first but Ryan is experienced enough to know that you get what you pay for. He originally looked for a Turbo II but they all seemed beaten and abused. It is difficult to find a car from the '80s in perfect condition but after seven months of searching his patience was rewarded. 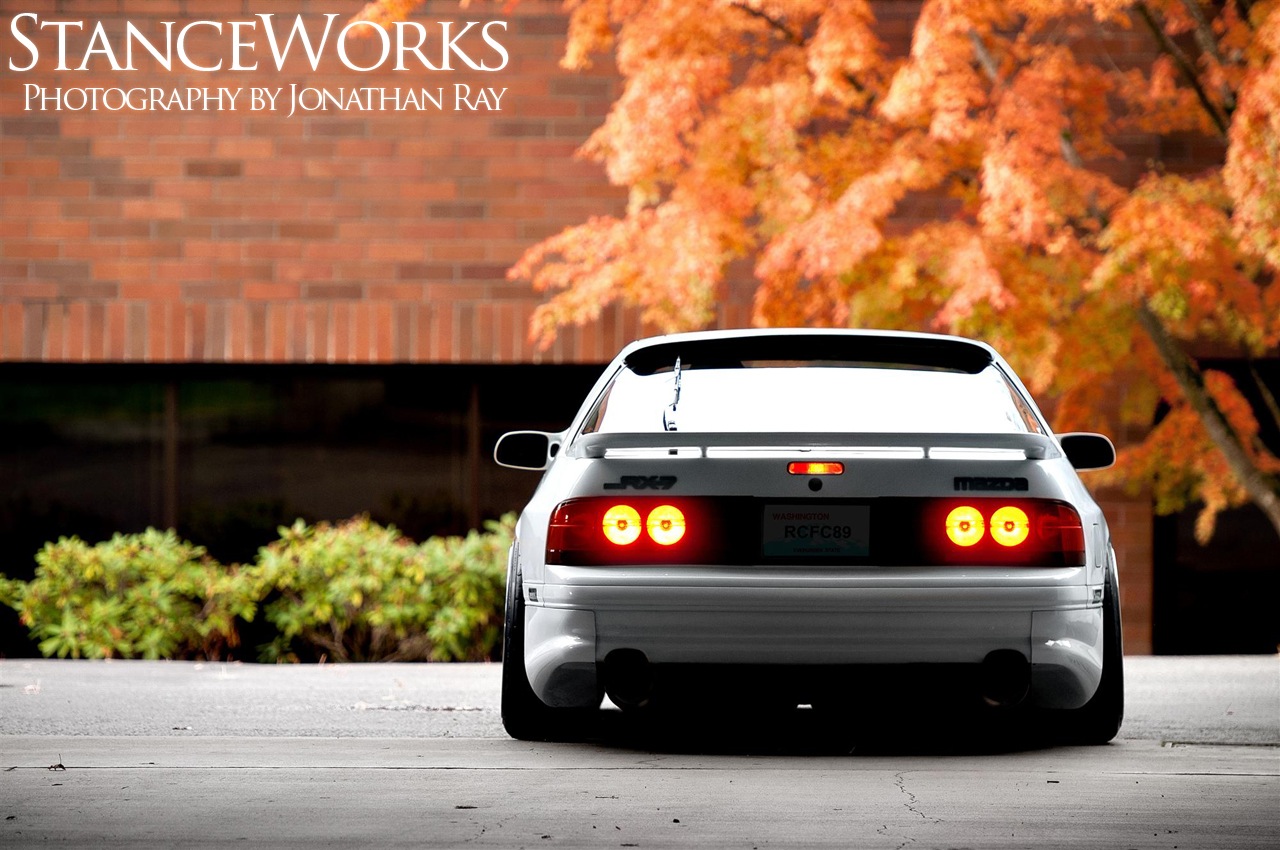 Ryan couldn't believe his eyes when he first stumbled across the car he would later purchase - a 1989 Mazda RX7 GXL. He had been detailing cars for years and had never seen a car this pristine for its age. The car was owned by an older woman who rarely drove it. The chassis mileage was very low and the motor had just recently been rebuilt. While he had come across plenty of decent cars in his search, not a single one was remotely close to the same condition. 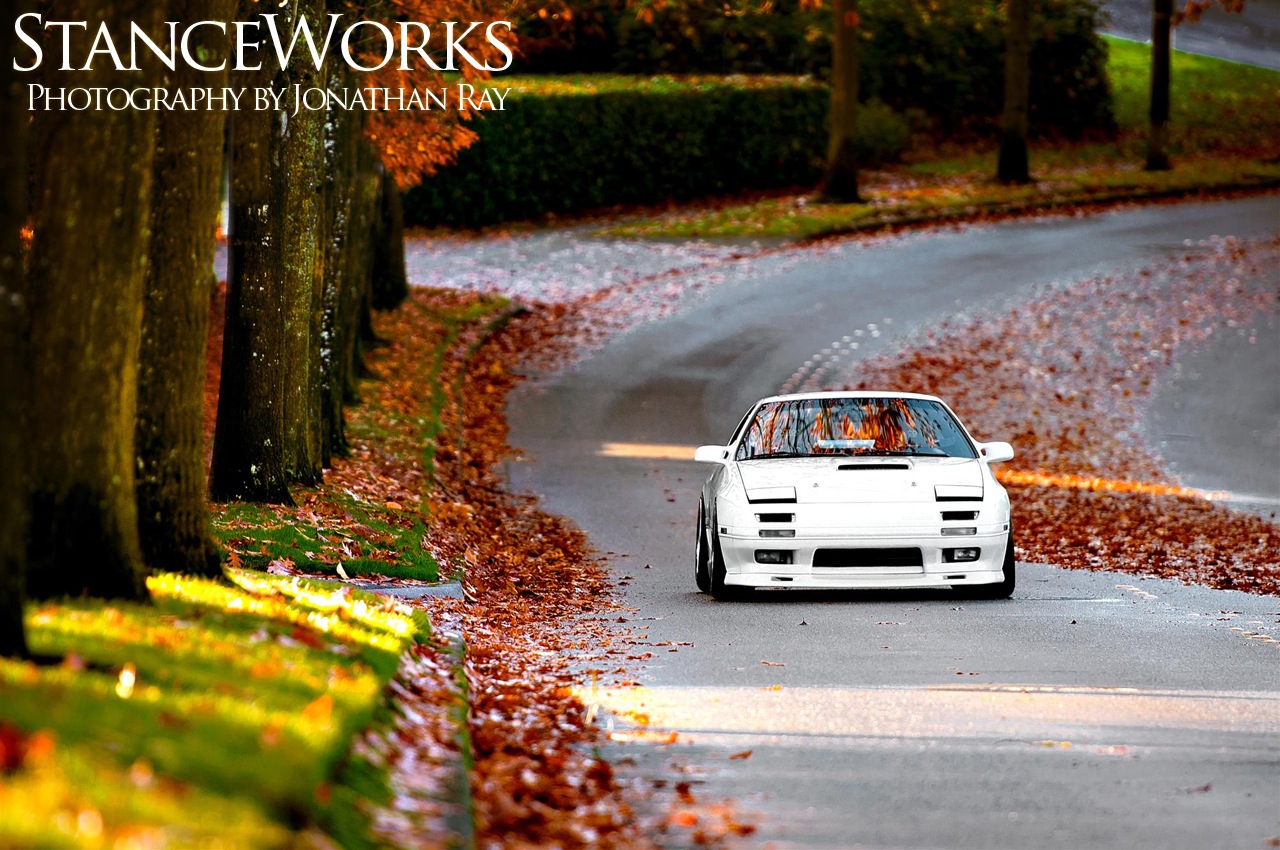 The car didn't remain stock for long. The exterior was fitted with Shine Auto lips, sideskirts, rear end caps, and a roof spoiler along with a hood from a Turbo II model. The tail lights were also modified to match the JDM tails. The end result is a subtle and aggressive enhancement to the vintage lines of the car. Ryan drew from his years of experience as an auto detailer and put immense effort into touching the paint up for a show room quality shine. 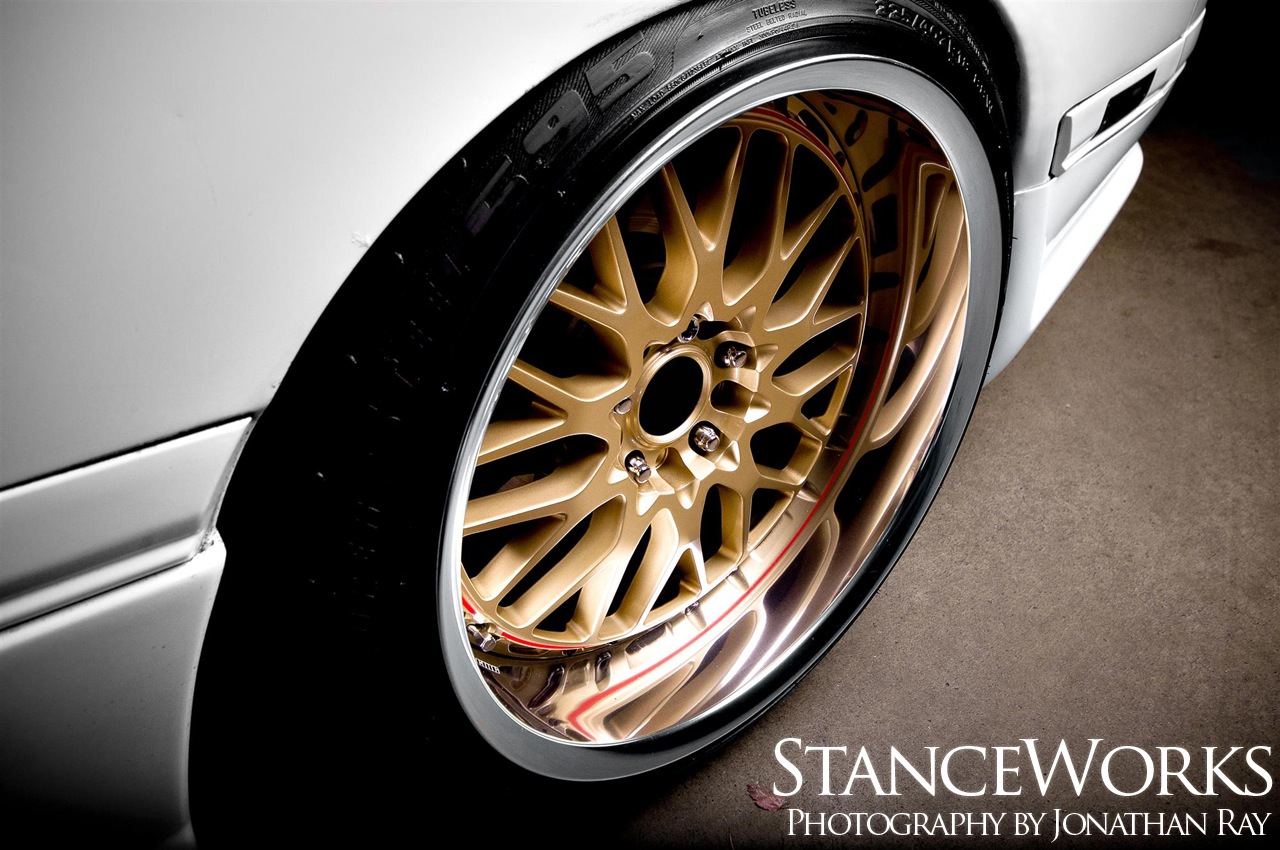 Ryan's goal for wheel fitment was to bring a modern, aggressive setup to the classic styling of the exterior. The only requirement was that the wheels were true to the heritage of the car - only Japanese wheels were considered. He stumbled across these beautiful Volk Racing GTUs (F: 18x9 +17, R: 18x10 +13, +12 and +8 after spacers) that were sourced from a 350Z racecar in Japan. While the price was rather steep, the aesthetics and pristine condition of the wheels made the purchase entirely worth it. 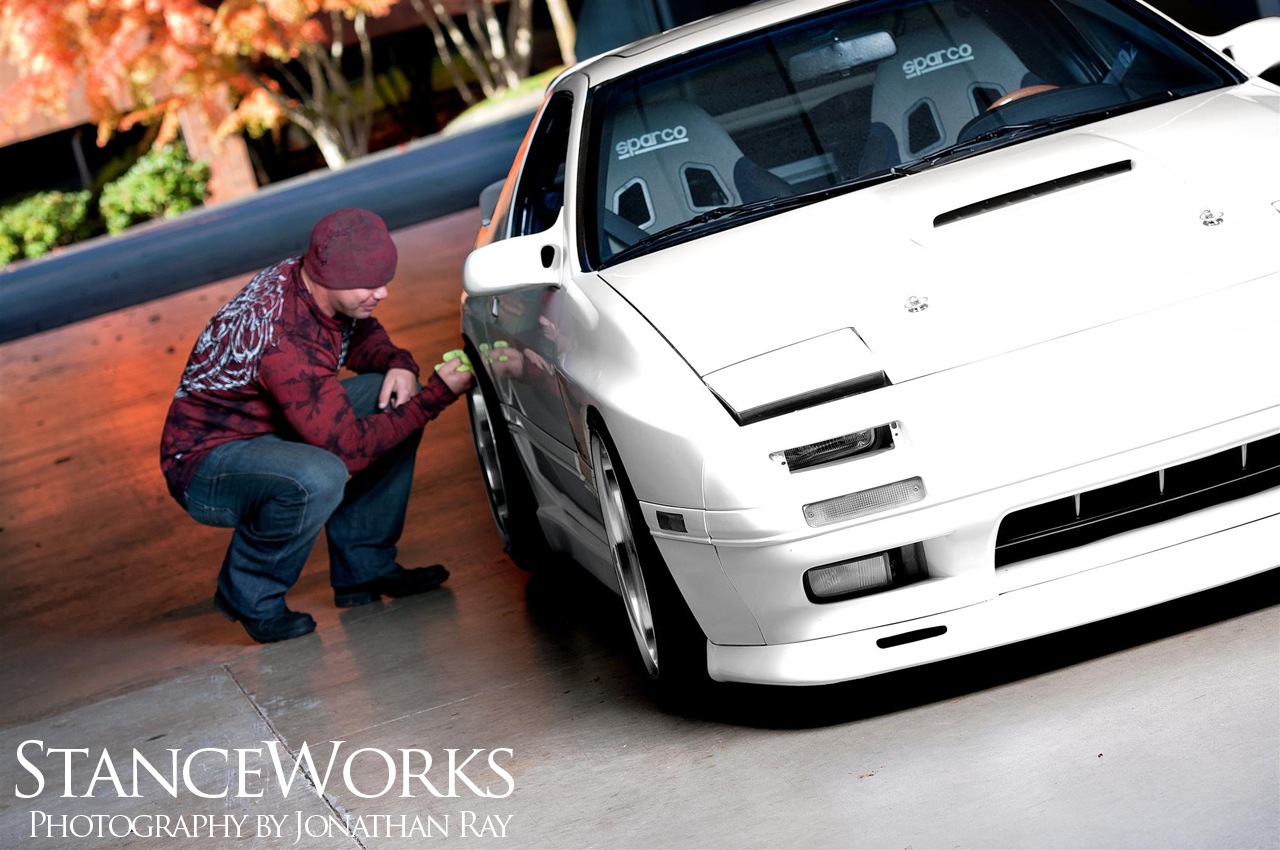 The biggest priority when choosing suspension was finding the proper coilover to allow for the ride height that Ryan was looking for. This wasn't an easy task, but Ryan finally settled on a set of Stance GR+ coilovers for maximum low while retaining the sporty and aggressive handling capabilities of the car. The chassis is also tied together with Cusco strutbars and Racing Beat swaybars. 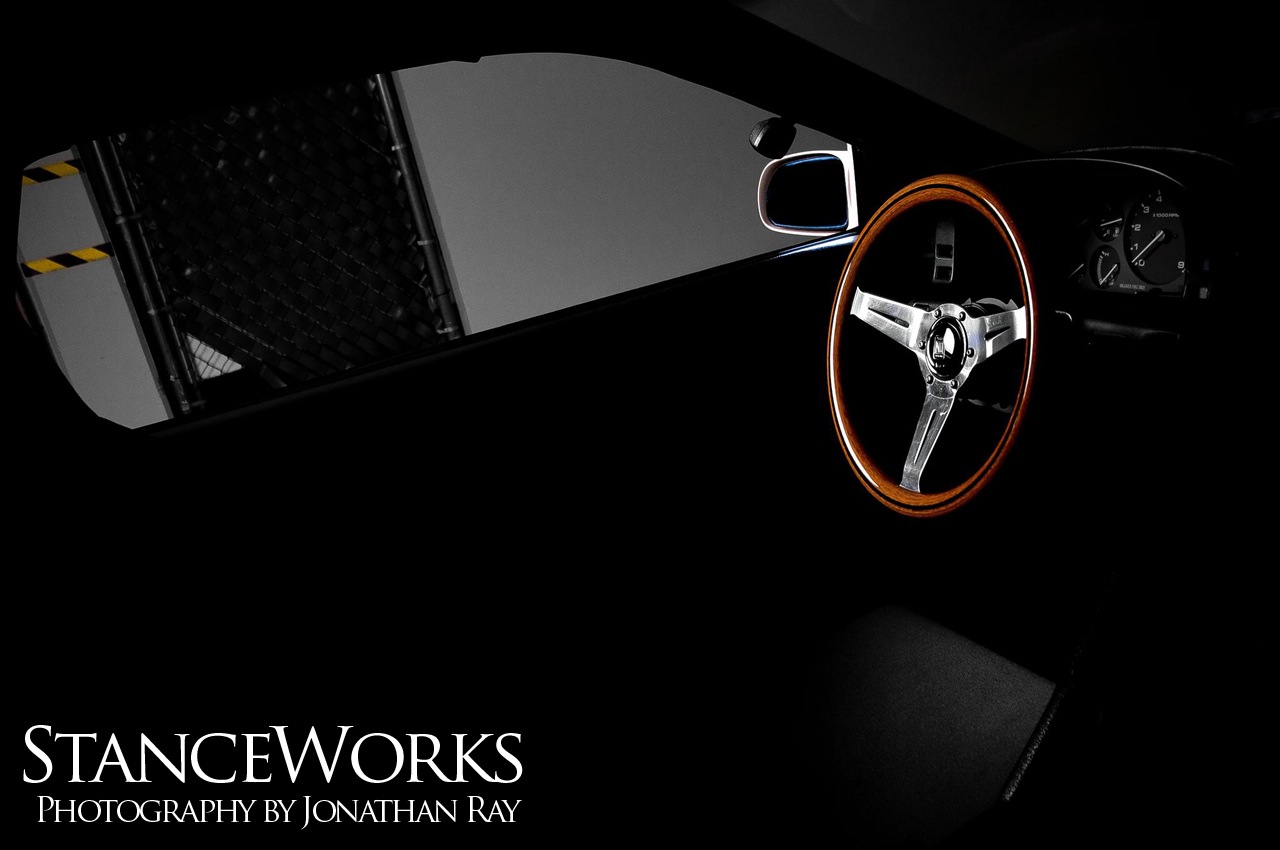 The interesting thing about cars from the '80s were the interior options offered. I was told one of the most difficult modifications on the car was finding a set of seats that matched the "classic" blue interior. It took some time and patience, but eventually Ryan stumbled across a set of Sparco Torino 2 racing seats that matched perfectly! The car is also fitted with a Nardi Classic steering wheel and shift knob as well as an NRG hub and quick release. The ancient '80s stereo has been replaced with a Kenwood Deck, front and rear spakers, a set of JL Audio 12w4s and a JL 1000.1 amp in the back. 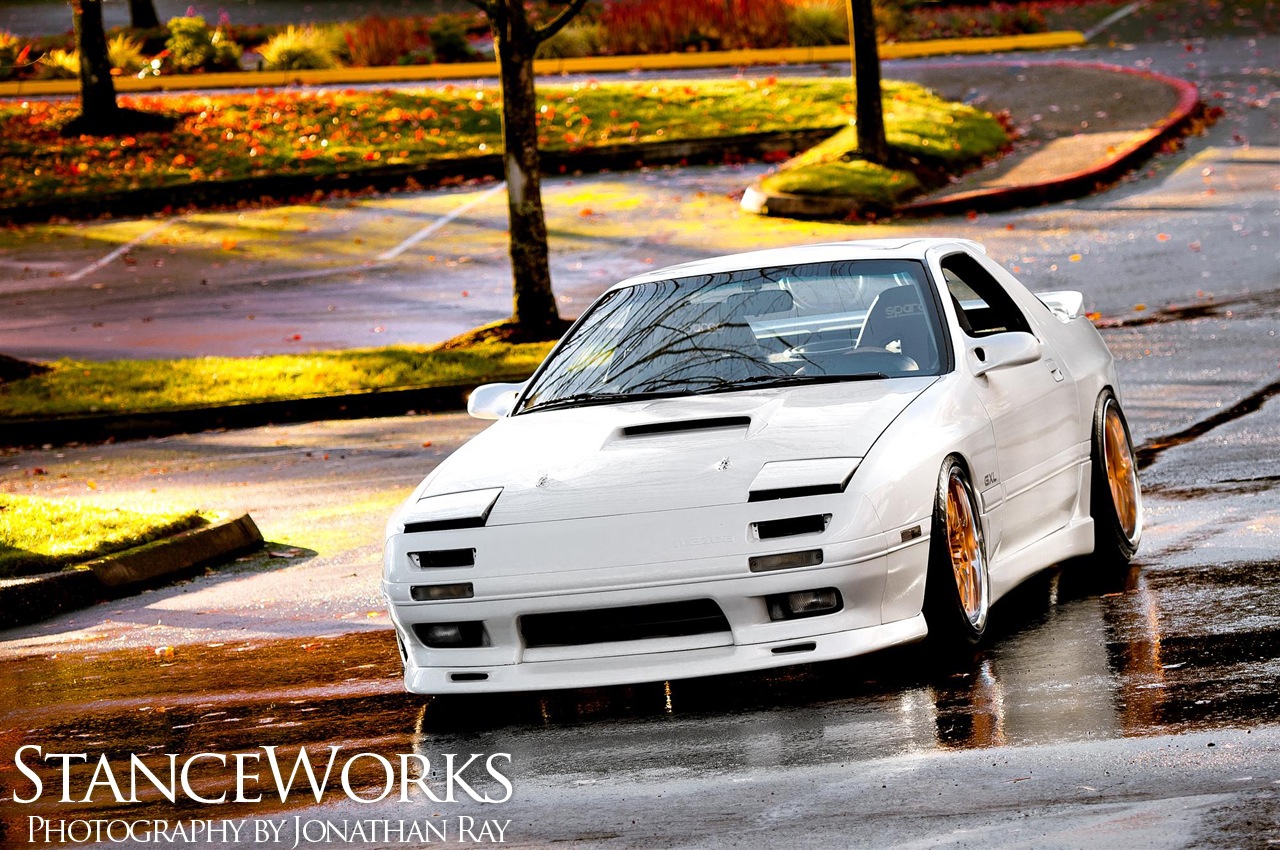 The motor has been very lightly modified as Ryan is enjoying the reliability and low mileage for the time being. The engine breathes through an HKS intake while exhaust gasses are efficiently dispensed through a Corksport header and race-pipe and then exit through an Apexi N1 dual cat-back. I talked to Ryan about his future plans and was interested to hear that he really enjoyed n/a rotary builds. While definitely interesting and unique, he stressed that he wasn't absolutely commited to that idea and has been weighing his options. 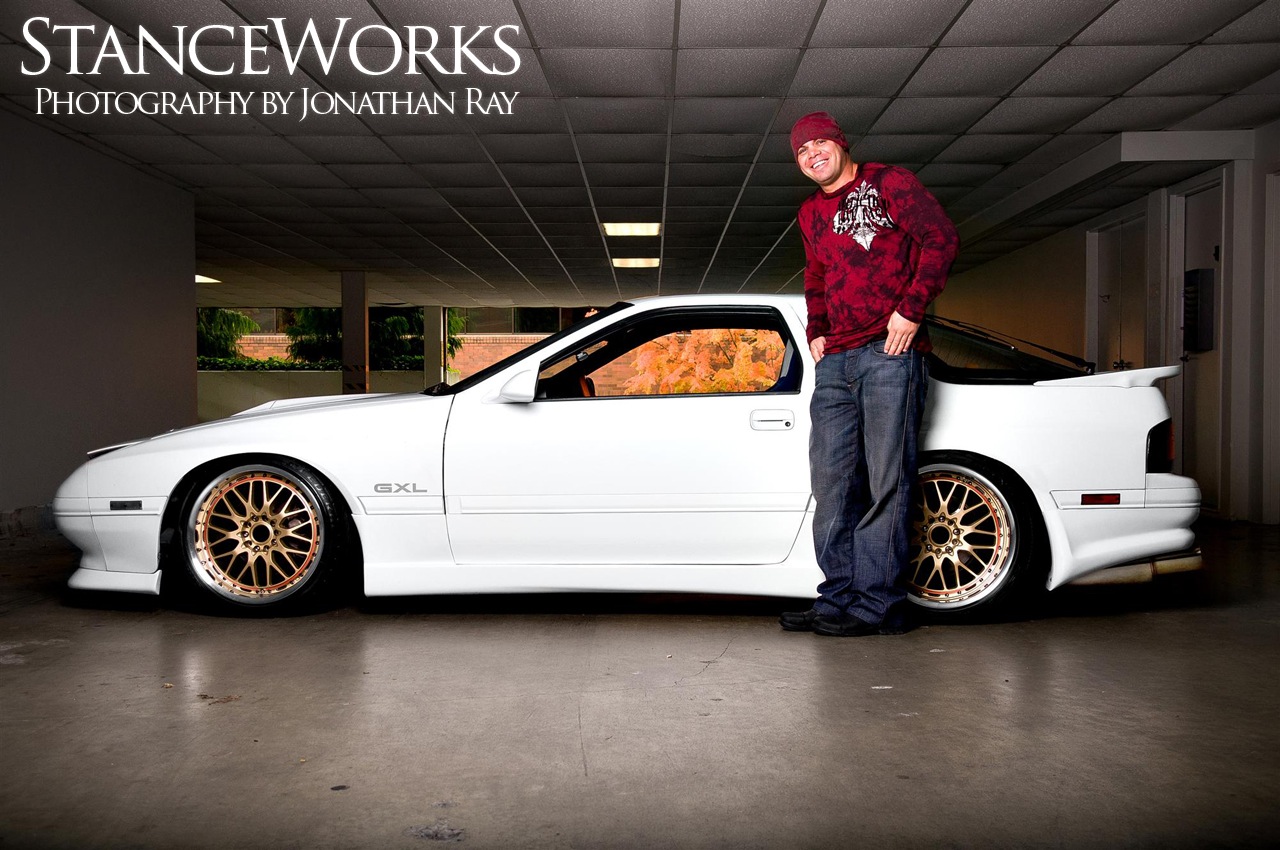 What struck me the most about Ryan's build was the patience and thorough planning he put into every step of the build. He never settled for less and followed through to build a car that resembled the vision he had. He also stressed to me that he always looked for quality in his build and made sure to purchase parts that reflect that, even if the cost or effort attaining those parts was significant at times.

I hope there is a lesson learned in this build. You shouldn't sell out and abandon your vision and goals regardless of how accessible or affordable it is to take the easy road. If you stick to your guns and remain dedicated the final product will surely reflect your own individual style - maybe you'll have the next car featured on the StanceWorks blog?

We'd like to thank Jonathan Ray of RoyaleAgency.com for contributing this excellent set of photos!  We've been impressed with his previous work and were delighted when he submitted these images to us.  I'd definitely consider him for your photography needs if you reside in the Washington area.