“I’ll Never Sell It” – A New Chapter for Rusty Slammington

“I’ll Never Sell It” – A New Chapter for Rusty Slammington

"I'll never sell it." It's something many of us have said about one car or another, and typically, it doesn't hold true. I can't begin to count the number of StanceWorks feature cars that have been described as "forever cars" by their owners, insistent that their pride and joy will never be for sale, only to be listed within a month following its internet debut. Times change, feelings change, and priorities change, so I can't quite fault anyone for it. The thing is, I've said it too. "I'd never sell Rusty," in particular. I'd usually follow that with "well, unless BMW or a museum wanted it." I'm sure you can see where this is headed. To get to the point: I sold Rusty. A while ago, in fact: last August, and I've been relatively quiet about it ever since.  I figured I'd wait for the "right time," when it felt apt to share with the world, but as time goes on, it has become abundantly clear that there's likely no better time than now. 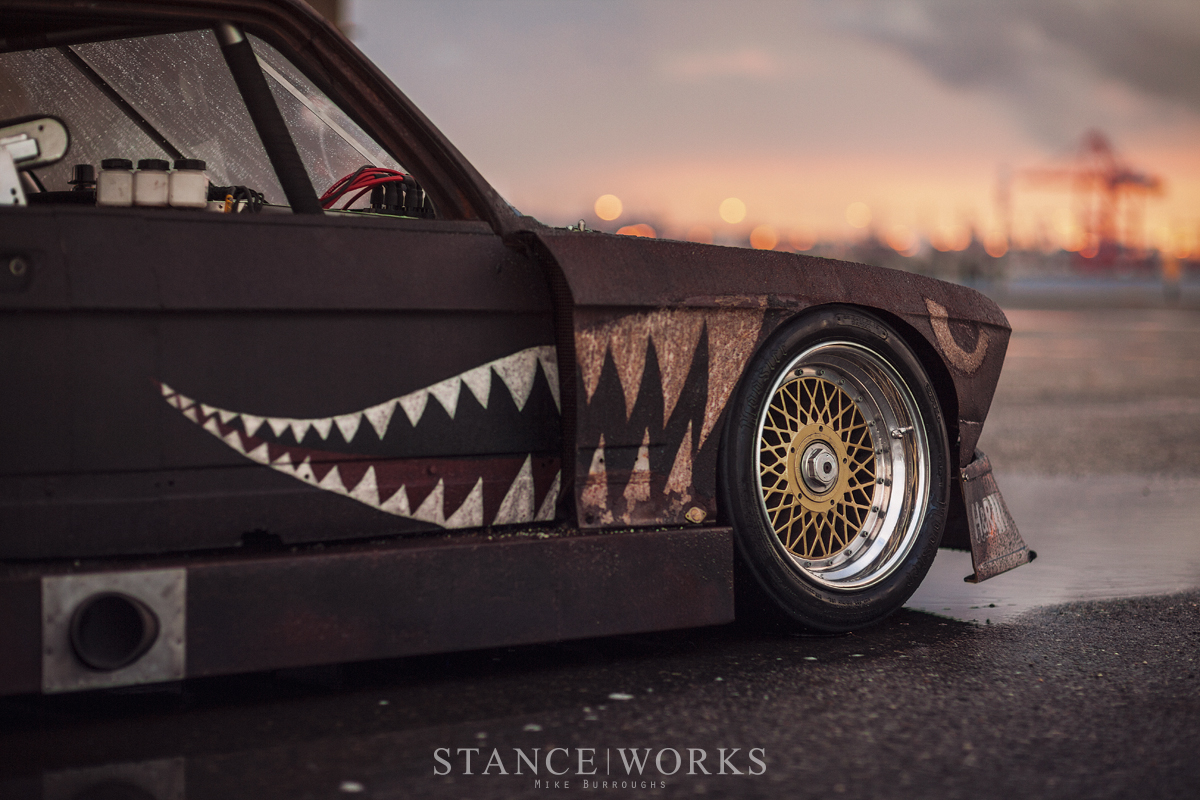 When I said I'd never sell Rusty, I truly meant it at the time. Rusty's responsible for everything I am today, and for almost every friend I've made along the way. Rusty has played a massive, significant role in shaping me as a whole. We've been through a lot, from cross-country road trips and more than just a few roadside breakdowns, to plenty of "firsts" in the world of BMW tuning and making an impact. I like to think Rusty helped shape the community as a whole, if only in some small way. 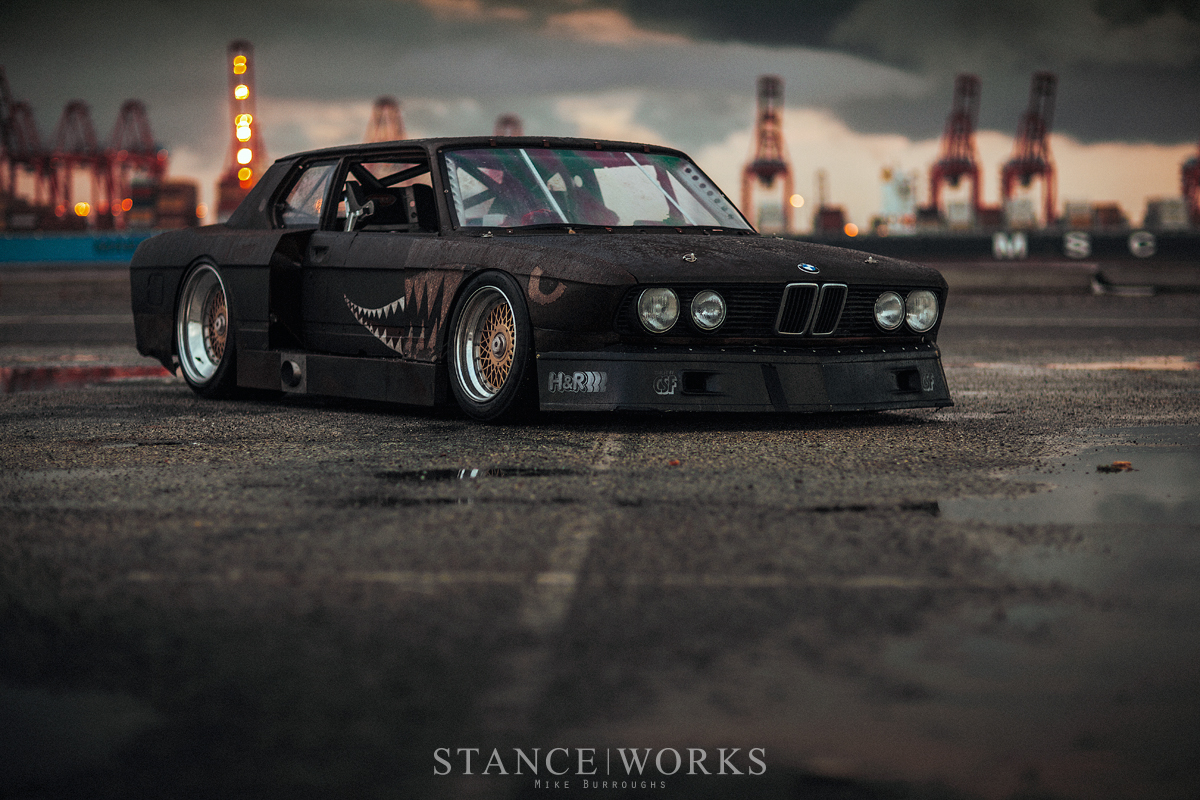 When Rusty burnt to a crisp, though, everything changed. I knew I had to bring him back to life, and knew that in doing so, I should push myself, and Rusty, to our absolute limits. The result is what I call the Group 5 Car from Hell, and to say I'm proud of the outcome is an understatement. The build taught me a lot, and helped to establish exactly who I am and where I'm going with my passion as an automotive enthusiast. The downside, though, is that the car that once meant the world to me died in that fire. What was rebuilt was an evolution... a new stage, a new chapter... but in building it, most of what made Rusty "Rusty" had to be sacrificed. 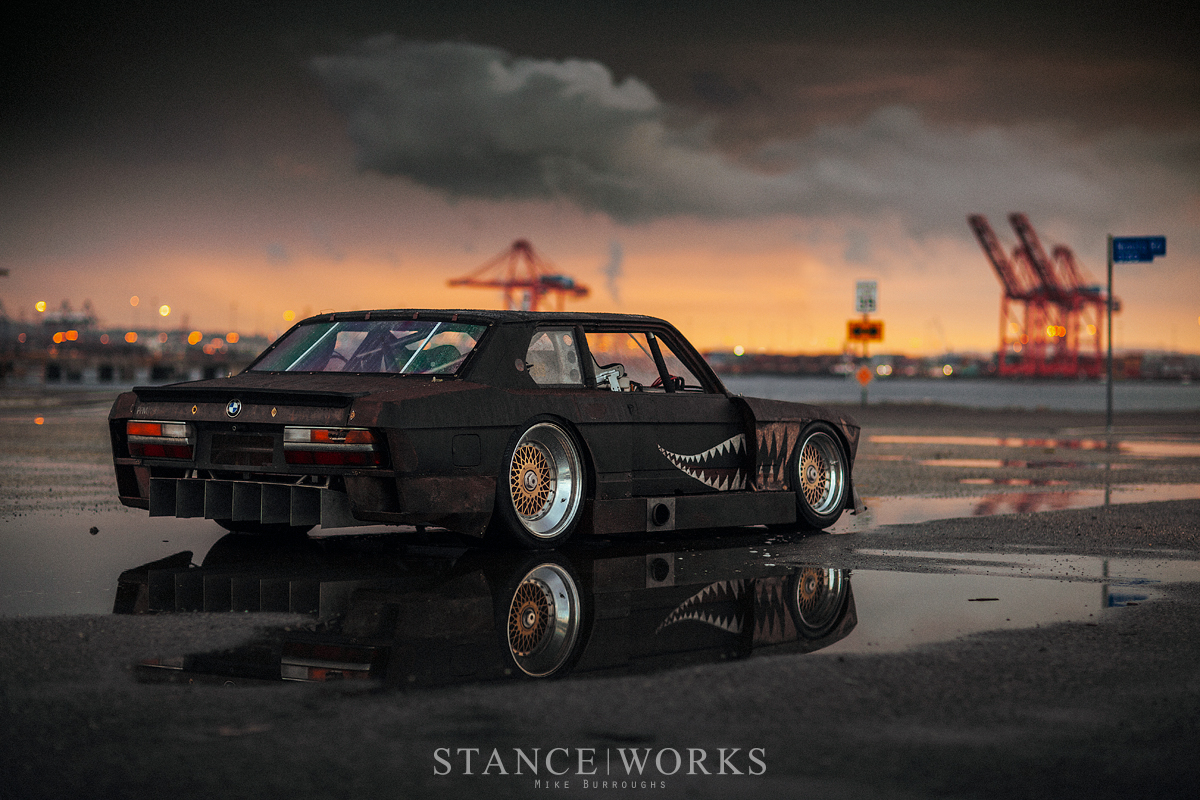 There'a lot to unpack in that statement, I'm sure. It's hard thought to verbalize. In short, I suppose, the car I drove across the United States, the car that established countless friendships, the car I was able to use on a whim, and recklessly at that, was gone forever. In its place, a phoenix rose from the ashes, but it turns out building a balls-out tube chassis race car with a 14:1 compression dry sump race engine modeled after an M1 Procar motor has its drawbacks. 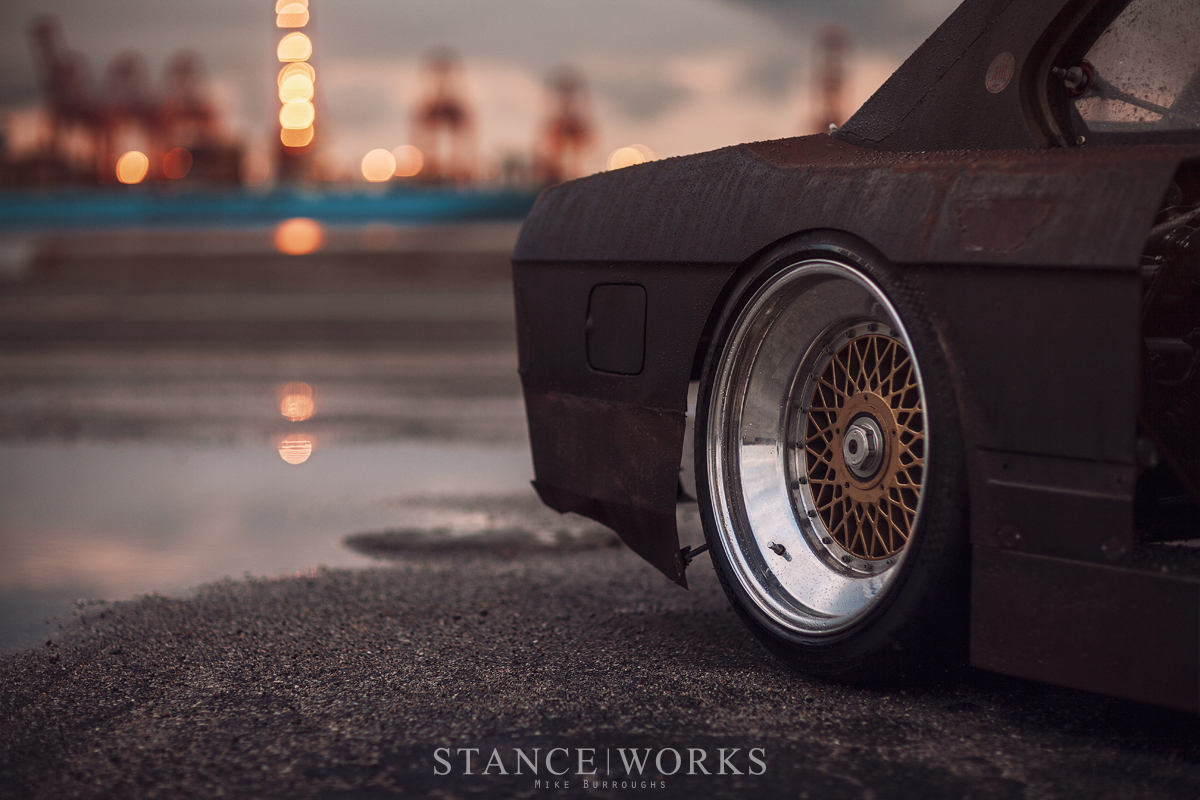 That's not to suggest I have any regrets. I don't, and I wouldn't change a thing. Building Rusty as he is today was pivotal for me, and crucial in an immeasurable number of ways. As a result, though, I built a car that can't be "used." Rusty is far from street legal,  the engine is too high strung to street drive, and simply put, it's as impractical as it gets. It means Rusty spends a lot more time collecting dust than anything else. 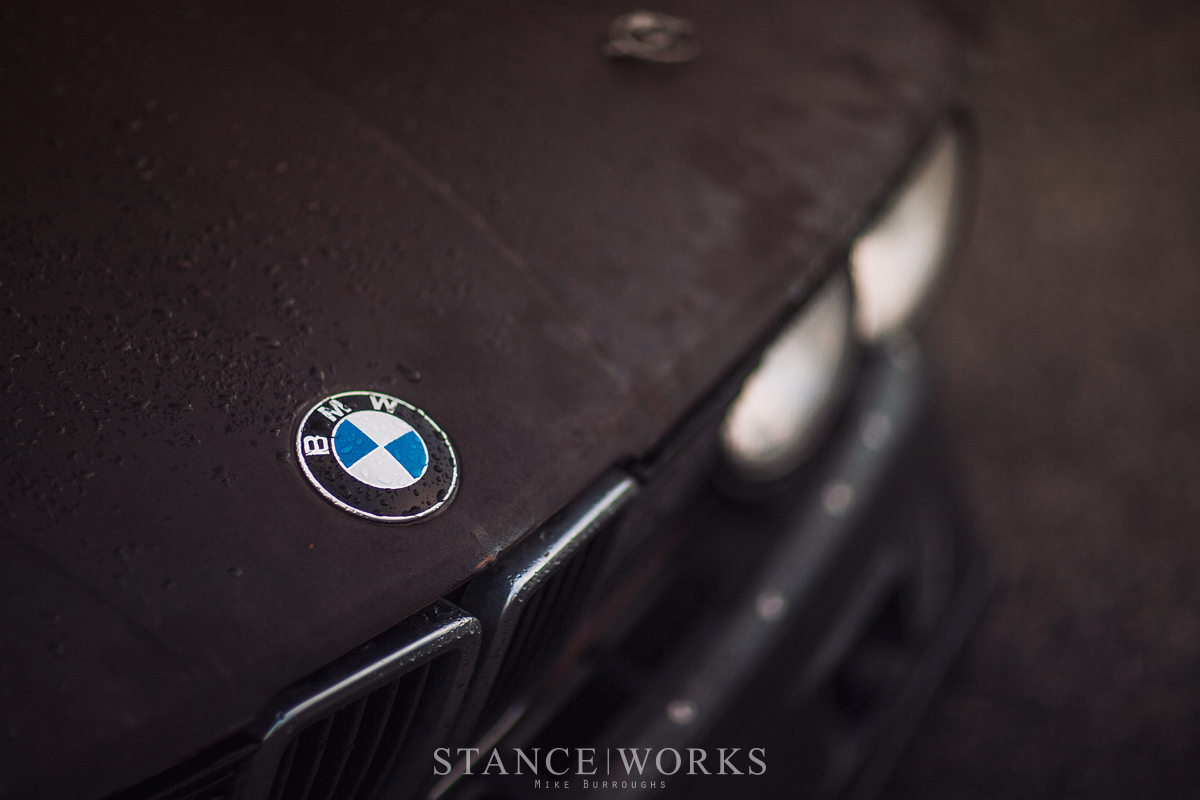 I insisted I'd only sell the car to BMW, or to a museum, and while that's not quite the case, it's not far from it. It was roughly 18 months ago that a longtime friend and BMW Collector made it known that he'd like to make Rusty a part of his collection. It was an offer I was entirely unprepared for, and at first, largely opposed to. Over the course of nearly a year, though, the Collector and I spent time discussing my thoughts and feelings, and in time, I knew it was the right decision to make, regardless of money itself. 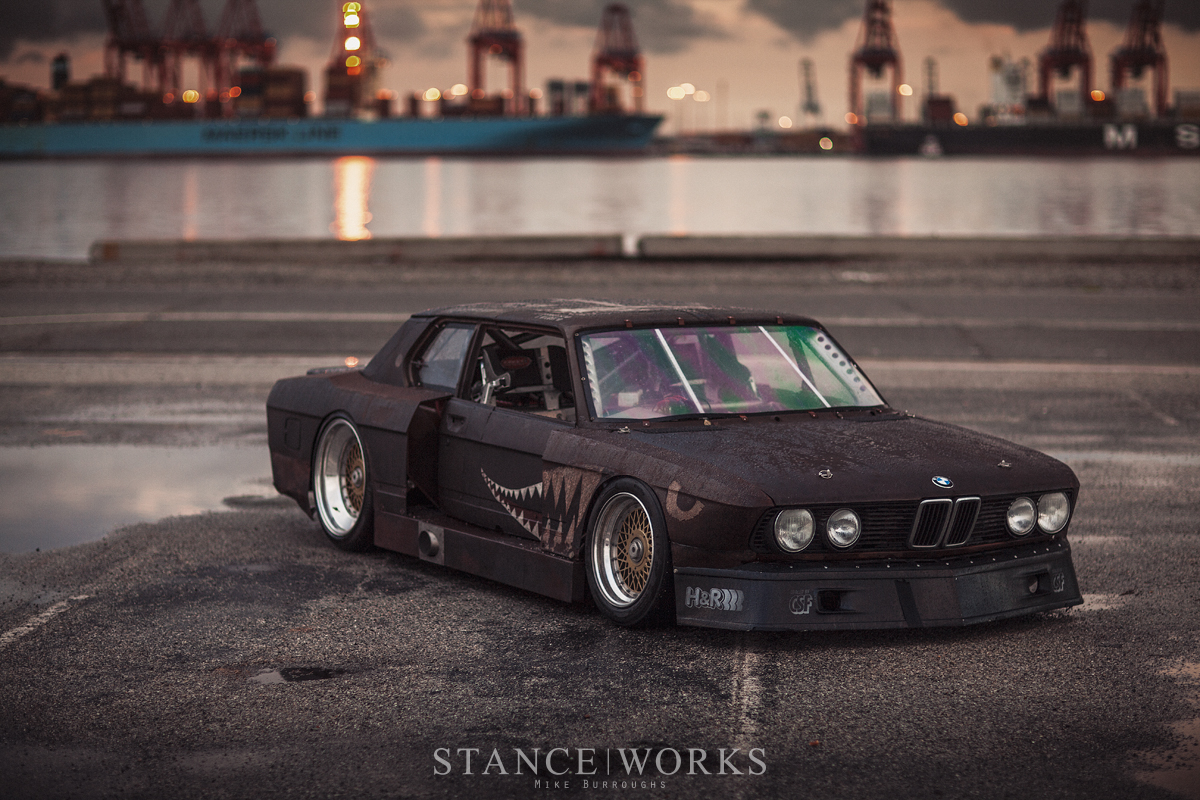 As I've explained to others that have asked lately, I call it the "Chapter Dilemma." Rusty has had a lot of chapters, to say the least. There's its original all-black state, the rusted hood, the following completely-rusted look that really set things in motion, the shark mouth, the 1JZ, the chopped top, and now, to name a few. That of course means the story can't be over yet.  There is at least one more chapter left. 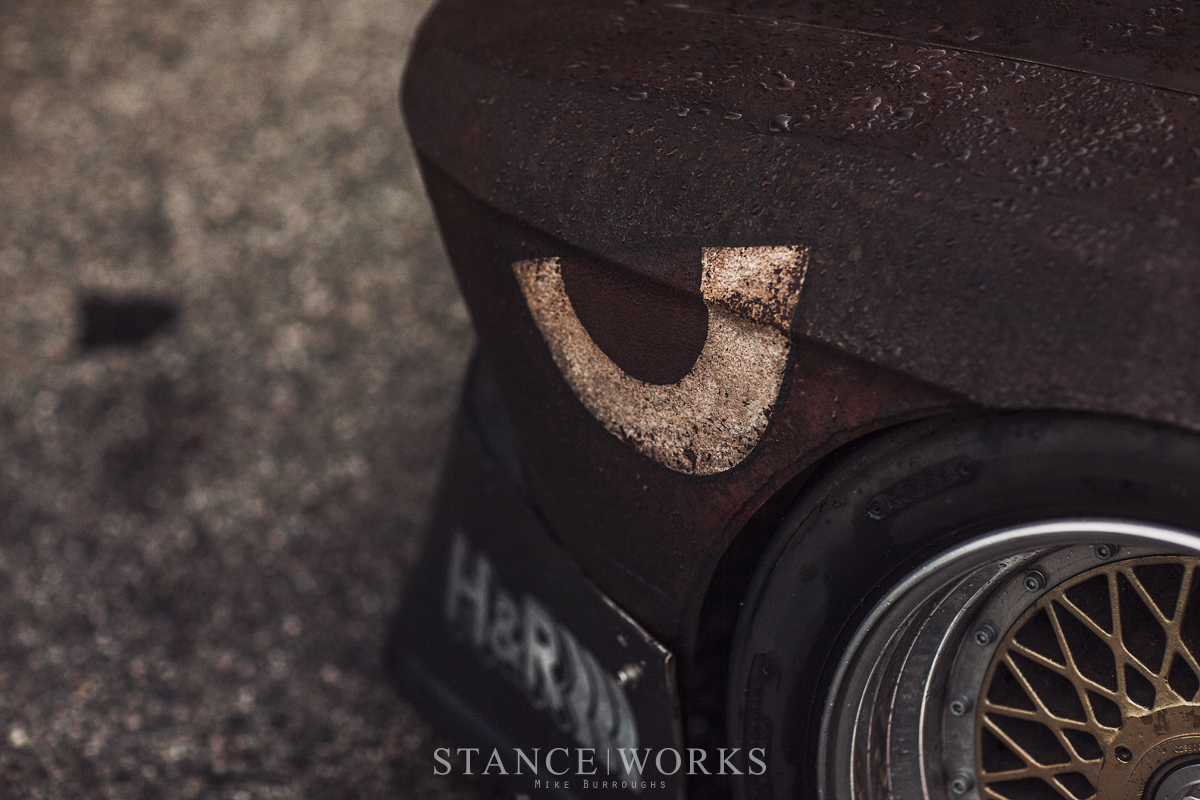 What that chapter is, exactly, was up for debate, initially.  I had, for some time, thought about building molds of the body panels, and having fiberglass or carbon body parts made, so that I could "finish" the body in paint, to bring the car full-circle as a finished race car; however, I eventually came to the conclusion that that would mean Rusty is no longer Rusty. No part would remain from the original car, nor would anything that established its original ethos. I realized I could do the same thing starting from scratch, and so I nixed the idea as the next chapter to come. 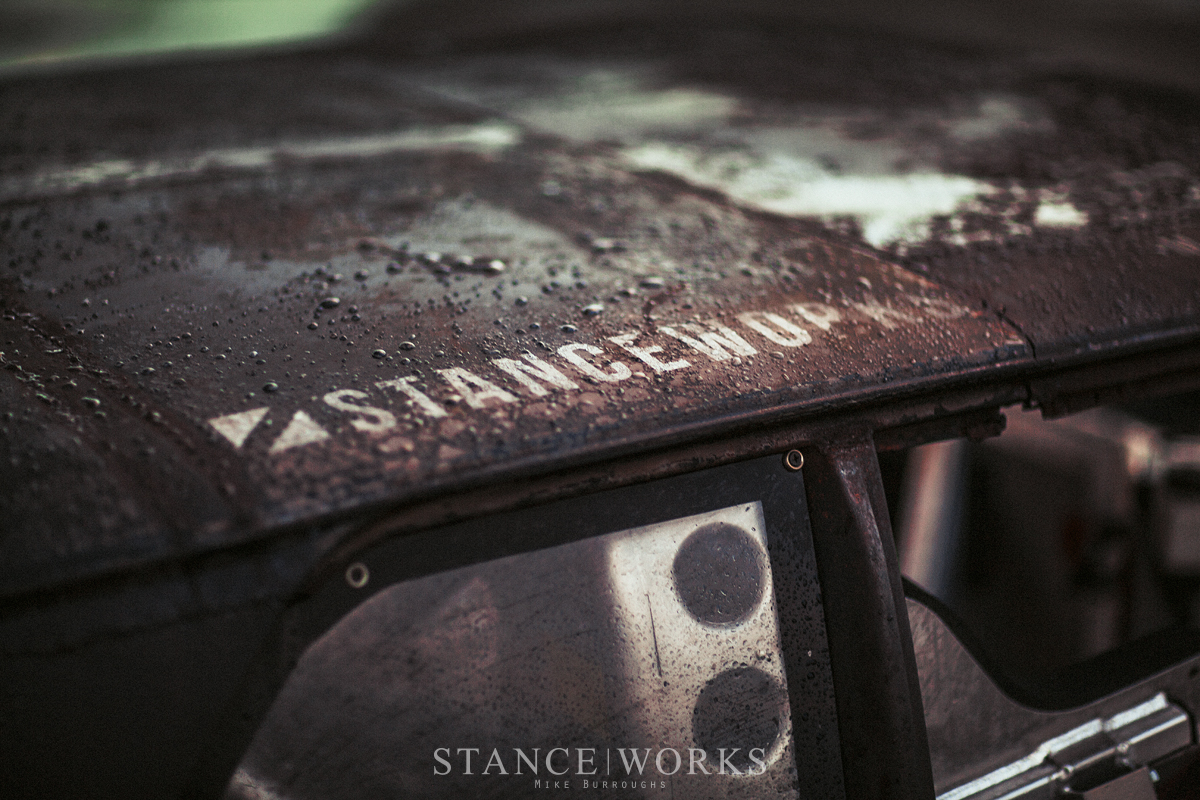 The options that remained were less enticing. I knew I could swap the engine in an attempt to make a more "streetable" car, but that didn't quite sit well either. I knew I could leave it as is, too, but I simply lack the ability to afford to operate the car, as-is, for track days and the like. I built myself into a corner. It began to look like the next chapter would be that the car would be moved around the StanceWorks shop for the foreseeable future, and taken to shows/events on rare occasions. While that does sort of sum up the ownership of most show cars, I knew it wasn't a good fit for me. 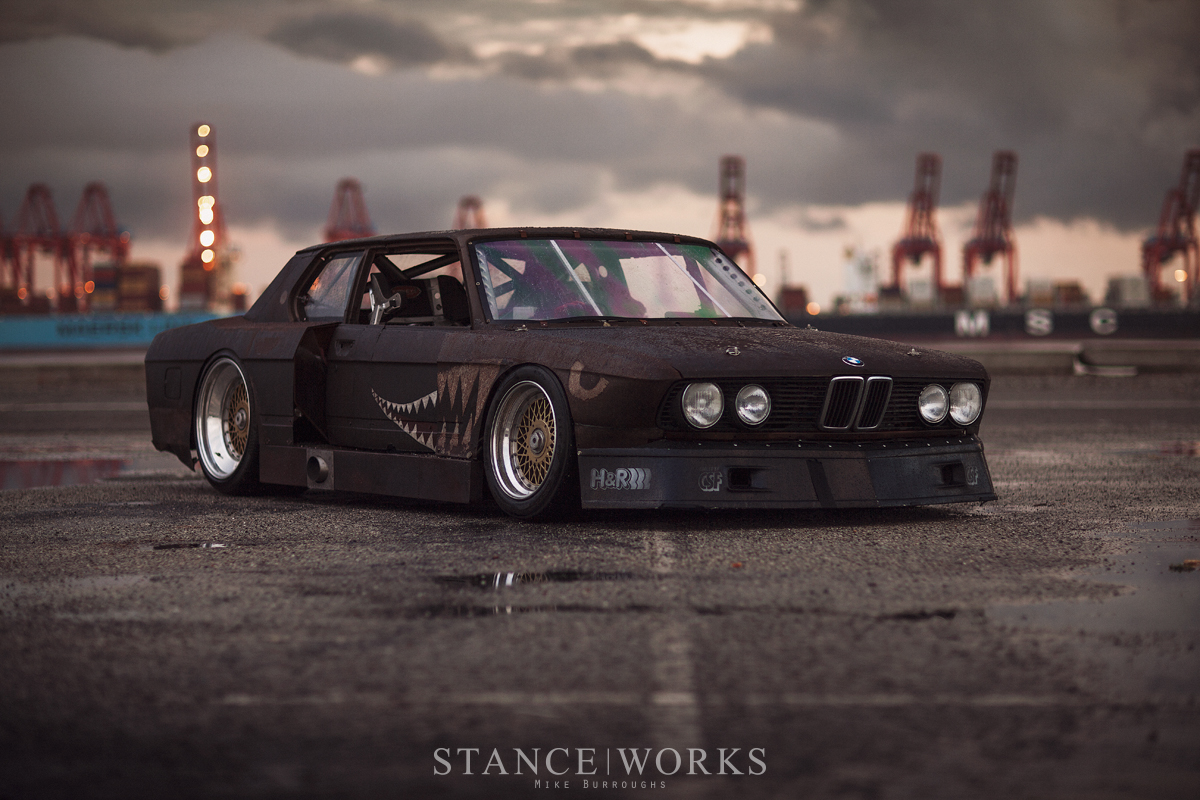 But then came the Collector's offer. "Mike," he said to me. "I don't want to buy your car. I want to be Rusty's next caretaker."  It was sentiments like that which helped to solidify that perhaps relinquishing Rusty was the right choice. As a BMW fanatic with a collection worth dying for, the Collector seemed to be a perfect fit: the ideal next chapter for Rusty's story. While Rusty may no longer be in my hands, it's in the hands of someone that cherishes and respects its history and character, and is eager to share the car with the world. He sees Rusty as more than merely a car; instead, he sees it as an art piece worth preserving. Knowing that Rusty is in perhaps the best hands possible, it's made the decision one I feel is not only good, but instead the best possible scenario. 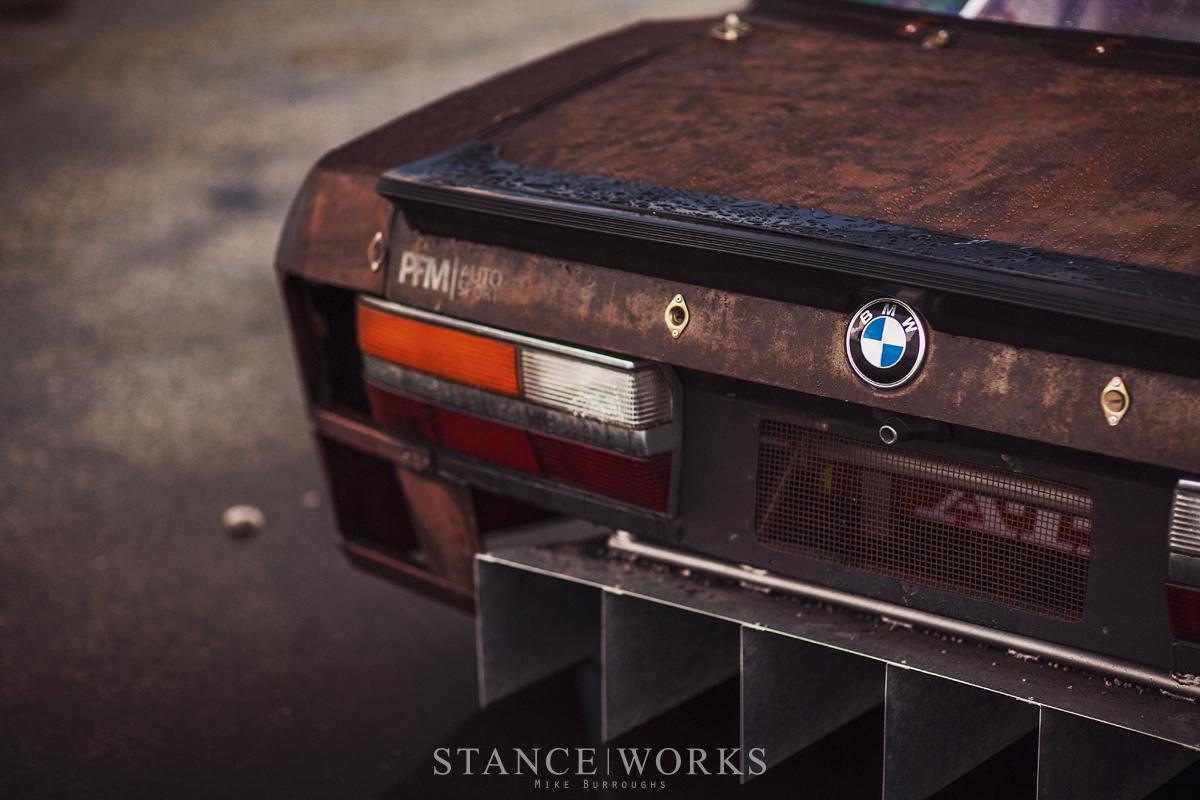 Even though Rusty is no longer hiding in the StanceWorks shop, which is undoubtedly a disappointment to everyone that stops by, rest assured that Rusty is in better hands than ever before. Today, Rusty is lying in wait for the opening day of "Passion: 50 Years of BMW Cars & Community" at the BMW CCA Foundation, the world's second-largest BMW Museum and Archive. On May 17th, the exhibit will open, where BMW enthusiasts from around the world will get to witness a plethora of BMWs and memorabilia. Rusty, too, will be on display for the next year, in Greer, South Carolina, along with an incredible number of historic BMW pieces of automotive and motorsports history. What follows is anyone's guess, but Rusty and his new owner are off to an amazing start, and it serves as wonderful reassurance that Rusty's story doesn't stop with me. This is merely the start of a new chapter. Until the next one... 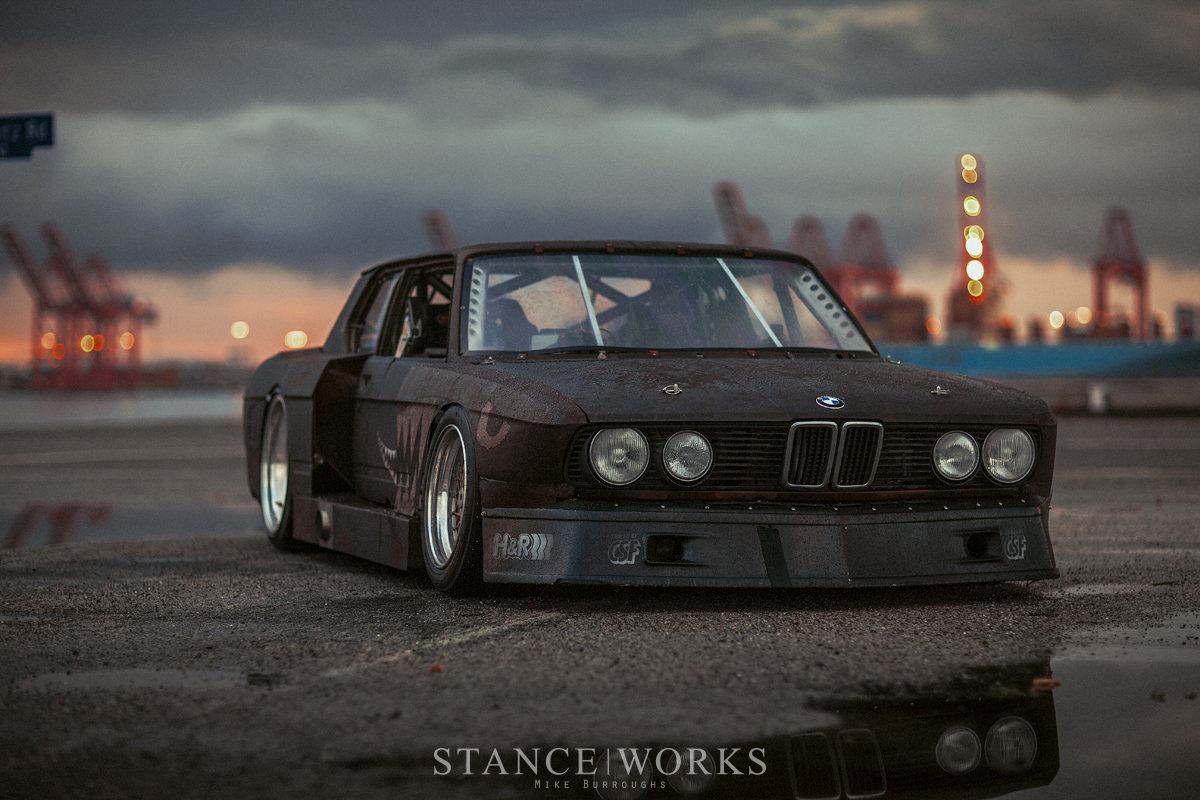