While the popularity of classic BMWs continues to grow, there are undoubtedly a few chassis that have been all but forgotten. The E21 is an obvious example, having fallen into the shadow of its successor, the E30. The E23 7-series is another; while there are quite a few wonderful examples out there, its popularity is hardly measurable. Surprisingly, it's successor, the E32, is somehow even less loved - perhaps the marque's most forgotten offering between the 80s and 90s. Brunson Quint, though, liked just that, and has since built an E32 735i that is sure to capture attention anywhere it goes. 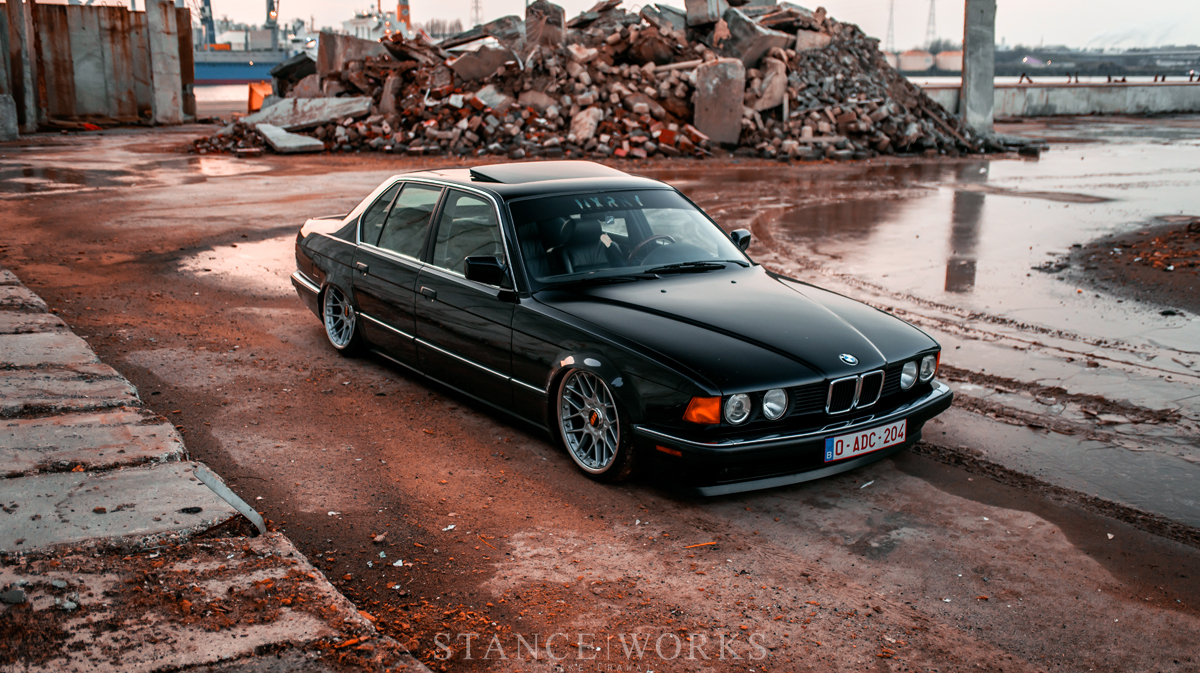 Brunson's list of past builds is on the short side, having spent some time with an Audi A4 as his only other modified vehicle, prior. He purchased an E12 518 some time back, hoping to build something a bit more classic in nature - or an "old timer" as the europeans tend to call them. Following referrals to a garage in the Netherlands, Brunson made the trip to find parts and pieces for the car, hoping to get the build underway, despite parts availability in his small hometown of Gent, Belgium. A tour of the property yielded nothing - not a single E12 to be found. Thankfully, though, the trip was not in vain. 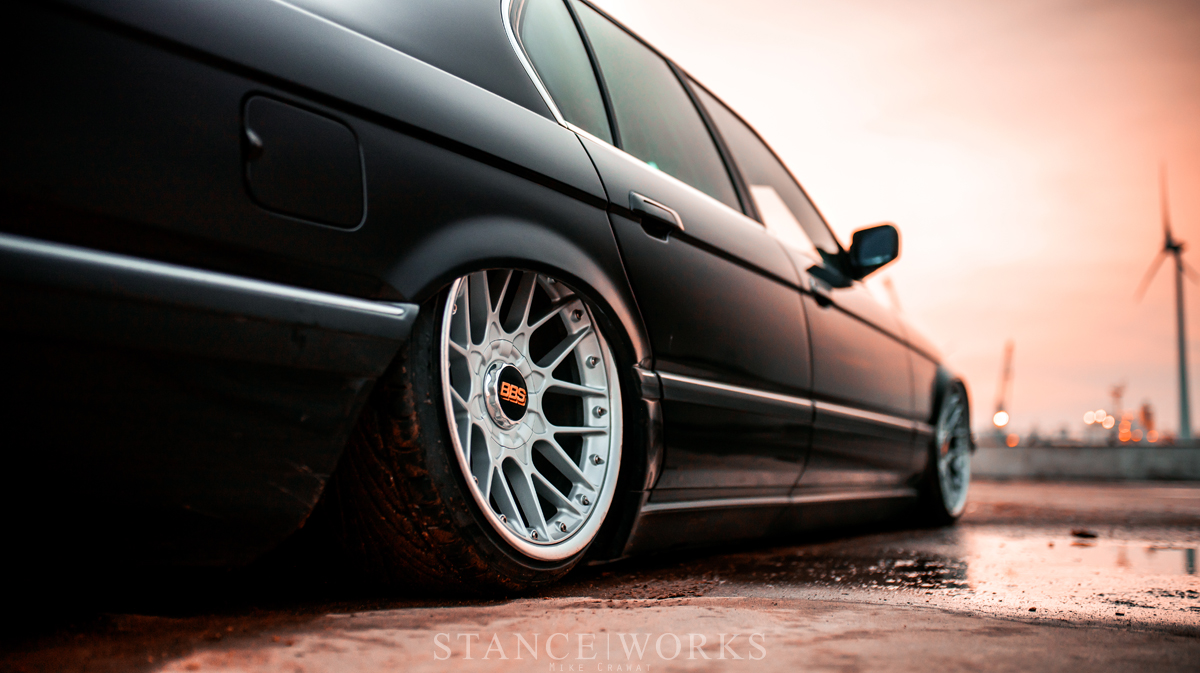 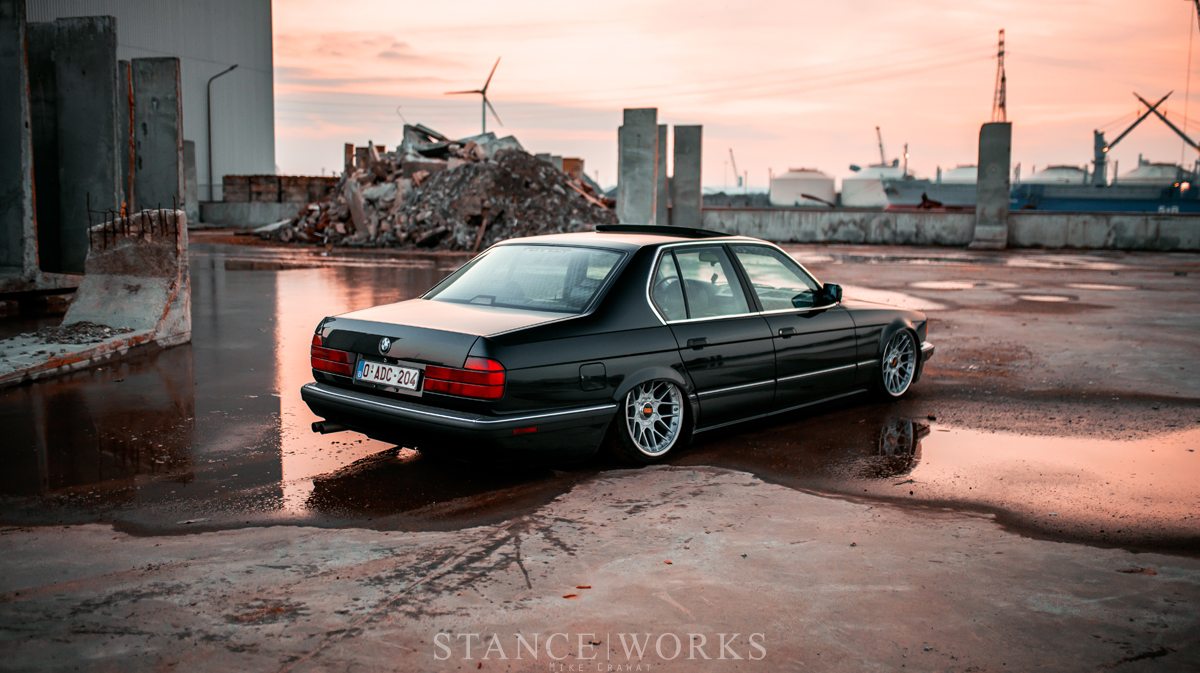 Concluding the tour of the property was a tour of the garage, where the owner kept cars stored away from the rain, if he deemed them worth saving. It was there that Brunson found the E32 - an American model imported through Canada - and immediately fell in love. 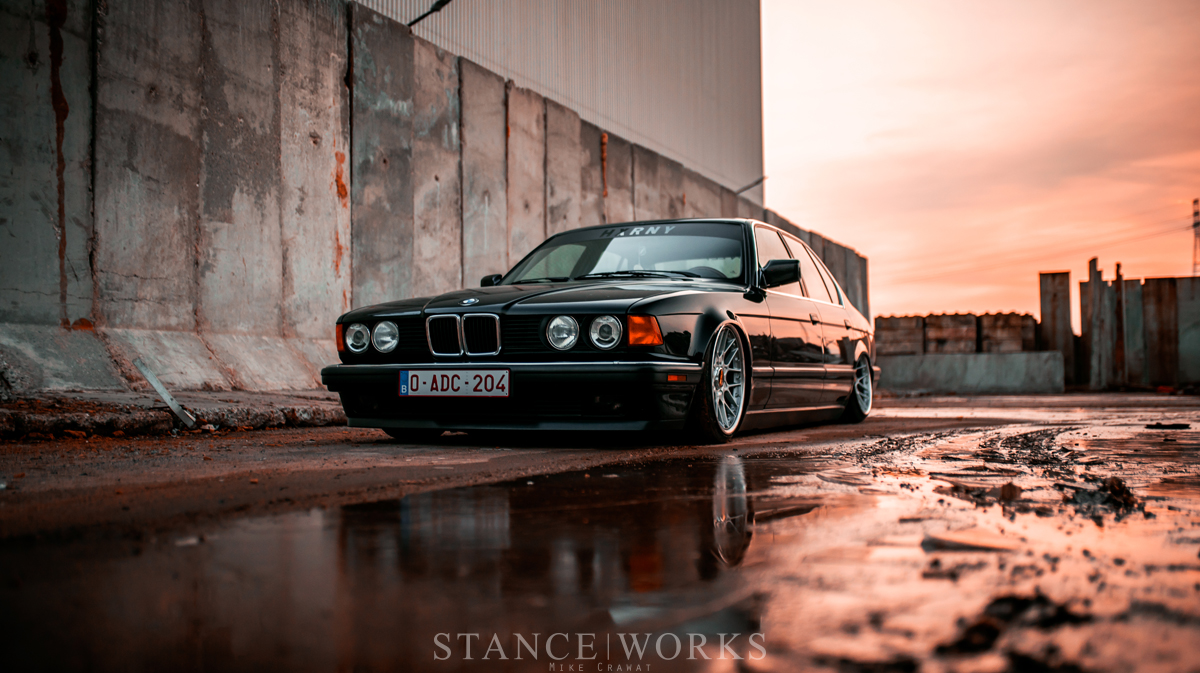 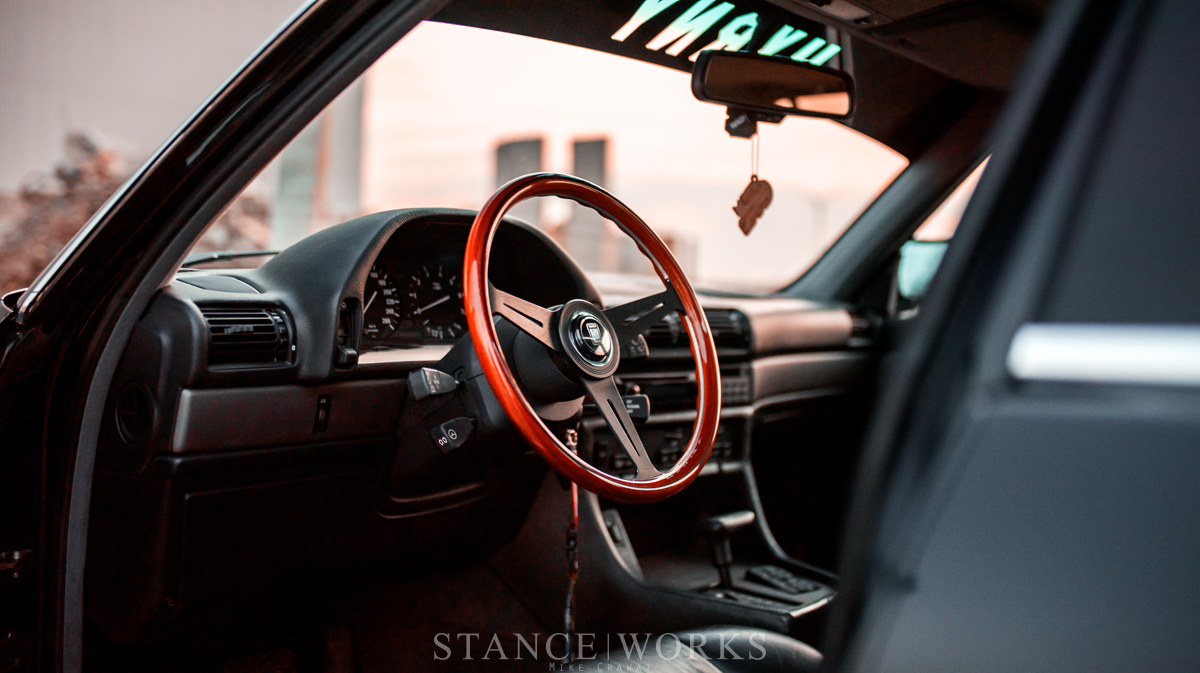 From the get-go, Brunson knew what he wanted to accomplish. Inspired by the builds of his friends, air and wheels were in the cards, with hopes of a car that fit the "gangster" persona of a black-on-black land yacht. 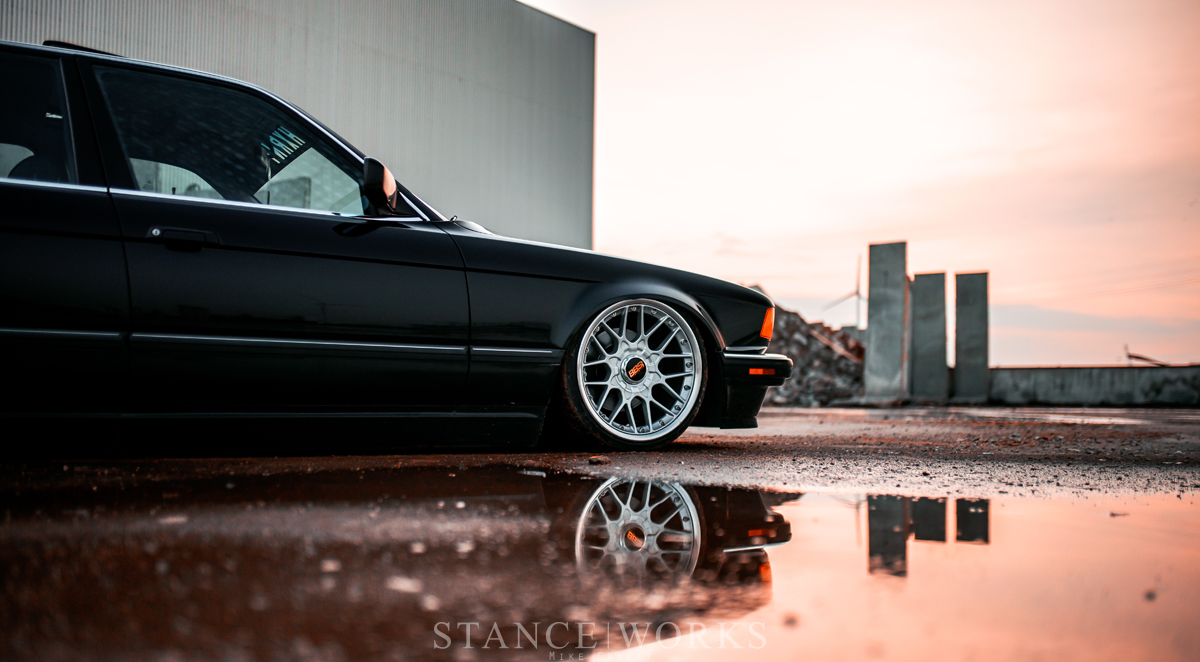 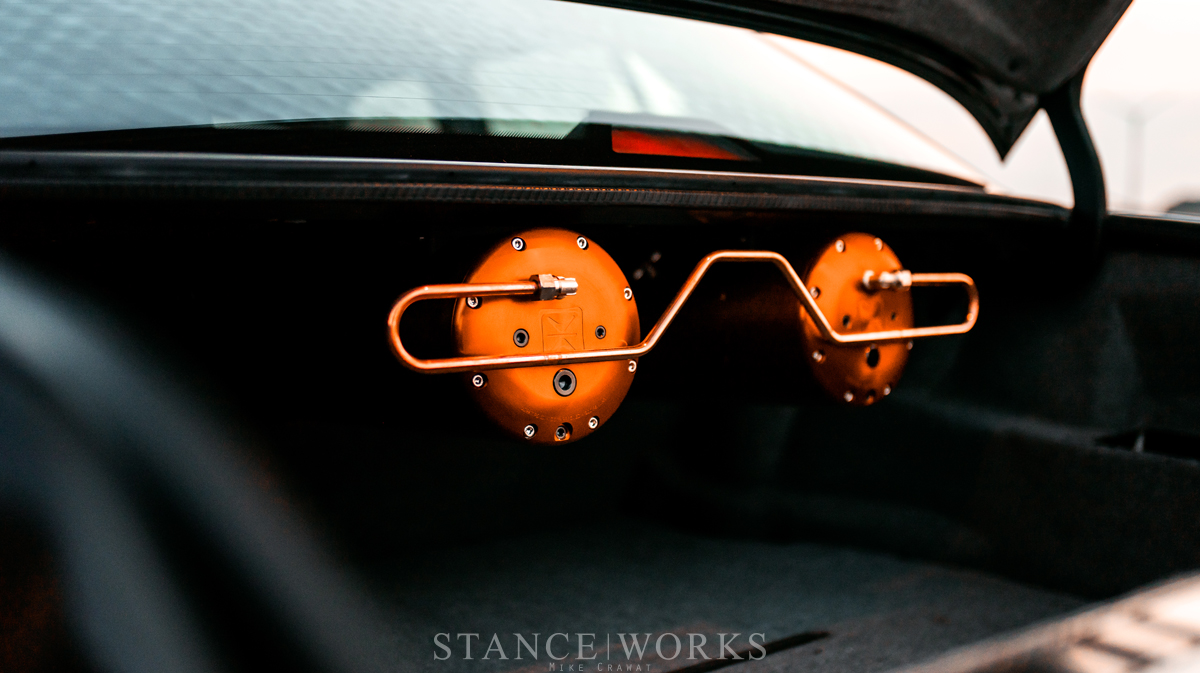 Wanting a system that handled well but laid out entirely, Brunson turned to KEAN for his air struts. With adjustable shock and adjustable ride height, thy offered the needed variables for him to fine-tune the finished product. Complete digital management helps modernize the car a bit, with preset ride heights and on-the-fly control for changing loads and conditions. Everything was of course, custom-made for the E32, which lacks in having much of an aftermarket in any regard. 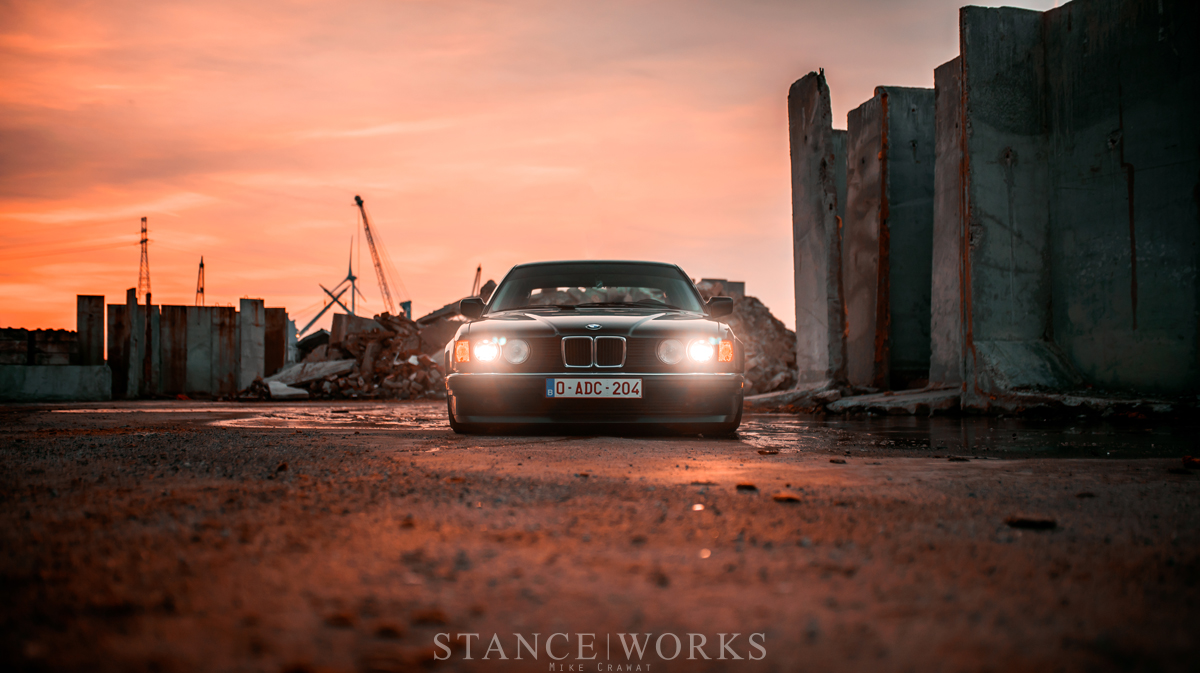 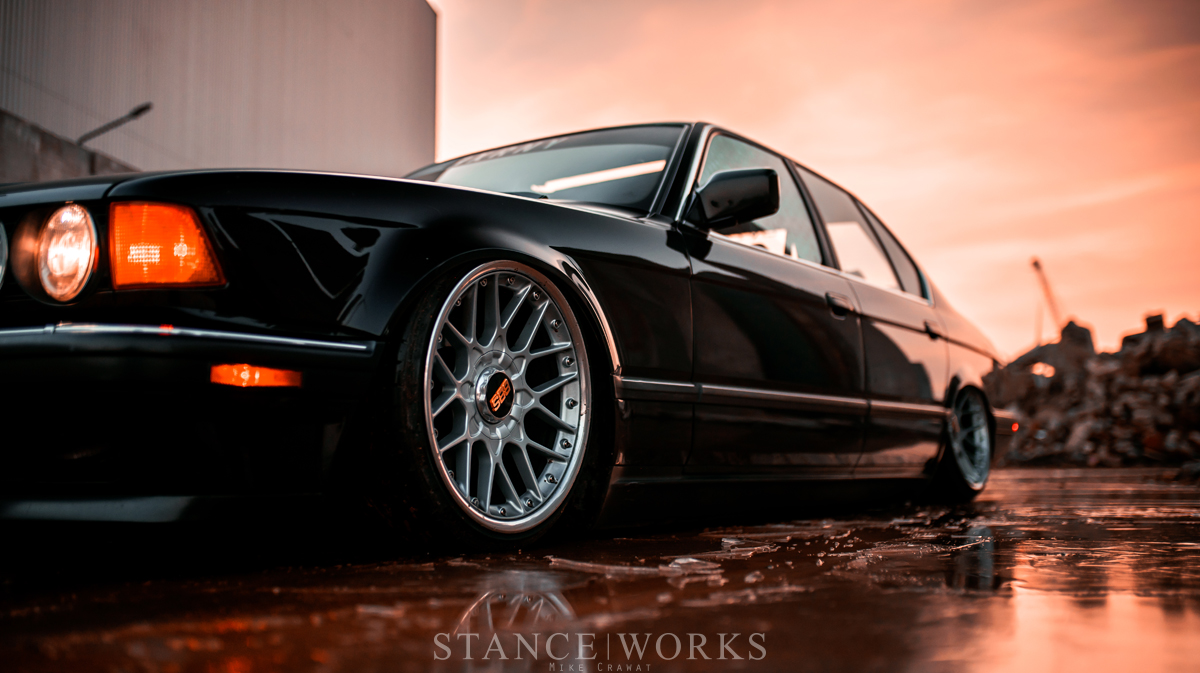 The wheels act as the car's centerpiece and focal point: a set of BBS RS2s measuring out to 18x8.5 and 18x10, wrapped in Toyo Tires. While not a typical choice of wheel, they are perfectly suited to the car's period, and thanks to some very concaved faced, they fill the wells to the brim. 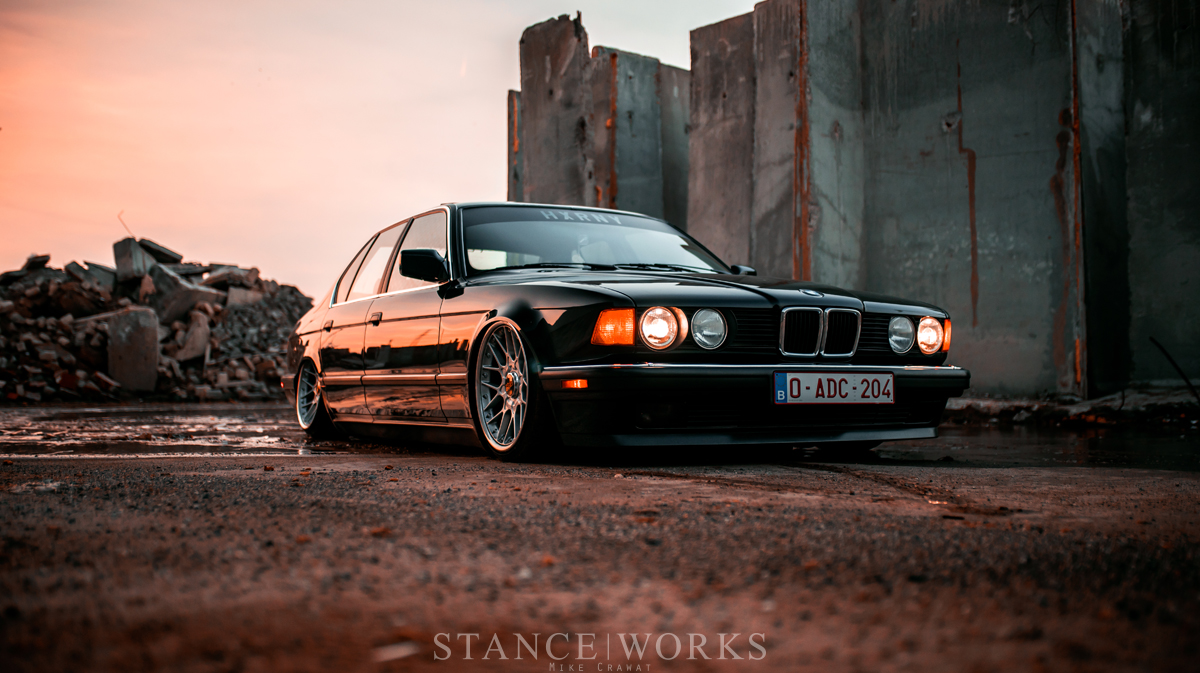 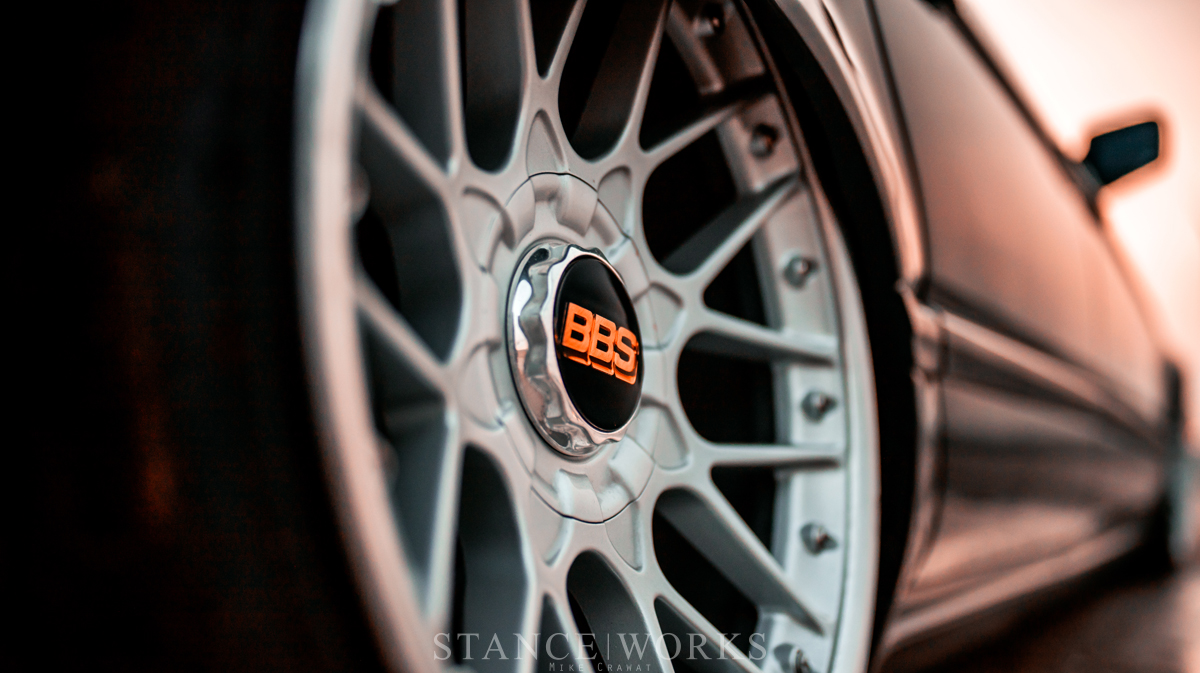 It's the details, like Nardi interior accessories and exterior LED lighting, that help finish out the car, helping to cement the exact vision Brunson had imagined at the very beginning. For a laid out E32, it's probably hard to do better, and we're simply thrilled to see the less-than-loved chassis receiving just that - lots of love. 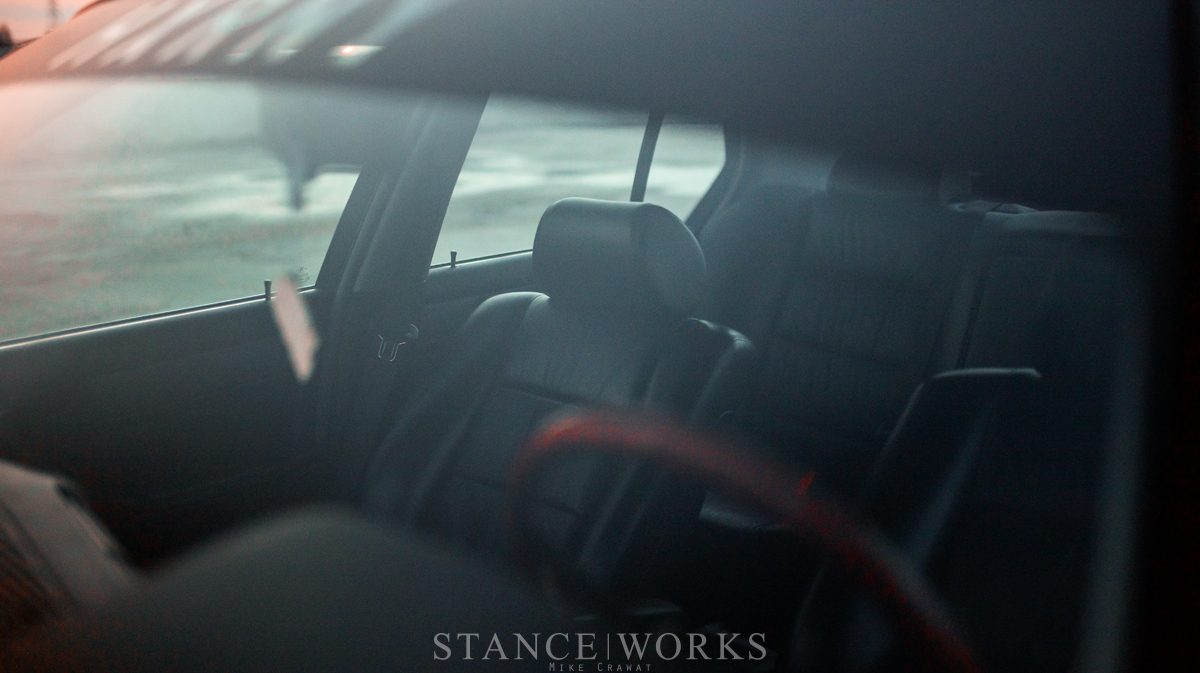 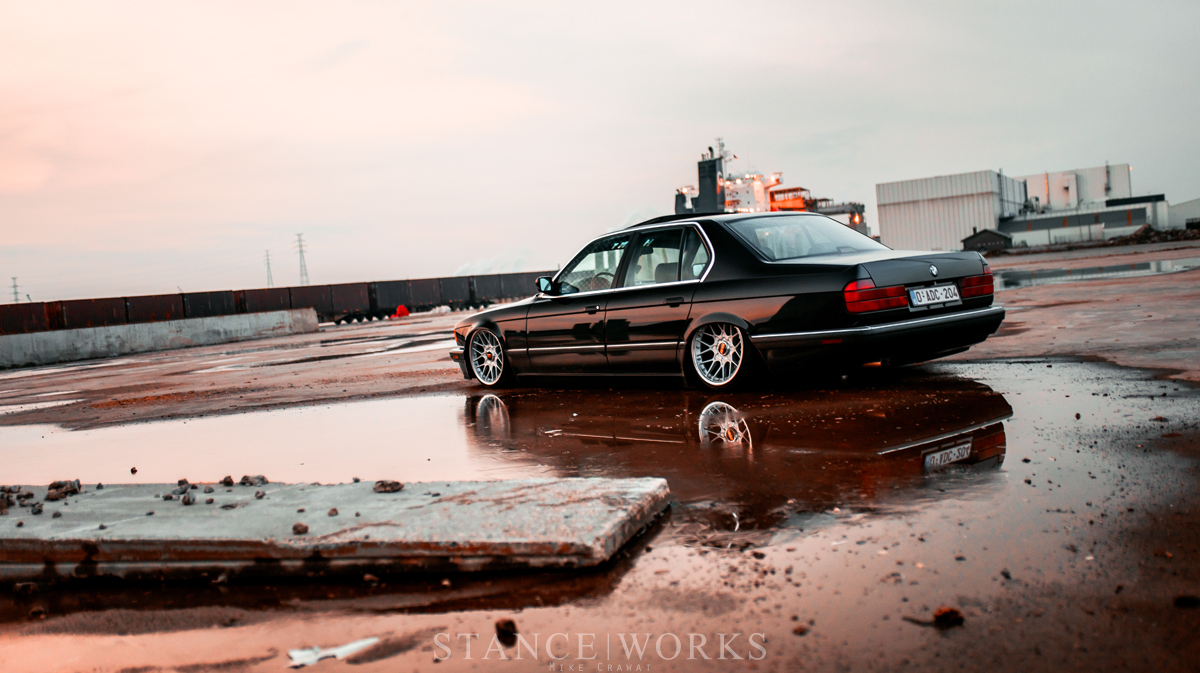 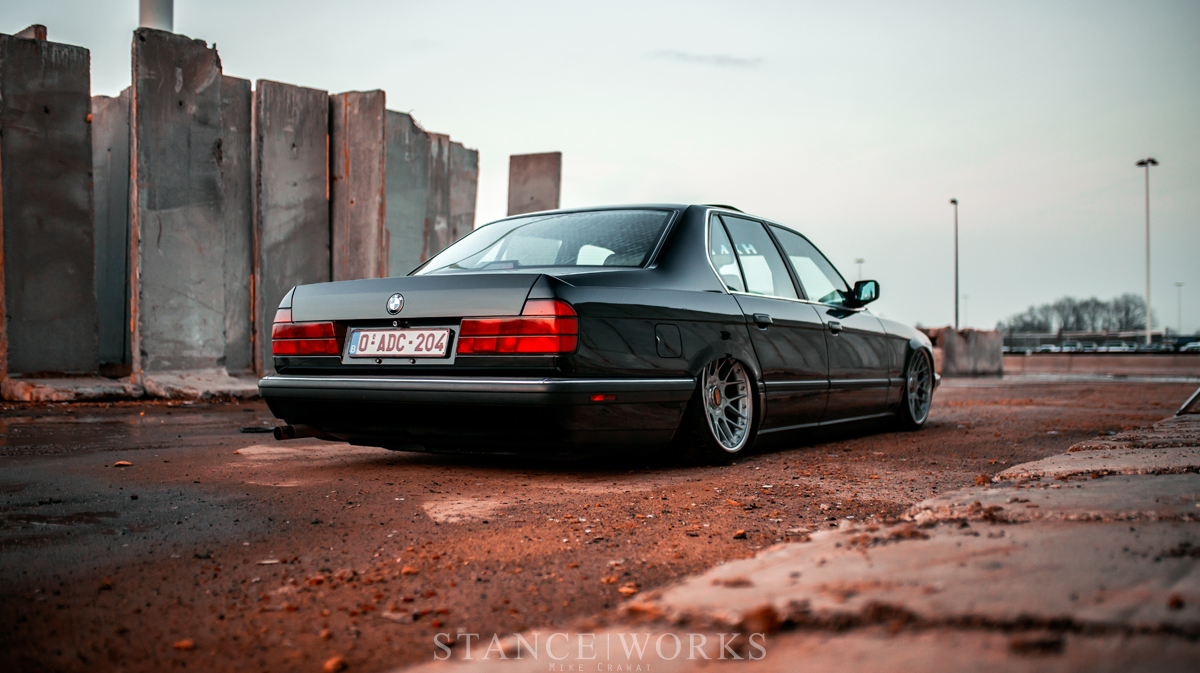 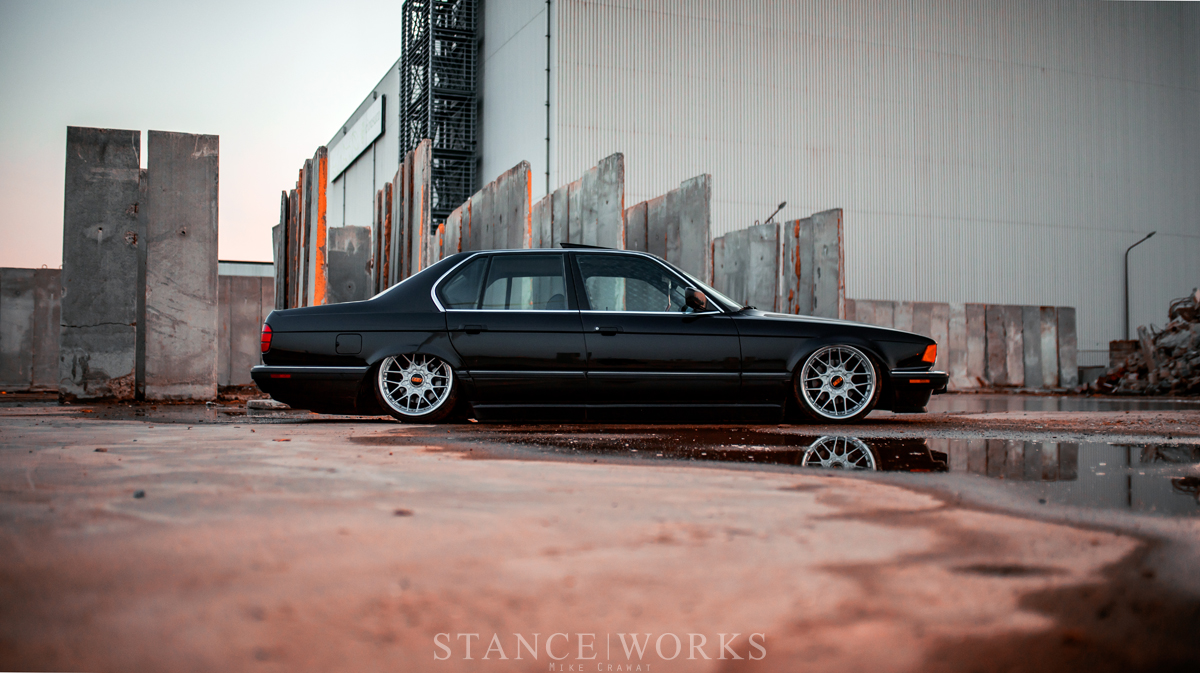