I'll admit: I never expected to feature an Isuzu NPR commercial truck on StanceWorks. This site has taken us to the corners of automotive enthusiasm; however, the realm of custom haulers is one we've only lightly touched upon. While modified ramp trucks and tow rigs are far from uncommon, using Isuzu's NPR chassis to build something one-off isn't something I'd suggest is on the average man's mind. Enter Miles Shinneman, the man behind what he calls the "Baller Hauler," a name we can't help but love as we take in everything it has to offer. 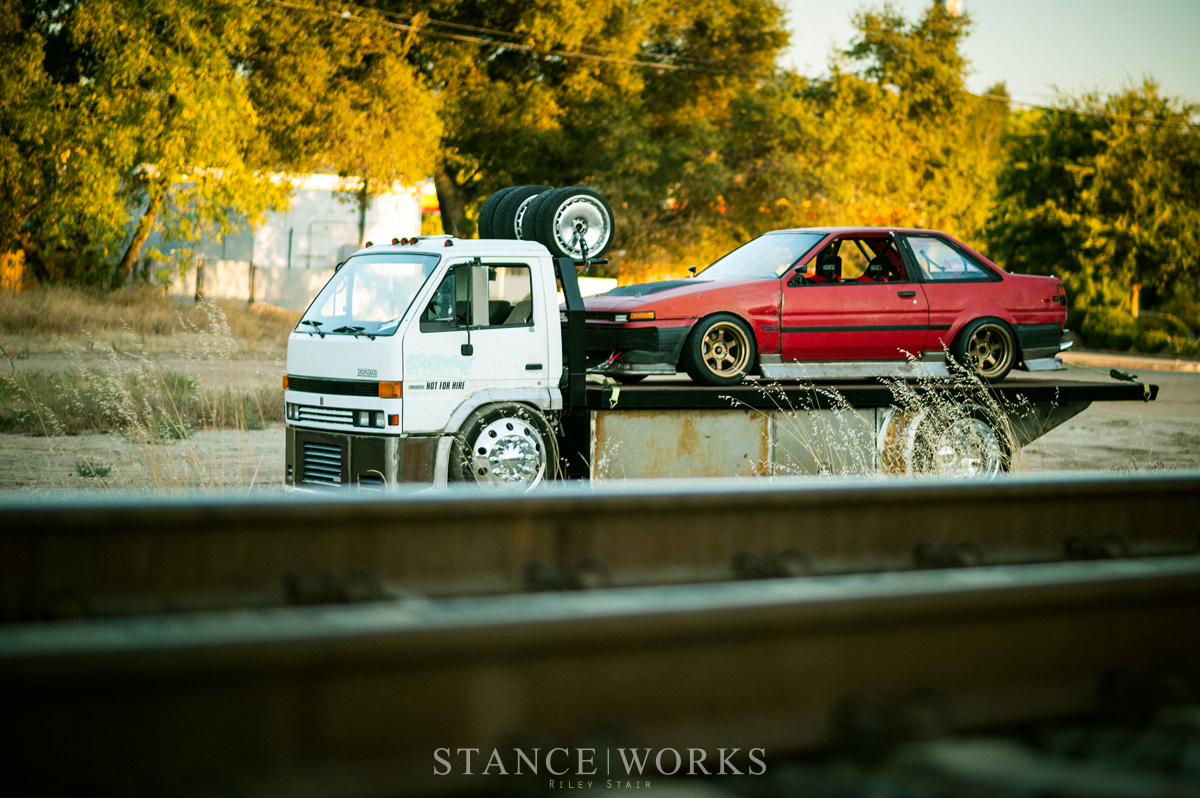 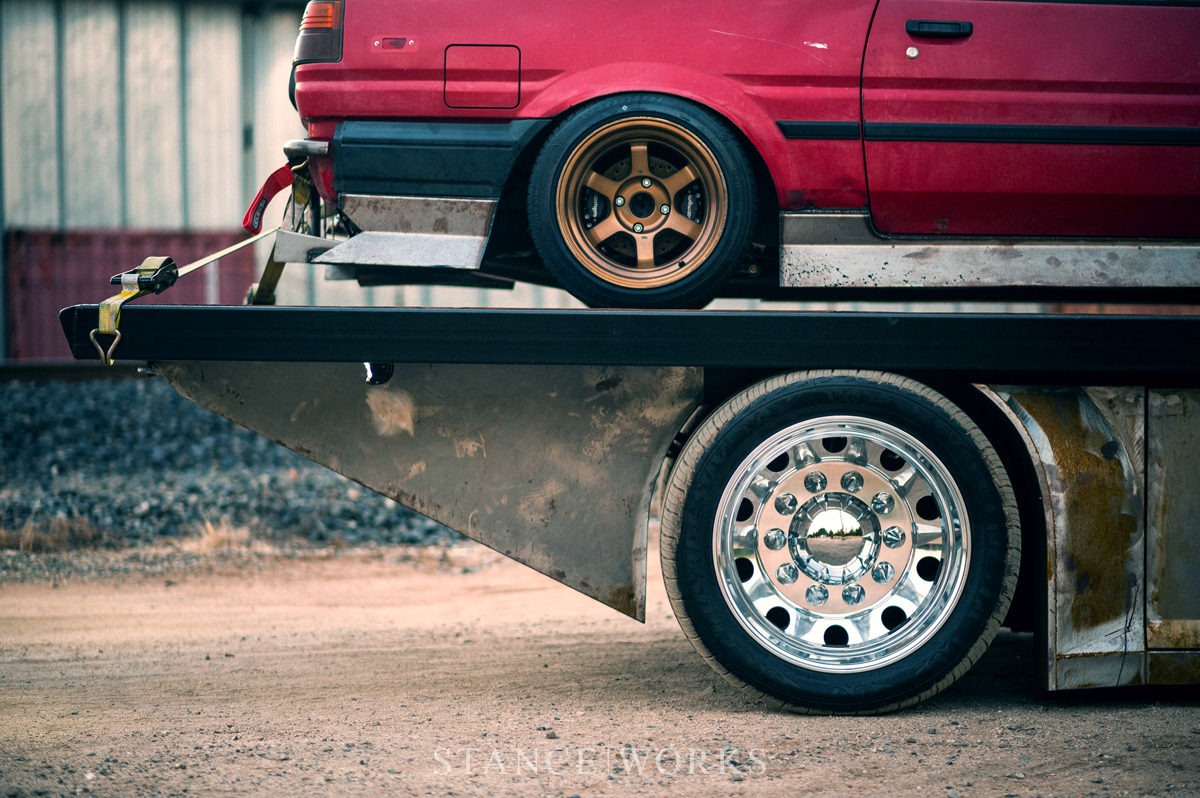 It's tough to pin down exactly what makes the Baller Hauler so exciting at first glance. It likely lies somewhere between its low-slung stature, the beautifully-done-but-yet-to-be-finished bodywork, and its inarguable resemblance to a Transformer. In reality, I'll give most credence to the latter, and the color-changing underglow only cements the image in my mind. I'll continue waiting for it to unfold and offer to take down Megatron. 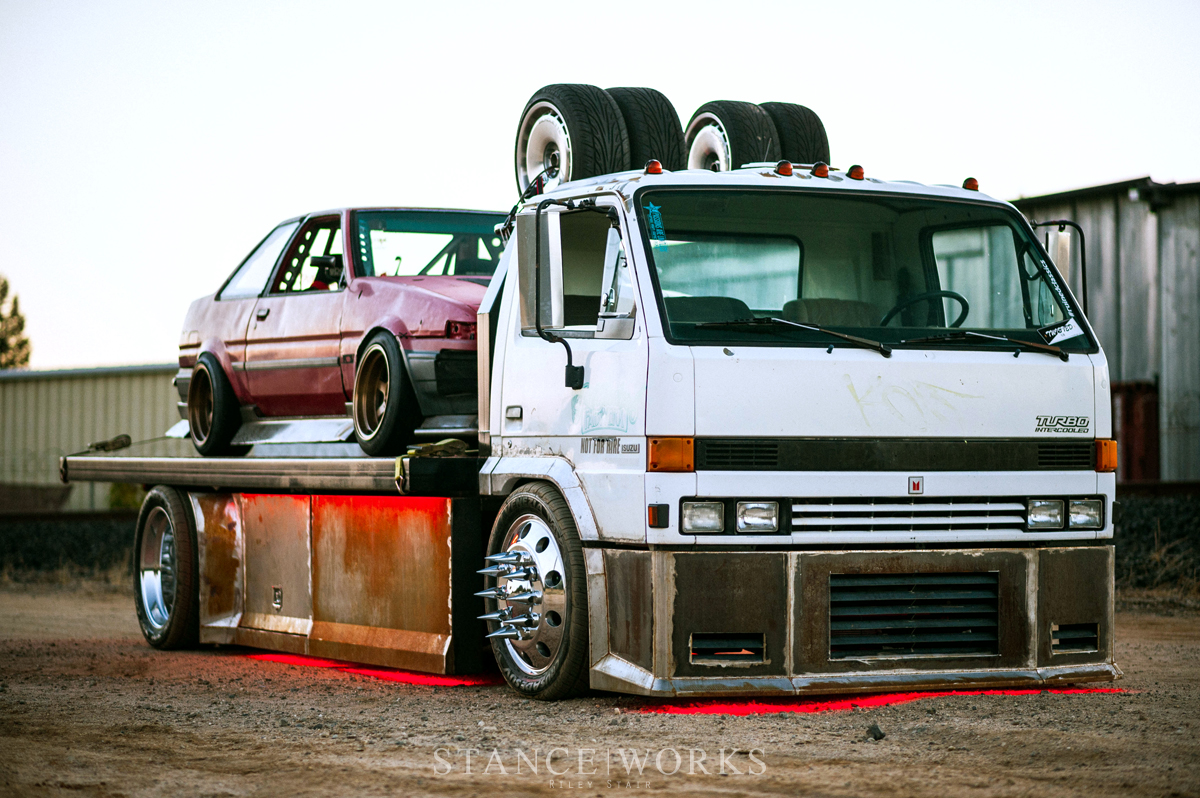 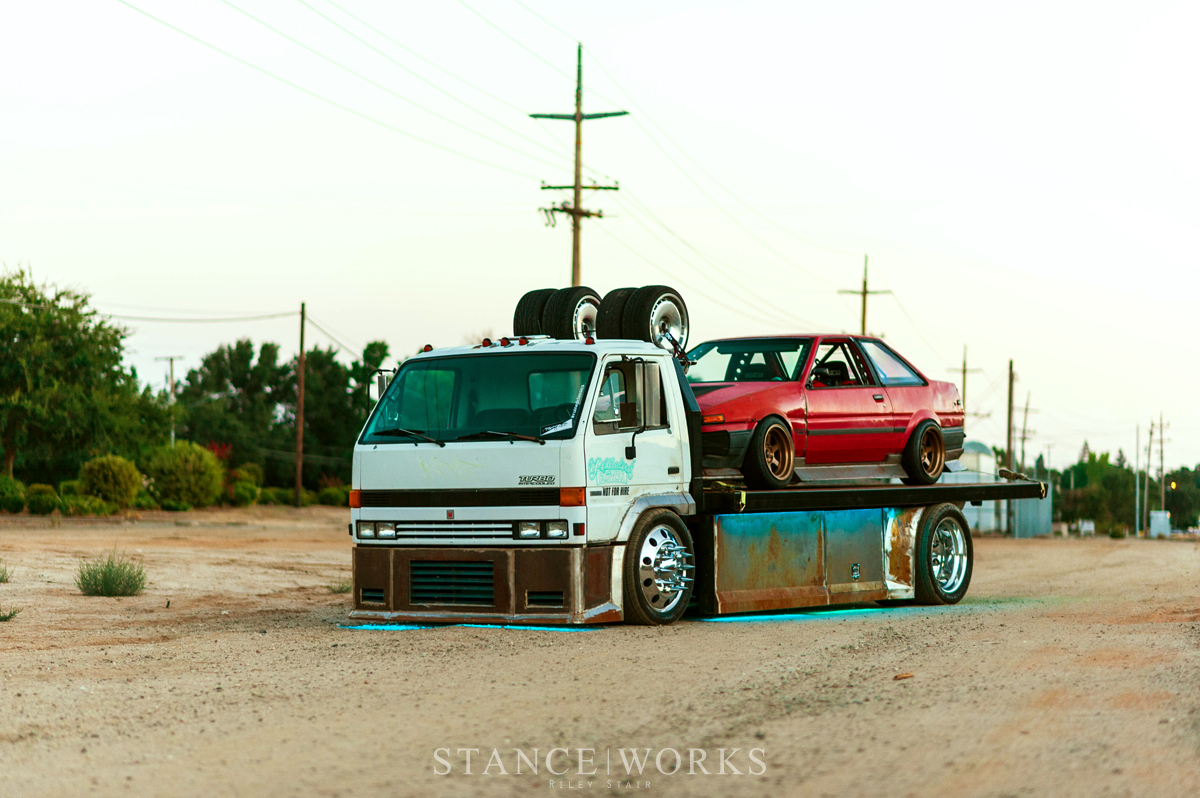 Okay, so that's not going to happen, I don't think. However, it does unfold to an extent... After all, this is a practical build, wholly intended to carry drift cars to and from the track, amongst other things. The bed tilts back to allow cars aboard, although many will wonder how any car could make the climb. Miles's creativity knows no bounds: even the lowest of cars are able to be loaded up. A long pair of aluminum ramps lay flat on the ground, and a car is driven atop them. From there, the ramps are hoisted into position by the bed itself, making for a flat, dovetail-free platform. It's hard to verbalize, but trust us, it's brilliant. Adding to it, a 9,000lb winch makes the legwork simple, and everything is operated by a key chain remote, making vehicles easy to load for Miles, even by himself. 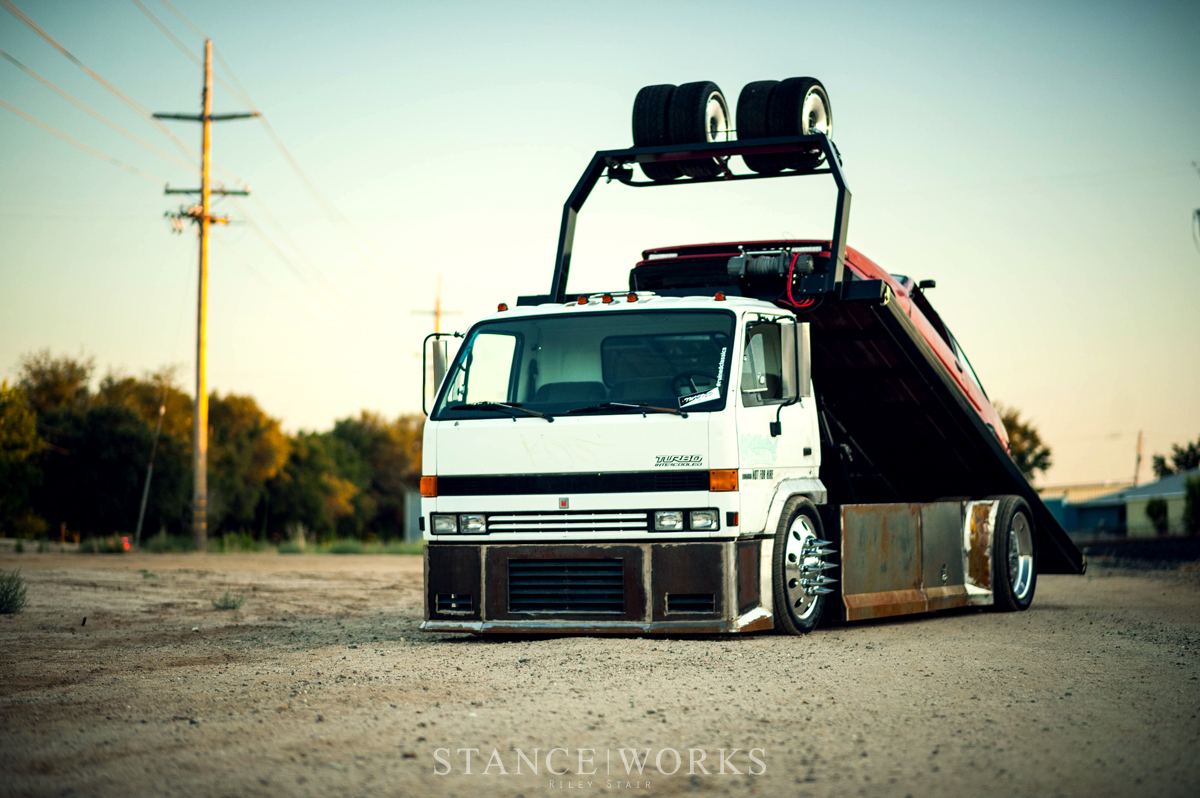 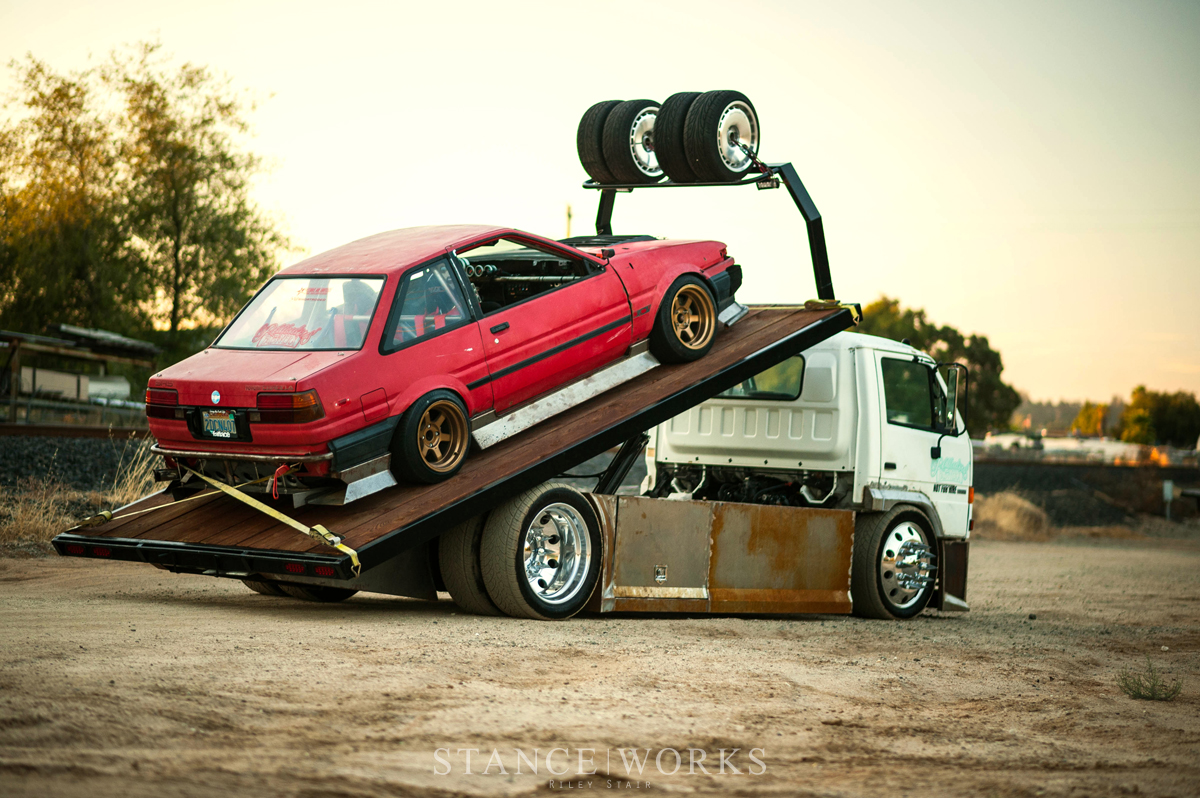 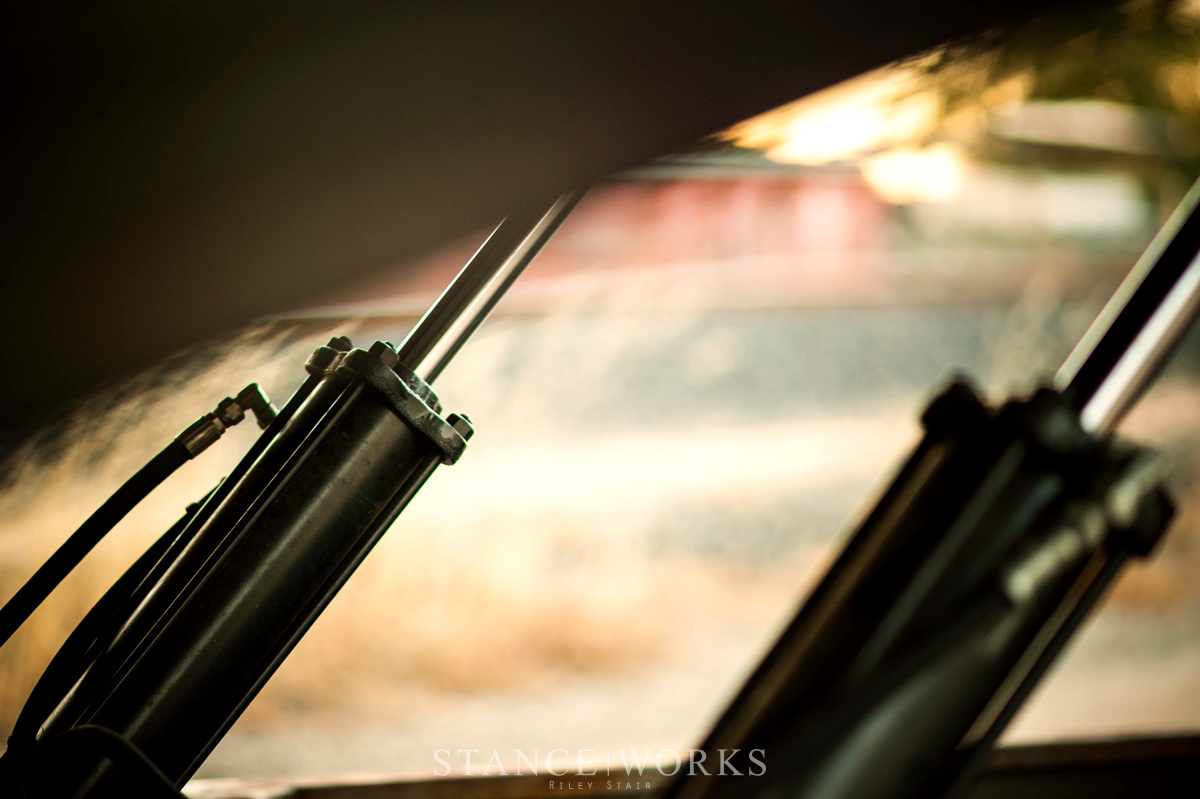 Continuing with the Transformer theme I've conjured, the cab tilts forward too, revealing the 6.0-liter LQ4 V8 he swapped in, which is backed by a 4L80E transmission, one of the best applications available for the job. Long tube headers with electric cutouts give the truck some serious tone on demand, but also give Miles the opportunity to drive in peace when needed. 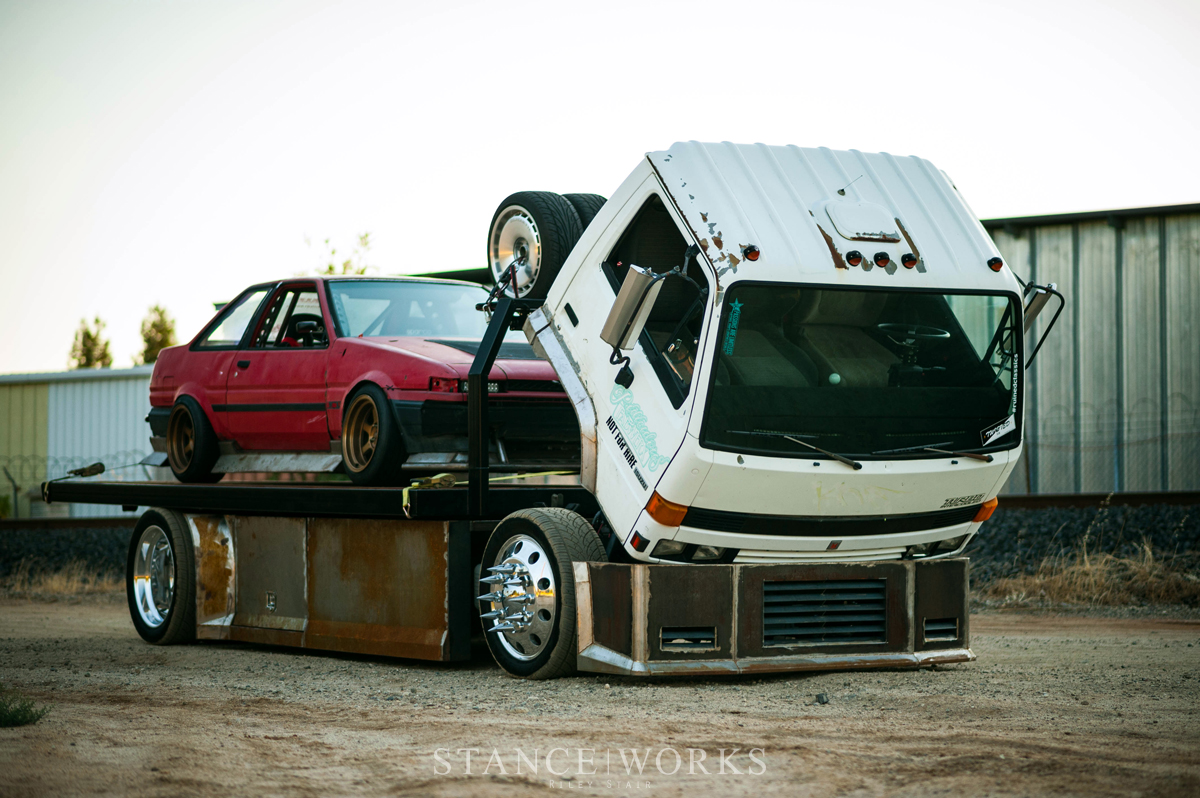 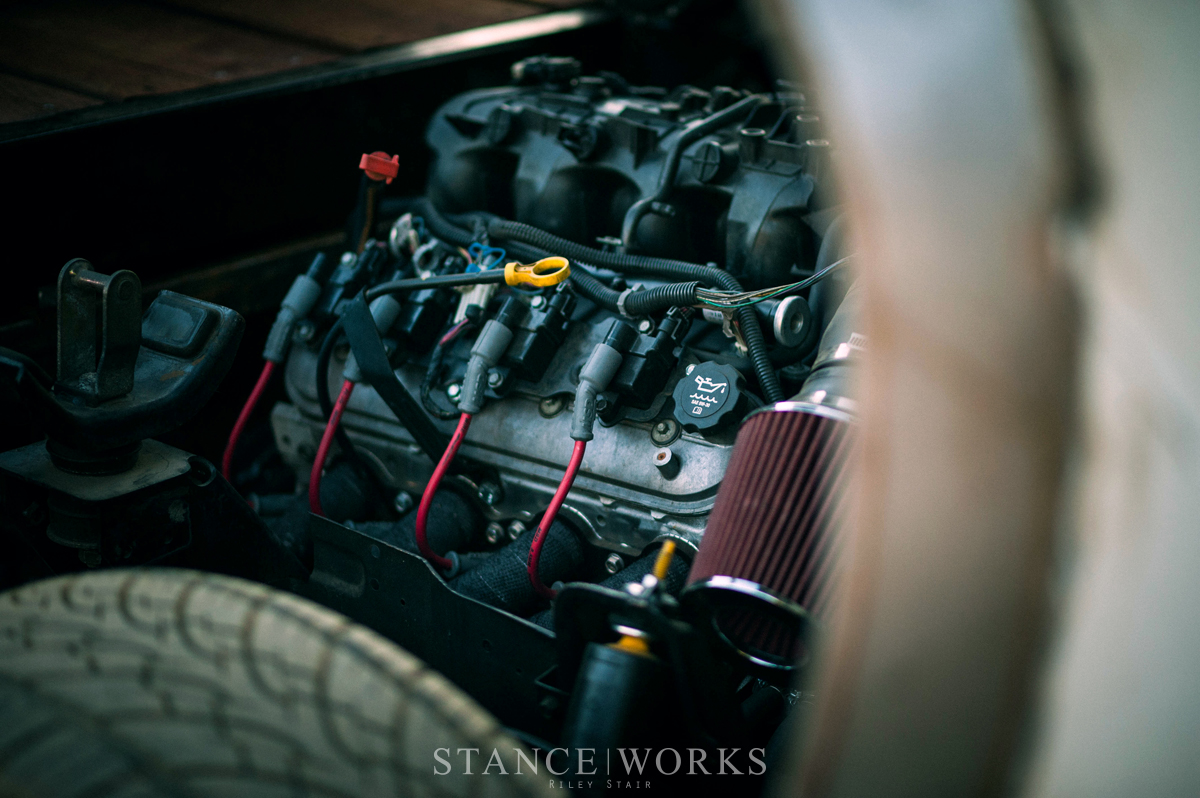 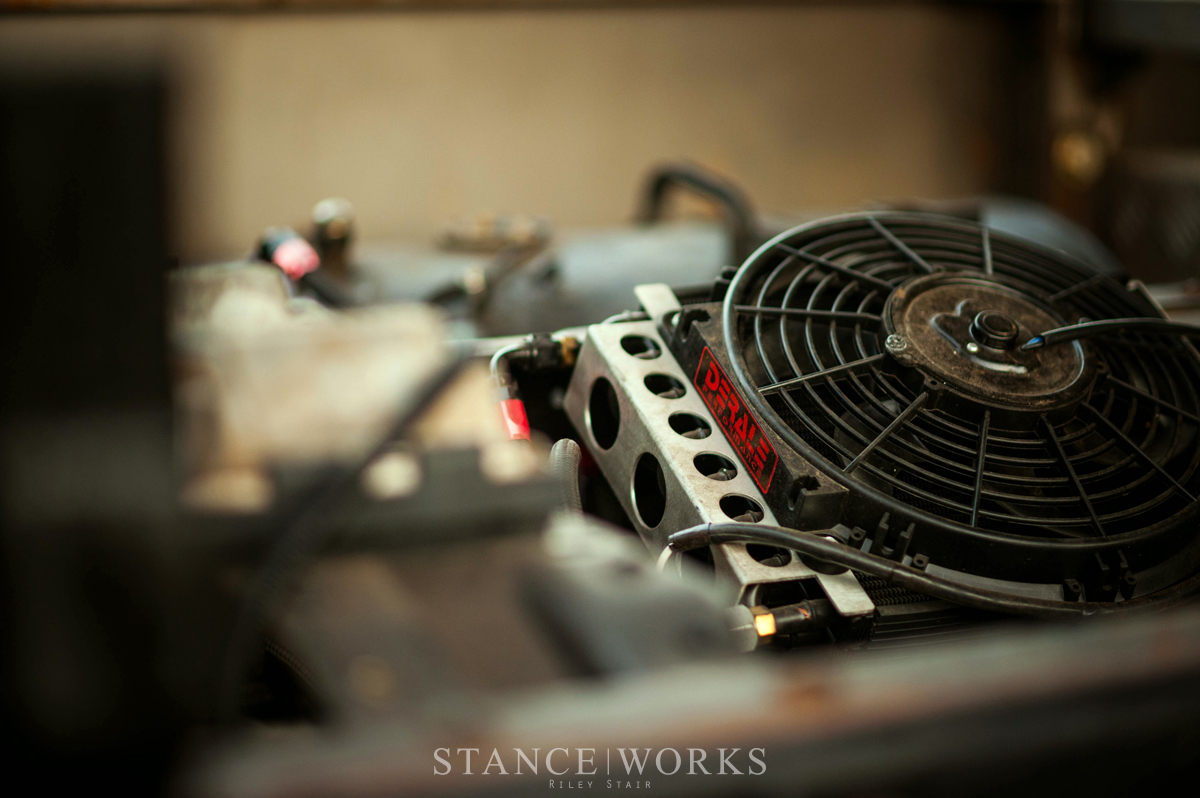 With the bed lifted and the cab tilted forward, the underpinnings of the truck are revealed. For the curious and the nerds, the wheelbase was lengthened a considerable 20 inches. An '05 NPR axle with a 4.30 ratio was swapped in, with a custom 4-link and panhard setup. A 2-link and panhard system keeps the front sorted. Custom-built 2-inch-solid 4130 chromoly sway bars are mounted front and rear to keep the truck steady and controlled, while bags on all four corners, supplied by Phil Blottie, give the truck both the towing capacity and the ride height Miles demands from his build. Management is thanks to Air Lift's 3H system, which helps balance the load depending on the car, or lack thereof, and air is stored and supplied by a set of FLO air tanks mounted under the bed. 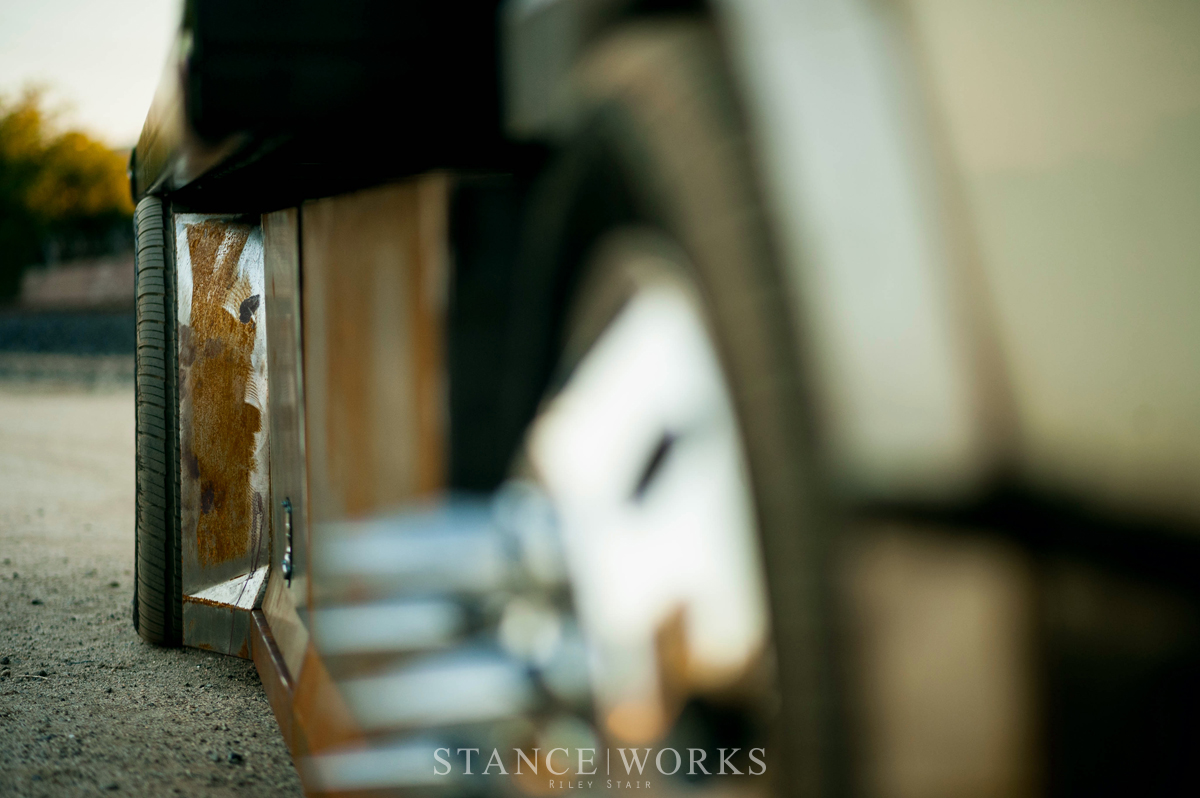 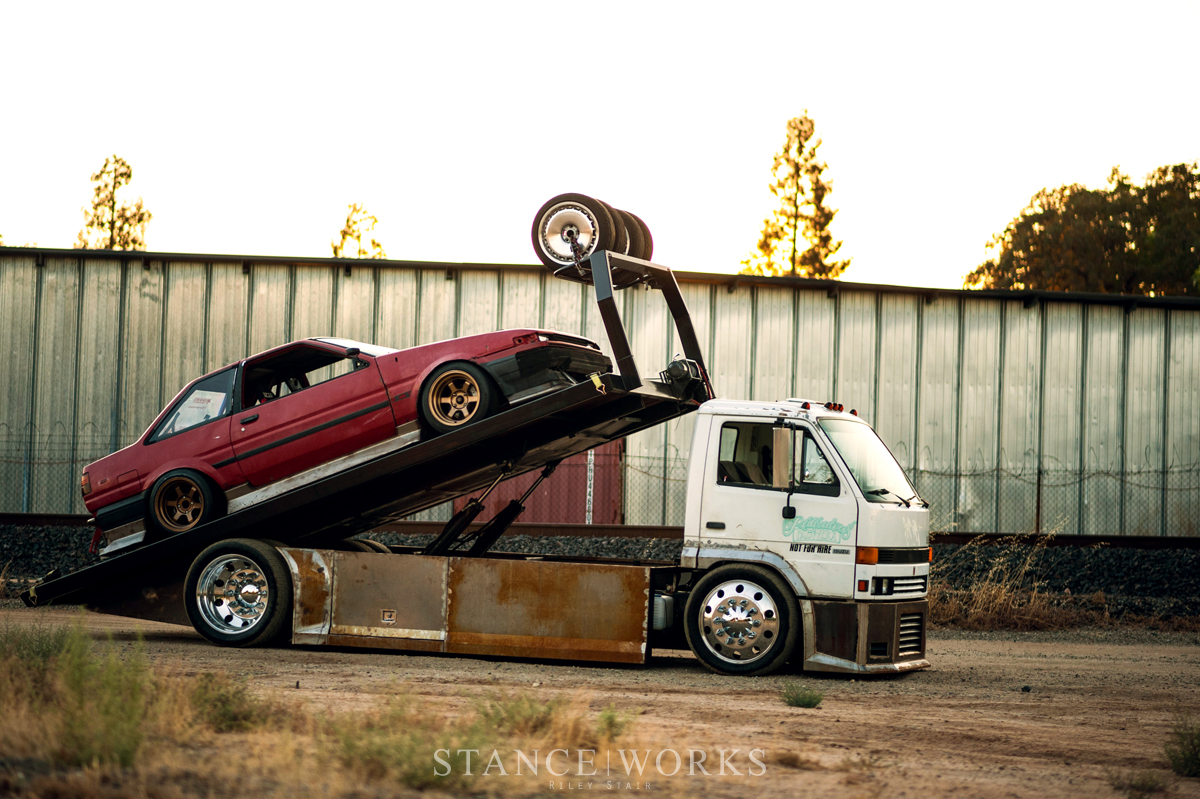 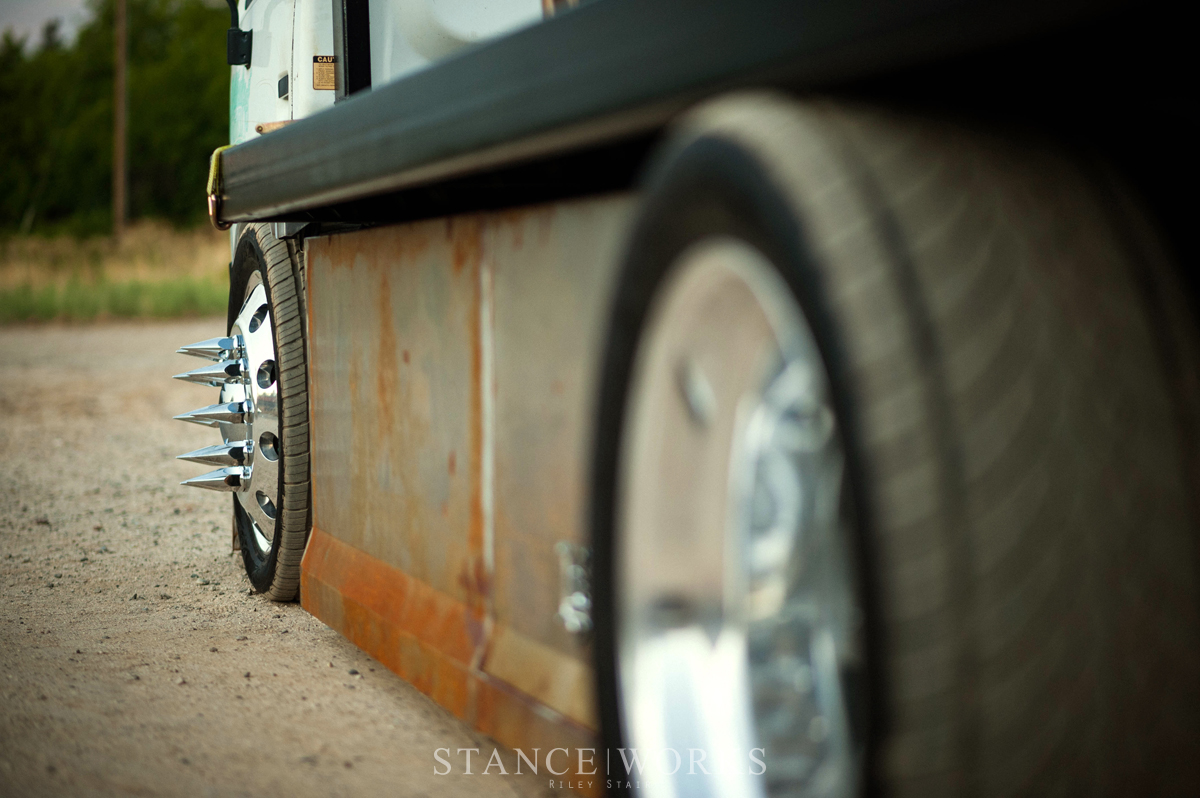 Inside the cab, aiming for comfort, Miles turned to friend Bob Grant to build a custom all-metal dash, which has been wrapped in suede, along with the door cards. Ford HVAC vents, custom gauges, and top notch stereo components were all installed too, modernizing the truck a bit, and making it a little less burdensome on long hauls. 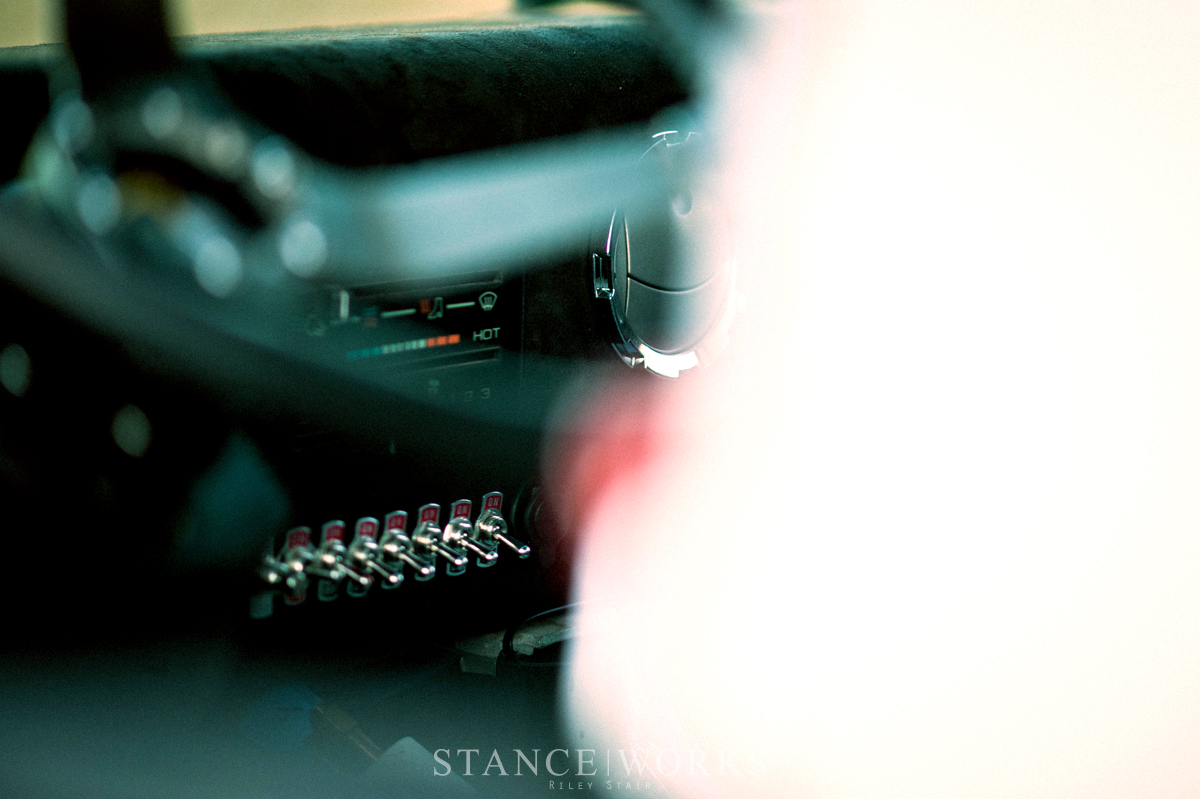 That of course brings us to the exterior of the truck, and its truly incredible body kit, also fabricated by Bob Grant. The cab was tubbed and metal flares were added to make room for the cut-down and polished 22" semi truck wheels. The bottom 12 inches of the doors were removed to facilitate the changes, and the new flared body line was continued down and across the bumper, as well as down the sides of the bed. In all, it makes for a custom kit that suits the truck perfectly, both in style and in simplicity. Grilles that mimic the Isuzu's factory slats were fitted to the front, helping the kit to look almost OEM. 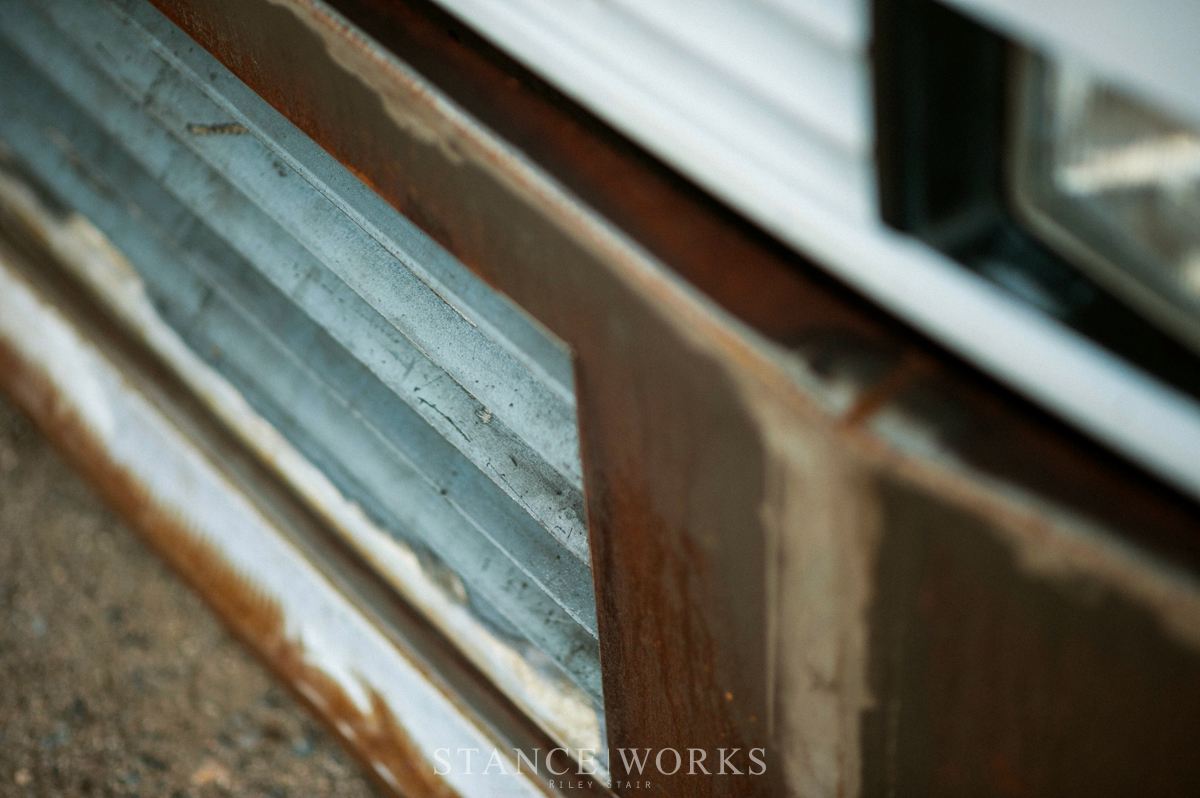 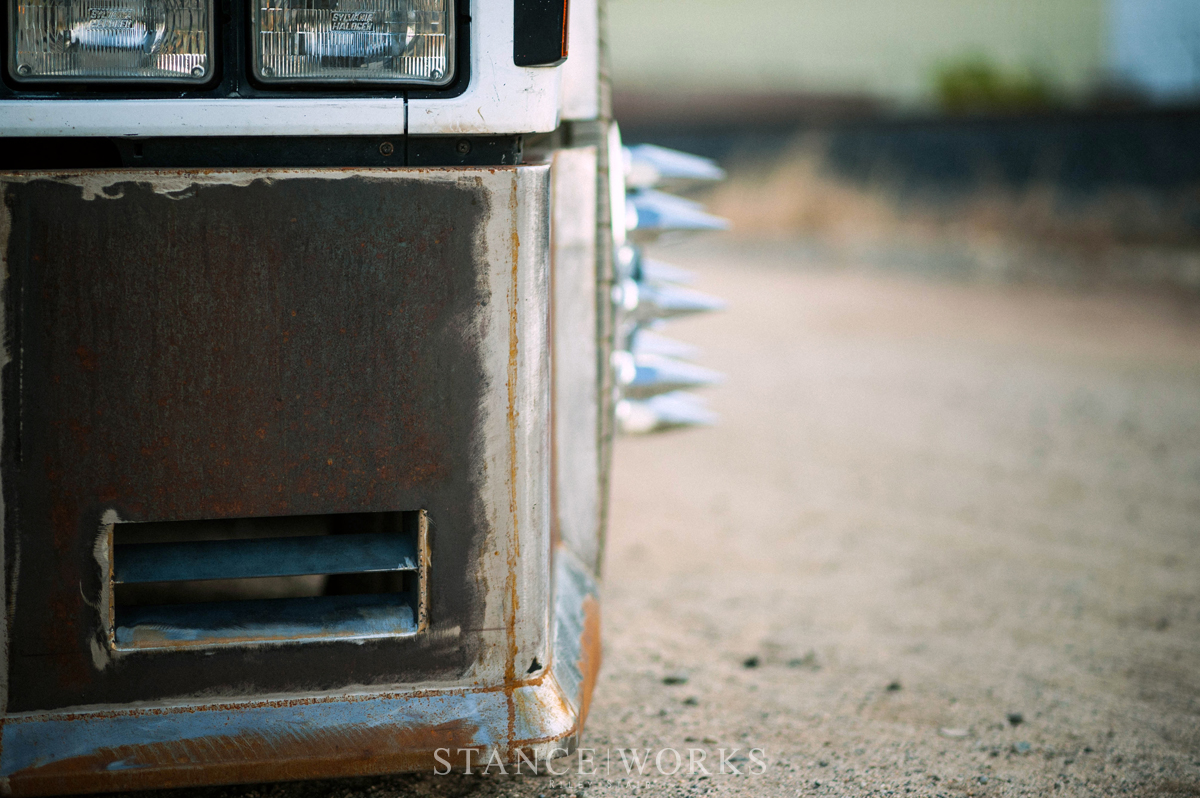 All together, Miles's "Baller Hauler" is truly incredible. There is, of course, more to come, too. There's paintwork to be done, a livery to be designed, and new wheels to be fitted. Continuing with the semi-truck flavor, 24" custom semi truck wheels are in the works. We're confident the list is always changing, but nevertheless, we're simply thankful to share the build as it progresses. In due time, Miles willing, we'll see it again. 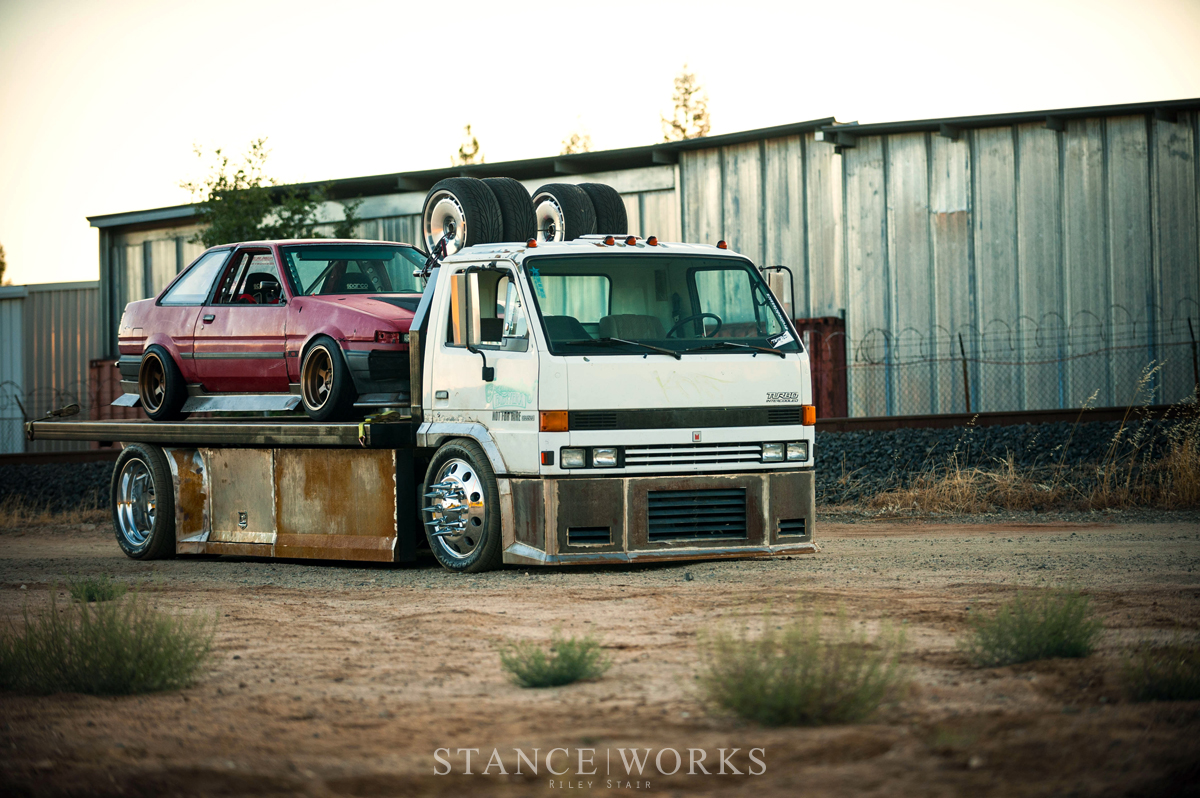