We're all on an automotive journey of our own, no surprise there. It's typically over time that we find the right car for us. What can be surprising though, is when the journey of finding the perfect ride takes an abrupt, unexpected turn. For Jack Williams, surprise is an understatement. His M52-swapped 520i is the result of boredom with an '08 Audi R8. Some may be shocked, but we'll stand on a limb and say he made the right decision. 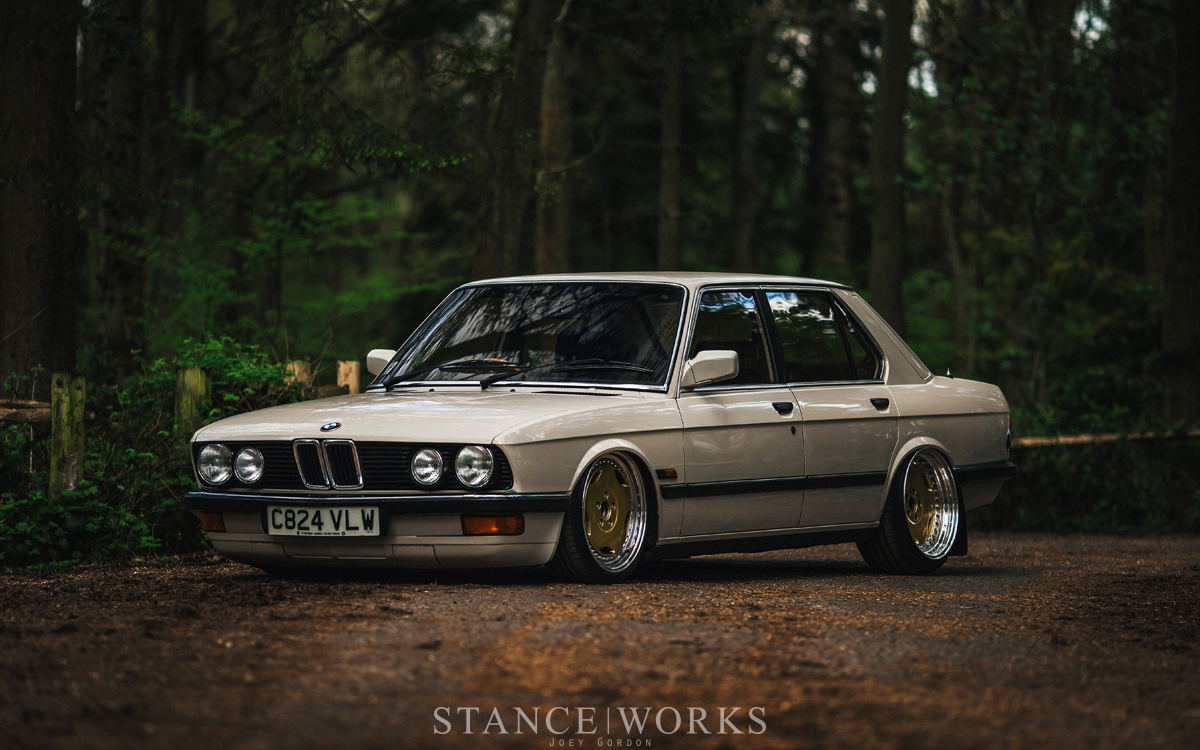 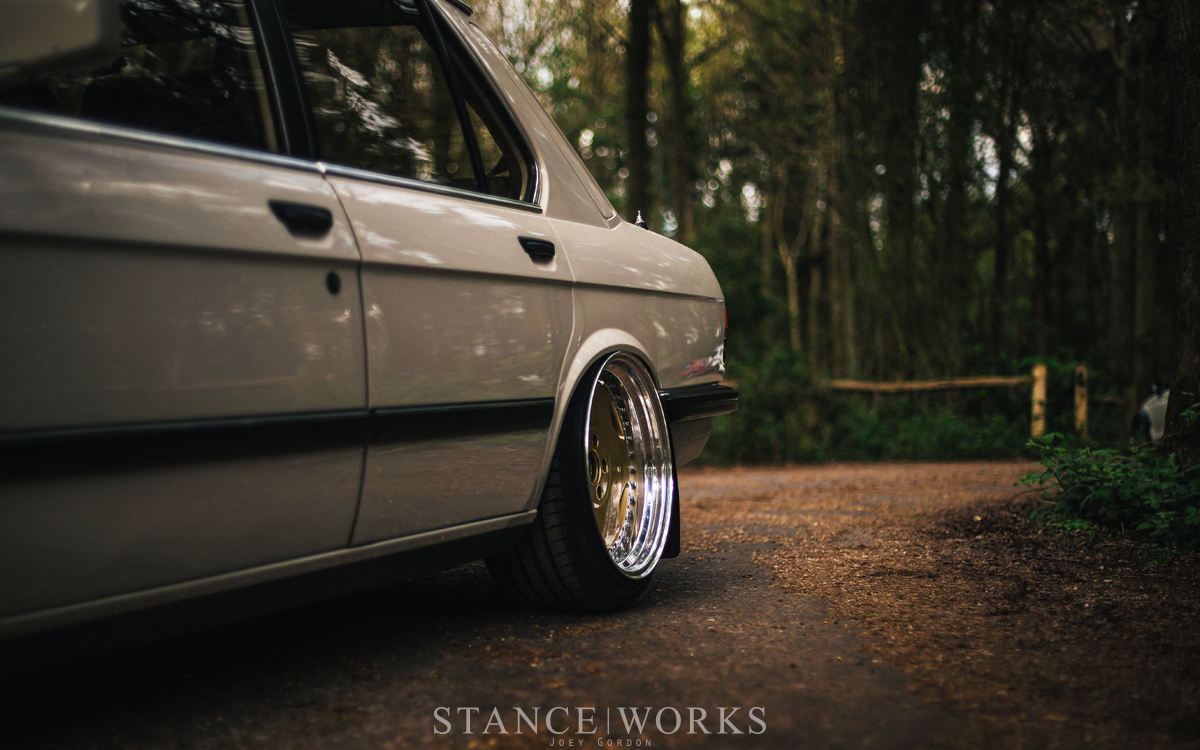 Born and raised in southeast England, Jack is no stranger to automotive enthusiasm. His father raised him on '90s Formula One and ensured his boy was raised with exposure to a bit of everything: his garage housed sports cars ranging from Supras to Camaros... It soundslike his father's journey wasn't so direct either. 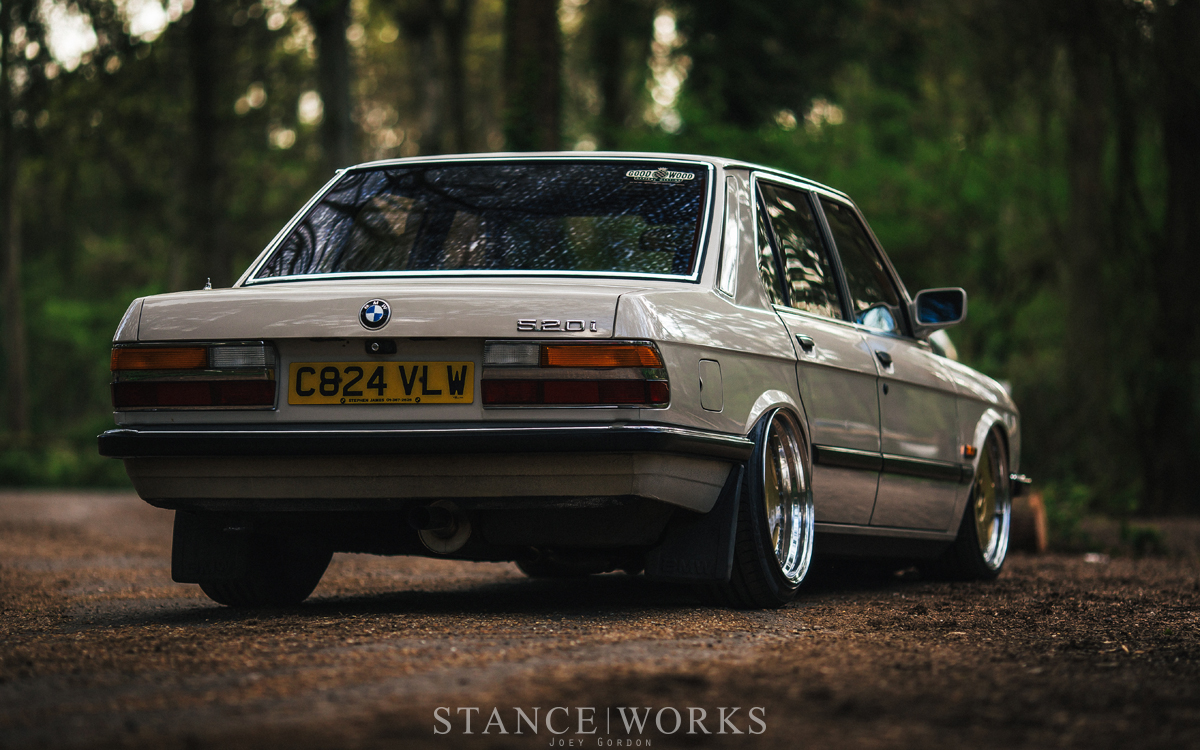 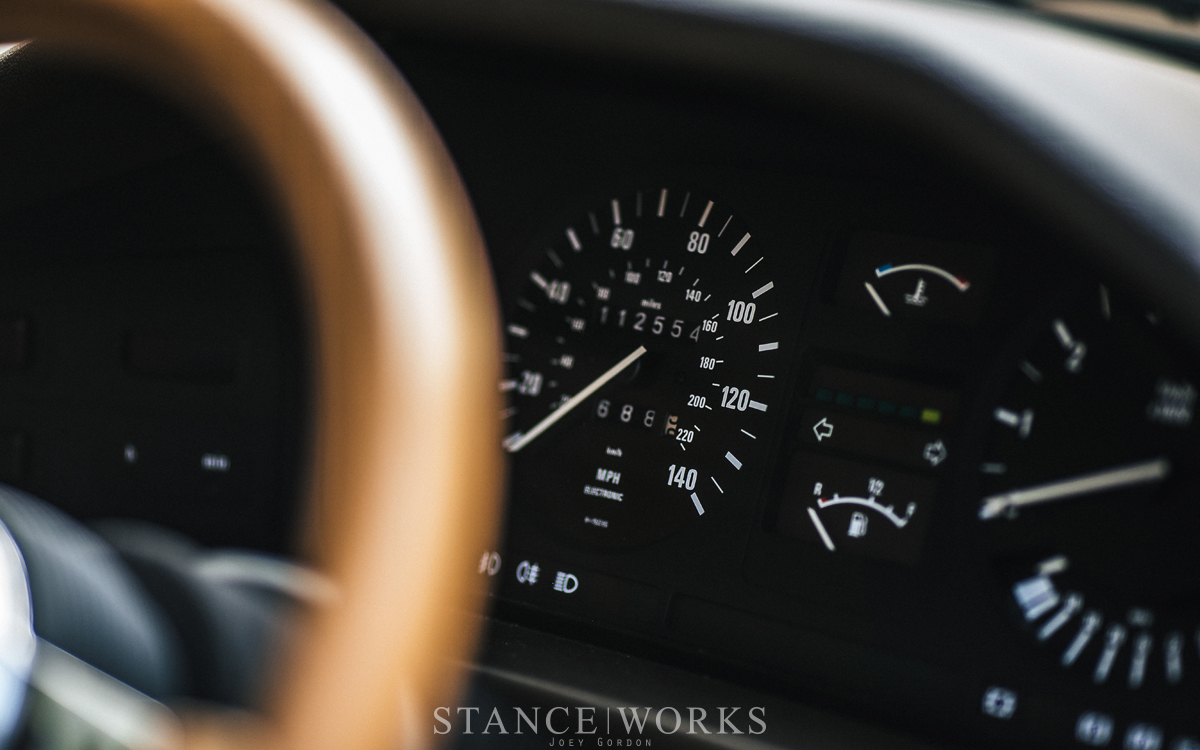 As Jack puts it, he felt the V8 R8 he was driving at the time lacked "character." In contrast though, Jack has always been drawn to the BMW marque. From its racing pedigree, to the iconic shark nose styling, and even a bit of the chavviness of the M3 lineup has earned a place in his heart. In truth, it's the E24 M6 that he places atop the pedestal, but its long hood, enormous overhangs, and tiny cabin make it a bit less than ideal for daily driving, so he turned to the E28 chassis to replace the exotic that sat in the garage. 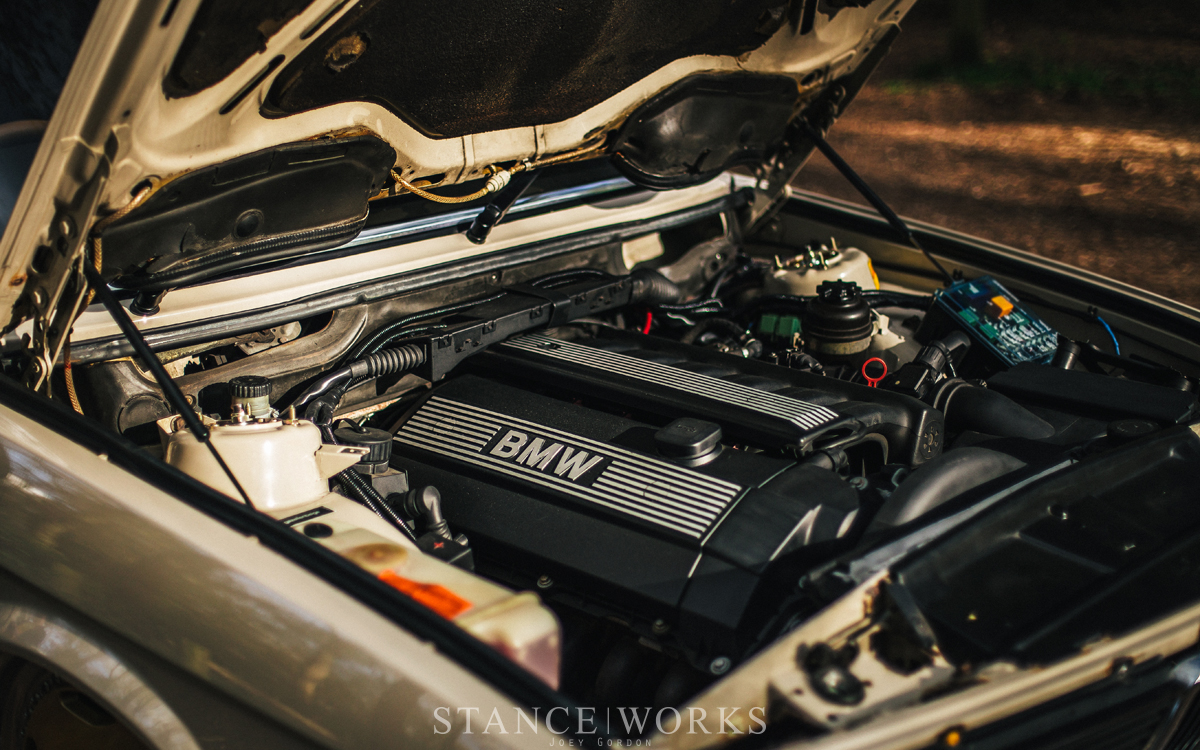 With initial plans of buying a car to swap in an S52, Jack was on the hunt for the perfect donor. As luck might have it though, a perfect example surfaced, and fortunately for him, it had an M52 under the hood. The '86 GazellenBeige 52oi was in seemingly perfect shape, so Jack, his brother, and a friend grabbed their wallets and magnifying glasses, and hopped in the car for the 11-hour round trip drive to see it, the very same day he found it. 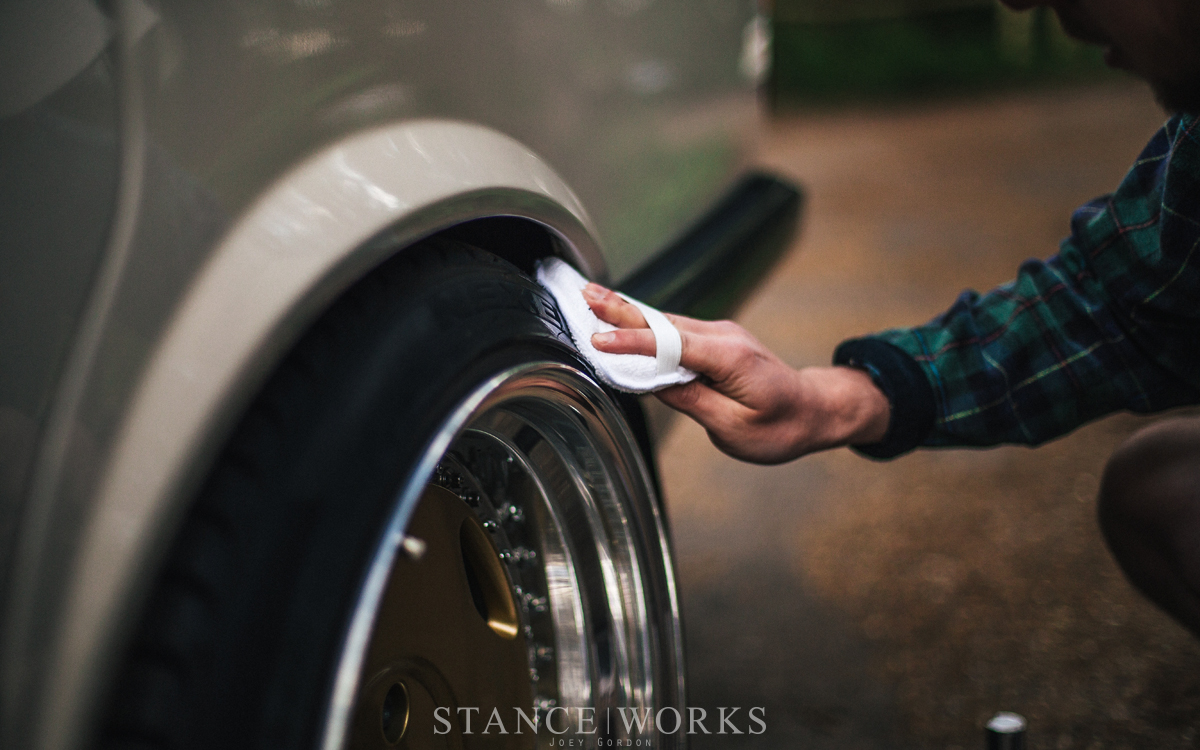 Within minutes of arriving, Jack knew this was the car he wanted. He looked the car over, and chatted at length with the owner, Simon. "I knew how much it pained Simon selling the car - I must admit its not nice seeing a grown man with glazed eyes saying goodbye to his beloved car and im sure ill be the same when my time comes to an end with this beautiful car," Jack says. 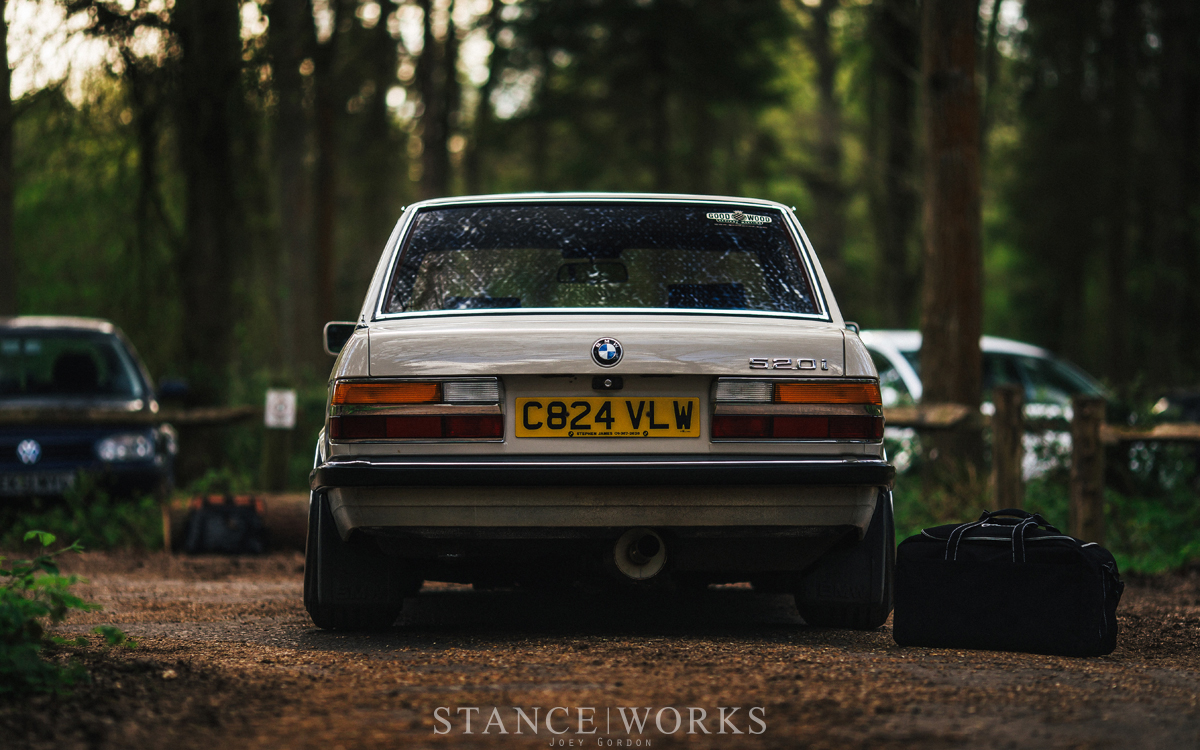 Without hesitation, Jack bought the car, and found himself with a prime example, complete with a binder full of paper work and a complete original tool set. Diving in to what counts, the engine swap was done by Pristine Coachworks. Mods like an M50 manifold and a complete exhaust give the engine a bit of a bump in power, while a complete E36 fuse box replaces the awful original E28 unit - a glorious improvement for any E28 enthusiasts. The package as a whole nicely modernizes the otherwise dated chassis, giving it the power needed to hang with modern commuters, and then some. 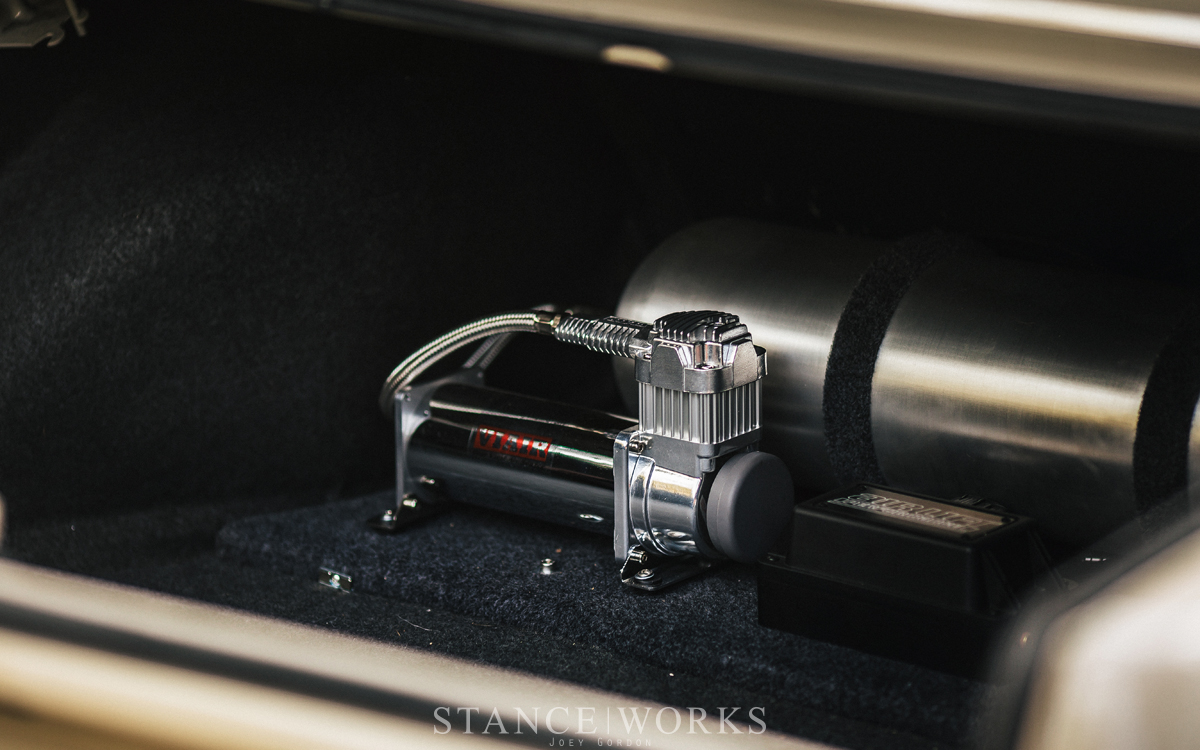 To give the sleeper looks to match what is under the hood, he turned to airride, and his friends at Intermotiv suspension. Catering specifically to the build, the E28 was weighed and measured. A set of custom-valved 32-way adjustable monotube dampers  were built for the car, and then mated to bellows bags, front and rear.  Jack tells me, "the idea was to optimise the handling and grip while keeping the ride comfortable enough for her majesty's somewhat "unique" carriageways." 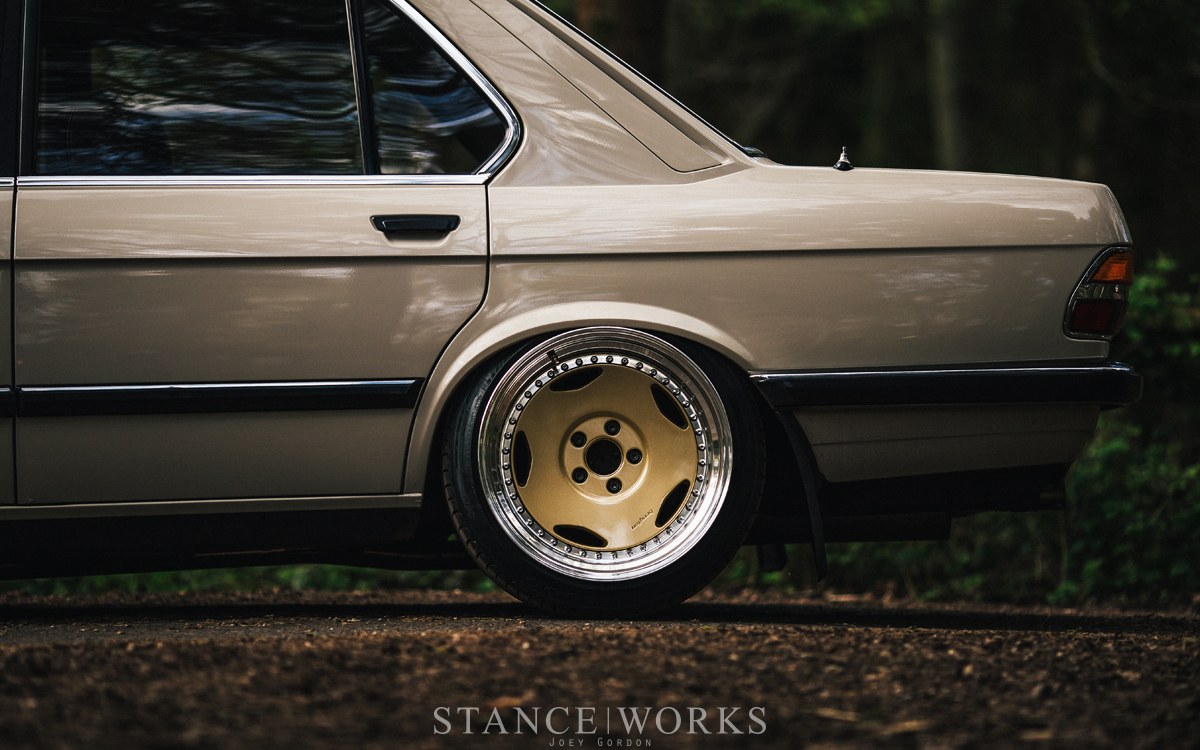 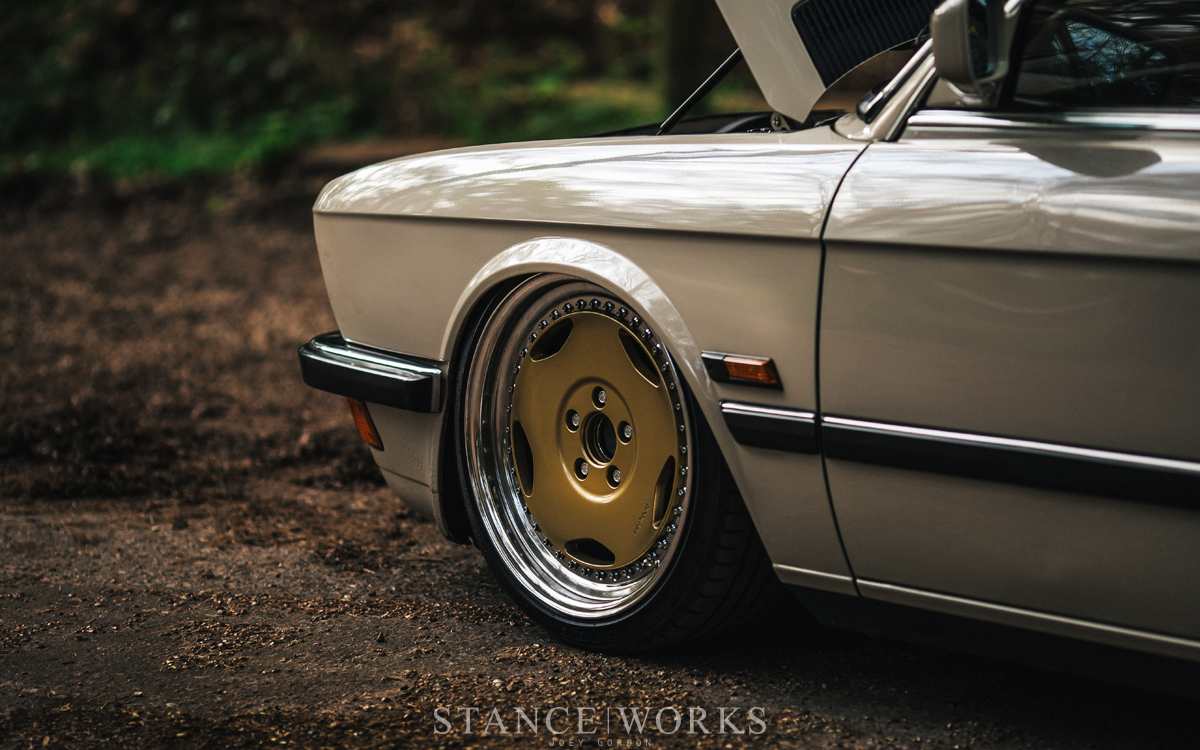 For management, and to keep the car usable, Jack turned to Air Lift Performance and their 3H system. As an evolution of their famous "V2" system, the 3H system incorporates all of the advanced technology of their 3H system with the simplicity of classic, pressure-based digital control. This of course allows him to fine-tune the ride height, and when wanted, he can set the car right on top of the 18x8.5 and 18x10.5 OZ Breytons. The 205s and 225s tuck nicely into the fenders, and new SRR hardware for the wheels has them shining like new, despite their antiquity. 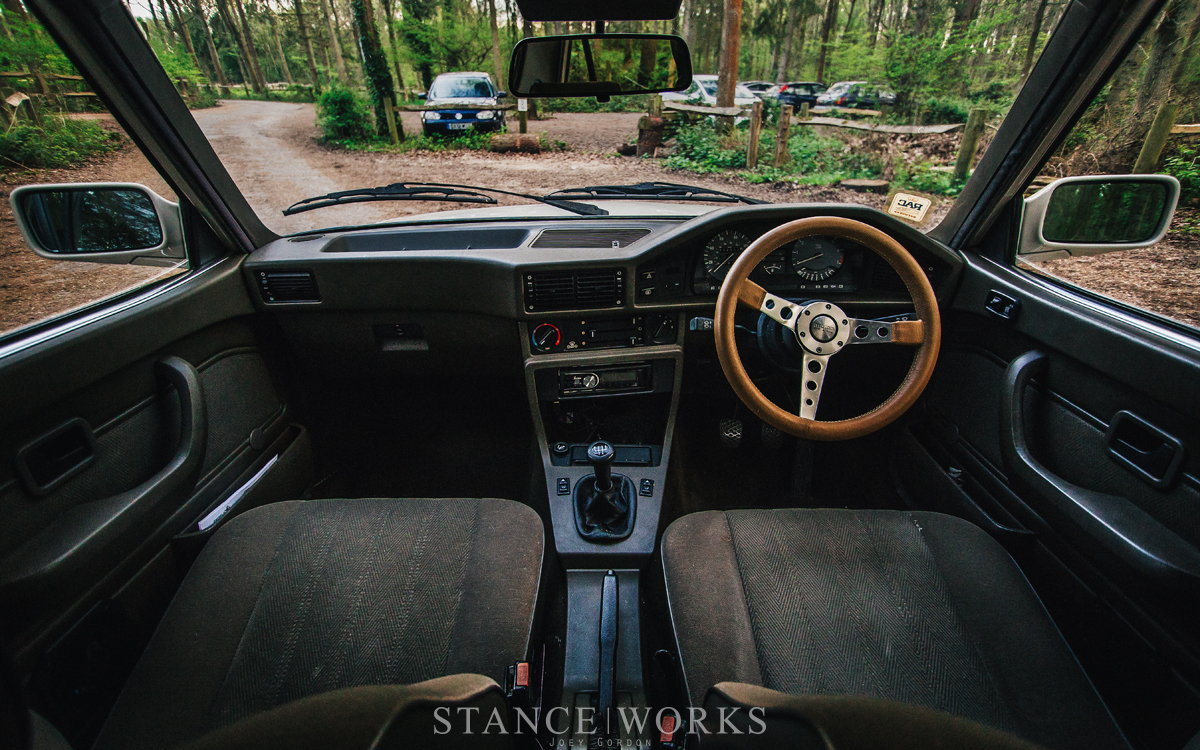 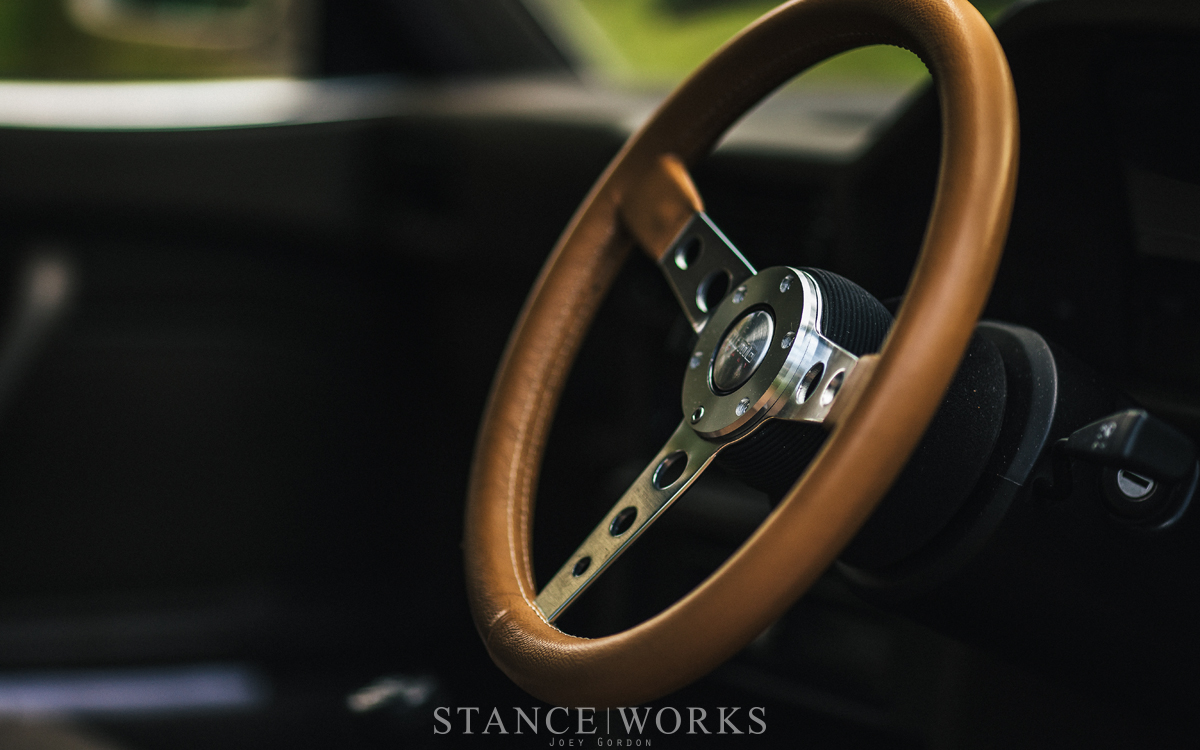 The gold wheels against the beige paint is a unique choice, but one that's rather classic. It plays well off of the brown interior, which has remained in remarkable condition for its age. Not wanting to disturb things, the only change made inside has been the addition of a Momo wheel. Original tweed seats show their age, but exhibit the same old school style as the rest of the build. 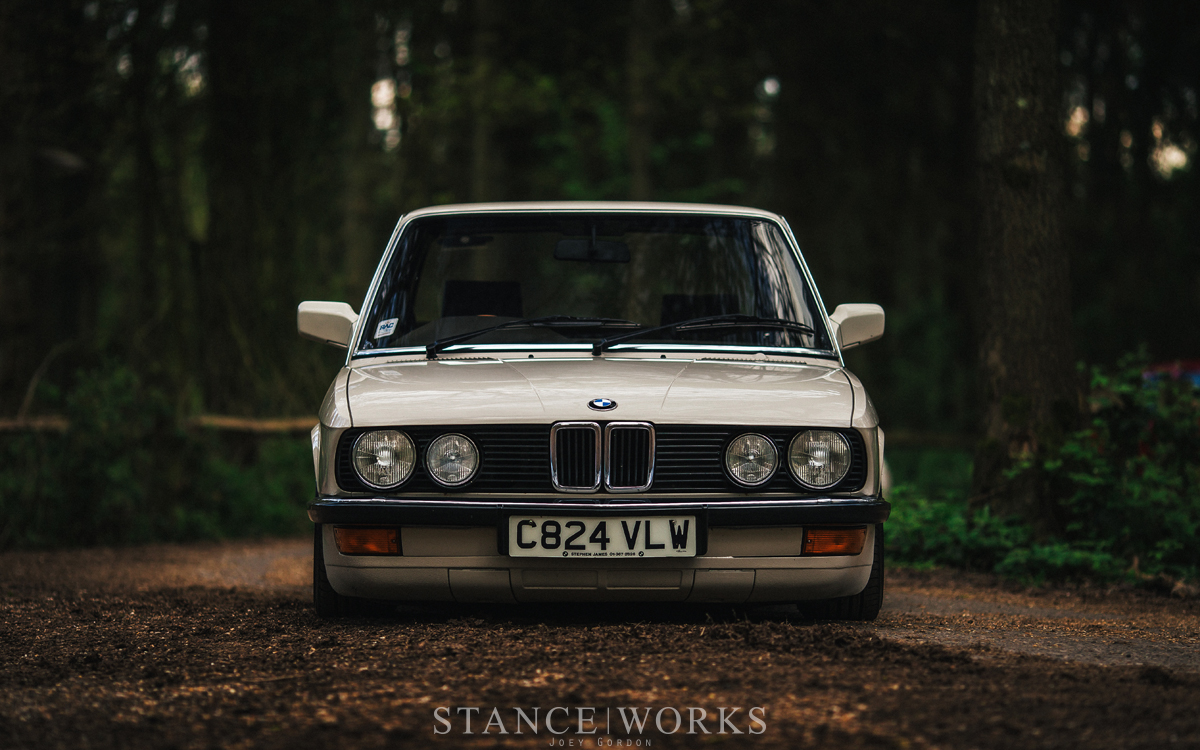 As for how it drives? Well, of course. As well as an R8? That's for Jack to answer. But he'll happily tell you it doesn't have the same lack of character, and we'll agree with a heavy bias. So keep an eye out for it in southeast England, and perhaps you can spot the changes he's got in the works for next year.