Behind the big desk at H&R sits Roland Graef, a man who's enthusiasm for classic BMWs is paralleled only by our own. The desire to build an E28 or E30 all his own has been growing for years, and fittingly, so has a large collection of parts for such a build. When Bob Tunnel from BimmerHaus mentioned that a long-time client was selling a 318is, Roland's momentum began to build. 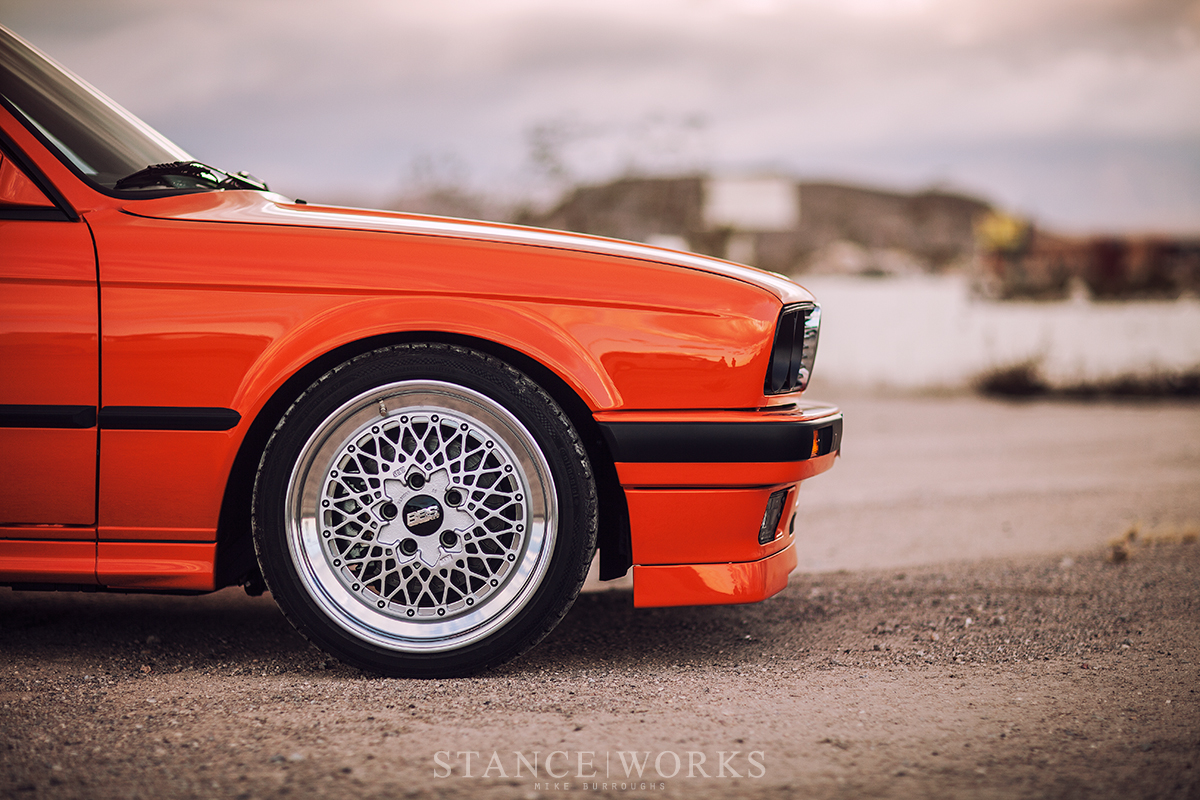 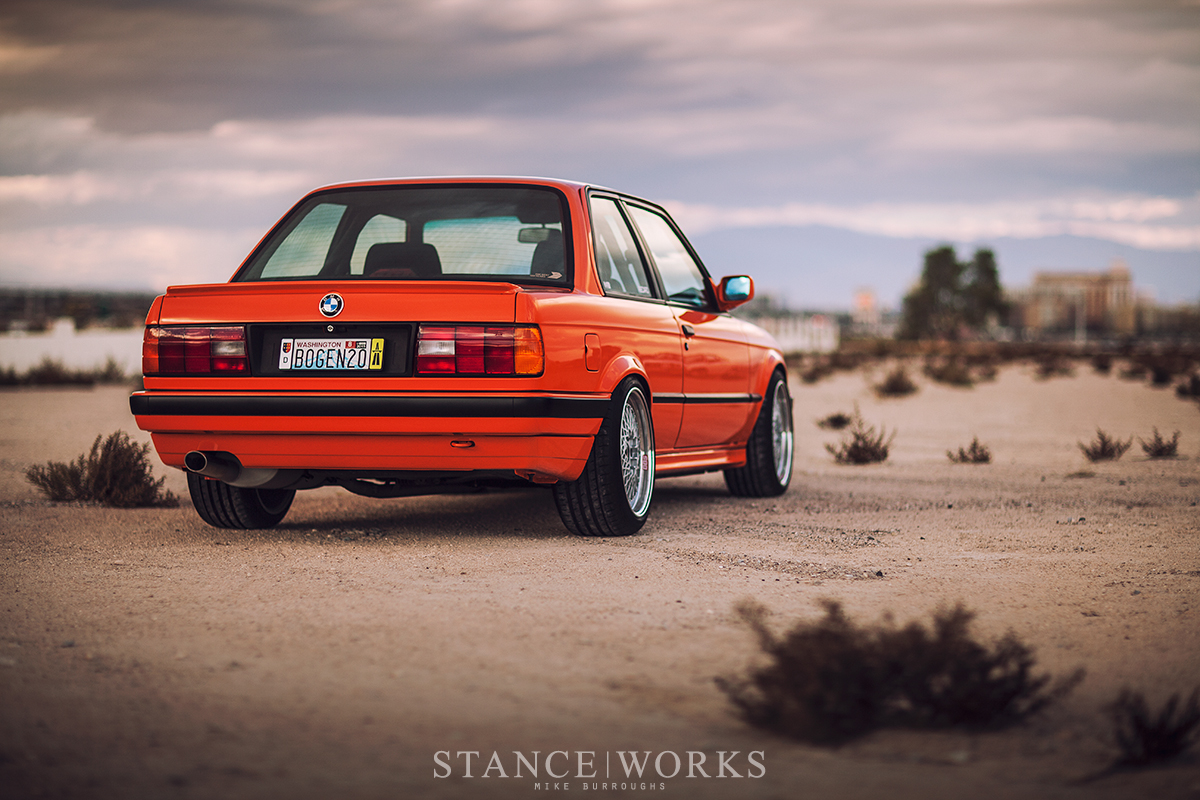 After Roland purchased the car, Jim Leithauser from BimmerHaus got to work, and began following Roland's plans by removing the complete drive train and replacing all the worn or “old” parts. The engine and driveline parts that would return to the car were all meticulously detailed, while the subframes sat in the oven, curing a new, shiny powdercoat finish. With all of the parts removed and the interior stripped out, the remaining shell was sent out to Howard at Tri-Star Enterprises for it's makeover. 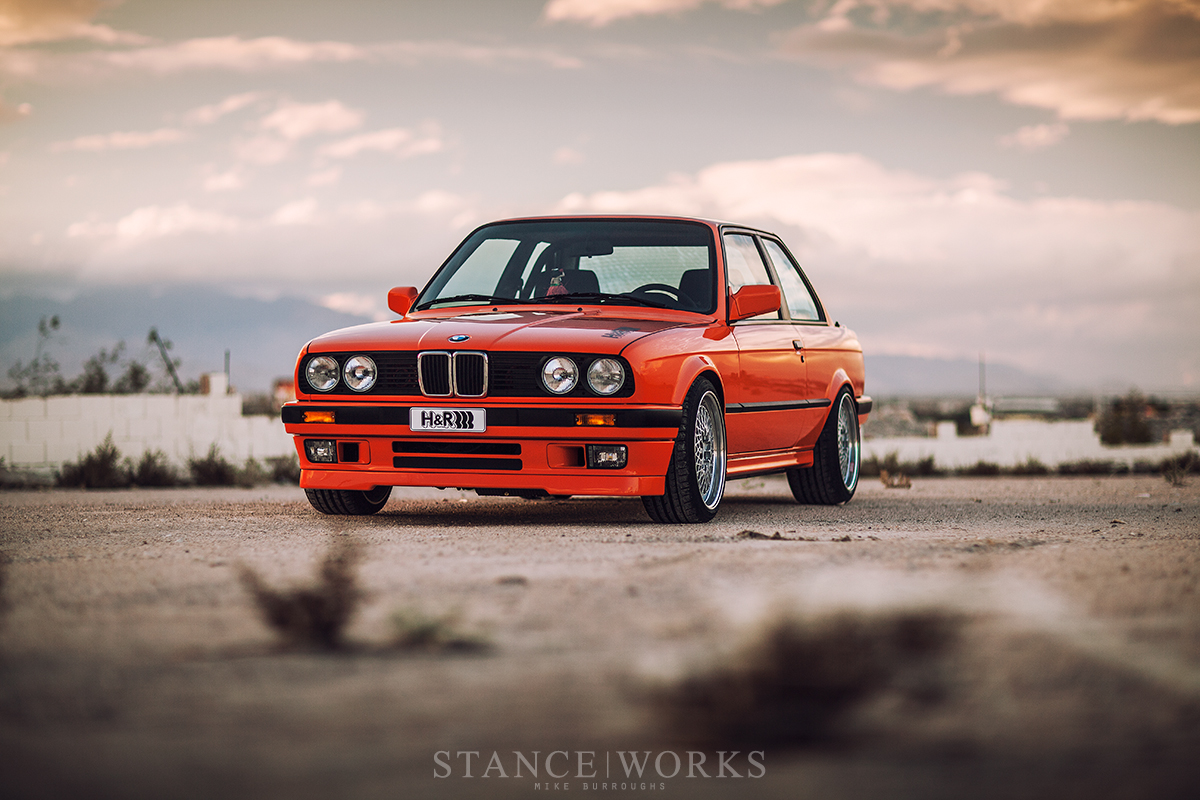 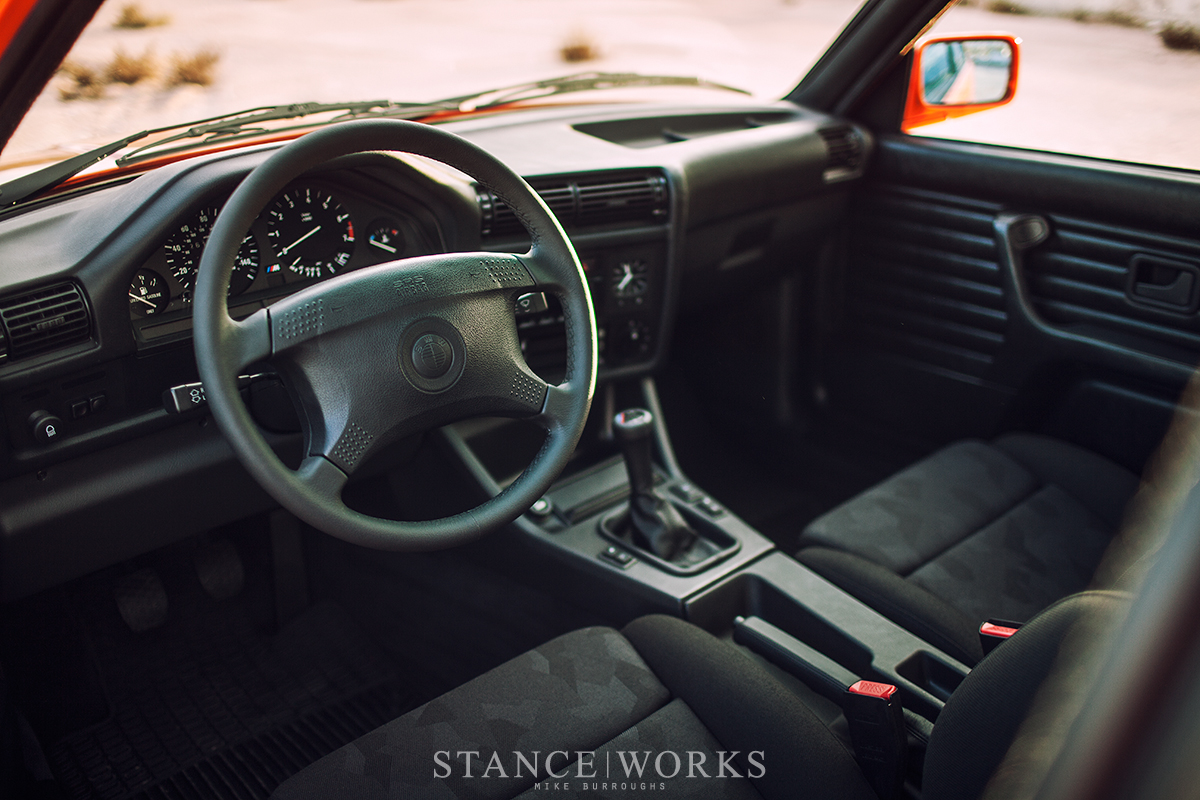 In efforts to revitalize the old E30, new fenders, front and rear valances, a trunk lid, and a brand new hood were installed. Careful scowering of the remaining bodywork turned up the expected dents and bruises that accumulate over 26 years on the road, but Howard's expert hands quickly returned the E30 to its original glory. As soon as the lines were straight, they received a bright coat of Feuerorange II, color code U94/2. A color often found on the limited edition Lime Rock competition M3 of recent years, it was the perfect modern touch on the E30 that still harked back to the Jagermeister liveries of the E30's DTM roots. 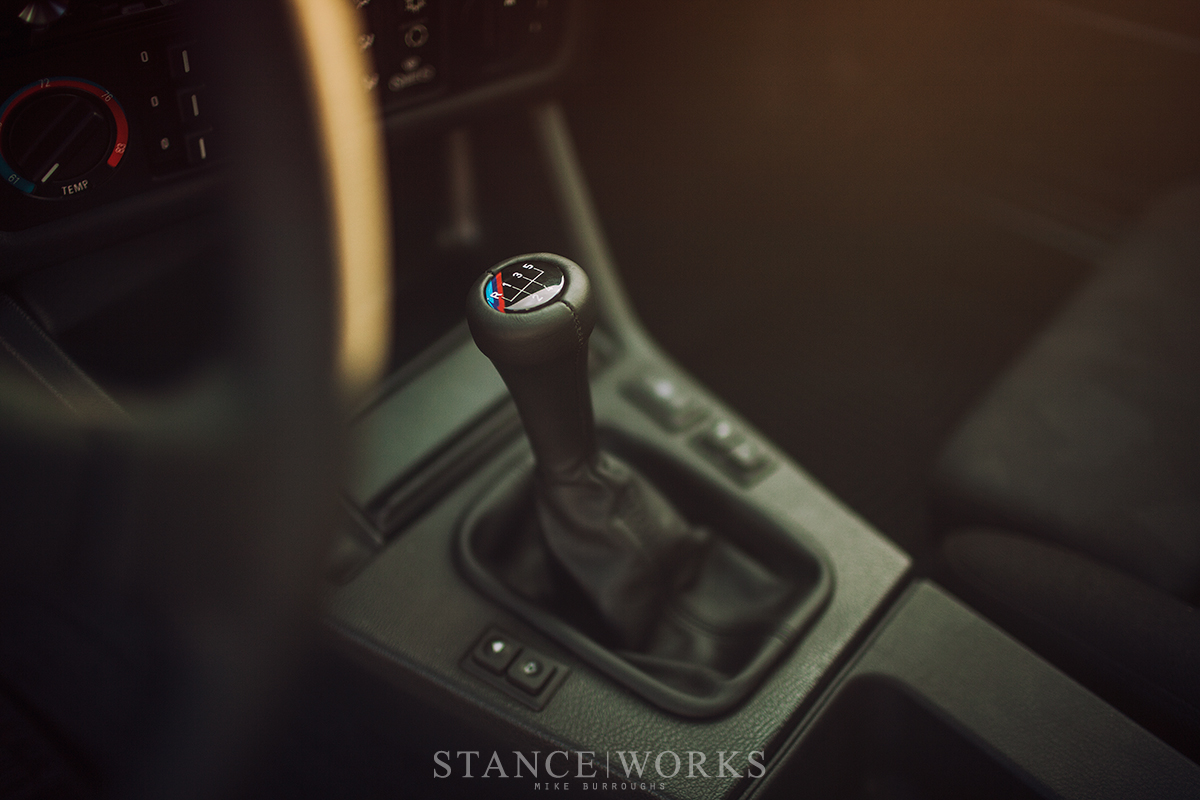 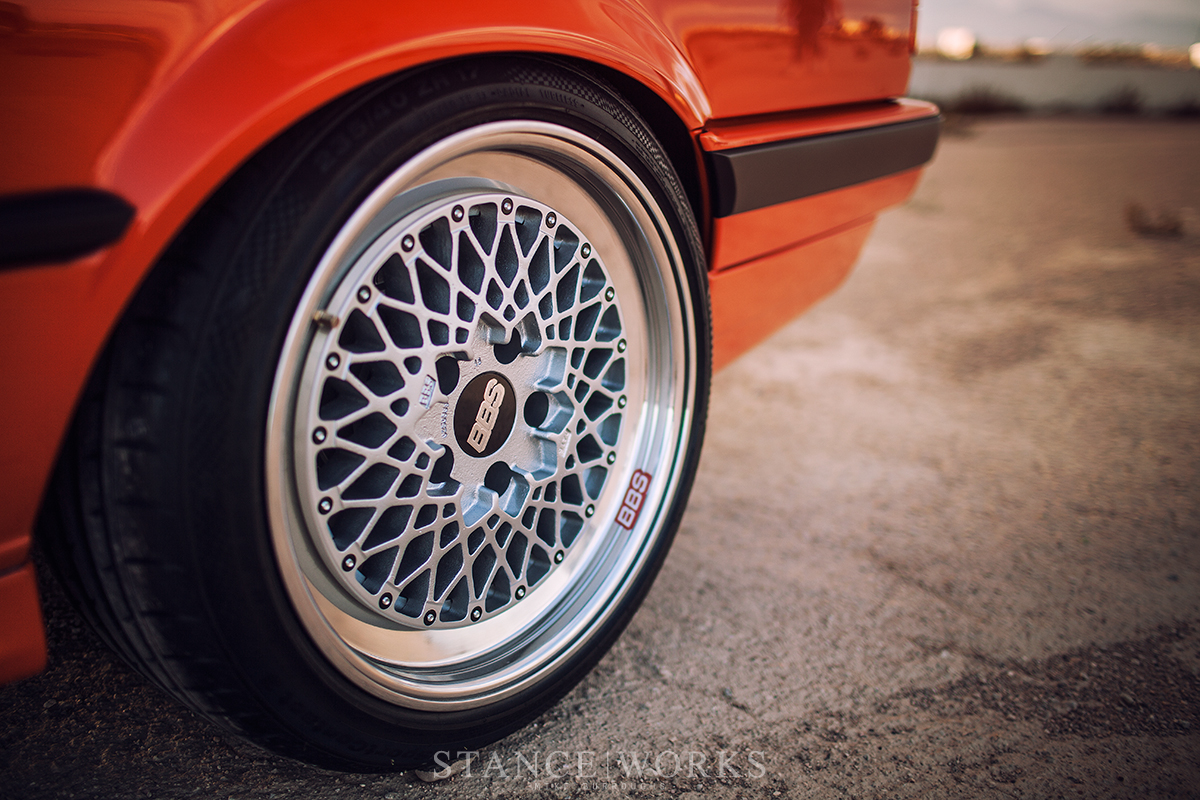 With the body completed, it was time for reassembly, and Roland was set on returning the old 3-series to its original glory. Nearly 800 new parts were sourced to replace those that had grown old. Roland reached out to Jason Gannet at Turner Motorsport to source bits, pieces, and compoents, and he nearly overloaded the inbox of Jim Kosturik at BMW of Westmont as he hunted for the little knick knacks that he'd need to see his dream to fruition. When it came to some of the specialty items, Roland turned to the wealth of information in the ECS Tuning archives. With the exception of the aftermarket performance parts, only genuine BMW parts were used in the restoration. 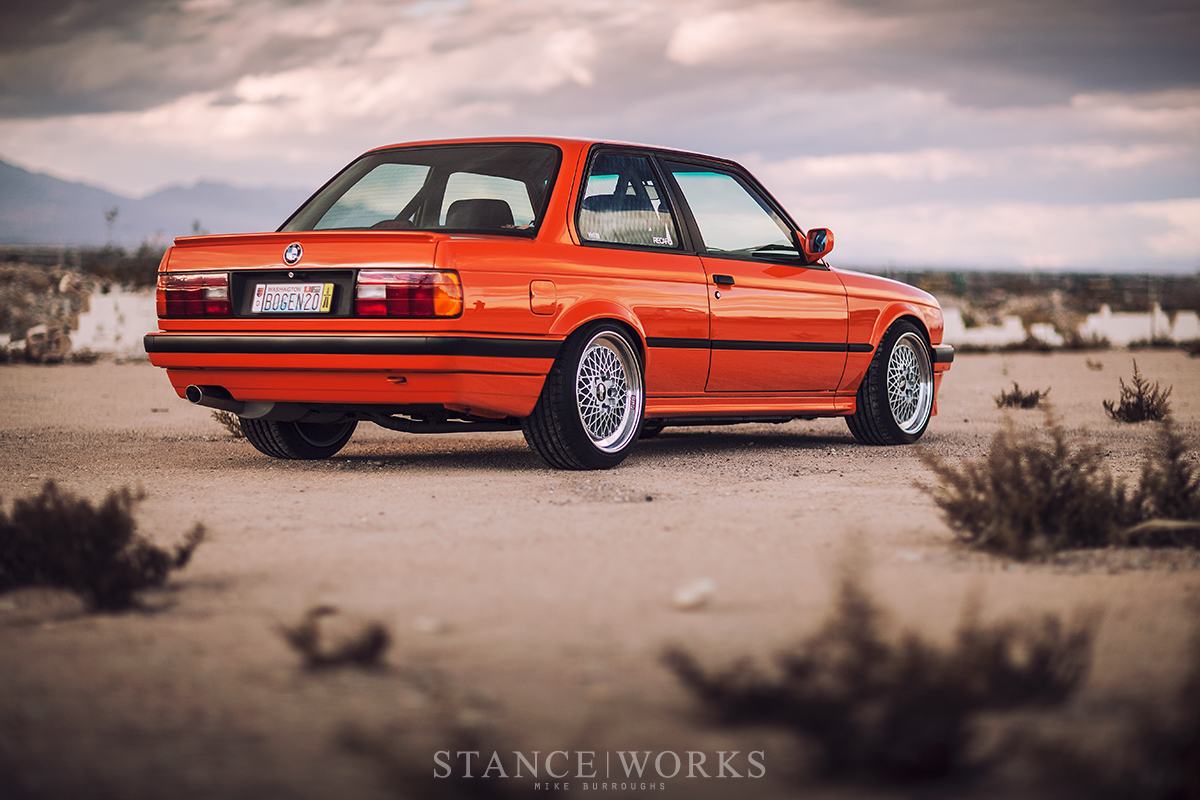 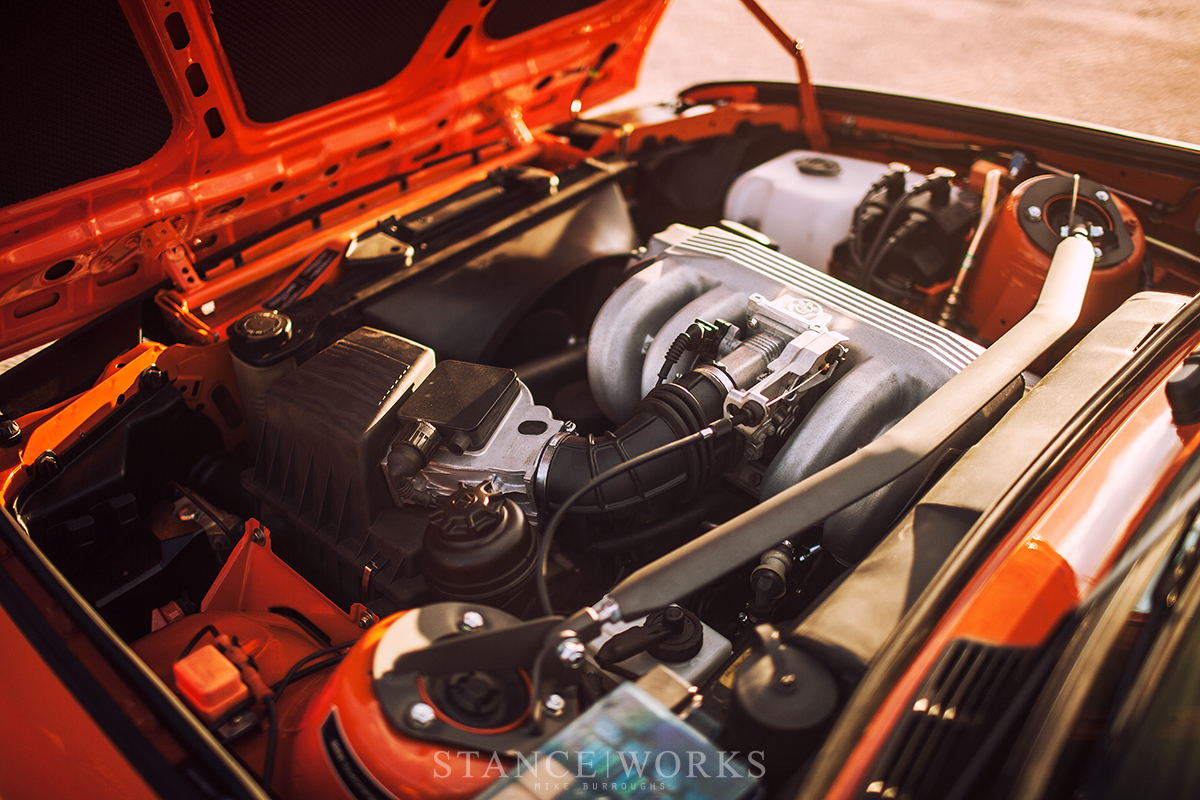 When creating the perfect E30, the factory parts can get you pretty far, but Roland knew there was still some room for improvement. He turned to the 318's M Performance brother to convert it to 5 lug, utilizing the E30 M3's brakes. The uprated brakes are fitted to M3 struts up which have been custom converted to H&R height-adjustable coilovers, matched by a set of aluminum H&R coilovers in the rear. To keep things level, a pair of H&R swaybars were bolted to the undercarraige. With the suspension situated, Roland turned to BBS for his wheel selection. A brand new set of magnesium BBS E50s were ordered. Measuring in at 17x8.5 and 17x9.5, and wrapped in Continental Contisportcontact 3 tires, the wheels continue the nod to BMW's motorsport history and complete the exterior look perfectly. 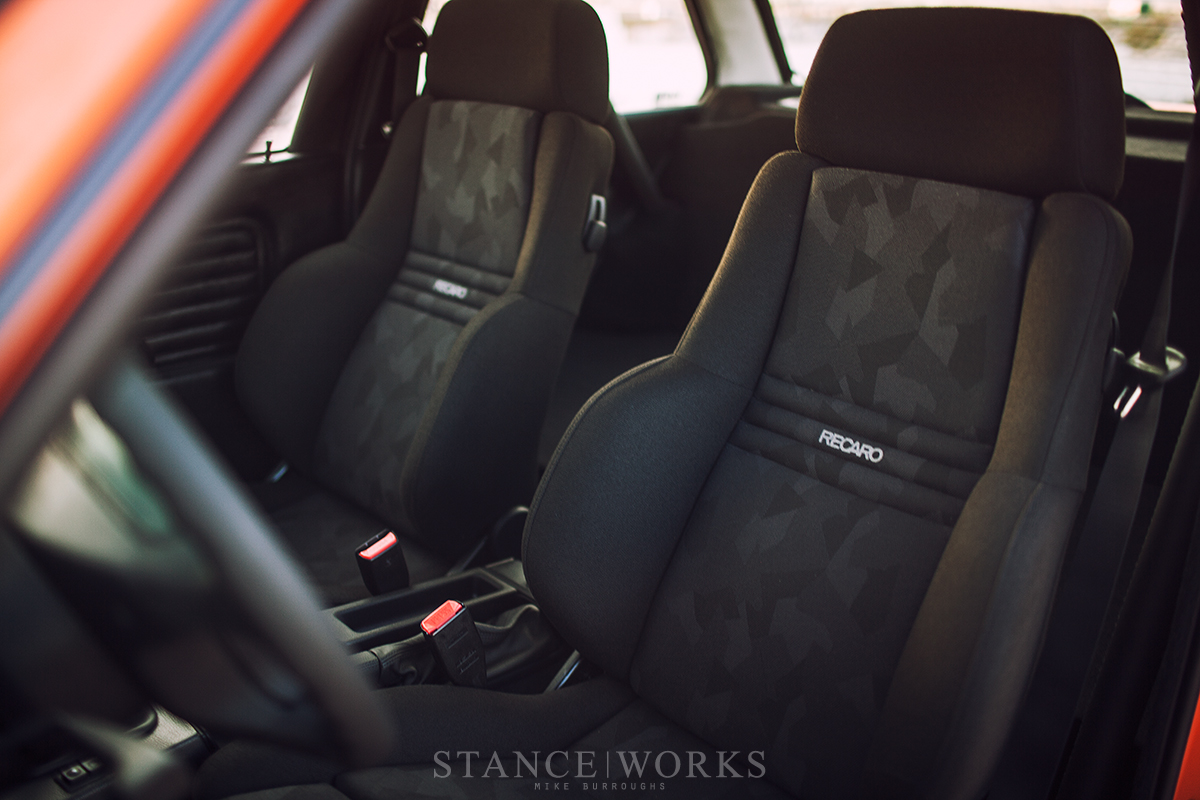 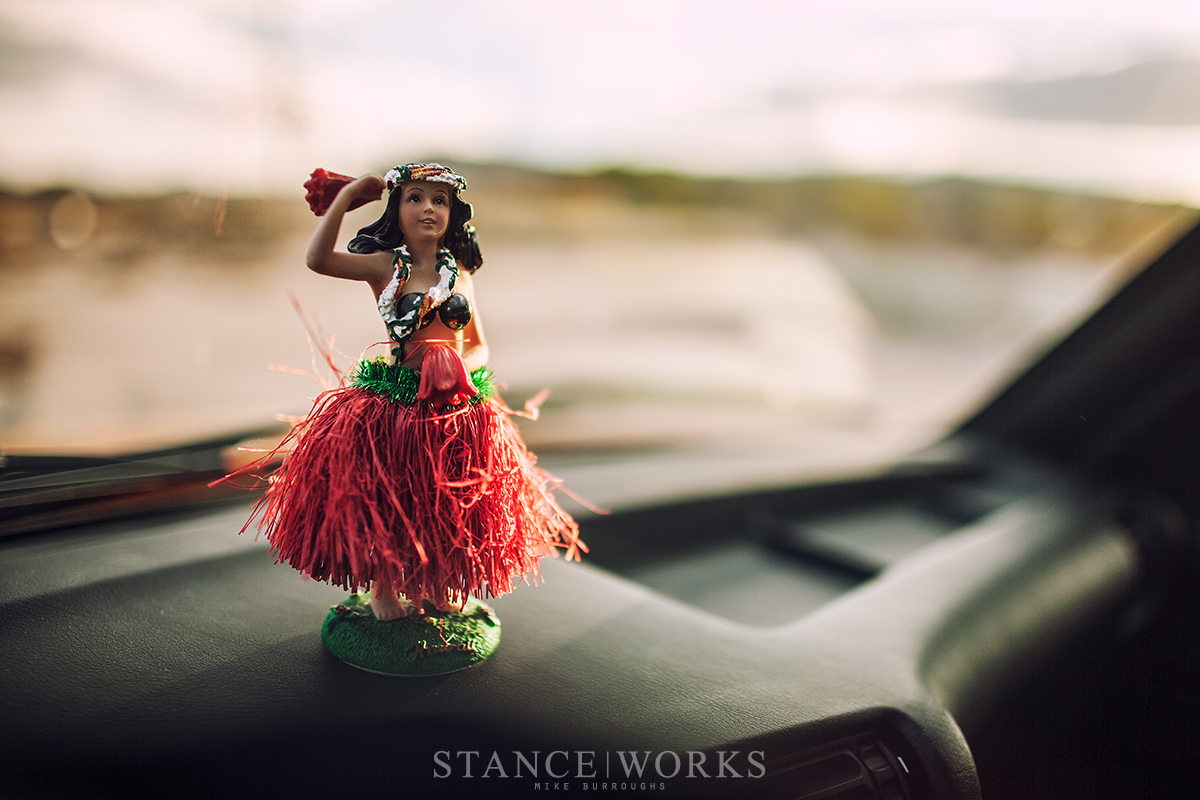 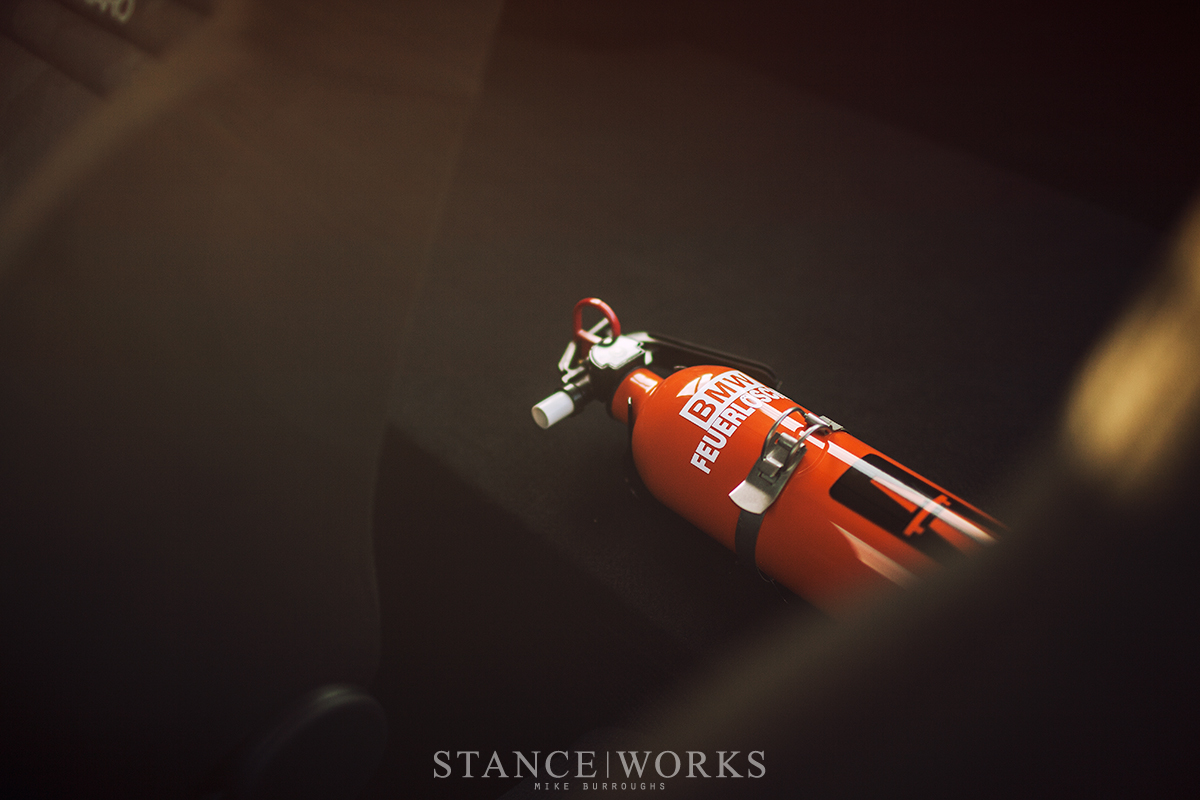 Roland isn't one to cut any corners, so the interior received just as much attention as the external apperance. Often faded and brittle from years out in the sun, E30 interiors look tired and forgotten, but the interior in the 318is looked like it had just rolled off the showroom floor. Recaro Orthoped seats offered the perfect period correct accent to the interior while also offering power reclining, and a Power Climate Package provides heating and cooling as necessary. The interior received the same part replacement regimen that pervades the project, and Weathertech floormats sit atop the new carpet to offer protection for the days of inevitable enjoyment out on the road. Straying a bit from the factory specifications, a custom rear seat delete clears out the rear cabin space, and a roll bar has been wrapped and hand stitched in nappa grain by Jeremy Pilgrim. 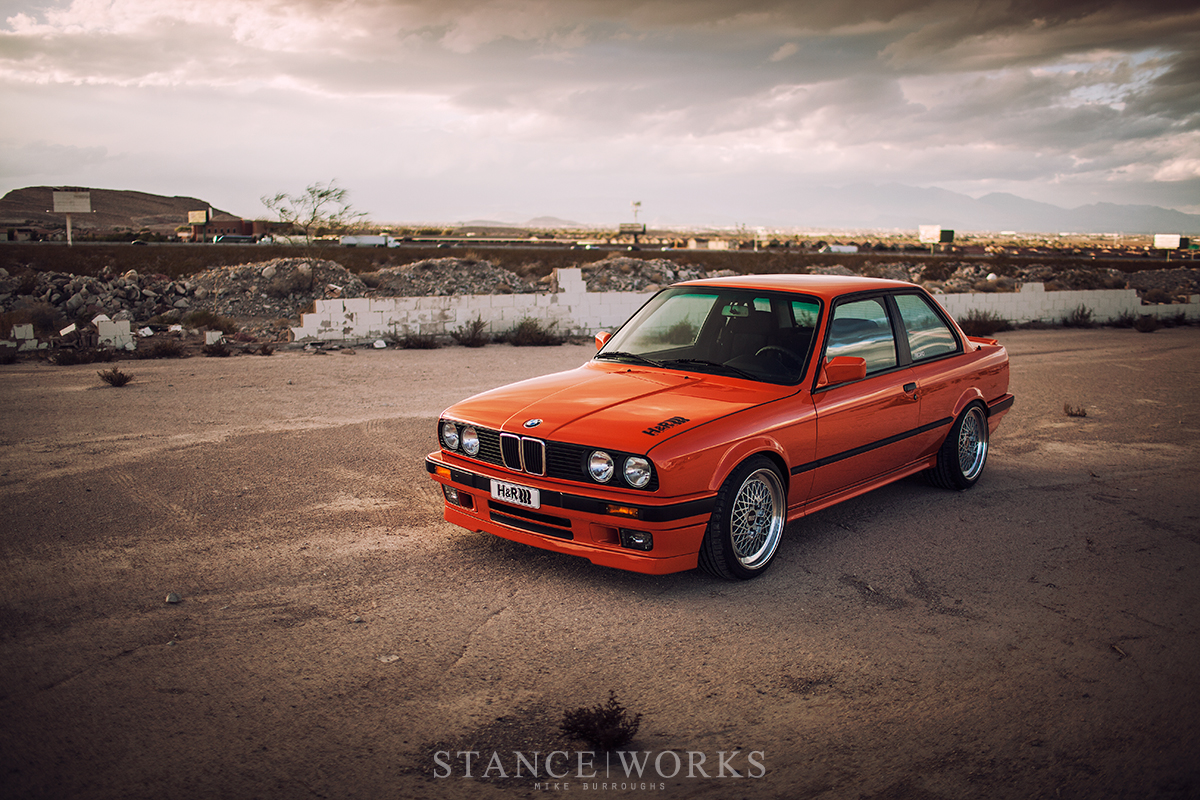 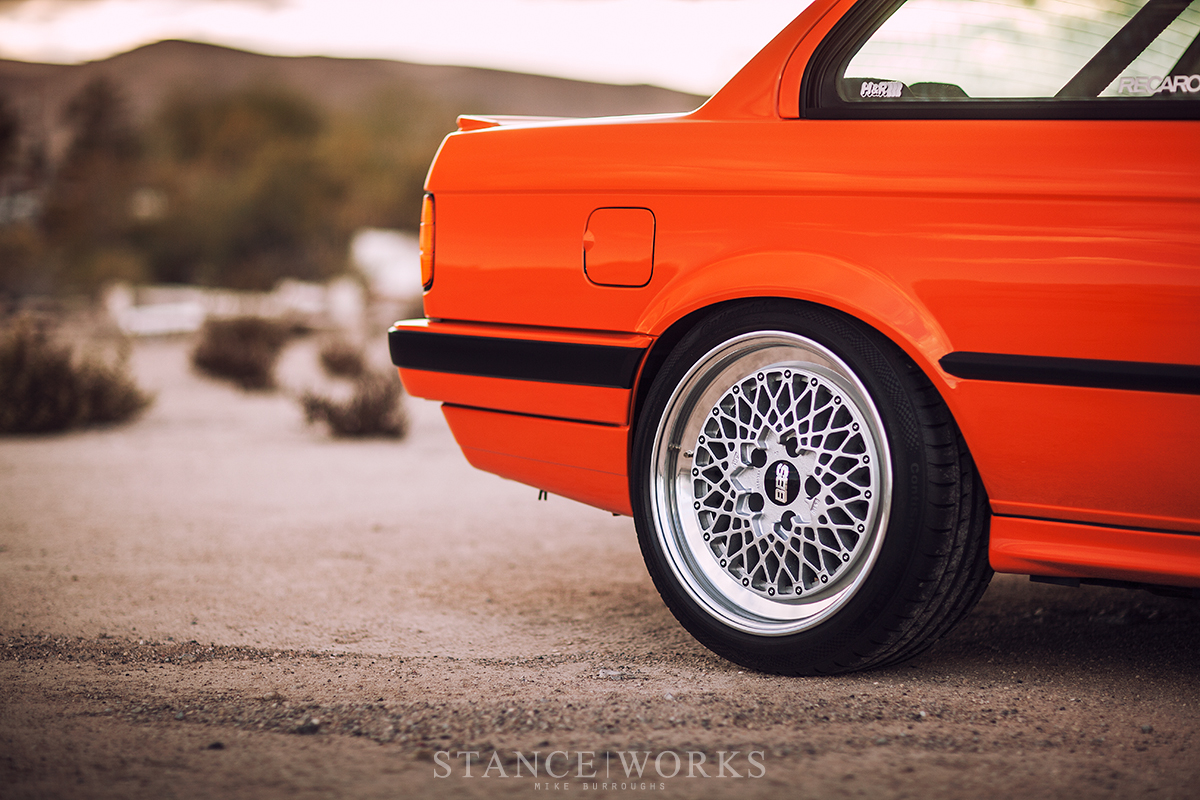 As a car that hasn't quite reached "classic" status and ranks on the lower end of the BMW hiearchy, the E30 is still an icon in the lineup, and we love to see it treated to a restoration as thorough as this. Roland has breathed new life into an old 3-series and the results speak for themselves. The H&R U94/2 E30 has really set the bar, and it will be on display all week in their booth at the SEMA show. 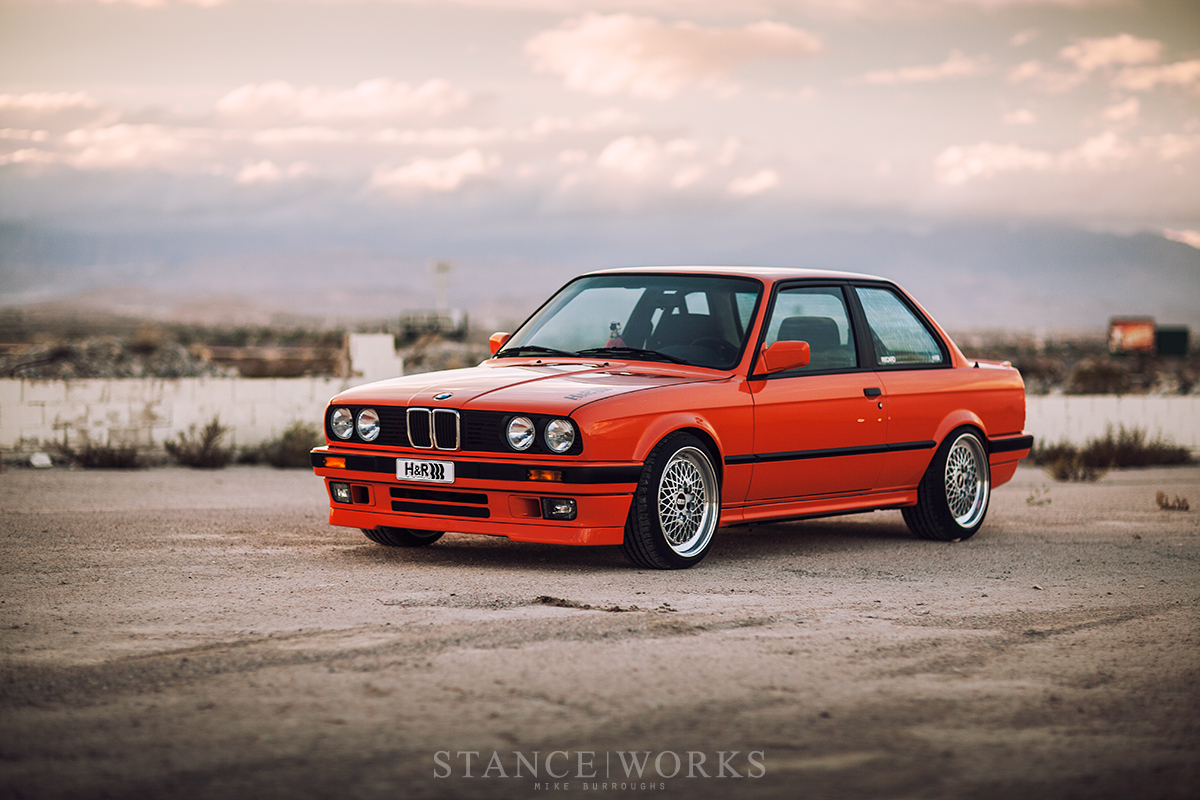