I could hear it from a mile off; a raspy but throaty howl bounced between the buildings towards me as I waited for Antoine and his 135i to arrive. The sun was beginning to dip behind the treetops that surrounded the back lot I had chosen to shoot in, and most of the surrounding buildings and foliage were glowing a rather-desirable bright, burning orange. Antoine's coupe grew louder, and moments later, he pulled into the lot, ready for the shoot. At face value, Ant's 135i suggests a more subtle nature, but its shrieks and screams give way to a more unprincipled and unbridled demeanor. 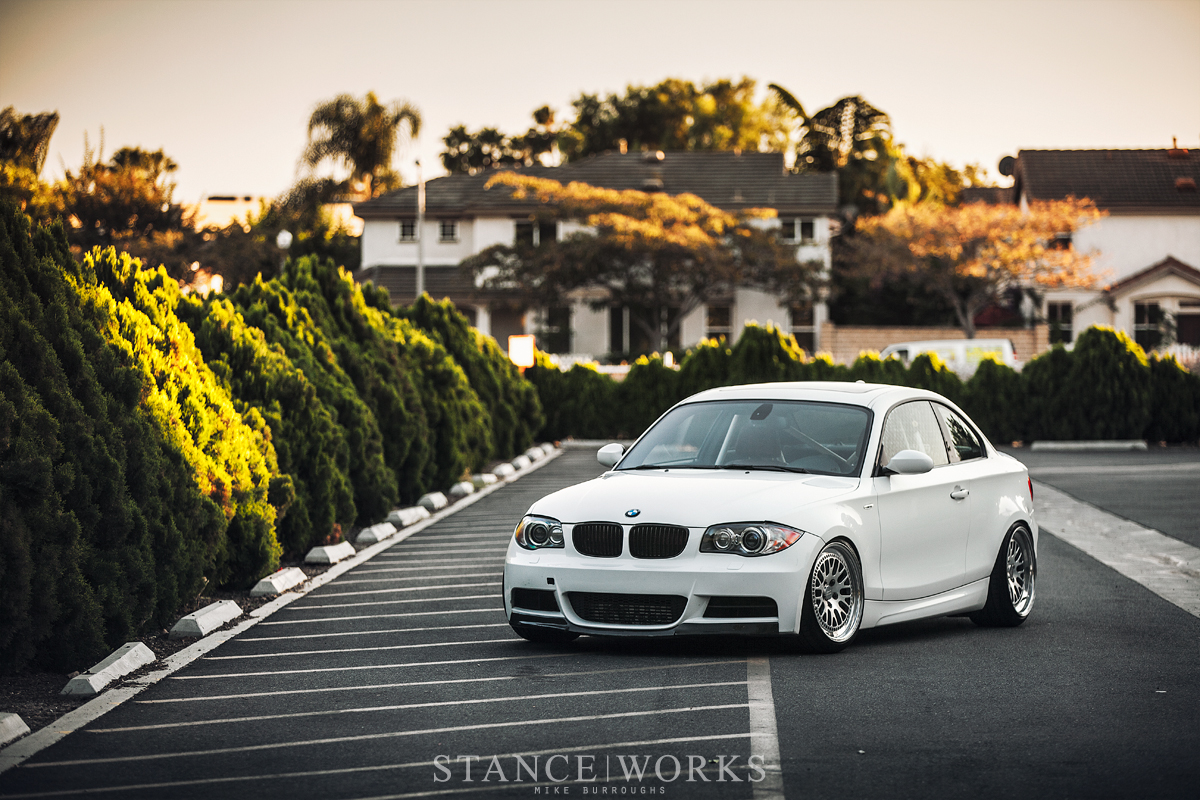 Antoine Spignardo is new to Californian soil, having grown up more than 3,000 miles away in central Florida. As a talented photographer, he moved from East to West, pursuant of his ambitions in the fashion industry. His art and style seep from his photographs and into his persona, with tattoos spilling from beneath the holes that fill his clothes. He's host to a laid-back attitude that's far more care-free than even the truest of Californian natives. Needless to say, he's right at home in SoCal, as is his car. 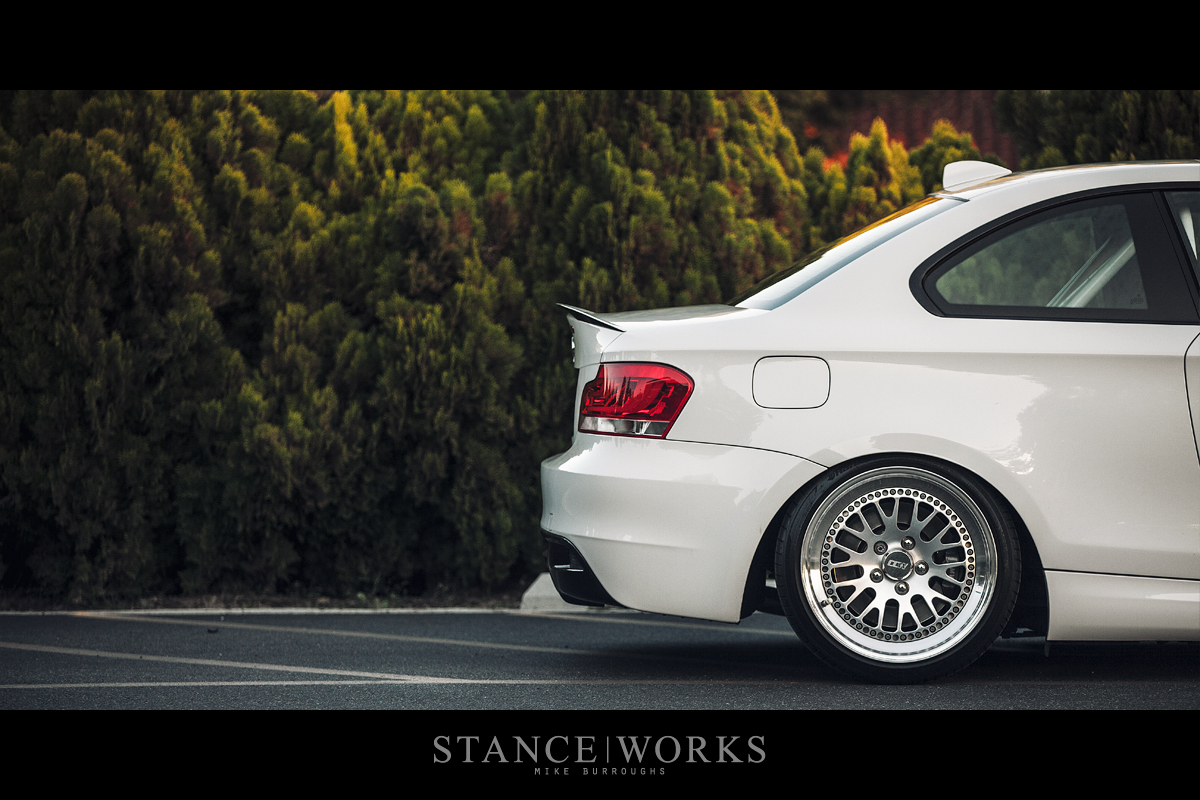 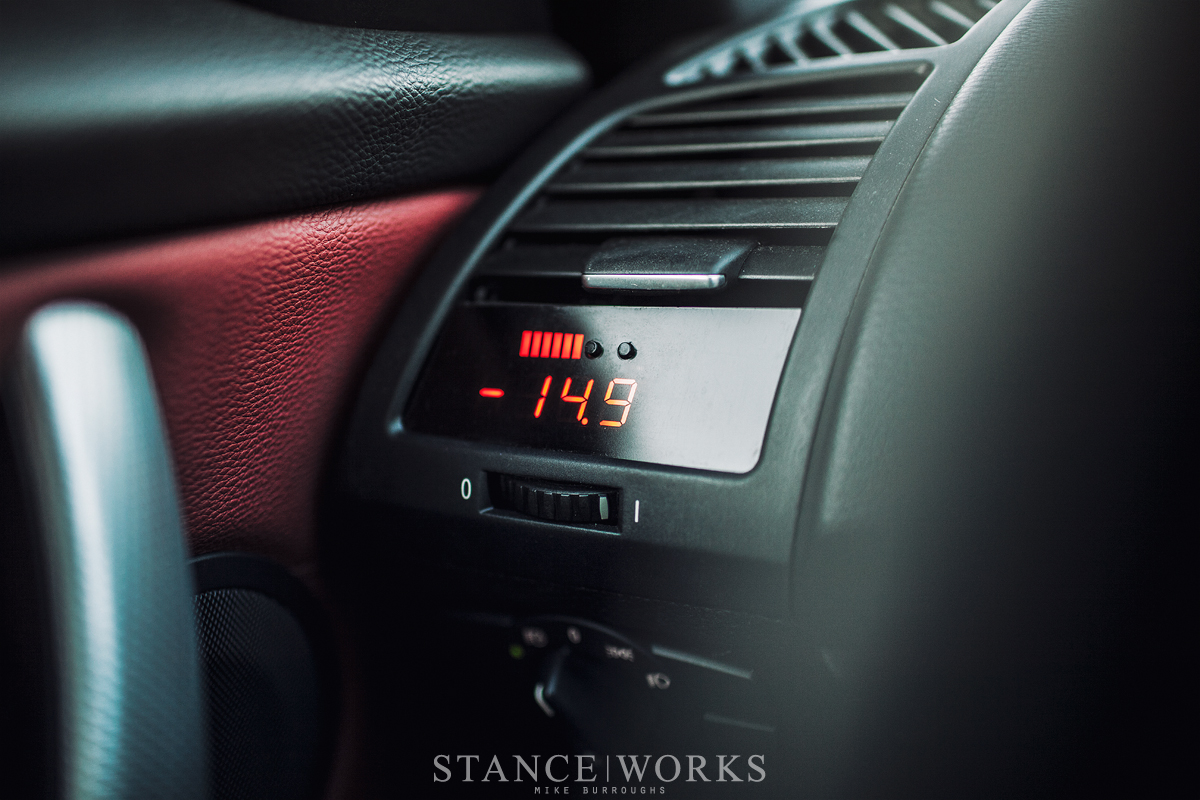 It would be disingenuous to call Antoine's car a "sleeper." There's no denying its presence, from its low-slung gait and its polished wheels, to its uninhibited bark and the alpine-white tubes that consume the back seat. What's worth noting, however, is that just like Antoine himself, his car's aesthetic is far from its most captivating characteristic. 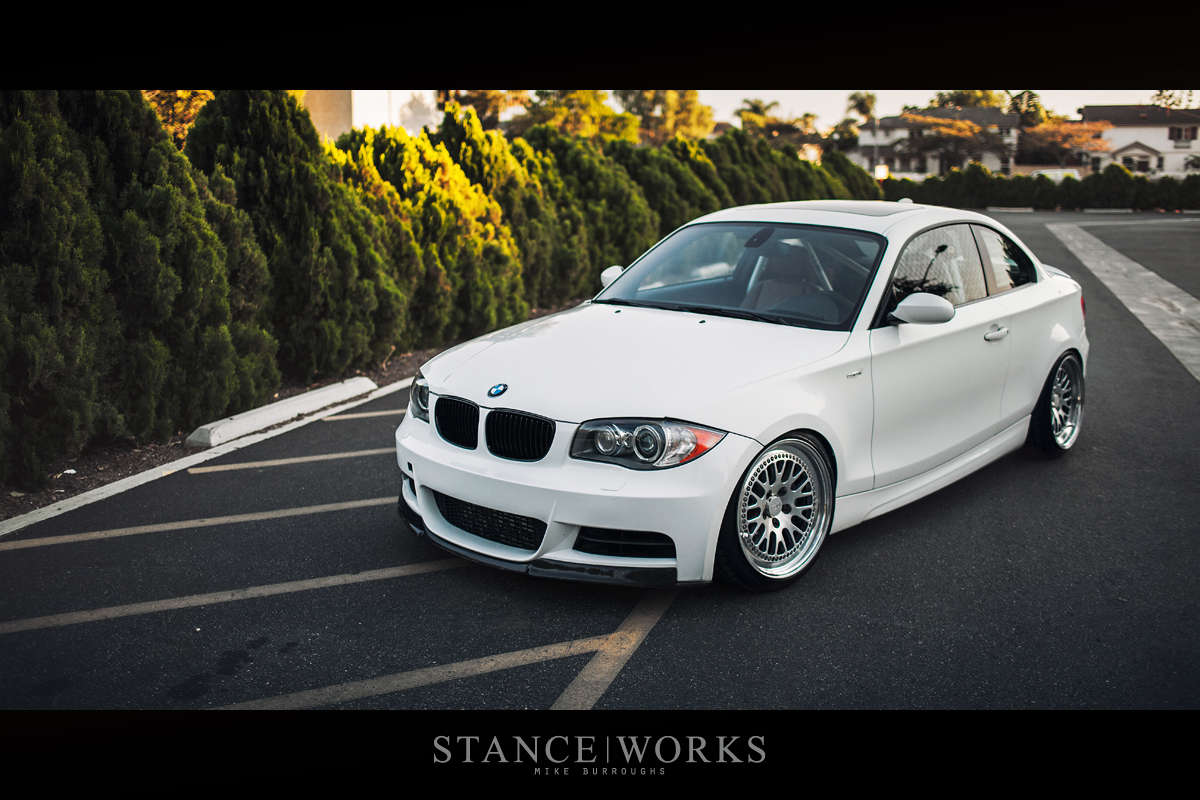 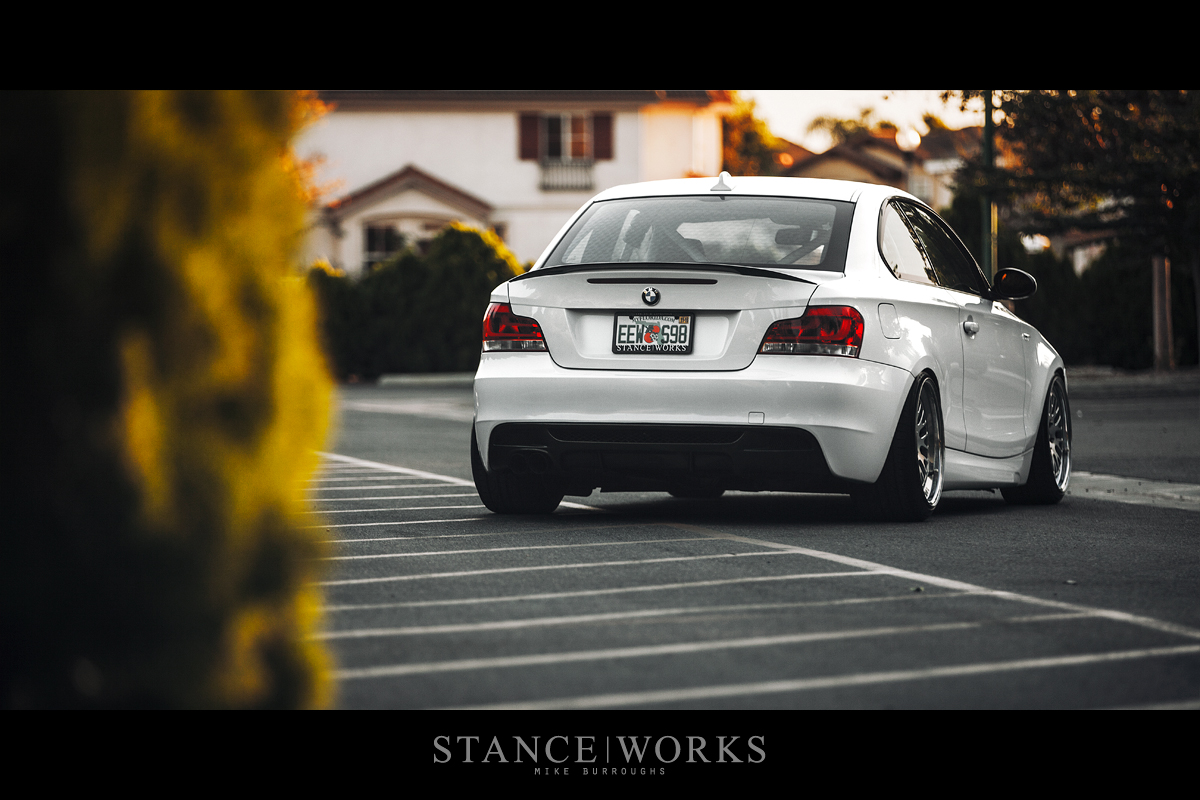 Antoined purchased the car new in 2009, originally with the intent of leaving the dealership with an E92 M3. His first experience with the all-new 1-series was less than enthralling - its short nose and unique proportions left it looking a bit unrelated to the rest of BMW's lineup, and Ant has no hesitations in admitting it was not love at first sight. Instead, it was a BMW salesman and his push to get Antoine behind the wheel of the car that did him in. The car's nimble nature and prominent power sold him immediately. The white-over-coral red combo sealed the deal, and with that, the project was born. 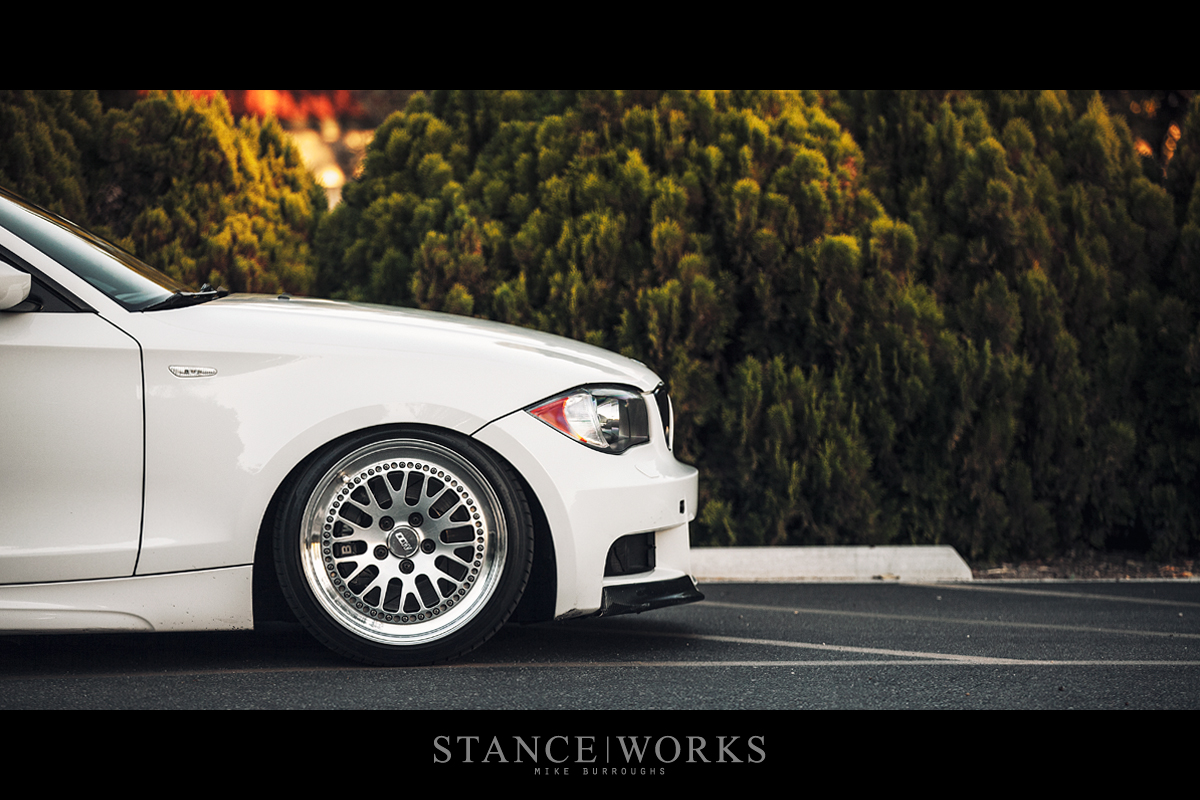 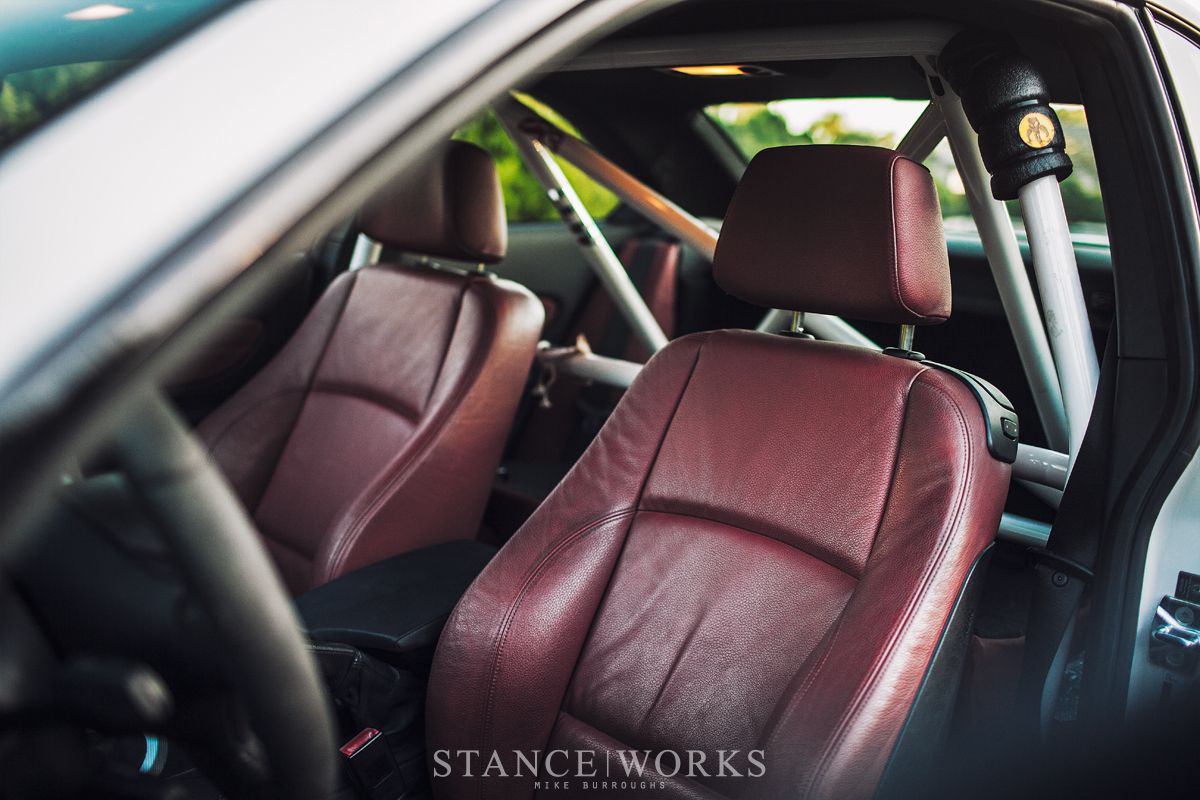 It was a mere 3 months before he began to modify the car. Upon the 135i's release, thanks to its relation to the 335i, tuners and modders were quick to pull power from the 135i's heart, and seeing so across the forums left Ant feeling as though there was more to be had from his new purchase. Working part time at Lutz Performance only increased his exposure to high-output cars. 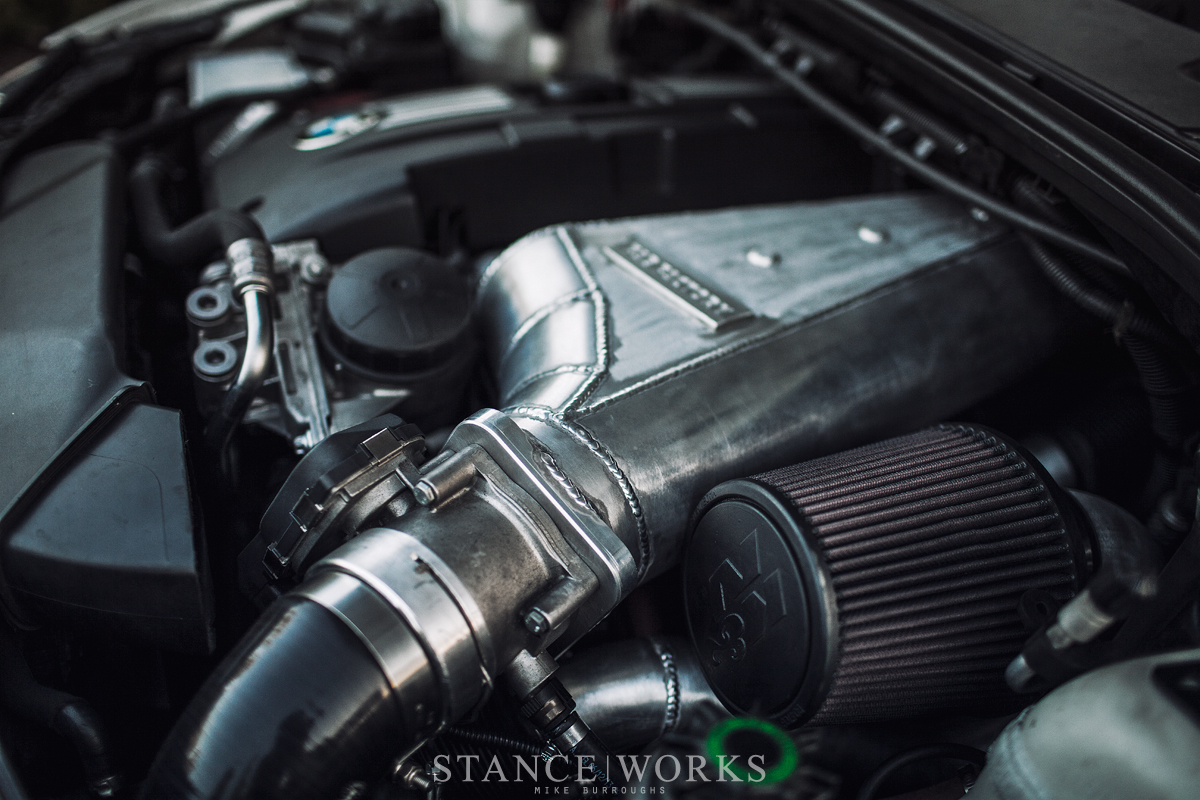 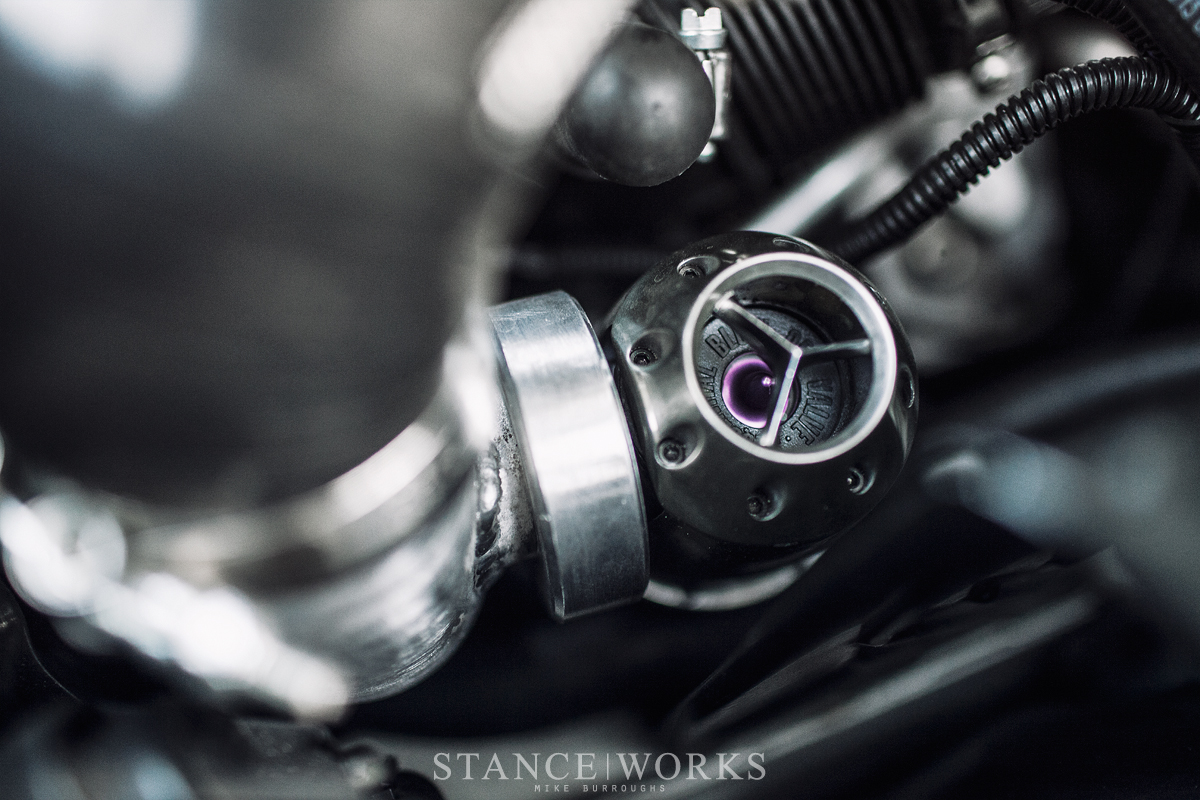 Now, several years later, it should come as no surprise that today, his 135i sports a JB4 tune running a custom map, which is paired with a custom intake manifold, charge pipe, and intake system, all produced by FabFactory. Active Autowerke 3" downpipes route to a catless custom 3.5" straight-pipe exhaust, and other bits such as an upgraded fuel pump, injectors, an oil cooler, and more, all help to balance out the newfound power. How much? A staunch 460 horsepower at the rear wheels, thanks to 18 PSI from the factory turbochargers. The package yields a brilliant level of power in a rather unsuspecting car, and when paired with the renowned handling of the E82 chassis, Antoine is left with a car that is nothing short of heaps of fun. 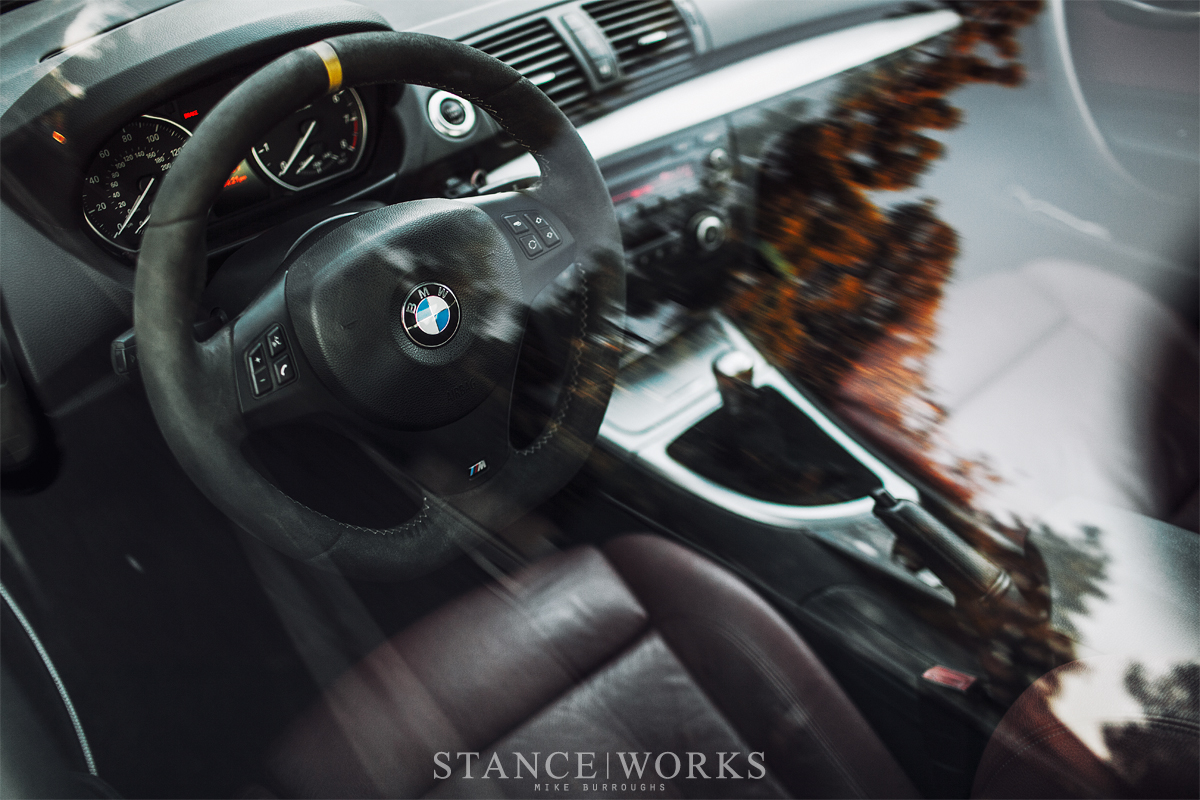 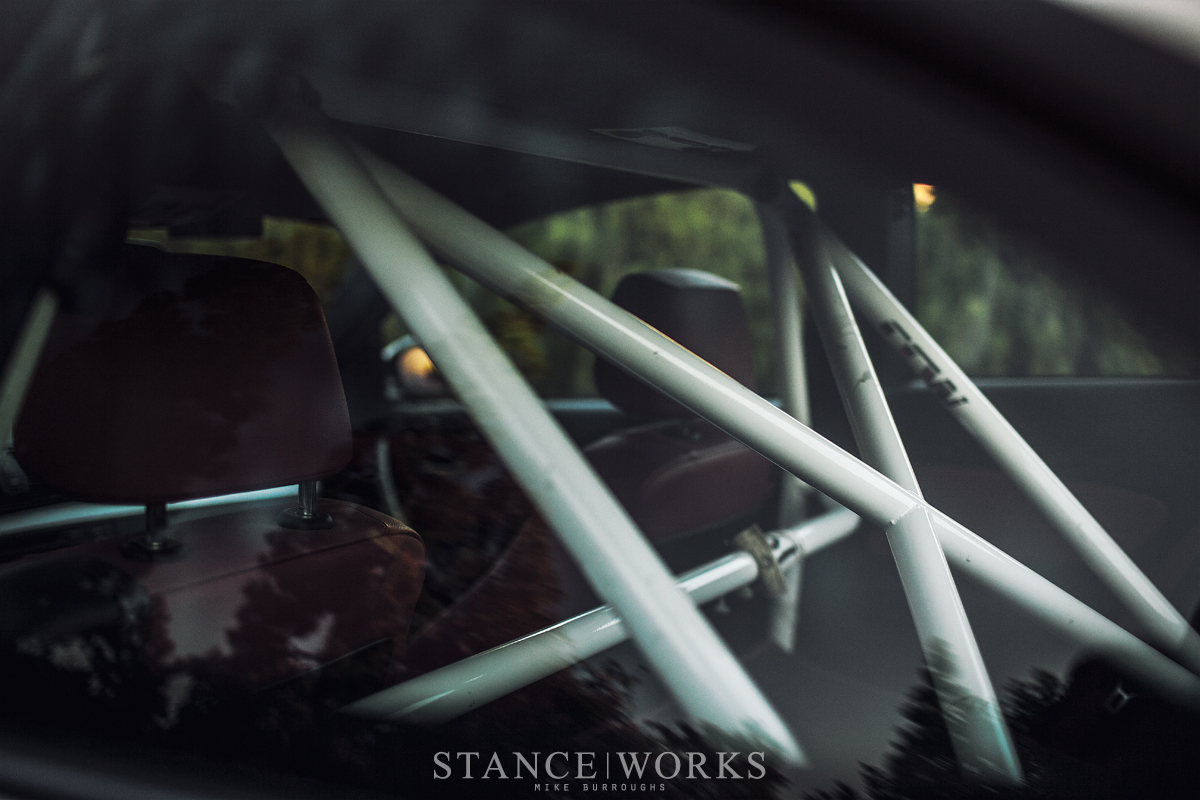 Wanting the car's form and function to work in unison, Antoine took extra care to ensure his choice of aesthetics - low and wide - didn't interfere with his desire to drive. Tucked under the car as the exterior's focal point is a set of CCW Classics, measuring out to 18x9.5 and 18x10.5, wrapped in Hankook Ventus V12s. As his 135 scurries and scampers across the Californian highways, everything clears with room to spare, meaning there are no missed opportunities to throw the car into turns, curves, and clover-leaf onramps. Broadway Static 510 coilovers and Swift Springs provide the ride control, offering a balance of style and usability. 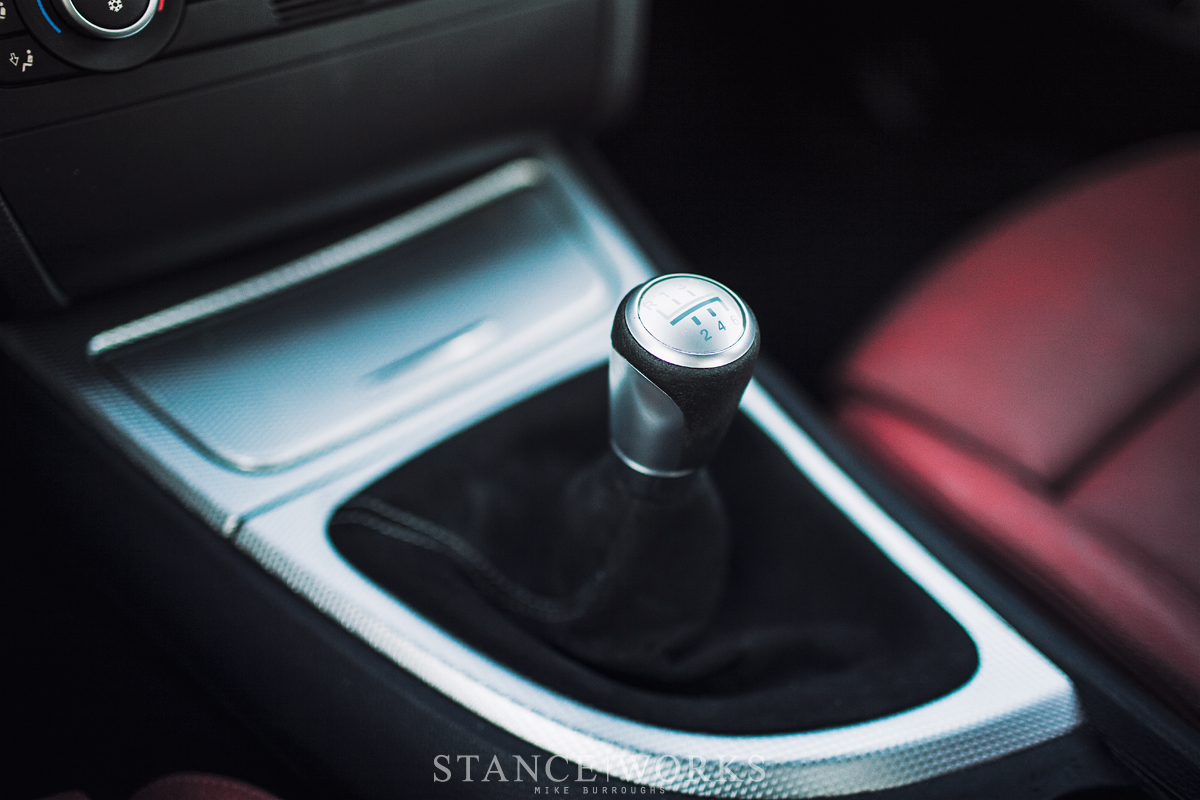 Overall, Antoine keeps the car's style "simple" at most. OEM BMW Performance accessories make up most of the aesthetic changes, aside from the aftermarket wheels and the iCarbon front lip. Perhaps his thoughts on the 1-series styling have improved since he first encountered it, as it seems he's felt it needs very little changing. Perhaps not... but in any case, his choices make for a car that blurs the line of subtlety, blending both power and poise. Antoine Spignardo's 2009 135i is a fresh reminder that there's something to be said about those that don't strive to break the mold, but instead strive to meet their ambitions, whether that means building their ideal E82, building a name in the fashion industry, both, or something different entirely. 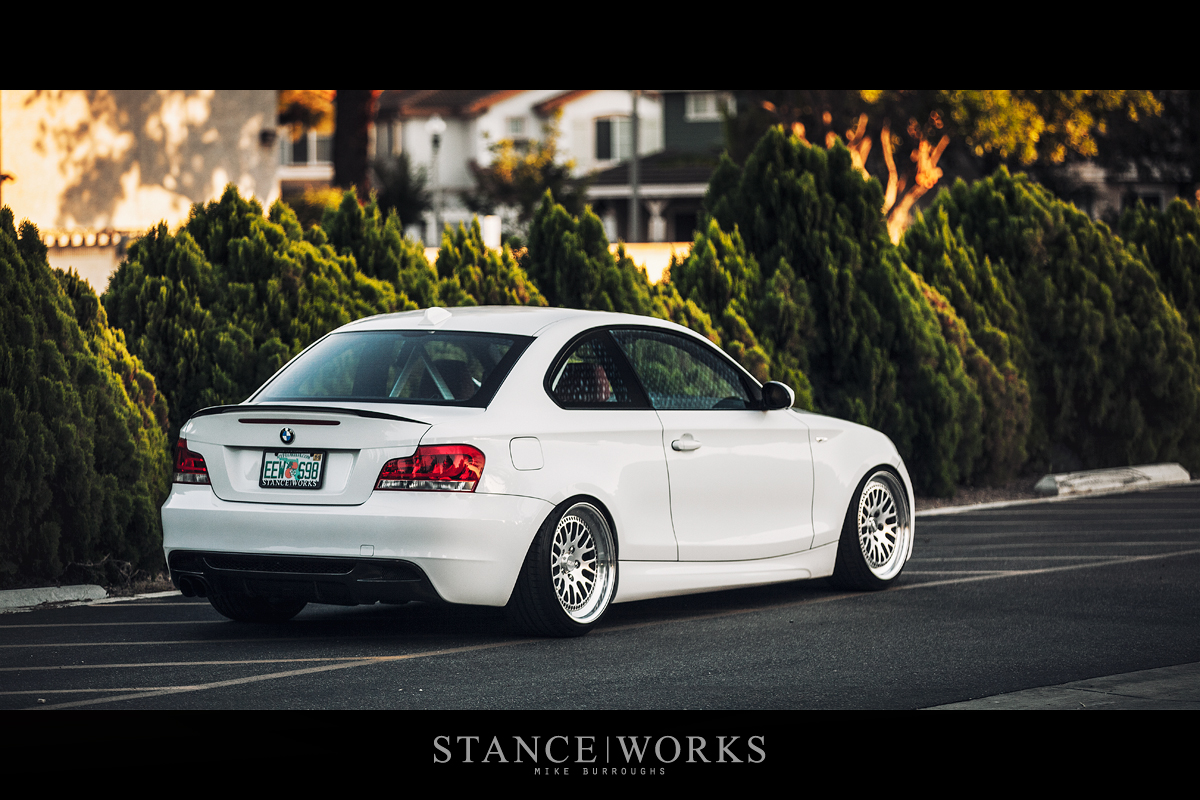