Practice makes perfect, and good things come to those who wait; two common phrases that hold frustratingly true. Jaze, the owner of Broadway Static and the not-so-subtle green Felony Form wide-body E36, is all too familiar with those words of wisdom. In regard to his car, it's not his first rodeo with an e36 BMW; he previously owned an rather nice 1JZ swapped 318is. It was a car that anyone should be proud to own, but Jaze wanted to go a little bit further this time around. The 1JZ swapped car was sold to a good friend of his, and the search for a suitable replacement began. 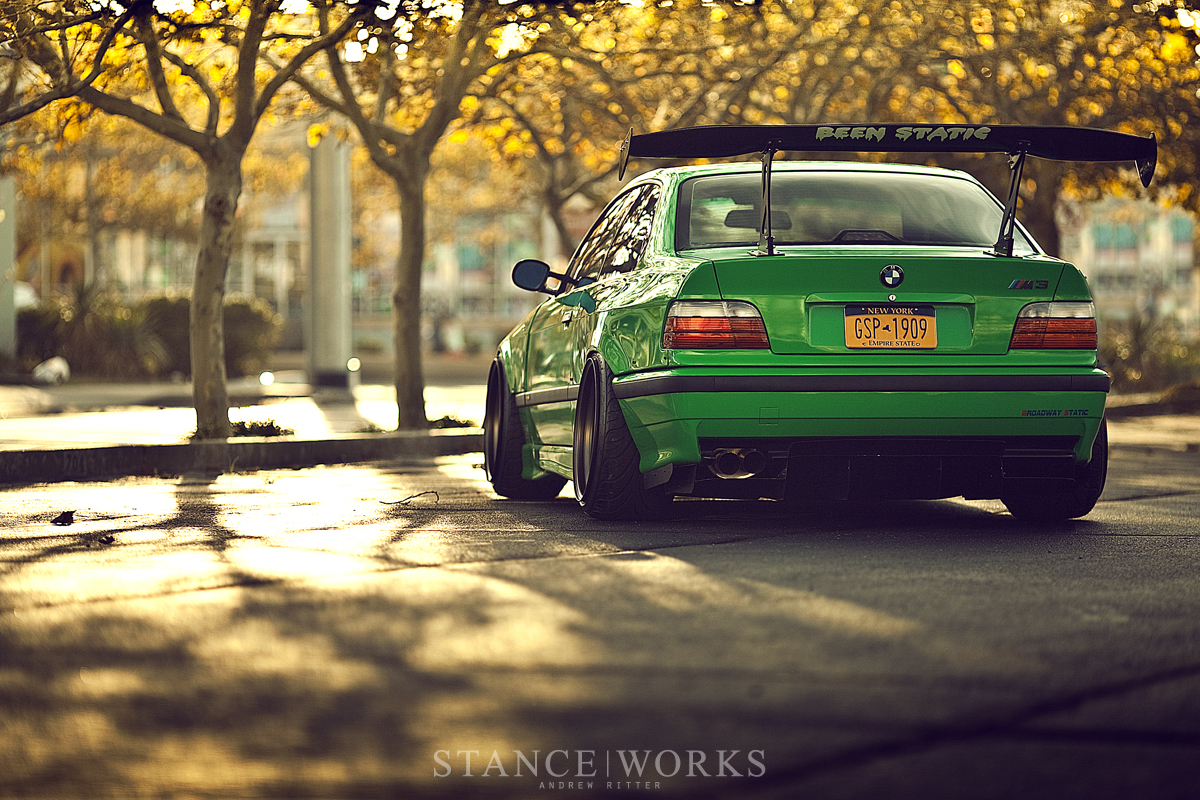 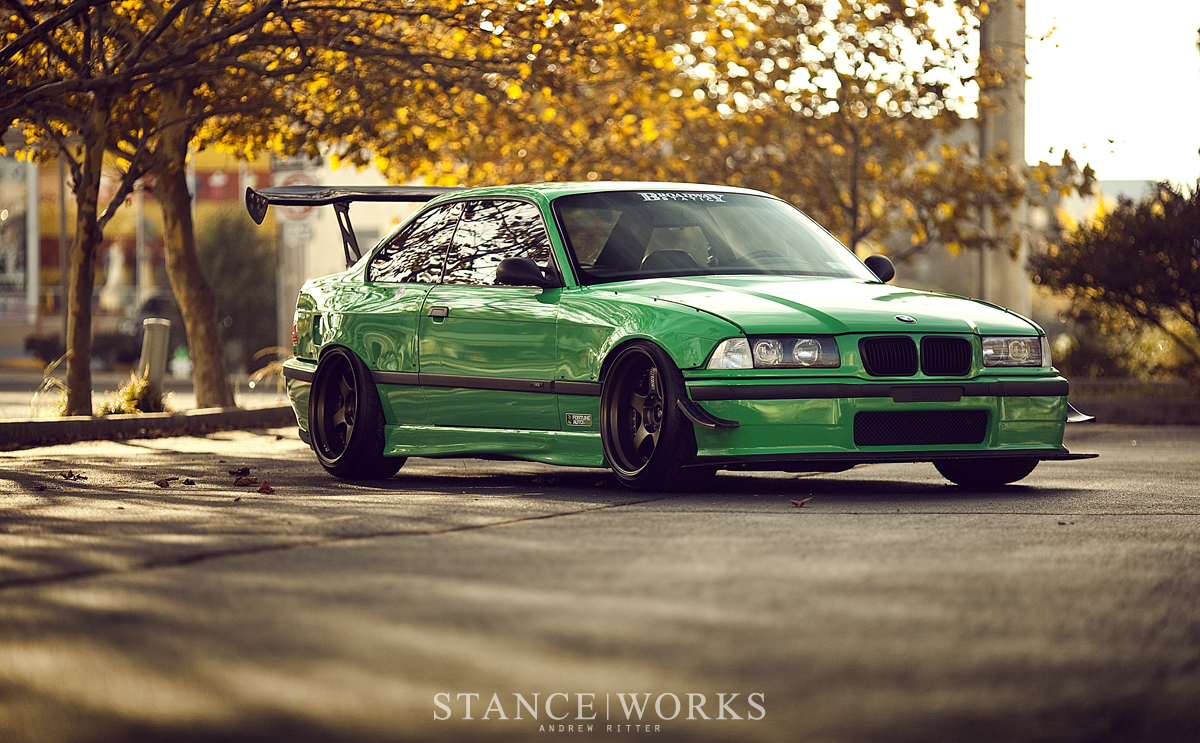 When selling an old project and moving on to something new, the temptation to change things up and go with an entirely new chassis is high. It’s an easy way to get a fresh experience, but can come with a steep learning curve. Jaze, however, is a man who knows what he likes; he wanted to jump right back into an e36, a car he is quite familiar with. Naturally, the e30 and e46 chassis BMWs were considered, the predecessor and successor to the e36, but nothing hit the sweet spot of balancing a raw driver experience with refinement, which Jaze finds in the e36. His previous e36 was very cleanly styled, and despite the Toyota driveline, had very european aesthetics. He had been spending a lot of time around Time attack cars, working closely with Fortune Auto, and wanted to go a bit more radical this time around. The hunt was on for a suitable car; no easy task in the current state of the e36 market. 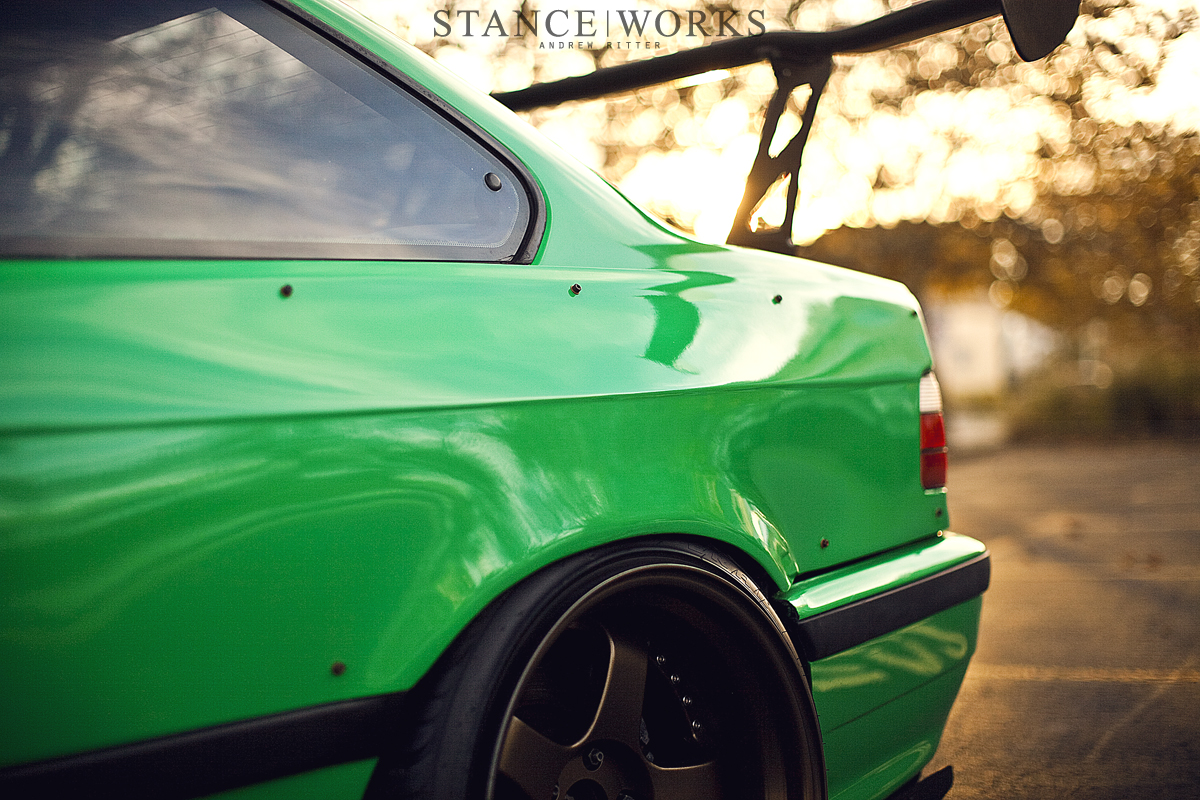 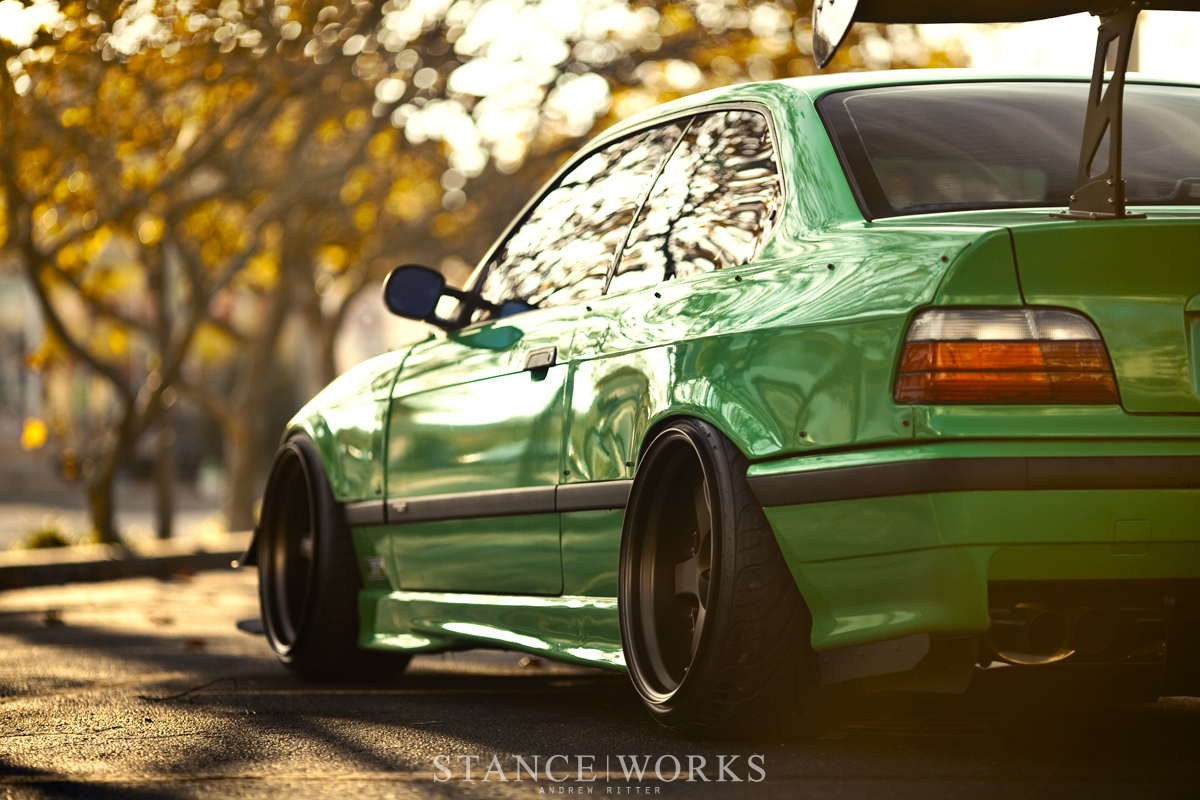 The search started in early 2014, and the pickings were slim. Jaze planned to go with a Felony Form wide body before the search had even begun, so the requirements for the replacement should have been somewhat easy to fill. He was after a reasonably priced, somewhat straight, rust free car, and it would be perfectly fine if the interior and motor had seen better days. After having no initial luck, Jaze came across a buried post from a gentleman with no pictures, claiming to have a 1995 M3 shell that was in great condition, and to please email for more information. An email was shot out with low expectations and quickly forgotten as no response was had for over two weeks. Much to his surprise, when a reply came, it was with pictures of a very clean e36, as well as a PDF with an extensive record of maintenance history, and tasteful mods: a dream come true for an enthusiast. The car was missing a motor, and the pictures were from 2012, although the seller claimed it had been parked in storage since. It was otherwise complete, and seemed perfect for what Jaze was after. He bought it sight unseen. 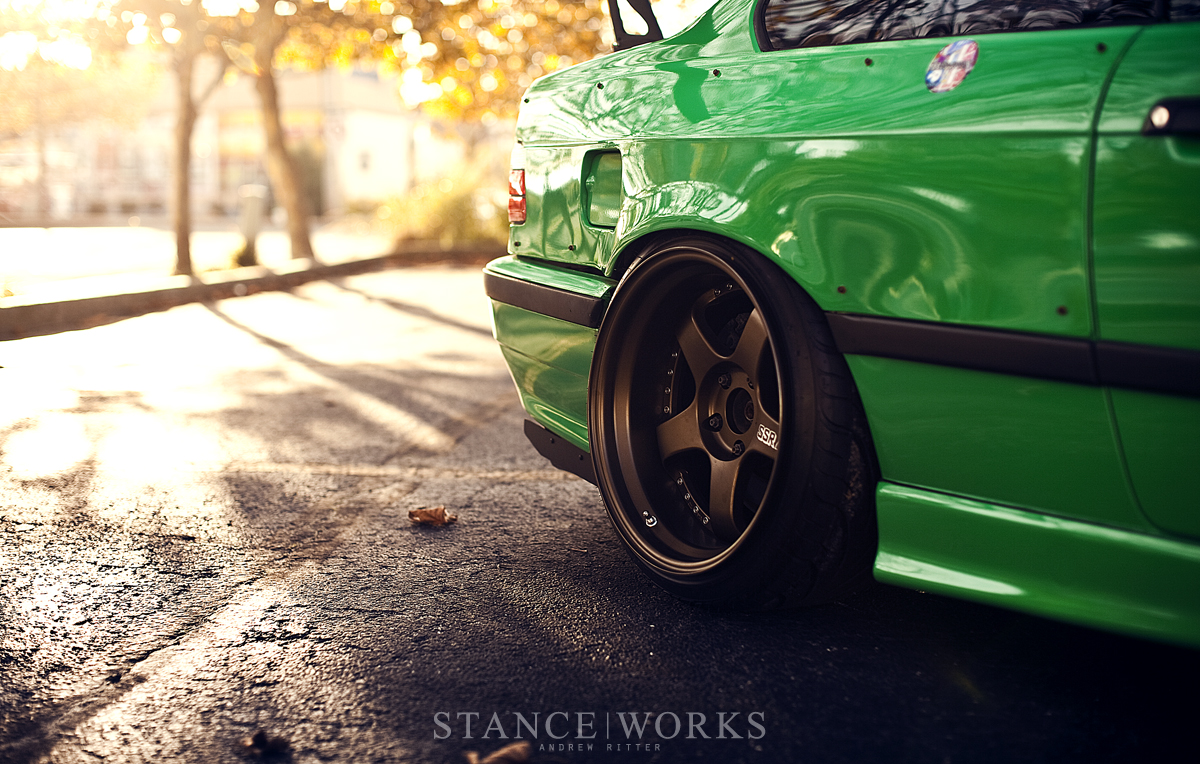 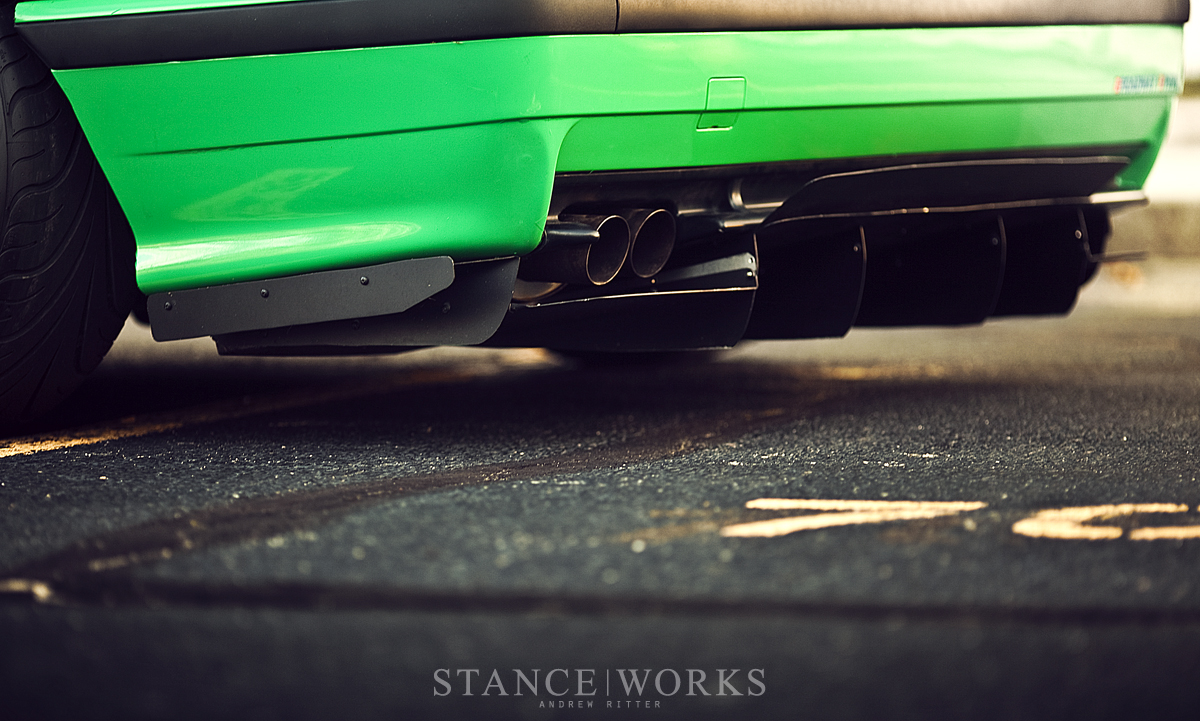 When the car arrived, he couldn’t believe the condition it was in. It was by far the cleanest car he had ever owned, and everyday a new friend would try to “save” it from him. The Felony Form fenders had already been purchased however, and Jaze’s eyes were on the prize. It hurt to do the first quarter panel, Jaze commented, claiming he couldn’t even look as he and Ollie cut into it, but once that first incision was made, a sense of calm was found, and the line of no return had been crossed. Everything started to move quickly from there, with an S50 being sourced to power the car, and the bodywork coming together quickly with Ollie’s experienced hands. The build went smoothly, with a special thanks to his girlfriend, who was there to get her hands dirty every step of the way. 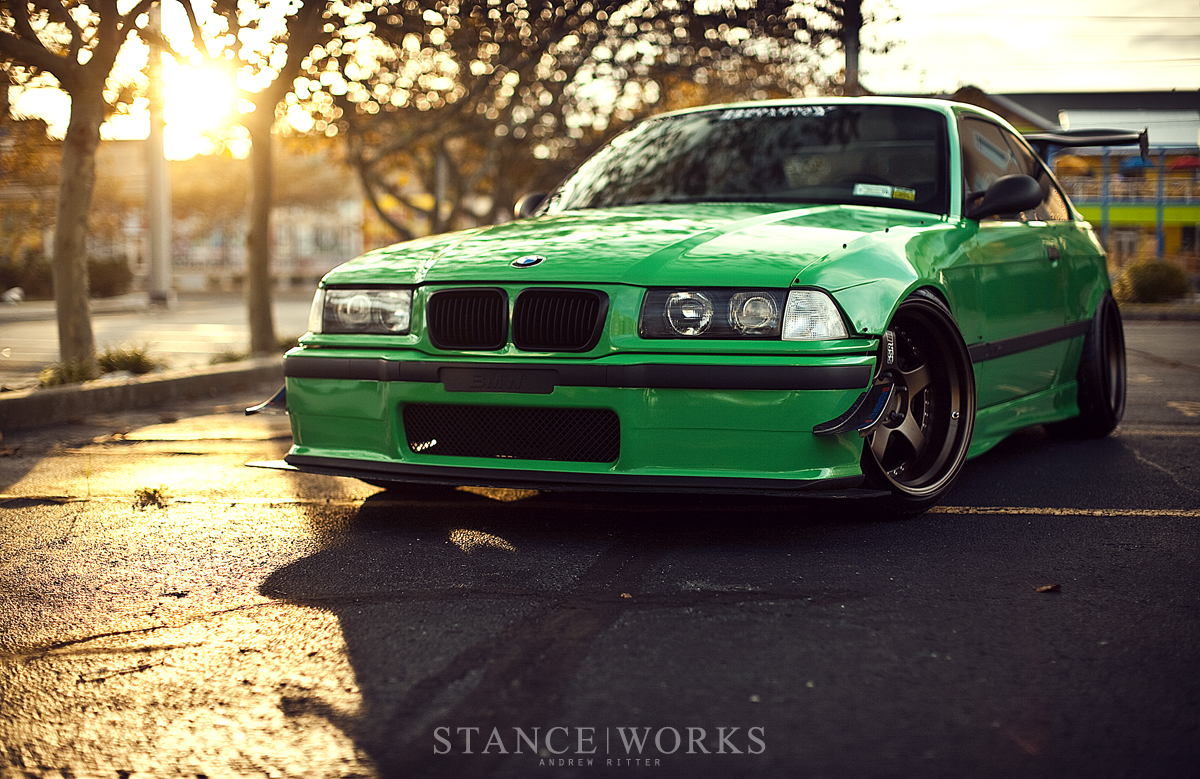 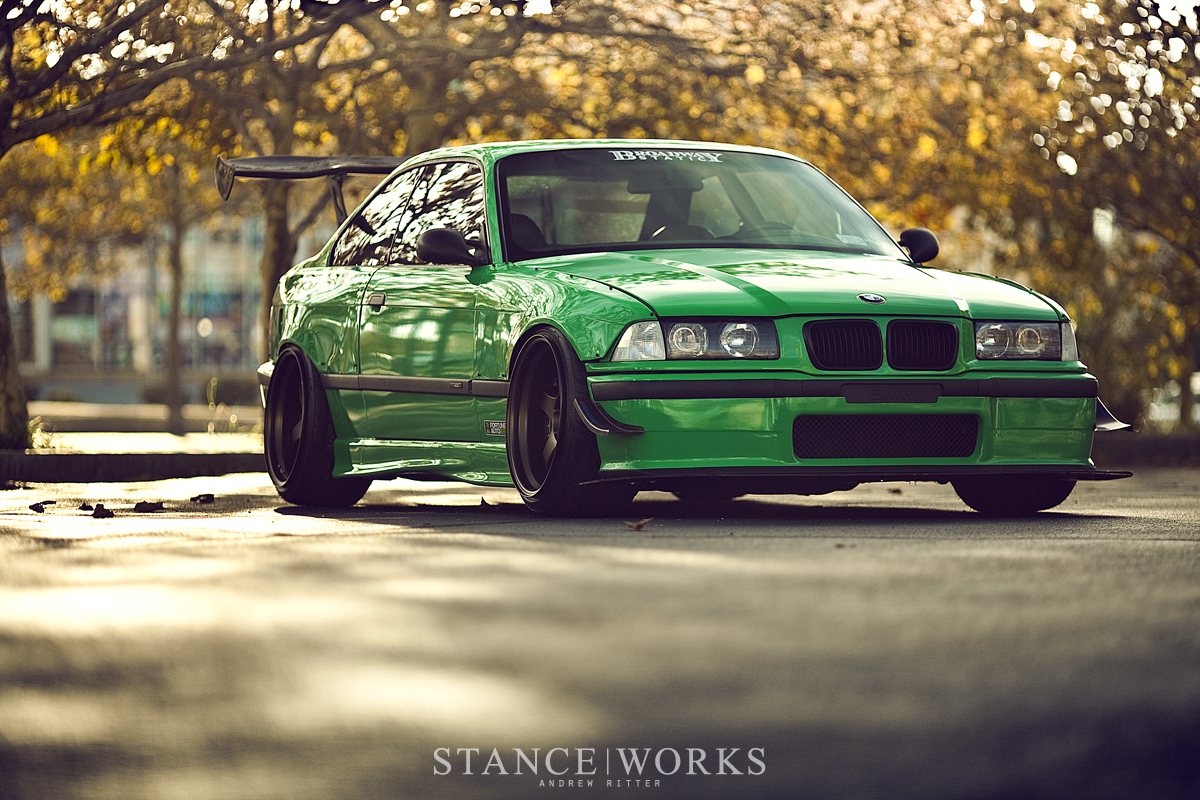 There is quite a bit going on with the exterior of the car in addition to the gorgeous Felony Form fenders. Time attack cars such as the Scorch S15 and Tilton Interior Evo were big sources of inspiration. Starting at the front, Jaze took the standard M3 bumper and shaved the foglight and factory brake ducts, as well as added canards. The big splitter hanging underneath the front is a custom piece he made and mounted. Initially, he had attempted to have one custom made elsewhere, but when it showed up it was closer in shape to a banana than a piece of aero. It was quickly decided if he wanted it done right it was likely best to tackle it himself. A heavily modified Mateo Motorsports diffuser and Origin Lab wing finish off the aero on the rear of the car. While his previous e36 displayed his appreciation for JDM culture under the hood, this car aesthetically represents it, and the cherry on top is a set of custom rebuilt SSR Professors, refinished fully in a classic bronze. 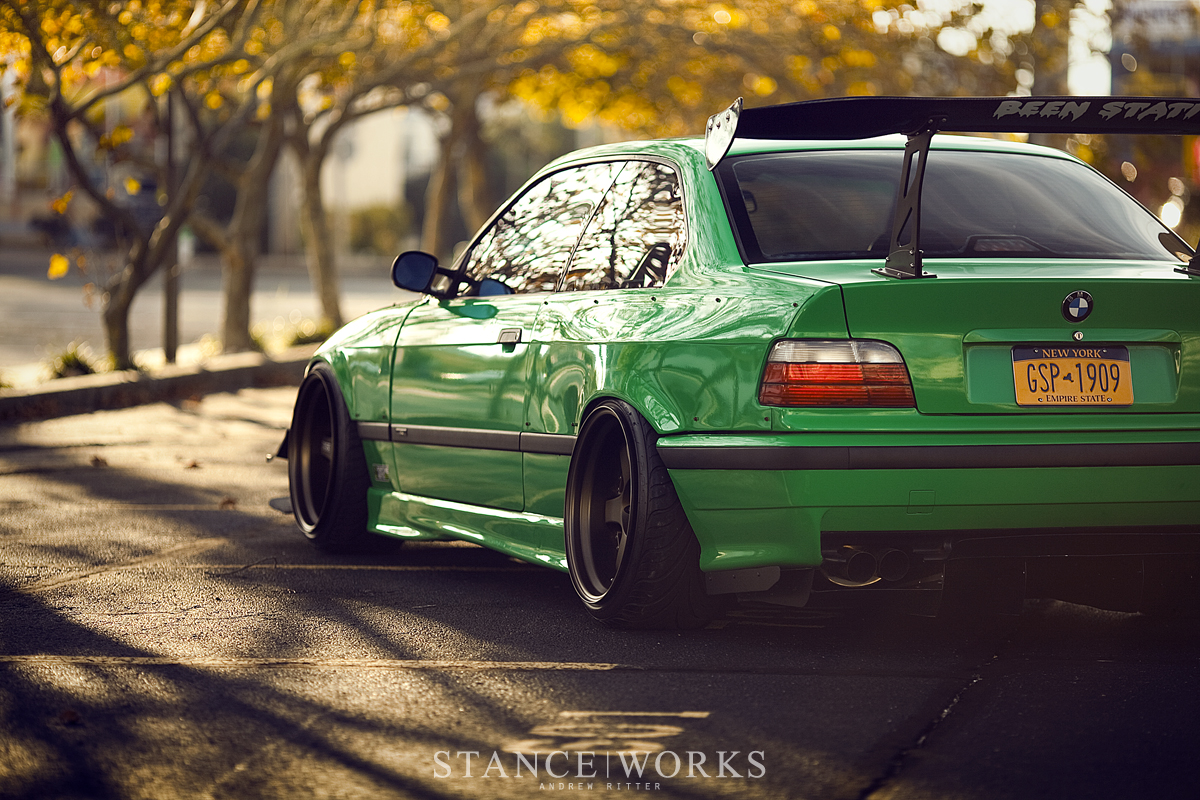 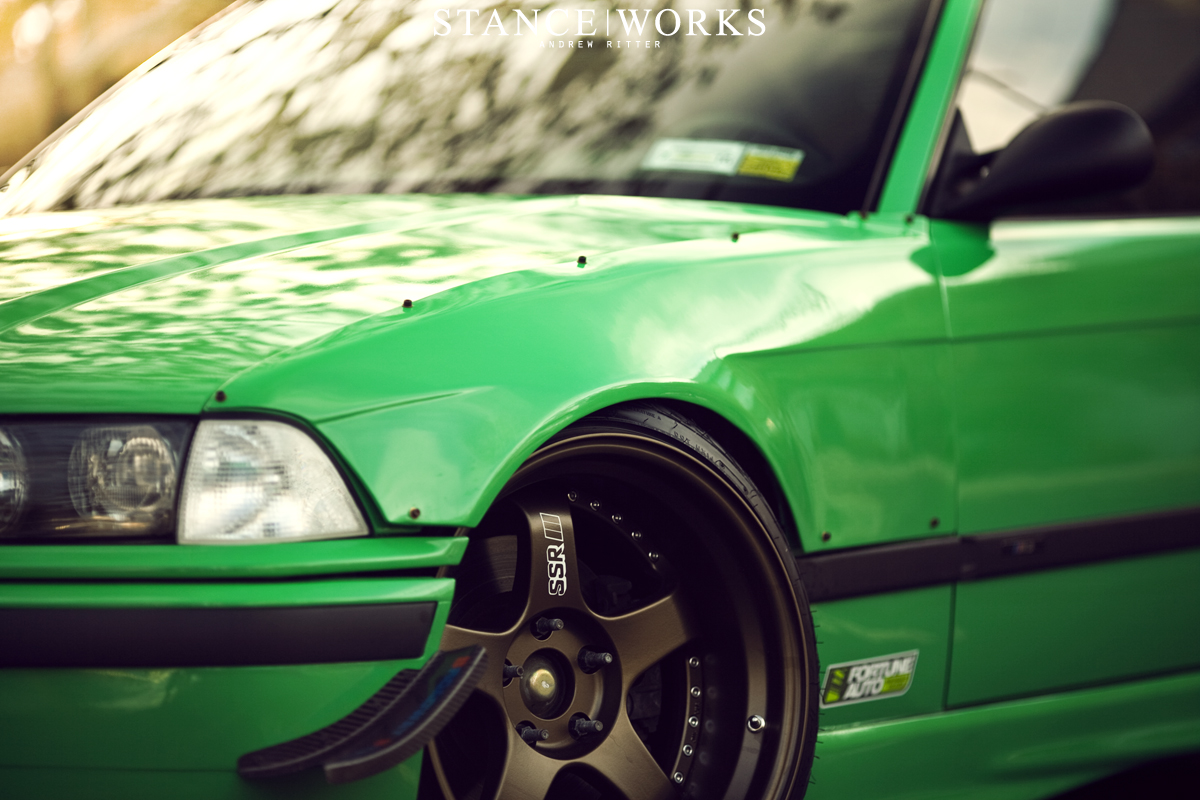 The car was naturally destined to have a serious set of coil overs made for it, which meant a prototype race set of Broadway Static 510s were created. While their standard series of coils has an extremely low ride height as the priority, this car is the test mule for a more performance orientated set. As a prototype, none of the details are final, but it currently features a set of dual digressive shock pistons, filled with Amsoil shock oil, and uses the highest end Swedish scandal steel shims. Similar to their current street oriented line up, the housing are fully threaded, allowing preload through the overall strut length to be set to the owners desire, and custom shock valving and spring rates will be available similar to their current line up. Jaze is very happy with the results and hopes to have more finalized details to share soon. To compliment the serious set of coilovers, a full set of Nerp Tech aluminum bushings were installed, along with fully adjustable camber arms. 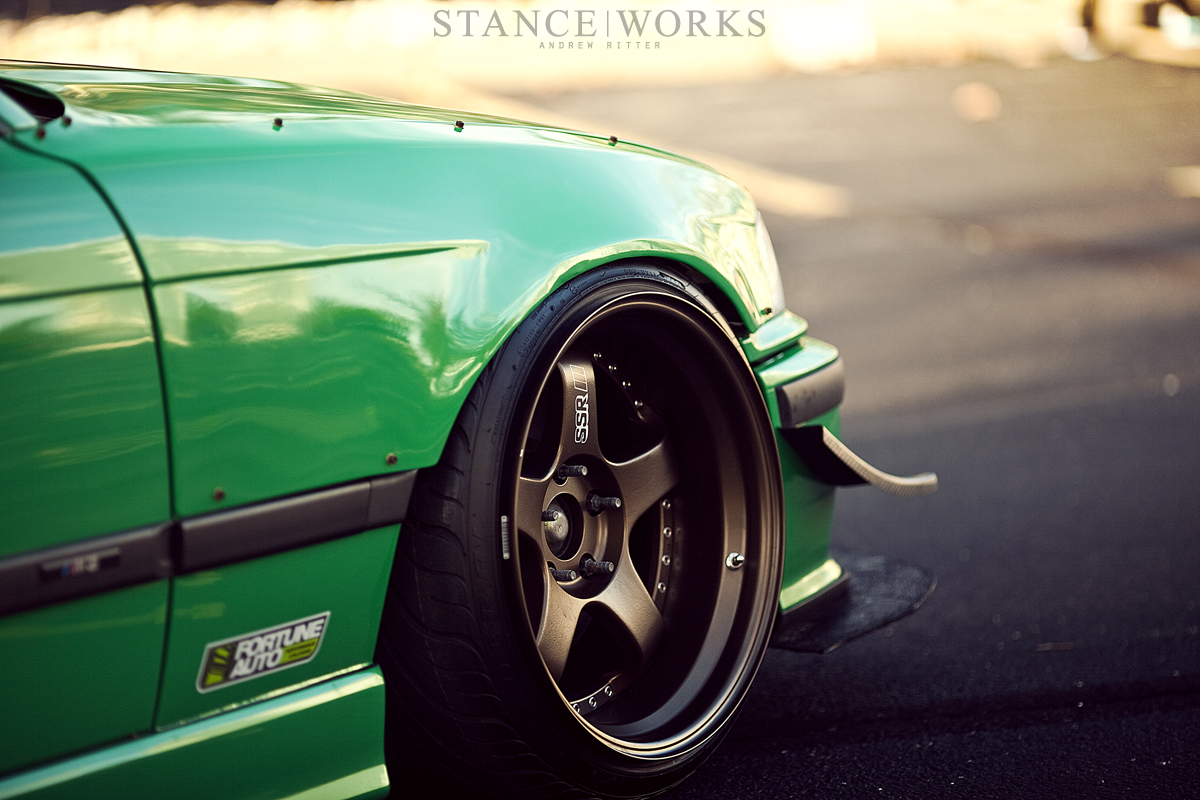 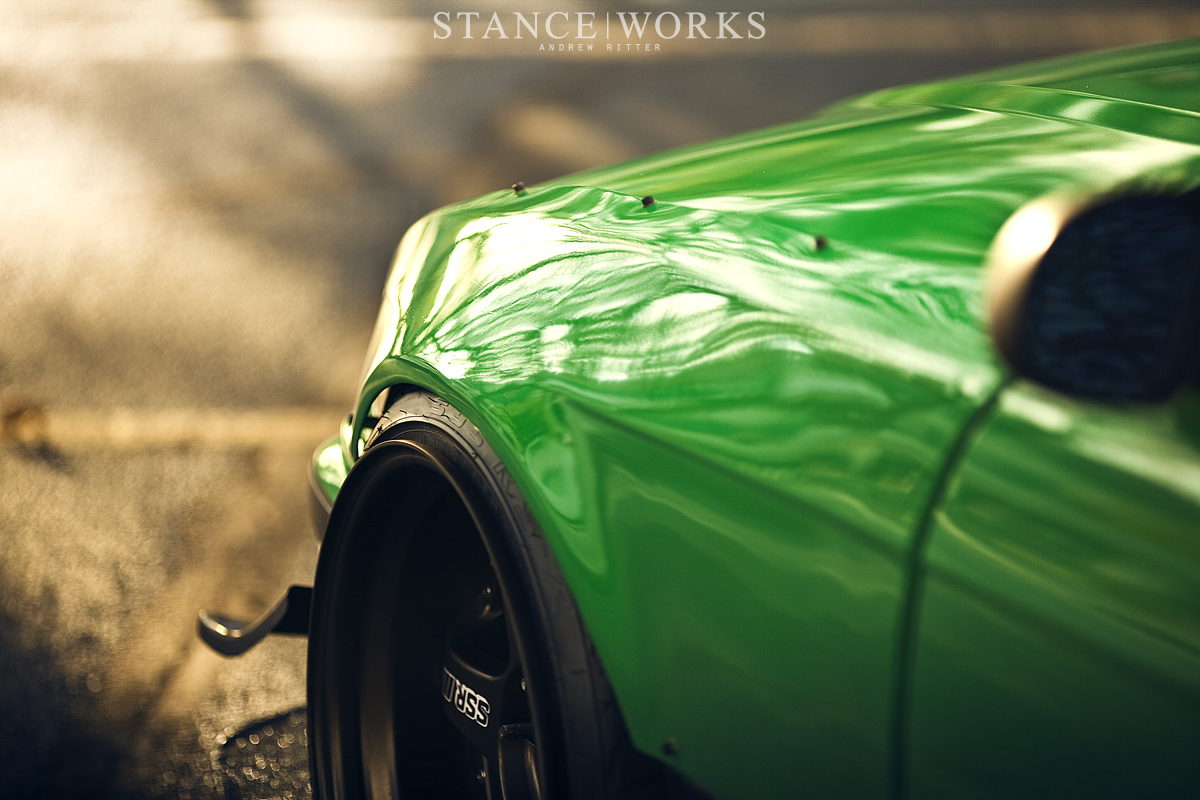 Jaze is one the nicest guys in the car scene, and is arguably too easy to talk to - it’s always difficult to have a phone call run less than an hour. He is proud of where the car is at currently, but is already planning for the future, and in our latest of long talks, the details slipped. While the car has already nailed the time attack aesthetic, while still being obviously european, a big turbo setup is already underway, and he has quite a few other things in the works. He is a perfectionist through and through, and his own toughest critic which tends to create the best cars. We are looking forward to see where the build goes from here, practice certainly already seems to have made perfect. 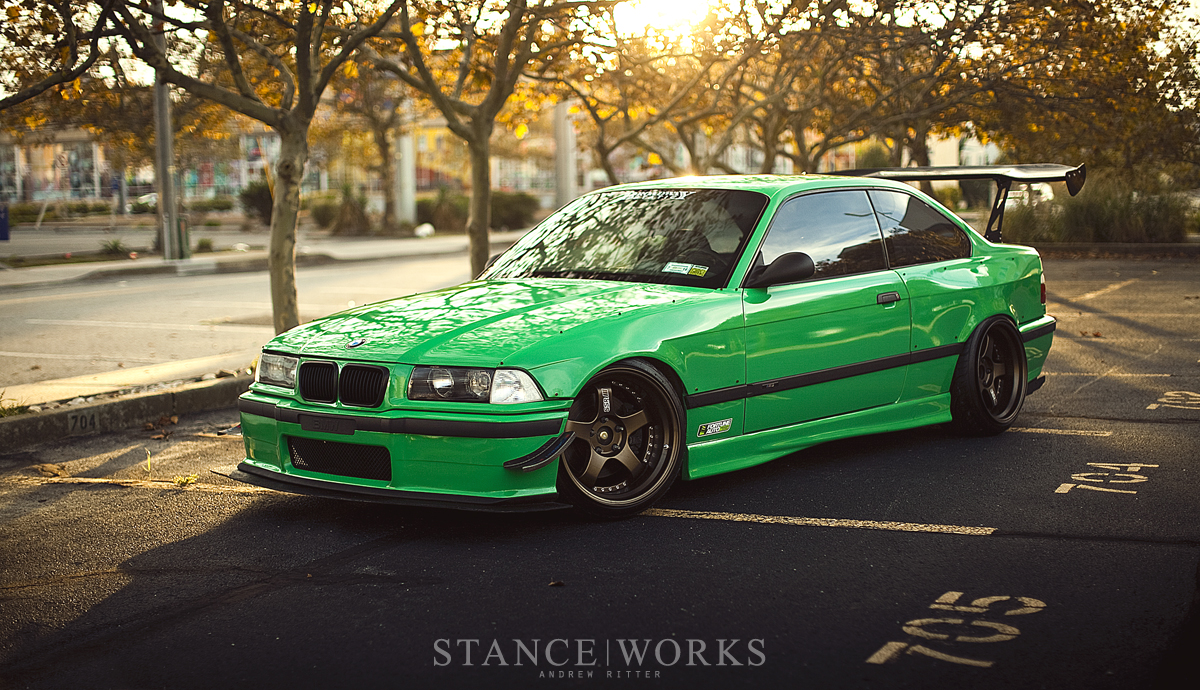