"I hate standing still, and I usually only sleep for three to four hours each night, but I don't mind it at all." Brent Favreau began his story with quite the claim, followed by a sense of skepticism on my behalf; my inner voice thinking "Yeah, right." However, as the story continued, it unraveled into perhaps one of the best I've heard to date. In a narrative that played out more akin to a hollywood romantic drama starring a Volkswagen Beetle than it did anything else, Brent's words had me hooked 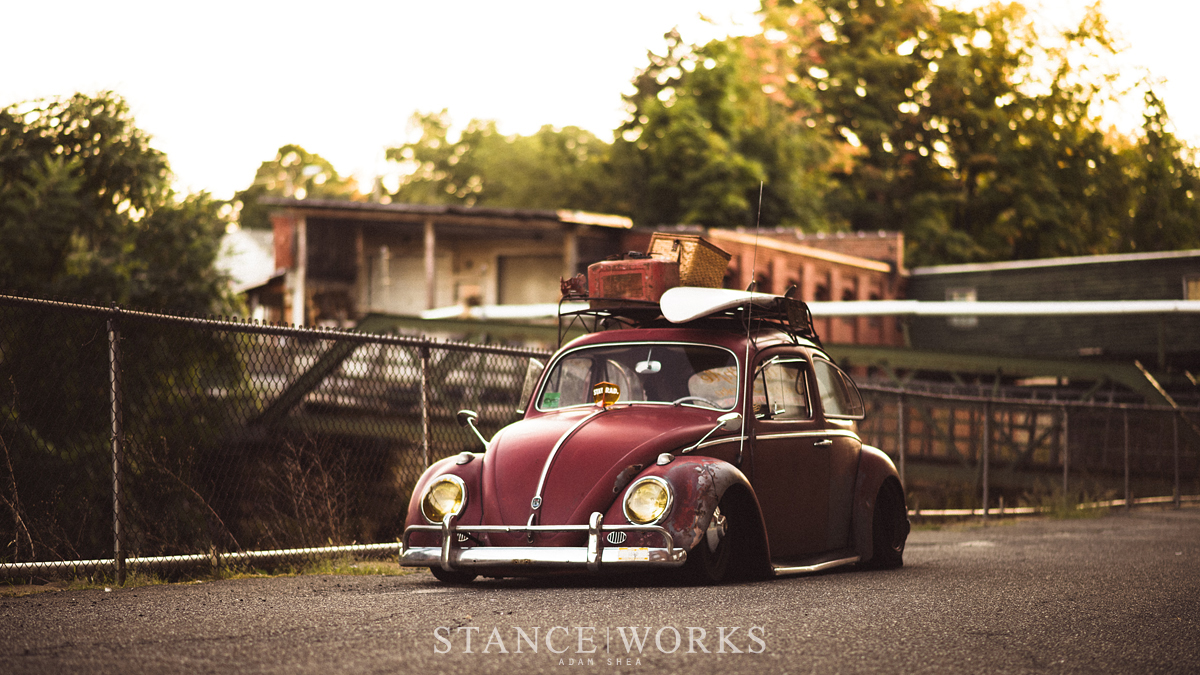 Just yesterday, Brent turned 26 years old - an adult by most standards, but still young in the eyes of our seniors. It's hard to imagine what one can, with effort, cram in to their first 25 years of life, but when sleep is by the wayside, possibilities open. Leaving cars out of the equation, Brent spends his days as a full time student, working to become a physician's assistant. In addition, Brent works full time at an inpatient pharmacy at Baystate Medical Center. On weekends, he DJs weddings and events, and from time to time, he turns wrenches on the side, both for customers, and on his own cars, which he flips to fund personal projects. Amidst the chaos, and while still finding time to balance a social life and the necessities, such as eating, sleeping, and we hope bathing, Brent has found the time to unravel the story of a one-of-a-kind VW Beetle. 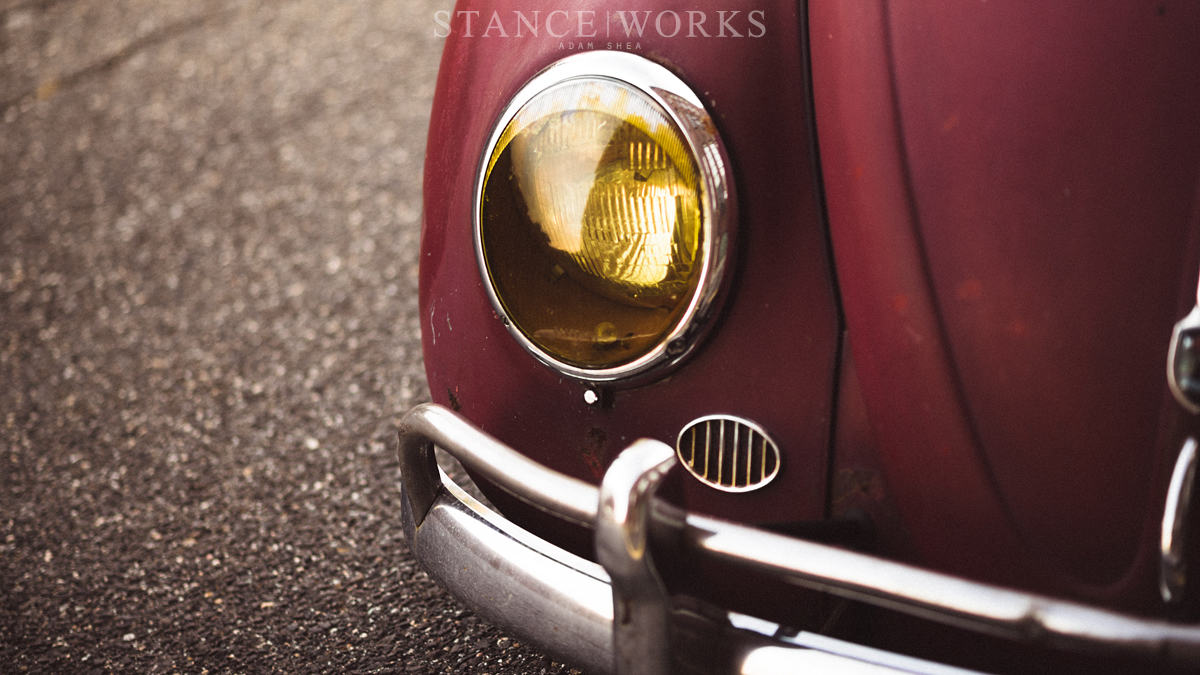 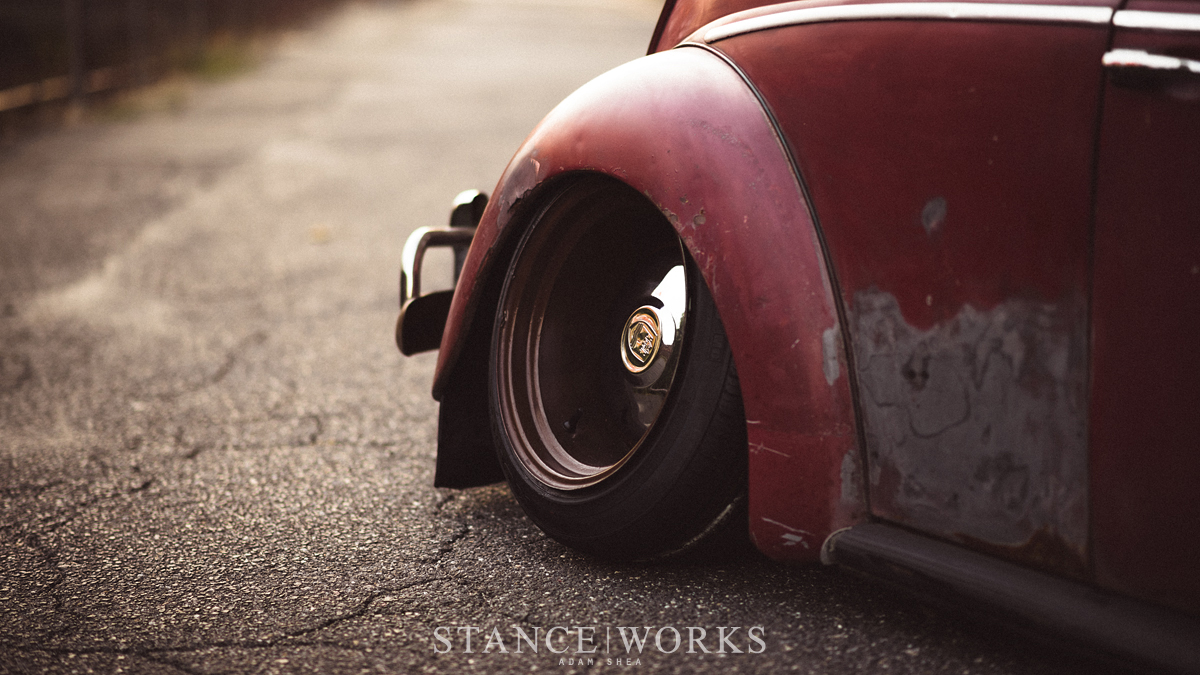 "I grew up in a 'car family,'" Brent tells me, "and I've always loved cars. My pops and uncles are all Chevy guys, so that's where my interests began." As Brent matured, he grew into his own tastes. While he still admits a huge soft spot for first-generation Camaros, air cooled Volkswagens admittedly stole his heart. While it might be hard to pin down when exactly the turning point was, Brent wasn't alone in his endearment for the marque; Brent spent much of his childhood with a family friend and old-timer, a fellow air-cooled fanatic. Perhaps he's to blame? 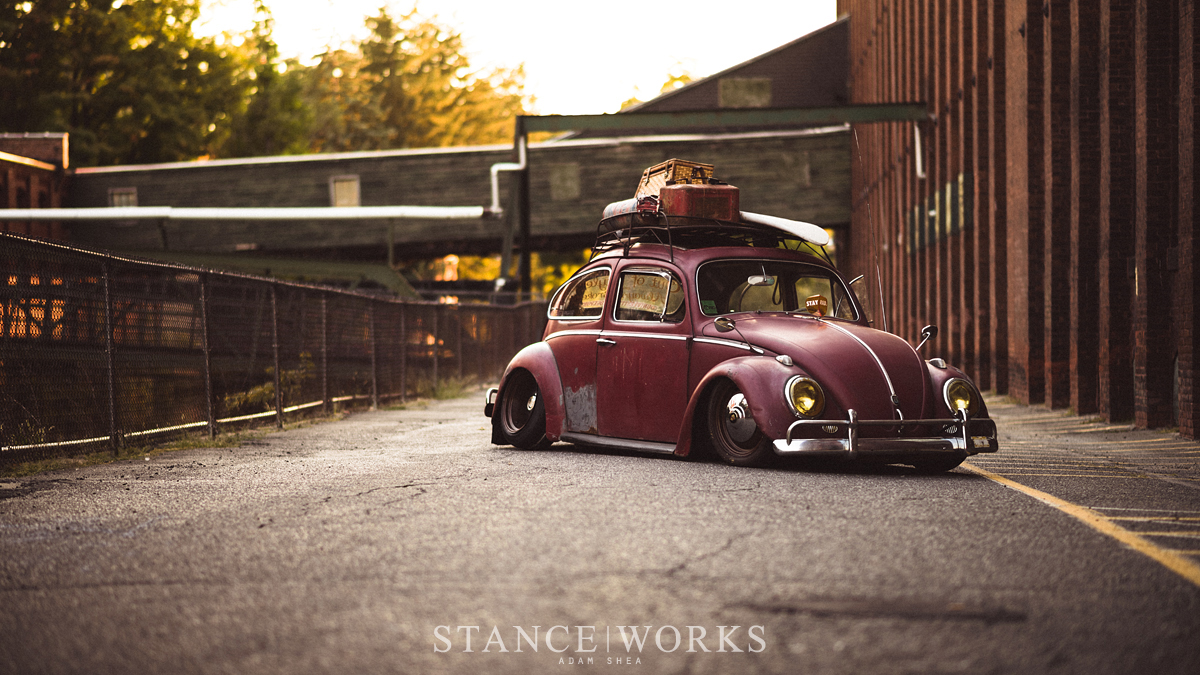 "It took me a few years to convince him I wasn't just a punk kid, and that I had a genuine interest in cars," says Brent. Over time, Brent had acquired a few Beetles of his own, accruing respect and admiration from his elderly friend. "He called me up in early spring to come take a look at some parts that he was getting rid of." Winter had passed, and Spring Cleaning was in order. Brent arrived and picked through the lot, and after making a few selections, he posed the question. "Are you willing to part ways with any of your cars?" The old man had made mention of the red ragtop car before, but Brent had never laid eyes on it. However, mere mention of the car was enough to pique his interest. Without hesitation, Brent asked what it would take to get the car. "$3500." Having just flipped a '62 Corvette on the side, a week before, Brent walked to his car, grabbed the cash, and bought the car sight unseen. 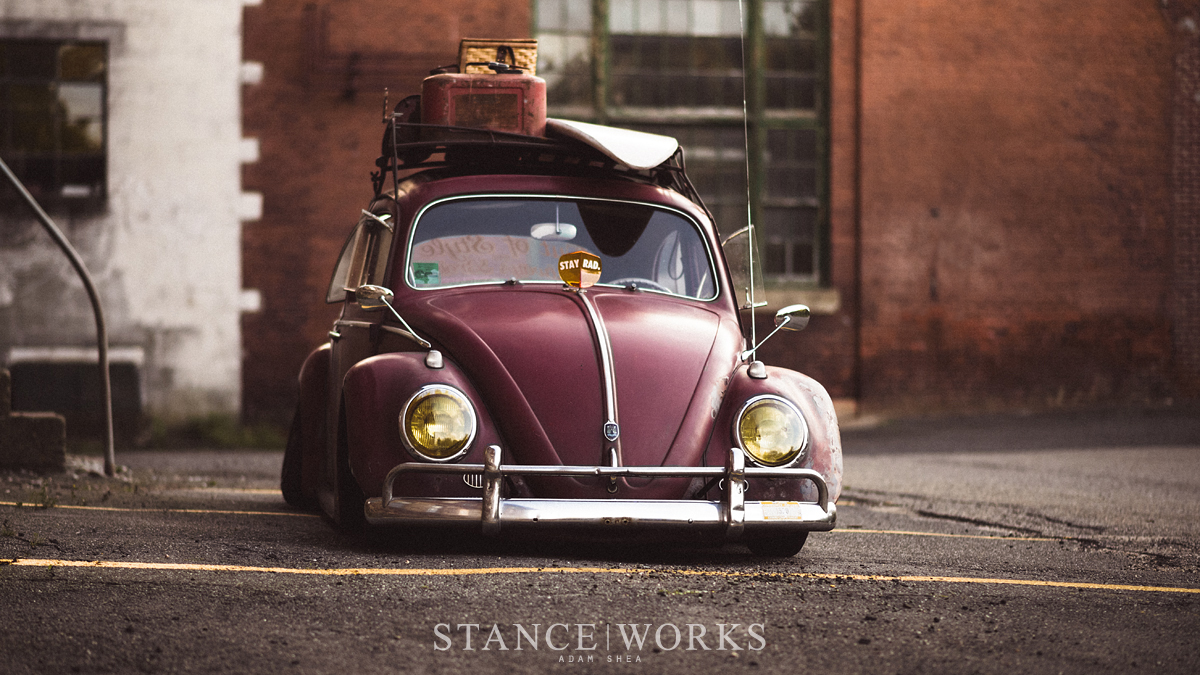 "He was a bit dumbfounded, but accepted the money and helped me drag it out of its resting place." The red over red top Beetle had been off the road for nearly 30 years, with decay and blemishes that told a complete story without a single word being said. The roof rack was bent, crushed by a falling tree; without it, the car likely would have been destroyed. The tail lamps were mismatched, and community college parking passes from the '65-66 school year were still in place. Dozens of flaws, features, and characteristics gave the car an unparalleled level of character, but it wasn't until after getting the car back on the road that Brent began to learn its true story. 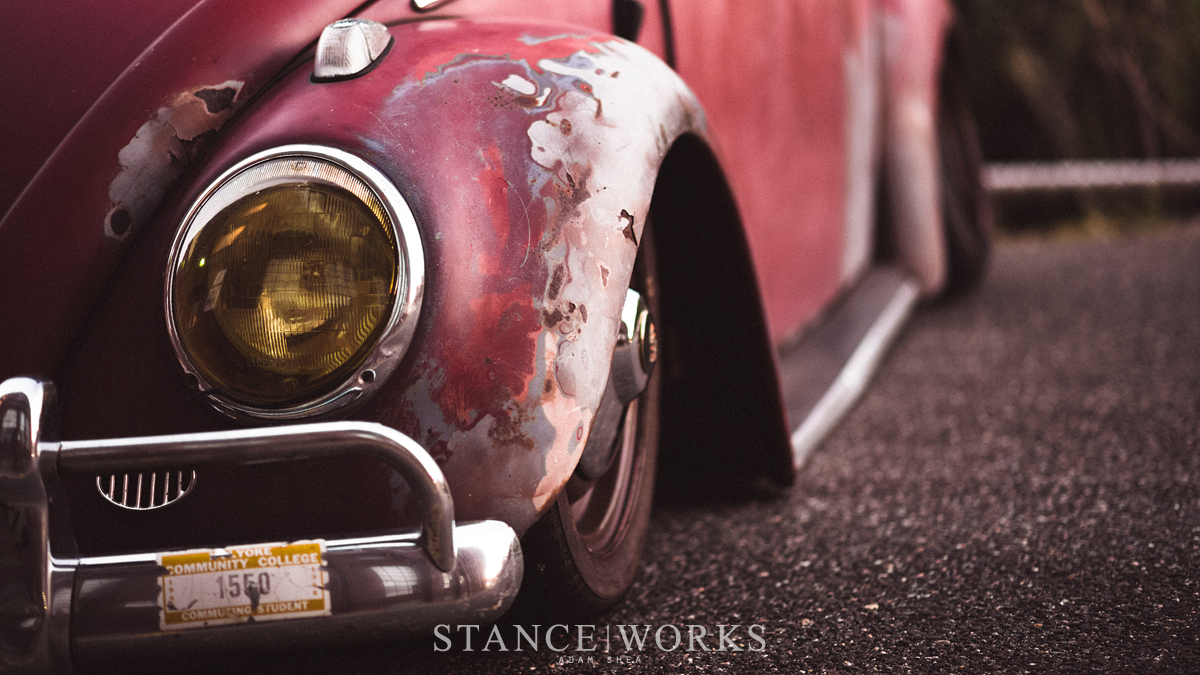 Brent quickly got to work. With his whole "lack of sleeping" lifestyle, it was a mere two weeks before he was able to get the car back on the road  - and lowered too. Brent began with the driveline: the original engine had long since seized in place, and hadn't run since parked. With a little love, and some "cool tricks" taught by the old-timer friend, Brent was able to get it running once again, and he seems confident in its reliability. "It's bulletproof." 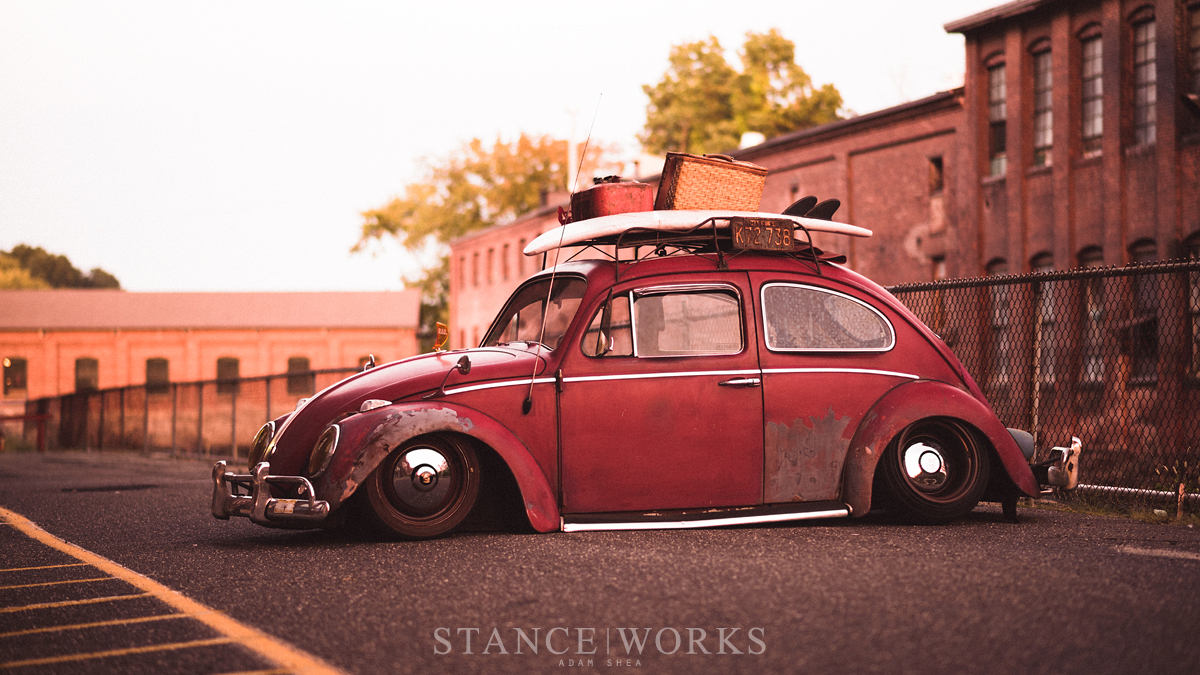 As important as going is stopping; Brent replaced the brake components to make sure the car was roadworthy and safe to drive before moving on to the suspension. Brent began working on cars as a young child, beginning with bodywork and sanding in his father's garage. Since, he's become a competent fabricator, willing to get his hands dirty. The stock front beam was pulled from the car, and narrowed 4.5 inches, with adjusters welded into place. Brent pressed in drop spindles, poly bushings, and fitted new links and king pins. He narrowed the tie rods, and lastly, he fabbed up new headlight buckets to allow the front wheels to tuck completely into the front fenders. In the rear, Brent fabricated new extended and "Z'd" spring plates to bring the rear end down to where he wanted. 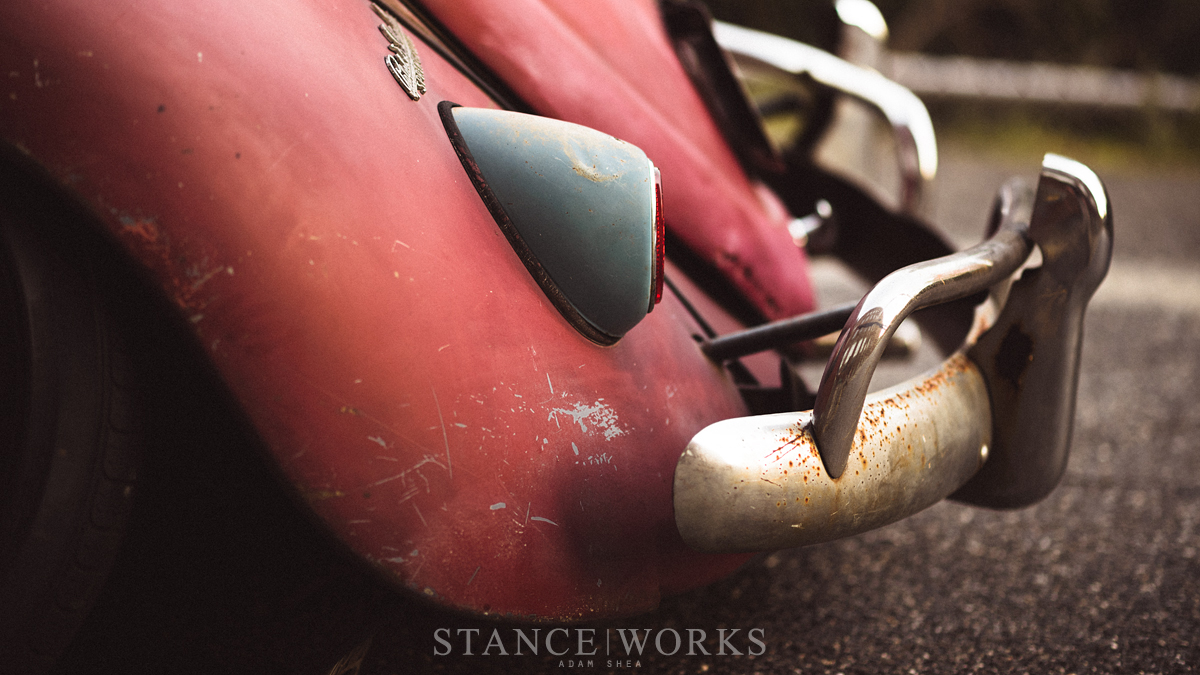 Brent was aware that the car had been a local one all its life - a metal dealership badge sat atop the rear fender, still riveted into place, signaling Springfield as its hometown. After digging in to find out more about the car's history, the puzzle pieces began to fit together. "If a dealership had sold a certain amount of cars the previous year, Volkswagen would send them a 'dealership' car, which typically had every factory option available. Luckily, my Beetle is one of those." It explained many of the rare and strange options the car was outfitted with,  such as the fold-down "Camper Package" shift lever, deluxe radio, optional fuel gauge, and the rare pop-out windows. 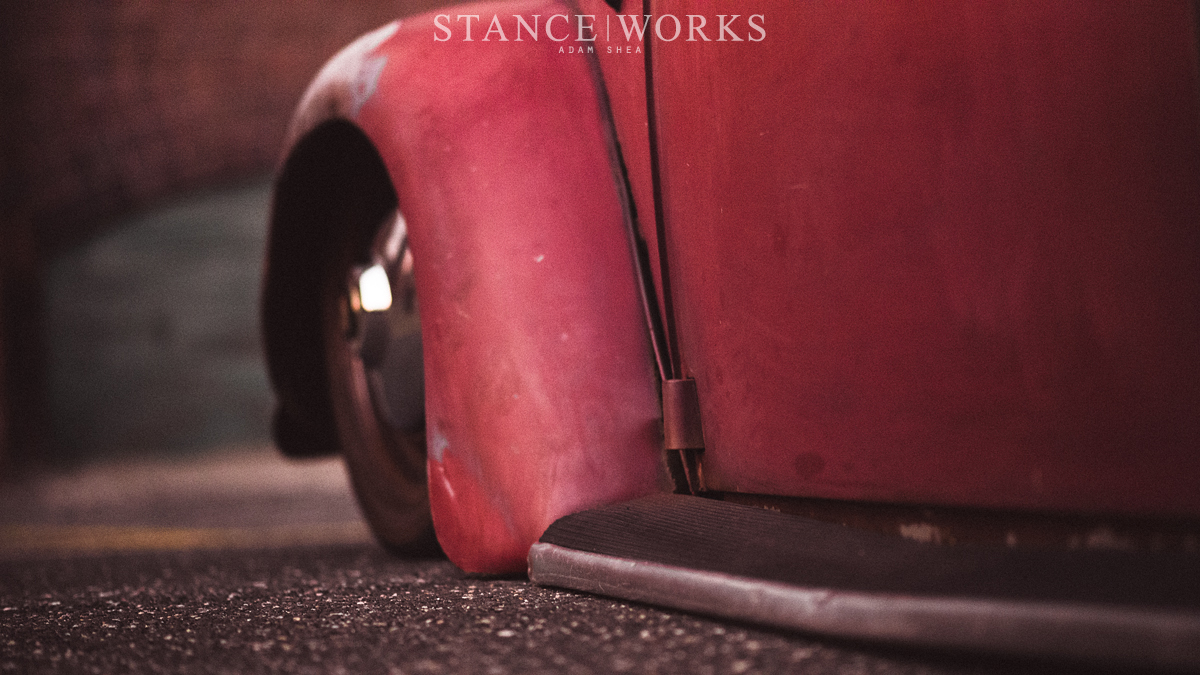 Once he had worked out the kinks, Brent sought to drive the car as often as possible. "It's always fun, and great on gas." Brent mentions that people always seem to have stories to share when he's out and about in his car; the Beetle is universally loved. Driving the car as often as he does had another benefit: increased visibility. Only 200 red ragtop cars were made in 1961, and with the other tell-tale signs, from the car's unique color, to the badging, and even those parking passes, the car was easy to recognize. 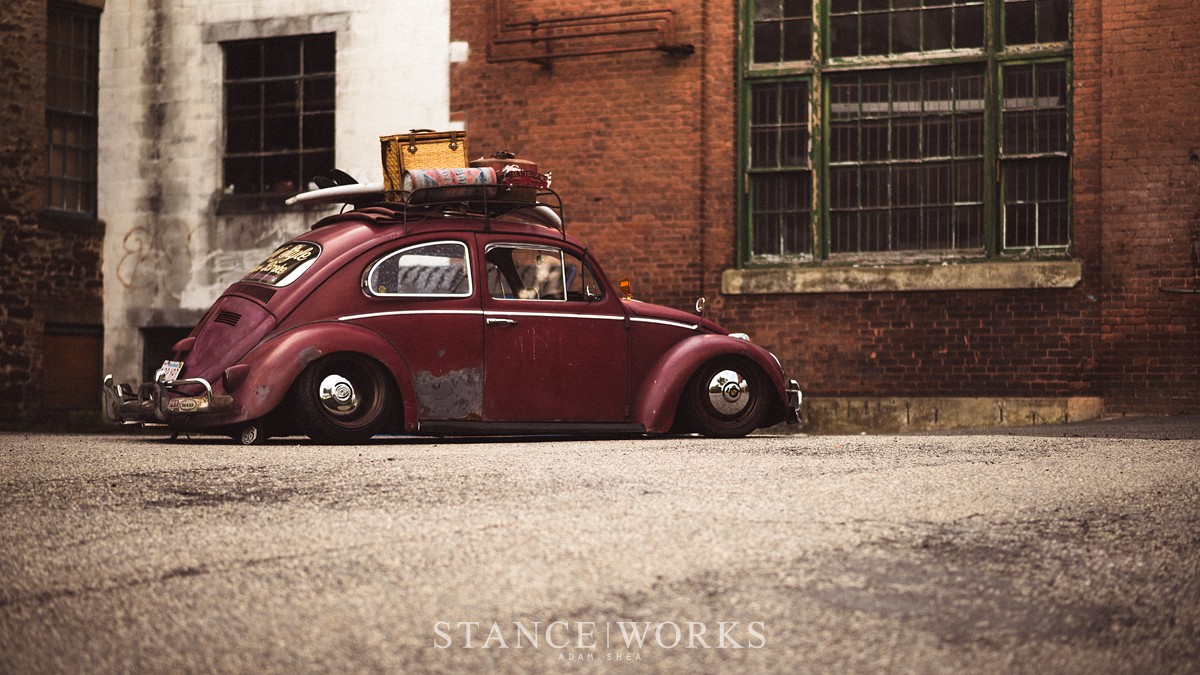 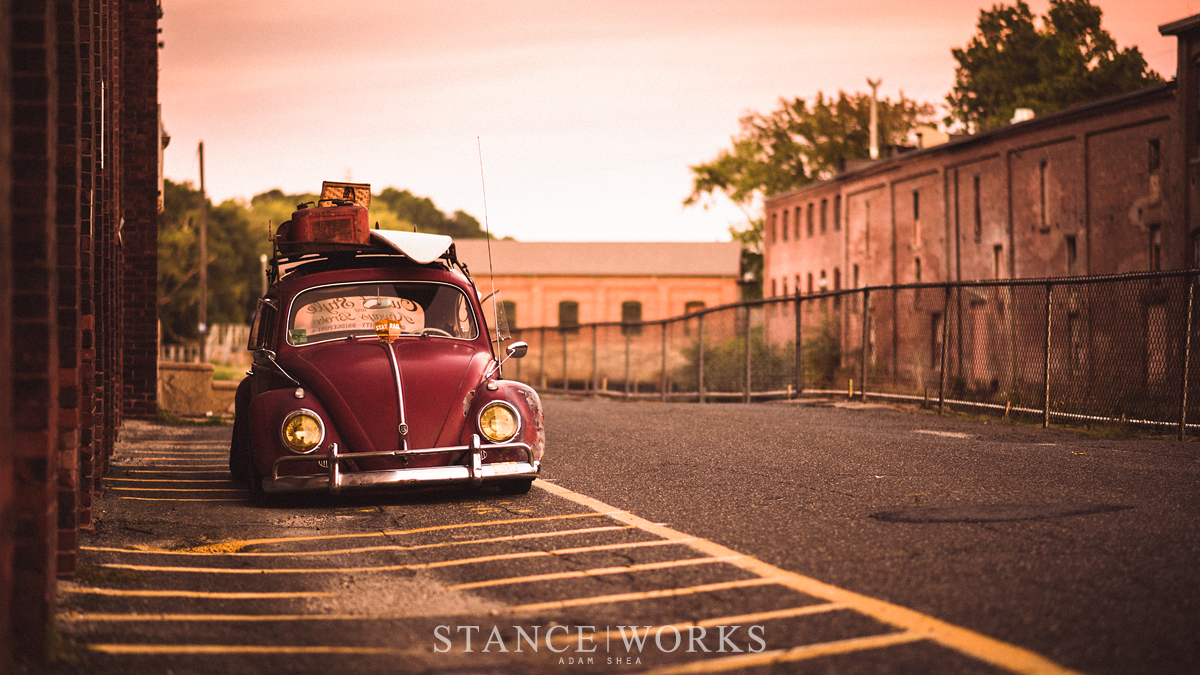 On a summer afternoon, a car began to follow Brent and his Beetle home. He was followed into his driveway, and after getting out of his his car, he was met by an older woman. By pure chance - or fate, if that's your preference - it was the car's original owner that had spotted him, and her pride and joy from the past. Through a wall of tears, she brokenly told the story - her highs and lows - of the little red car. The story of the car continued to grow richer, and Brent was certainly a proud owner. 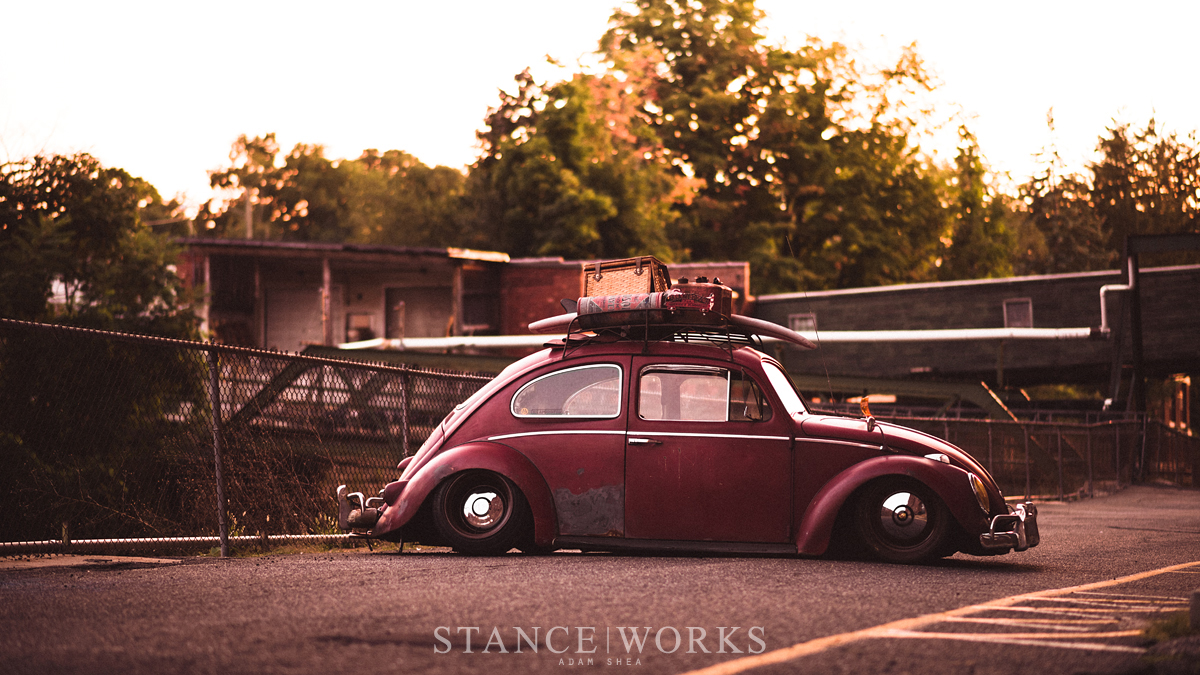 Brent continued to sink time and money into the car, tracking down trinkets and tidbits to truly tailor the car to his liking. "The speedometer is out of an early euro oval-window, so it has a larger speedo needle and it's in KPH. I scored the early oval seats in a trade, and I got the swan neck mirrors and diffuser over winter, and finally picked up a vert deck lid at the last swap meet." They're intricacies no one else may notice, but that's relatively unimportant to Brent. However, despite his time spent fixing, repairing, and modifying the old car, Brent eventually felt the need to move on, and sold the car to a friend in Milwaukee. 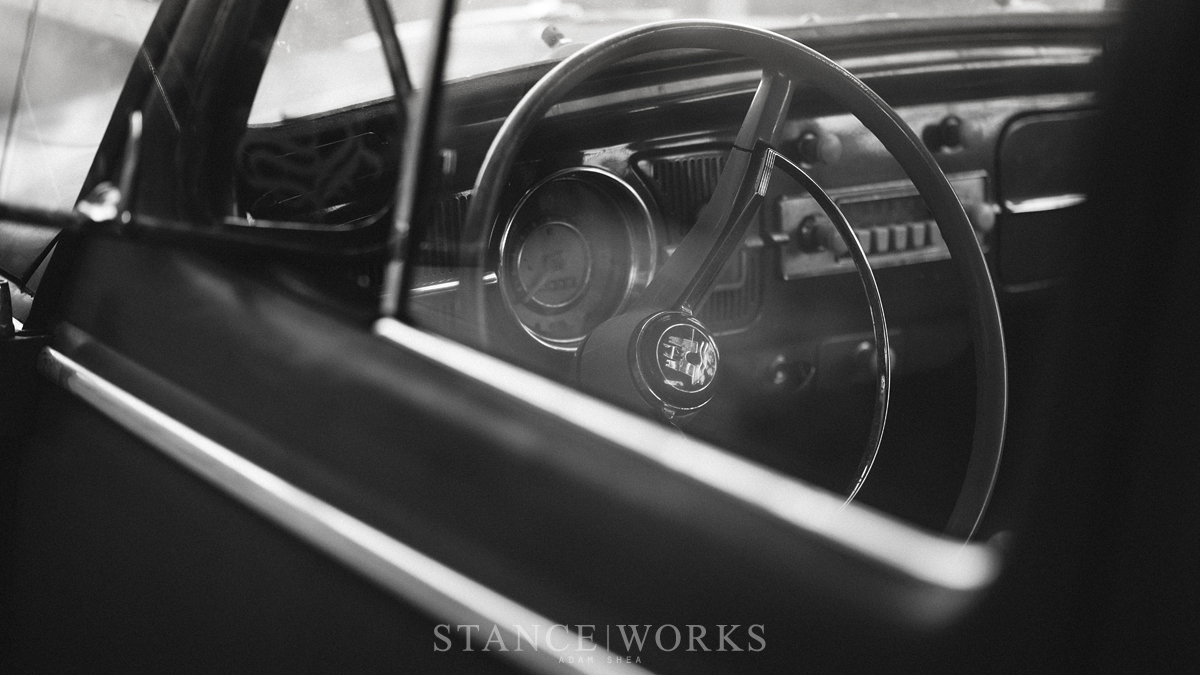 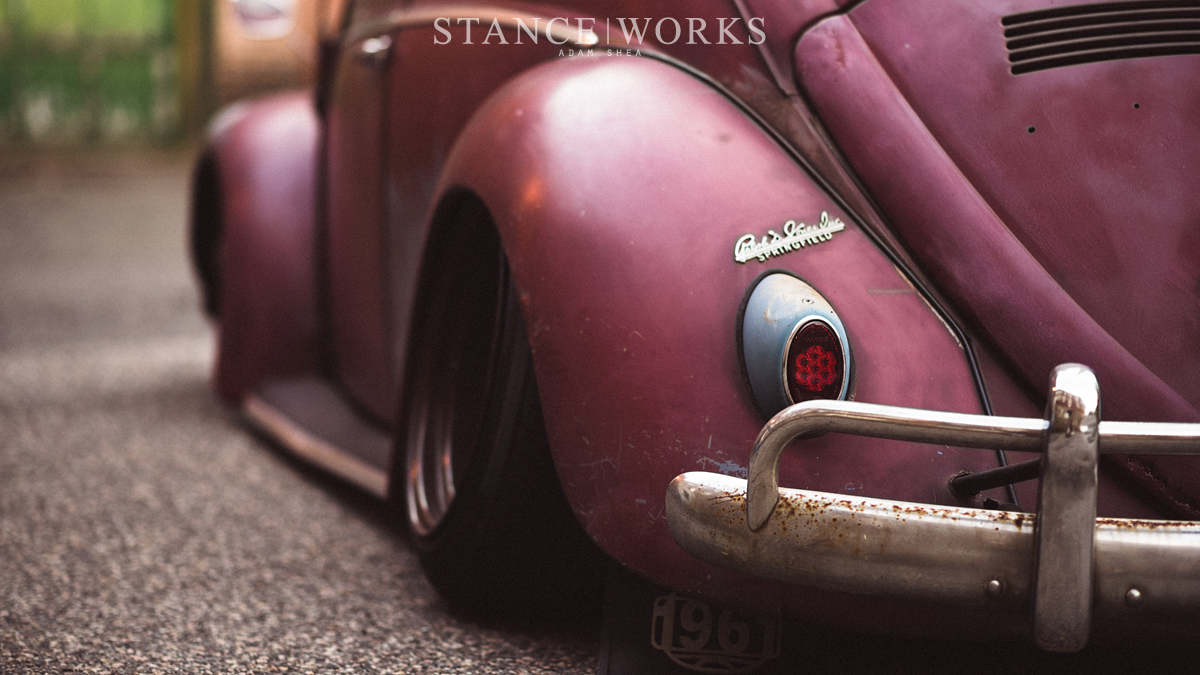 When Brent was 11, he had a job washing dishes, and was a "gofer" for a local paving company - his hard-working no-time-wasted attitude has obviously been around for some time. His dad had found a'69 Camaro, in very rough shape, and promised Brent that if he could come up with half of the money to buy the car, he'd chip in for the rest. After some time, Brent had saved his pennies, and the two went and bought the car. From then until his Junior year in high school, the two went through the entire car, and come time for Brent to get his license, he had a very cool first car... "unfortunately I had to sell it to pay for college."  The pain of regret is a powerful one, but it serves a great purpose. 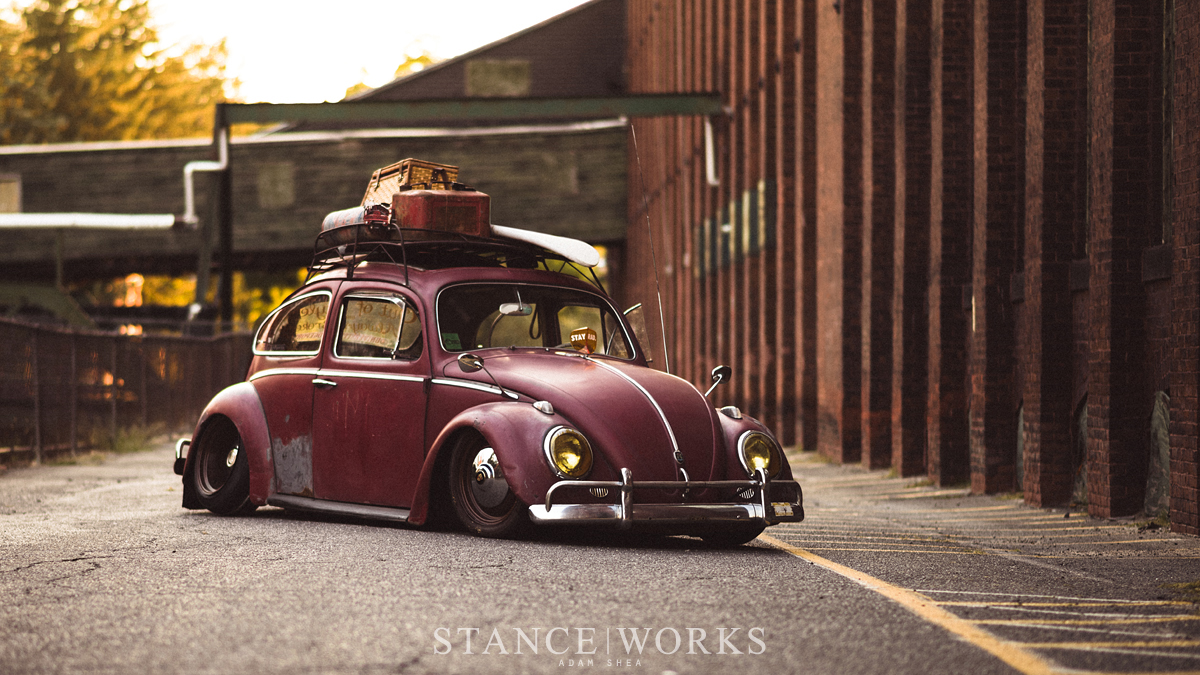 It was almost immediately that Brent regretted his decision to sell the Beetle. "The car's history is here in Springfield, and it should live out its days here," he said. After serious discussion and some careful persuasion, he was able to buy the car back, minus a few of the rare parts he had accumulated and fitted to the car, but he was grateful nonetheless. 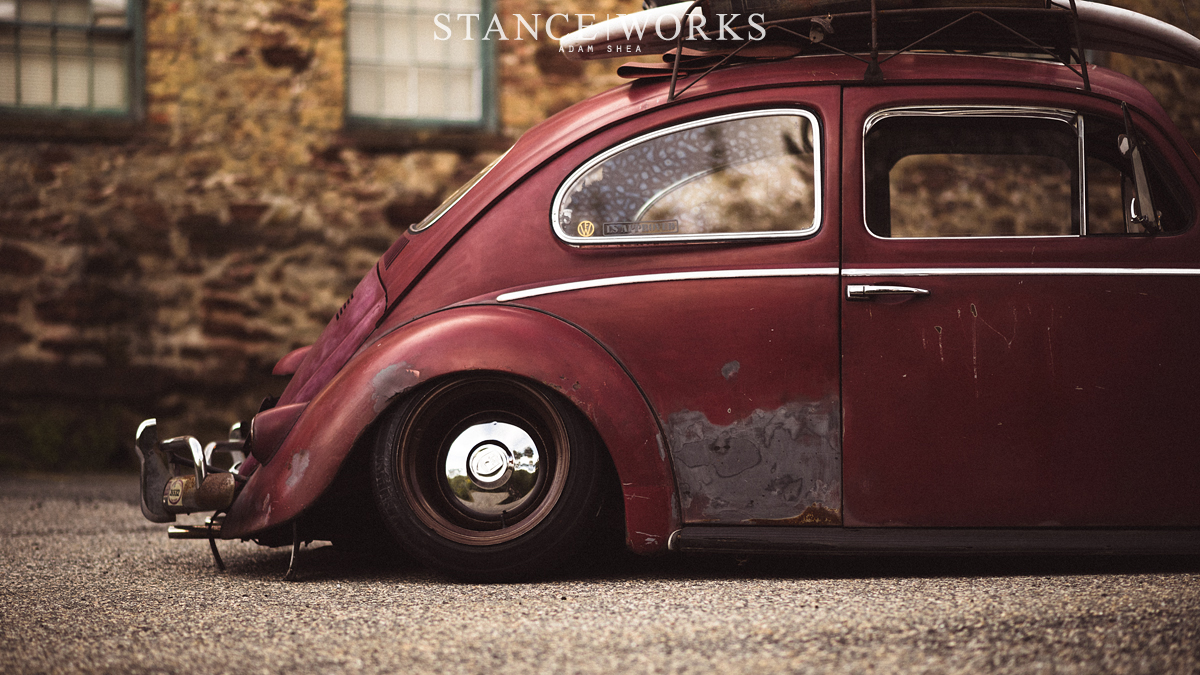 The car is back in his possession once again, and the build continues. "I still have some more parts to accumulate but have all the bigger stuff crossed off the list. I love collecting rare parts and this car gave me a jump start in that aspect, but I still am constantly hunting for anything unique.... That's why I love early air cooleds, there's always going to be something out there that you've never seen no matter how knowledgable you are." Perhaps someday he'll take the place of his old-timer mentor. But what he loves most about the car is irreplaceable - "A few examples would be the dealership badge or the community college parking passes from the university of Bridgeport. To me that's something you can't go buy or make, and as dumb as it sounds, in my mind it makes it priceless." 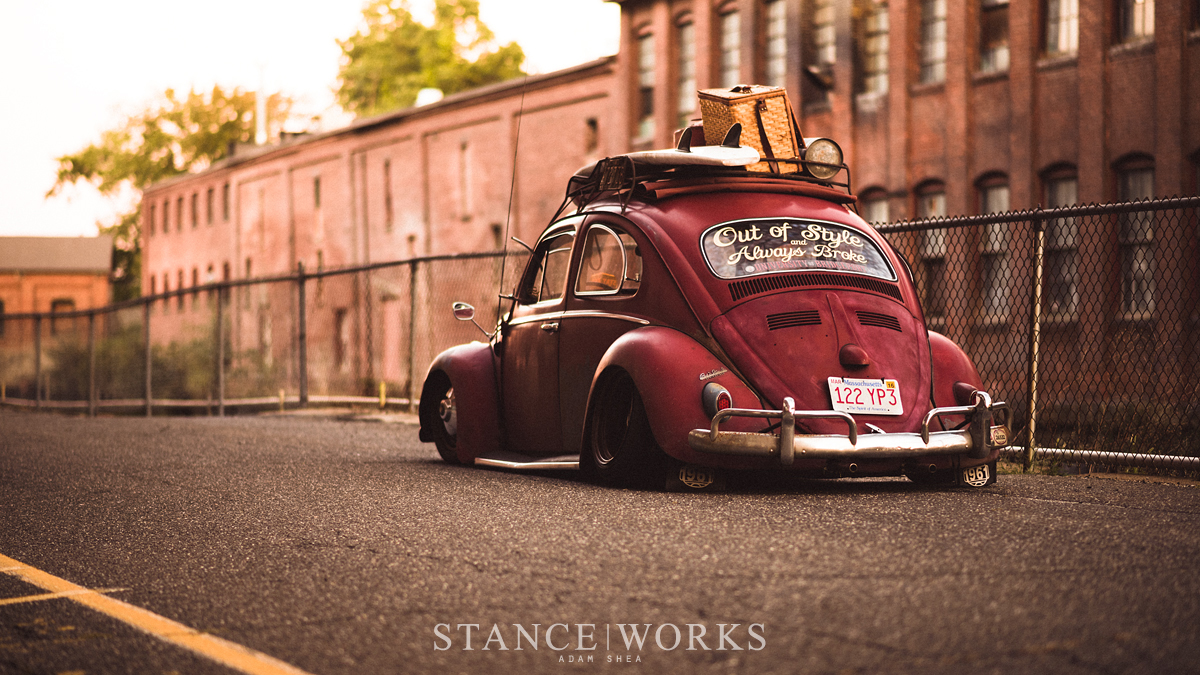 Despite the fact that Brent says the car will never truly be complete, the Beetle is as complete as it needs to be. The car is turn-key, and starts up every time. Brent touts that he's not afraid to drive it anywhere, and that, given flat roads, he'll be driving to and from anywhere possible, for many years to come. This winter, he hopes to replace the original engine with a bigger counterpart, and to upgrade the 6-volt electrical system to the more modern 12-volt system, but these changes come from desire, not necessity. 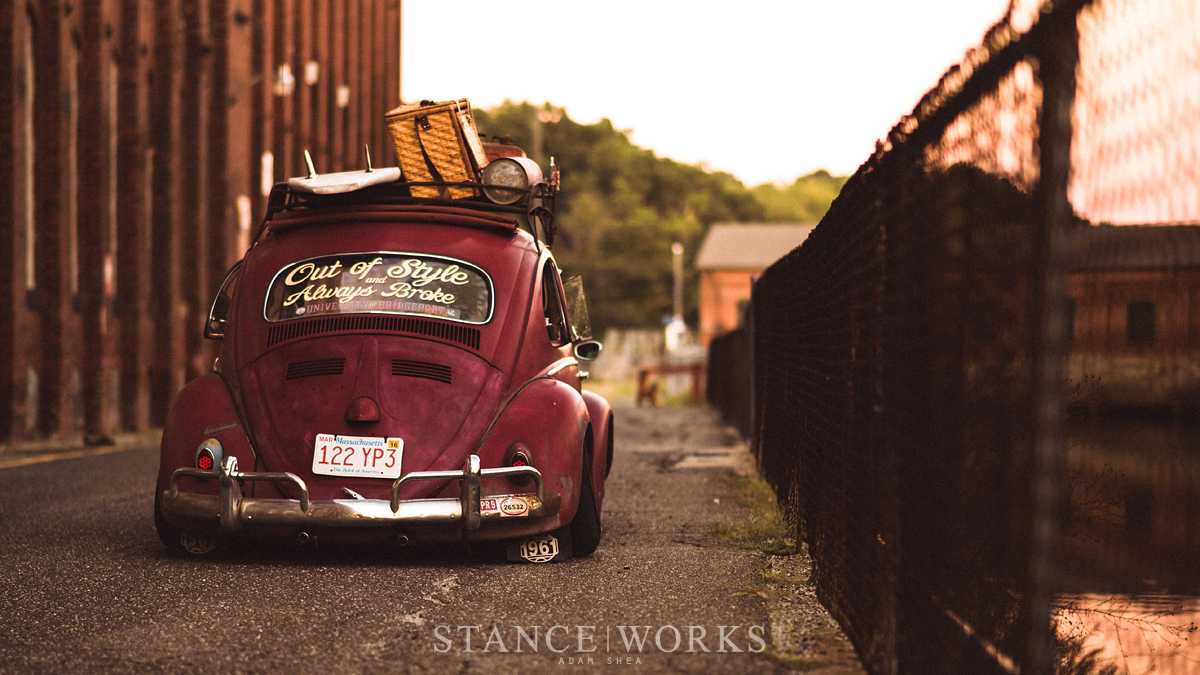 Brent has worked hard to bring the Beetle back to life, and to ensure that its rich and characteristic history are both continued and fulfilled.... but given his track record and his need to turn wrenches, I had to ask what comes next. "I have a 65' split window bus I've been building for about 4 years," Brent tells me. "All original paint, but other than that, everything's been replaced or fabricated." He explains that the bus was nothing short of dilapidated when when it came in to his possession. "It was sagging in the middle due to how bad it had rotted. The whole roof was caved in." The lack of a motor and the electrical nightmare that had been instilled by past owners and mechanics were the least of his worries. "The bus has fought me since day one, and it seems like every time I go to work on it, a friend or family member's car breaks, but it'll be done soon enough." With that attitude, I'm anxiously awaiting what Brent does next.