A fear that every car enthusiast has looming in the back of their skulls is the chance that our beloved vehicles could be stolen; vehicles that have emptied our bank accounts, split our knuckles, and wicked our sweat as we wrenched away. Among those unfortunate enough to be victims of car theft, some decide to never return to the car scene. Others, however, resiliently come fighting back; guys like Justin Presson, whom had his own Nissan 240sx snatched away from him. Even though he experienced one of the most defeating moments of car ownership, he came back strong with this vintage 1979 Toyota Corolla, with panache that hardly goes unnoticed. 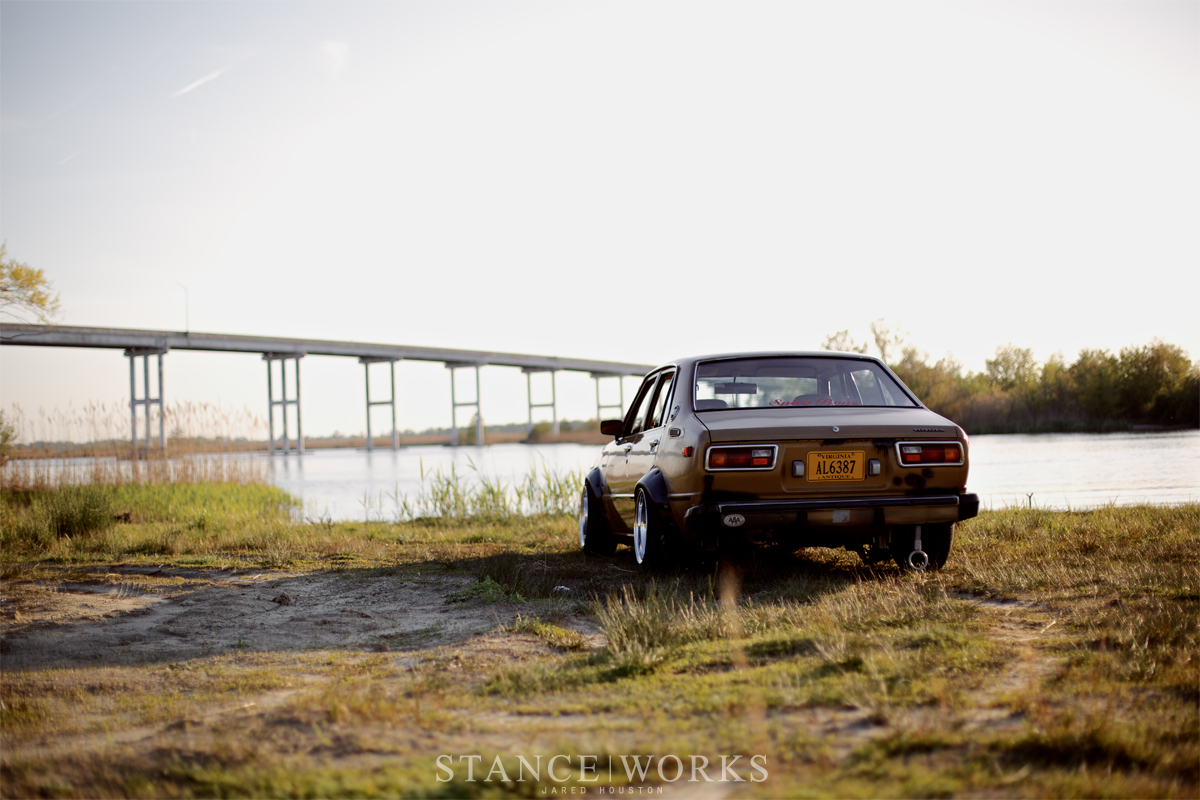 When most think of a Corolla, a bland sedan comes to mind, with every edge rounded off, leaving body lines that go unnoticed. Yet somehow, the Corolla dominated the automotive market for decades now. The Toyota Corolla of the '60s and '70s, though, was a far cry from the modern blandness, as they featured creative body lines, and each model seemed to boast a certain flair, making even an economical sedan have the potential to be something amazing. 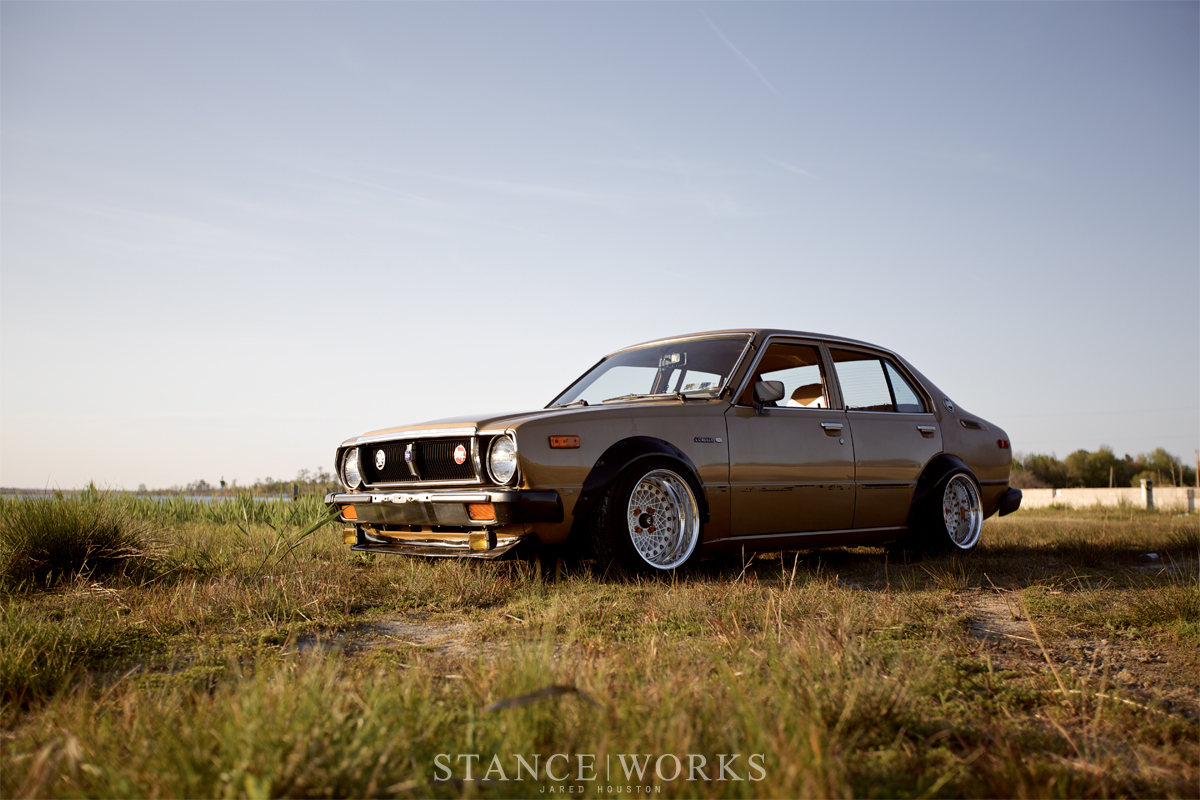 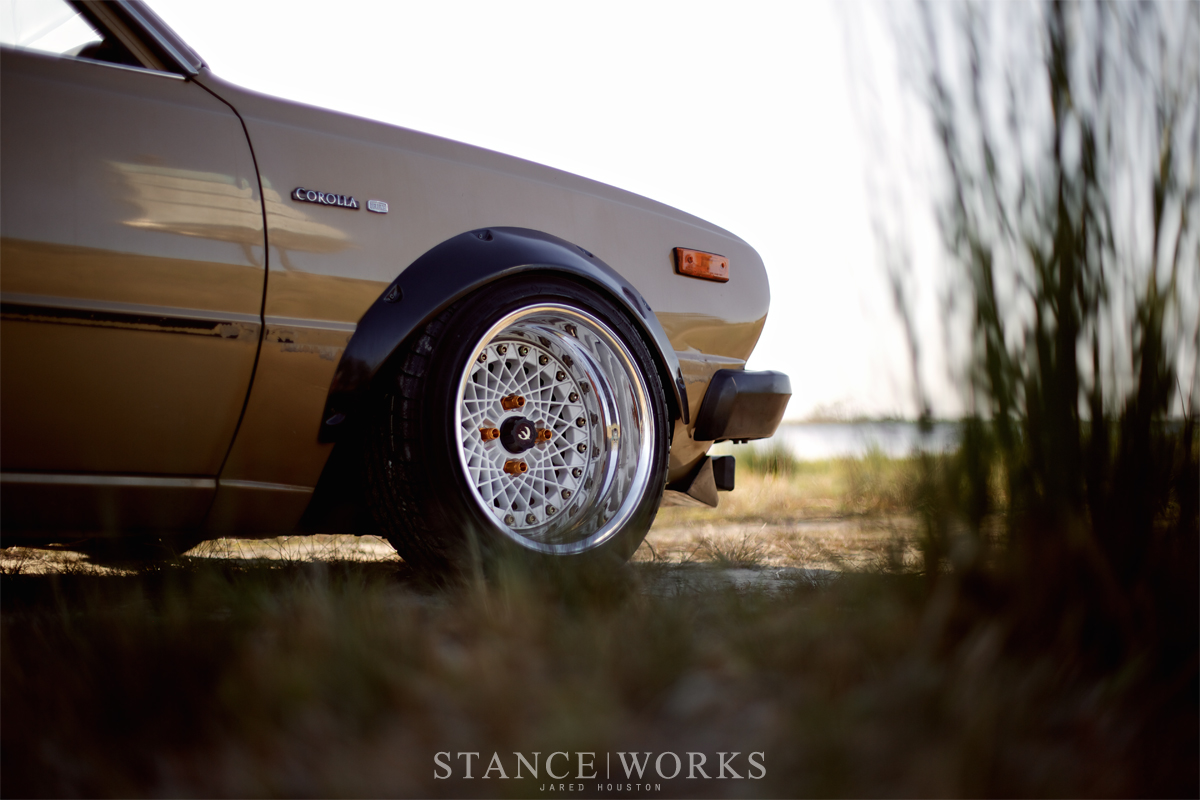 Justin, having had his beloved 240sx stolen, found himself searching through Craigslist for his next project. He stumbled upon a 100% bone stock and original 1979 Toyota Corolla TE31. The car had been listed for just two short hours, and it was in fantastic shape, representing a prime example of the Corolla’s third generation. Justin had been looking for the best “bang for his buck” due to his current circumstances, and he quickly plucked this classic Corolla, which fit the bill perfectly. 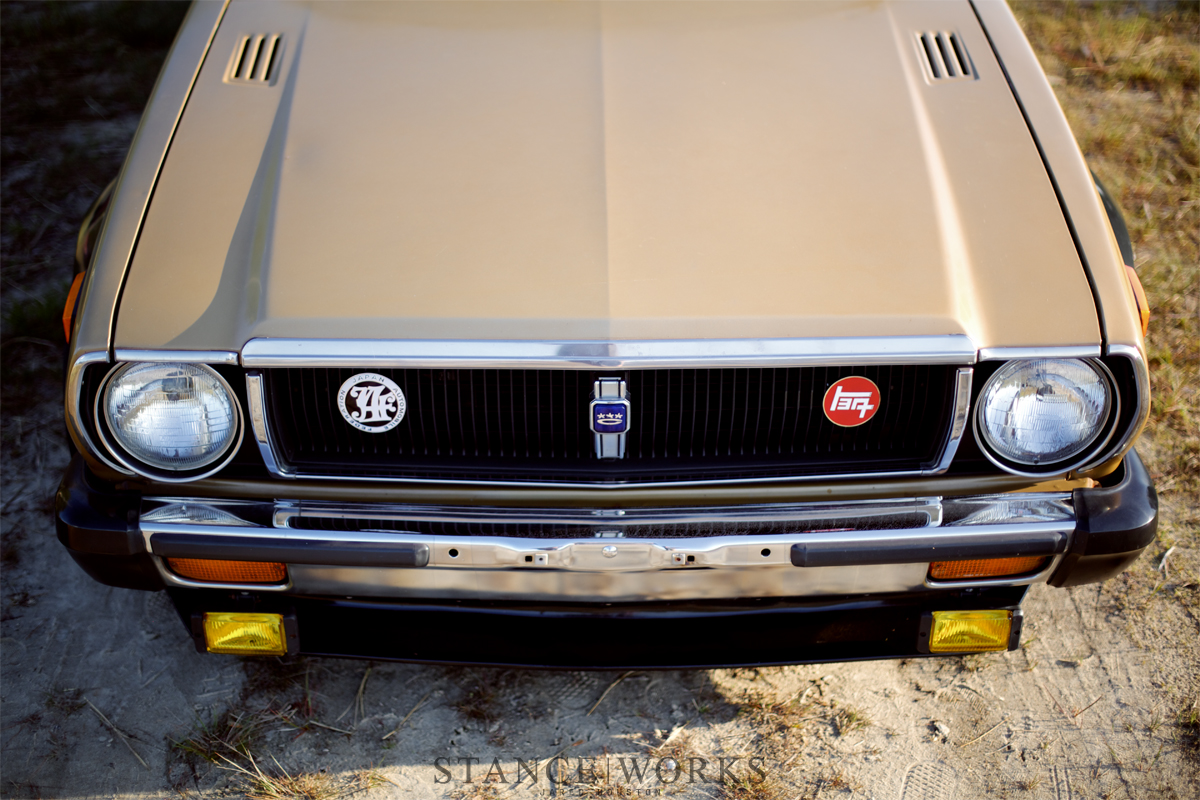 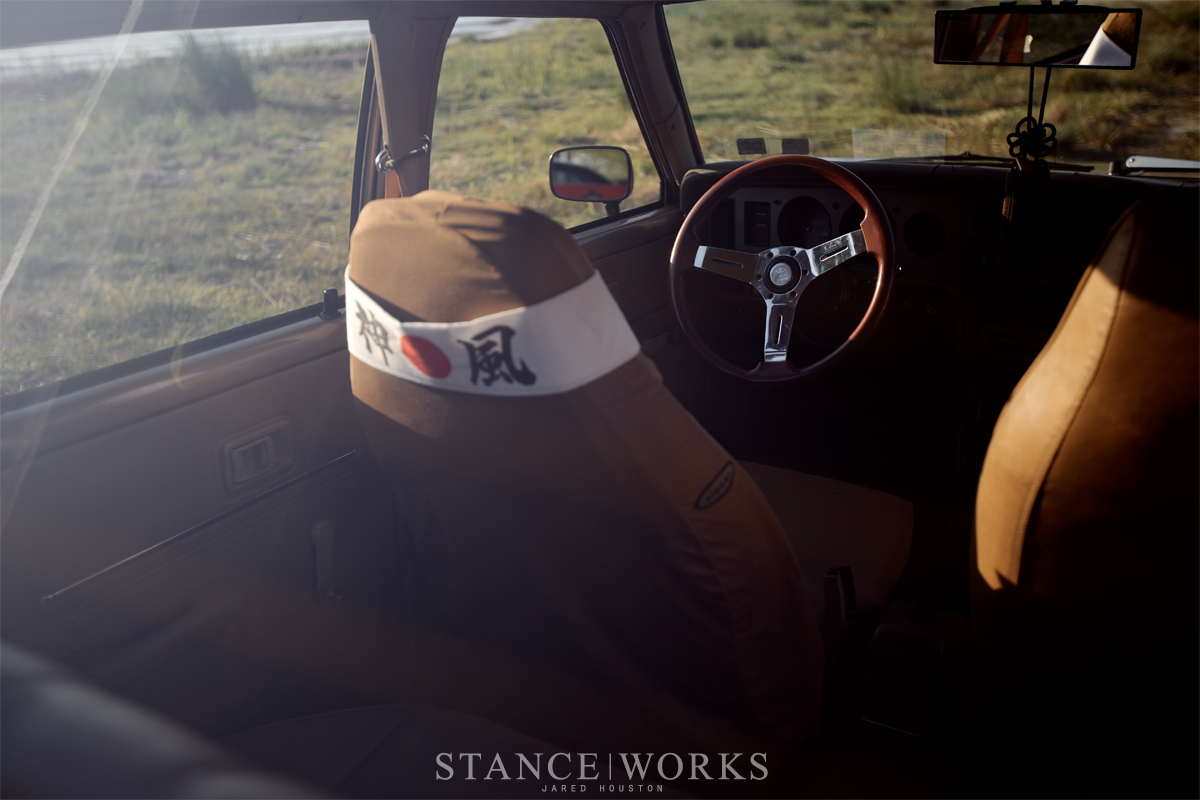 With his love for vintage Japanese cars, he knew that he wanted to create something with a classic and period correct ambience, but a car that also displayed an aggressive look. To accomplish this look, Justin had modify a chassis, against the approval of some diehard Toyota fans, since they would be irreversible changes to an original TE31. This wouldn’t phase Justin though, as he focused in on the vision that had formed in his mind just after this Corolla fell into his hands. 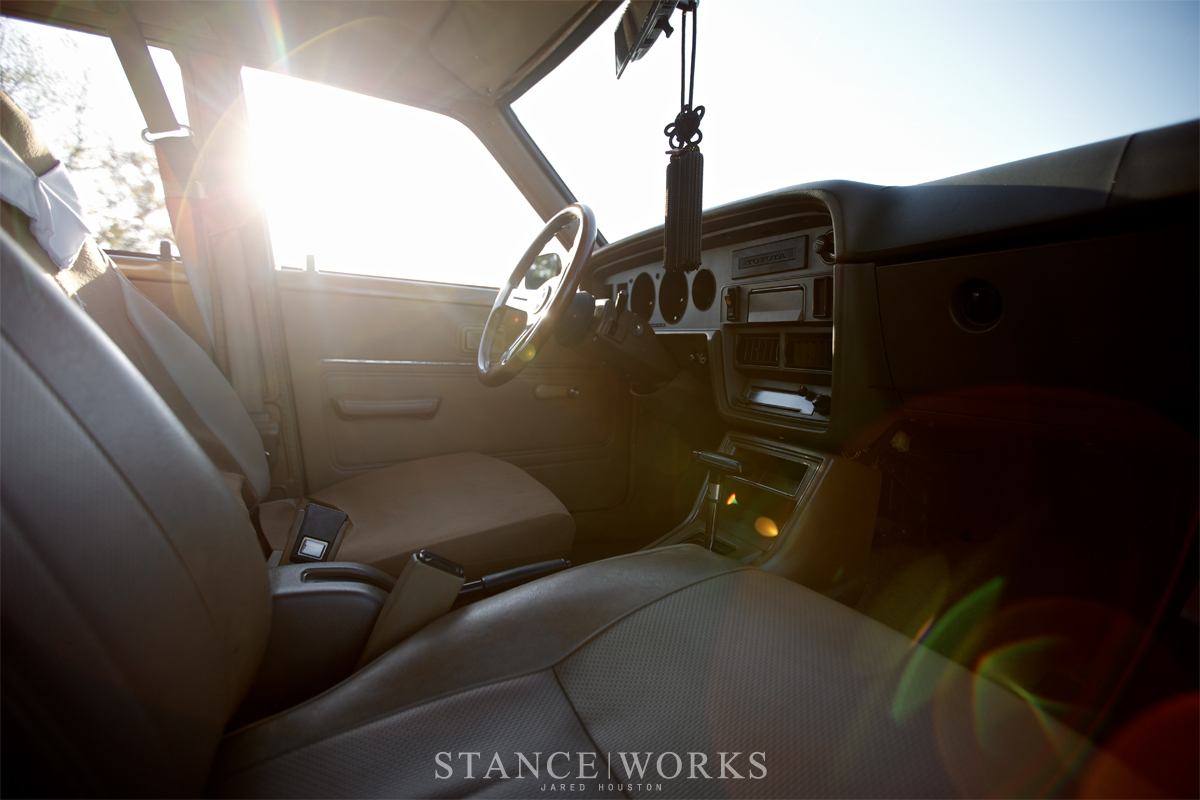 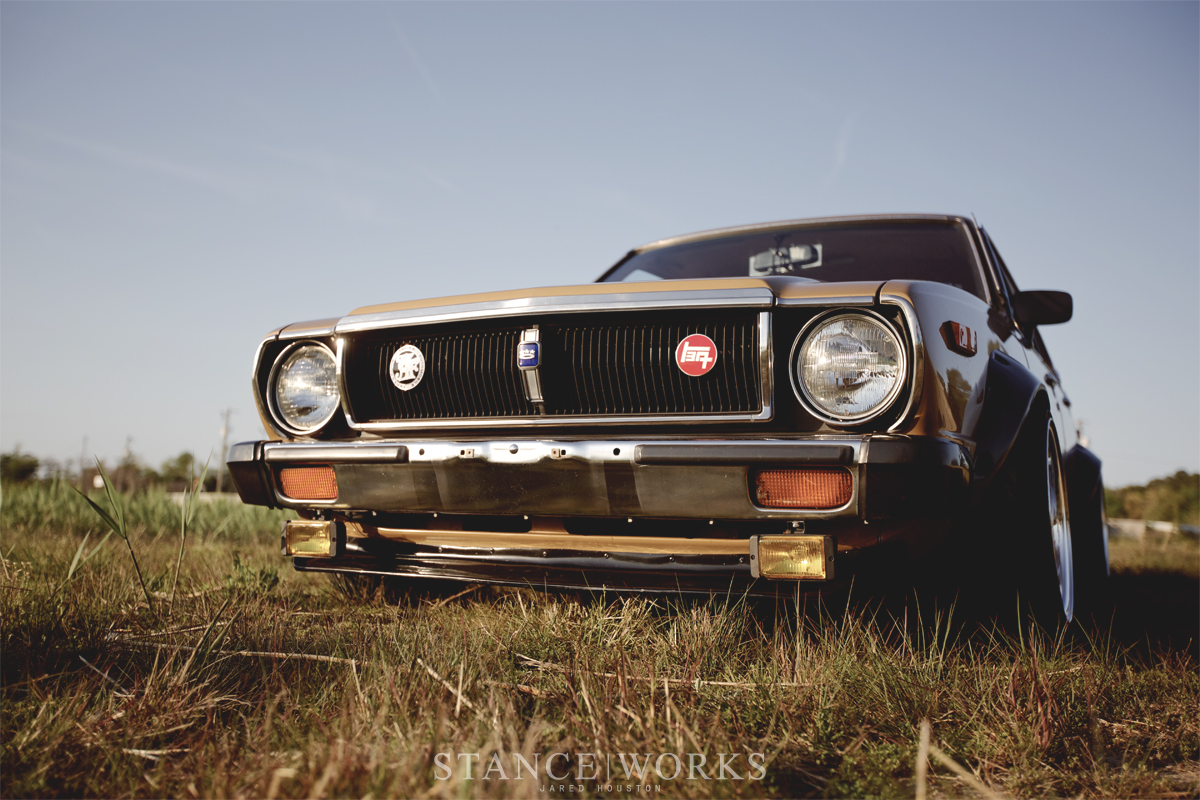 Even though Justin’s Corolla was in impressive condition compared to most coming off the east coast, he knew that some serious modification would have to happen to fulfill his desires. First up was trimming the arches to allow a more aggressive wheel to be shoved under the TE31, which was then accompanied by Datsun wide 2G flares. Subtle changes like tucking the US Spec bumpers and also fitting a TE72 TRD style chin spoiler were also made to keep a period-correct look, but with some attitude. 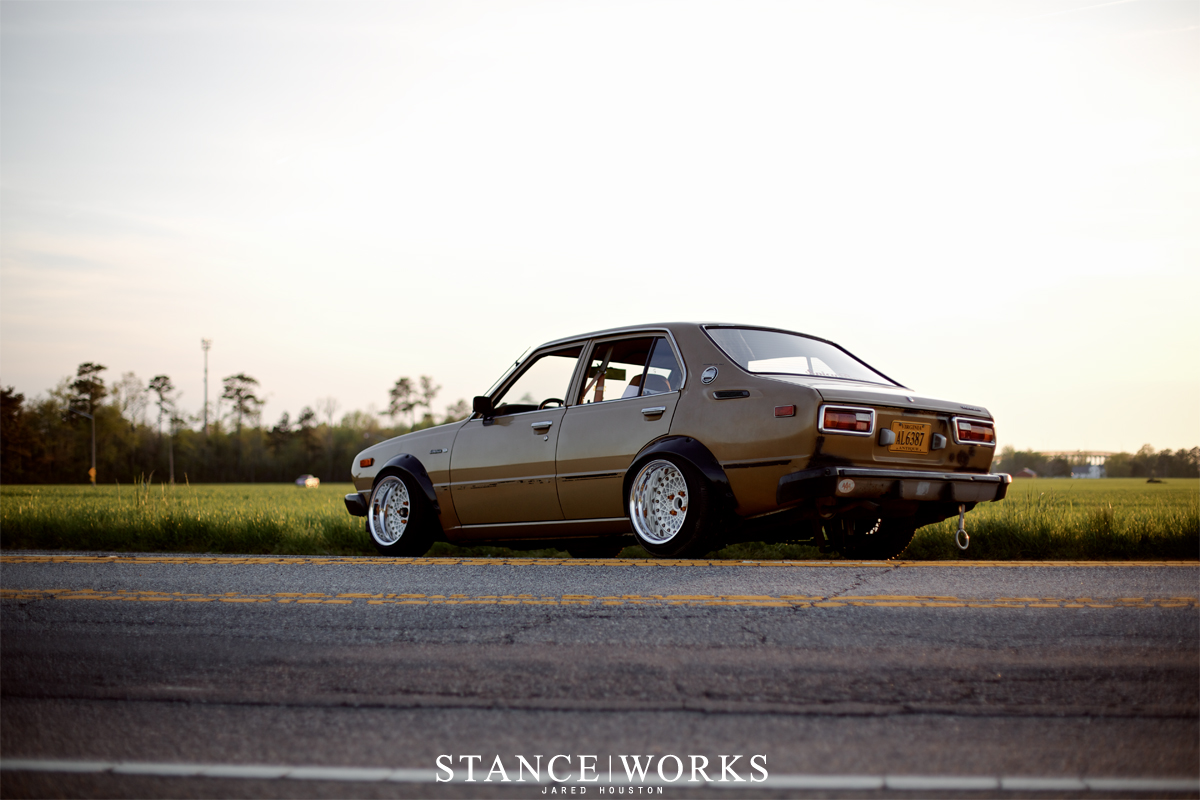 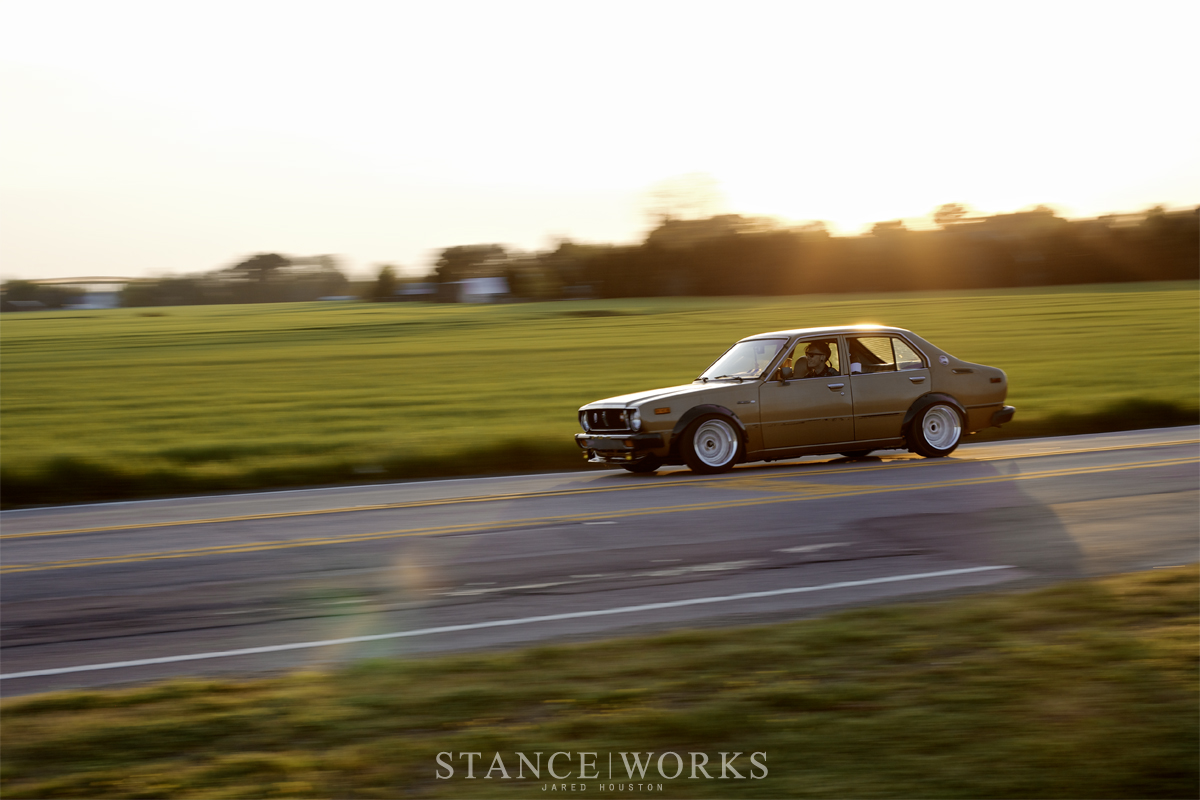 To fill the massive space that had been created by modifying the arches and adding flares, a set of Epsilon mesh wheels were rebuilt to the size of 15x8 up front and 15x10 in the rear. With the wheels built and the flares finished, Justin dialed in the offsets to -63mm in the front and -50rnm out back with the assistance of 25mm adapters. These changes in the suspension have completely changed the look and feel of the car, giving this over-looked generation of Toyota’s most successful chassis a menacing look that lingers in your mind. 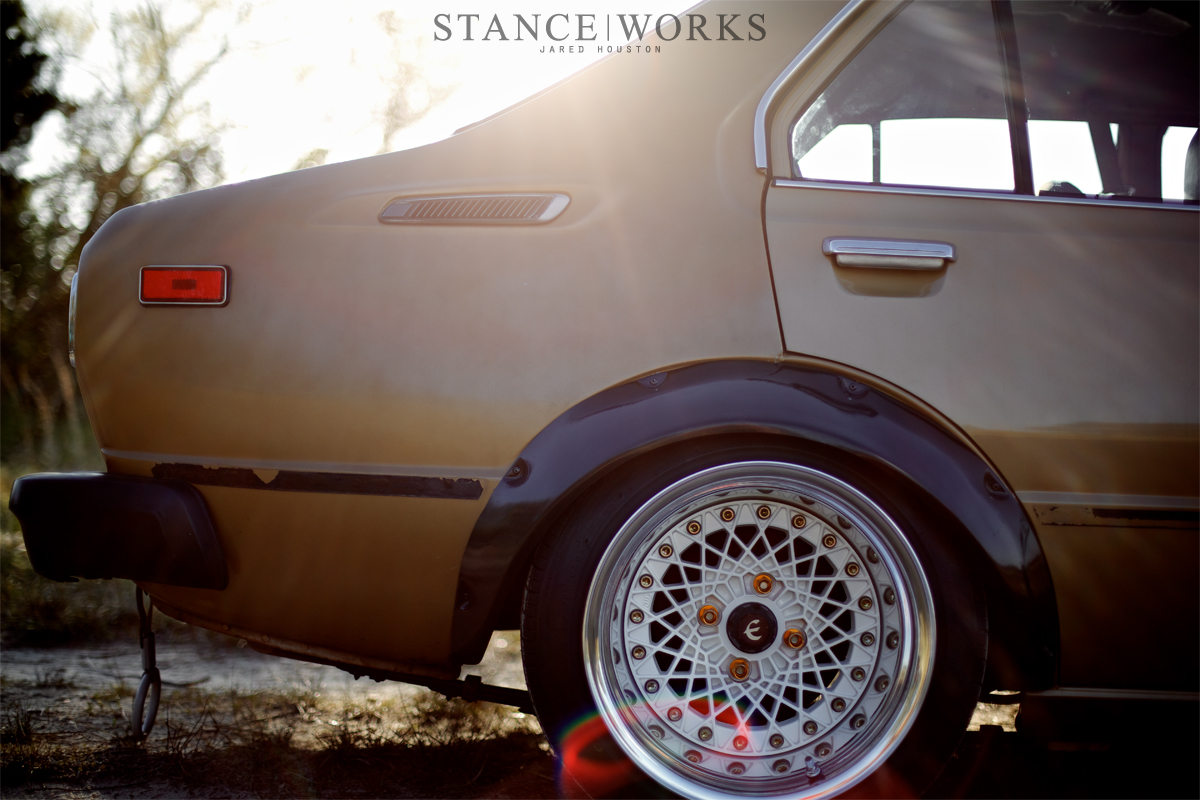 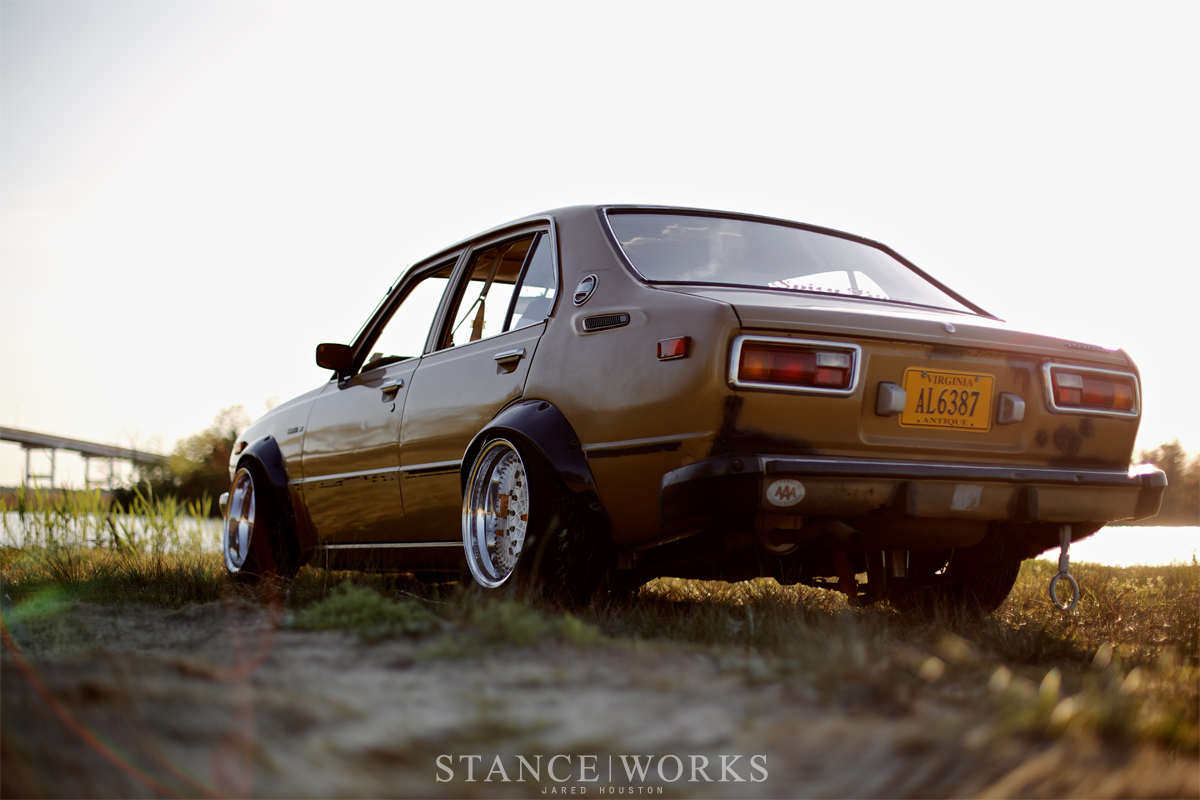 Since the vintage Corolla chassis lacks aftermarket support especially when it comes to the more in-depth modifications, Justin had to get creative with his suspension setup. Up front, he did a custom short-stroke AE86 coilover conversion using weld-on Ground Control sleeves and MR2 KYB Struts. In the rear, Justin went with Chevy S10 4" lowering blocks paired with KYB Camaro rear struts. It's a setup that took time and precision, but paid off when the chassis sat back on the pavement. 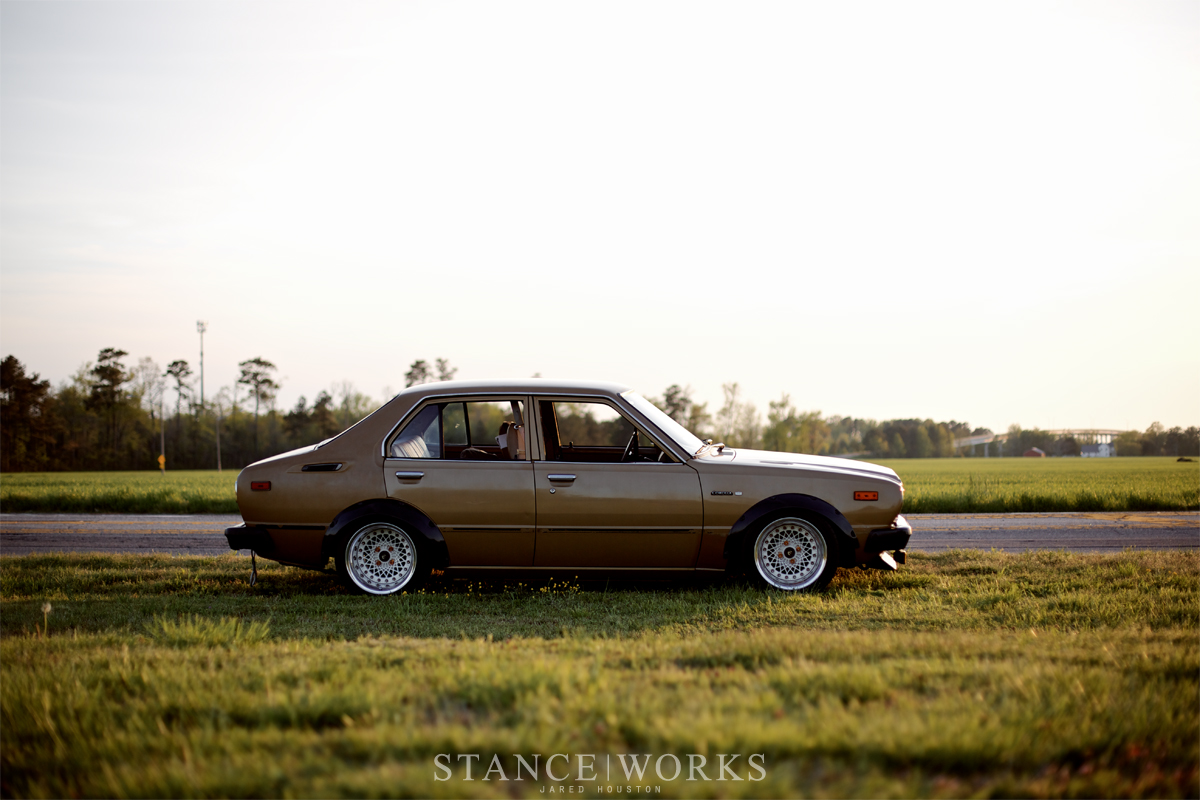 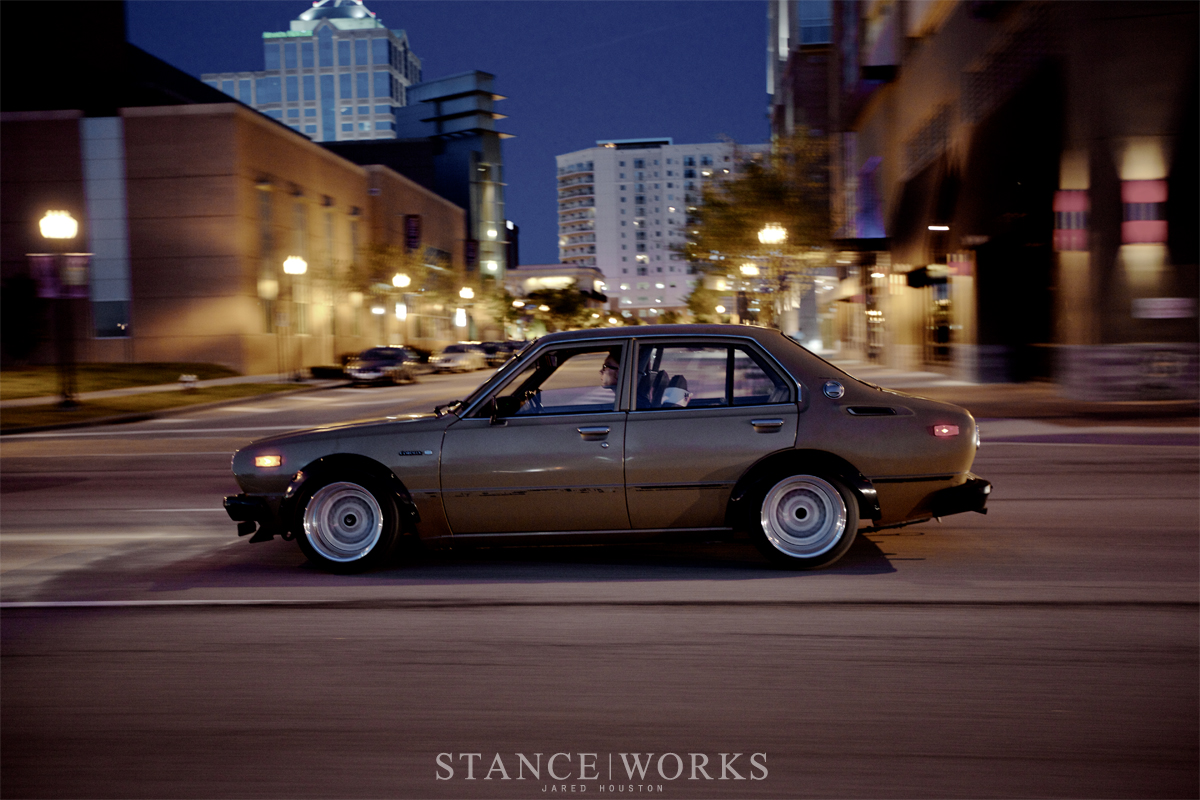 What I love about some of the builds that I come across is that the owner can see potential even when there is no aftermarket support and a mediocre following of the chassis. Its guys like Justin that can open our eyes to possibilities in chassis and modifications that we may have never considered. Justin's Corolla is proof that no matter what setbacks you may face whether it’s financial or personal, if you keep your chin up your final outcome can be one you can truly be proud of. 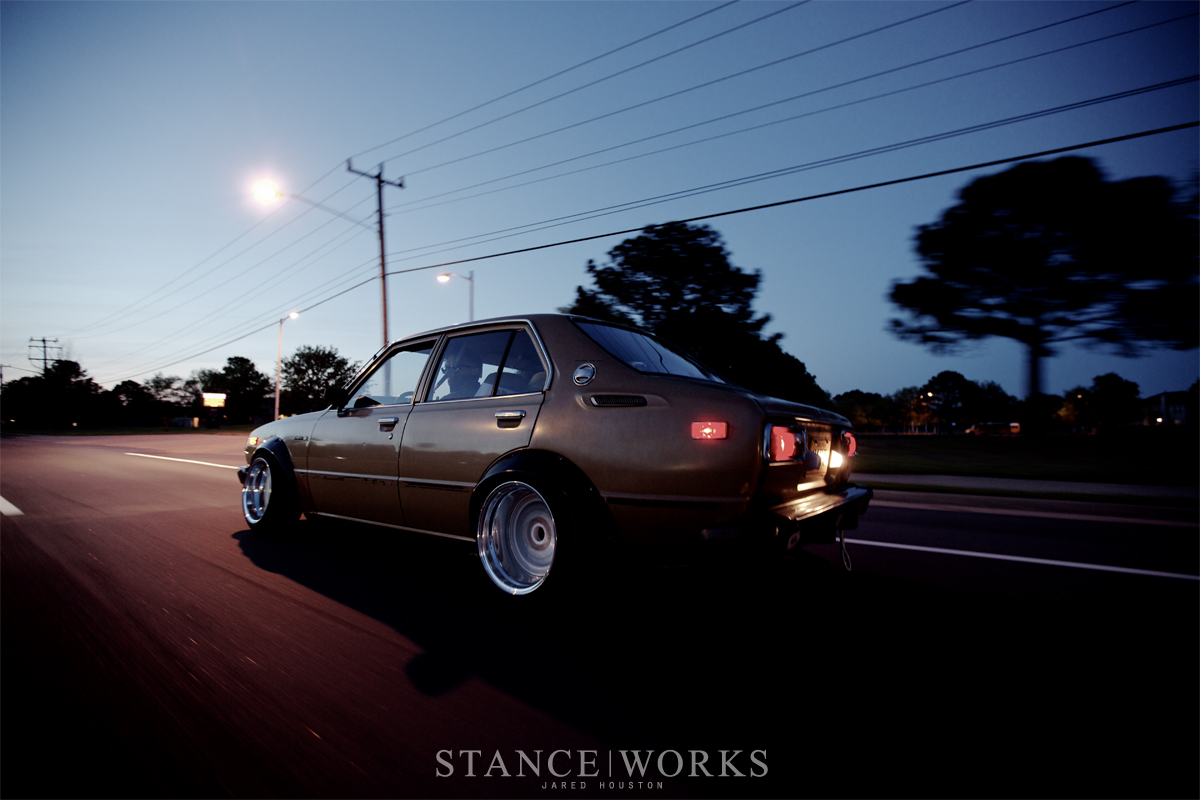 Justin would like to thank Chris Robbins, Chris Cheeks and Matt Waln for their help on the build.