It’s easy to feel removed when you skim the pages of the latest car magazine, scroll through the most recent blog posts, or watch as famous builders share their work in the viral videos that make their way around the internet. The budgets seem endless and the shop space dwarfs the suburban garage that your build has been relegated to. They seem to collect piles of parts beyond your wildest dreams and build cars with no bolt left unturned. With their high price tags and innumerable resources, the builds of this stature begin to feel unrelatable, beyond the common love for cars that we all share. Magnus Walker is one of those builders that has been placed under the spotlight for the artistry that he applies to the Porsche classics. His recent 911 STR build, fetching a six-figure sale price, was an extensive build that, while truly inspiring, may seem out of reach for many of us. With a fully built engine, carefully massaged bodywork, brand new suspension, and a flawless interior, its work goes beyond the means of the average car enthusiast. Despite his envy-inducing collection, Magnus is “just another car guy" like ourselves. He’s an enthusiast in love with Porsches and doing everything he can to experience the joy of driving the old 911s. His latest build, the 78SCHR, is an exercise in budget and restraint to illustrate that you can produce a noteworthy and enjoyable car while still staying within your means. 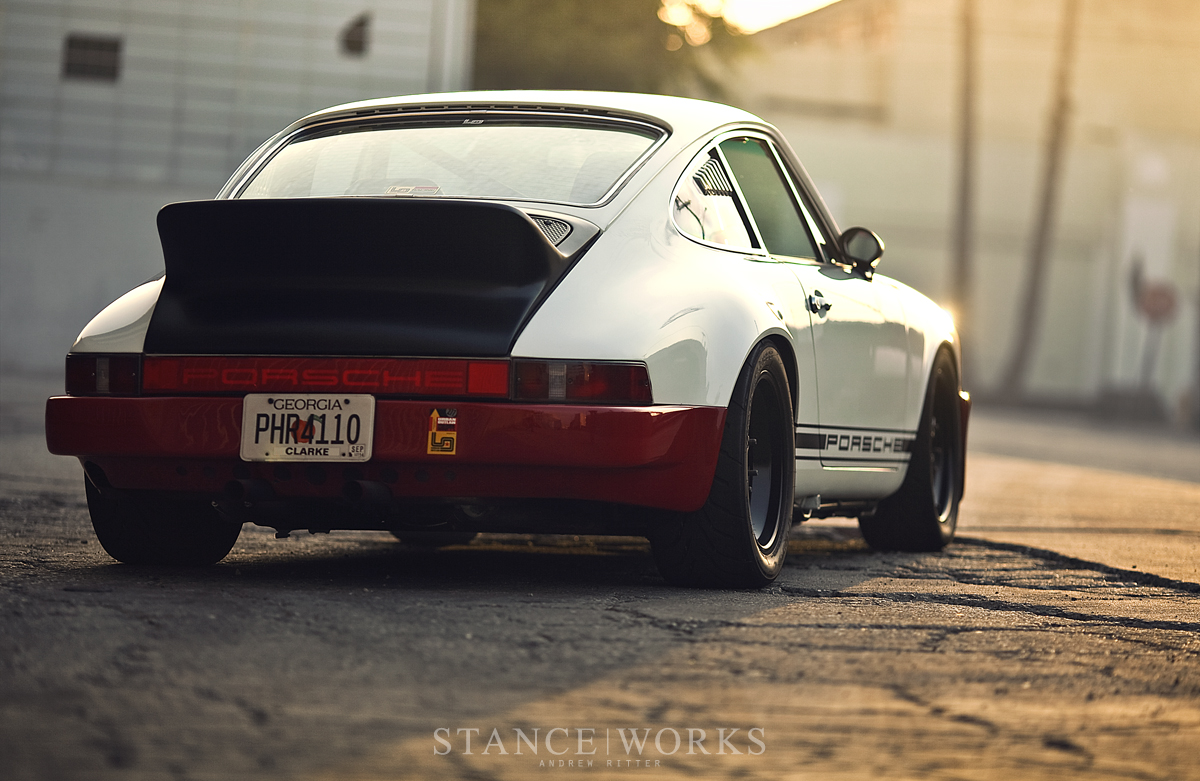 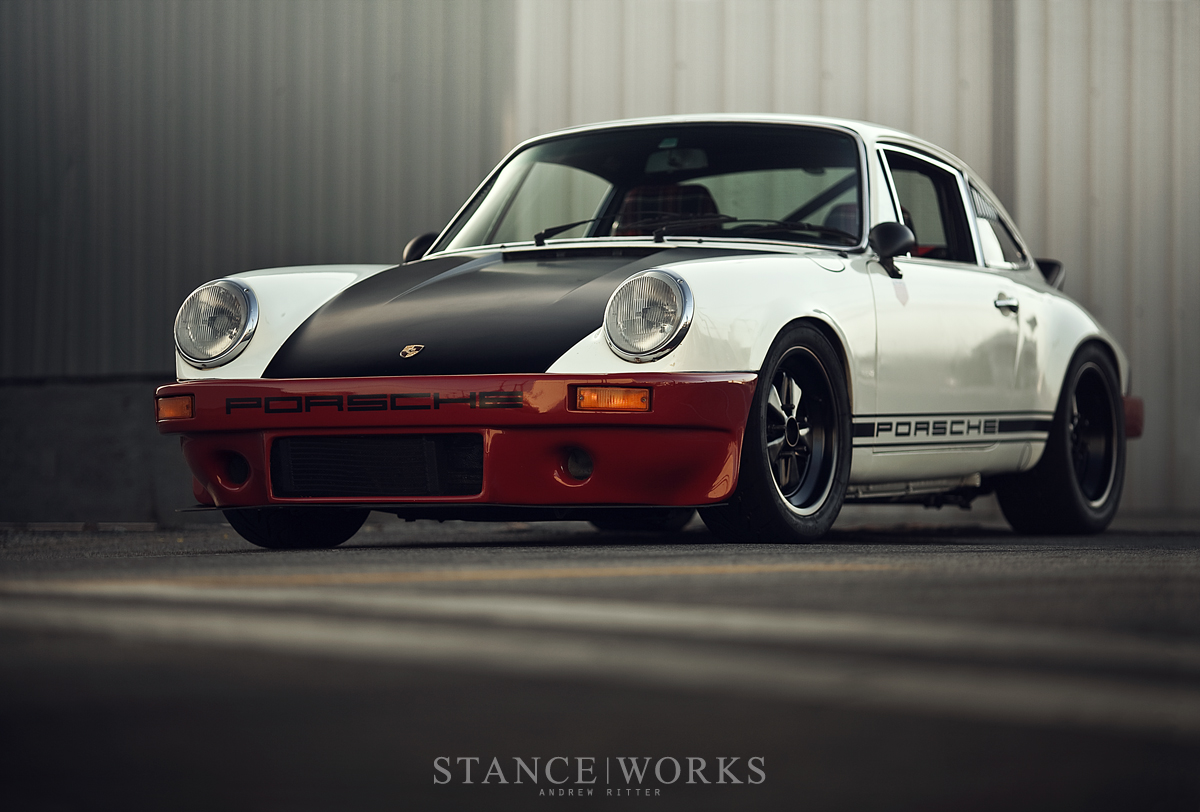 With his experience in Porsches, Magnus has a tried and true list of entry-level models for the enthusiasts who are looking to join the Porsche family. With the 924 and Boxster (986) filling out the lower budget segments, the Porsche SC is one of the best options for those looking to purchase a 911 without breaking the bank. While 911 prices continue to climb, the SC remains relatively affordable and offers a great balance of modernized design and classic character. Receiving only subtle visual changes, the 911SC retains much of the character and charm that makes its older, long hooded siblings so appealing. With its debut 15 years after the original 911 entered the market, the SC was equipped with some of the modern advancements of the 70s. Of noteworthy importance is the switch to galvanized steel that was applied to the Porsche manufacturing process in 1976. Often, when starting on a classic car project, the moment you find rust is the moment that you begin your way down the slippery slope. After a few patches on the floor boards, some poking at paint bubbles, and one or two scary surprises found hiding in the corners, your simple build now includes extensive bodywork and an expensive respray. The thought, “Oh, if I’m going to do this, I might as well do that” becomes a recurring theme, and you’ve sunken all of your time and money into the rebuild before you know it. 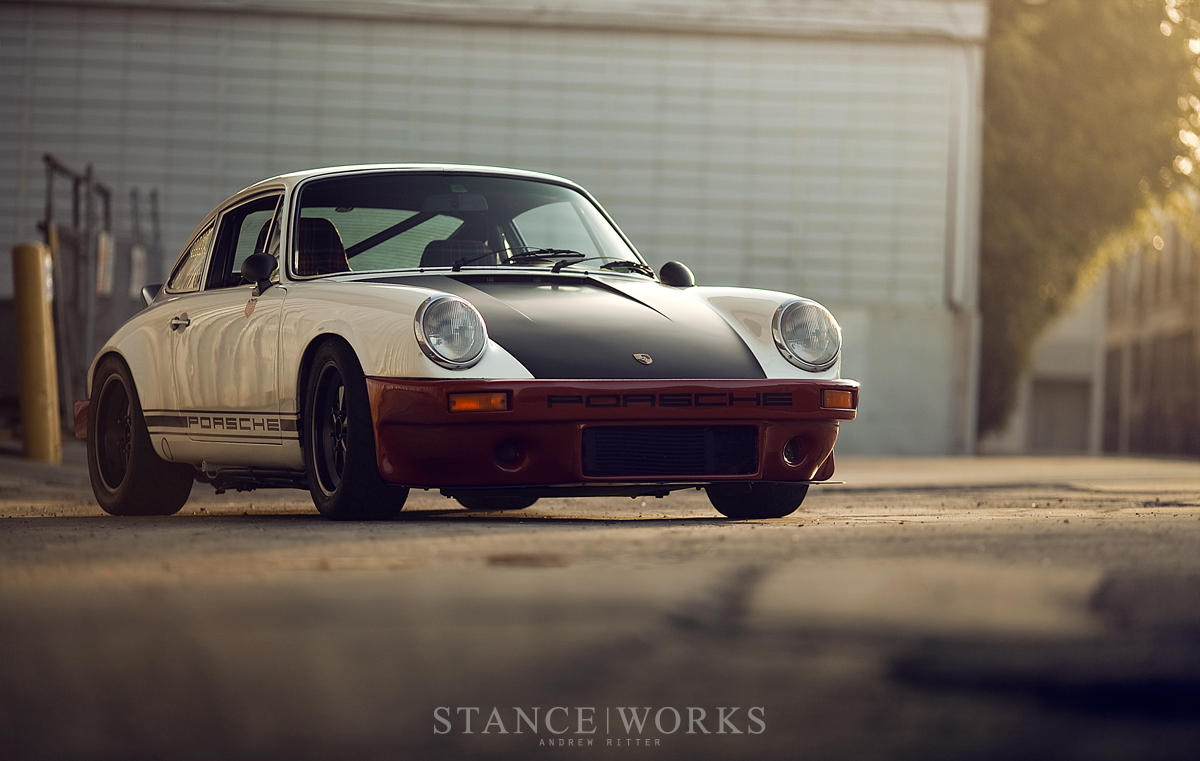 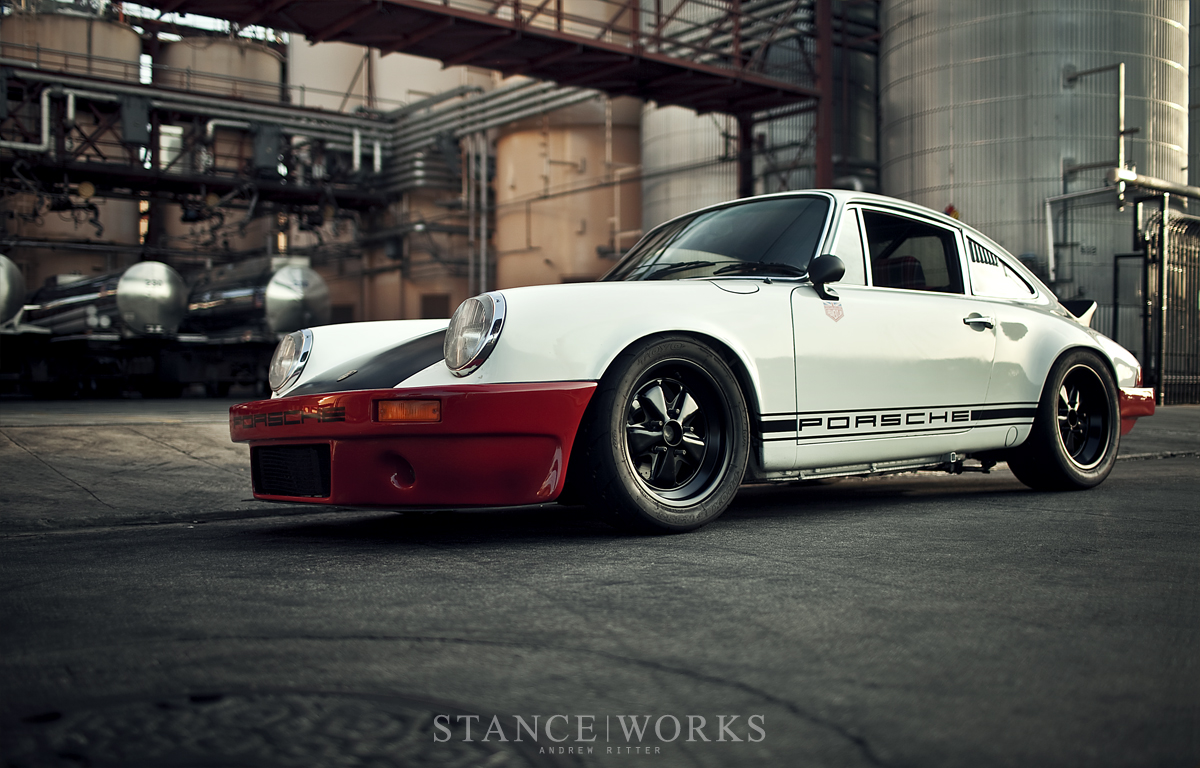 Finding the right car is easily the most important step in the build, as it sets the course for the months ahead. Hoping to avoid the slippery slope, Magnus kept an eye out for the right 911SC. At his hands, there was no doubt that the car would be tearing through the canyons in no time, so pristine condition and a low odometer weren’t part of the checklist.  The rock chips and wear that come from a long life of driving and track abuse often deter the standard Porsche buyer seeking out a clean car for their weekend jaunts, but for Magnus, the old track cars make the perfect canvas for his work. After some searching, his car collection in LA grew as the white 1978 Porsche 911SC drove into the compound under its own power. With its engine already running strong and 20 years of track use under its belt, the car was well on its way to being Magnus’s next corner carver. 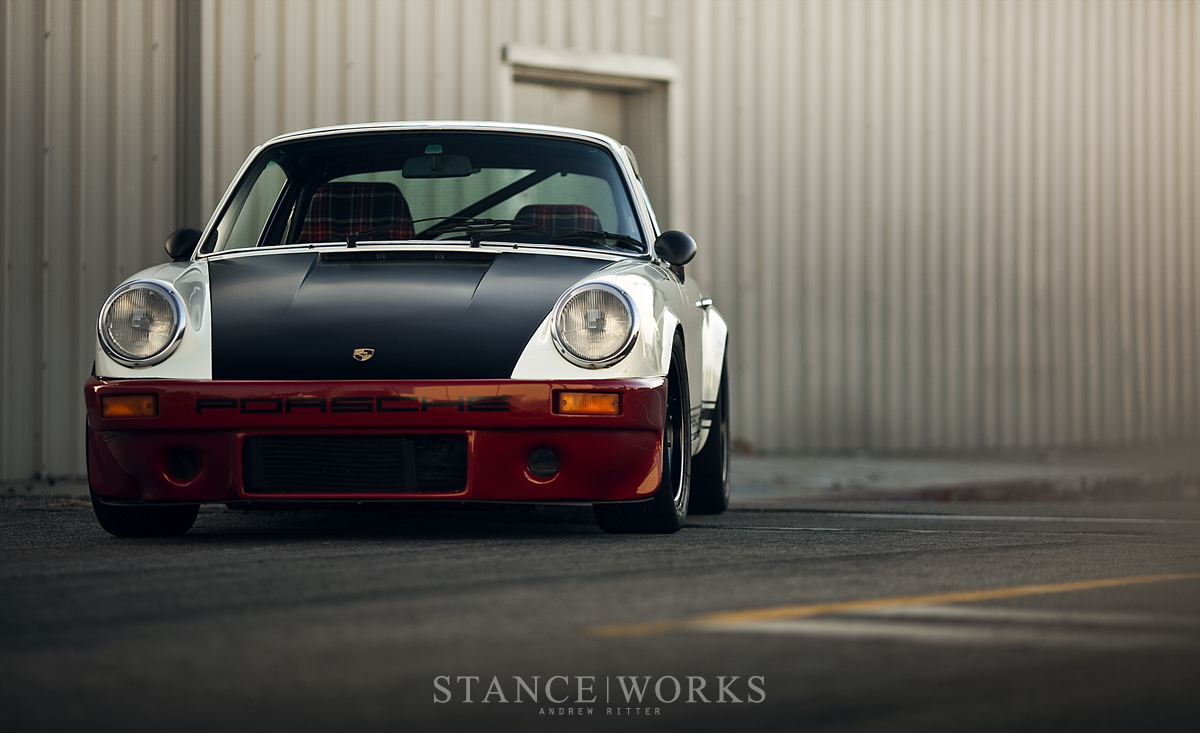 Its long history of track duty meant that the car came equipped with many of the standard parts that would come at the front of every to-do list. It was just up to Magnus to begin adding his own signature touches. The suspension had already received attention to ensure that it could handle the HPDEs that it participated in, but the right didn’t quite meet his style requirements, so the torsion bars were turned and the arches were brought down over the tires. A set of 16x7 Fuchs rolled in on all 4 corners of the car, but the rears were quickly replaced by a spare set of 16x8 Fuchs that were taking up space in Magnus’s shop. After receiving a uniform black powdercoat, the wheels were wrapped in 225/45s and 245/45s respectively. The 16-inch diameter is a divergence from the usual 15s that accompany many of the Urban Outlaw builds, but it seems fitting on the short hood model, and, matched with the new staggered widths, it makes for a very aggressive stance. 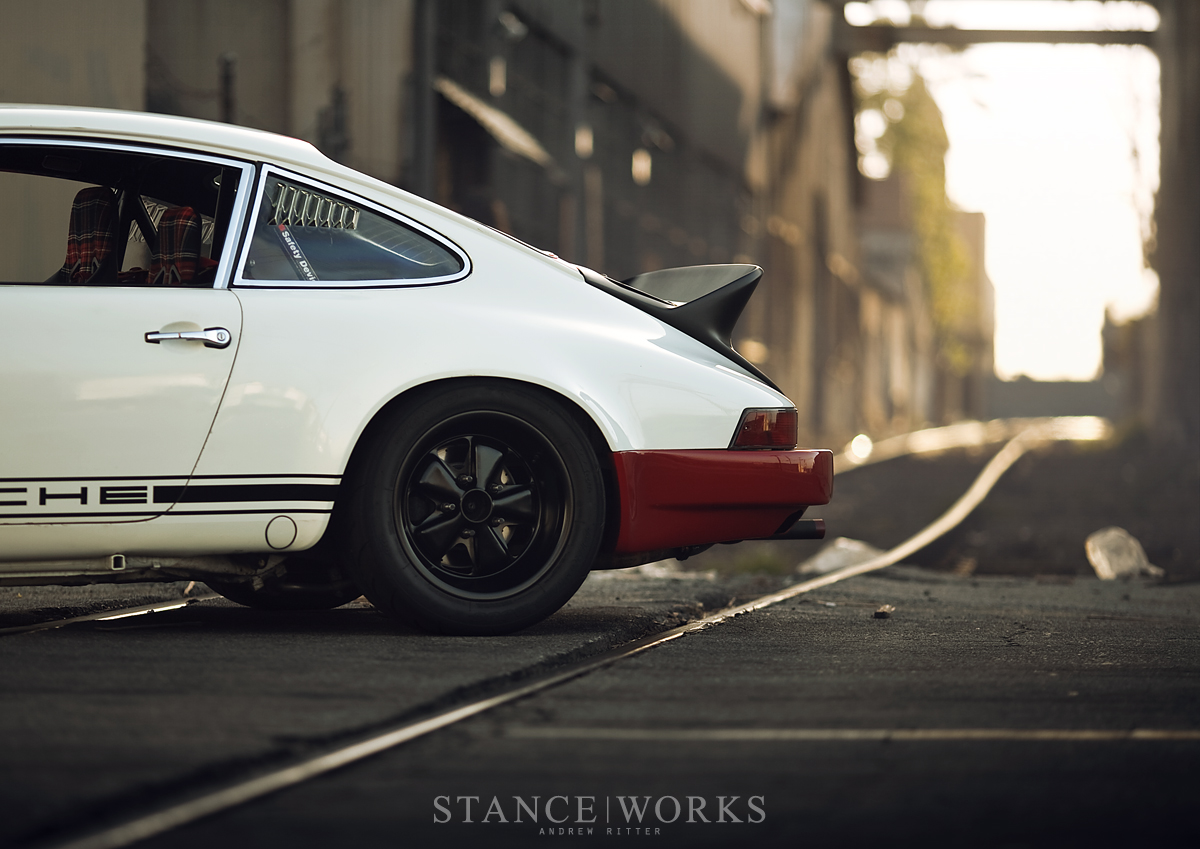 When the SC was released, Porsche did a great job handling the impact bumper dilemma that plagued so many car designs of the era, but they still left a bit to be desired. The previous owner had replaced the OEM accordions with the IROC bumpers, modeled after the 1974 Porsches that competed in the International Race of Champions. To continue with the IROC styling, a large "whale tail" spoiler took over the rear decklid, but it wasn’t destined for the newest incarnation. Instead, Magnus, felt that now was the time to incorporate the ducktail spoiler that he had long considered but always avoided on the earlier models. The newer lines of the SC flow well with the decklid and the addition of the mesh grill further adds to the sportiness of the 78SCHR build. Before heading off to the paint booth, the rear bumper was modified to accept the twin pipe muffler that he had in store for the car, and the trademark drilled holes that often adorn the door handles of his builds were incorporated across the rear valence, giving a lightweight motorsport look. Magnus cut down a sheet of ABS plastic to create a simple, yet effective splitter to add a strong line to the bottom of the IROC front bumper, continuing in his simple budget-minded build practices for the 78SCHR. 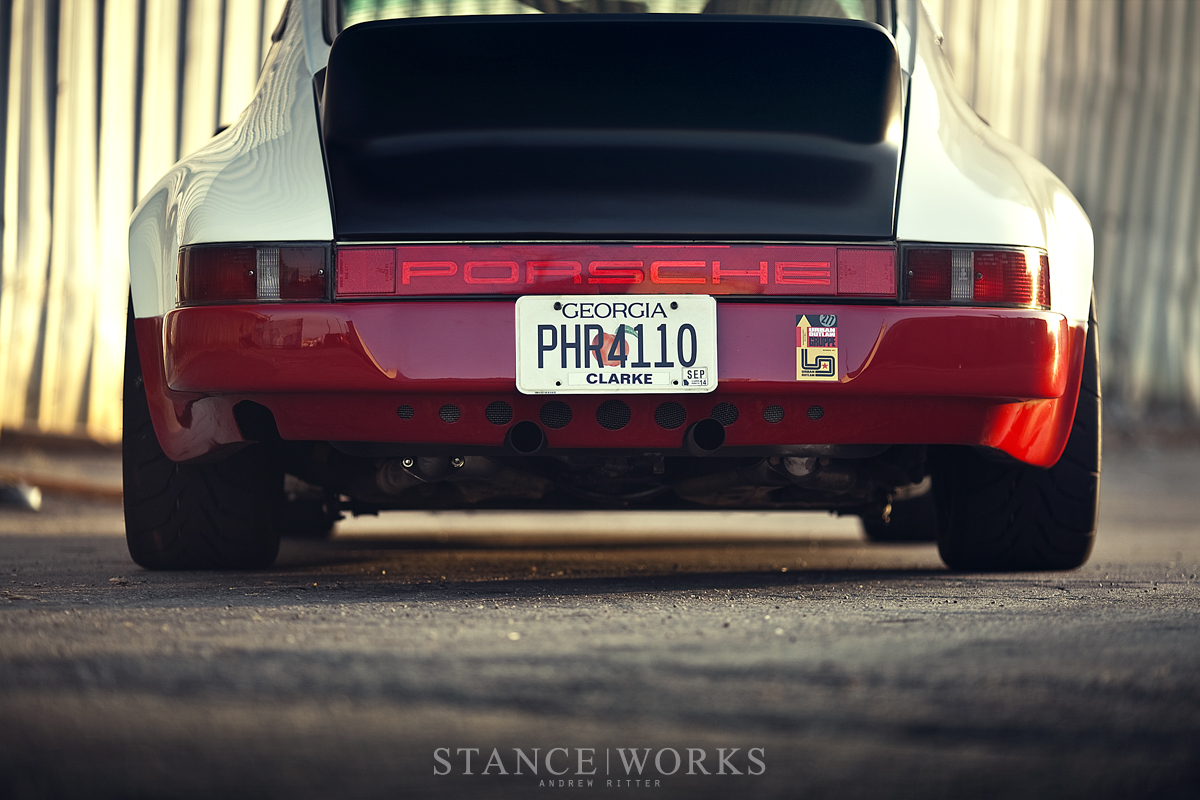 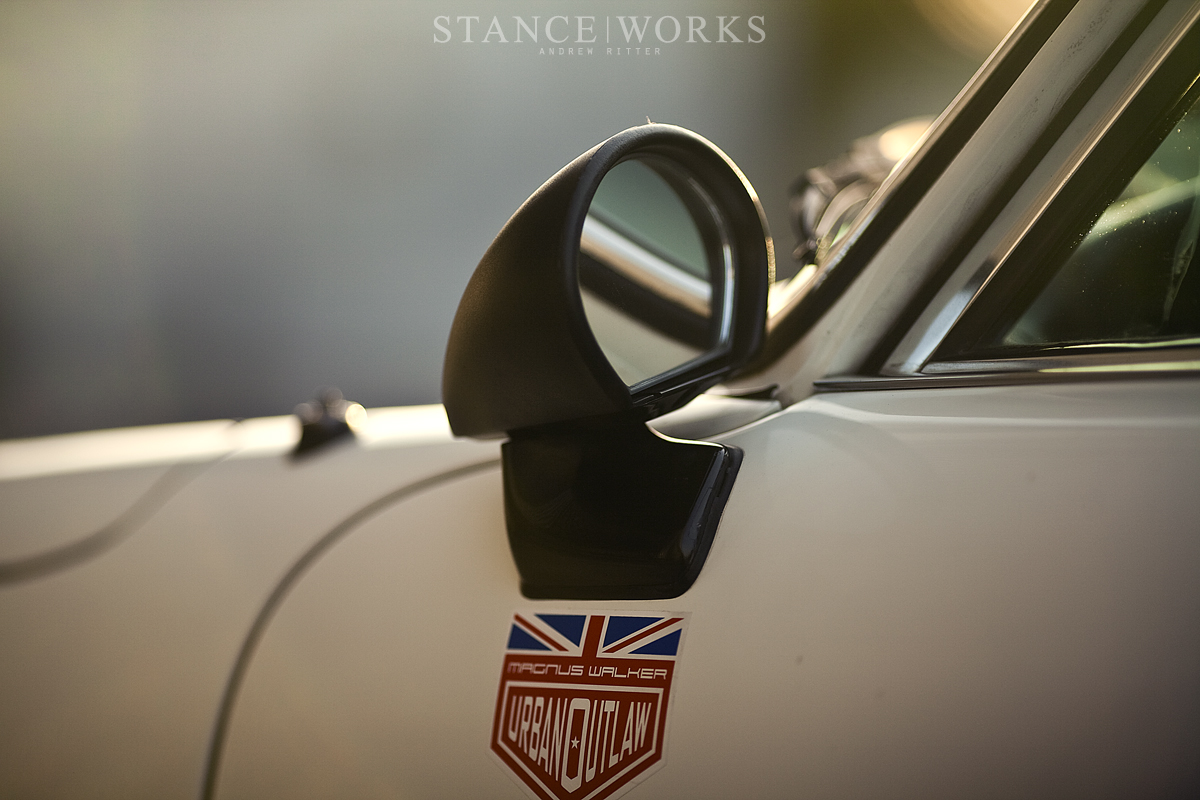 Once the exterior parts were prepared, they were sent off to paint to add his signature style by means of a 3 color scheme. The introduction of the red and black to the color palette give off livery vibes and add an instant character to the build. The simple act of painting the bumpers, hood, and rear decklid transform an otherwise bland white car into one that screams "vintage motorsport." Some for-sale ad hunting on Pelican Parts turned up a set of black Vitaloni Sebring mirrors which tuck against the body; a far more aerodynamic and stylish solution to the winged mirrors that came from the factory.  To finish off the look and carry the black color around the perimeter, tying in the black wheels with the rest of the scheme, is the beautiful typography of the Porsche logo in the form of side stripes and front bumper strip. With the race numbers left off of the 78SCHR, it relies on many of the other styling cues to still exude the race styling that is found across his collection. The result is a beautiful and clean exterior that pops against any backdrop, whether it be his urban territory or the rocky cliffs of the LA Canyons. 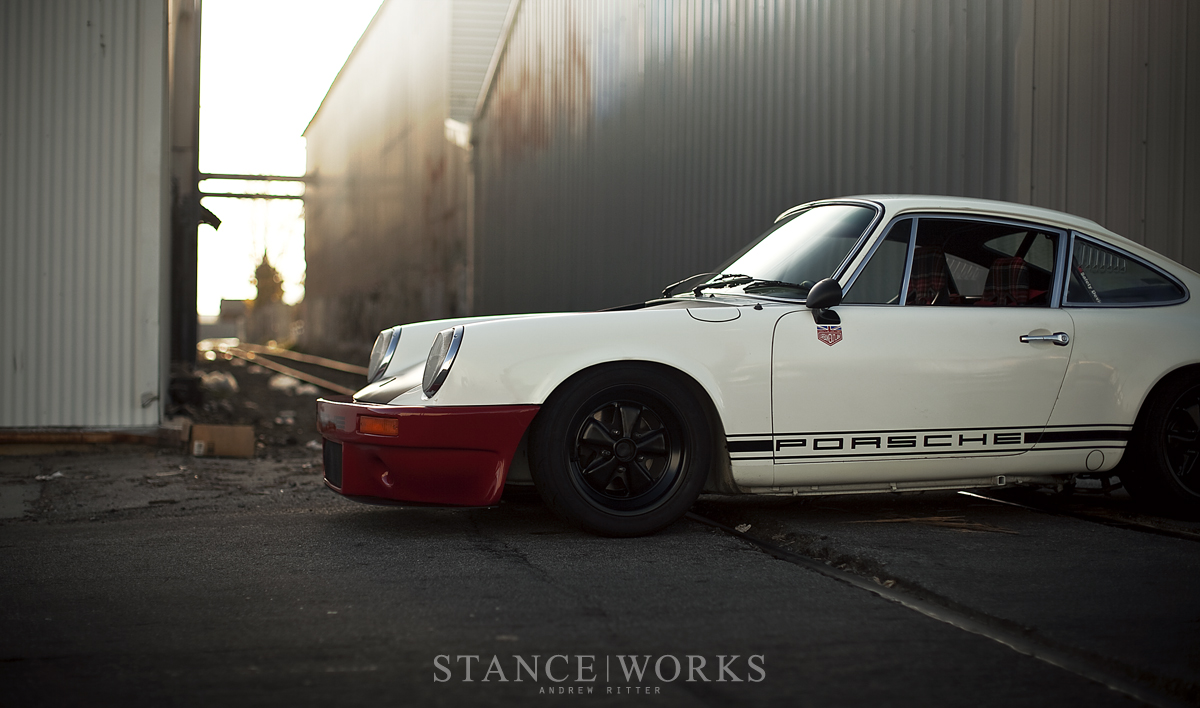 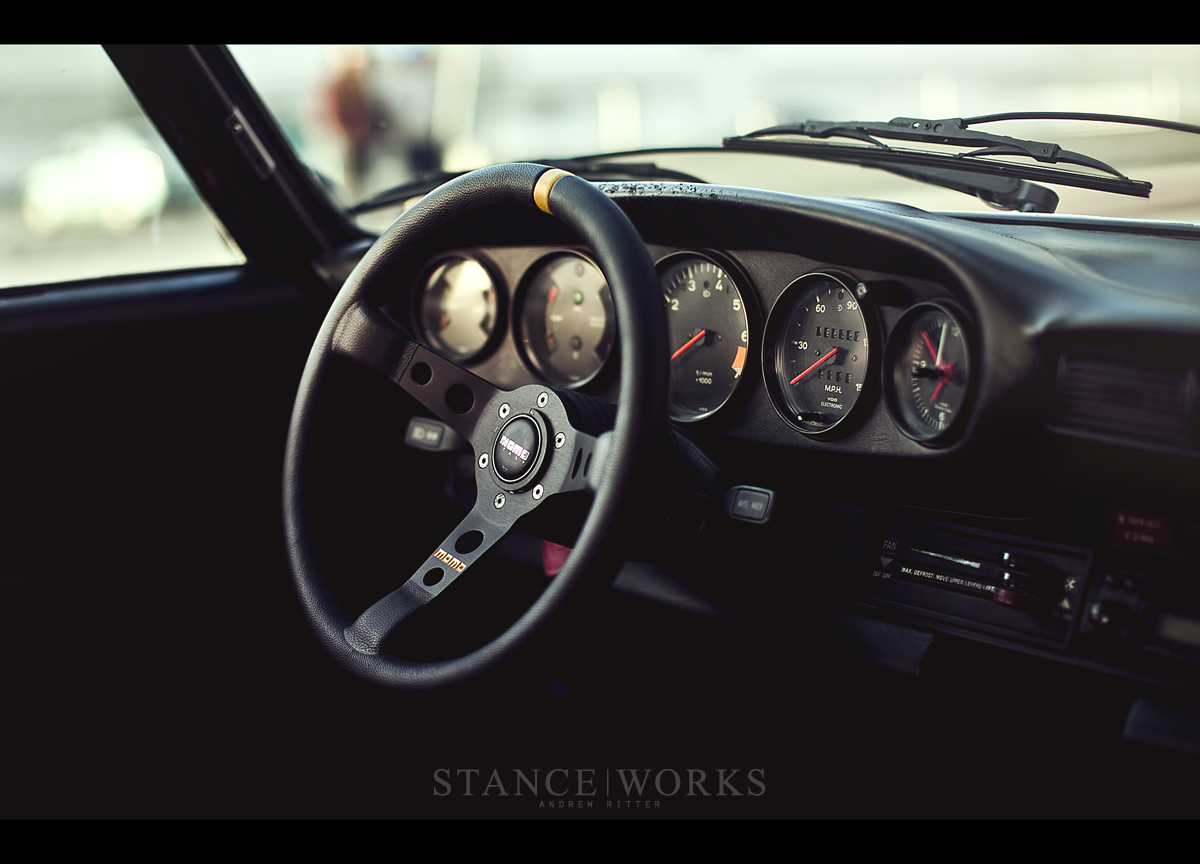 As the track car returned to street duty, the interior had to undergo more changes than the simple modifications found on the exterior. The interior of the ex-race car had been stripped bare, pushing aside comfort in favor of weight reduction, leaving just a driver’s seat and full cage. To remain safe during standard usage, the front half of the cage was removed, leaving the main hoop and diagonals. While the carpet replacement had to be bought new, Magnus turned to his spare parts shelves and classified ads for many of the interior touches. A momo steering wheel was brought back out of retirement, and a used set of seats were sourced for a meager $150. As one can imagine, deals such as this are only meant for those who are willing to put in the hard work to restore their original value, but that’s where the magic lies in a "budget build." Magnus searched through his spare bolts of fabric and found the perfect tartan pattern for his new color scheme. Recalling the expertise learned through years in the fashion world, he recovered the seats and added tartan highlights to the pulls on the RS door cards. With a little bit of elbow grease, some recycling of spare parts, and some diligent parts searching, a stripped interior was transformed back to a complete and stylish sports interior. 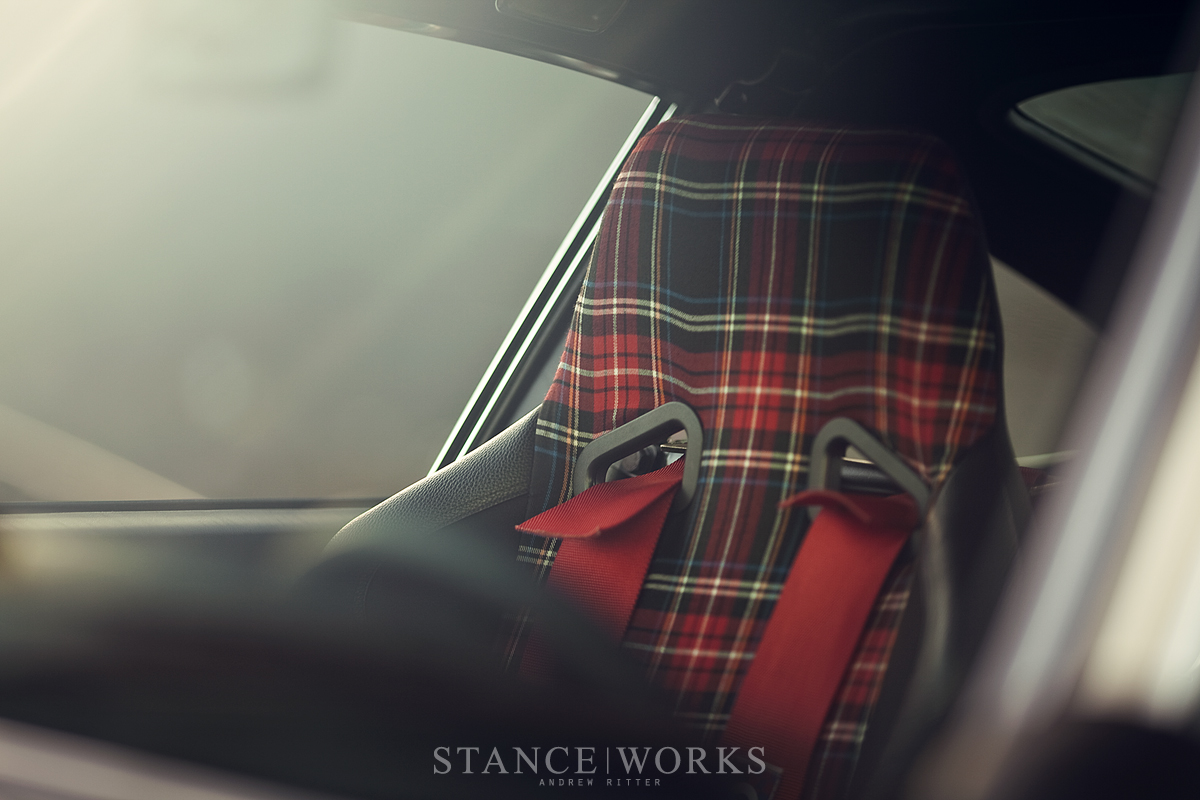 The engine remains stock, but the 3.0L displacement offers more torque and power in the lower power band. A stark difference from the high strung engine of his #277 car that just begs to be driven in the higher RPMs, the 911SC is a blast to drive on the street. Even with its ‘semi-built’ nature, the 78SCHR offers up a lot of style and fun and, allowing Magnus to enjoy yet another facet of the Porsche driving experience.  In just 8 short weeks and on a limited budget, Magnus was able to assemble a 911SC that holds its own amongst his impressive collection. With some basic alterations, the SC has been given its own signature Urban Outlaw style, acting almost as a natural evolution to the #277 car and the 67S 911. 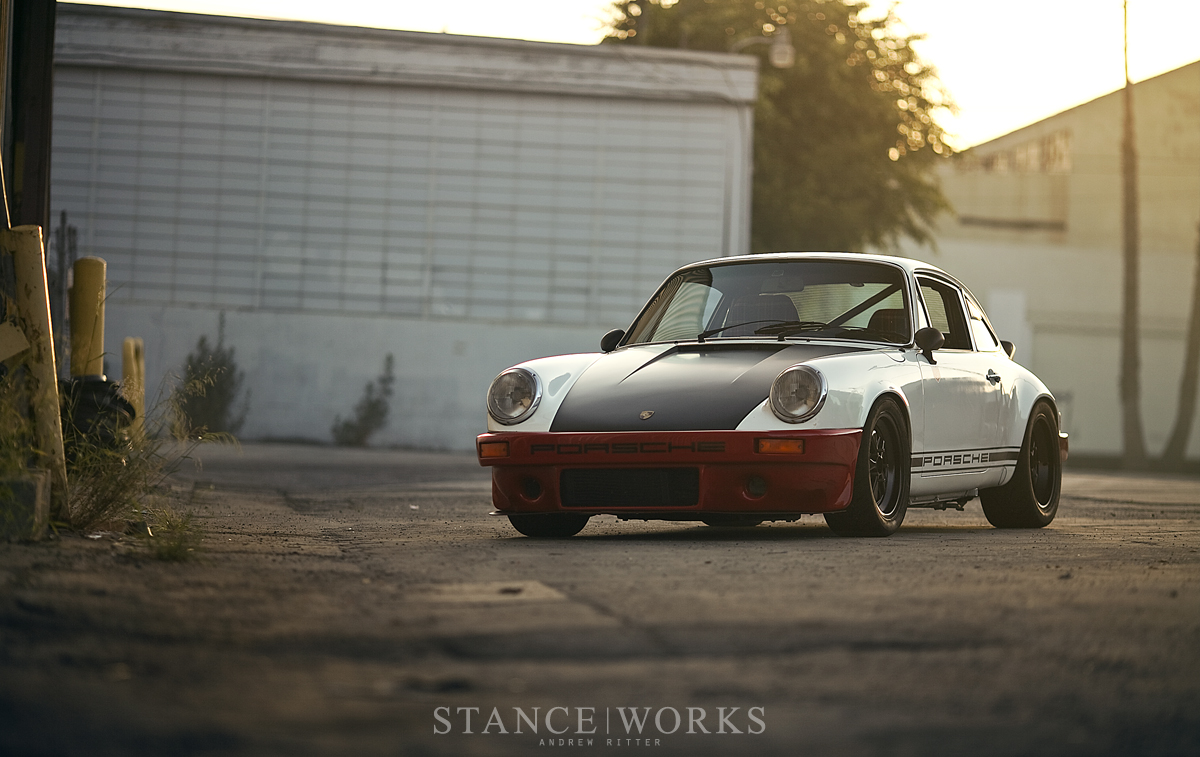 While many of us may still have to save up to afford a budget Porsche build and we haven’t quite gathered the parts collection that Magnus has assembled over the years, the 78SCHR is a prime example of what you can do with a little hard work and ingenuity. Often times, people worry too much about achieving perfection and it hinders the enjoyment of their builds. While it has wear and tear from years of abuse, and second-hand parts are present throughout the build, the result is still a car that will capture attention everywhere it goes while serving up a true driving machine when it hits the curvy mountain roads. One doesn’t have to dive in over their heads on a high-budget build to develop a car that brings them joy. Sometimes the best course of action is to show a bit of restraint and work within your means to build a car that you can get out there and enjoy. 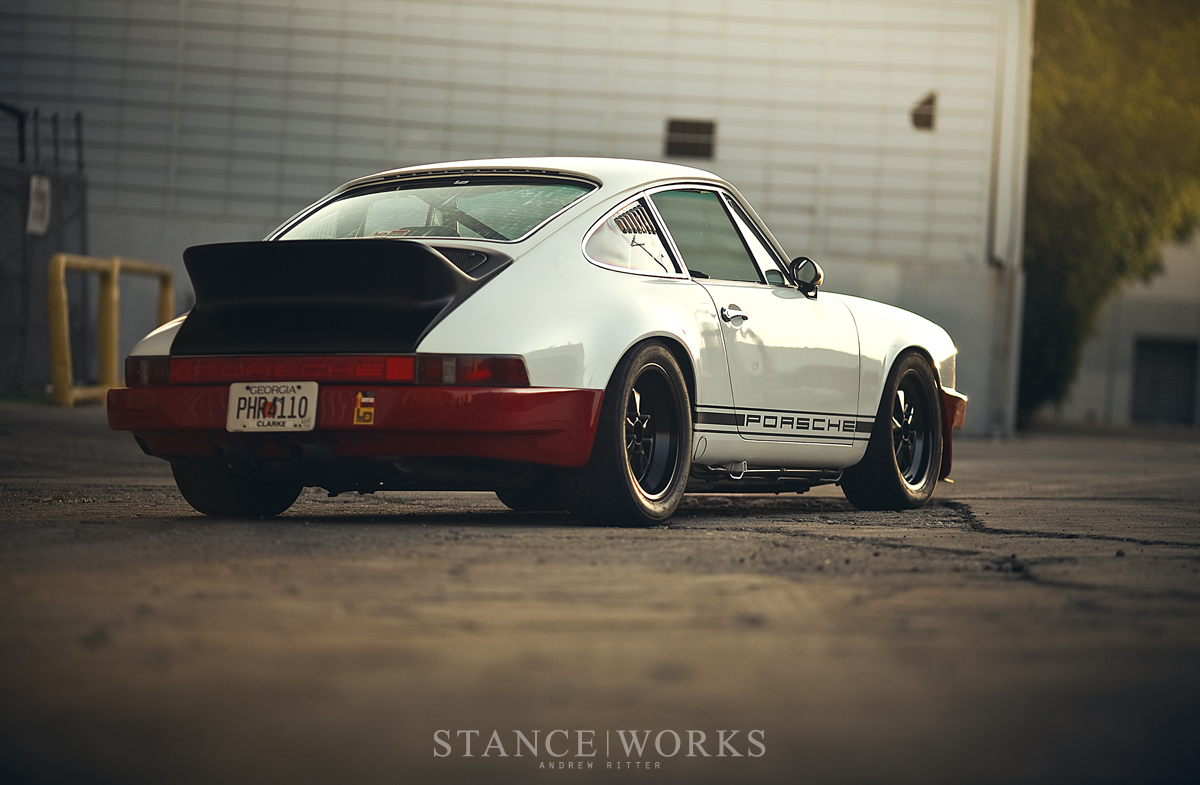