The automotive industry is always evolving. In this day and age, car design is always a battle between manufacturers to outdo each other. I know I’m not alone in the thoughts that there are many similarities between many makes and models; it takes out of the box thinking to have a car actually make you take a step back and say “wow”. When you look back through automotive history there are several iconic cars that are instantly recognisable, and the GT40 is indisputibly one of them. 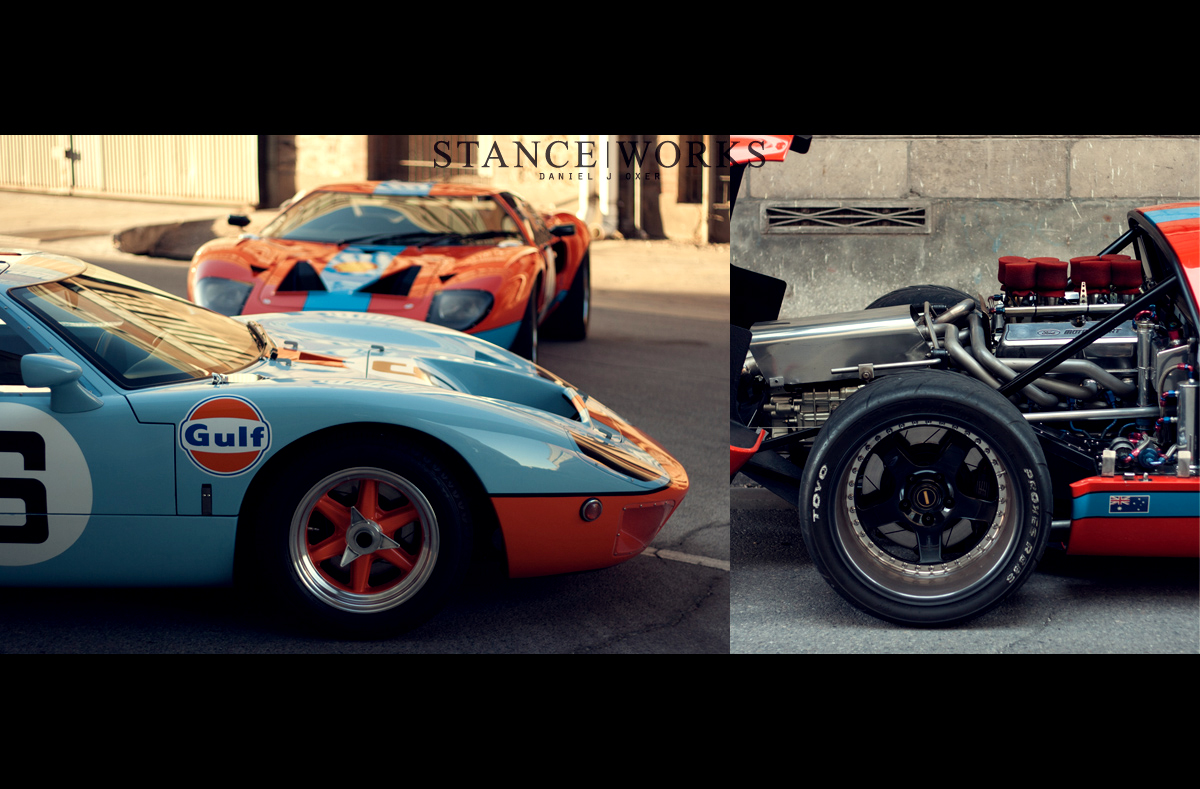 Last December, a group of the StanceWorks Australia family travelled to Adelaide in South Australia to have a weekend away and celebrate the end of another year passed. Sebastien Peek hosted us for the weekend, and gave us a warm reception: drinking, eating, celebrating fellow member Foff’s birthday, and the like. 30 people chanting “happy birthday” on the streets of Adelaide obviously doesn’t happen often, as surrounding restaurants and bars came to a standstill to spectate the commotion. One of the events we attended was the annual JAF’s cruise where thousands of cars meet at one car park and cruise to another throughout the night. At the first meet point we walked around in awe of the pure magnitude of the event. It’s a rare occurrence to see thousands of modified cars in one place in Australia; one cannot help but be in awe of the variety. One of the clear standouts of the night was a MK1 GT40. Wearing the traditional gulf livery, the crowd around the car was at least 4 people deep at any given time. Unable to find the owner in the crowd of thousands, we continued on. Cars started the journey to the next meet point on the cruise, and we decided to make a quick stop to gather more clothing as the sun had set. 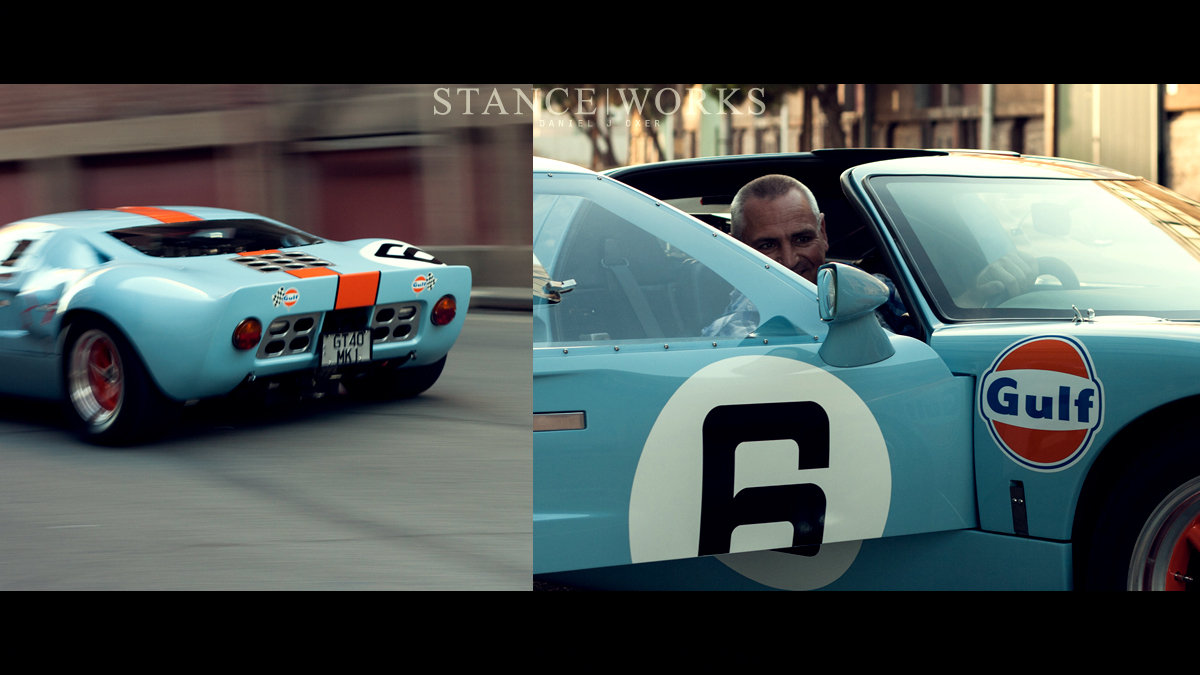 While driving back to Seb’s place to regroup, we drove past a gelato shop literally around the corner, and none other than the number 6 gulf GT40 was sitting outside. Zach Wirth, a fellow photographer, along with myself, decided to take the opportunity, for the regret of not stopping would have eaten away at me all weekend. We found the owner enjoying a gelato with his family. Dino Pietrobon was genuinely happy to meet us, happy to see the excitement in our eyes and the passion that his car draws. After a brief chat and an exchange of numbers, Dino was happy to meet us the following day to take some photos of the car. Content with meeting Dino, my night was already made. The final location was nothing short of the first, thousands of cars, with thousands of people. As I walked around I could not believe what I had come across; a second GT40. As previously, the crowd was 4 people deep at all times; the attention the iconic design draws is inspiring. From children to old men, these cars draw feelings and emotions that we all grew up with. You’d be hard pressed to find someone with a passion for anything automotive to not instantly recognise these cars. 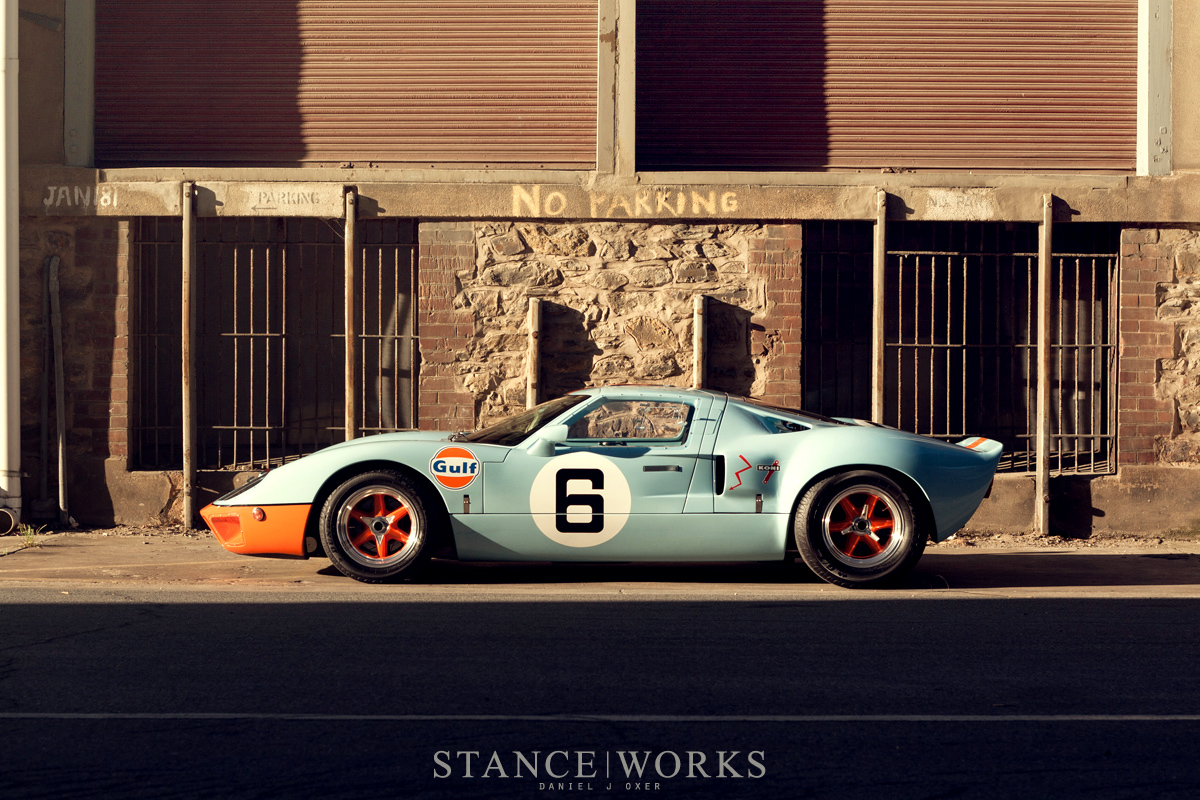 I stood around the car for at least half an hour, trying to weed out who the owner could have been. The chance of possibly shooting two GT40’s together was stimulating. Just as they were about to leave, I had found them. Harry Papageorge and his wife Angela were overwhelmed by the response of the crowd, but gave me 5 minutes of their time to exchange numbers with the intent of a photo shoot. Amazingly when I explained it was the second GT40 I had seen that night, Harry instantly replied “I just got off the phone to Dino!” The following day we met, and were able to talk about the cars, their history and converse without interruption to capture what you see here. 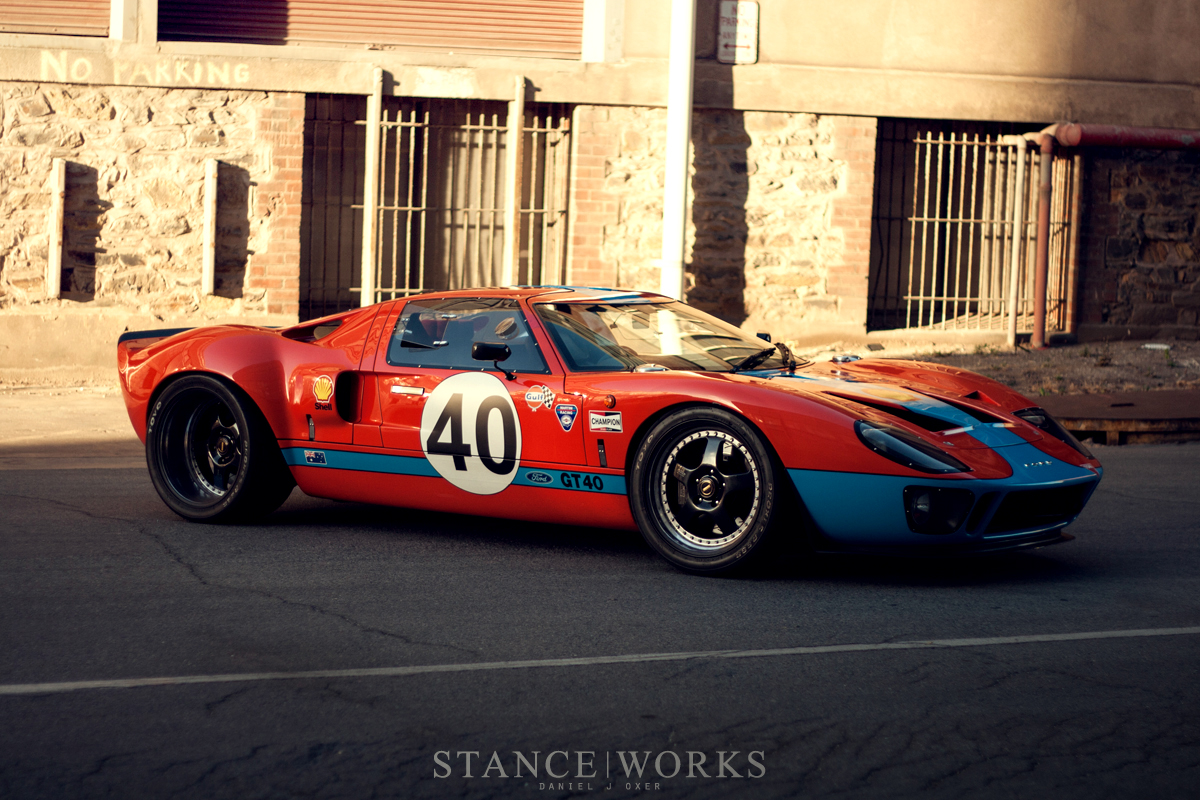 Harry and wife Angela were looking for a car they would both enjoy, and after laying eyes on the car you see before you, they fell in love with it. The car was built by Peter Ransom of DRB Sports cars in Queensland, and in 2011 Harry bought it. The car was originally Peter’s daily driver: to showcase the company’s ability to build arguably the best replicas in the world. Featuring a forged and built engine, and producing 600hp in a car that has a curb weight of 980kg, it’s not for the faint of heart. Every chance they get, Harry and Angela take the car to the track, having raced it locally at Mallala circuit, and knowing the car has raced at tracks such as Bathurst previously, the future seems exciting. To get it to where it is today, being road registered amongst some of the strictest rules in the world, the car had to be pulled down and rebuilt from the ground up. Harry opted for the guys at Paul Pavlou motors headed by Steve Pavlou to assist in the painstaking process, but after the long process, it was definitely worth it. 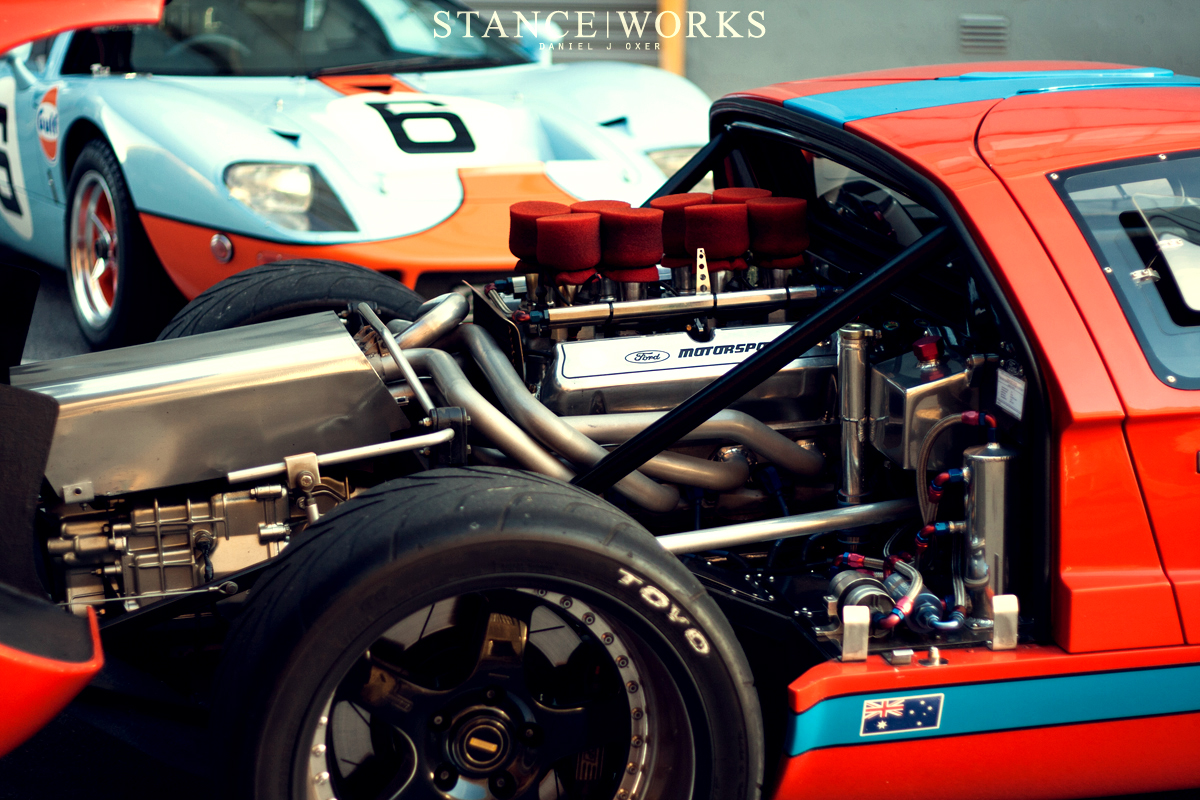 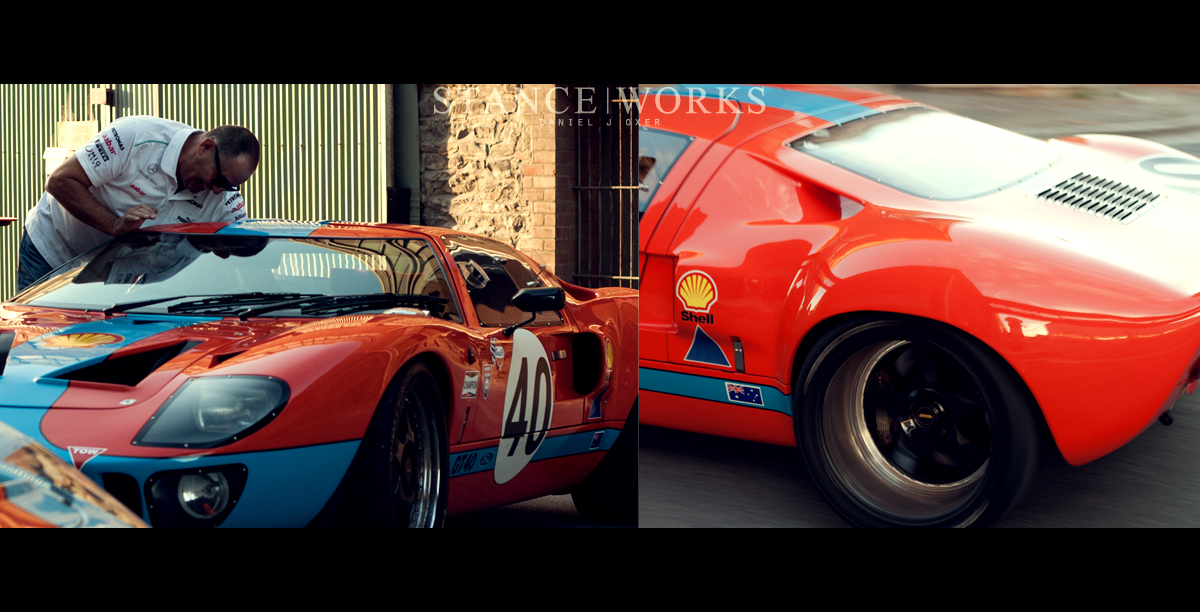 Dino’s car has a little bit more history behind it: Originally, a man by the name of Cary Gressinger, who had a background in building replica AC Cobras, decided that he wanted to build a GT40. He decided he wanted to build an exact replica of the #1075 MK1. To do this, he spent 6 months contacting the man who actually owns the original, and after much back and forth, was allowed access to go to Arizona to photograph, measure, and sit in the one and only car. Having heard rumours of the quality Peter Ransom, whom had built the other car before you, and his team were producing in Australia, he travelled to Queensland to see it in person and discuss the options that would be available. Cary became the US rep for DRB Sports cars, and ordered two cars to bring back to the US. The detail he put into the car speaks for itself. From being on a two year waiting list for a set of Gurney/Westlake valve covers, searching for the cibie headlights and driving lamps from Argentina, to 15” BRM wheels. Even the power output and gear ratios match the original car. 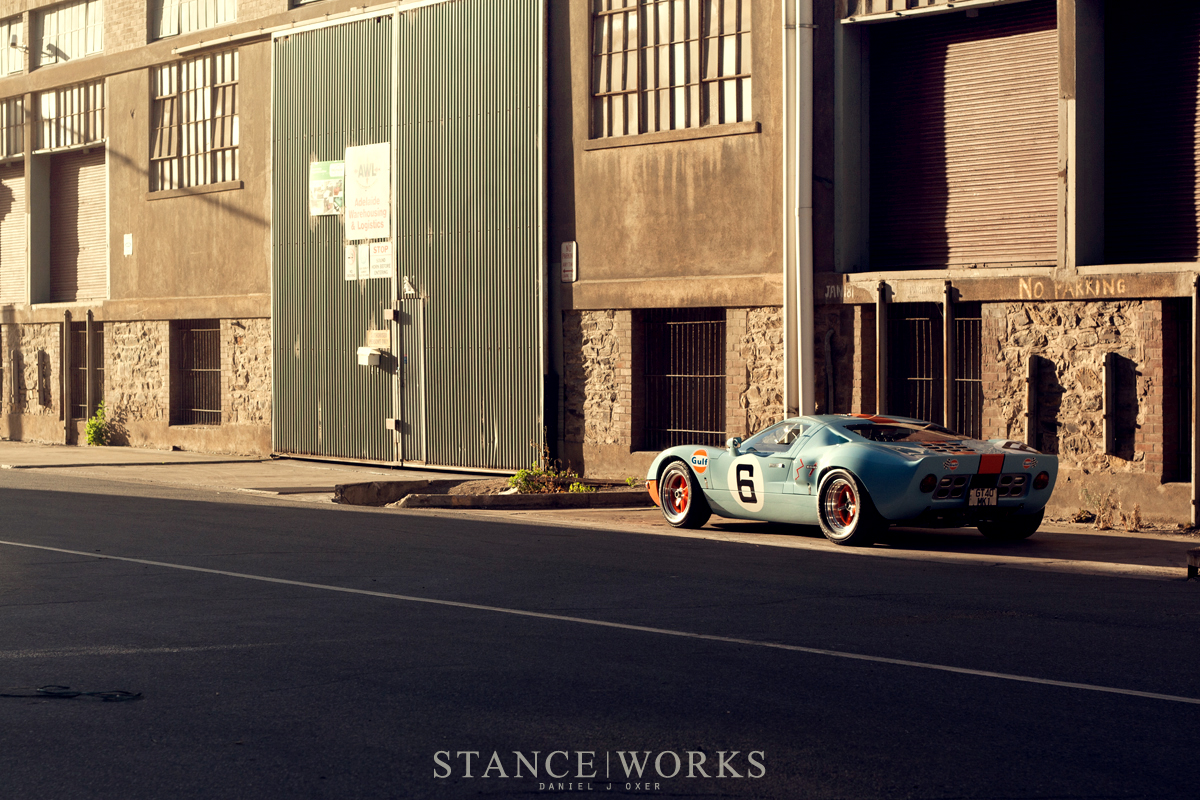 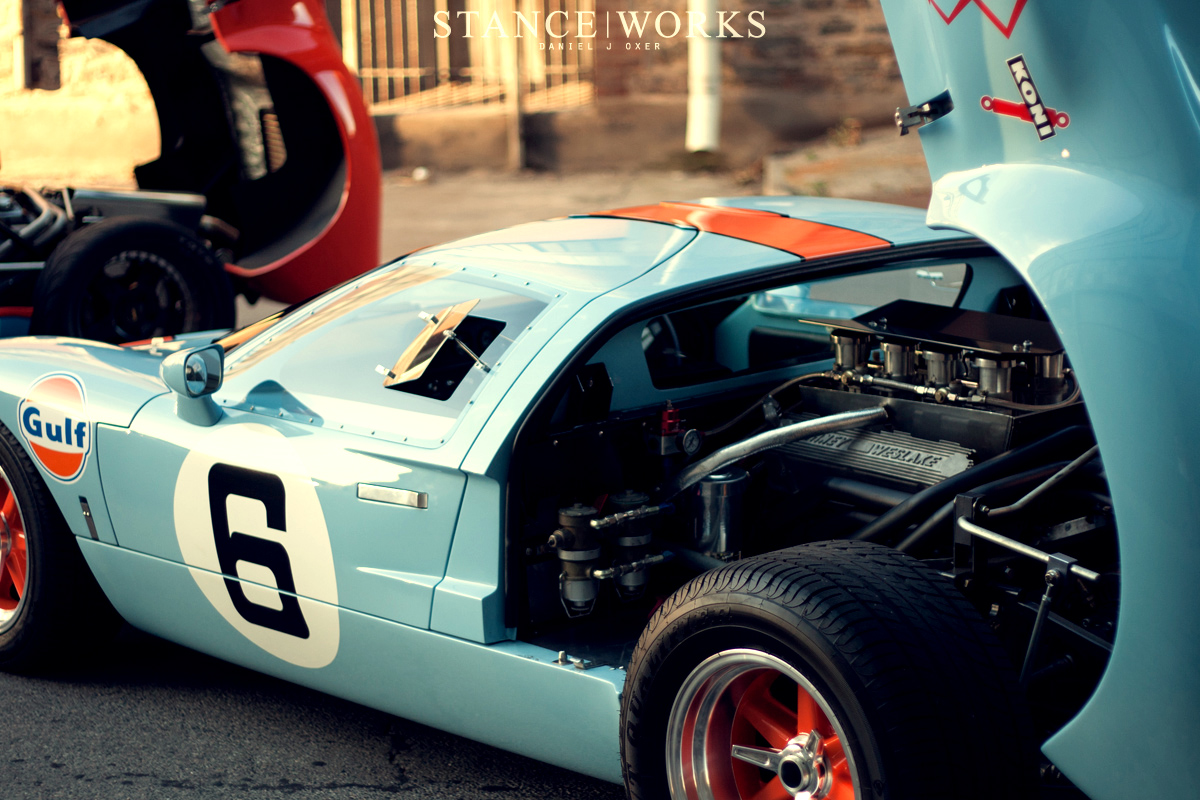 The car as you see it is an exact replica of the original, which is located in a museum in the US, but as Dino explained, the original was restored during its lifetime. I realised that no matter how old we are, when you love building cars, there really is no such thing as finished. Dino showed me the subtle differences such as the location of the number 6 decal over the rear wheel arch, and how on race day in both ’68 and ‘69 LeMans (which the original won consecutively) was slightly different, and explained how he is determined to rework the livery to be exact to the car on race day, and not how it sits in a museum. 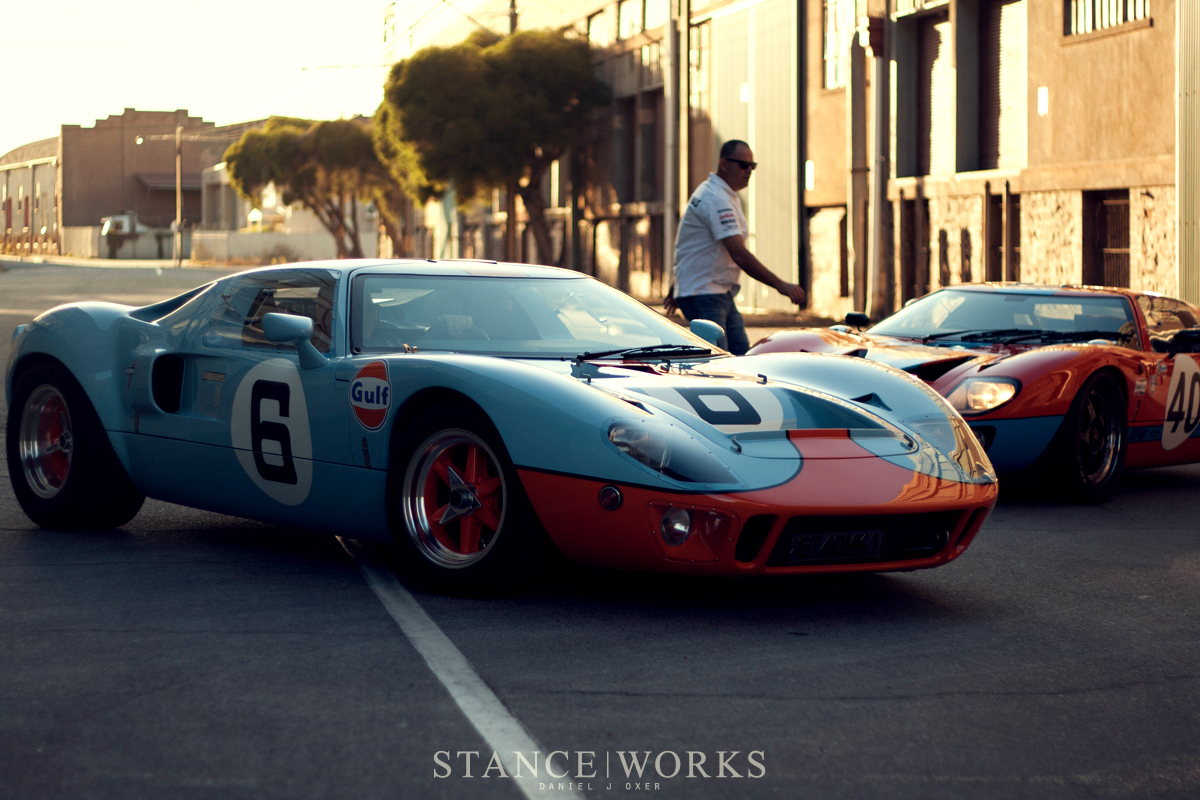 Both cars are driven through the streets of Adelaide when time permits, and this was the first time both cars were complete and together in one place. It’s ironic that both cars have the same original builder, yet have gone through such different channels. One showcasing a the quality of DRB sports cars, the other being sent to the US to be a complete mk1 gulf LeMans winning replica, only to end up 6kms away from each other. 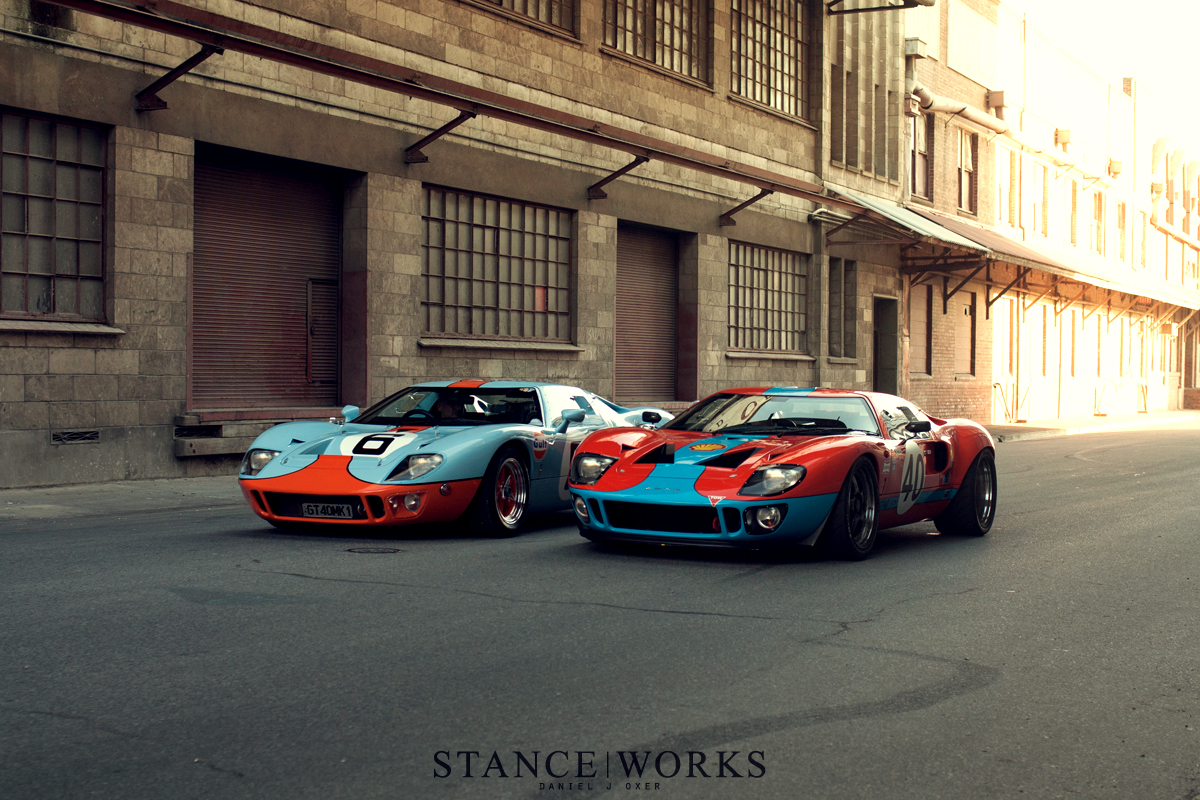