The highlight of the Rolex Monterey weekend is a rather simple pleasure. Long before the cars are on track, before spectators arrive; before most drivers, owners, and tech have even made their way to the paddock - that's when things are special. Andrew and I sat first in line, albeit a short one at 6:00am, to be the first to enter Laguna Seca, aside from the track workers and the lucky few who managed to bend the rules and get in earlier. A familiar fog enveloped and absorbed the entire course, save for maybe the peak of the corkscrew. It's beautiful, but that's not what makes it special. 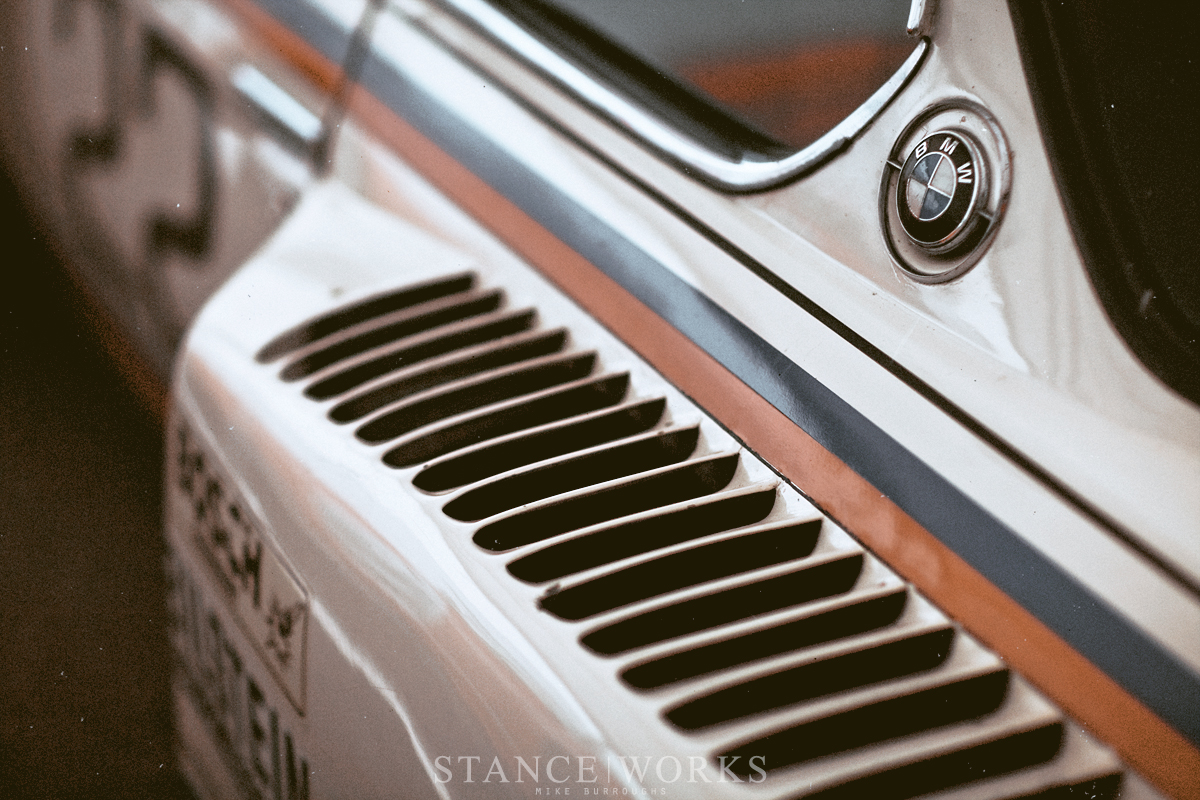 What makes dawn at the track so special is the hunt. Most of the cars in the paddock remain covered from the day before, their owners nowhere to be found. Some are hidden behind enclosed tents, attached to the side of race trailers and rigs. A few owners, however, beat us to the track, having pulled the covers from their cars to let the morning moisture collect and bead on every horizontal surface. It's these few cars, and the mystery of what you may find, that create one of the most memorable parts of the weekend. 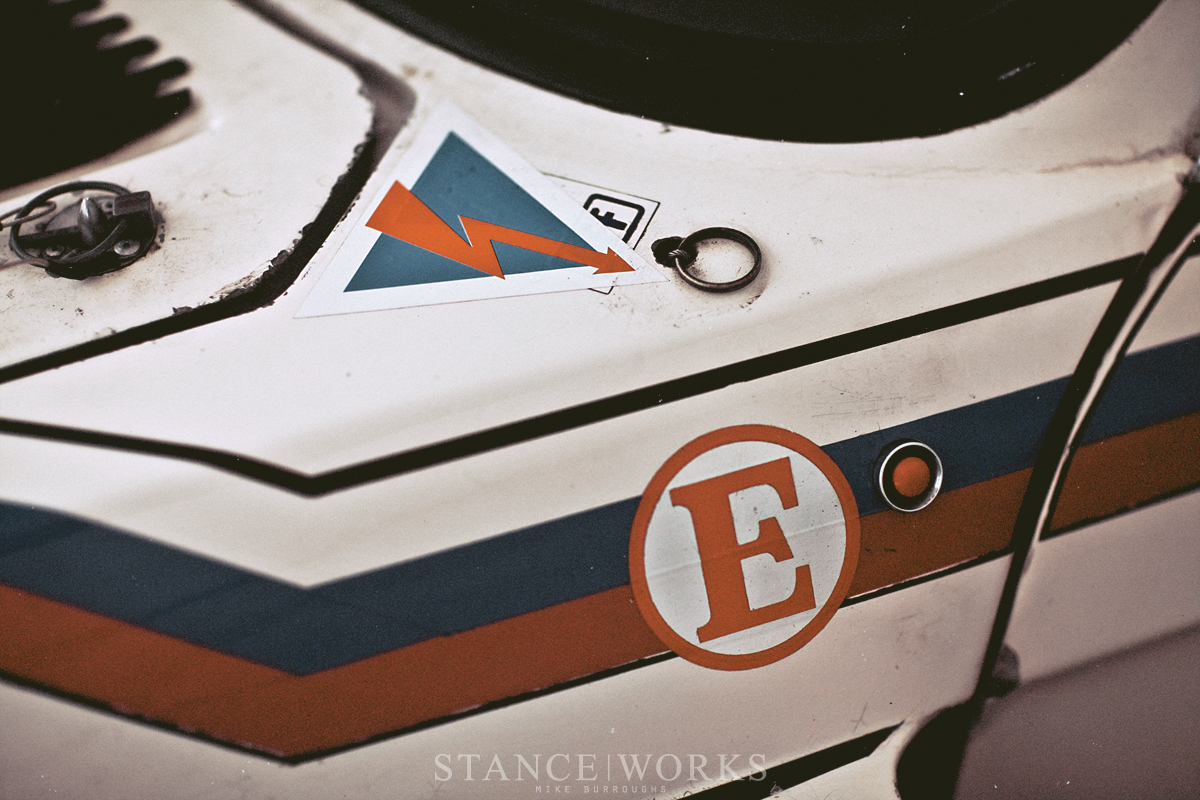 It could be a '70s Formula One racer, or a '50s LOLA chassis'd car that looks something akin to what a "Scooby Doo" villain might drive. It could be a 1912 National, the size of a 2013 Ford F650 Super Duty. It could be anything - and sometimes, you get lucky. For me, it was the first car I saw: a 1975 BMW 3.5 CSL, but not just any. What truly caught my attention was the group 5 kit, the same kit affixed to the Frank Stella Art Car. The kit that pushed the CSL's aesthetic into an unparalleled arena of aggression. 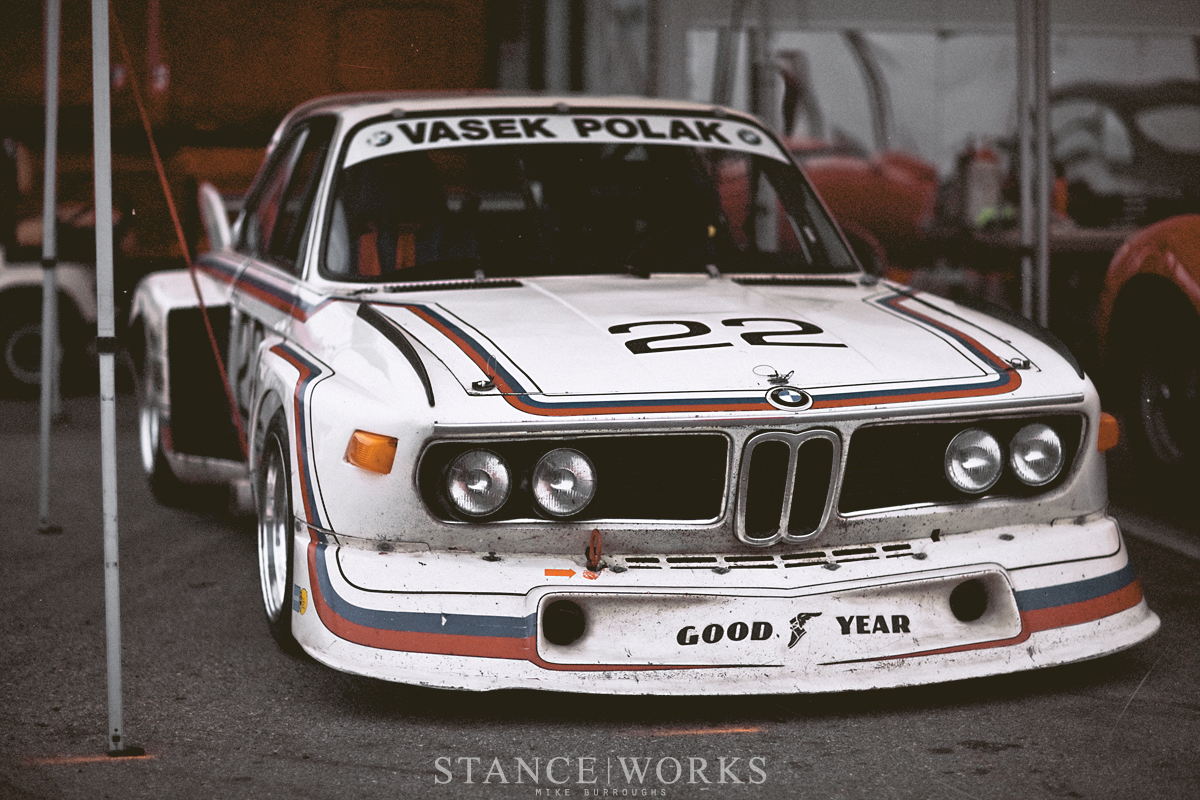 It was love at first sight. Even at 100 yards away, eyes squinting. But it wasn't until I got close that the car took on a new form. It was the details that ensnared me - details you wouldn't find anywhere else. Details that didn't come from the minds of the creative; instead, these details were earned. These details were unique; irreplicable. This car had a patina that said one thing: "veteran." 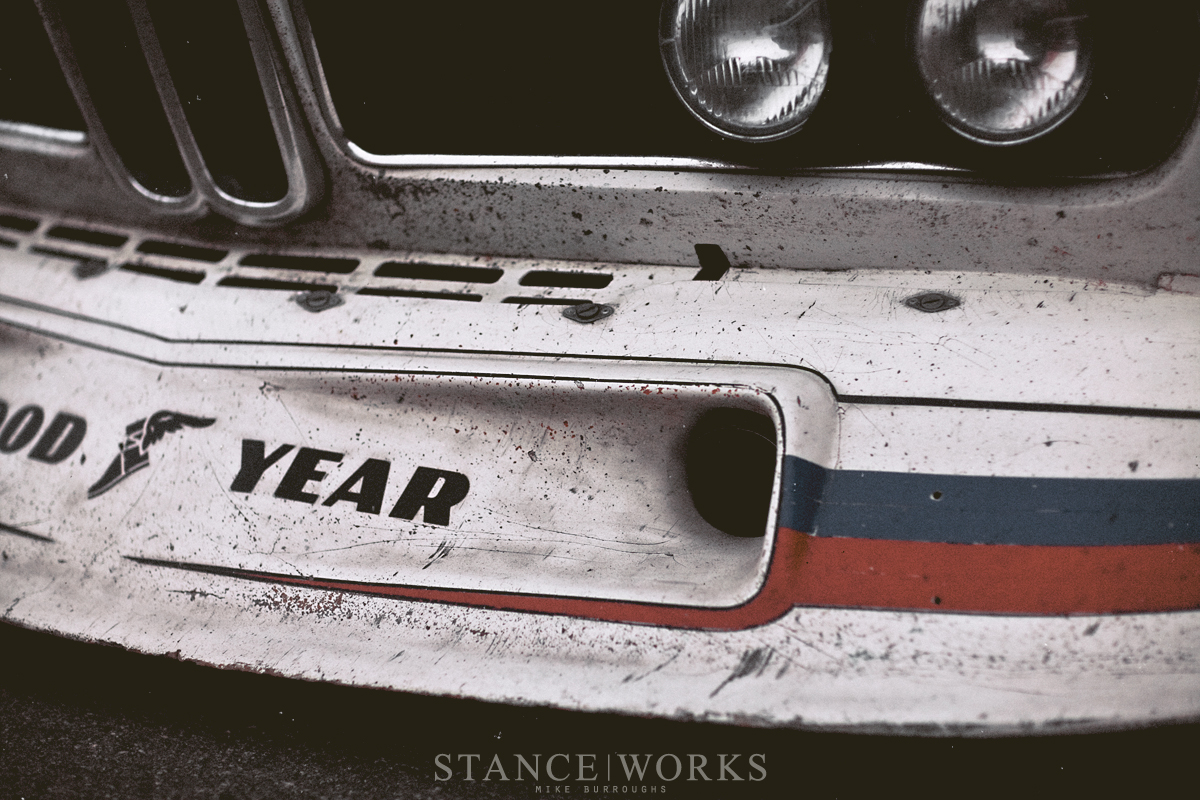 The monolithic air dam, jutting out from the chin of the car, was peppered - no, sandblasted with rock chips, each one speaking to a different instance of the beast giving chase. Each chip came from a certain track, a specific turn, tossed by a single tire of what may be an equally legendary car. In a world where cleanliness is often praised, this E9 said more to me than most ever have. I couldn't help but wonder where this car had been. What had it seen? I knew it was rich with history; more than most. 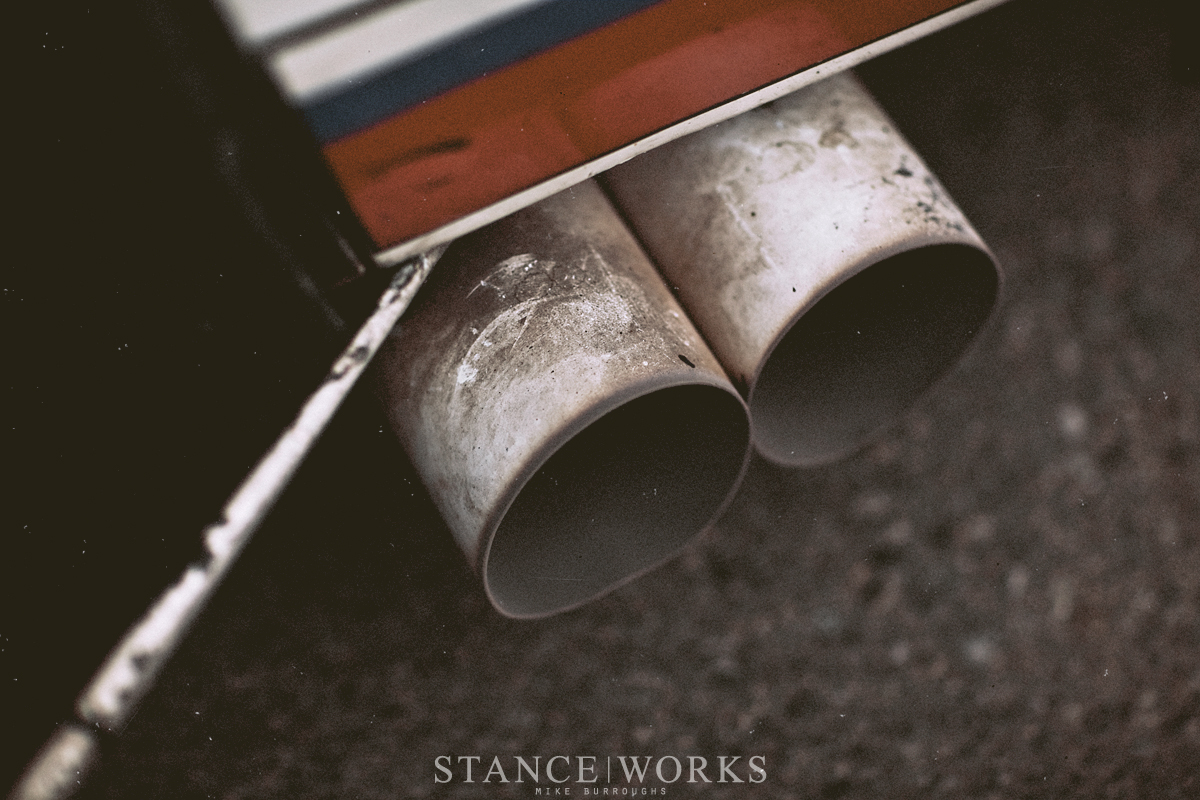 I traced the stripes down the body, starting a the nose as they outlined the brake ducts, dodging and racing their way to the tail of the car. Over the box flares and across the famous beltline, littered with cracks, chips, and history. The colors were unique; a livery I hadn't seen many times before. The pastel hues of the blue, purple, and red found on other Works cars were missing, this time in favor of a deep blue and an an almost burnt-autumn burgundy. As the stripes weaved their way to the tail of the car, I found detail after detail. Flaking paint and gouged panels. There I was, standing next to one of the cars I adore most, imagining everything it had been through. 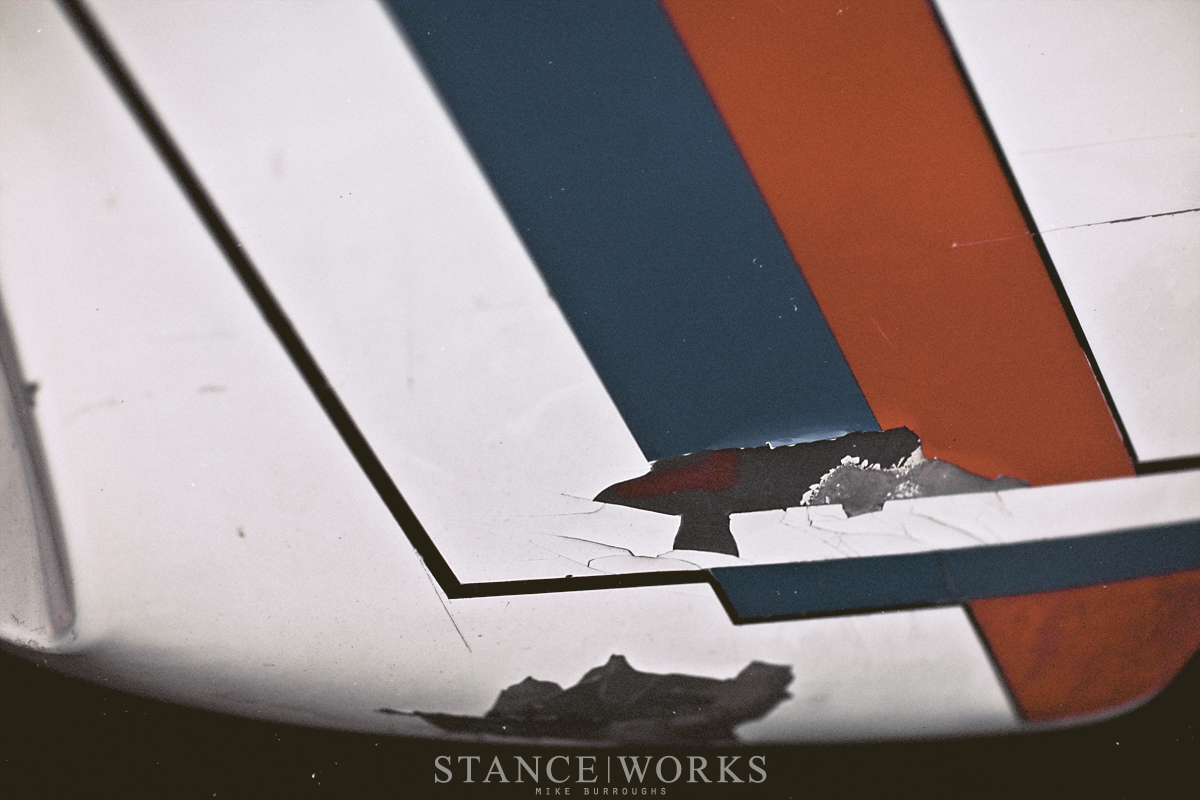 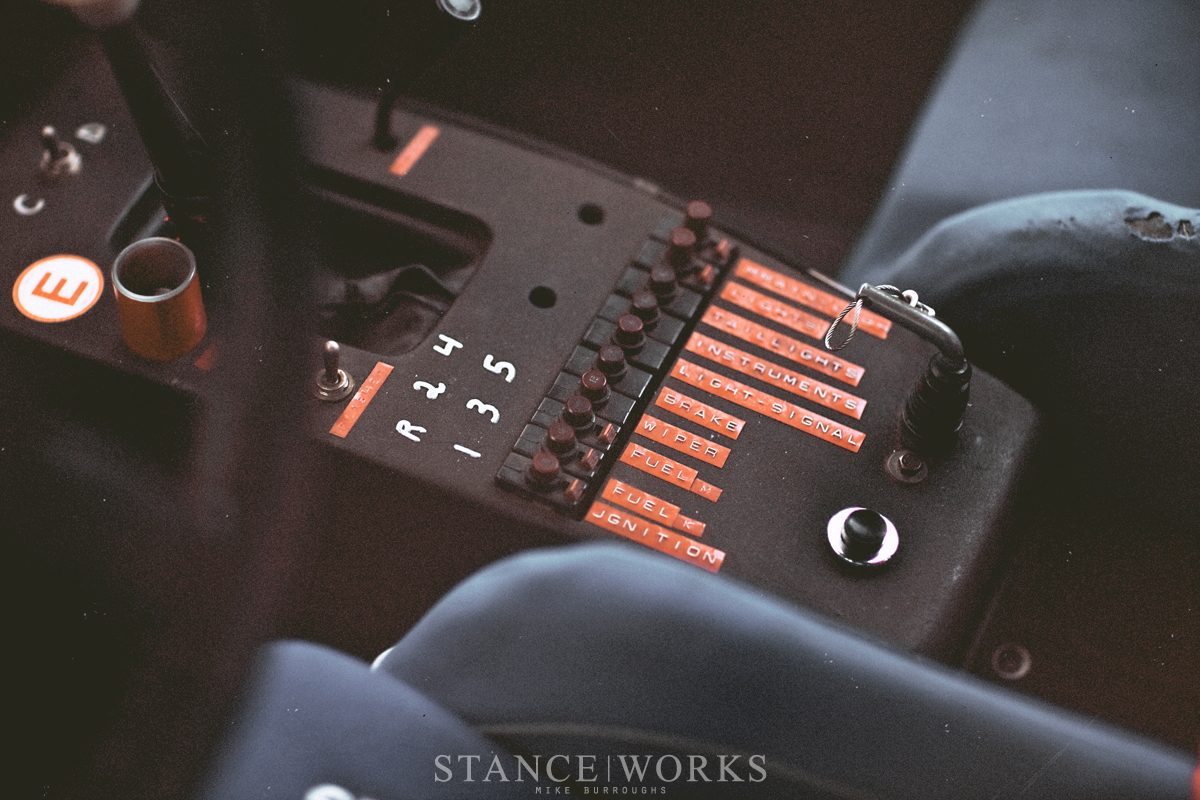 The vintage logos, from the BBS "Intermag" decal I had never seen, to the Bosch and Bilstein decals that plastered the arches, stylized in a way that seemed almost out of place, all of which too were tattered and smeared by black streaking from hot rubber - I was in love with every bit of it. The faded and torn blue seats, and the cracking and aged stamped plastic labels that lined the interior... there wasn't a detail I could ignore. This car's age, its history - it was all beyond what a museum piece has to offer. It was earned and preserved in a way that can't be duplicated. This car was one of a kind, and still, I craved to know what trials in life had hardened it, molded it, and left it scarred. 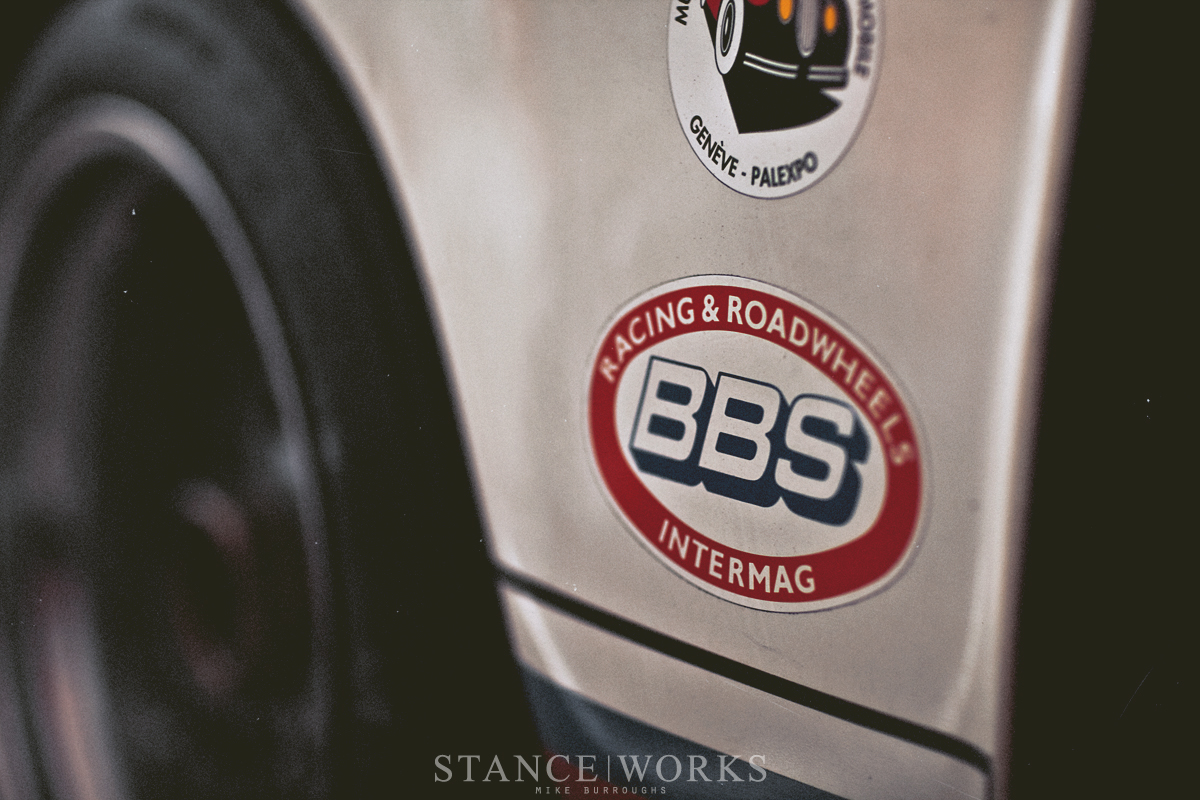 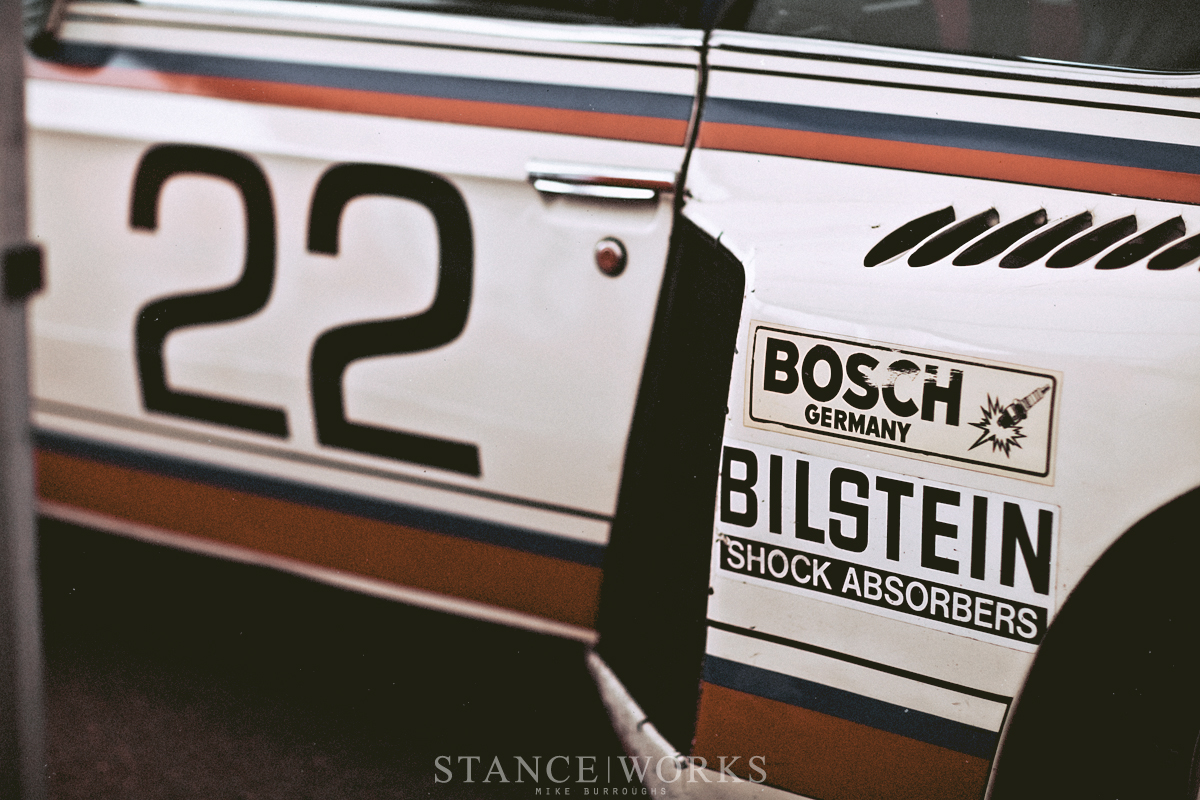 But it was as my eyes wandered over the car that I noticed the names that graced the roofline. "STUCK / POSEY." And it was in that moment that I knew where this car's roots were affixed. This was the car that championed the 12 Hours of Sebring in 1975, piloted by the heroic names of Hans J Stuck, Brian Redman, Allan Moffat, and of course, Sam Posey. This car had more than just history: it was a legend. From the 1975 IMSA series in America, to the '76 ETCC series in Europe, and then to the hands of the famed Vasek Polak, this car had more than history: it had clout. 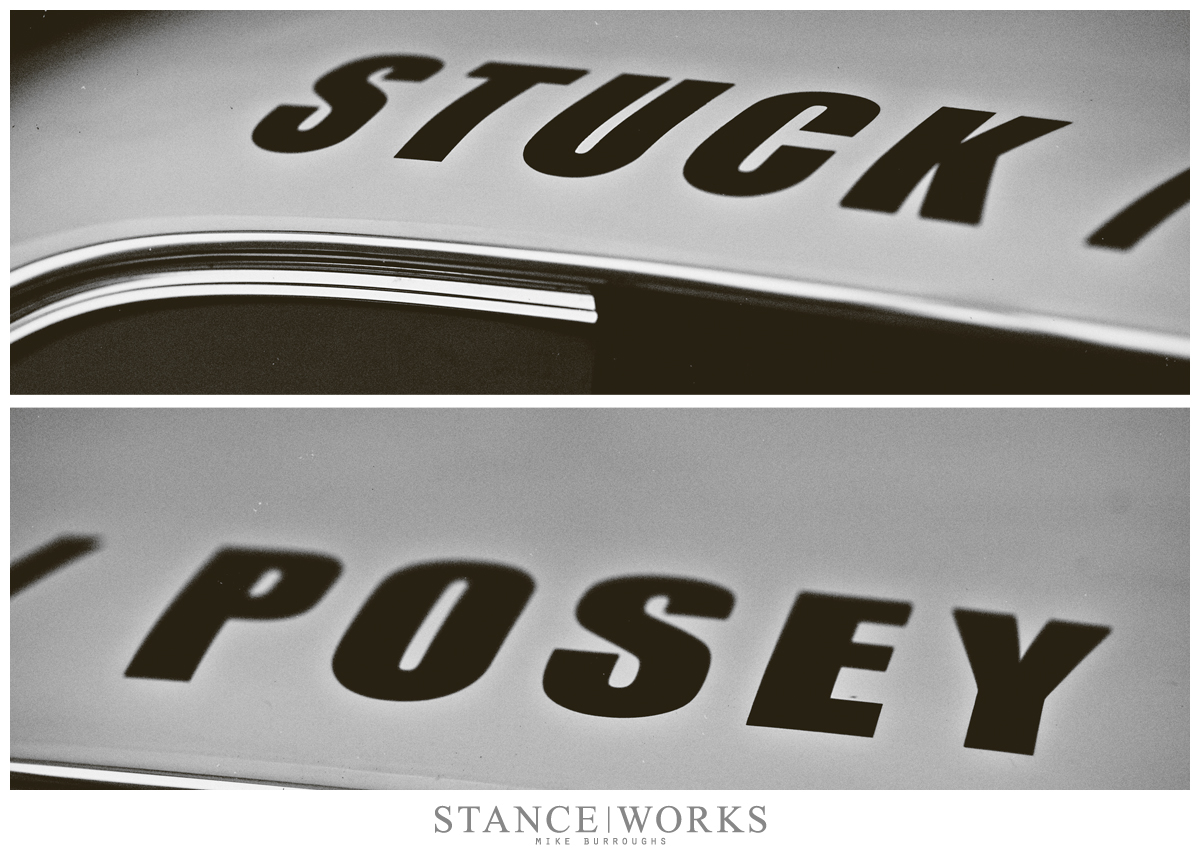 While it would have been great to attach the car's patina to such a special history, I found that the car has been painted at least once. Restored too, in 2007. I have no idea whether it was a mechanical restoration or body too - There's no way to know how old this legend's livery truly is. At first, a sense of disappointment hit. These weren't rock chips from the fleet of 27 Porsches this very car had to overcome and defeat at Sebring in '75. Those had long since been removed - gone forever. But then my sense of excitement rose. The implications meant that this car's history continued. Once upon a time it had been painted black, and now white again; who knows what in between. Now in the hands of Andrew Cannon, the car is still raced; put on track to earn its victory marks and defeat blemishes. Its history still as unique as it has ever been; its patina as historic and irreplicable as ever before. 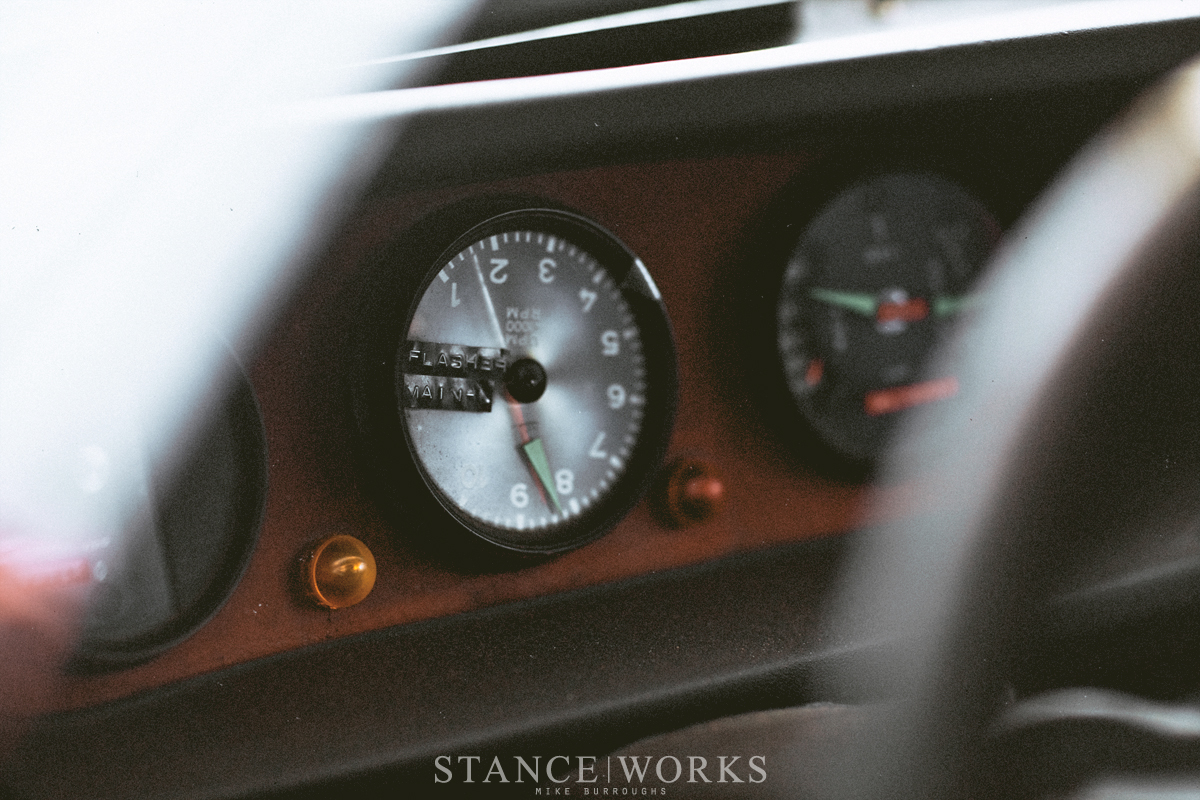 I watched the car take to the track that afternoon, thrilled to see it amongst fellow icons like the Porsche 935. It was gorgeous, and I was eager to see it come around the final turn time and time again.  Yet I failed to remember that this car's unique patina, the one I spent an hour simply gawking over, will someday be reset again; painted over and wiped away from history. The car nailed the wall at Laguna Seca, crunching the front end on both sides. It sat with the fenders peeled back like bananas and the front wheels sat pigeon-toed thanks to snapped tierods. 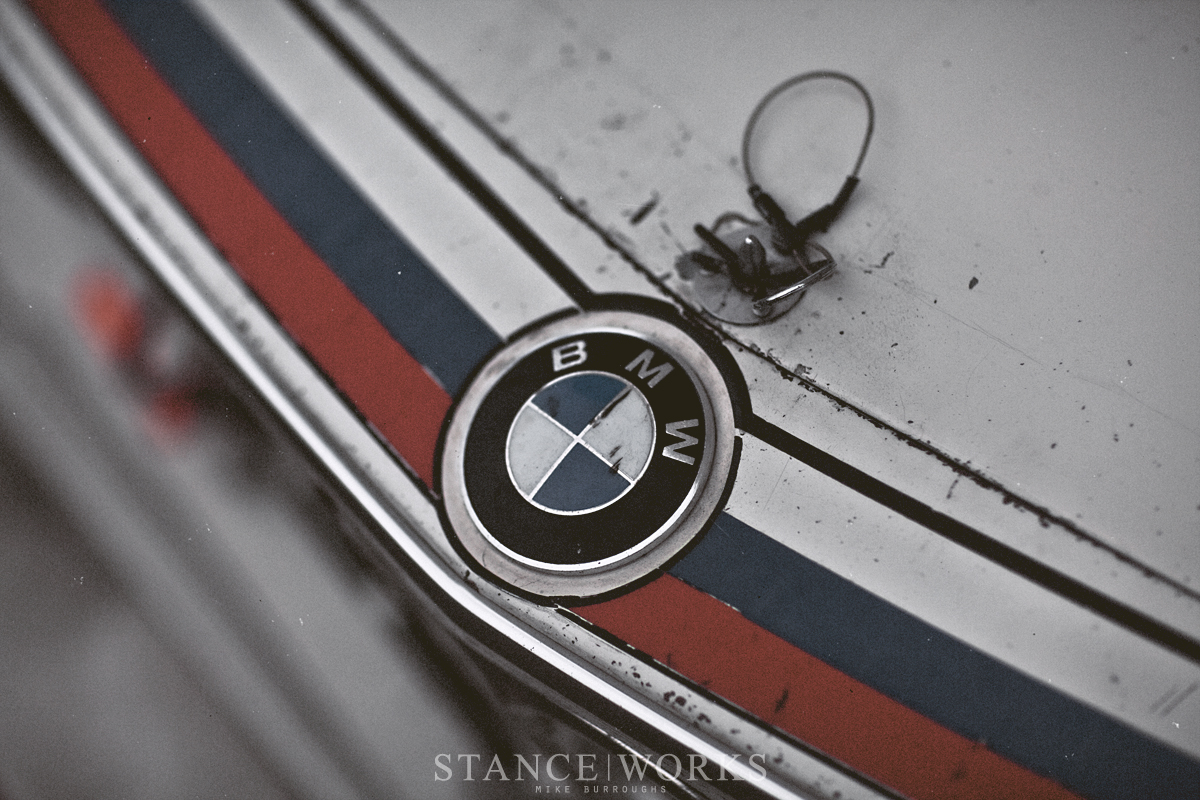 The car was crunched. Bad. I begged to take photos of it, but the car was quickly rushed under a blue canvas tarp, hidden from prying and curious eyes like my own. I'm confident the car will be back. Positive, even. Yet I know next time I see it, the paint will be glossy, the body straight. Yet perhaps I will be lucky enough this time to watch it slowly earn a patina once again.