The Mercedes W124 300CE you see before you belongs to a fellow named Tom Heap. I first came across Tom’s car on the StanceWorks forums, where he went under the guise '‘lowbenz’'. It was one of those cars you expect to see online, and at the usual car show calendar throughout the year, but never locally. So naturally, when I discovered Tom only lived a couple of miles down the road, I had to meet him and see this vehicle in person. Not surrounded by other cars, or cast out to the ‘non-VAG’ and car park sections of shows... On its own; fully appreciating the graft and hard work Tom has put into this car to succeed in creating what you see here. 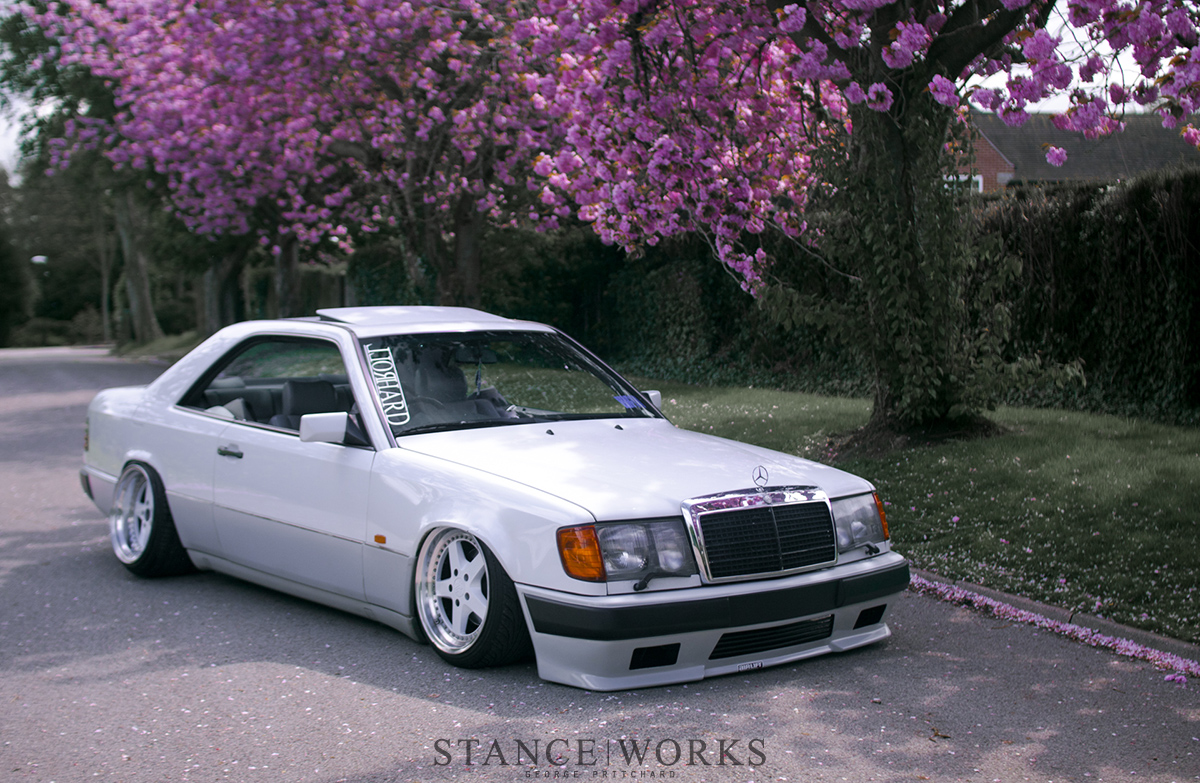 We exchanged messages through all the usual social networking mediums, Facebook, Instagram and the forum, yet we had not met. I felt with the Internet presence this car was gaining everyday I had already seen it. It was easy to understand why the car getting so much publicity. Who doesn’t love to see a perfectly executed German 80’s big body coupe lying down on the tarmac? Having arranged to meet over the weekend yet welcomed with rainfall, we found that Monday morning worked for us both. Playing it by eye on the weather, Tom kept darting outside wiping down the car ready, between what seemed like monsoon like showers. Finally a break in the clouds came and we took the opportunity. 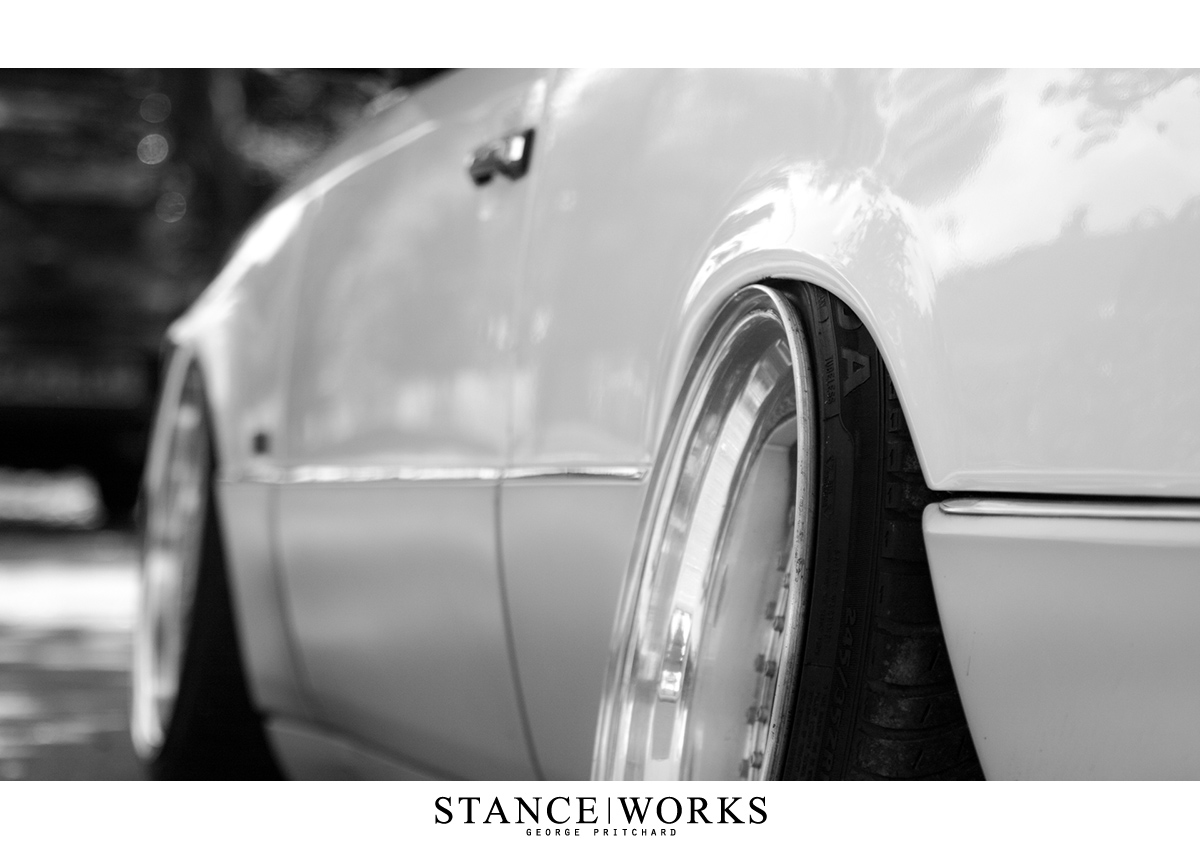 Waiting at my place, I asked Tom to meet me outside where I waited, listening out for the distinctive low rumble of a three-litre straight-6 engine pulling up outside. He arrived and after a quick ‘Hello’ we set off to get the shoot in, before the weather turned for the worse again. On the move, this car looks just as mean as it does on the ground. Driven at street-sweepingly low heights, I found myself cranking my neck to see it in the rear view mirrors through every turn. 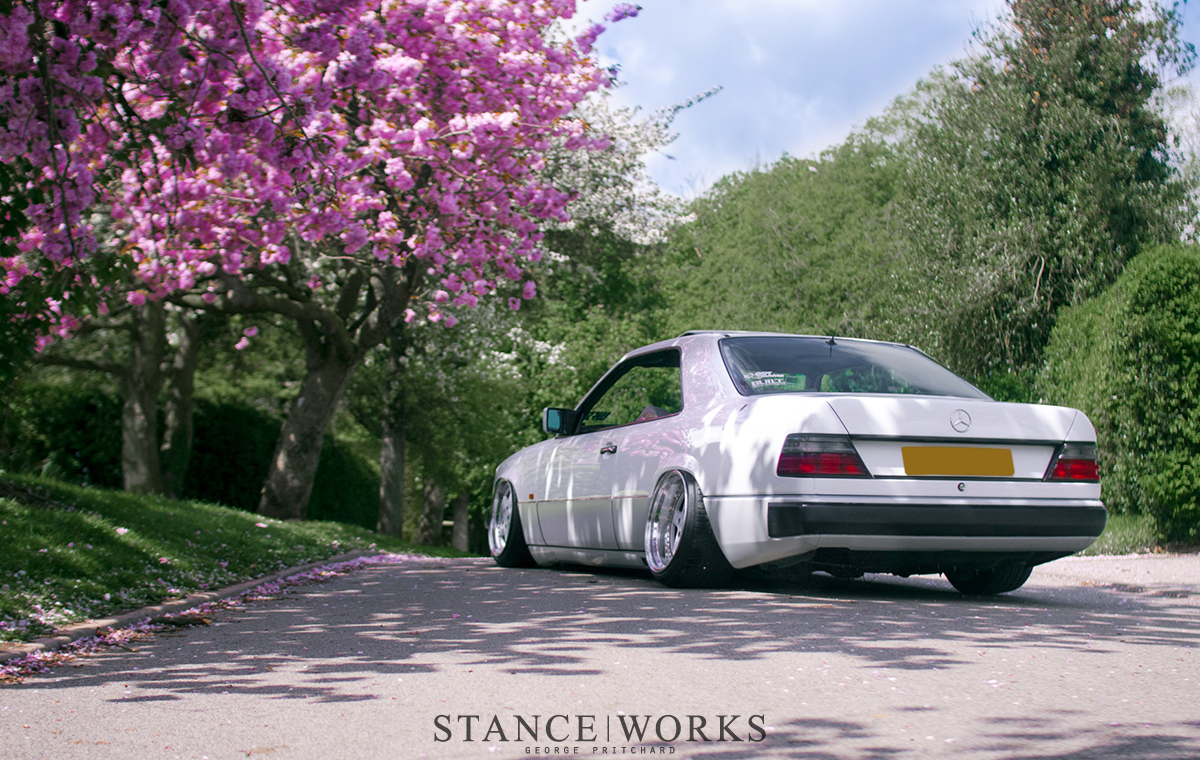 The location was found by pure coincidence. I was talking just days before about how I would like to do a photoshoot under some blossom trees now spring was around, and, as I walked my dogs on Saturday evening, I stumbled upon this small piece of road. The road led only to a section of the local private school and a couple of houses. Nice and quite on a weekday morning. After asking Tom to park up, I gathered my gear from the back of my car and began. Tom began disclosing the hard graft he has put into this Mercedes in his 6 months of ownership thus far. 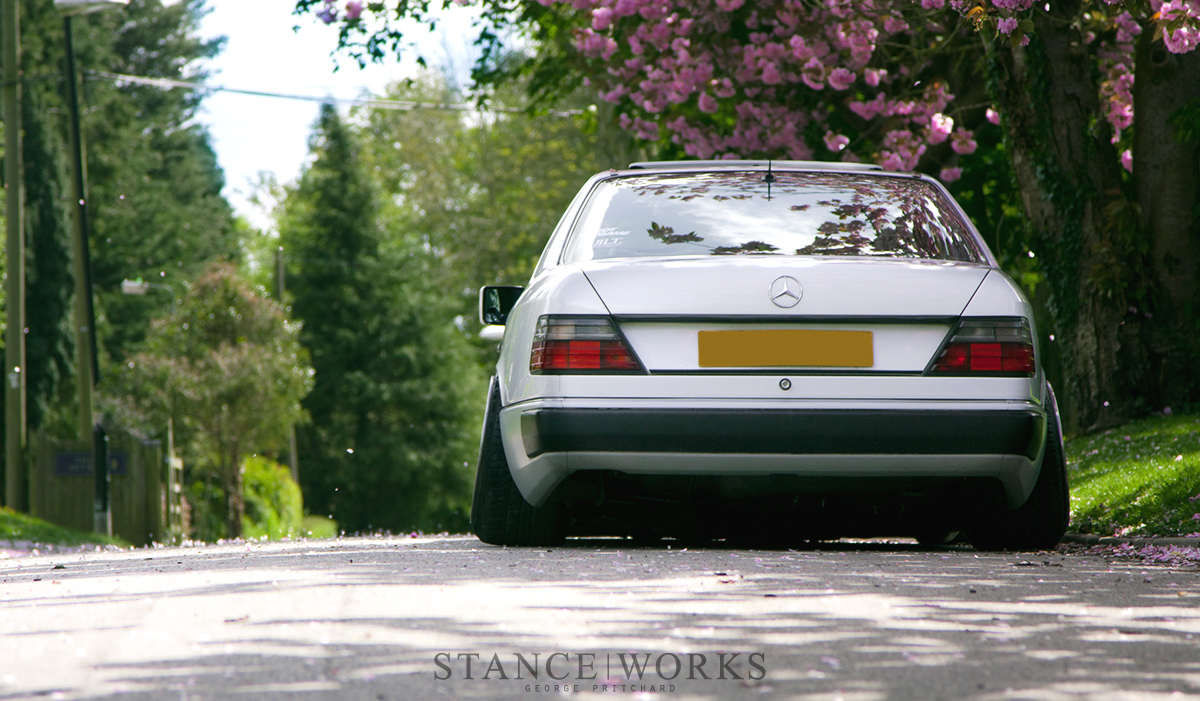 He explained how it began with the search for a 190E. Coming from a Mk1 VW Golf Cabriolet, Tom preferred cars with 80’s styling. With nothing appearing on the local forums and classified that took Tom’s fancy, a friend let slip that they knew of someone local willing to part with a rather neglected 300CE: the one seen here, in a classic two-tone paint job; white on top of a pale grey lower body in need of some work, with sub-par suspension and some other niggles after 20 years of neglect. 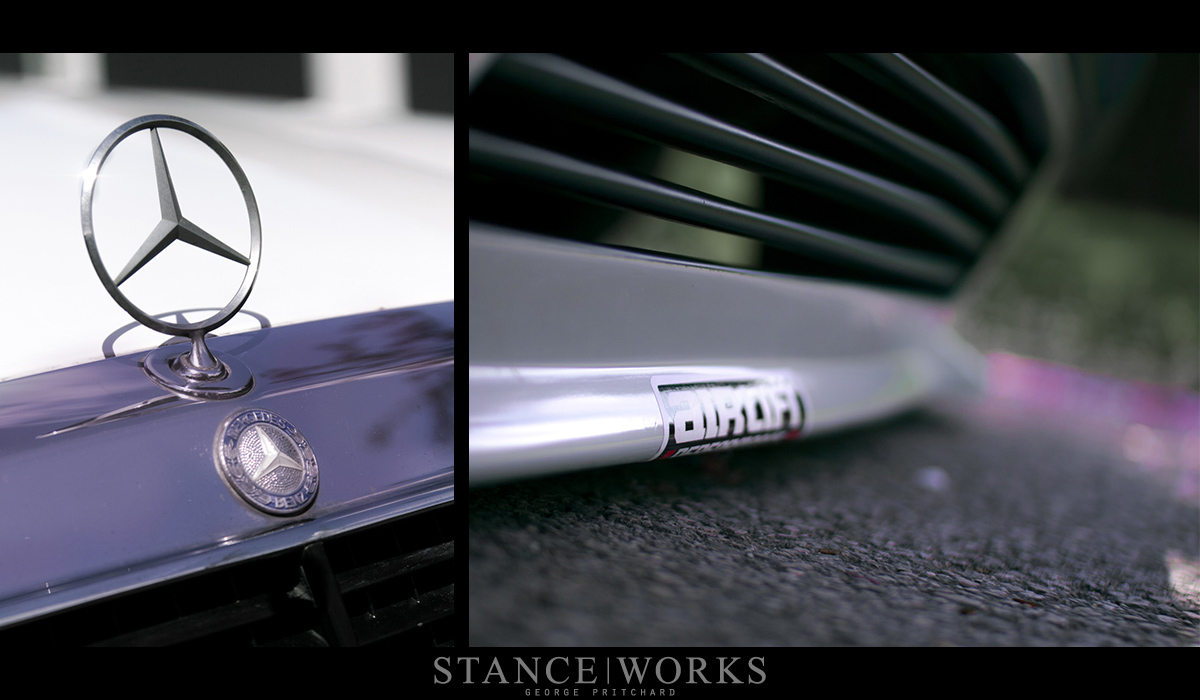 Plans for the car were originally to keep it clean, low and used as his daily. Fitting a custom built set of E36 coilovers was soon completed and matched with a set of AMG Monoblocks. However, Tom continued, and this iteration of the car did not last long. The engine of this 300CE is the lowest point, and after breaking the sump one rainy evening on a cat's eye, something had to change. Going lower and retaining the usability of the car was top of the priorities list. A set of double-bellow airbags were ordered from America and shipped to the UK, and, coupled with a pair of Viair compressors, a 5-gallon tank and DANZ ½ inch solenoids, a winter rebuild began.

Not one to shy away from custom fabrication, Tom commenced with constructing homemade bag mounts. An off-the-shelf kit was not available for this chassis, yet that did not faze him. Starting with a 5mm plate of aluminium, brackets were cut to shape and bolted in. Utilising the E36 struts with removed springs up front and modified S13 Macpherson struts out back, the 7” bags slotted perfectly into place. To complete the setup, home-engineered top mounts were fitted, manufactured on his lathe.

Such custom work thus far required a special set of wheels to compliment the car. Always pushing forward, Tom acquired a set of 2-piece Impul R5 alloys, and, not happy with the standard widths, they were split down and converted to 3-piece. Custom lips were ordered for the rears, resulting in a set of one-off alloys: 17x9J in the front and 17x11.5J in the rear.  The faces were treated to a coating of matching white paint. 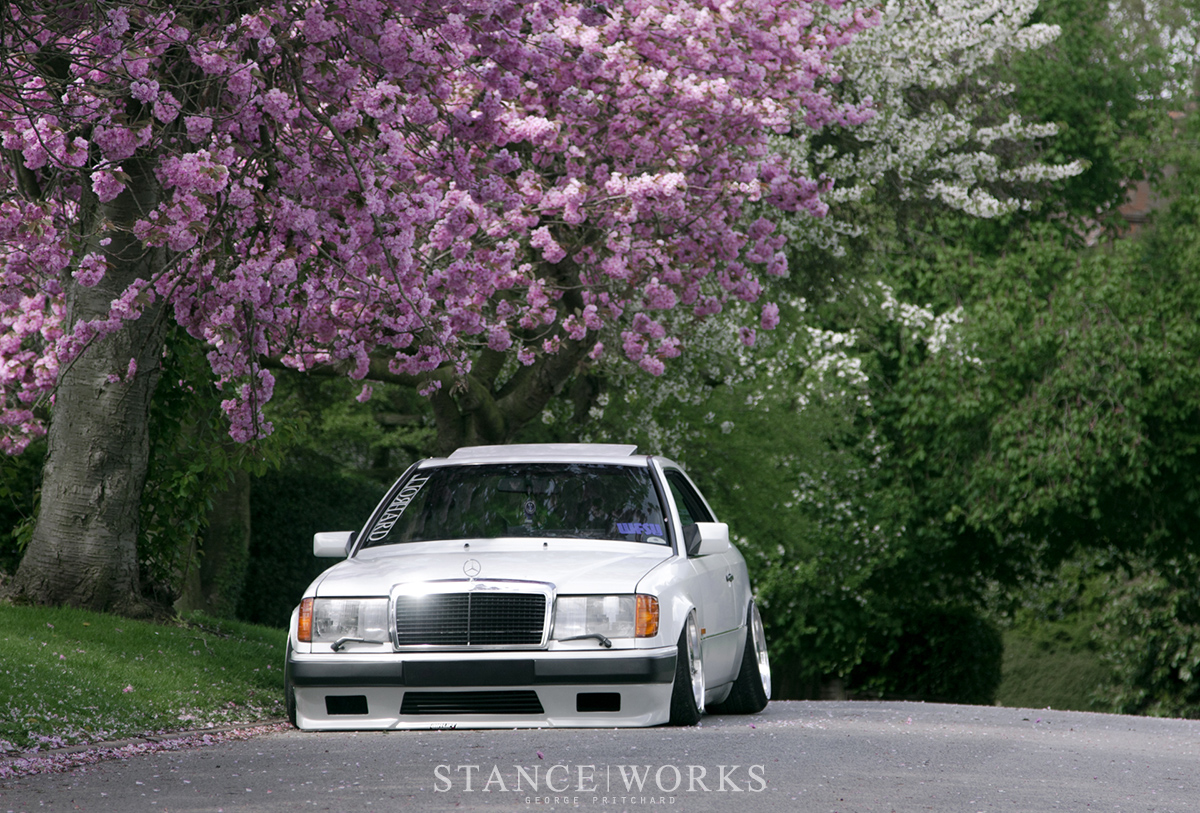 The result? A beautifully set up car. The Mercedes is tucking the 9J wheels up front, and with the rear arches rolled flat to squeeze in 245 tyres behind them, just millimeters separate the metal of the car body from the polished wheel lips. Tom nailed it. The slight rake from front to rear, the front bumper tediously close to touching the asphalt, side skirts that catch on the slightest of inclines... I'd argue that it is not possible to lower this car any further. 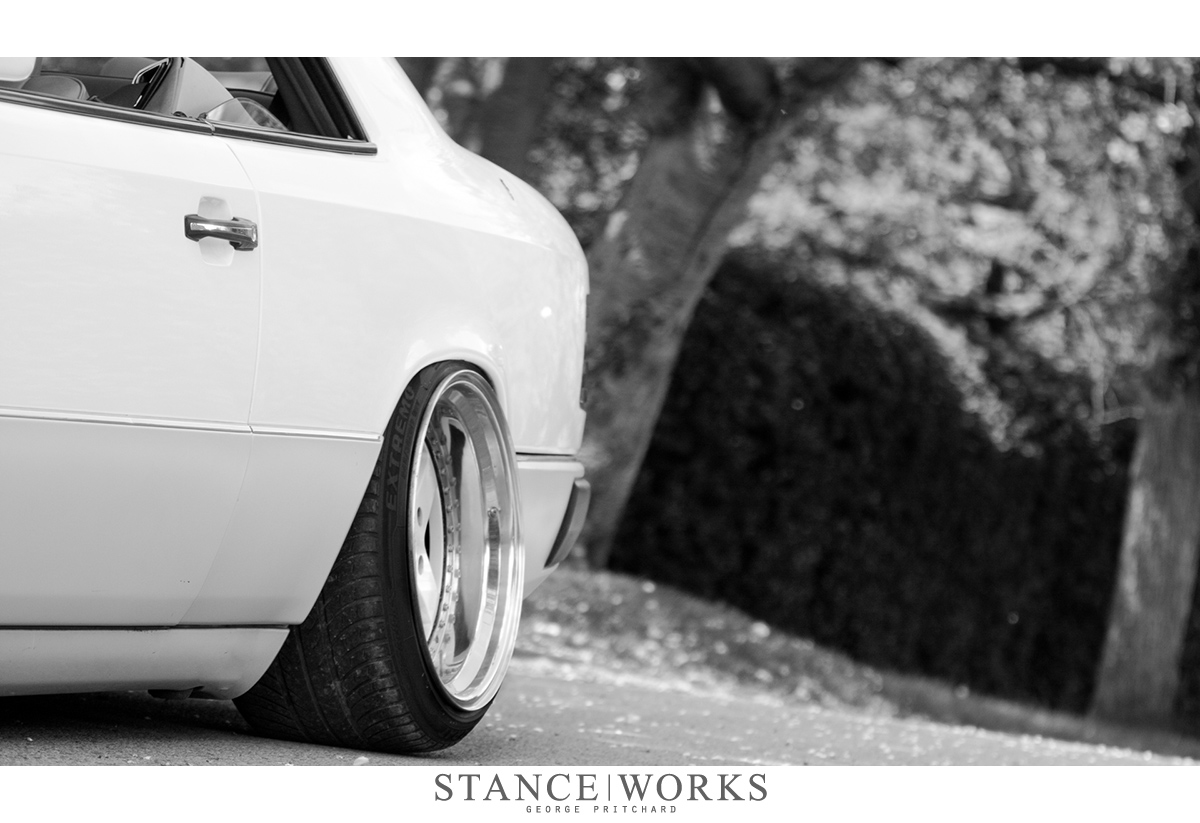 Exterior wise, the 300CE has been fitted with an AMG front bumper, sprayed just 1 week ago. Unsurprisingly, it has already cracked from being driven too low. Smoked rear lights and amber indicators complete the look. Tom explains the car is still far from finished. A rear duckbill spoiler is to be added in the near future along with some replacement wings. 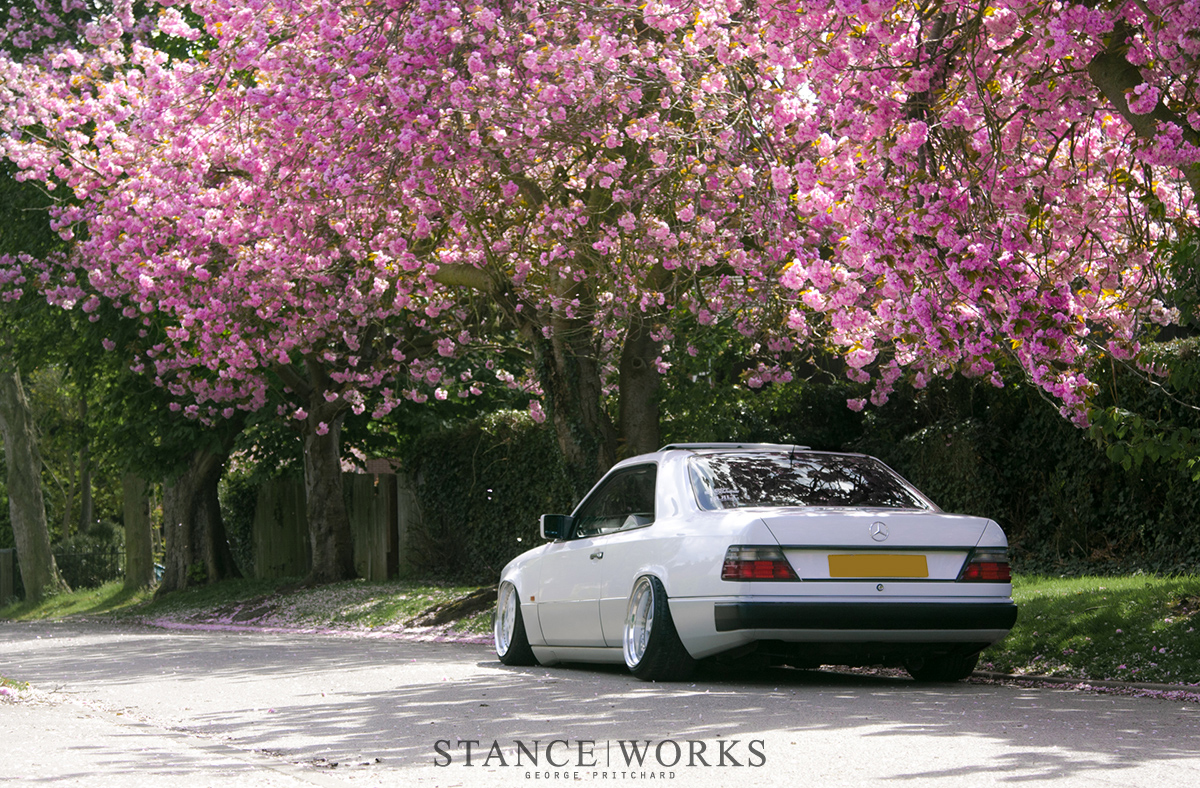 Simple execution keeps this car standing out from the crowds. Clean, fresh white bodylines run from front to rear. The two-tone paint, pillar less doors and drop down rear windows define all that is classic German styling. Headlight washers, real wood interior trim, and leather cover most of the interior detail, showing just how luxurious this car was when it was released. Designed in the 1980s, and refined today. Tom’s 300CE is a car I will look forward to seeing time and time again. Not just for the awe inspiring aesthetics, but to catch up with Tom himself. A genuine guy who has no problems with helping out others: it is for people like Tom I am involved with the car community. 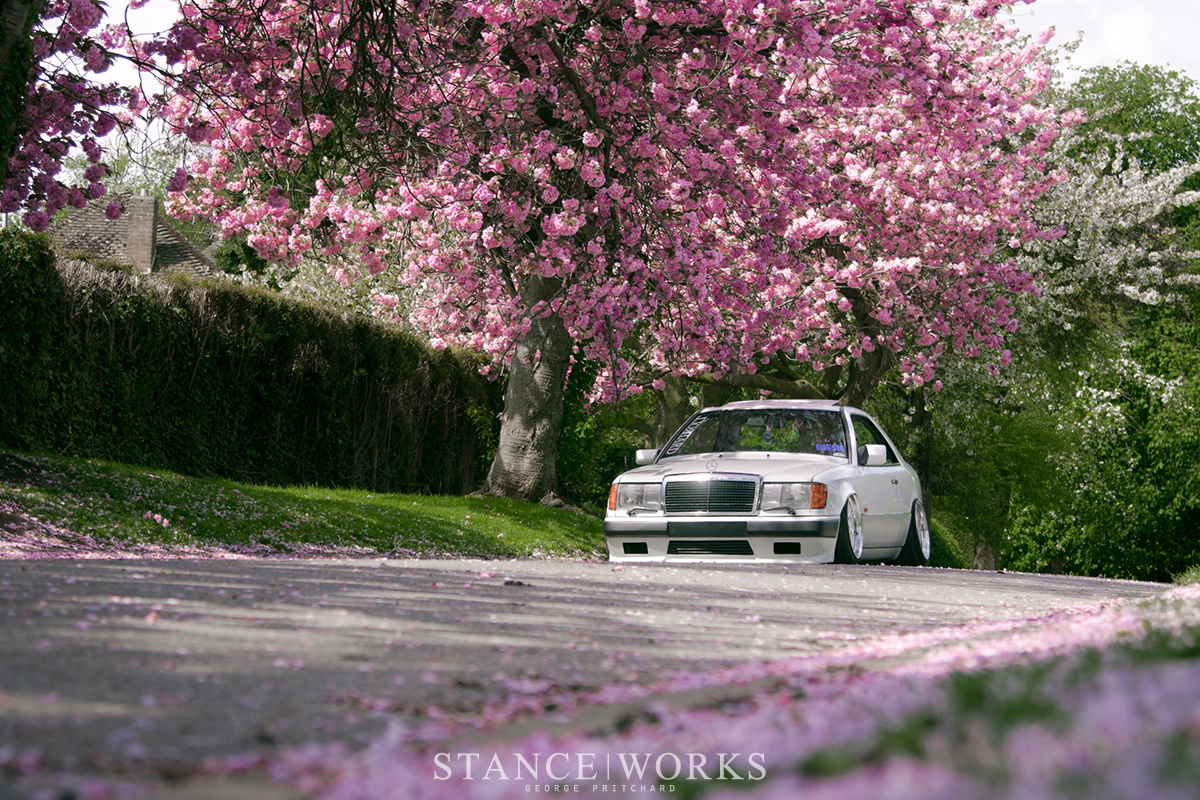