Duality is an ever-present phenomenon in our everyday lives. It’s an interplay between mind and matter that allows us to structure an understanding of our reality. Good versus evil, hot versus cold, right versus wrong, and the one that has emerged recently in the automotive world: form versus function. We develop these dichotomies to compare and contrast the objects that we encounter and they allow us to apply subjective values to them. They allow us to define our likes and dislikes, what’s cool versus lame, and what should and should not be done. 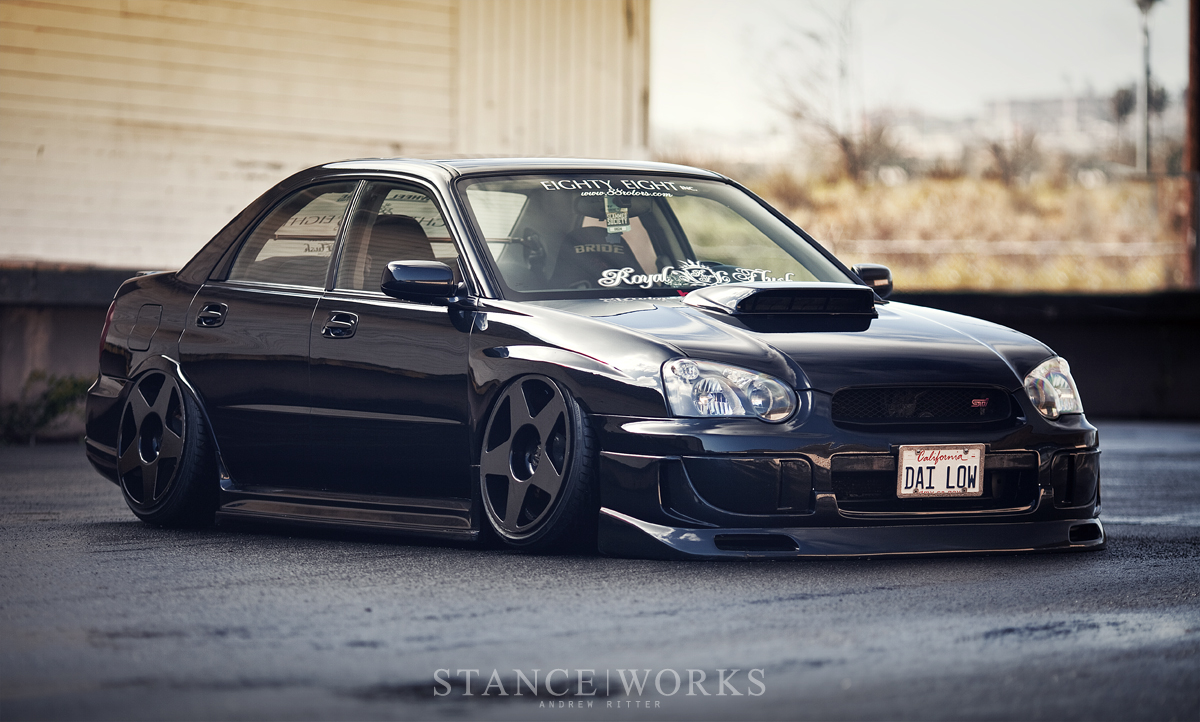 As the golden light of an early Long Beach morning broke through the clouds, it cast an orange light across the blue pavement of a recent rainstorm.  Often referred to as complimentary, these contrasting colors work together to clearly define objects and compositions in art. We had the perfect lighting on our hands and our subject matter was a bagged Subaru that contained its own diametric nature.  Adam’s Sti exists in a place between these opposing elements and toys with the relationships present between them in a way that is sure to spark at least a few discussions. 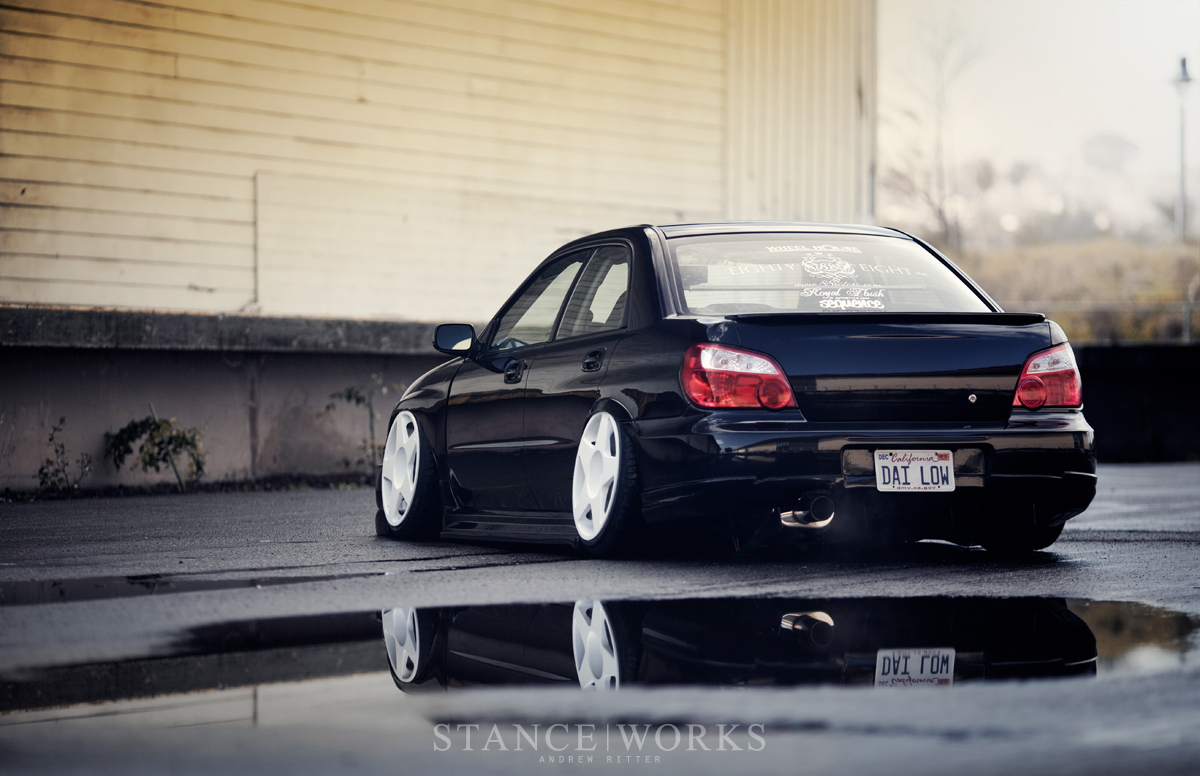 With the emergence of the stance scene, a spotlight has been put on the aesthetic notion of form versus function; a discussion that has roots dating back decades in the architecture field.  Many people are quick to pick a side and sling judgments at those with contradicting tastes, so it’s inevitable that a picture of a bagged Subaru will be met by some opinions that this STI should be a rally car or that it shouldn’t be lowered so much.  There’s no denying that the Subaru Impreza has a long lineage of rally racing and it’s one that we all hold in reverence. With that said, we also appreciate a well executed Subaru that is lying on the ground despite its seemingly irreverent nature. The primary benefit of air suspension is the ability to bridge this gap between show car and enjoyable sports car. With the flick of a switch, Adam’s Sti is laying its front lip on pebbles and his wheels come in contact with the wheel arches. Once he’s done showing off his pride and joy, the bags are filled with air, the effective spring rates are raised, and his car returns to an appropriate ride height to enjoy the sporty handling inherent in every Subaru Sti. In an almost Jekyll and Hyde transformation, his car is able enjoy both sides of the form and function argument. 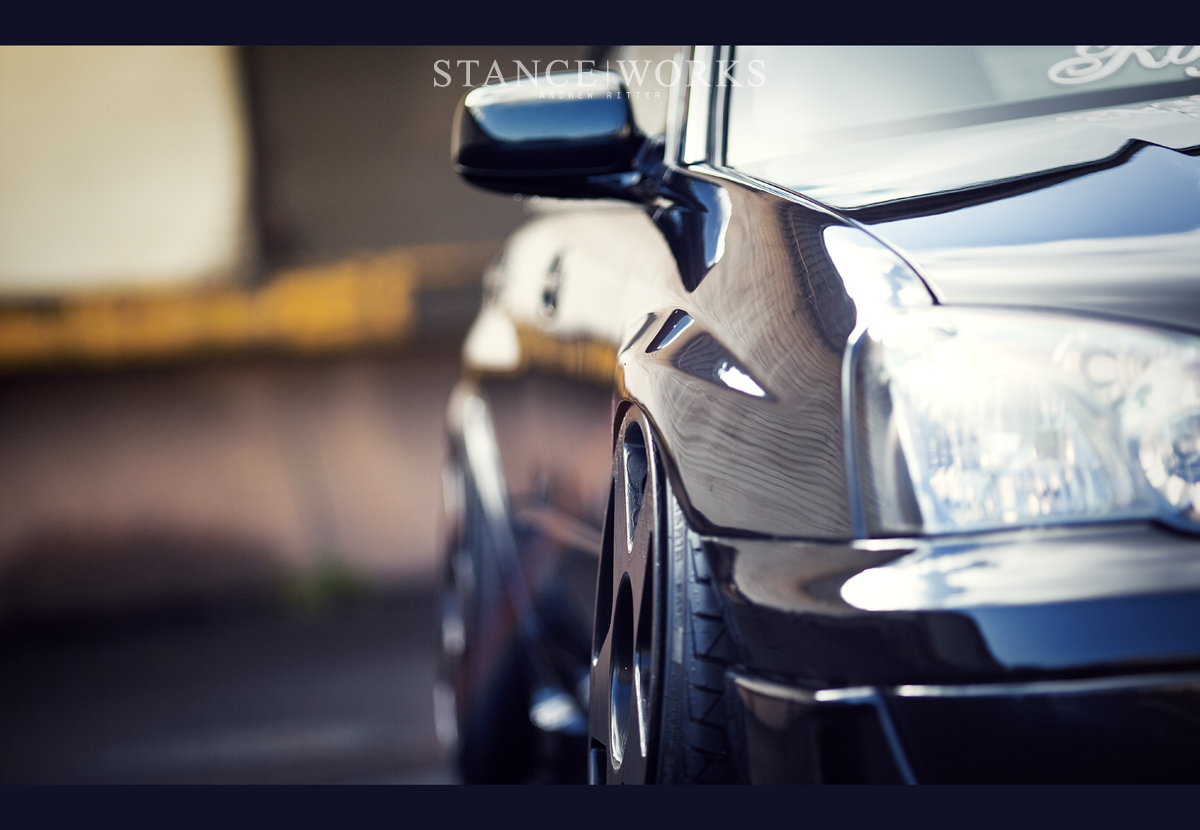 Following the Jekyll-Hyde nature of his beast, Adam is running two opposing wheel colors. On one side there’s a set of black Tarmacs that give an evil and menacing look while the other side sports a set of gloss white Tarmacs that give a nod to the white wheels that are so familiar on the dirt roads of rally events. As soon as he saw the unique wheels, Adam was getting in touch with Matt from Fifteen52 to snag a set of Tarmacs for his Subaru. Fifteen52 approaches design in a unique manner that is in-line with this notion of duality. With their wheel designs, they seek to offer solutions that are both fashionable and stylish while also paying tribute to motorsport aesthetic. The 18x9.5 Tarmacs give this Sti a strong motorsport feel with their simple appearance and classic 5-spoke composition. At the same time, the perfectly flat face of the Tarmacs and deep drop centers really emphasize the aggressive fitment that Adam has achieved with his airride. Once again, he has found a way to turn contrary aspects into complimentary styling cues that express his own personal tastes. 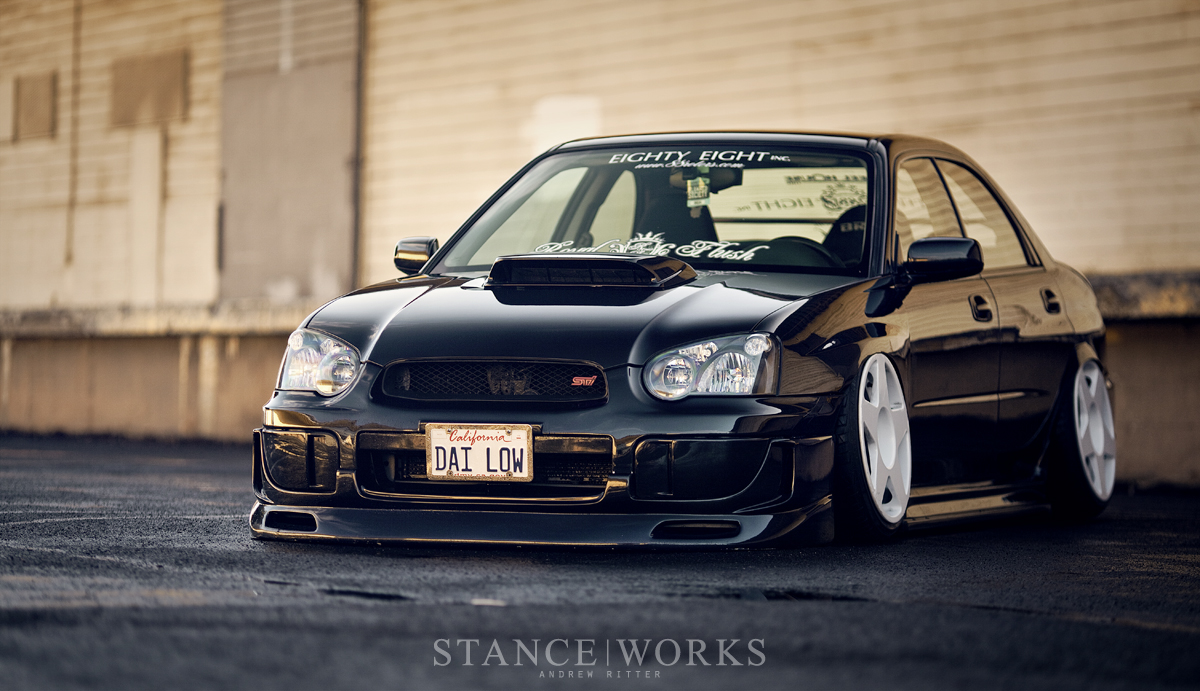 Adam first fell in love with Subarus while playing classic racing games. Their performance and handling prowess struck a chord in him, and with that, a passion began to grow. Once he had one in his hands, he began the spiral into automotive enthusiasm that we’re all familiar with. Soon car meets, Subaru discussions, and forum posts were taking up his free time. Marking a definitive moment in his car ownership, he stumbled across some posts from The Wrong Fitment Crew. All of a sudden, an interest in wheel fitment and slammed cars sat next to his interest in the sports car nature of his STI. You’ll hear people stating that certain makes and models are “meant” to do this or that. Some people have pre-conceived notions that certain cars were intended for one purpose or another, but above all else, a car is meant to bring joy to the owner. Adam knew that the lowered look was the look he wanted, and through tests and trials, he was able to adjust and modify the suspension to get his wheels fitting just right in his eyes. It’s clear that the combination of these parts and styles is indicative of Adam’s personal style and that’s something we applaud here at StanceWorks. 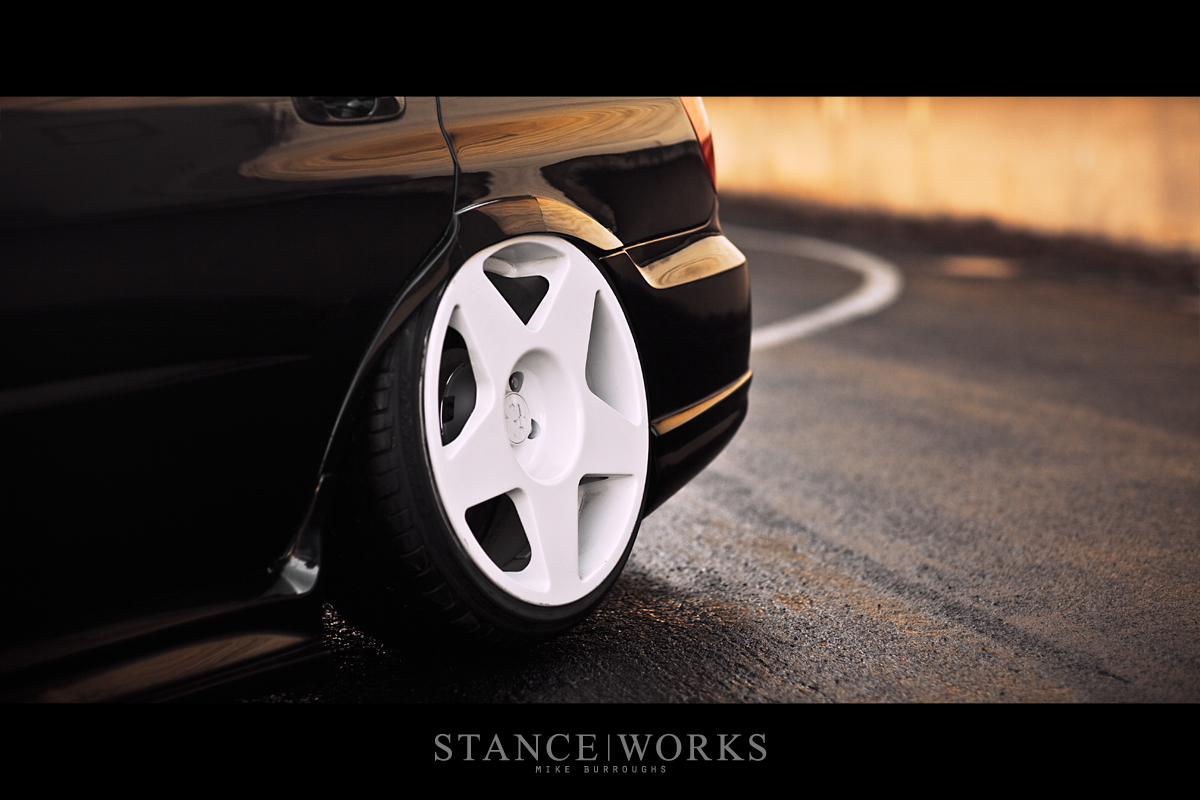 Whether it‘s the balance of Ying and Yang, the ongoing battle between Good and Evil, or the relationship between show cars and sports cars, these opposing forces also act as complimentary aspects that add flavor to life. Adam was able to successfully balance many of these complimentary traits to build a car that matched his diverse tastes. The outcome is a clean example of a car that hits all of the checkboxes for a well-fitted show car while also staying true to the Subaru’s race pedigree with motorsport influenced styling cues.