It's not every day that someone comes along with the intent to change the car scene in its entirety. After all, with the attitude most of the community has these days, that's not too far removed from trying to move mountains. However, the thought of hard work along with the trials and tribulations of building outside the box was not nearly enough to scare away Kyle Ranauro. From the dregs of of the car scene comes one of the cleanest and most unique S-Chassis we've ever seen. 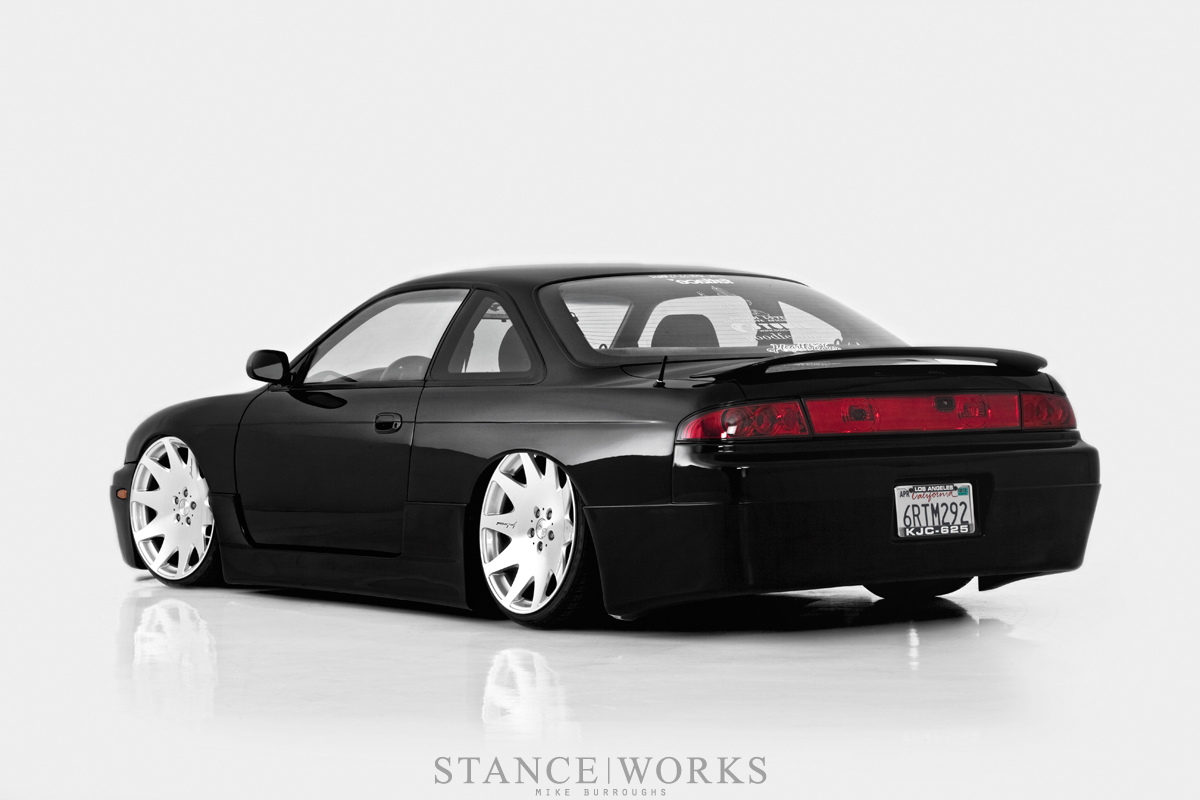 Kyle's S14 is one of the more inspirational cars I've come across in some time. While simple in aesthetics, its execution is anything but. Based on a chassis notorious for crushed quarterpanels and haphazard modifications, Kyle's car stands in a realm of its own, shedding a new light on an otherwise worn out platform. It all began as an idea in Kyle's head. Before he even owned the car, he knew exactly what he wanted to do. Within no time he had the wheels, suspension, body kit, and associated parts sitting in the garage, and it was time for him to find the perfect car. 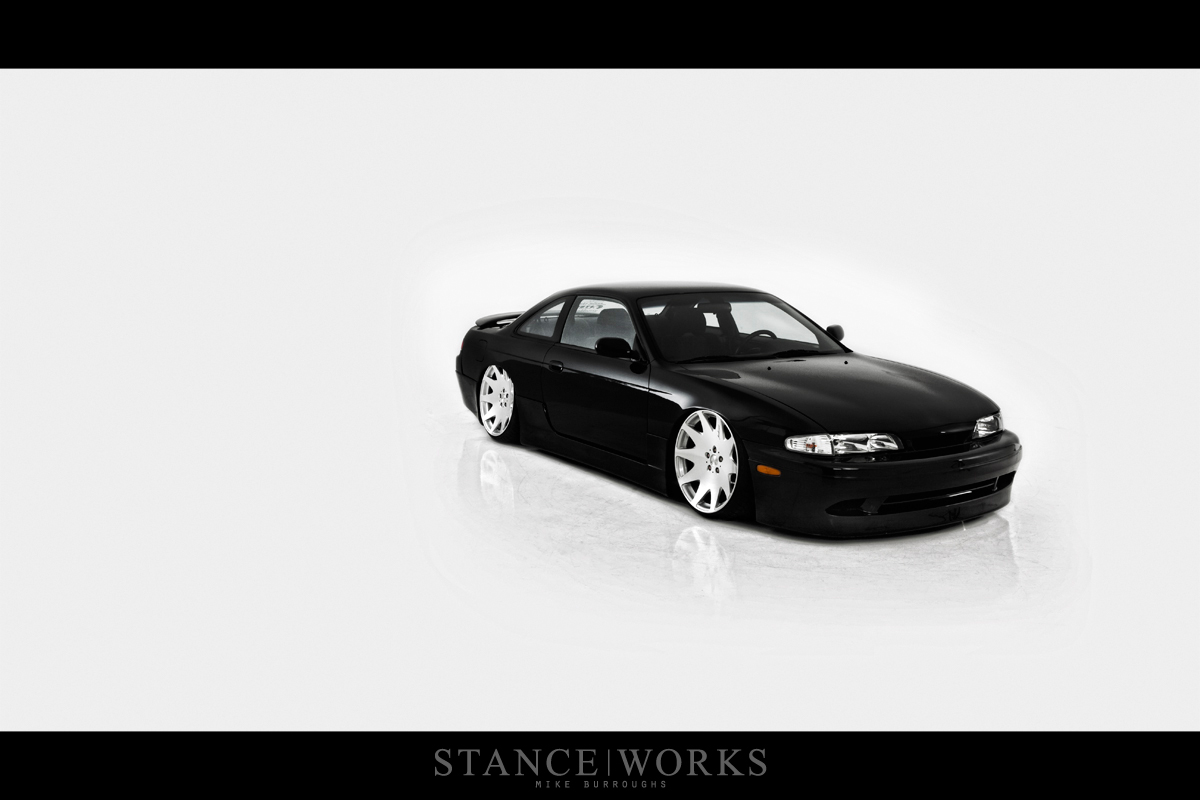 Upon finding this 1996 240sx, he knew it was time to begin what many considered heresy, and it all began with the nose. The war between Zenki and Kouki front ends will likely last longer than than any civil or religious war. The Kouki’s aggressive and angular front always seems to be the nose of choice and is much more prevalent in the aftermarket. Not one to hop on bandwagons, Kyle opted for the much more rounded Zenki front end, a choice that in my eyes fits the curvy lines of the car exponentially better.  It even harks to the R33’s design and aesthetics.

A SuperMade Instant Gentleman aero kit was fitted to the car, transforming it from what many see as a drift missile into a car easily mistakable for something much more extravagant. 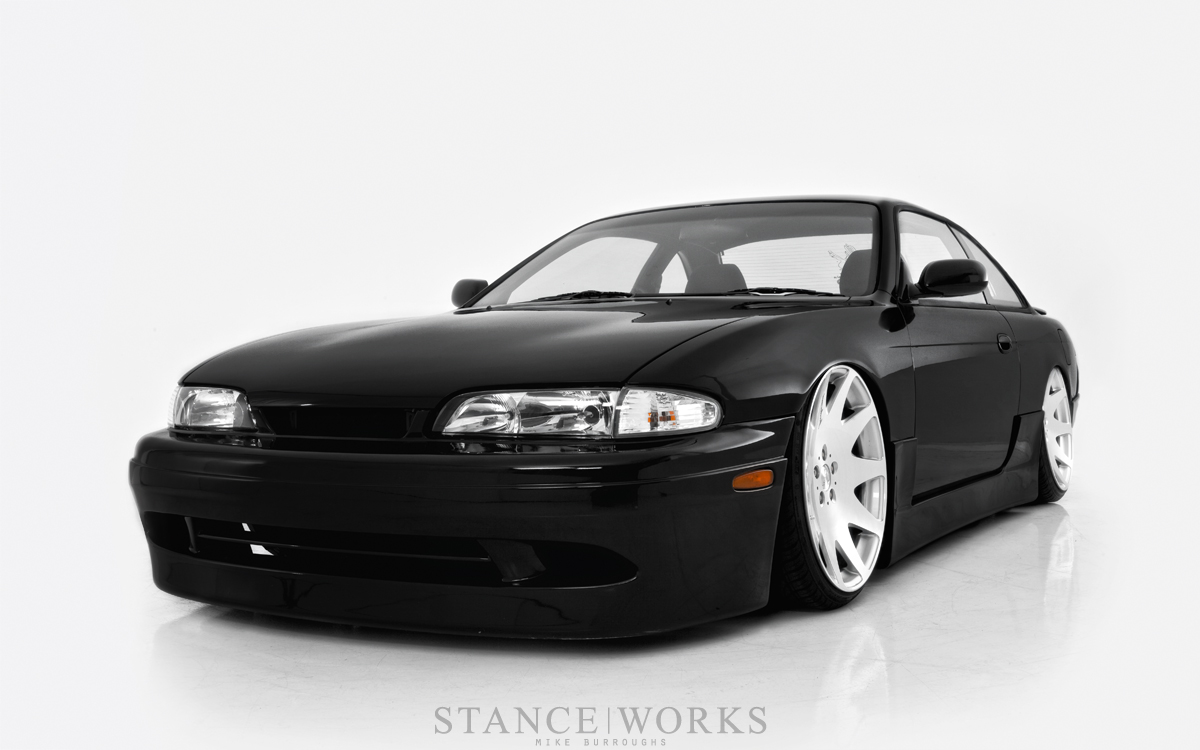 In keeping with the extravagance, Kyle went with massive 20” MRR HR3s. While the crowd that is known for destroying these cars can’t help but complain and sob, Kyle can’t help but smile in knowing that he’s doing the unexpected. The 9.5” et35 wheels are tucked under the fenders by a set of Parts Shop Max coilovers. PSM rear toe links and modified rear hub carriers were required for the tucking out back, as well as a serious fender massage.  The front upper frame rails and front/rear aprons were modified by 3” to allow ample suspension travel as well. 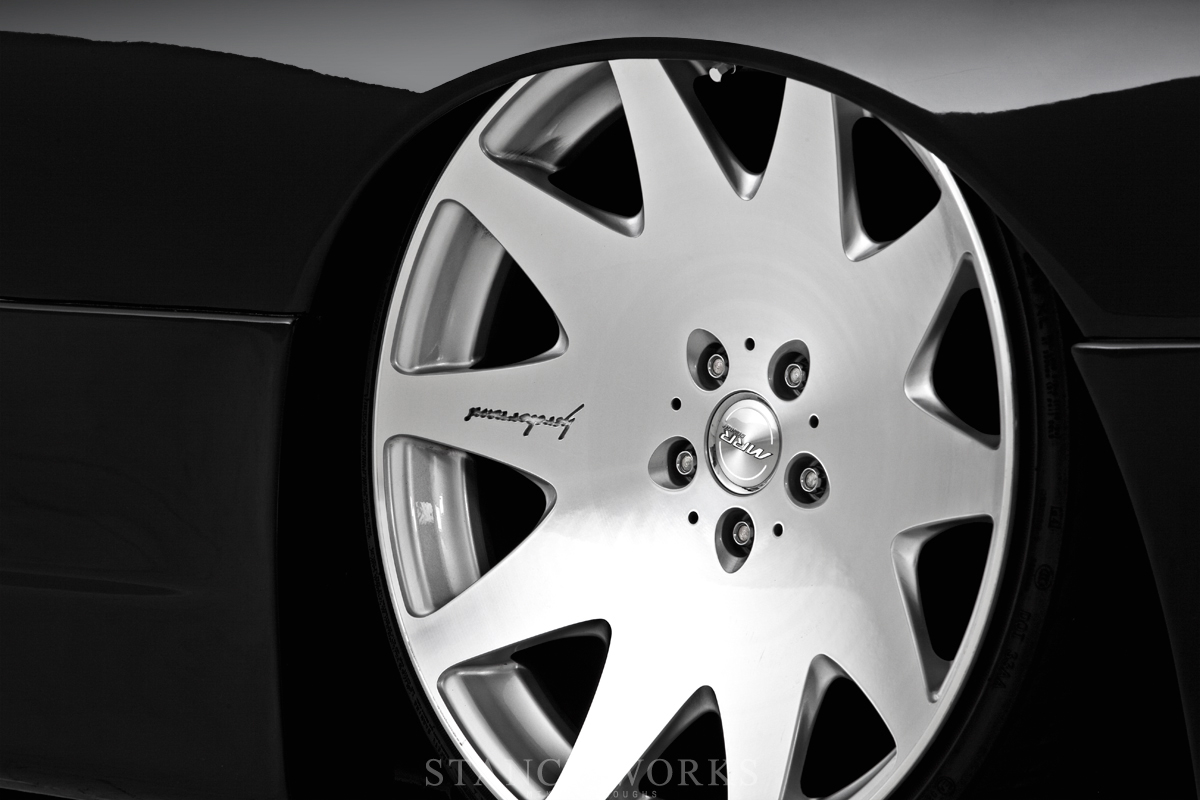 The cleanliness is carried through to the inside of the car, where Kyle’s interior is perfectly stock. That may sound unimpressive, excecpt the mere fact that this S-chassis has an interior is worth some kind of prize or trophy in and of itself. And the fact that the car is an automatic is something Kyle wears with pride. “The driveline is perfect as-is. Why would I change it?”. He abides by the “I don’t need a stick to prove I have one” mentality, knowing full well that the automatic transmission fits perfectly with the theme of the car. 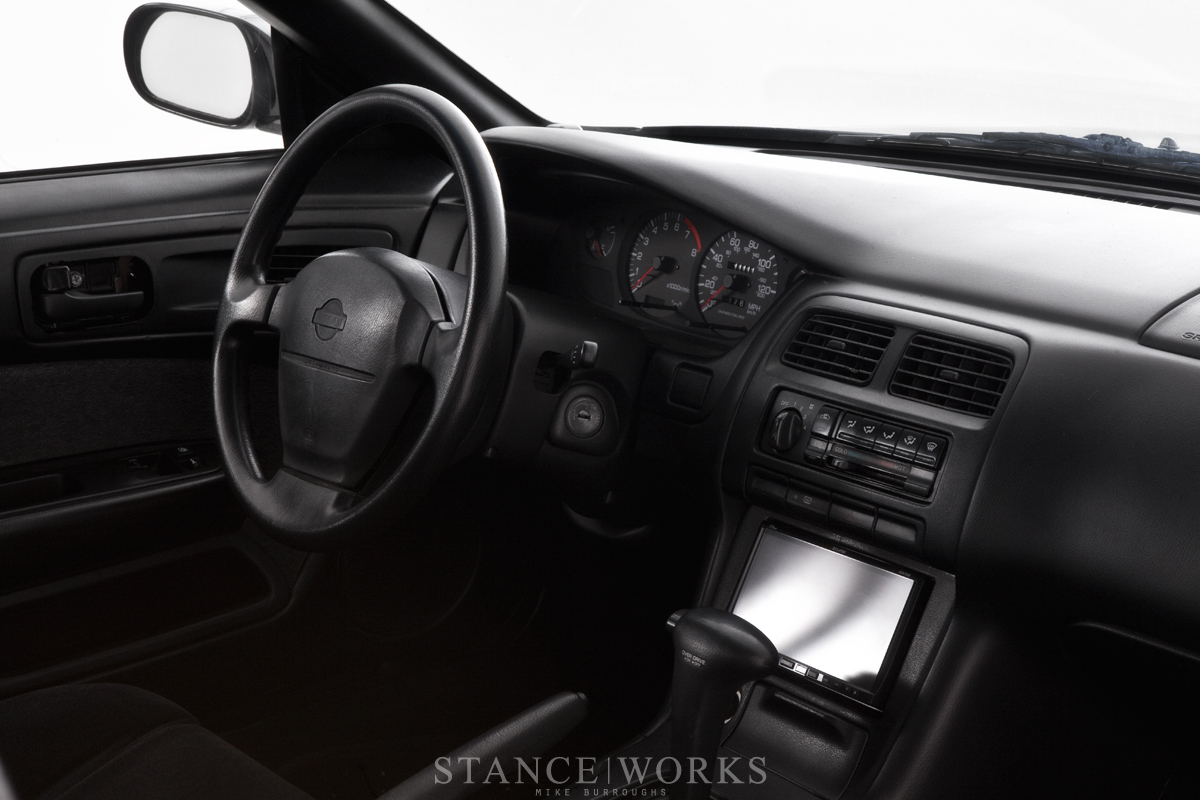 Kyle’s overall goal was to create what he considers a “gentleman’s car”. “The scene feels like its getting rather washy. People are too worried about what others think.” Kyle’s S-chassis rule bending makes a perfect example. “It’s getting further and further from people being individuals and just having fun.”  In today’s scene, it’s far too common for people to let their opinions rule others. After all, there’s no one right way to build a car, and that’s what Kyle is running with.

“I really want to see people out there pushing their own limits of creativity and feeding off of others. I want to put a fire under peoples’ ass to actually do something. No more e-thugging. If you don’t like something, take that hate and put it in tow your own work, not lame comments towards other people’s. Everyone has a different style.” 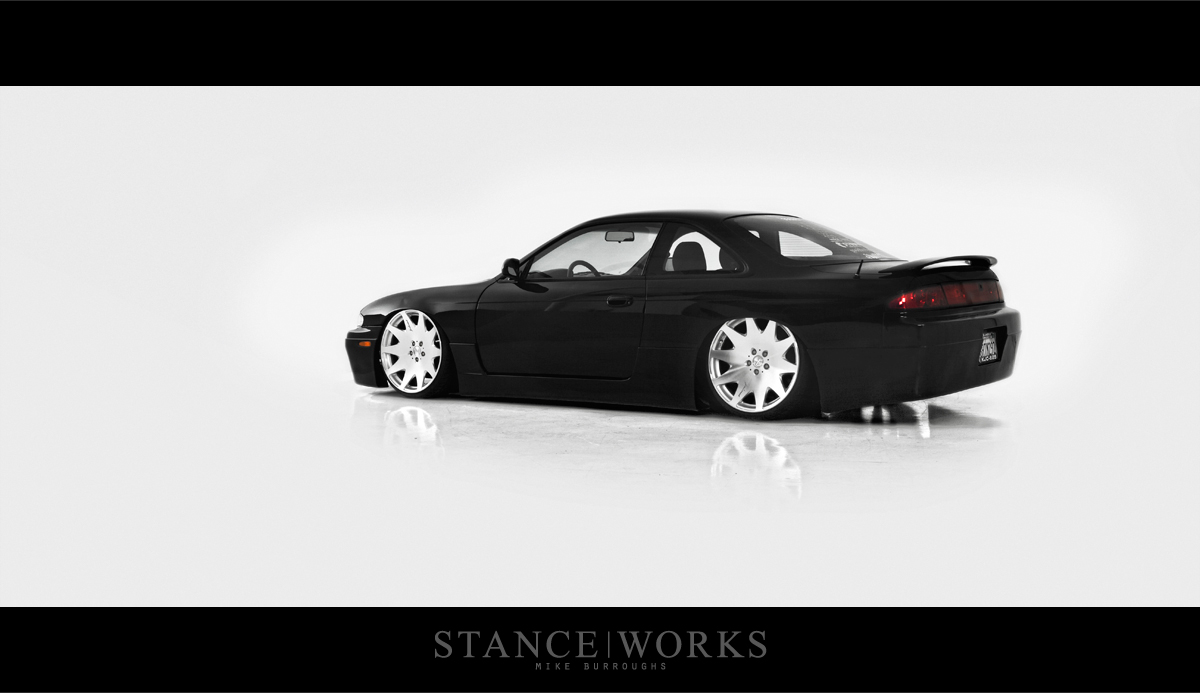 Frankly, it’s that attitude that’ll change the game. In today’s community, with countless people eager to jump at any chance to put others down, it’s the individuals in it for the right reasons that keep everything moving forward. For us, it seems as though Kyle has it all figured out.  Dabbling in controversy isn’t a way to make a name for himself; it’s a way to get others to branch out and express their own individuality. As a car we know will go over so well for so many and so poorly for others, we couldn't be more ecstatic to say this is the kind of car we're all about. 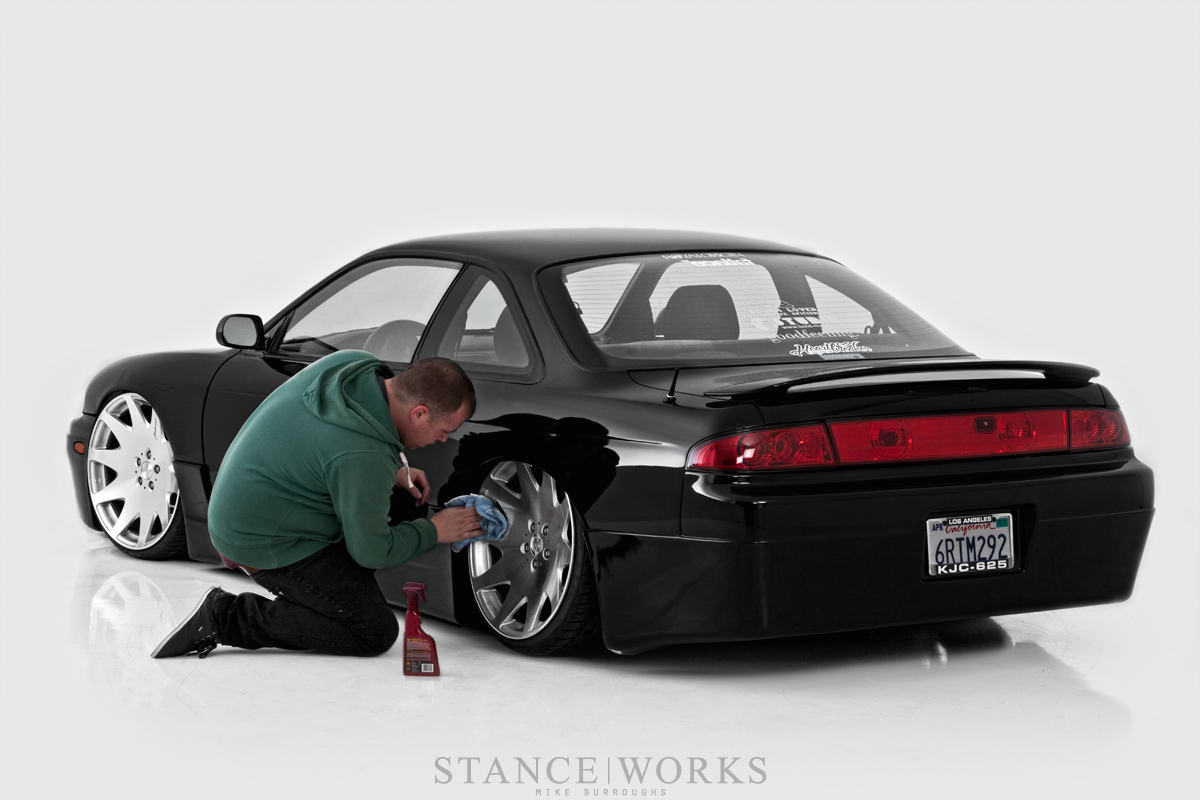 A very special thanks to Icon Media in L.A.  for the use of their studio and Grinder TV for the video shoot!