A show placed in a Bavarian themed village nestled away in the rural town of Helen, Georgia is one of the most unique car events held in the United States. Modeled after it's "mother event" held on Worthersee Lake in Southern Austria, SoWo aims to take you back in time to the hay-day of the cars in attendance. 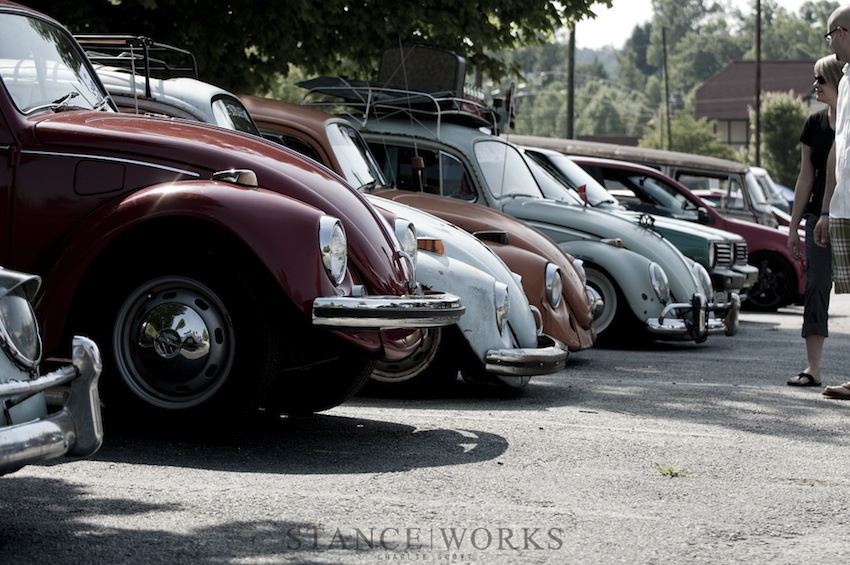 This is all well and good, but to me, this past weekend in that old Bavarian-themed town brought about a different atmosphere. The show wasn't about the cars and their German heritage, instead it proved to be about their current owners and people they befriended to make the show possible . Whether it was the following one man and his rusty BMW that brought some these enthusiasts to Georgia, or you and your buddies rolling fenders in a Wendy's parking lot to fit a set of wheels for the show; every little thing culminated into a weekend of friends bonding and memories made.

Before heading down South from the tri-state, Mike Burroughs welcomed me and a few others that were about to make the grueling 14 hour journey from the North East to his own home in Tennessee. Invited them to see, in person, a particular project he had been working on since the infamous fire that was thought to have taken Rusty to the grave. The progress was astounding and we will all have to wait and see what else could be up Mike's sleeve. 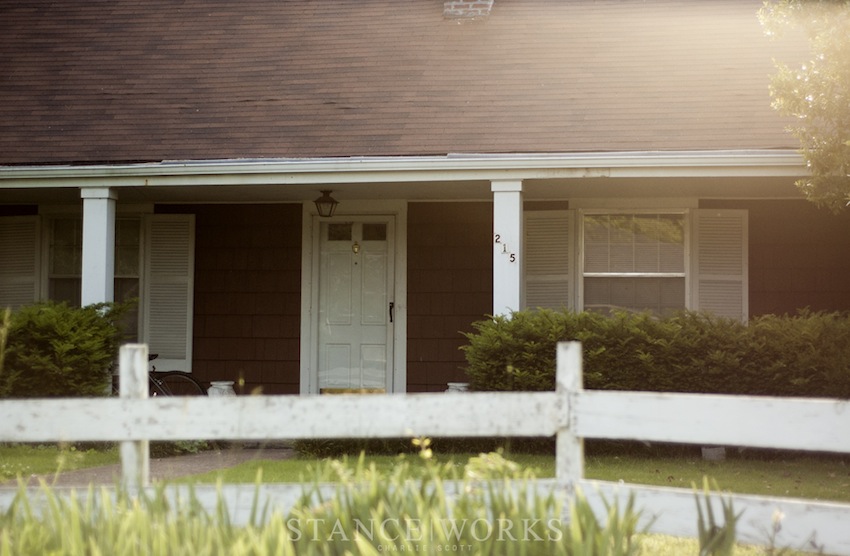 After seeing Mike's pride and joy, his "best friend", we began the last four hours of our trip to SoWo. The sun set behind us as we headed east and before we knew it we were ripping through the mountain twisties descending into Helen. 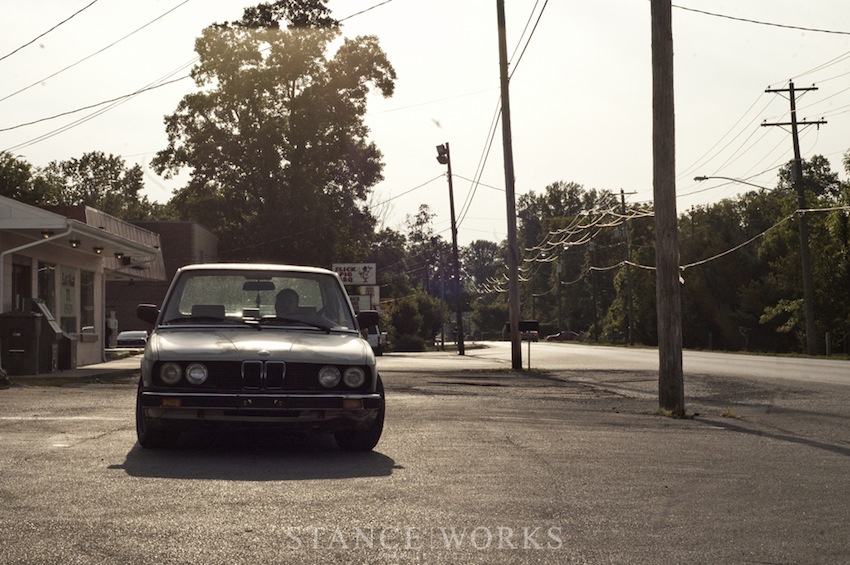 Pulling into the Helendorf hotel around midnight that night set off the weekend I was expecting. Immediately after getting out of the car, I was introduced to Jeremy Whittle and Ryan Grissom; both of whom I had talked to a while before, during my bimmerforum days, and had recently made contact with so we could be introduced at the show. Meeting these two in person for the first time was a somewhat surreal experience, but I knew as soon as we shook hands it was the beginning to another set of long term friendships. 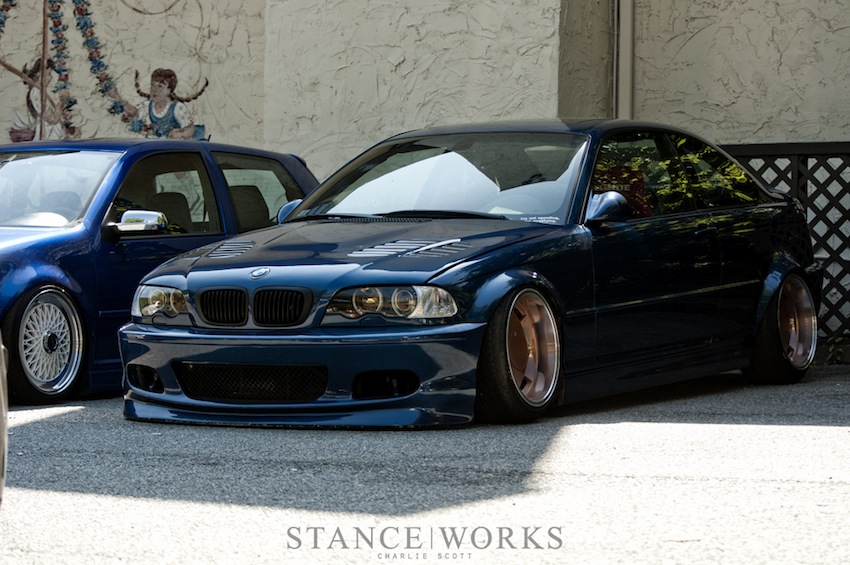 After the parties at the Helendorf either died down or were broken up by the police, the StanceWorks crew made their way over to Waffle House for meal before hitting the hay. Thisbrings us to Saturday, show day. I'd love to say that I saw every car at the show, but I would be lying if I did. In all honesty, I don't think I spent more than an hour browsing the main strip snapping some of the photos you see here. 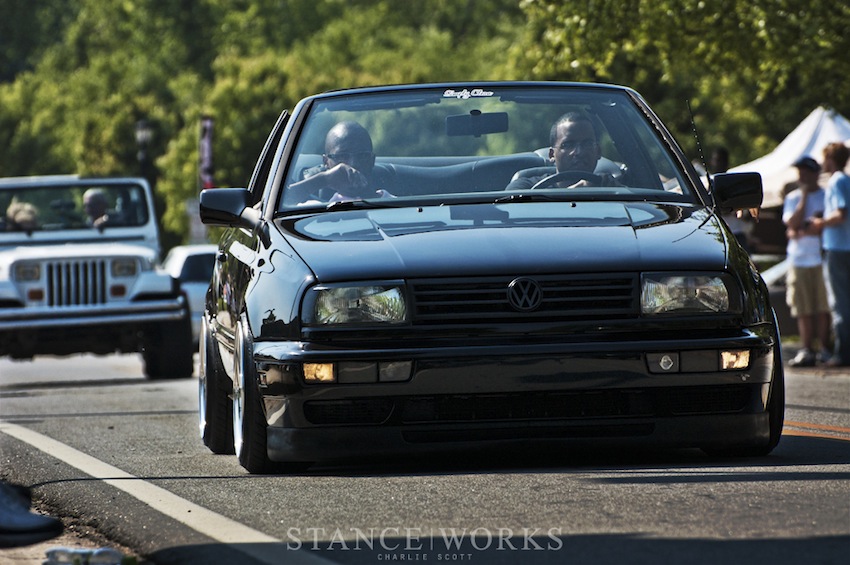 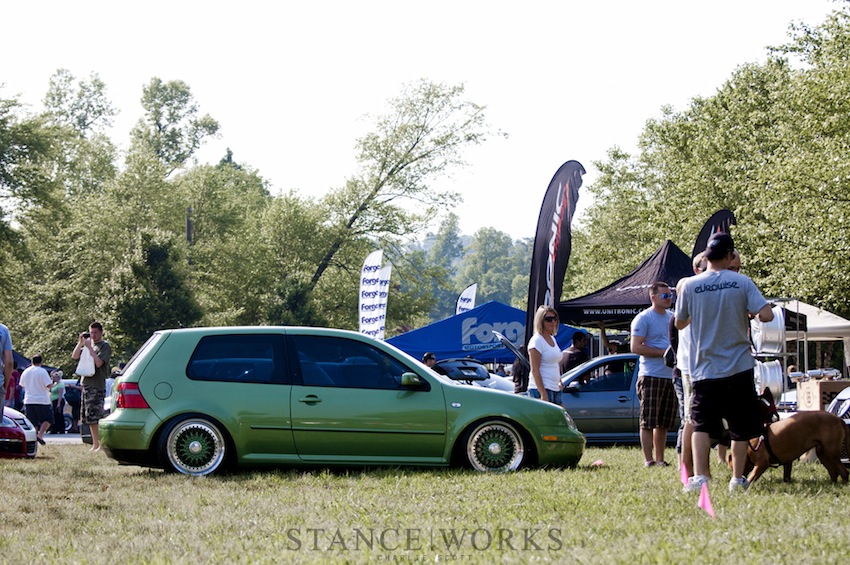 It wasn't about the cars for me. Sure there were some unique vehicles that you could tell had a lot of time and work into, but on that day I chose to sit outside in the hot sun helping a friend fit a set of wheels on his car for the show. Over three hours were spent in that lot bs'ing with everyone else while we rolled fender lips with a rubber mallet someone purchased from the hardware store down the street. We talked about what everyone's plans were for their cars, even about some unrealistic hopes and dreams. Mainly though, we conversed over how freakin' awesome it was that everyone we once only recognized through screen names, wound up in that lot. 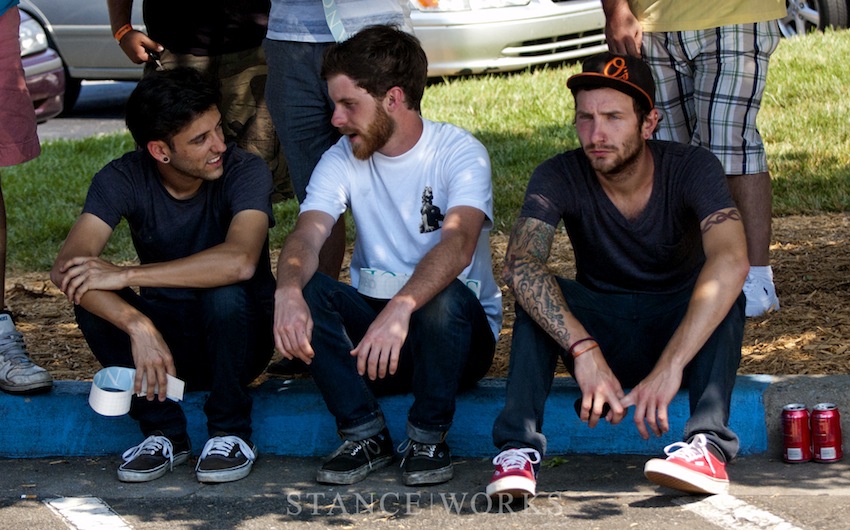 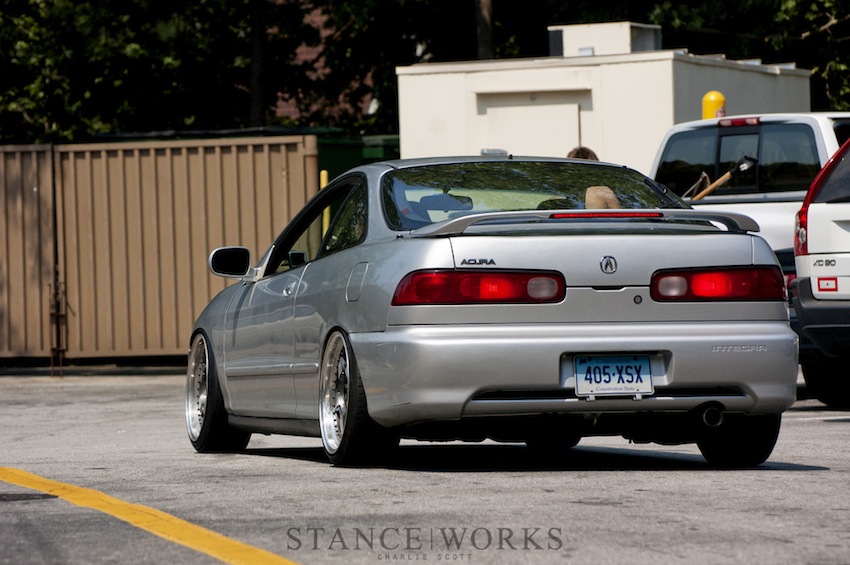 From that make-shift garage, we made our way down the street to see what was going on as the show wound down. JJ and the AWOL team were on the sidewalk of the main road filming cars as spectators encouraged each one to do a burnout. 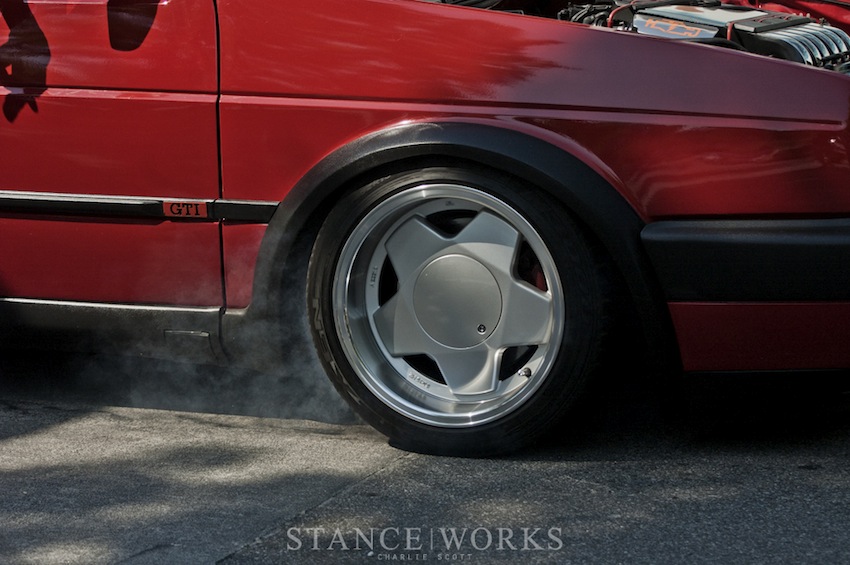 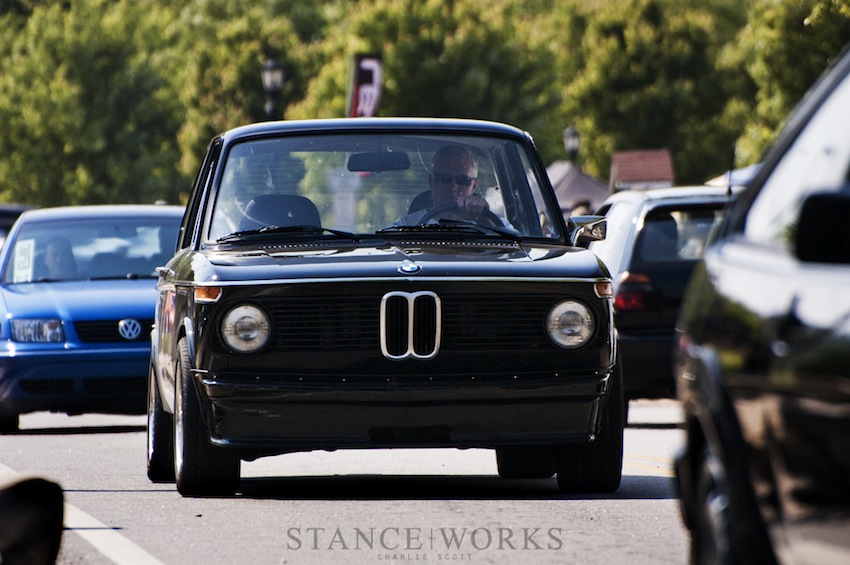 We then all relaxed under the shade near the DUBKORPS booth making small talk with Brian Henderson of Rotiform. The show was coming to a close, but that didn't matter all that much to us at all. Talking and thinking of more things to do brought us to the idea of renting the $5 tubes to float down the river that this little town in Georgia was built around. Let me tell you, that $5 was the best $5 anyone who tagged along spent in recent memory. 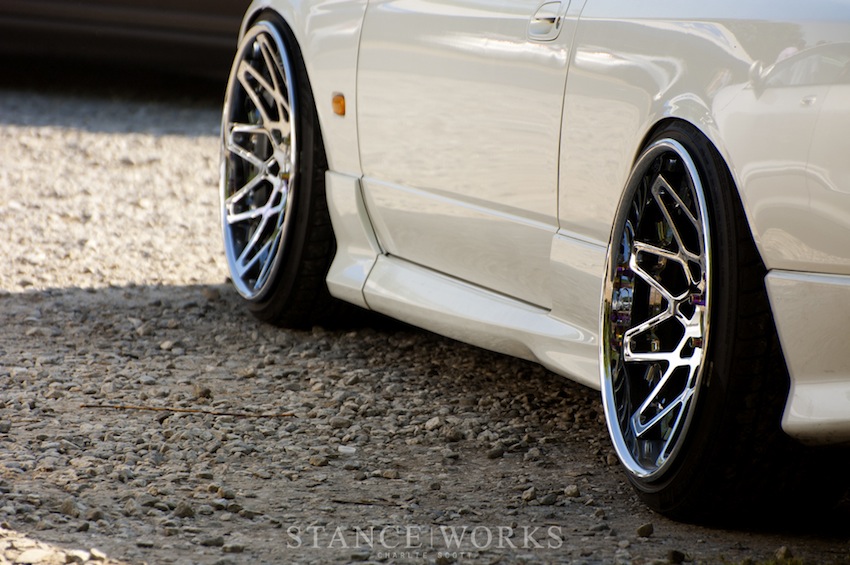 I won't go into too much detail about the nightlife at the show, because frankly, you had to be their to experience it. I will say, making connections and having a few with all of my buddies crammed into that Helendorf quad Saturday night topped off an amazing weekend. 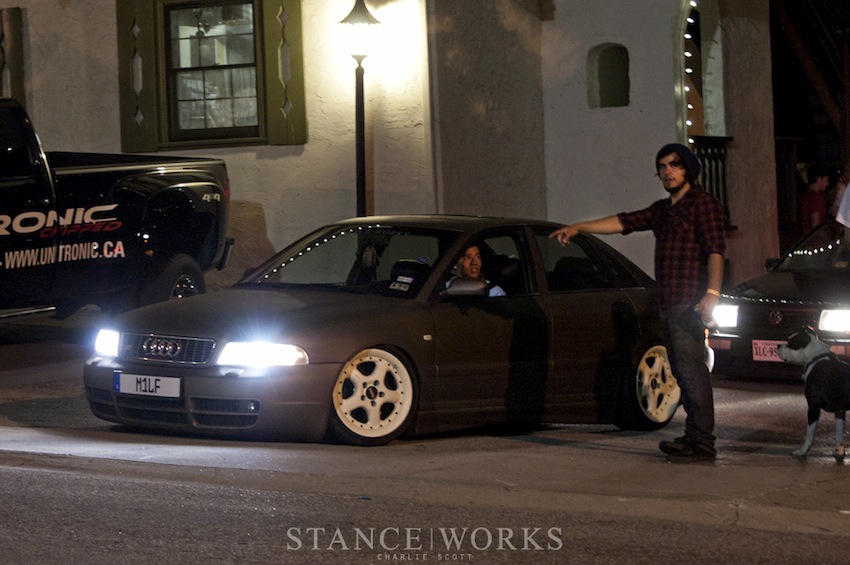 All-in-all I think the entire story of that weekend can best be summarized with this simple quote from Jeremy:
"Don't get me wrong, I like to see well done cars sitting proper at shows like these just as much as the next guy, but at the end of the day that's simply not what it is about."