“What the Hell is Fluid MotorUnion?”

“What the Hell is Fluid MotorUnion?”

We here at StanceWorks have been friends with the crew at Fluid MotorUnion for quite some time... They've been here to support us and push us to do what we do best... but it occurred to us that many of you have no idea who they really are. We had Andrew Krok at Fluid give us a full write-up on the shop. We hope you guys enjoy. It's easily one of the better write-ups I've had the chance to post here. Give it a good read.

“I do not know anyone who has gotten to the top without hard work.  That is the recipe.  It will not always get you to the top, but it will get you pretty near.” – Margaret Thatcher

Admittedly, I entered Fluid MotorUnion pretty late in the game.  Having only been here since August of 2010, I was never able to witness the sheer amount of effort that brought Fluid MotorUnion to where it is today.  By the time I came in for my interview, OJ was already jetting to and from Doha, the M3 was rocking the Dymag carbon-kevlar wheels and Luci already had his own section of the website. 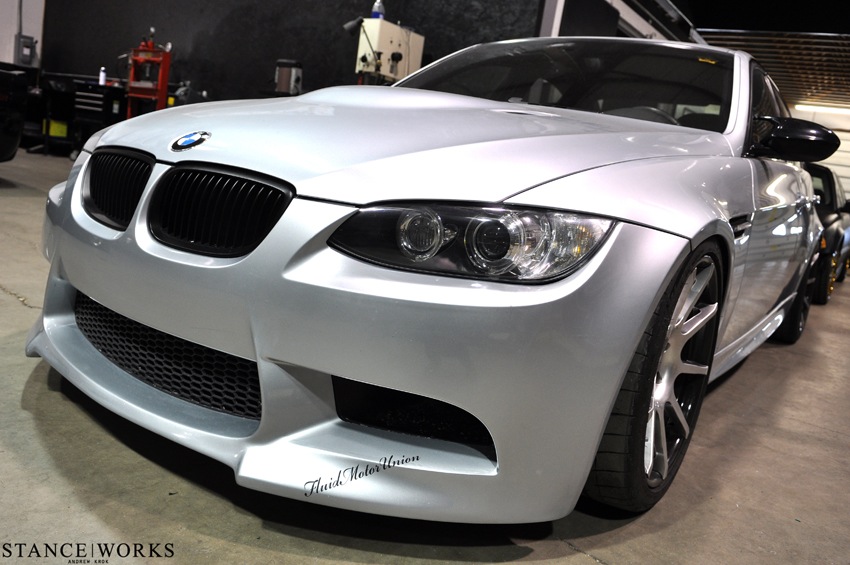 Essentially, I was like an in-law.  Through a series of cascading events, I entered the Fluid family well into its stride.  At first glance, it might seem tough to enter a family that’s already been established for so long, with the newbie (me) clamoring to figure out a way to enter the family that’s already been through so much.  But then I thought about it and realized it gave me a unique viewpoint.  I was able to witness the inner workings of a family and see just what makes it operate, what started it and keeps it going from day to day.

The answer is simple – hard work and dedication.  I know it sounds like a farcical answer, something that everybody espouses, something you might see on a Hallmark card or a car commercial.  But this is something entirely different.  This is pure, unadulterated psychosis; the mind becomes unable to focus on anything else, all thoughts are driven to this single zenith, and it becomes all-consuming.

But Fluid embraces the madness.  We live inside of it, and we have learned to use it to our advantage.

The easiest way to climb a ladder is with your hands.  OJ, the man behind Fluid, knew this from a somewhat early age.  While his budding love for all things automobile began around 16, it never came into the forefront until college came calling.  While OJ was attending the University of Illinois at Chicago for a business degree, he realized that he could merge his hobbies and his professional goals into a single, solidified entity.  This could be done, but it wouldn’t be easy. 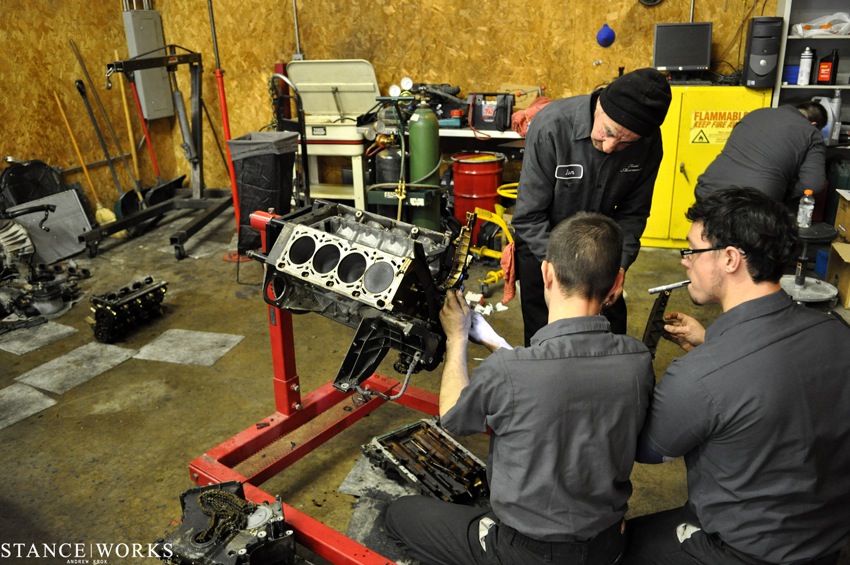 Rumor has it that Marilynn, OJ’s mother, came home one day to find a radiator disassembled and soaking in the bathtub.  Instead of murdering her son, and most likely intoxicated from the lovely fish smell of coolant, the two decided that OJ’s next step should be to enroll in automotive technical school.  This means that, technically, a radiator in a bathtub started Fluid MotorUnion, but that only makes for a marginally interesting (and incredibly short) story.  We’ll stick with OJ for the remainder of this, although if anybody knows where that radiator ended up, we’d like to have a word with it.

Imagine a blank piece of paper.  That piece of paper is the list of exciting things to do in Wyoming.  After a long day of school at Wyoming Technical Institute (WyoTech), OJ needed to decompress.  Instead of getting wasted (as that’s totally the cool thing to do in college), he chose to let his hobby become his dominating mindset.  With a few friends, OJ started working on cars outside of Wyotech.  That’s when the madness began to take hold.

After graduation, it was do-or-die time.  OJ knew that he wanted to open a business, and working on cars at night seemed as if it could grow into something serious, a full-time job that would take an obscene amount of time and effort to make grow.  On his way back to Chicago, he propositioned some of his night-garage buddies to jump onto the bandwagon of private entrepreneurship.  The only one crazy enough to do it?  Craig Hegland, whose welding and beard-growing skills would eventually become the second piece in a four-piece puzzle. 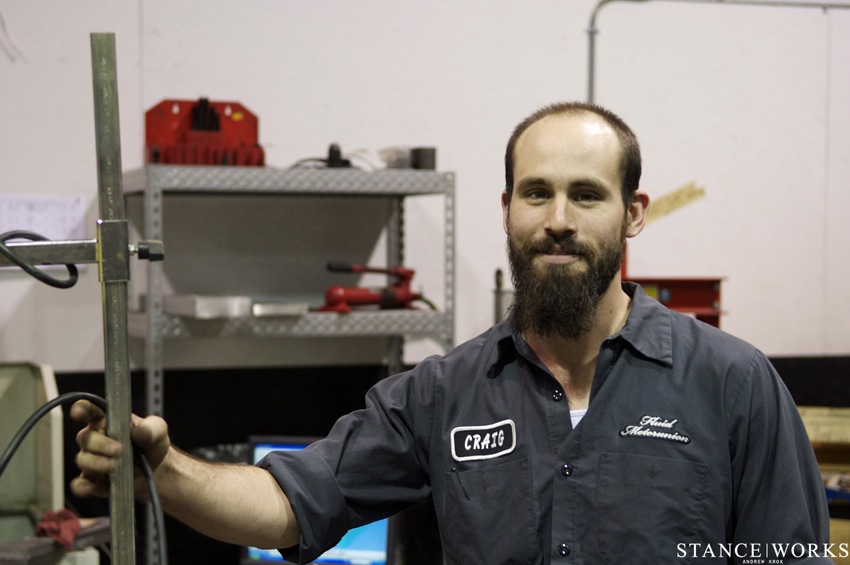 Cue even more hard work upon arriving in Chicago.  OJ and Craig continued their automotive education in the field of specialization (OJ went with BMW, Craig went with Audi).  After landing serious jobs at big-name dealerships in Chicago, OJ and Craig would leave their day jobs and head home, where they continued to do work in the name of Fluid MotorUnion, initially working on their own cars and the cars of family members.  The beans were put in the pot, and the stalk was just beginning to poke out from underneath the topsoil.

Good work, just like hard work, does not go unnoticed.  Not only were OJ and Craig capable of holding down two jobs that they both took very seriously, but they also kept working harder and harder.  Eventually, Fluid started taking in more than just the familial vehicles, and another small business angel gained its wings.  The last two pieces of the puzzle were ready to be set in place, and Fluid was about to explode. 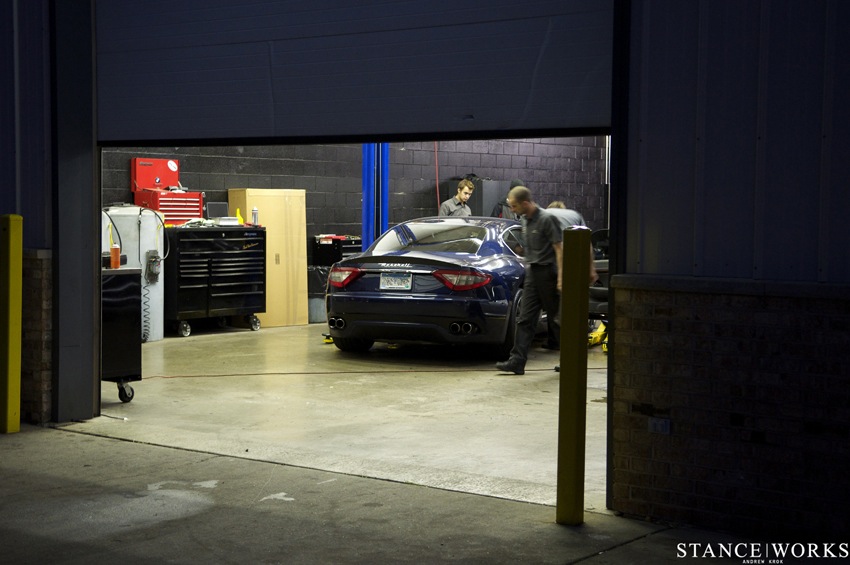 With the phone calls and customers arriving in higher quantities, OJ and Craig were stretched thin; after all, running an entire business down to the books was difficult, not to mention doing this all at night after a full day’s work.  That’s when they decided to call in reinforcements, the last two pieces to the puzzle.  The first was Marilynn; not only was she excellent at dealing with pretty much any situation (refer to the radiator), but she had already helmed successful businesses in the past, and knew what it took to succeed.  Along with Marilynn, Craig and OJ hired their first full-time employee, a man that would later become the Romanian Superman himself, Luci.  He covered the service department, while Craig and OJ would return at night for diagnostics and fabrication work.  After their inaugural car show appearance (strangely enough, at Hot Import Nights; oh, the follies of youth), the Fearsome Foursome knew that Fluid had the capability for great skyward growth.  And growth was exactly what they experienced. 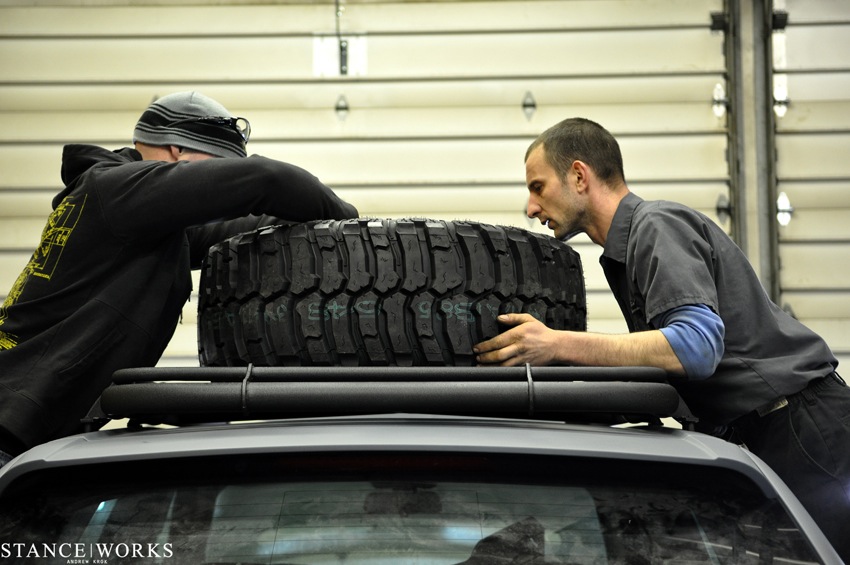 The snowball effect takes place everywhere, even in a young business.  After HIN, business kept growing, so Fluid packed up their bags and moved to a bigger, newer shop in Plainfield, IL.  Having the necessary resources at this point, both Craig and OJ eventually left their day jobs and Fluid MotorUnion became their zenith, their all-encompassing desire to succeed.  More employees joined the ranks, and exposure to the enthusiast scene was becoming a primary focus.

Madness, as mentioned at the beginning of the article, tends to manifest itself in obvious ways.  The madness of Jackson Pollock is seen quite easily in his artwork, various hack-and-slash methods of applying paint give the artwork a visceral feel, like you’ve crawled into the brain of a man who cannot think of anything but the desire to create.  This is equally apparent in the first fully-fledged Fluid project car, Gold Wheels. 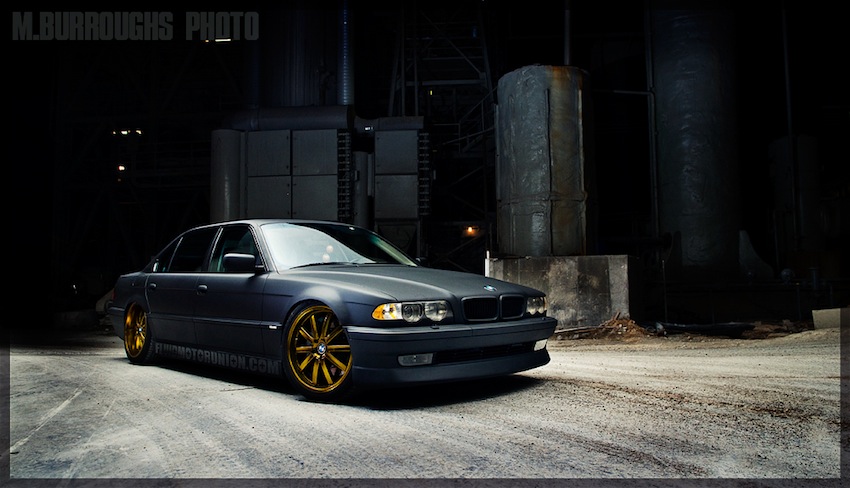 Creating a project car usually takes a good amount of time spent on thought, coming up with various ideas and figuring out which one is best.  This can take some time, one might assume.  Not when you’ve got deadlines, though.  Fluid MotorUnion was heading to MFest (a big BMW festival in Vegas) in 18 days, and Gold Wheels needed a major revamping.  In that small window, Fluid’s crew managed to add a new Rotora big brake kit, drop the stock engine and replace it with one from an E39 M5, fabricate a new stainless steel exhaust system, create an asphalt-licking suspension setup and repaint the entire car a matte black.  Their first test drive was mere hours before leaving for Nevada, with the paint still drying.

“I’m a great believer in luck and I find the harder I work, the more I have of it.” – Thomas Jefferson 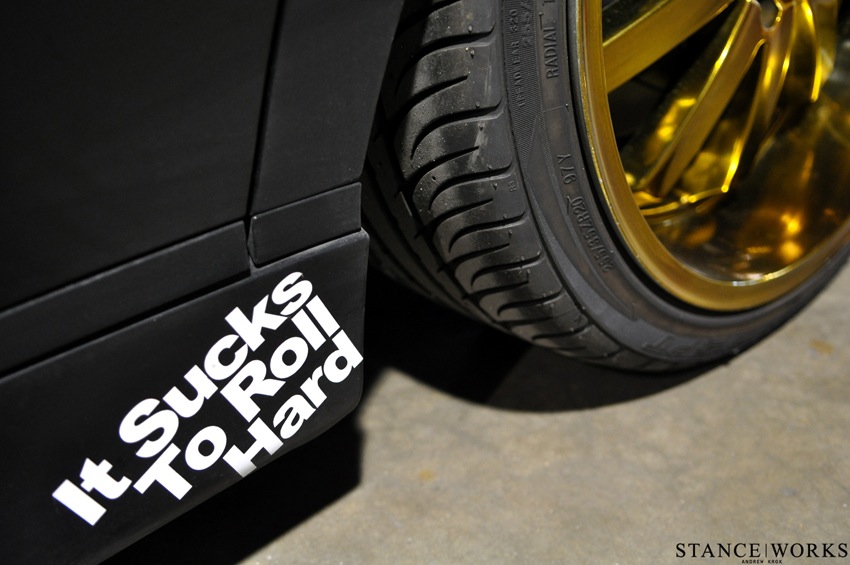 Fluid had survived the trip to MFest, and Gold Wheels took the place by storm.   When the shiny gold Ark of the Covenant arrived in Vegas, the scene had to open it up and determine what this beast was, who conceived it and even allowed it to exist in the first place.  Those of us who have seen Raiders of the Lost Ark know the next part; people’s faces began to melt.  And thus Fluid emerged on the scene with a bang, not a whimper.

Since then, FMU’s motto of “It Sucks to Roll Hard” has been adopted faster than a third-world orphan who smiled at Angelina Jolie.  Fluid’s project cars continue to advance our own personal design aesthetic, in turn helping re-shape the scene on a daily basis.  Just like a living organism, the project cars continue to change as time goes on and as personal tastes change.  Fluid’s goal, however, will not change.  Through thick and thin, OJ and his team have put their hearts and souls into what they do, working from early in the morning until well after the sun beats a hasty retreat over the horizon.  The dedication, the madness, is what drives us.  It’s a steadfast promise to continue to change the scene as quickly as the scene itself changes.  It’s a knowledge that whatever car enters these doors will leave even better than when it came in (like the Gallardo).

We’ve since changed shop locations one more time, but we’re not getting comfortable.  To step into routine is to expect routine, and stagnation is not a desired outcome in this business.  Each day brings with it new ideas, new methods of achieving our hopes, and new problems to overcome.  We will not stop until we’ve reached the top, but who’s to stop us there?  We’ll just build an even taller top and continue to climb. 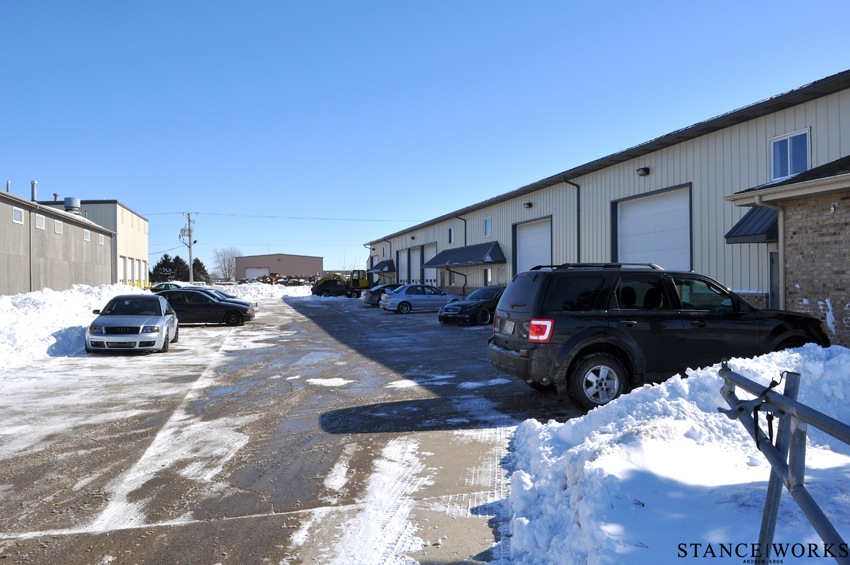 Every single person in this shop contributes to the growth of Fluid in a different way, but the one thing that remains constant is a fervent love for automobiles and the knowledge that we’re working our asses off to reach something incredible.  Sacrifices have been made, but in order to serve a feast, you’ll have to be in the kitchen for a while. 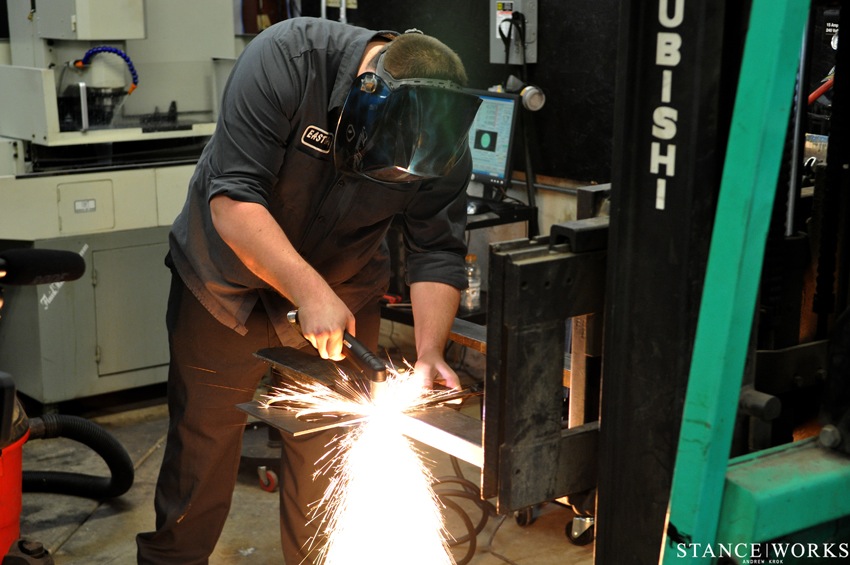 Keep your eyes open in the coming weeks and months for our two newest manifestations of madness, Marilynn’s M45 and Dick Cook’s X5.  Everybody’s support is what has truly brought us to this level, and without you, we’d still be fantasizing about our dreams, instead of living them. 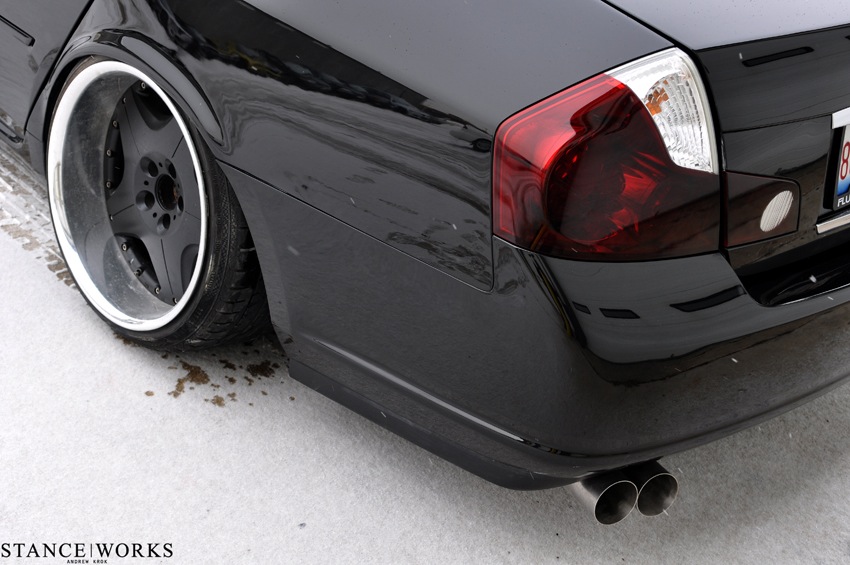 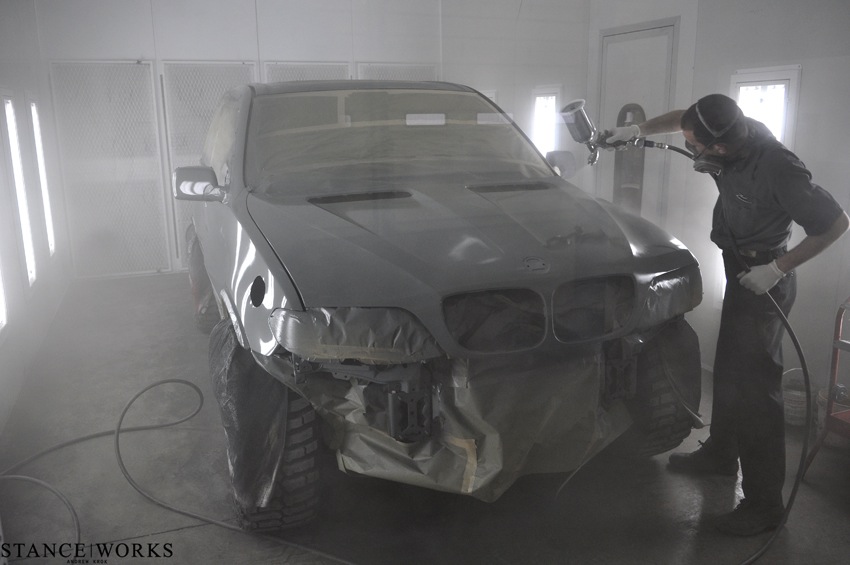 Stay tuned, Planet Earth.  The best is yet to come.