Photography contributed by Charlie Scott.  No, it's not 2020's "StanceWorks Off Road" annual excursion, although we wished it could have been. There's been a number of curve balls this year, which comes as no surprise to anyone at this point. Between the June birth of Justin and Rose's daughter, Charlie's race schedule, COVID restrictions, and everything in between, it almost appeared as though 2020 might go by without so much as a major camping trip at all. To be clear, it still might; however, we made the best of the cards we were dealt, and this last weekend, we made a simple three-day escape to the San Bernardino National Forest, just outside of Big Bear, California. Although far from an "excursion" and arguably not much of a trip at all, considering the distance to home, it came as a much needed break from the dumpster fire that is 2020 as a whole. 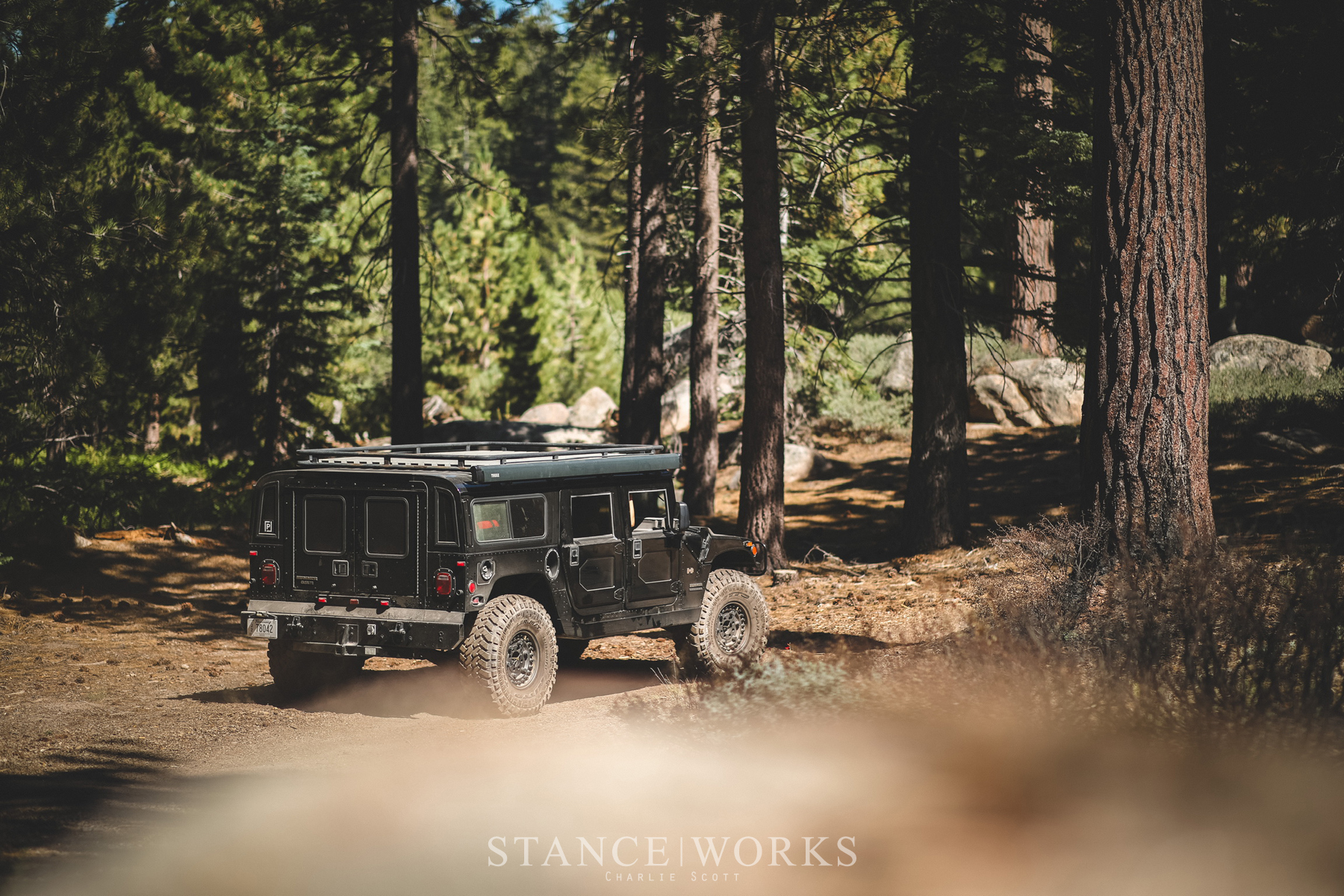 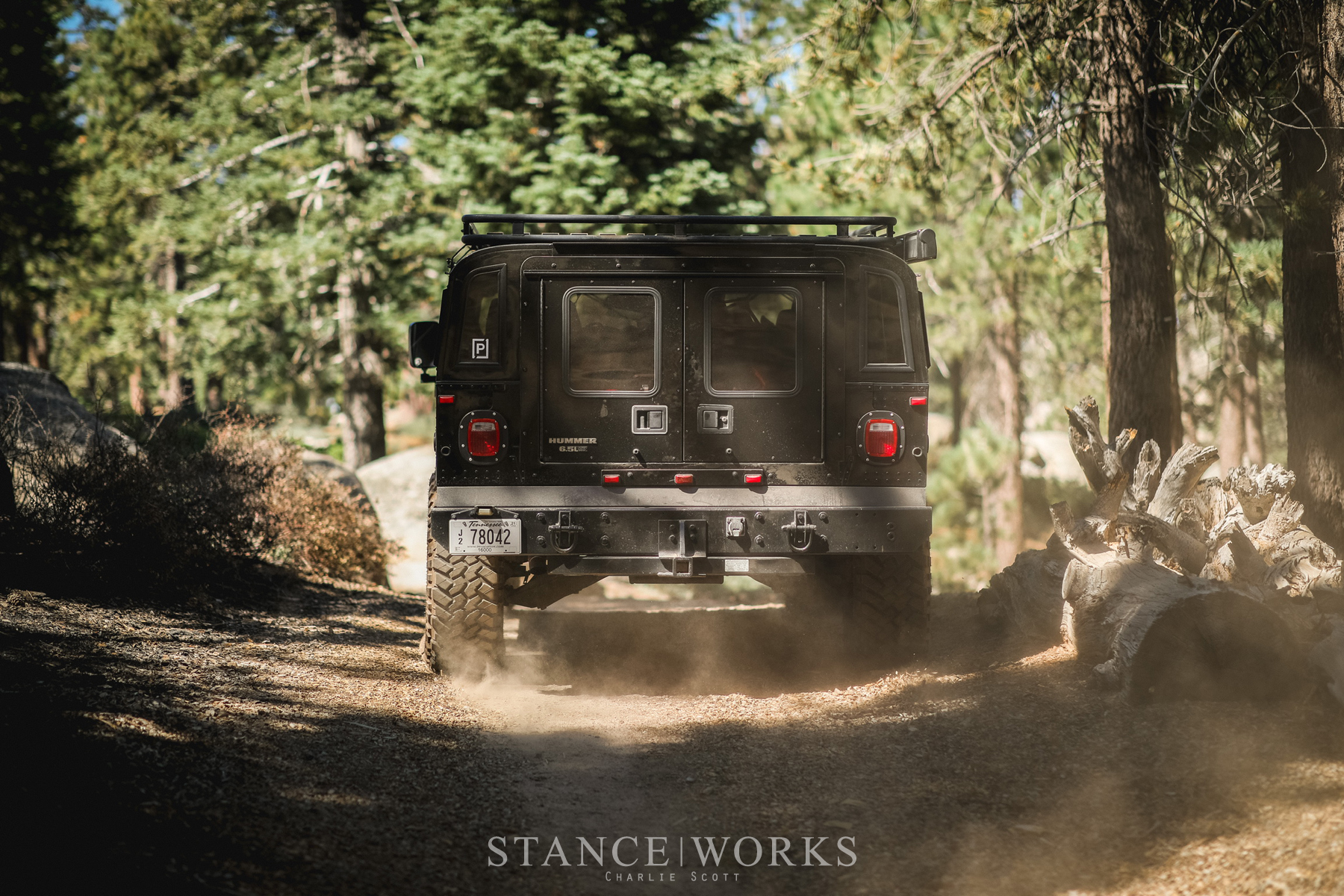 Andrew may have missed 2019's Colorado trip, but he was present in spirit, and with his relatively recent acquisition of his HDJ81 Land Cruiser, he's been itching for any opportunity to camp. When Charlie Scott, whom makes the drive for our annual trip each year from Connecticut, let us know he'd be in Southern California for a few short days, we put together some rapid plans for a weekend escape. Charlie boarded his flight with his camp gear in tow, and before we knew it, we were mulling over exactly how to spend our 3-day weekend. 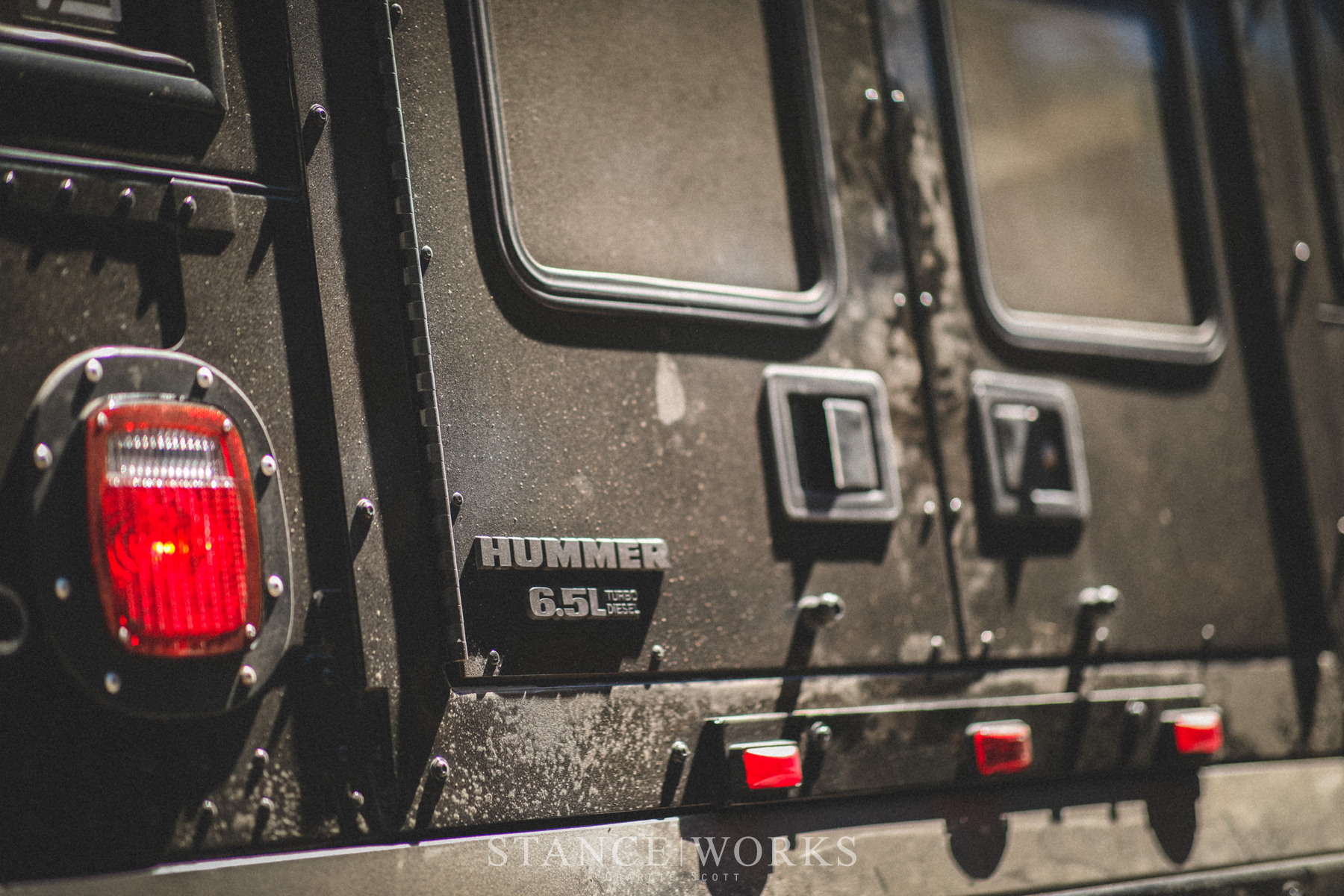 With a lack of luck, a heat wave swept across Southern California, pushing temps as high as 105 in some areas, which crossed the Alabama Hills from our list in a hurry. We sought out altitude, considering the likes of Mammoth, the Sequoia National Forest, and the Los Padres National Forest; however, a few calls and a bit of speculation lead to hesitance. While it's great that more and more folks are enjoying the outdoors, COVID-19 has lead to swarms of folks congregating at popular sites, seeing as there's not a whole lot else to do. No, we're no more innocent, also seeking a break from the day-to-day by finding solace under the sun; however, we were positive we didn't want to be around others. After some debate, it seemed it was wise to check out a few spots around Big Bear. With high temps in just the mid 80s, and with lots of tree coverage, we set out to see what we could find. 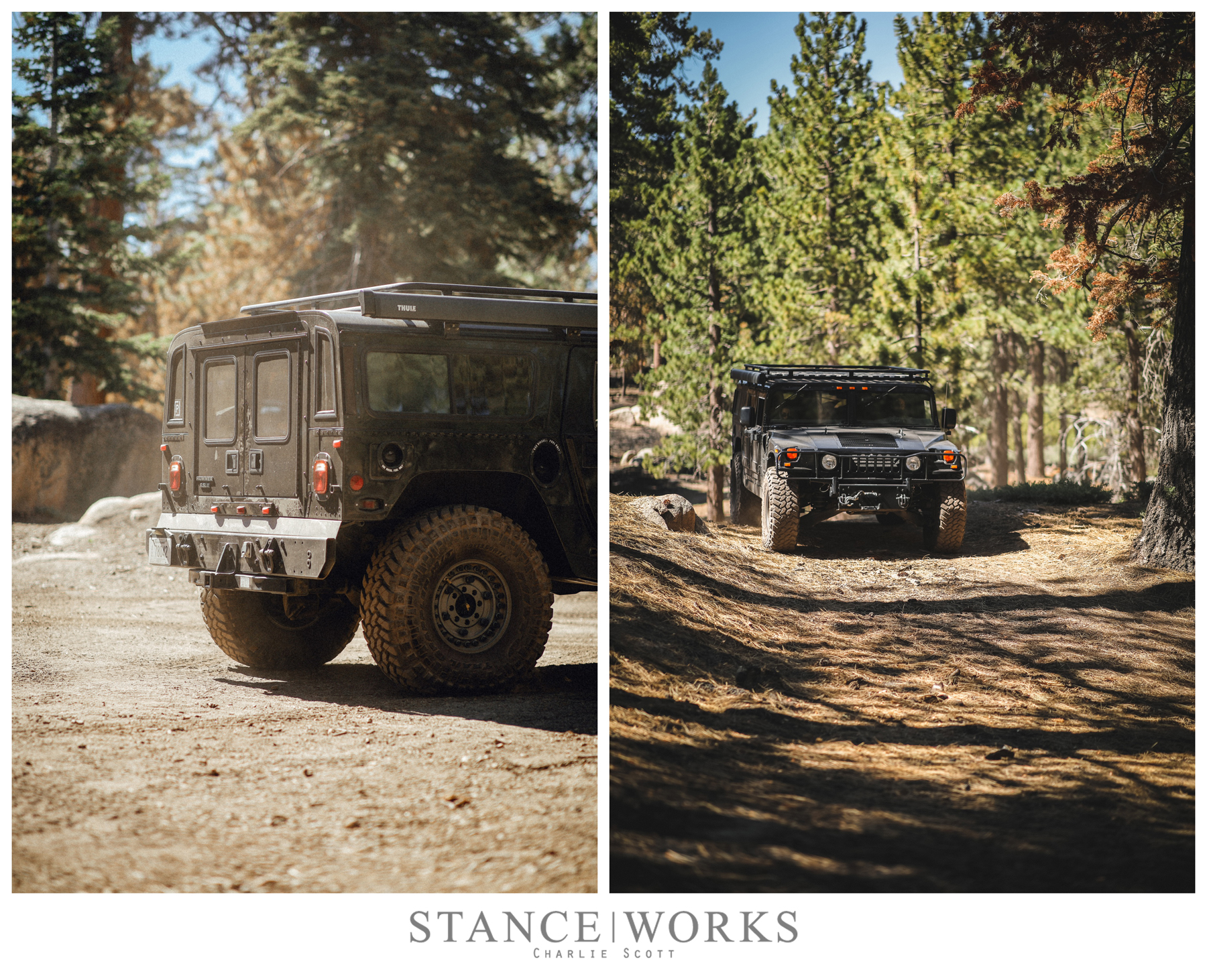 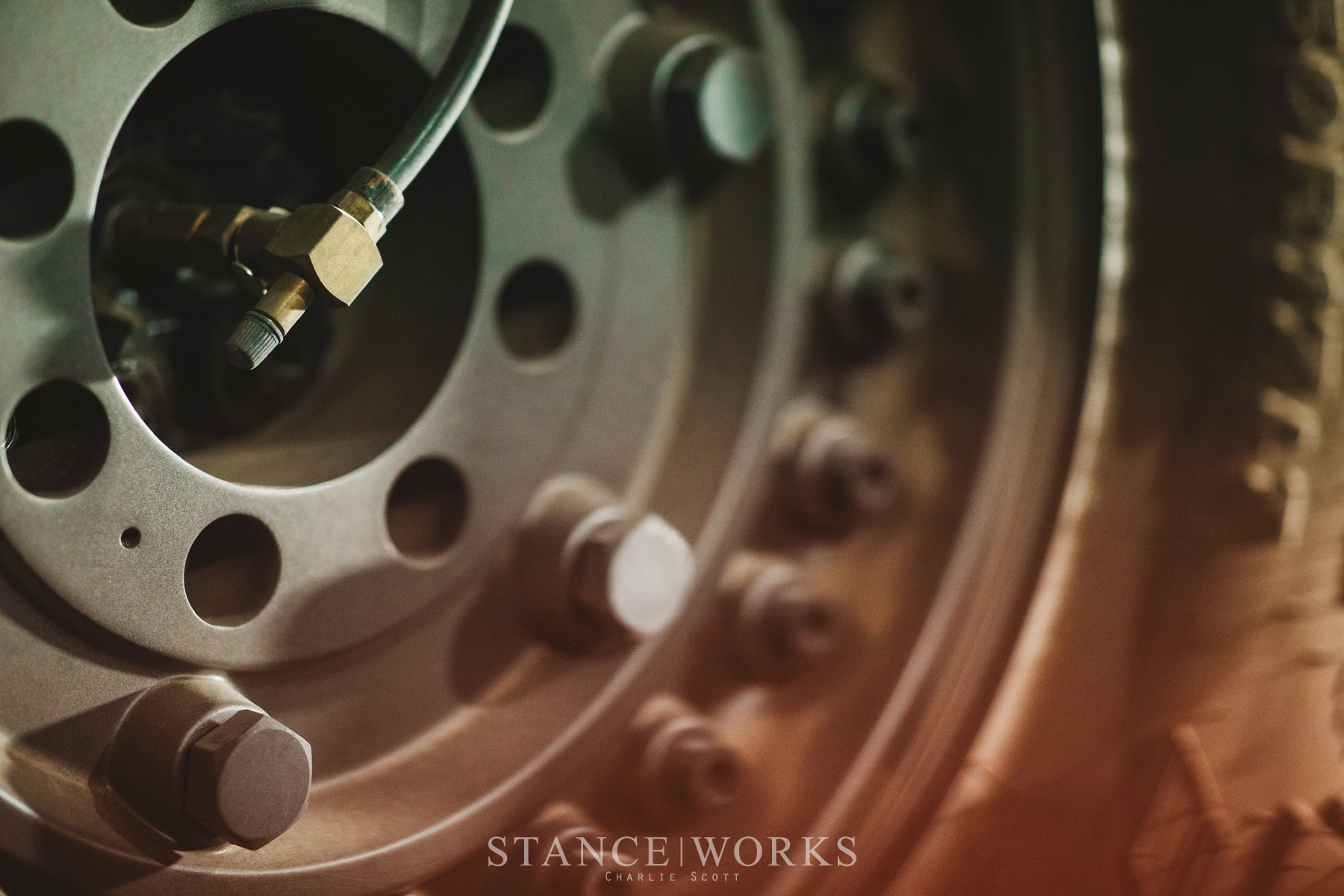 Emily, our dog Chloe, Charlie, and I packed into the Hummer and hauled up the mountain, arriving at the top a bit after noon on Friday. With the major Big Bear camp sites closed, we honed in on a few "off the map" dispersed locations, and with a little effort, found a perfect spot nestled in the woods, out of sight and out of mind of the rest of the world around us. After some back-and-forth on where exactly we should make camp, we set up, as simple as could be: Charlie pitched his tent while Emily and I unpacked the H1 and set up our new Thule awning, which provided some extra shade coverage in the clearing we had found. 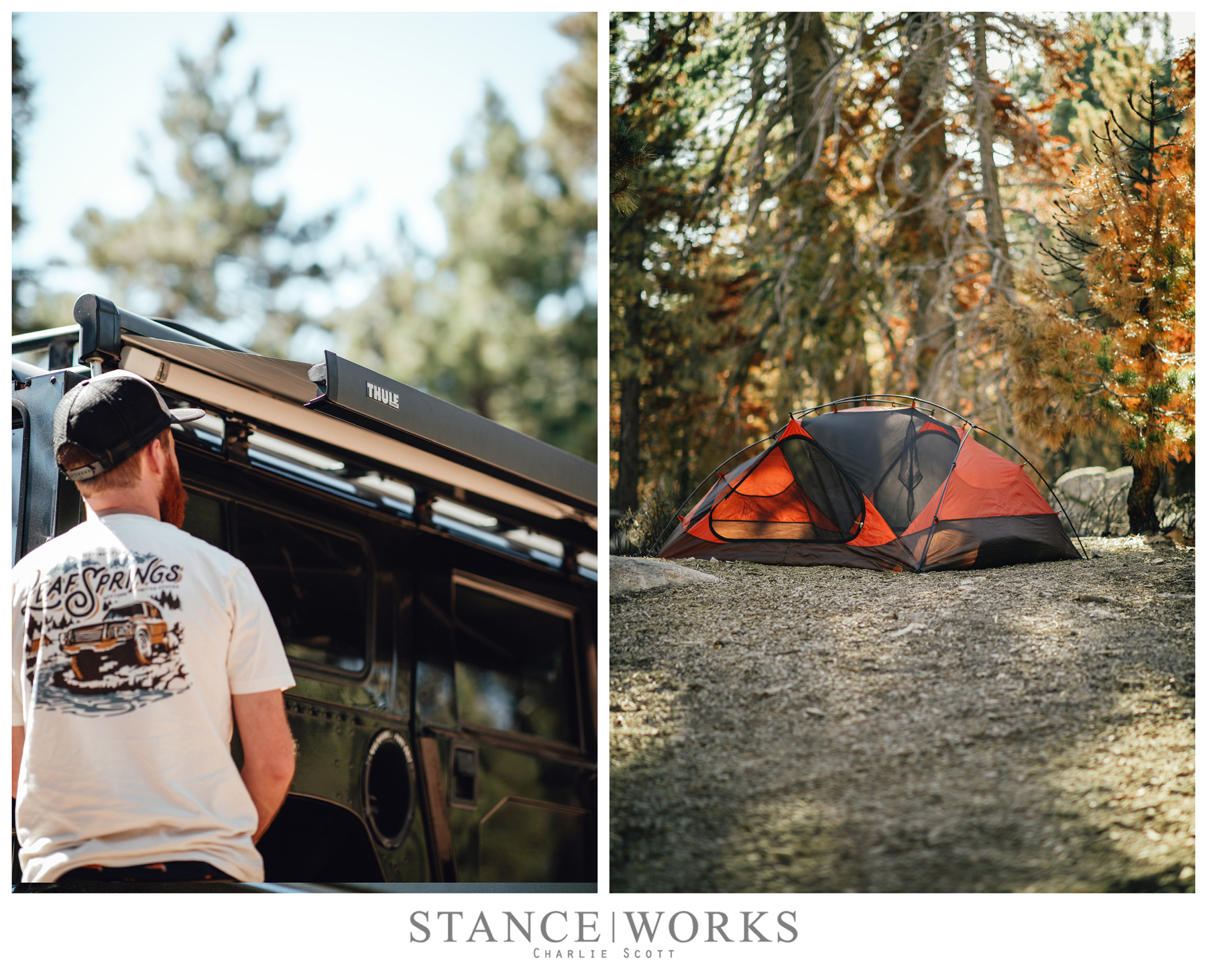 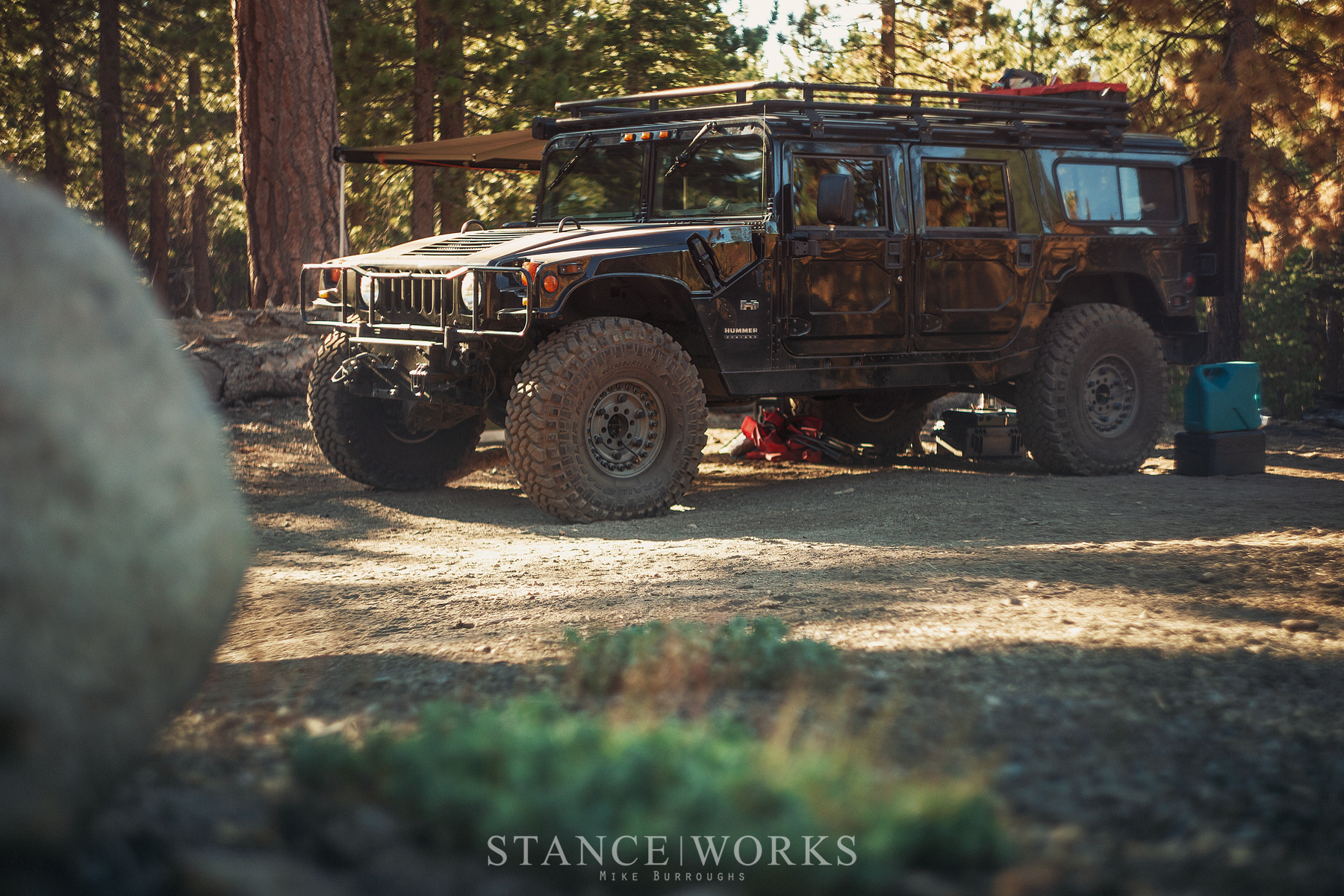 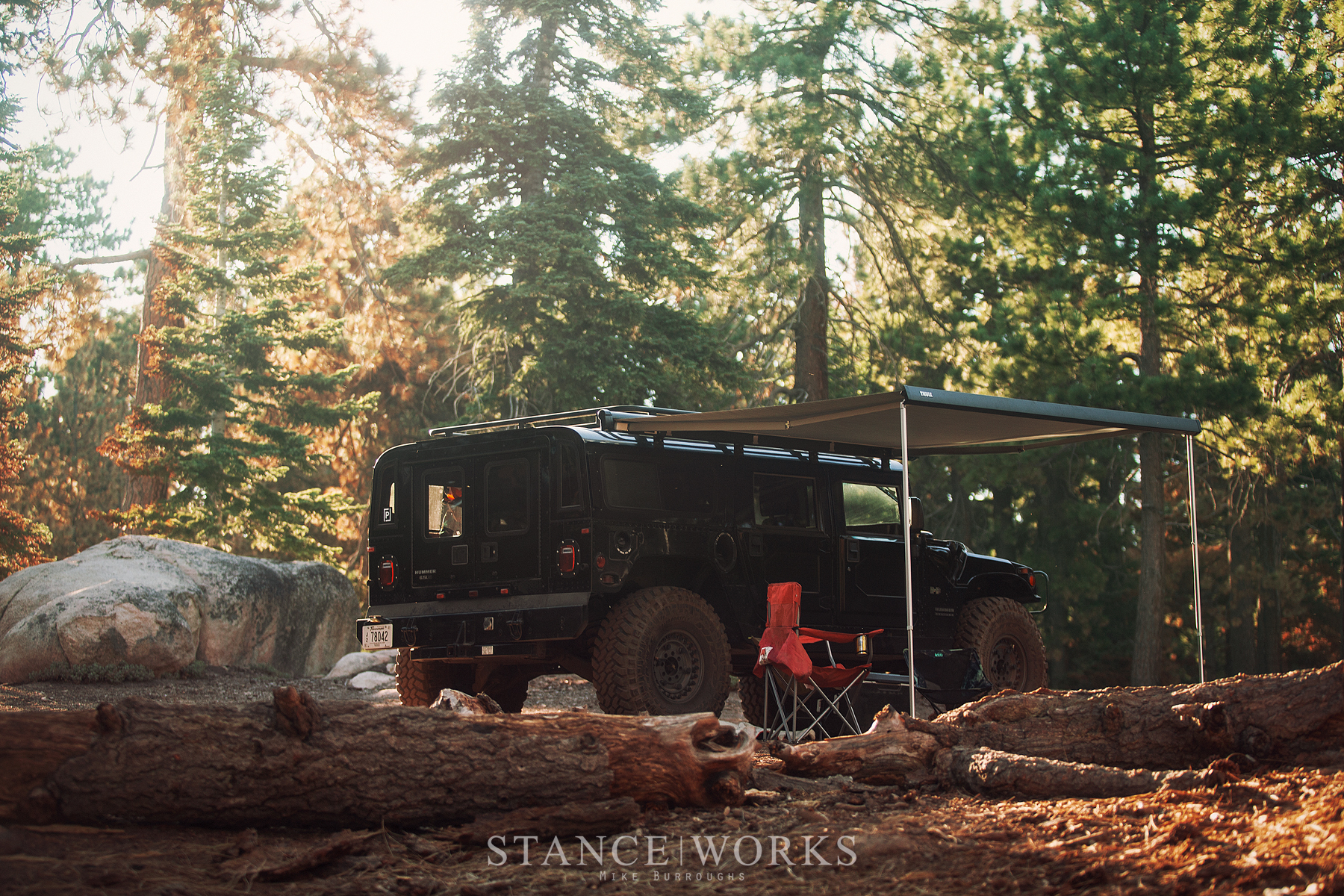 With a heavy, cool mountain breeze blowing, it was arguably perfect outside. We took a brief hike around camp, exploring what was nearby, eventually stumbling upon a reservoir nestled within the hills. We made lunch, eagerly awaiting an update from Andrew on what his arrival time would be. At 2PM, he surfaced: "I'm leaving LA now, I'll be there in a couple of hours." We made some drinks, kicked back, and enjoyed the silence and lack of service. 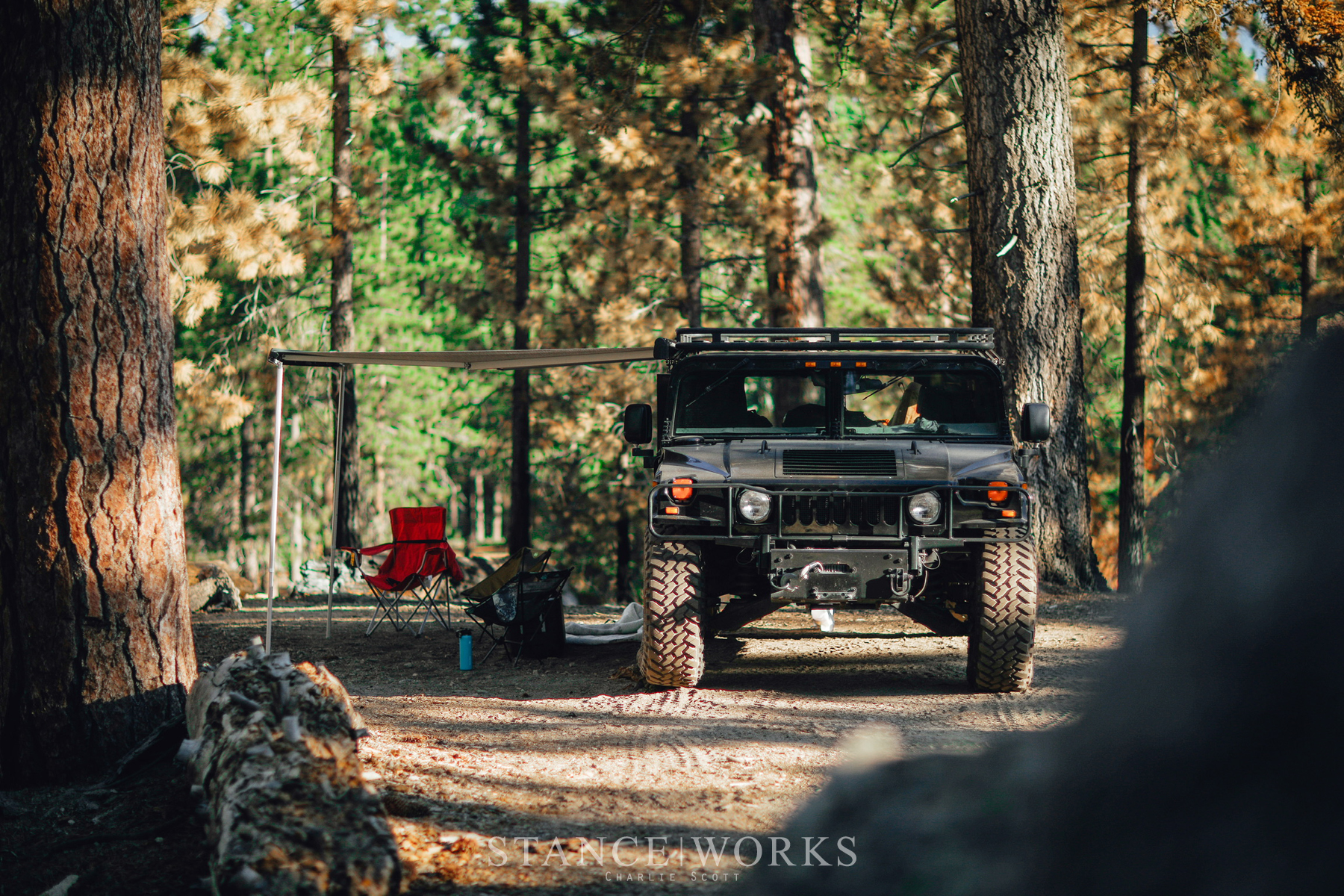 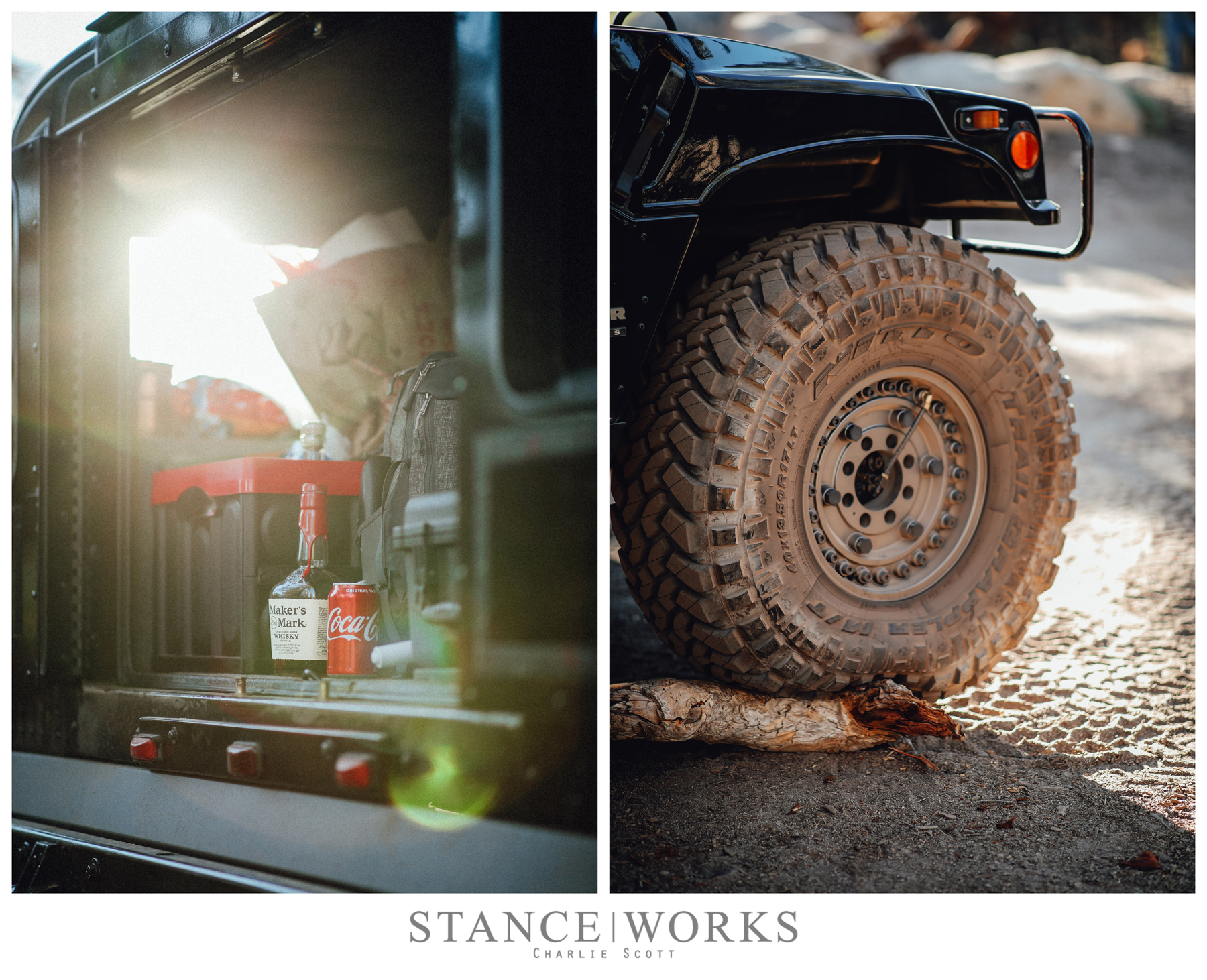 Come 7PM, there was still no sign of Andrew. As a hungry trio, we turned our sights on dinner, deciding that some mac & cheese with bacon would hold us over until Andrew, his dog Rango, and Nataljia arrived. In an unfortunate series of events, though, our collapsable pan did just that: collapsed, sending the cheese half of our mac into the dirt. In what may be one of the most laughed-over meals I've ever had, we wolfed down buttered-down noodles with bacon, and chased it down with mashed potatoes. The Makers Mark that followed was icing on the cake. 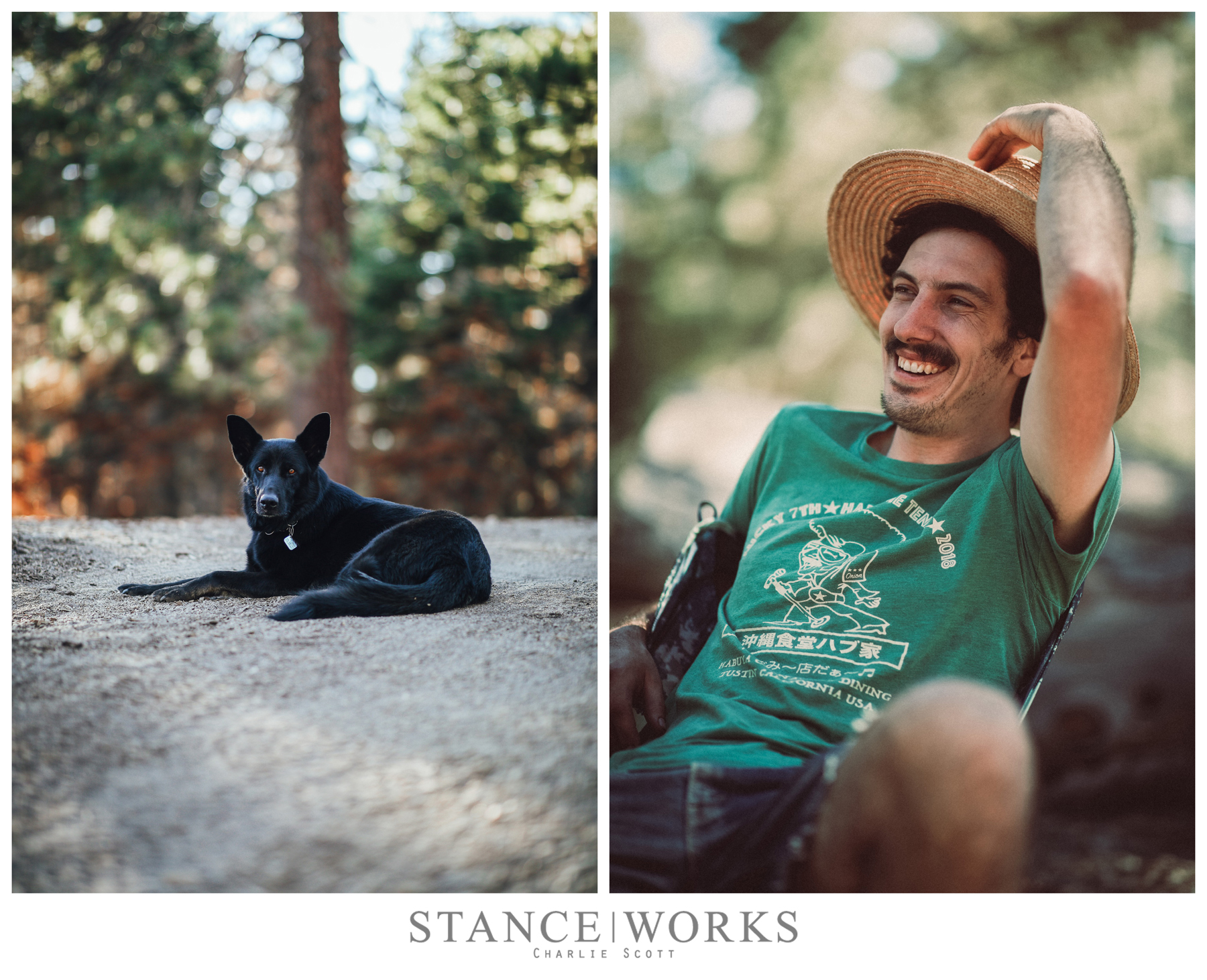 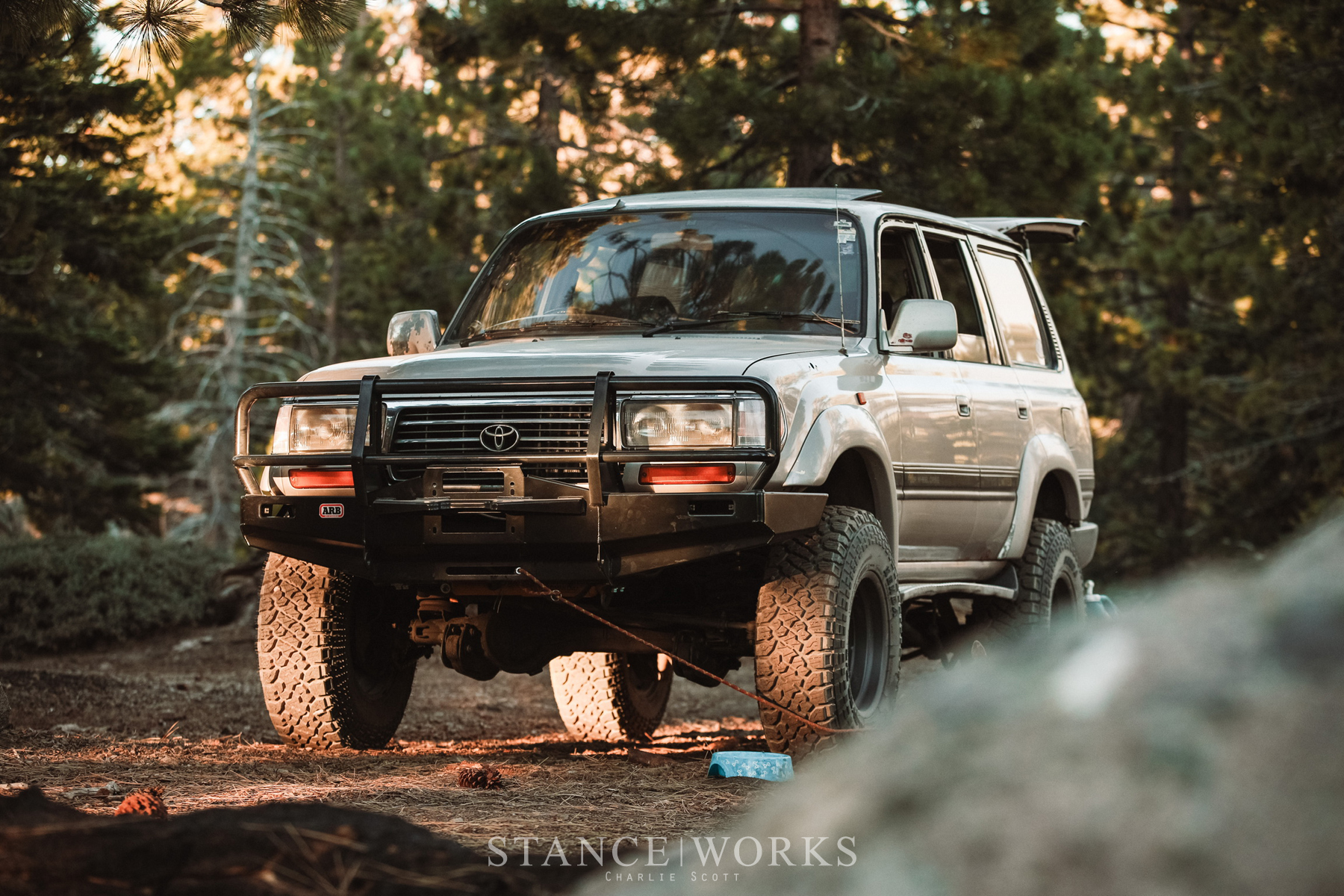 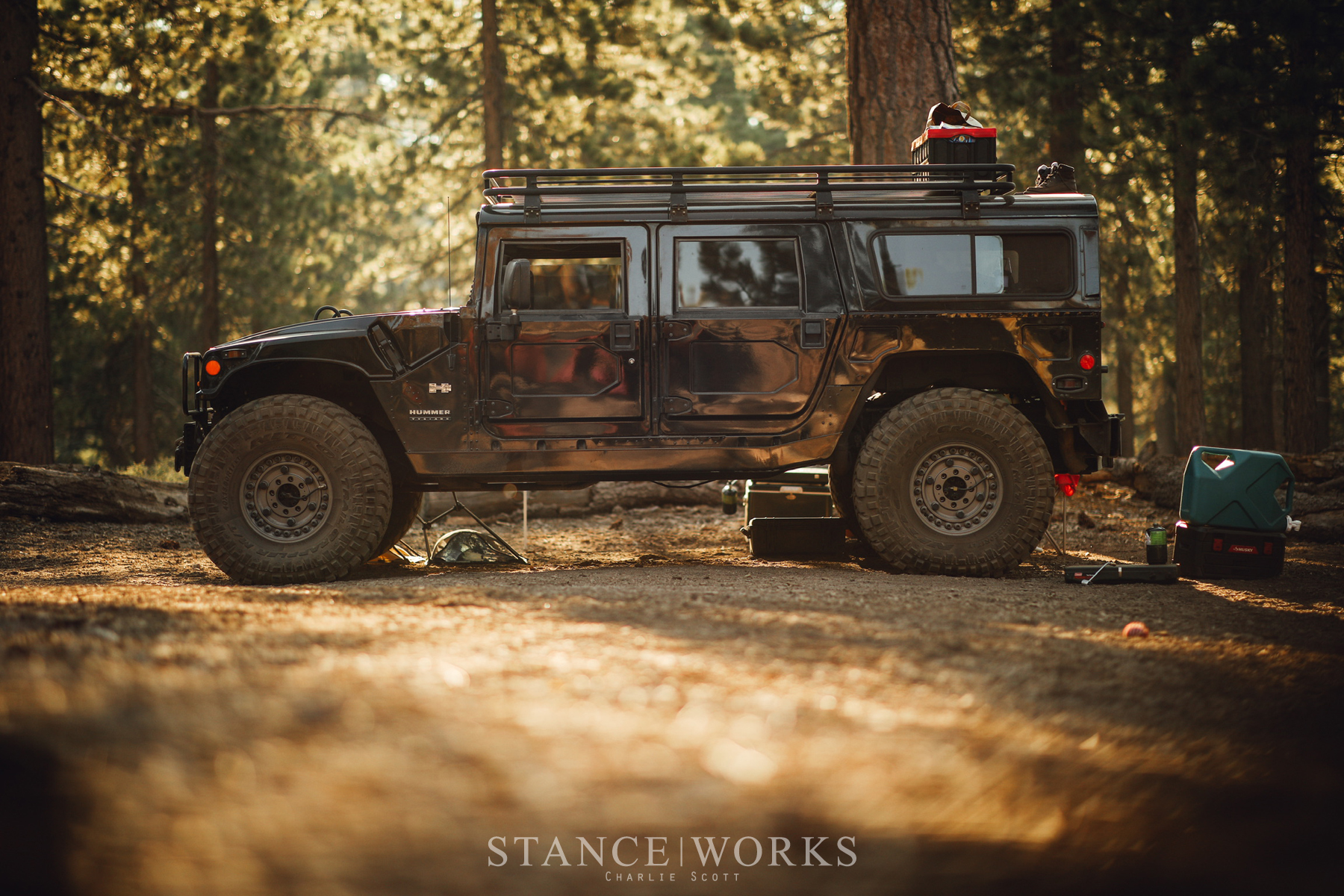 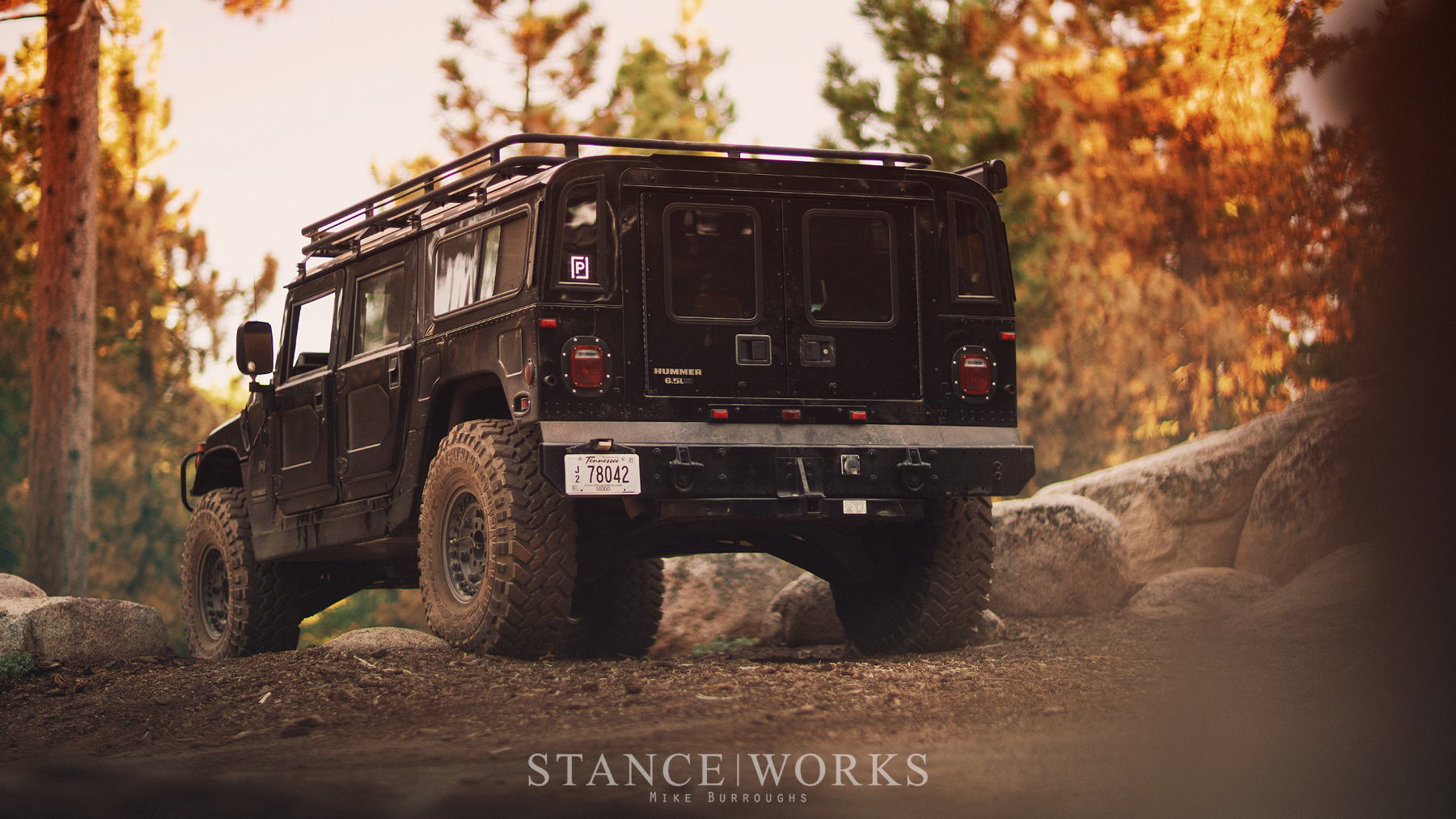 Eventually, Andrew and Nataljia arrived, joining us for drinks to punctuate the evening. With campfire restrictions, we huddled under lanterns suspended from the Hummer's awning: enough light to enjoy the company, although the social aspect of a camp fire was sorely missed. The following morning, eggs, bacon, and hot sausage were cooked up along with coffee, which started Saturday off with a bang. Rumor had it that Jim Bob would join us too, making for nearly half of the SW Off Road crew. As the day went on though, it turned out scheduling conflicts meant it would be just us five. We considered hitting some trails in the trucks around mid-day, but a jaunt out of camp and back to more popular areas of Big Bear brought about our biggest fear: masses of folks eager to spend their Saturday doing the same thing. We quickly hurried back down the trail and down to camp, sealing ourselves off from the outside world for the remainder of our trip. 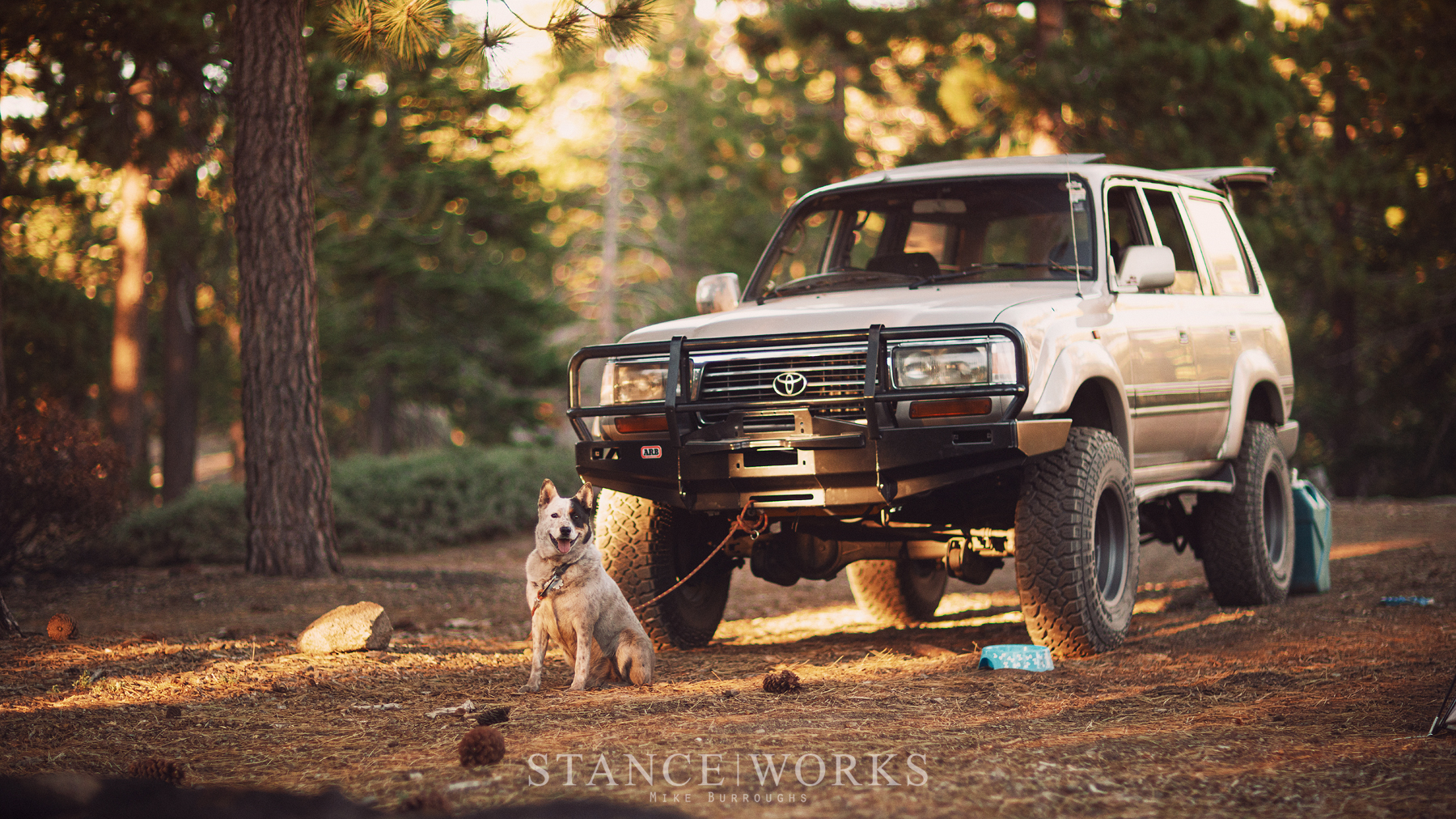 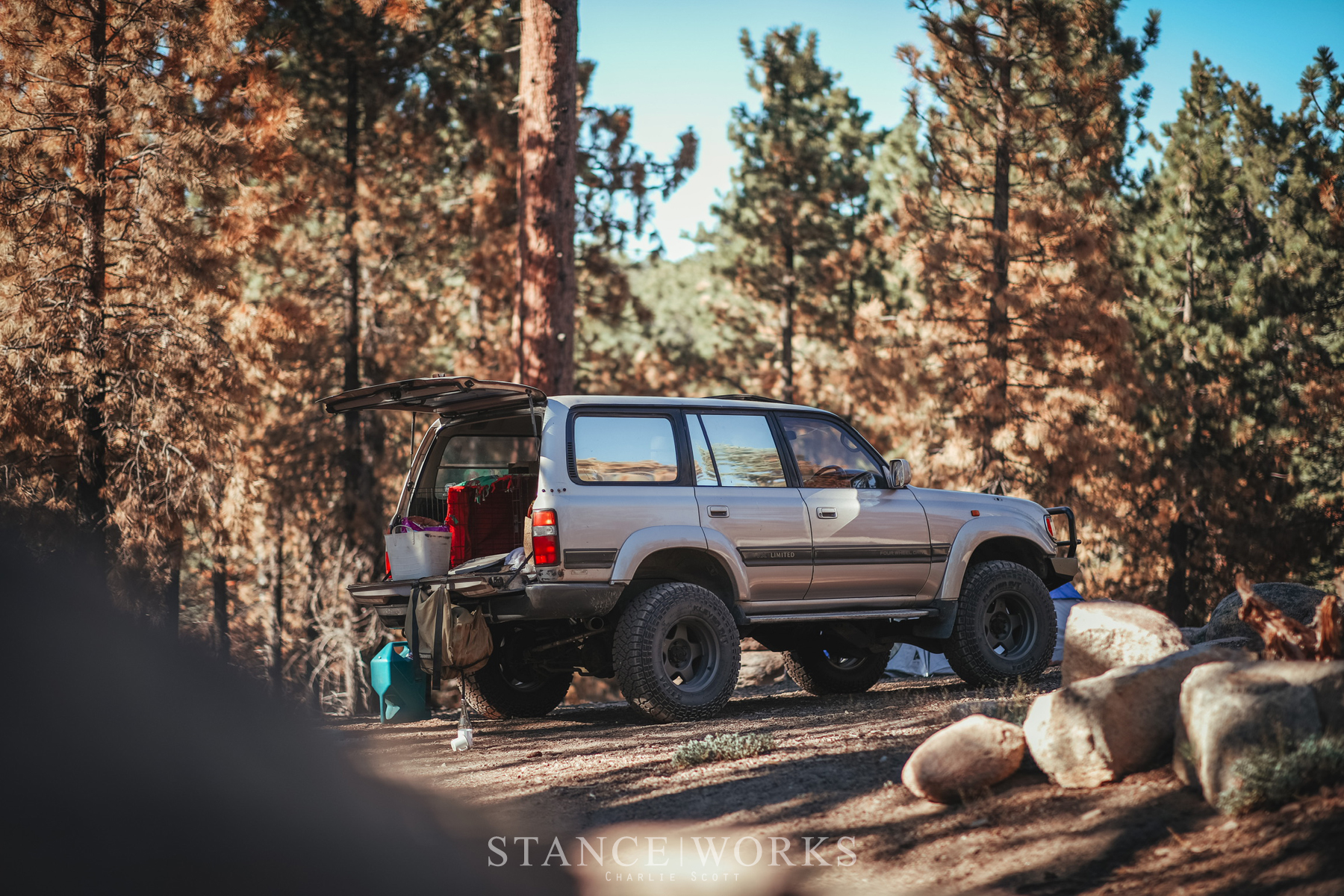 As has become tradition at camp thanks to Jean and Justin (our Colorado Cohorts) , we spent far too much time plinking cans with our Red Ryders. We hiked, climbed far-too-sketchy rocks, and found wildflower clearings nearby, which was a pleasant, sublime surprise. Once back at camp, we couldn't help ourselves, and climbed the trucks up onto some nearby rocks to see what the old rigs were made of. 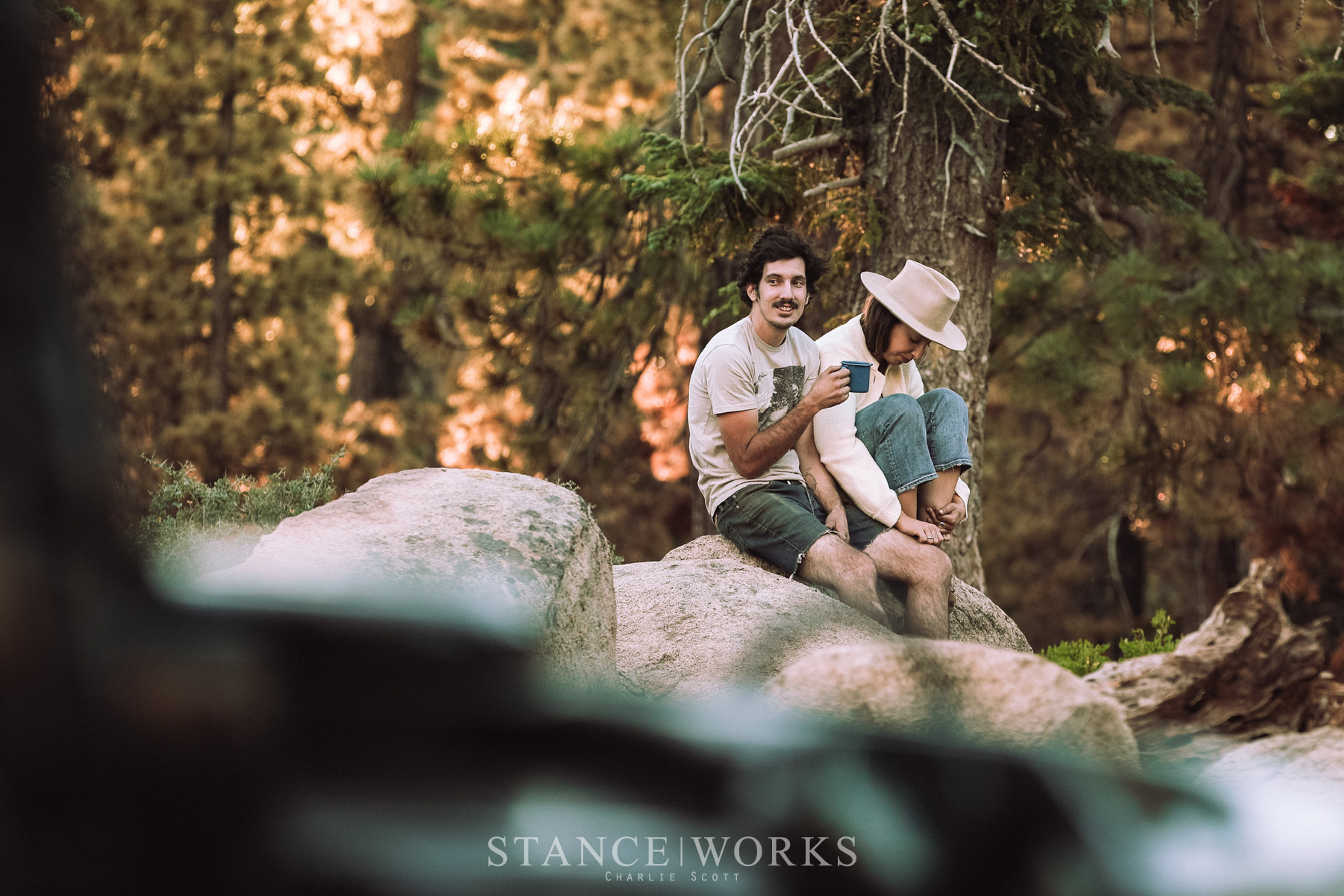 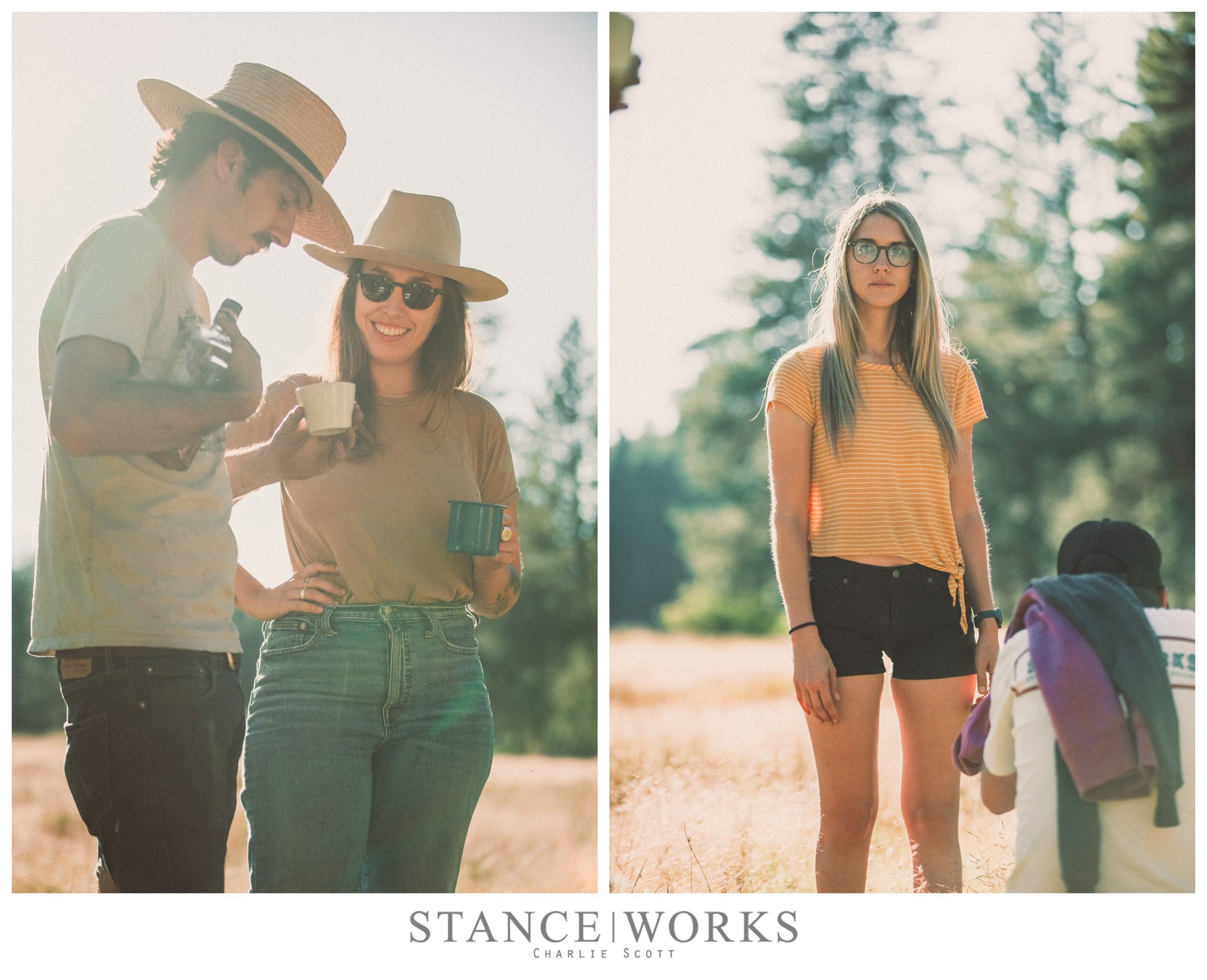 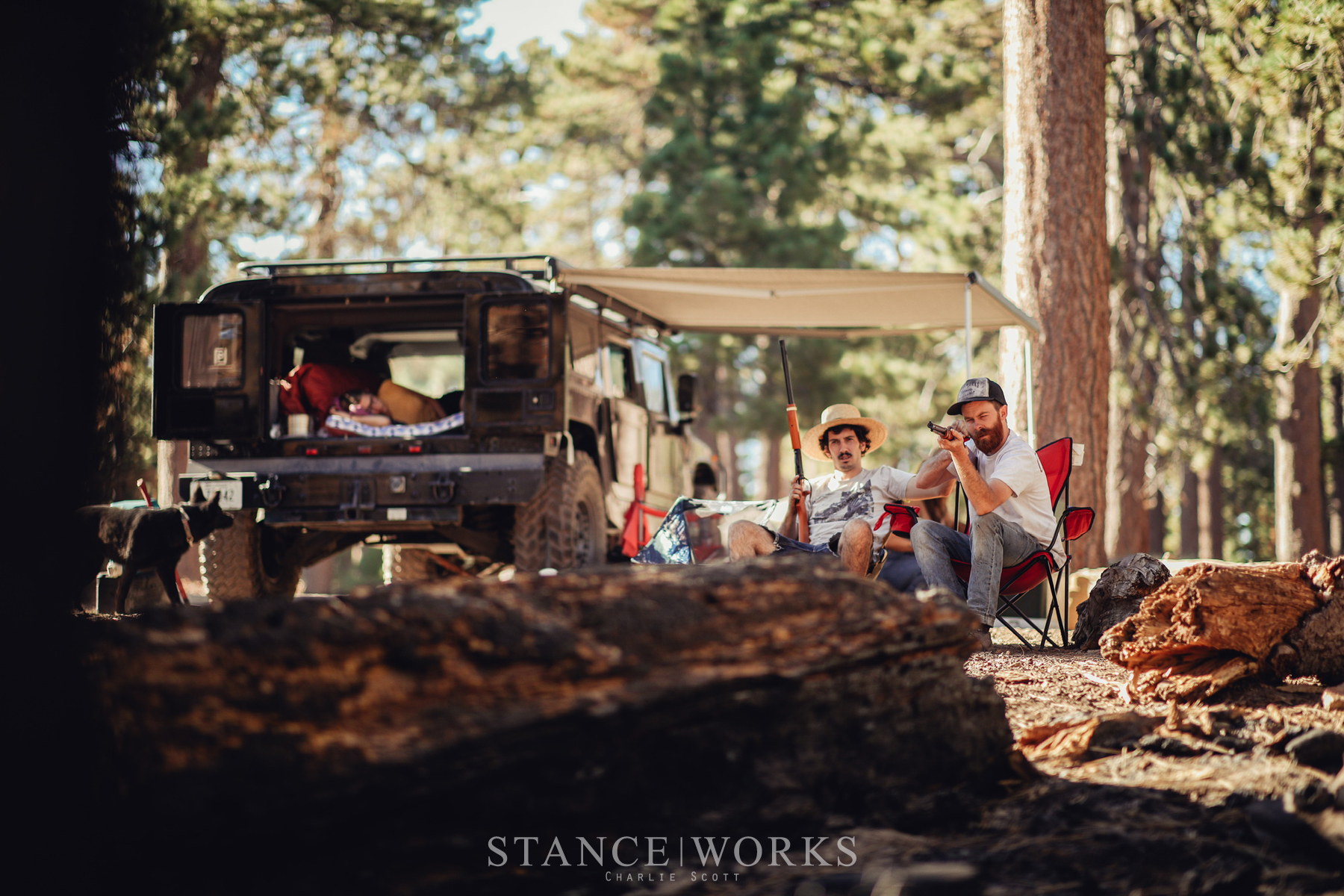 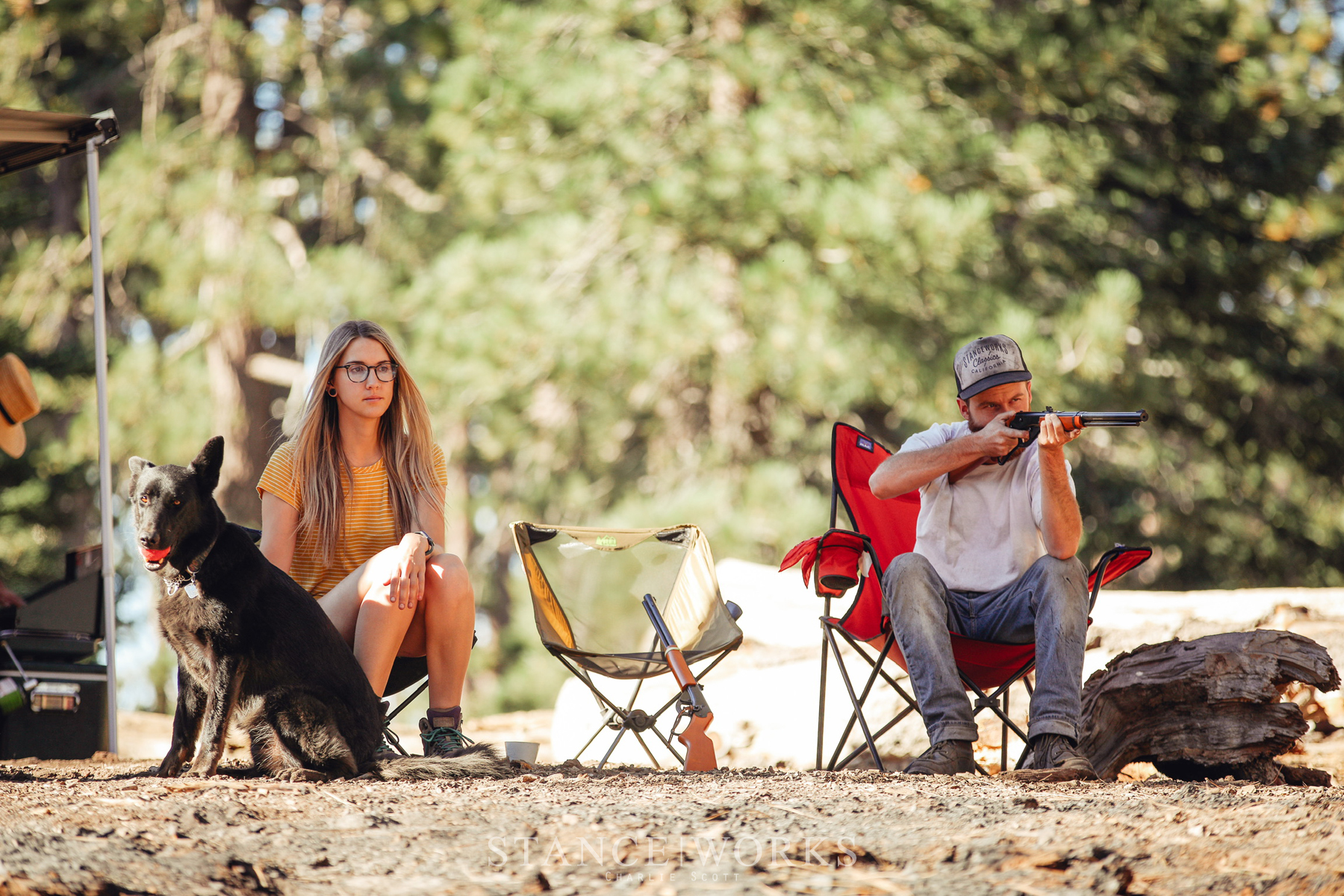 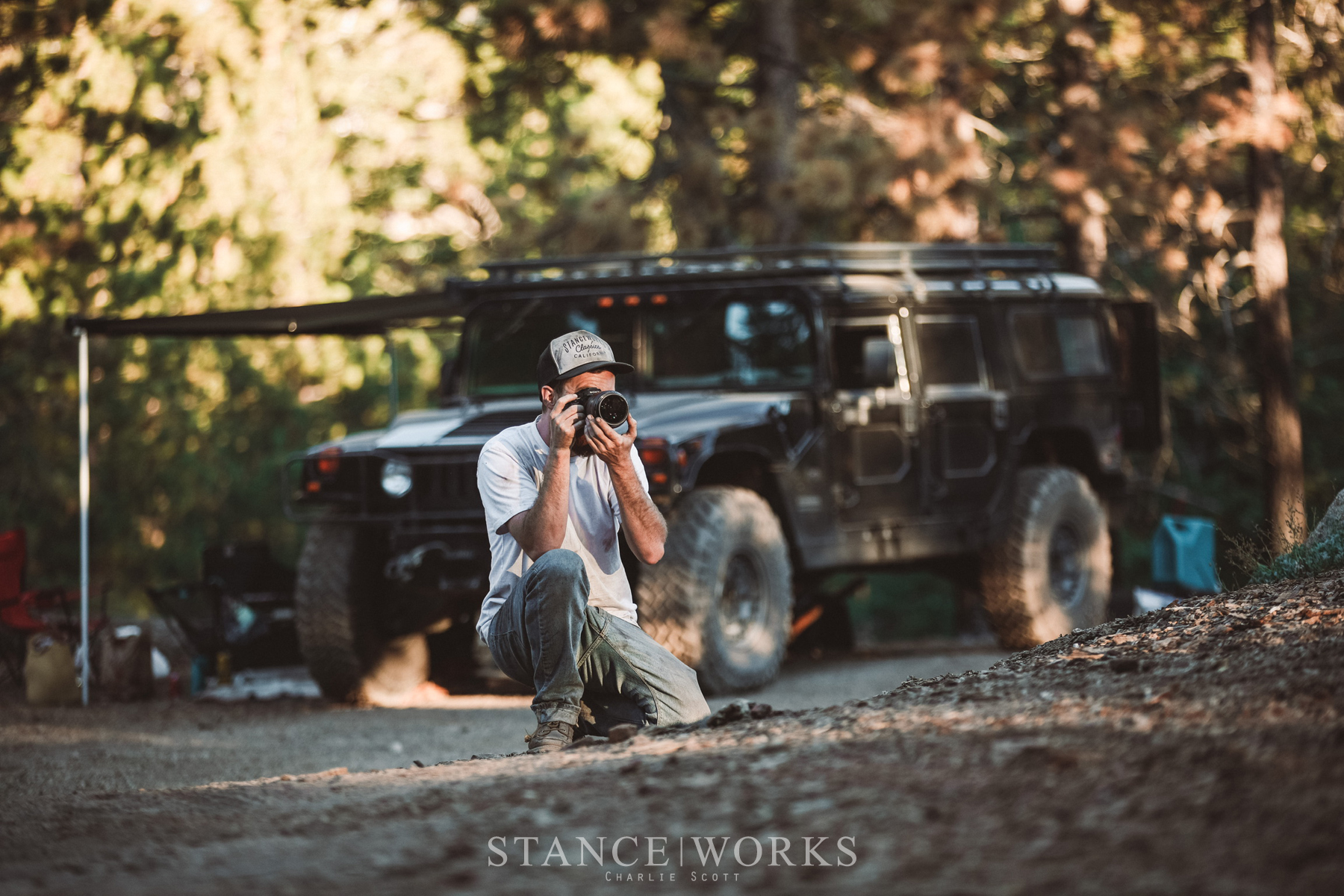 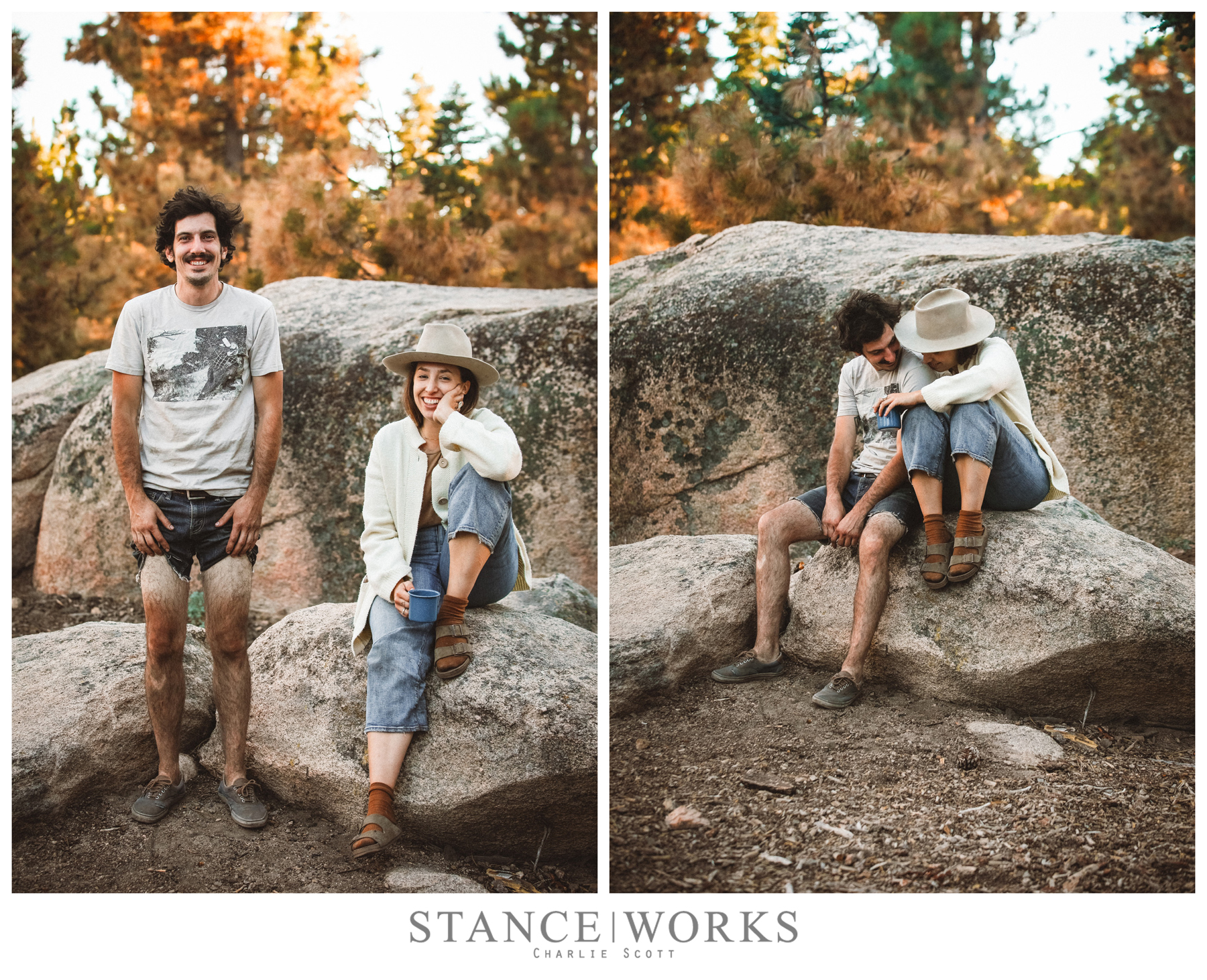 Surprisingly, both trucks struggled a bit with the incredibly silty soil, which was quick to give way to even a bit of tire slip, especially with the open differentials and massive weight of the Hummer. Lockers are undoubtedly on the short list. With a bit of work, though, the Nitto Trail Grapplers did what they do best, leading to some fun photos of the H1 "flexed" as much as it's ever bound to be. Photos capped the day before Andrew and Nataljia cooked up pulled pork sandwiches on the tried and true Coleman. The only downside of the day: the dry air, along with the dust kicked up from the nearby controlled burn. It had a few of us in a bit of a fog, leading to a somewhat early night. Around 10:00PM, we retreated to our respective trucks and tents. 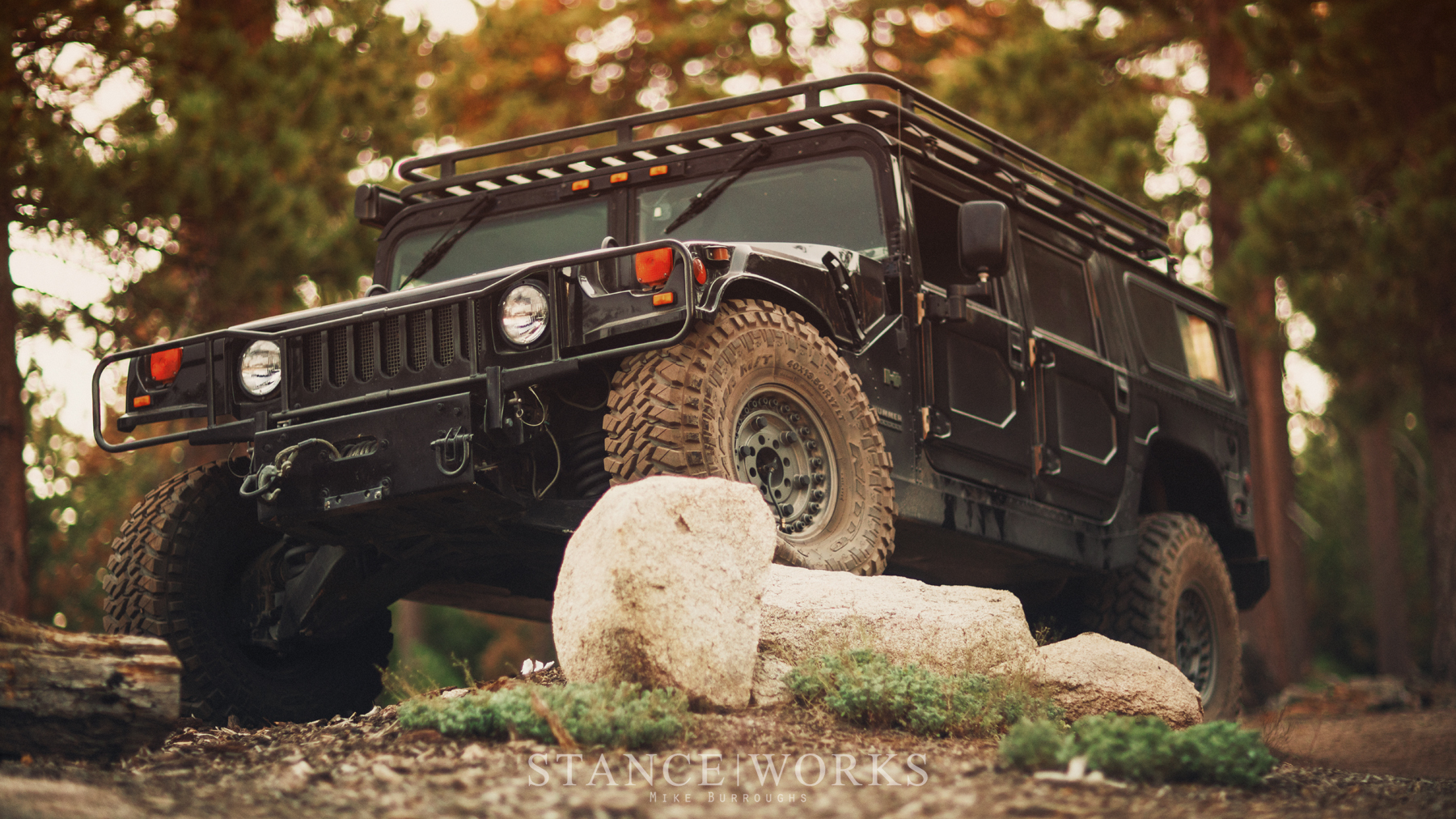 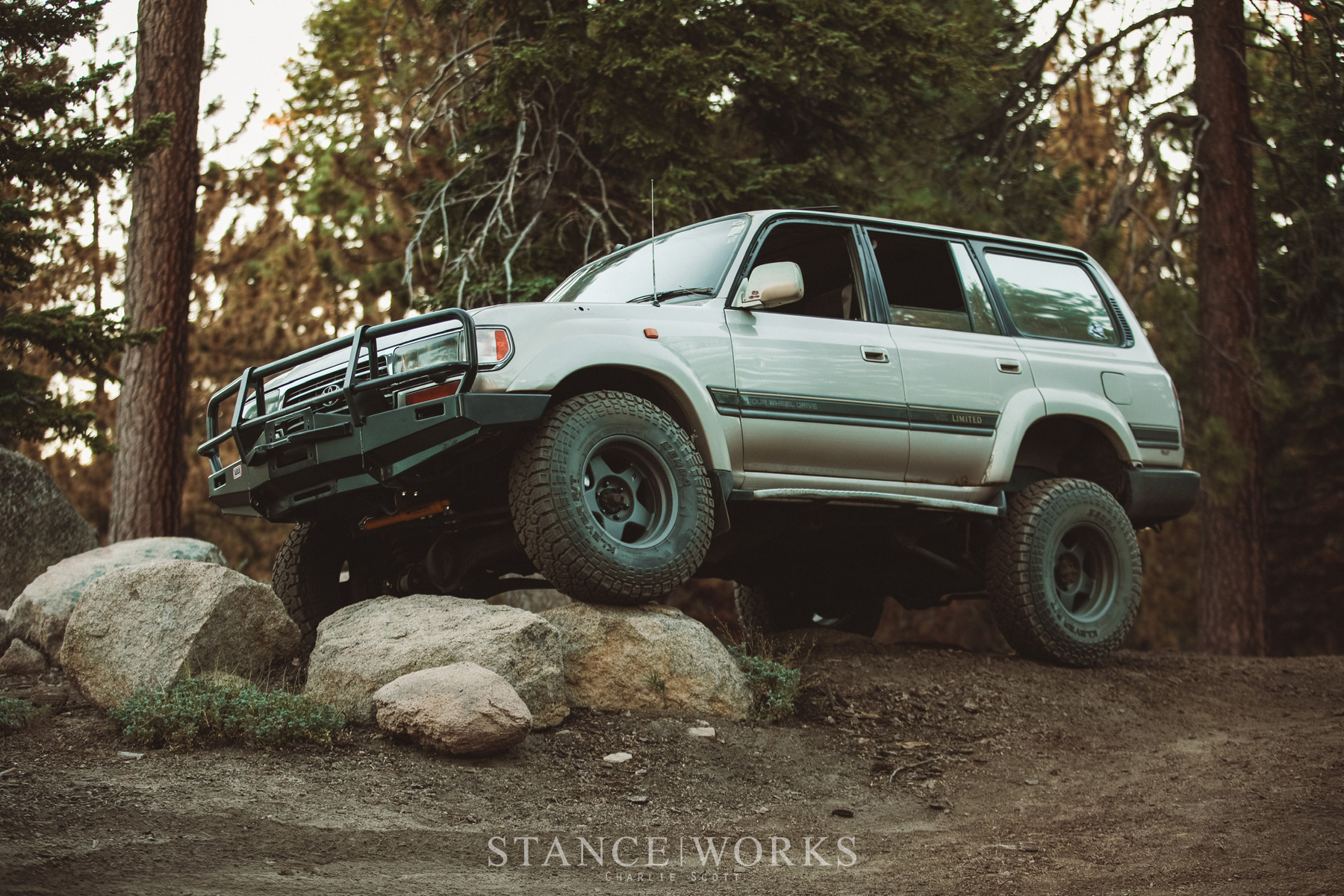 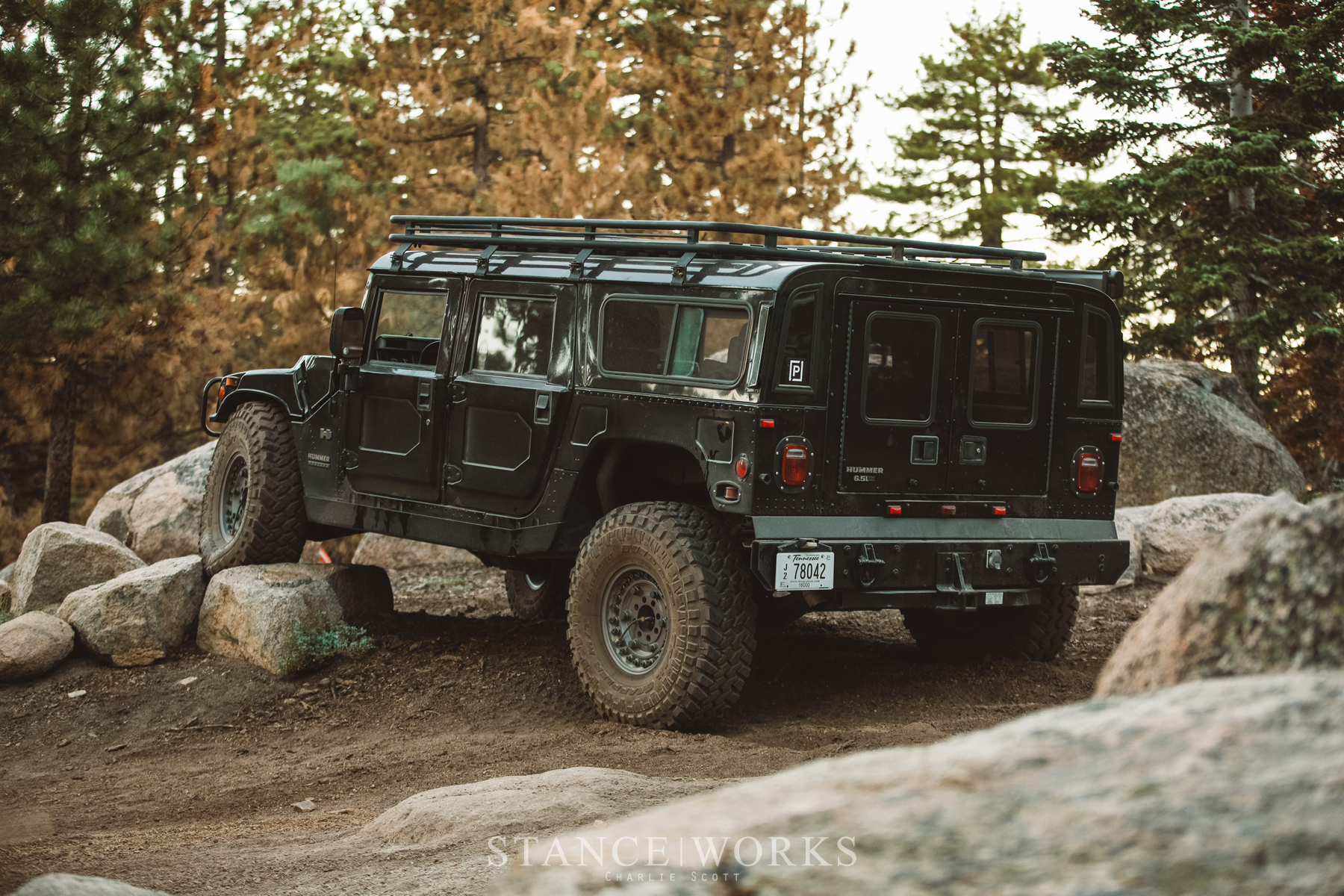 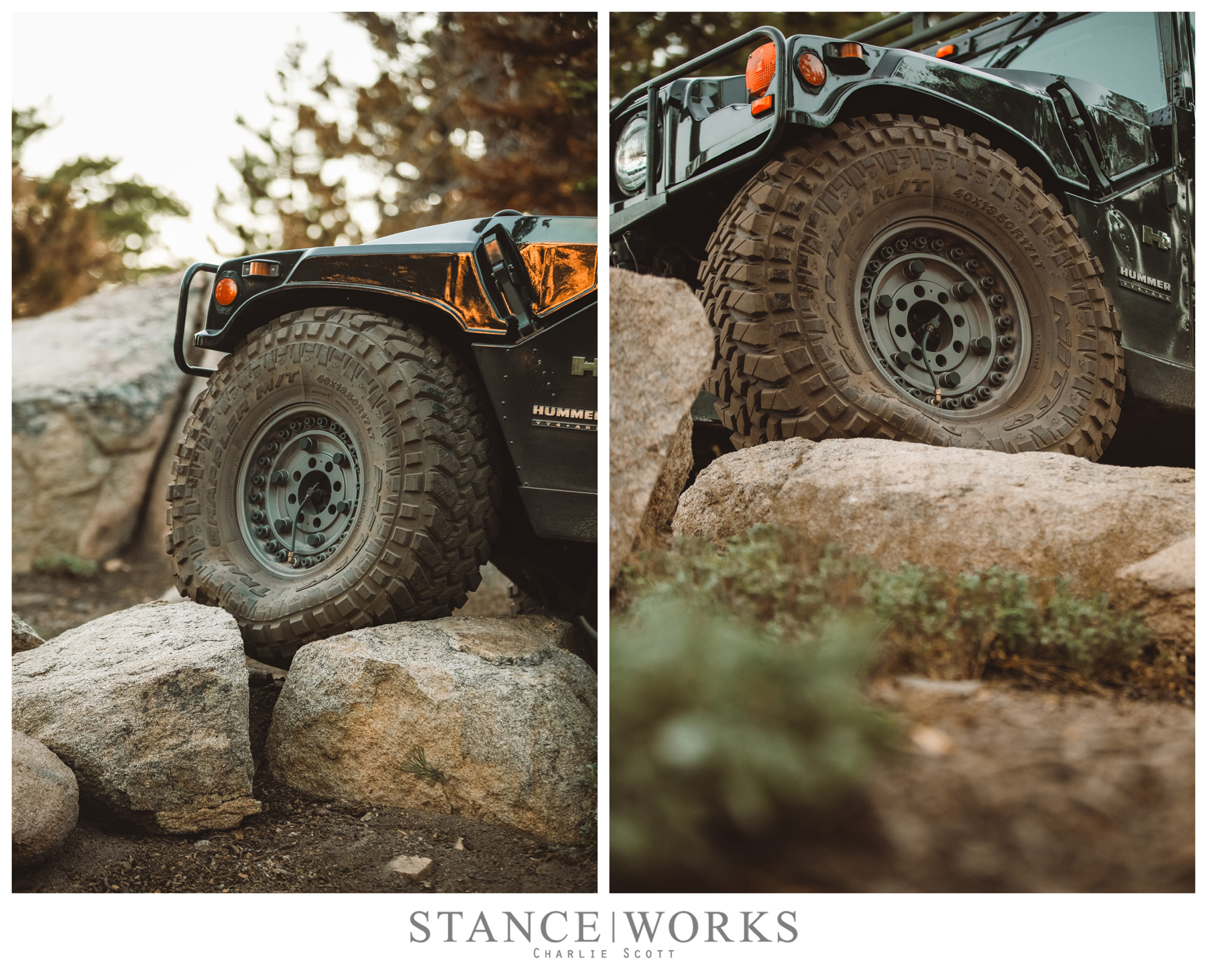 The morning came quickly, which brought about coffee and brown sugar pancakes: I had been waiting all week (and in fact, realized part way through breakfast that as an adult, I can make pancakes for dinner, any time I want.) The final morning of any camp trip always brings about a faint sense of anxiety: knowing that no matter how long or short a given trip was, it's on its last leg. It's that common "Sunday" feeling knowing that Monday is just around the corner, only somehow worse. Although the rest of the day was enjoyable, it only served to further solidify the fact that we can't let 2020 pass without a proper trip out. Fingers crossed that by year's end, we'll find a week or two to make a break for the hills and meet up with the rest of the StanceWorks Off Road Family. 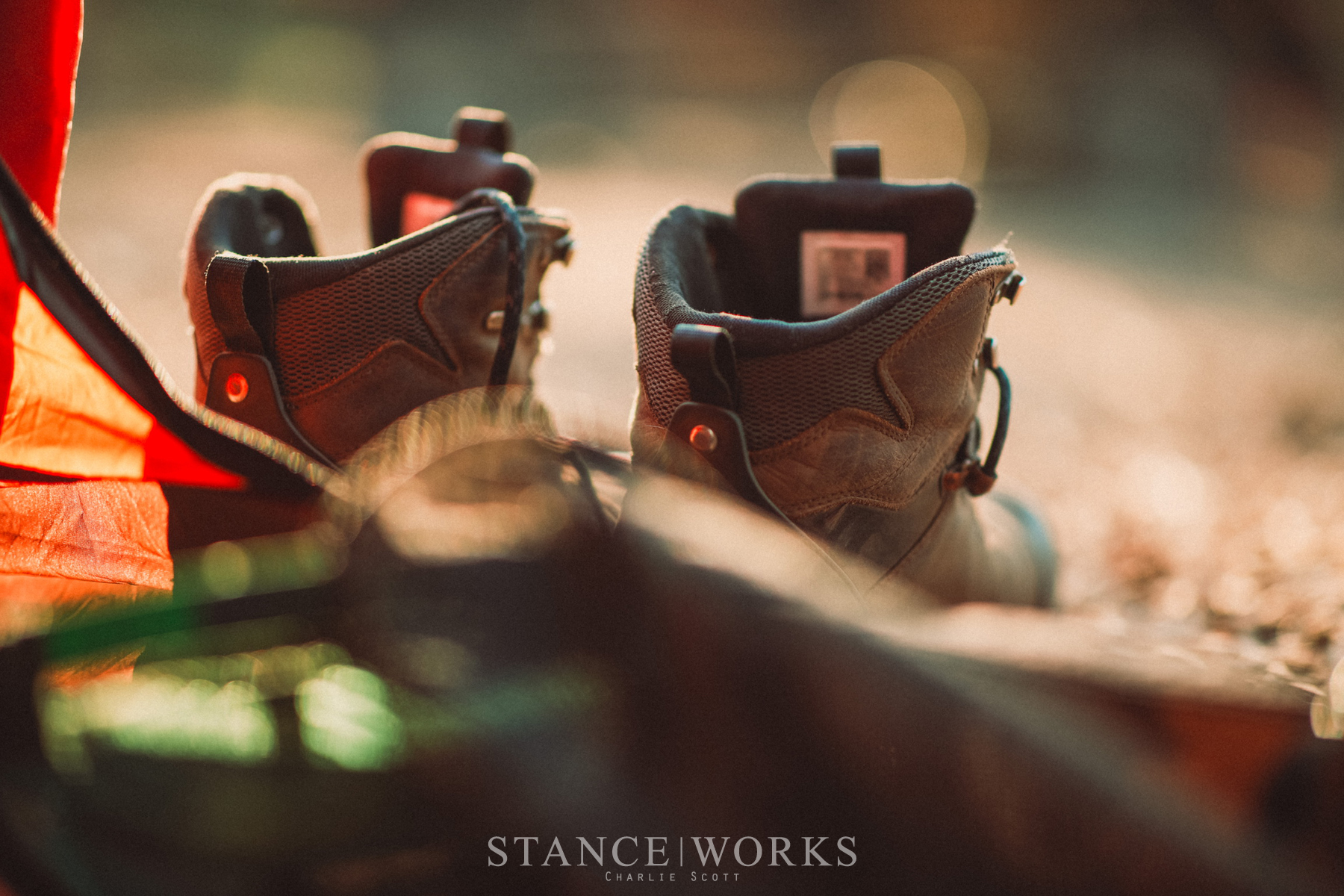 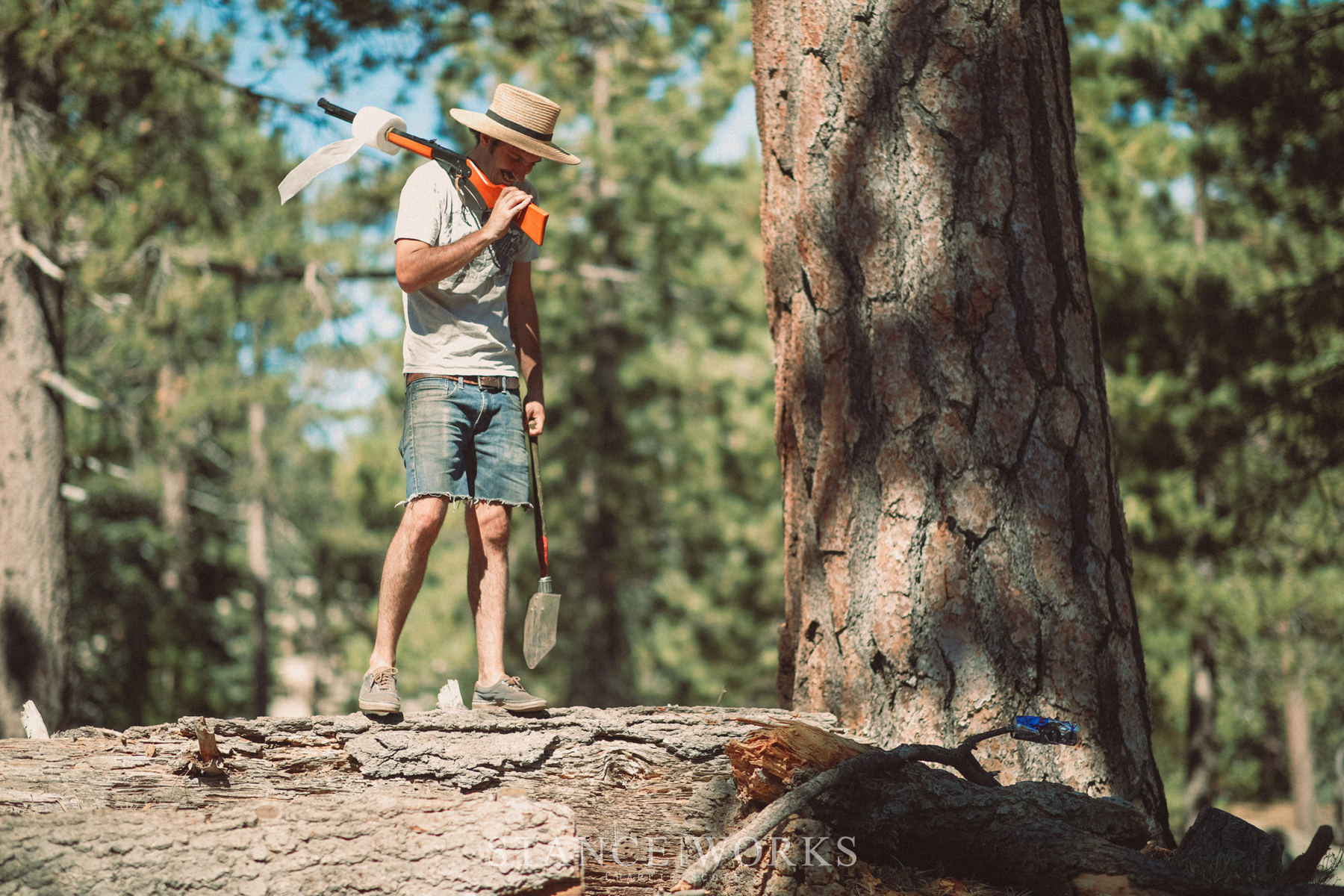