StanceWorks Off Road – Land Cruiser Camping at the Brooklyn Mine

StanceWorks Off Road – Land Cruiser Camping at the Brooklyn Mine

For more than just ourselves, weekends represent a sacred separation between work and play. It's safe to assume we all look forward to Friday at 5:00PM, no matter what our weekend plans may be. Whether it's drinks with friends, some couch slumping, or a day spent in the great outdoors, time to ourselves is vital. Last weekend, we made our own escape, traveling to the outskirts of Joshua Tree National Park for a camping trip getaway full of beautiful scenery, abandoned mines, and most importantly, trucks. 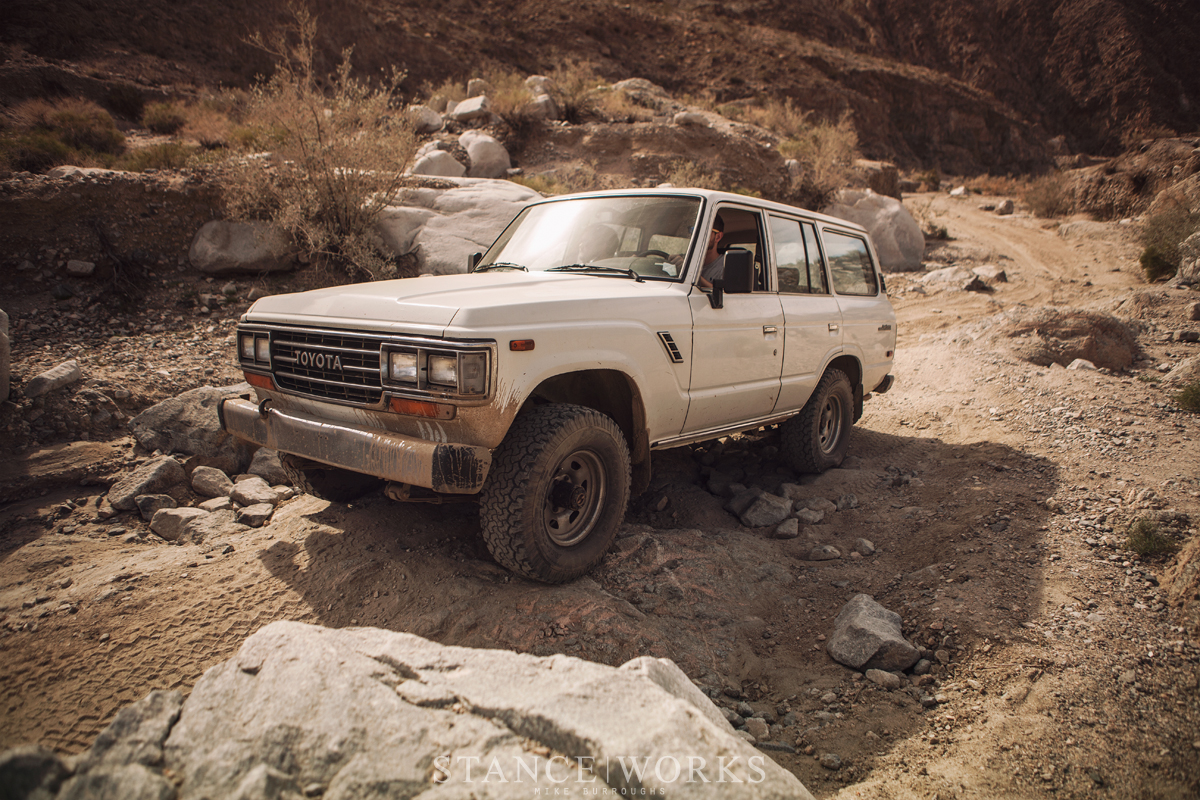 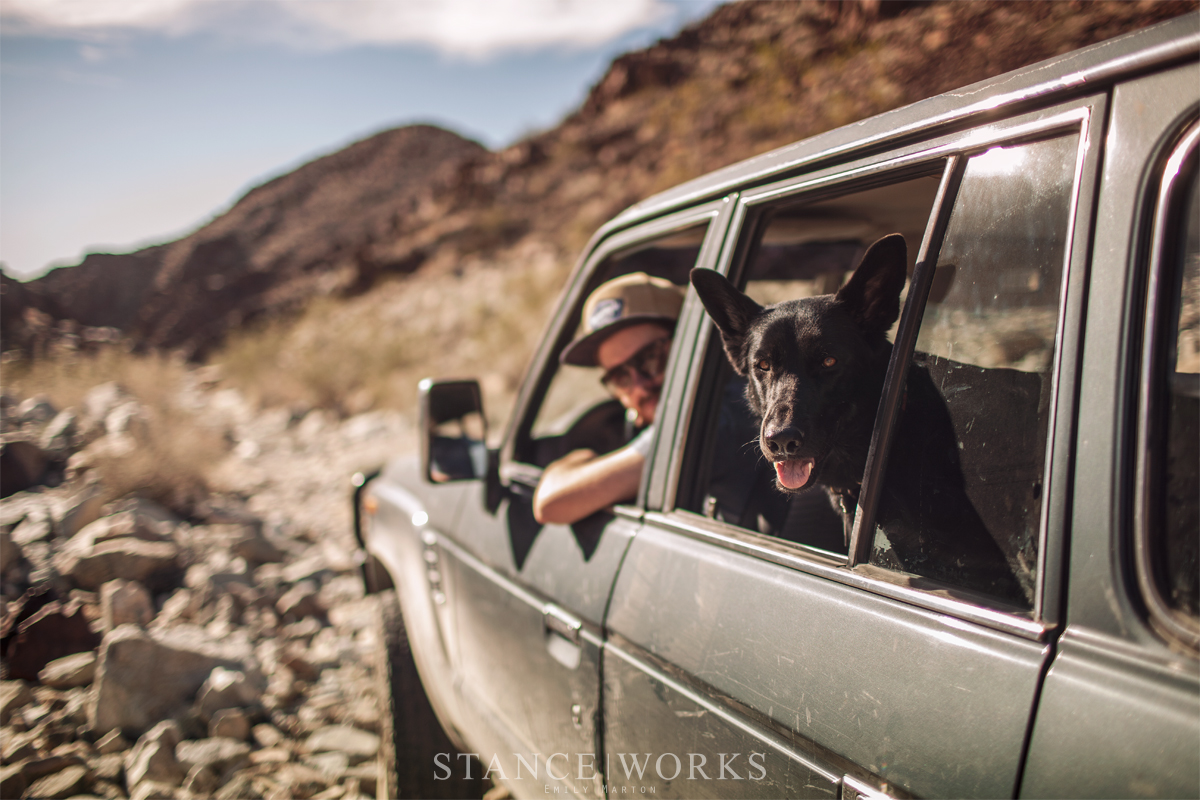 With Cory Hutchison loaded up into Josh Dahlstrom's Land Cruiser, and with my girlfriend Emily and our dog, Chloe, loaded into mine, we set off up Berdoo Canyon trail as our entryway into Joshua Tree. The beginning of the trail is marked by audible gunfire - a popular location for target shooters, just outside of Indio, California. It didn't take long, however, before we were on our own, making our way through the trodden trail. 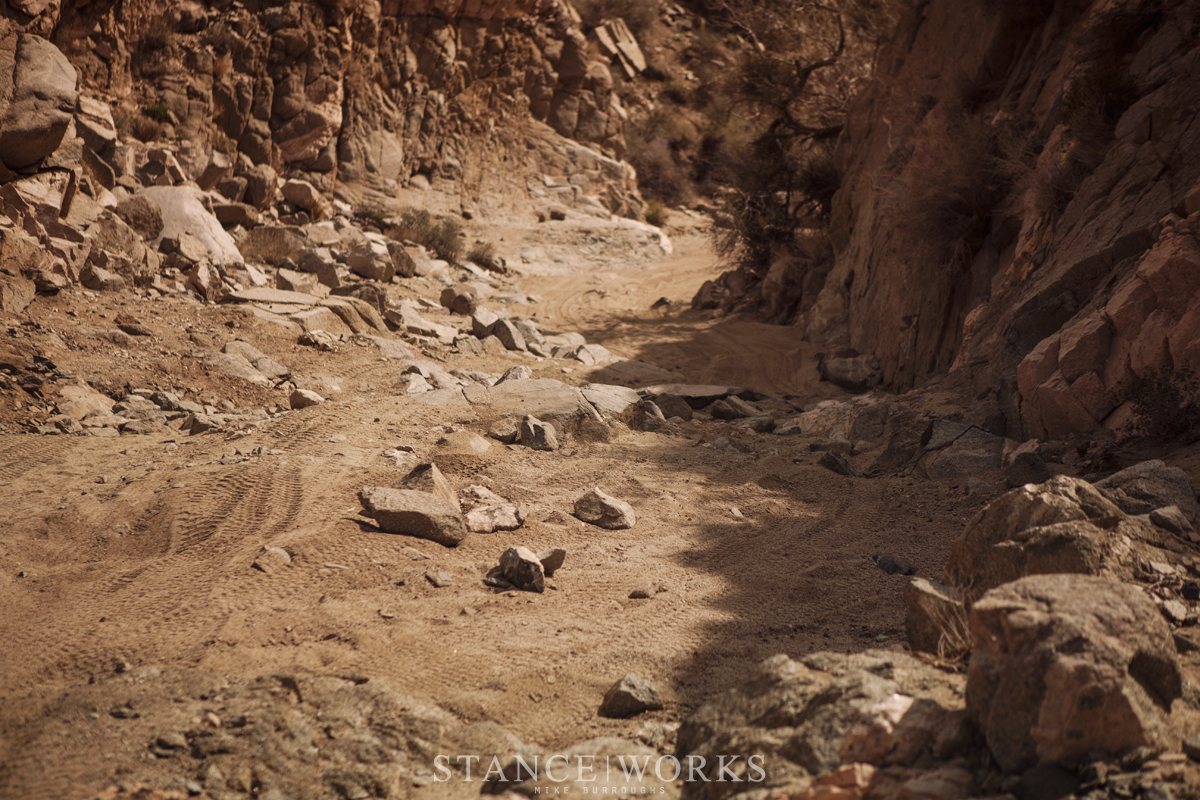 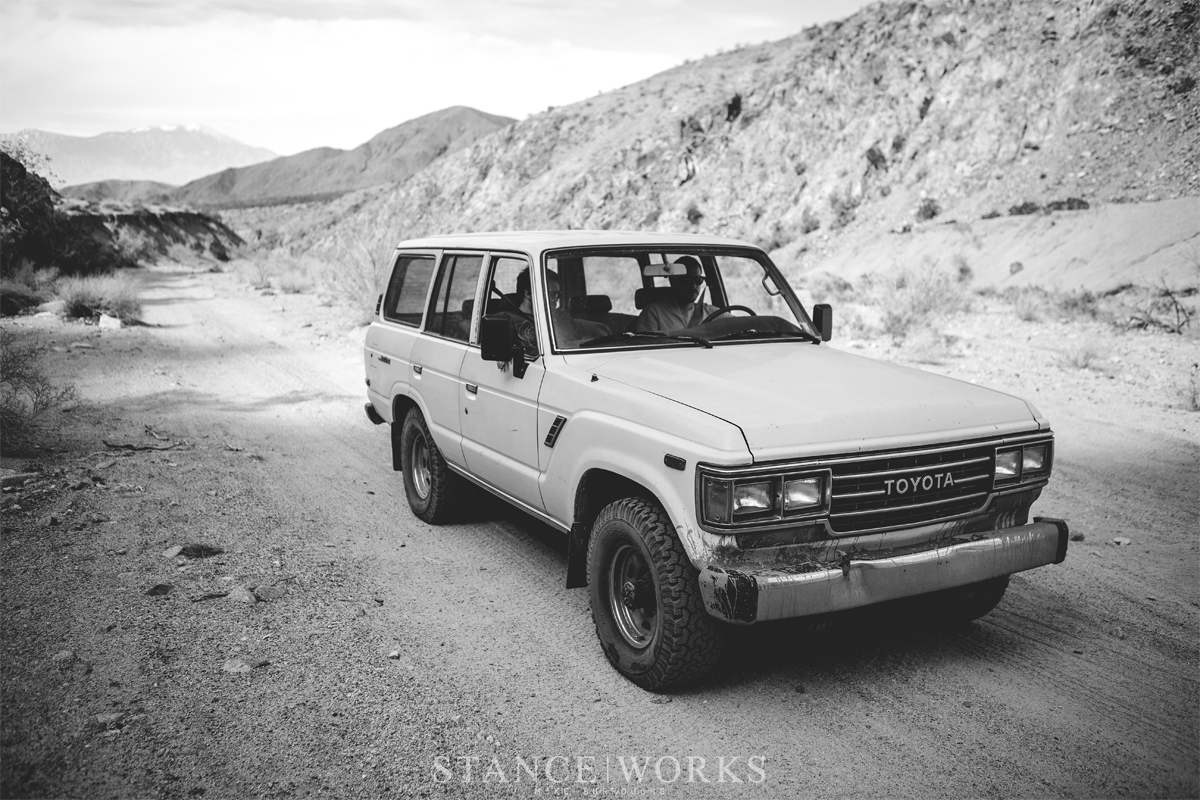 Most of the trail was very easily navigated, although parts and pieces offered obstacles such as rocks and an old collapsed roadway. As for when the road was last in use is anyone's guess - the asphalt has deteriorated and crumbled, hard to distinguish from the natural rocky terrain. A few forks left us scratching our head as for where to head, as we left armed without maps and a GPS that let us down. In the end though, our decisions were correct, and after an hour or two, we had cleared the trail, and found ourselves in the "thick" of the Joshua Tree forest. 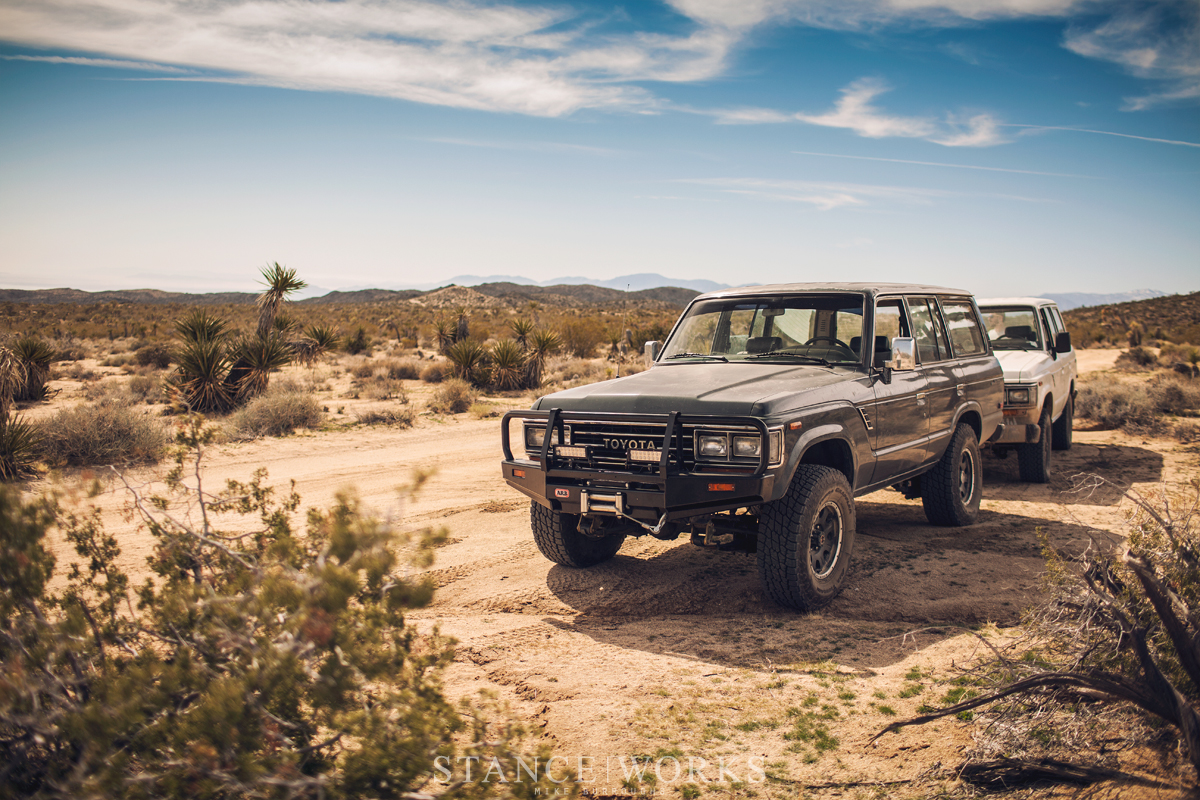 The Joshua Trees scatter the park, thicker in some places than others. Named by Mormon settlers in the mid-1800s, the trees are said to resemble the biblical Joshua, with his hands extended in prayer. As beautiful as they were, the idea was a bit lost on us. Nevertheless, we made our way through, continuing on into the park up Geology Tour road. Massive rock formations popped up across the desert, and offered a great view as we worked through the expanse. Our trail in can be spotted in the distance below. 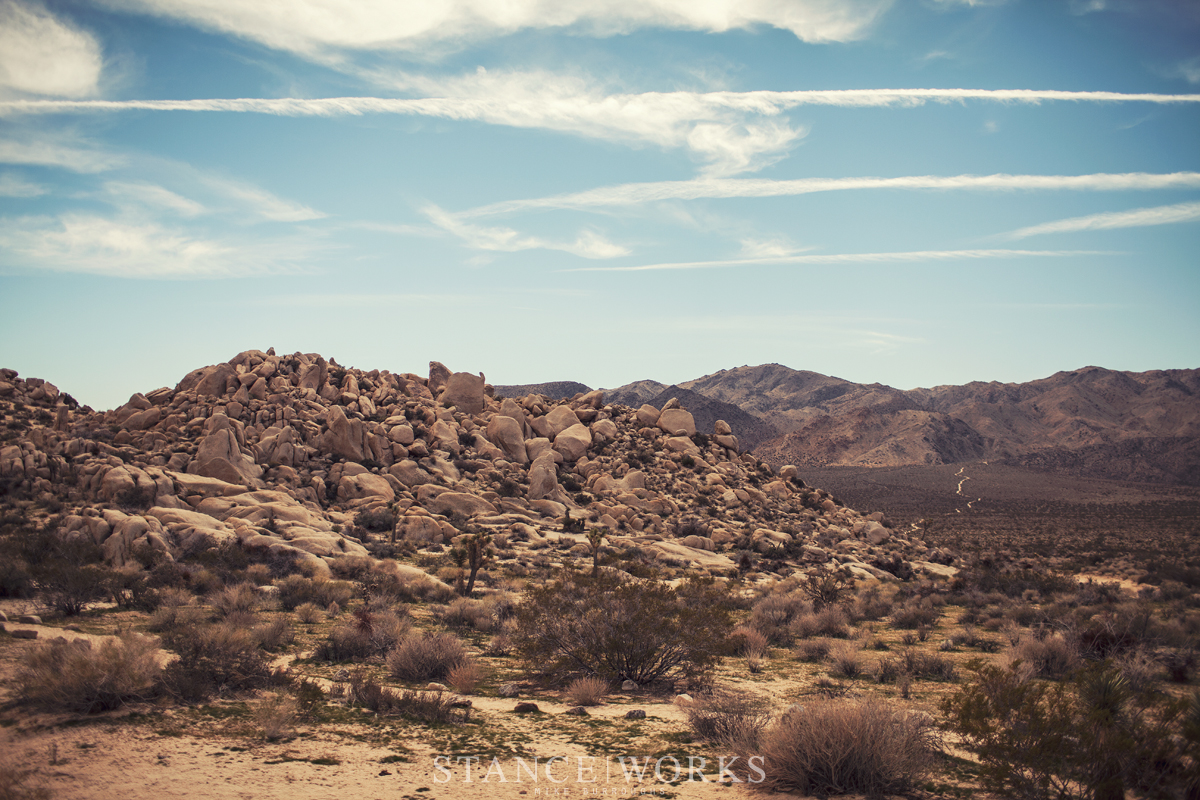 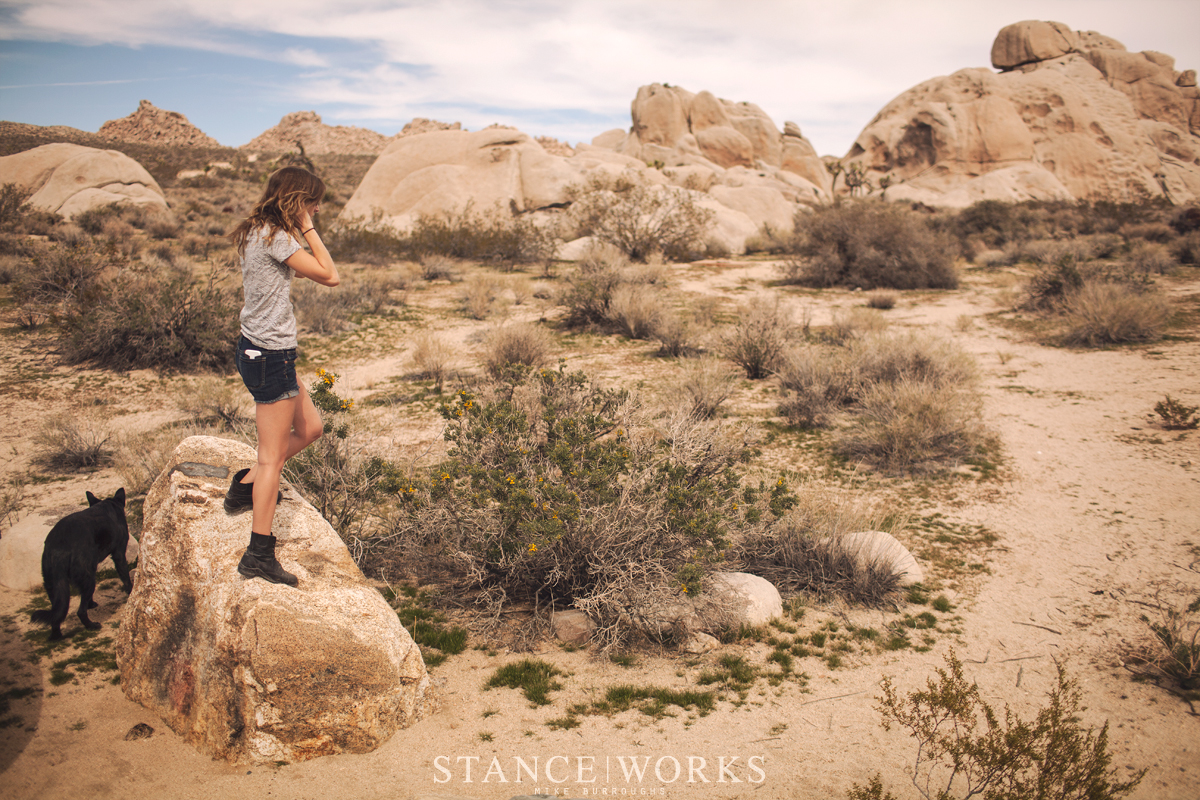 After driving through the park, we found our way to Old Dale Road, which was little more than a dusty path for most of its first half. We crossed the remainder of the flat desert, eventually approaching the Pinto mountains just as we reached the national park's north border. The trail grew rockier, and eventually we diverged, heading up the Brooklyn Mine Trail to our eventual campsite. The path grew rockier and bumpier, slowing our pace rapidly as the sun began to fall in the sky. 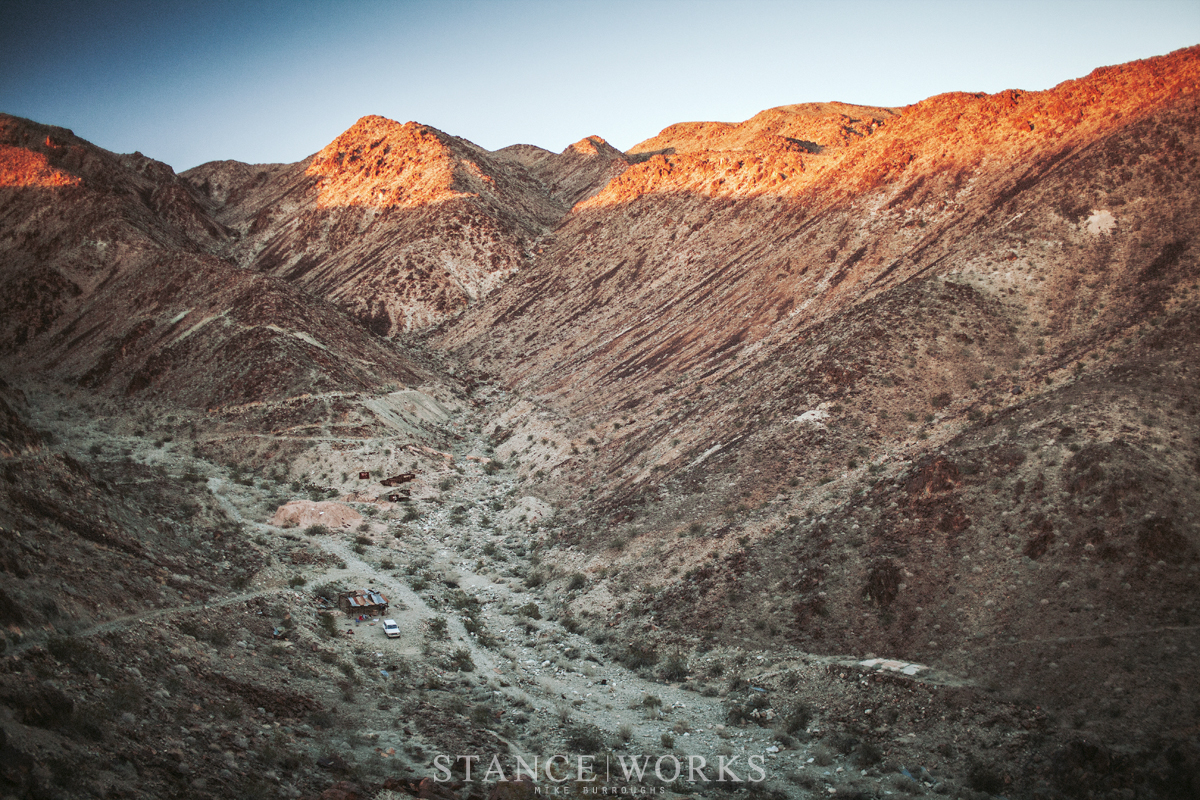 Pictured above, our final destination was an old abandoned mining house, settled deep within the hills, hours away from civilization. The mines within the Pinto Mountains were mostly established between the 1890s and the 1930s as gold mines, and few signs of settlement remain. As one of the better remaining landmarks, the house offered the perfect place to set up camp, and the Brooklyn Mine itself, just nearby, stands as one of the best in the area to explore. 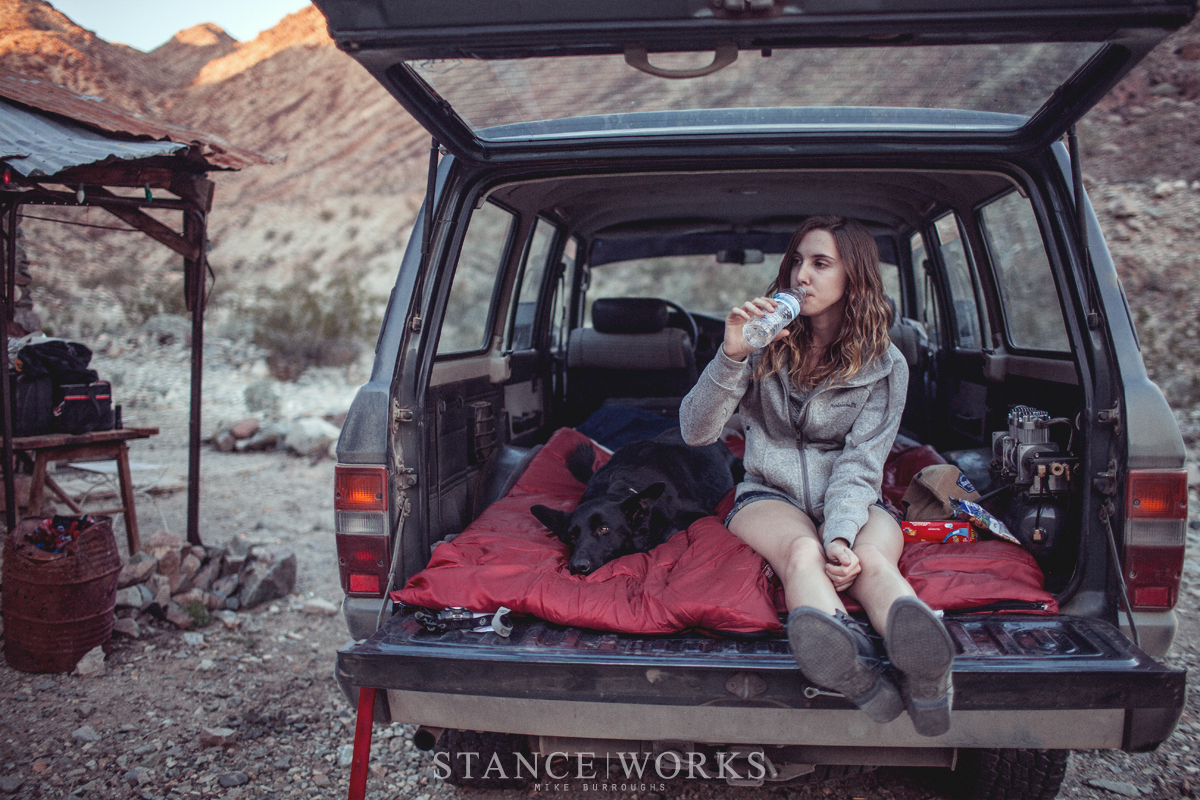 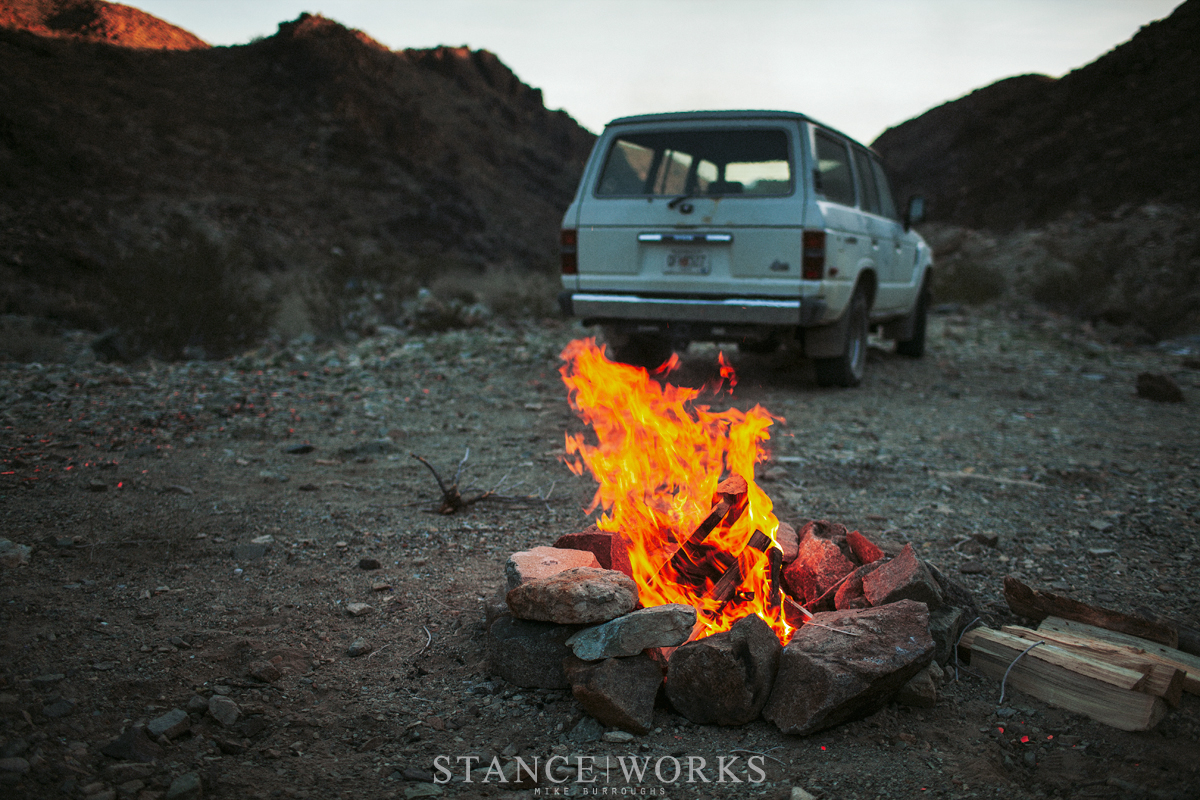 After parking the trucks and unloading, we put together a fire pit and set up camp, knowing the light would disappear before long. With the light fading rapidly, we made an initial trip into the mine, reaching signs that featured skull-and-crossbones, as well as an unnerving warning of "No Air Ahead." 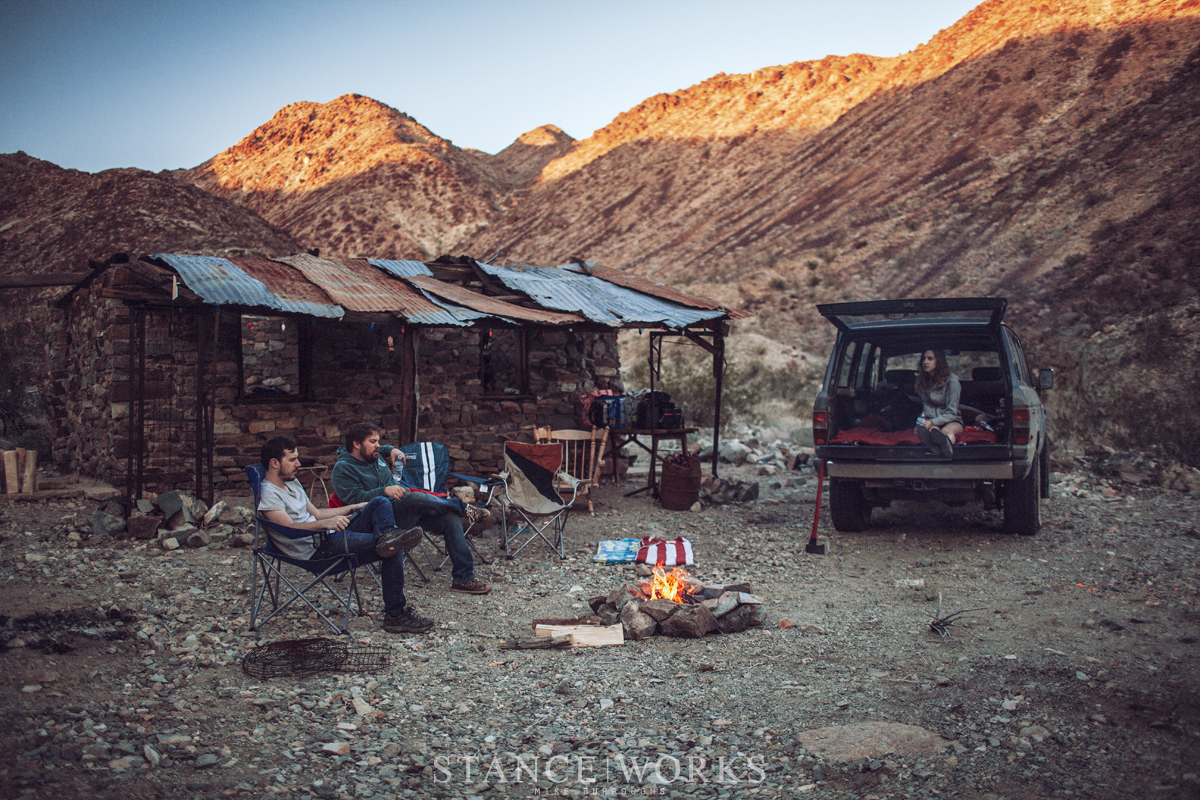 With about 30 minutes of light left, we returned to the crest of the hill to watch the sun set. We hiked out over a few "peaks" to see the valley, which was a beautiful way to cap the evening. Chloe took advantage of the downtime, catching a nap on the rocks as we watched the sun fall. 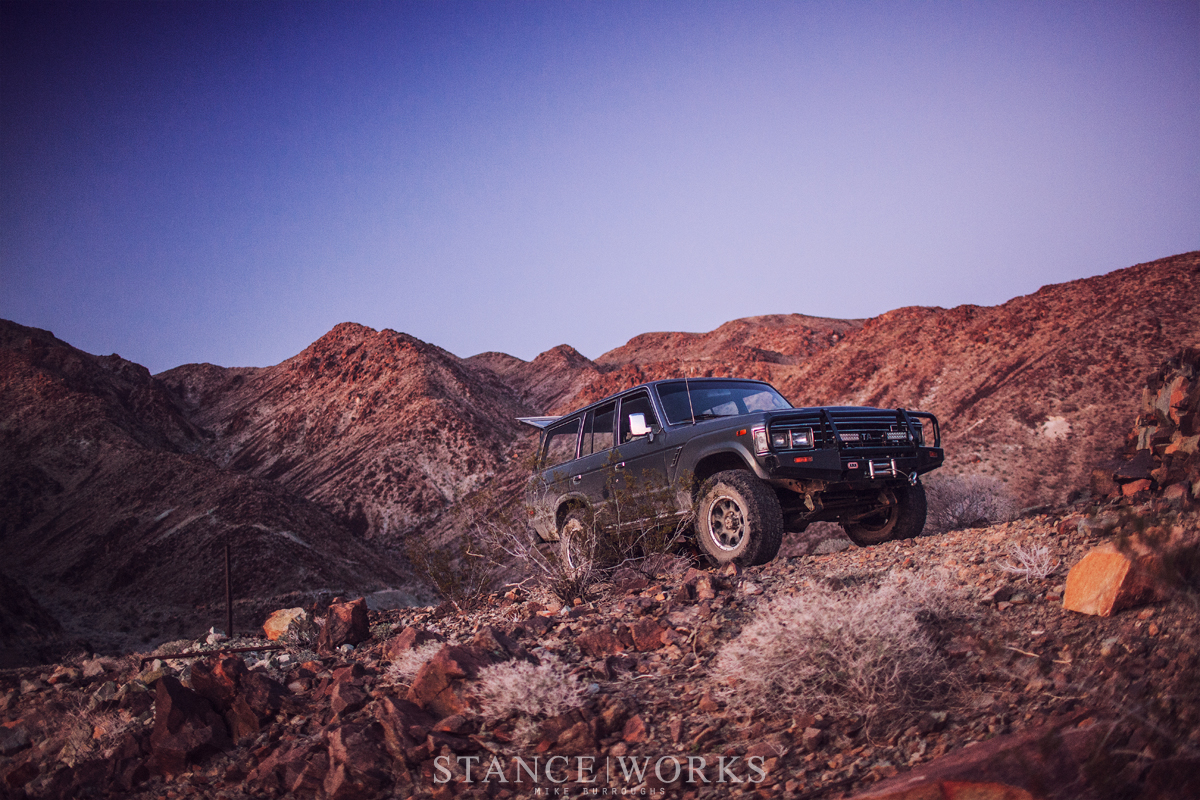 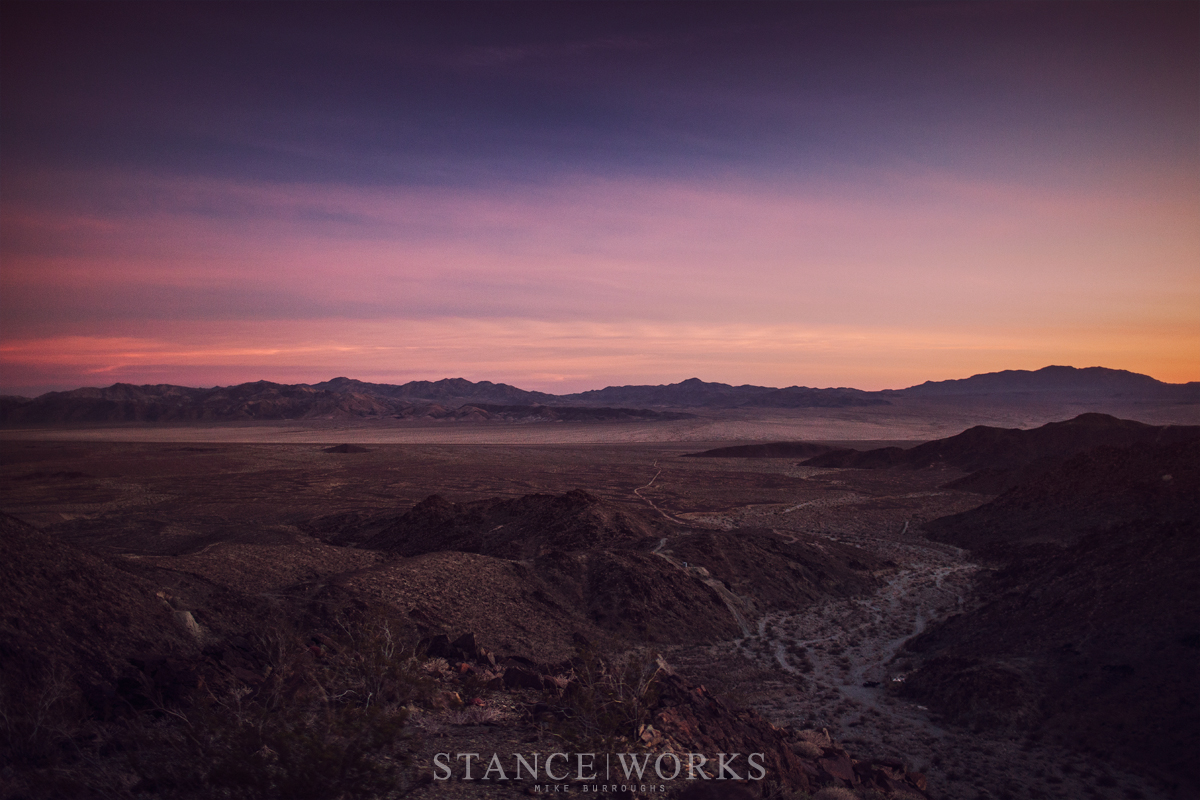 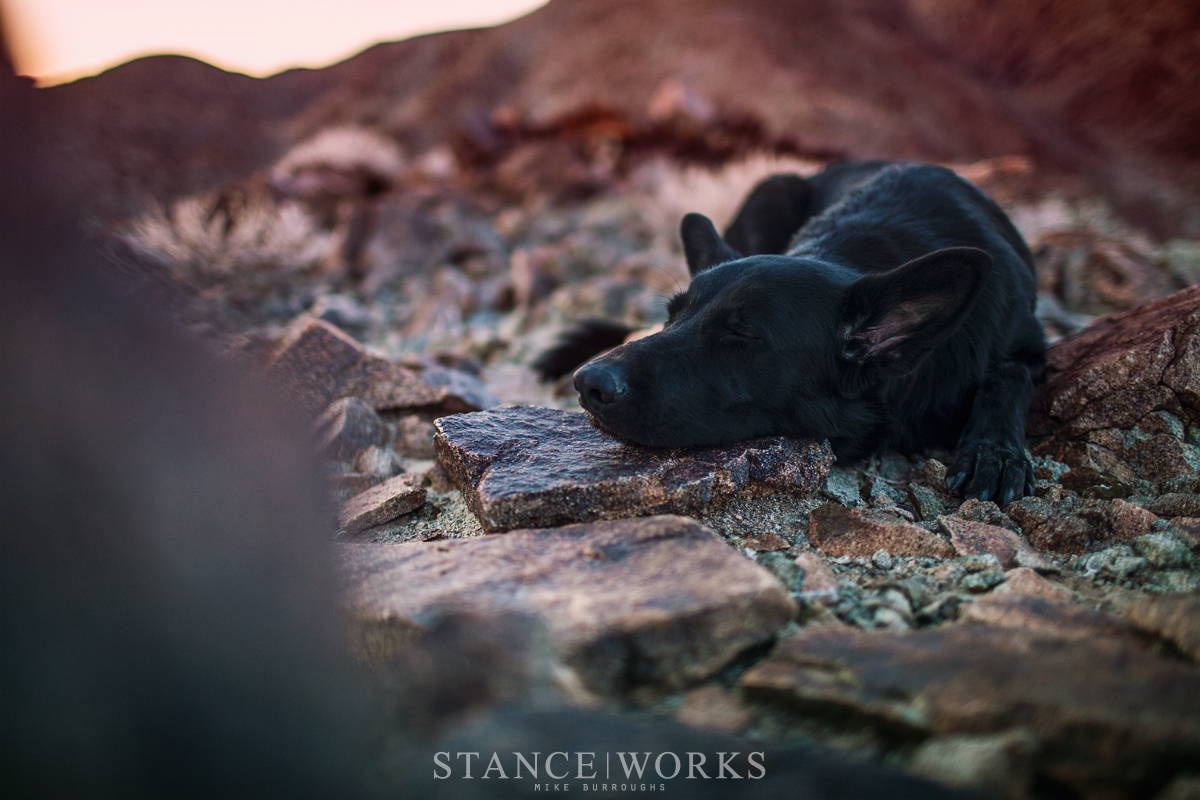 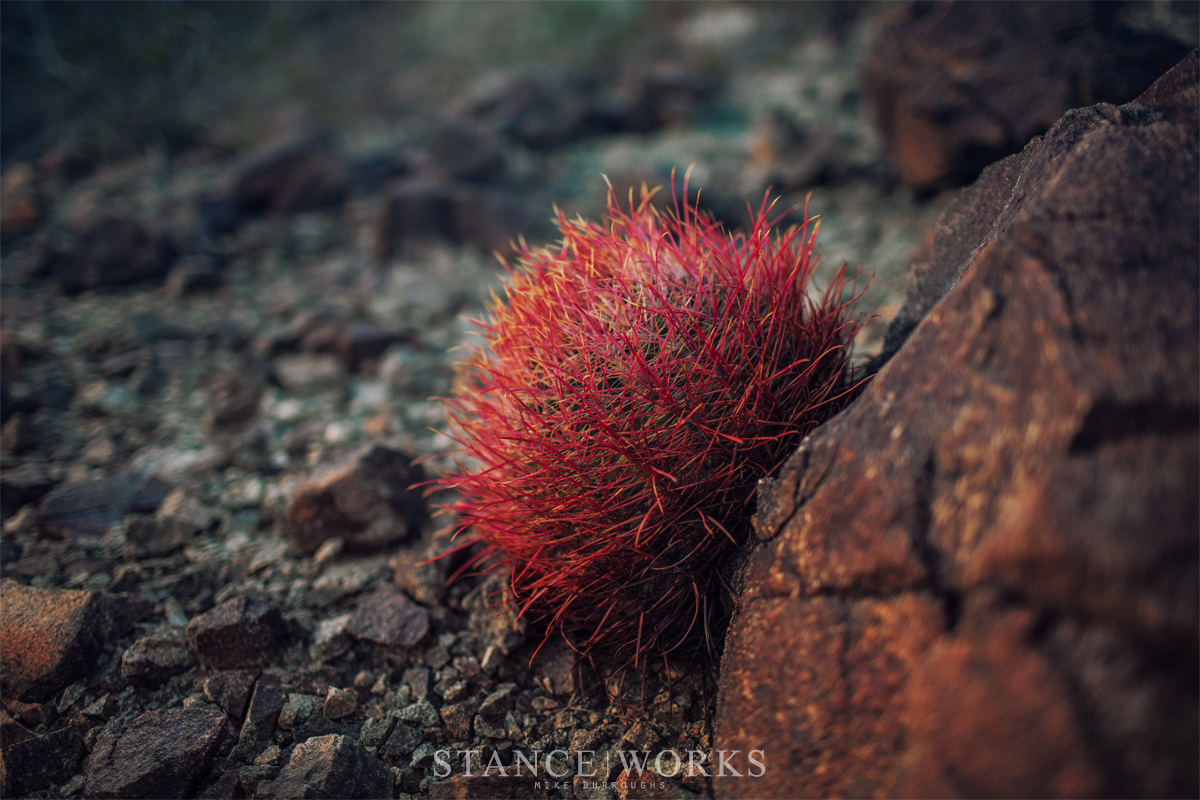 After returning to camp, we stoked the fire and cooked some franks. Drinks wound the evening down as we waited for the moon to fall behind the mountains just as the sun had hours before. The starry night sky was a welcome sight, something I haven't seen much of since leaving home years ago. Our hopes of seeing the Milky Way were dashed, but the surplus of stars came close to making up for it. 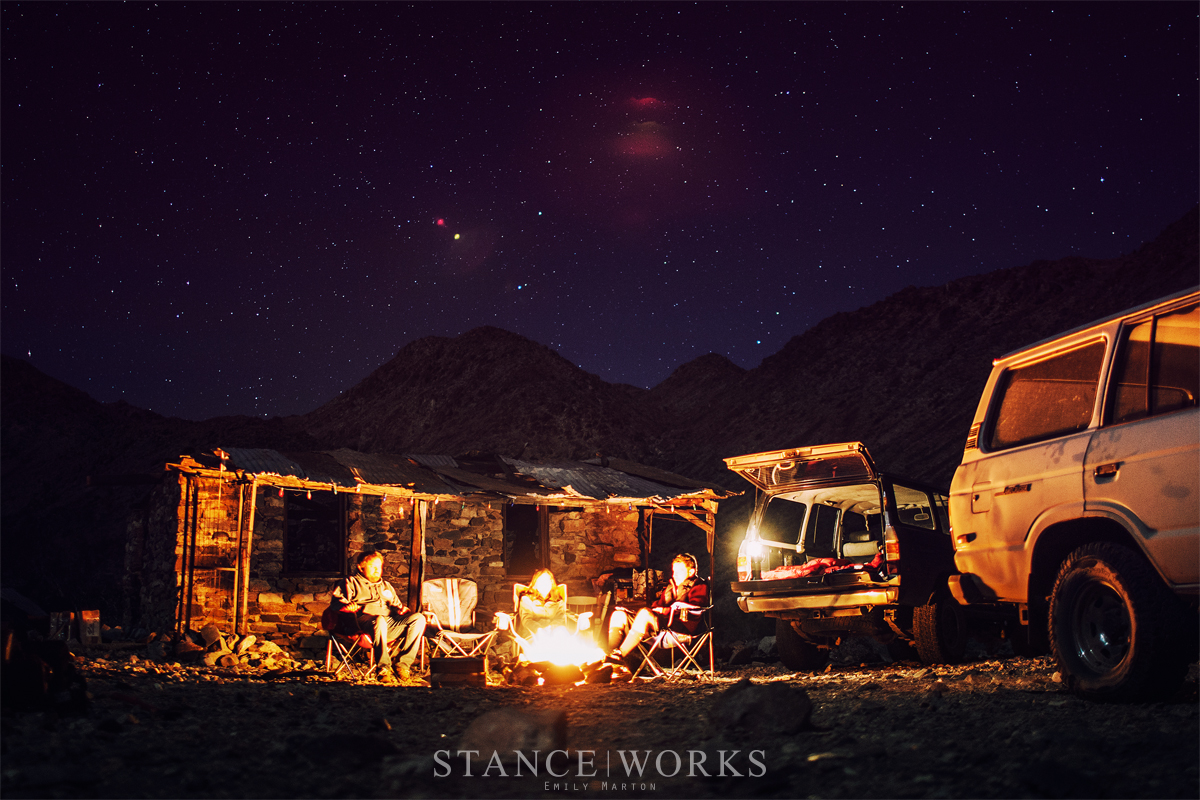 Morning came early, and the FJ62's cargo area offered a great night's sleep for myself and Emily, with our pup Chloe wedged happily between us. Before the sun rose over the mountaintops, we cooked a delicious breakfast: eggs, sausage, and biscuits, easily the highlight of the trip (according to my stomach, at least.) The overnight temps were a dream come true, and the winds that howled through the valley made an ideal soundtrack for a solid night of rest. 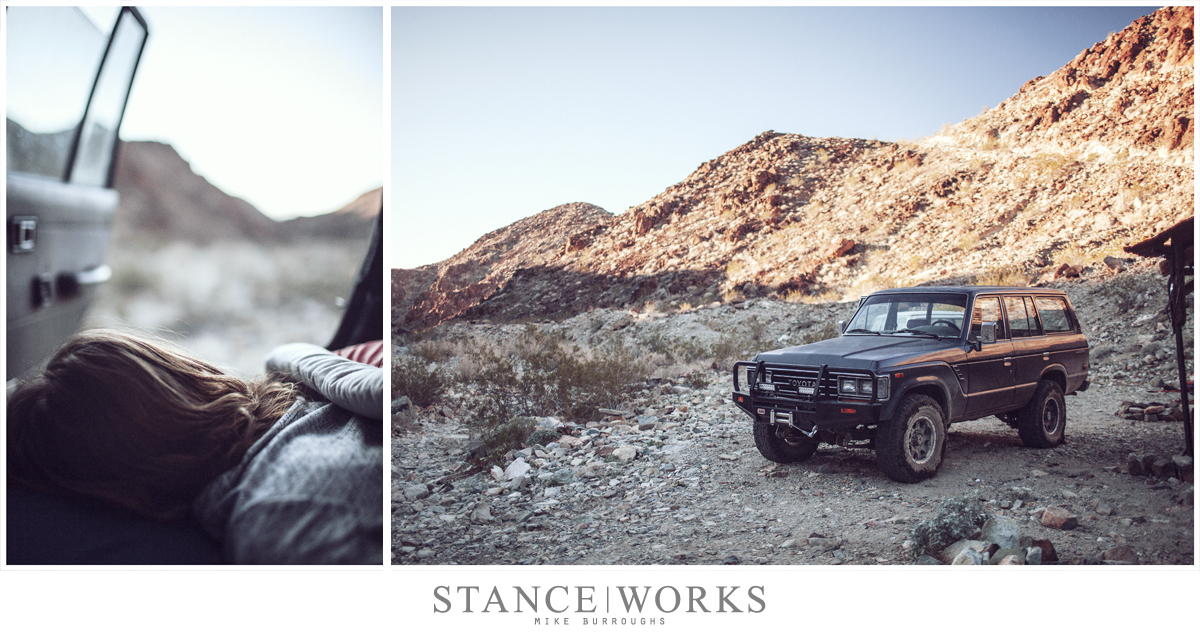 We wasted no time packing and cleaning, making sure to leave the historic site cleaner than when we arrived. With a full day to spend exploring, we headed down an unmarked trail, unaware of where it might take us, and what obstacles lie ahead. 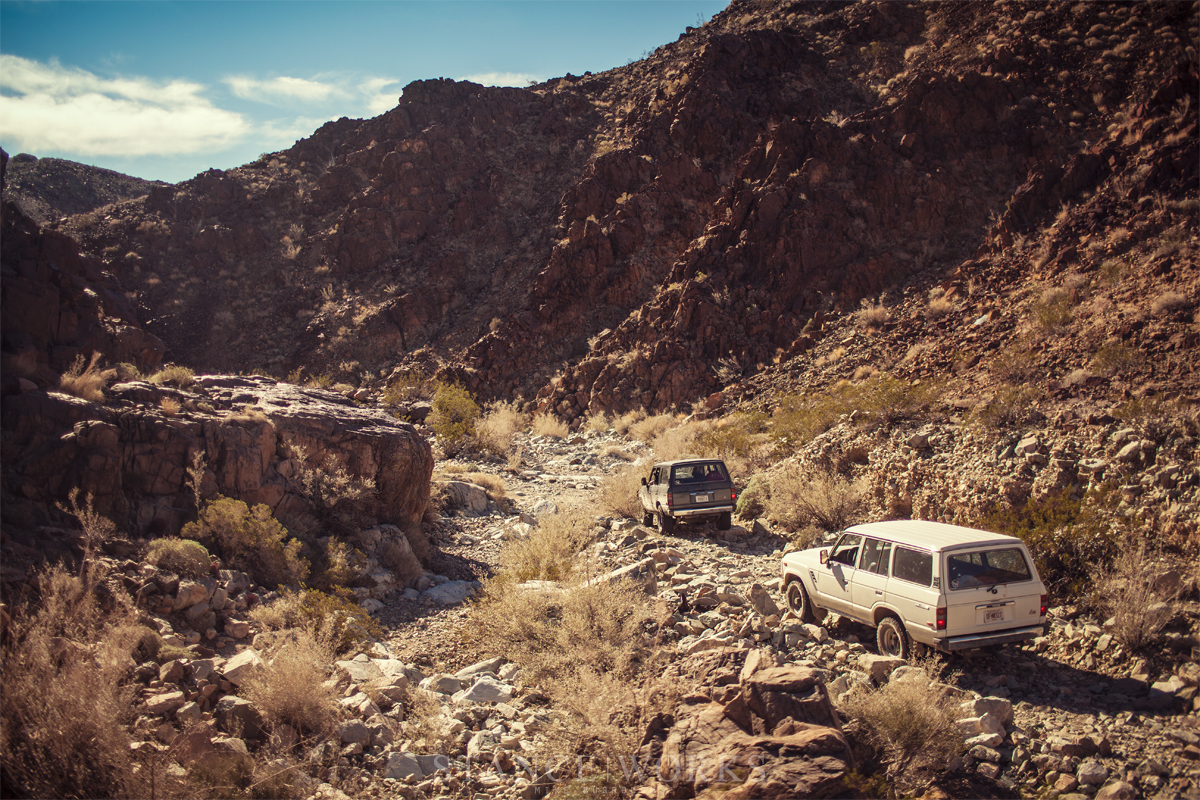 It wasn't long before we discovered another mine, and although it was small in comparison to the Brooklyn Mine, it offered plenty of excitement. Outside of it, a late '30s truck sat in ruins, likely parked for more than a half-century. Ruins of some old buildings sat in desolate piles, decaying under the desert sun. 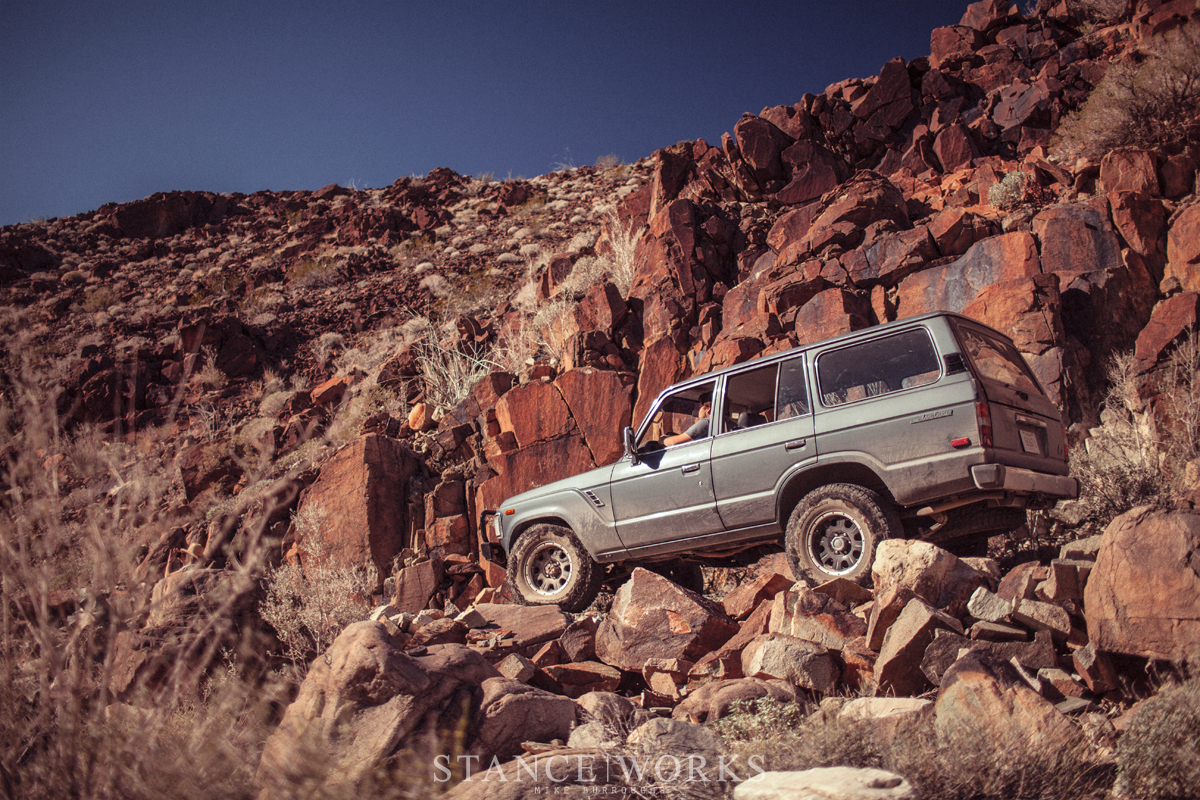 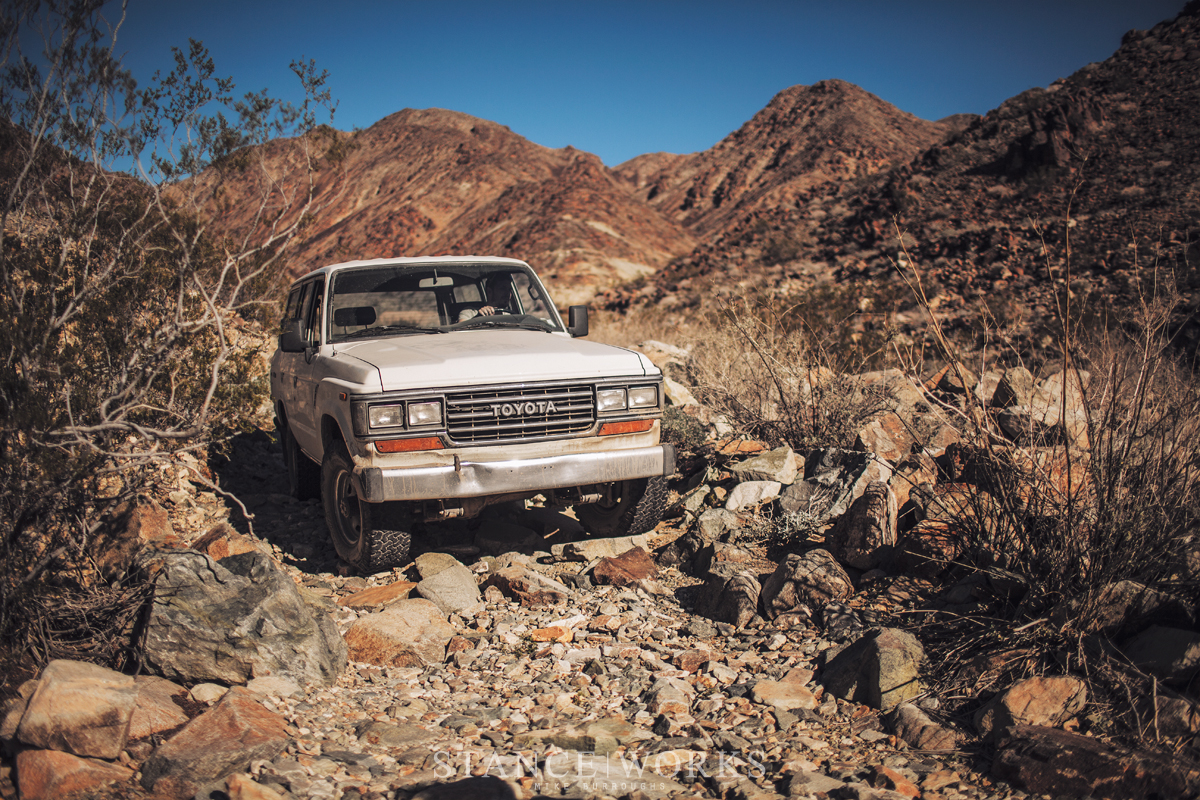 The trail eventually led us back to the main Brooklyn Mine Trail, a fortunate detour that allowed us to leave the main path. Its challenges were perfectly paced, offering one of the best driving stints of the weekend. Boulders of varying sizes offered an array of obstacles to navigate and clear; the difference between my truck and Josh's was made apparent during the tougher segments. The Old Man Emu lift gave the truck some much needed clearance, and the 33" Nitto Terra Grapplers added grip in all the right places. With the tires aired down to around 15 PSI, they clawed their way over rocks and edges. For a brief moment, we wondered if we had gone down a path we had no business traversing, but eventually, both trucks made it through. 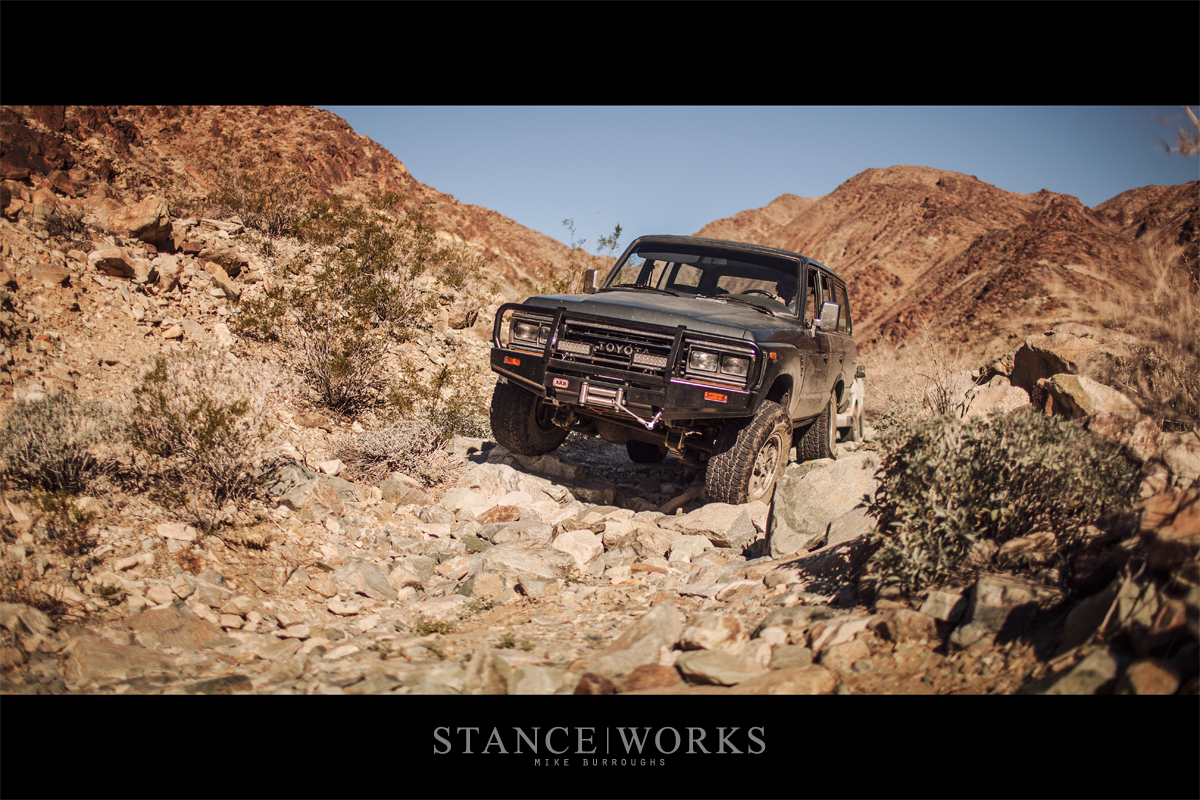 Once back on the main trail, we made our way south, back to the intersection with Old Dale Road. Once there, we continued north, and up into the sandy desert, nearly 80 miles from where our trip began. More mining sites littered the hillsides as we made our way towards highway 62. We stopped to explore a few, although we tried to keep a steady pace as a 2.5-hour drive home awaited us once we returned to tarmac. 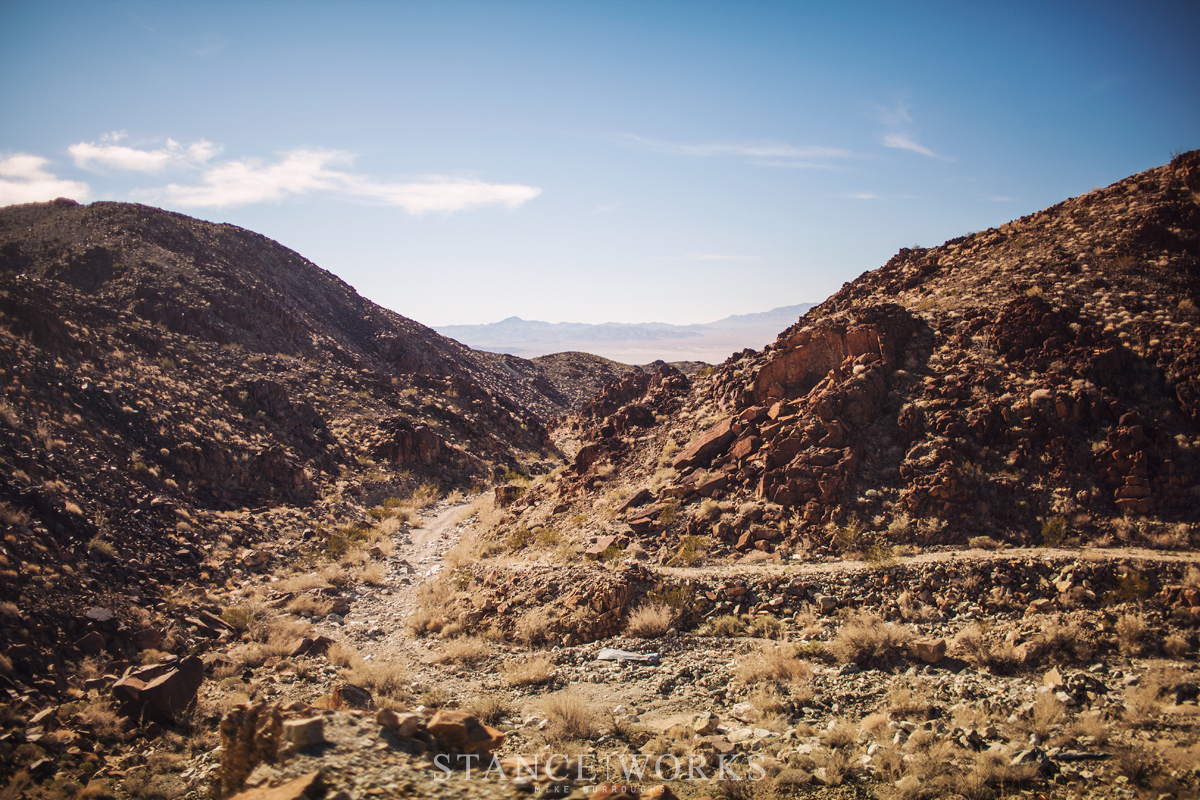 Just off highway 62, we stopped to air up our tires with the onboard Viair system. As we waited for each tire, a dust storm approached on the horizon - worrisome if it weren't for the fact that we were finally ready to hit the road. The weekend as a whole was a resounding success, and a phenomenal escape from the responsibilities and distractions of the real world. Best of all, the weekend offered yet another way to spend quality time behind the wheel. Whether it's on road or off, we're anxious to put our skills to the test, and the world of offroading is yet another welcome challenge. We're now planning our next trip, and come then, we hope to see you on the trail. 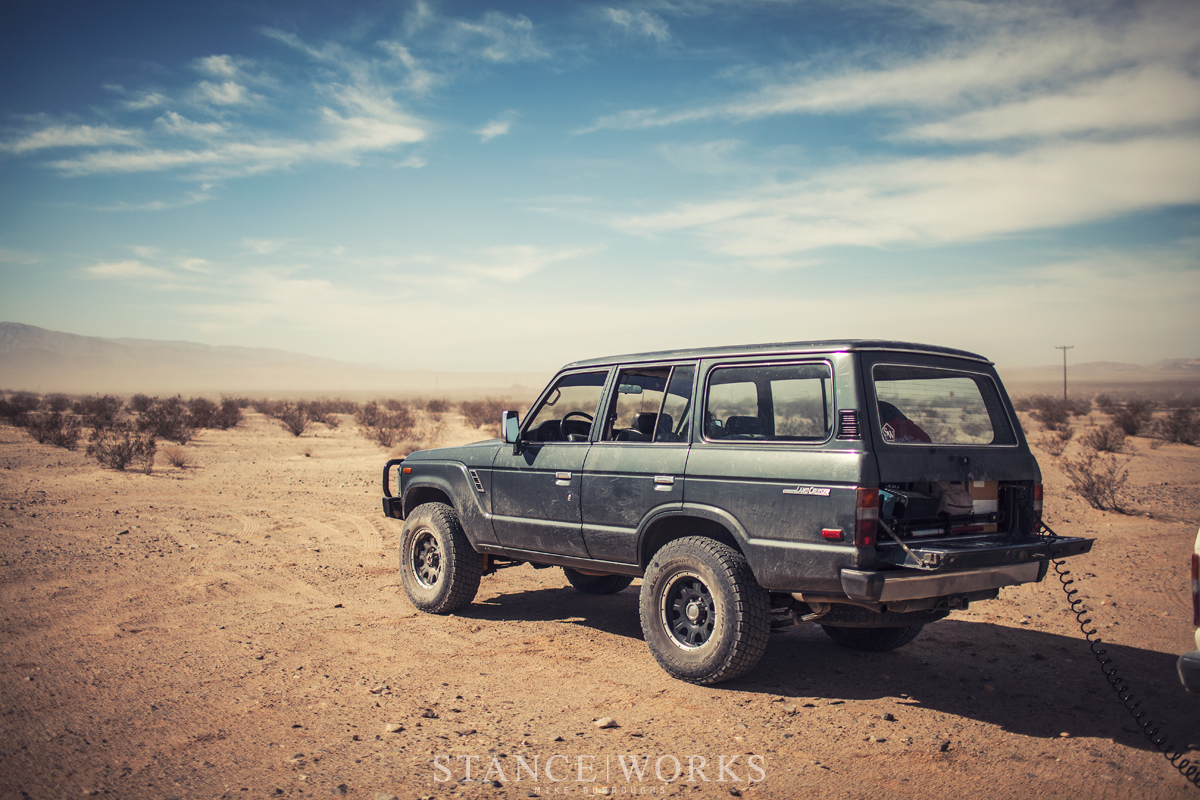