As the American LeMans Series continues, the teams hit the road to return to Mazda Raceway Laguna Seca, a track that they have raced at since the founding of ALMS. The famous track is known for its picturesque beauty as the tarmac snakes through the hillsides and orange dirt of Monterey, California. With an assorted variety of tricky off camber turns, elevation changes, and fast straights, it’s a technical course that is sure to challenge anything the teams can throw at it. With such a diverse collection of turns, finding just the right setup is imperative. The ALMS teams spent the first two days running practice laps in anticipation of qualifying just before Friday’s sunset. Cars from each class raced out into turn two to get a feel for the track, diving back into the pits from time to time to make minor changes as they honed in on the perfect balance. For Team RLL, this was the first time the BMW Z4 GTE cars would fly down the Rahal straight and descend into the iconic Corkscrew. The M3s have had success at this circuit in the past, but it was time now to compile data for the new Z4s and see if they had what it takes to continue BMW’s podium run following their 1-2 finish on the streets of Long Beach. 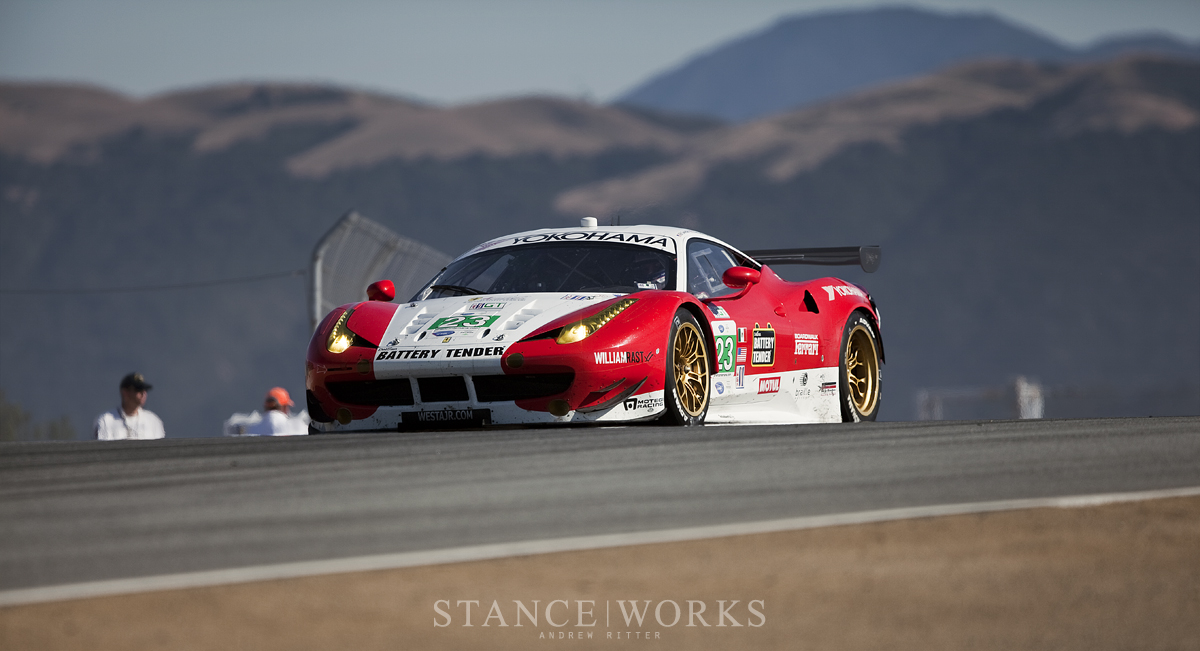 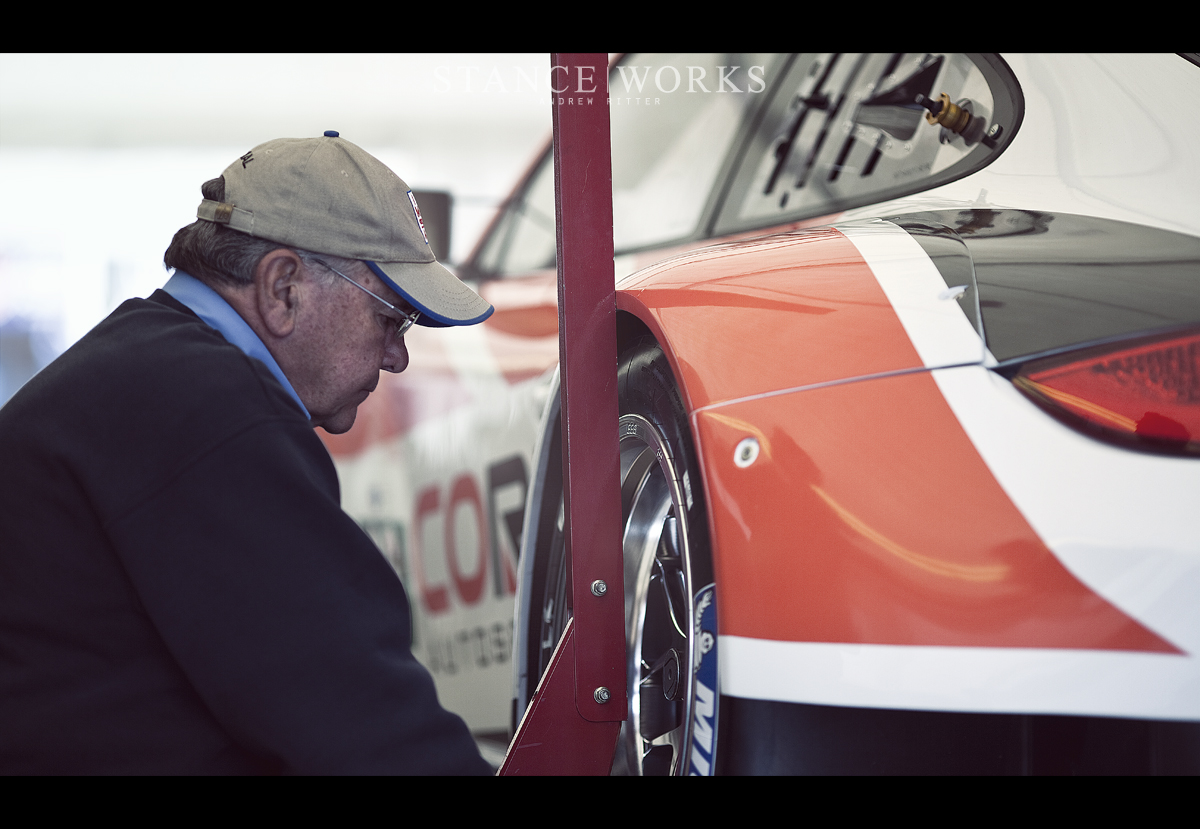 Thursday morning started off under the blanket of fog that often coats the coastal terrain of Monterey, California. With colder spring temperatures looming, the track slowly began to come to life. The first race weekend of the season lay just ahead and the anticipation grew among contenders and spectators. Car carriers were unloaded while toolboxes squeaked and shook as they were pushed into the paddock garages that line the straight. I was back at the track that I had raced so many times on my Playstation, and the corners that I’ve spent so much time exploring as a photographer. There’s something about the atmosphere and hilly landscapes that holds an essence of racing from years past. I hiked out to the end of the hairpin just in time to watch as the track roared to life. The prototypes lined up and exited from the pits. The distinguishable growl of the GT class echoed off the hillside as cars fired up. It’s a rumble that you can feel as they approach and with that, I was back in race mode. 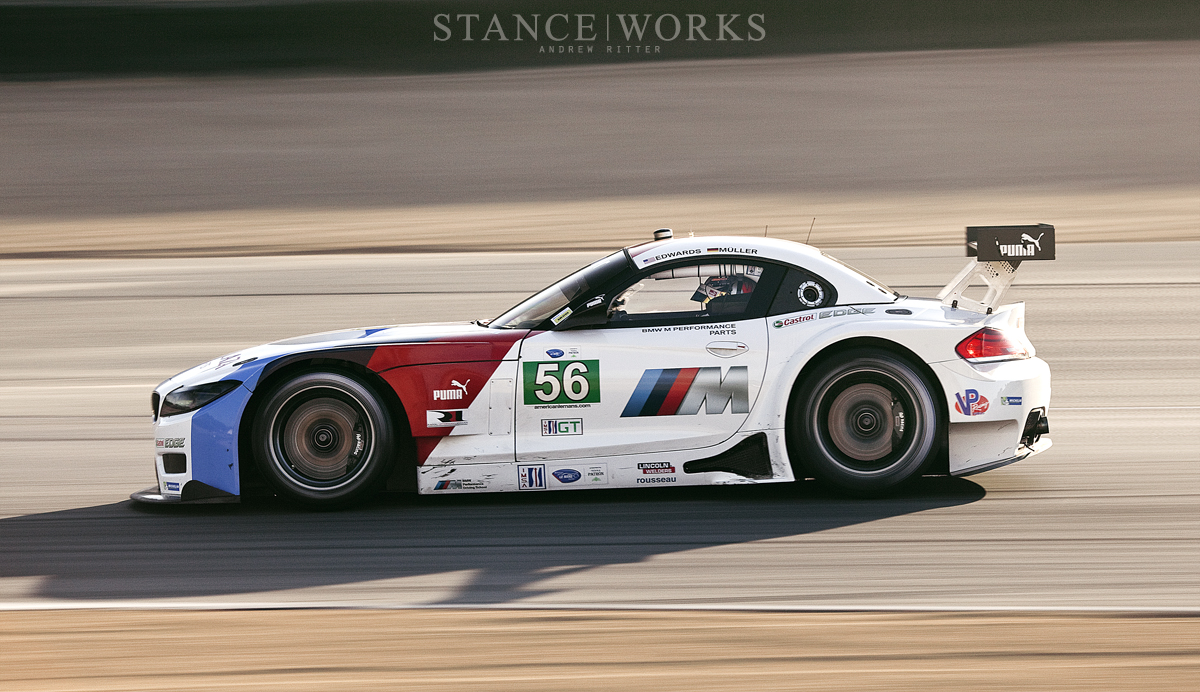 My shutter clicked away as the drivers reacquainted themselves with the course. The GT class looked great with the familiar teams making an appearance. The Ferraris howled in their usual Italian tones while the American muscle of the Viper and Corvette teams shook the earth. Core Autosport, a team with a strong presence in the other classes, made its debut in the GT class with their sleek white Porsche entry; joining the other GT Porsches of Team Falken and Paul Miller Racing. With the Porsche Factory star, Patrick Long, and three-time Le Mans class winner, Tom Kimber-Smith, behind the wheel of the Core Autosport car, I was interested to see how they compared to the rest of the strong GT class. 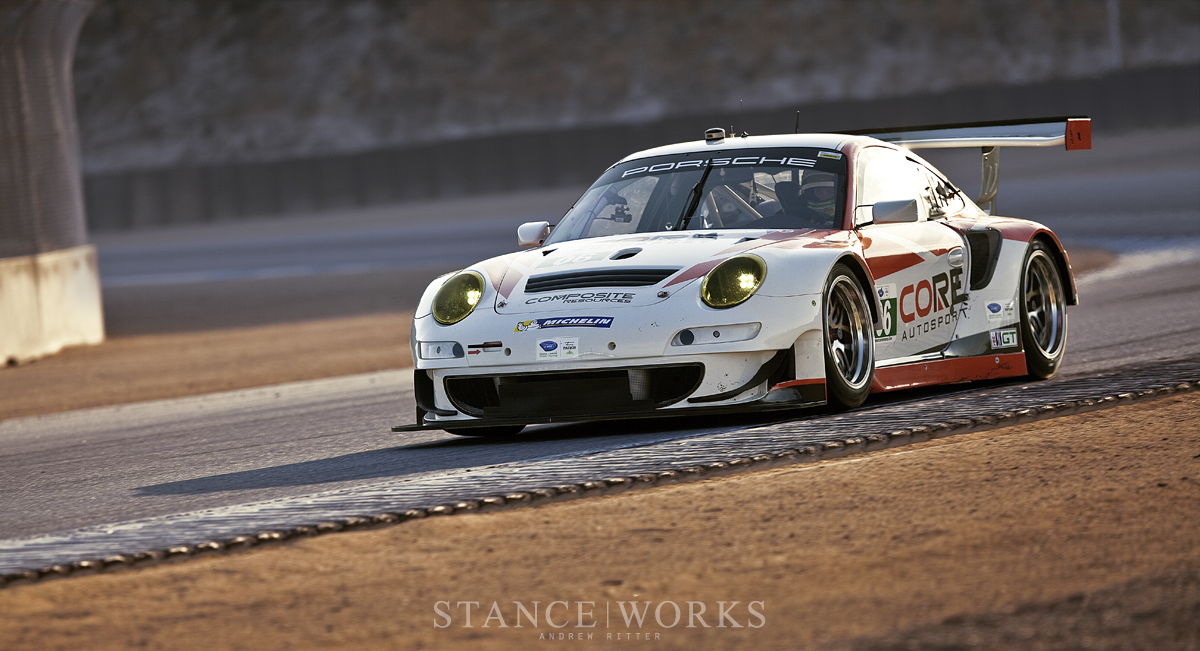 Following their first place finish at Long Beach, Bill Auberlen and Maxime Martin were tied for the lead in Drivers points. They would team up once again to man the Frost Black No. 55 Z4 GTE at Mazda Raceway Laguna Seca. Joey Hand took the weekend off after finishing in a career-best, 7th place for the opening race of the DTM season at Hockenheim. John Edwards would take Hand’s place and expressed his excitement to strap back into the Z4’s driver seat with his eyes set on the podium. Together with Dirk Müller, Edwards would spend the weekend in the Alpine White No. 56 Z4 GTE. These practice sessions were important for Team RLL. Data and testing needed to be collected so they could be ready for race day. Many of the other GT cars had already spent time on this track last year and experience always proves to be a major benefit on tracks as technical as Laguna Seca. The sun fell behind the hills as the hour and a half practice session came to a close. Teams packed up and returned to their hotels for a night’s rest. 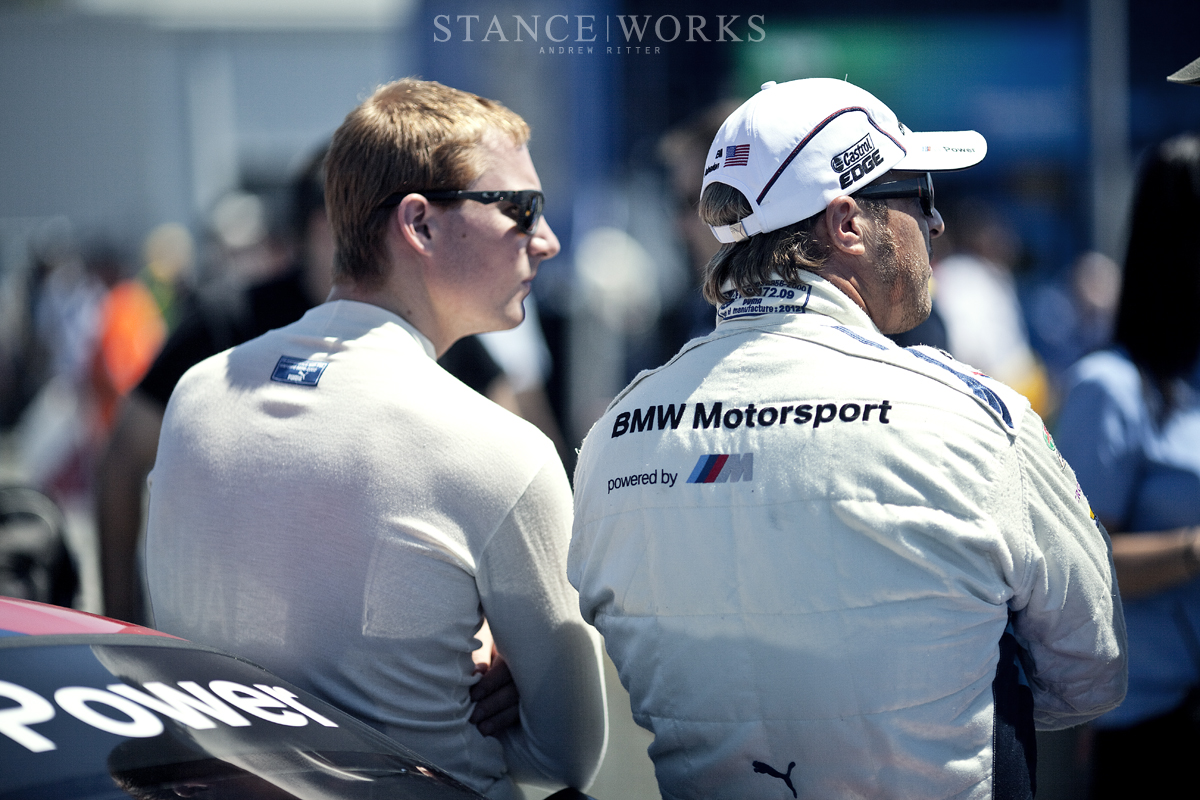 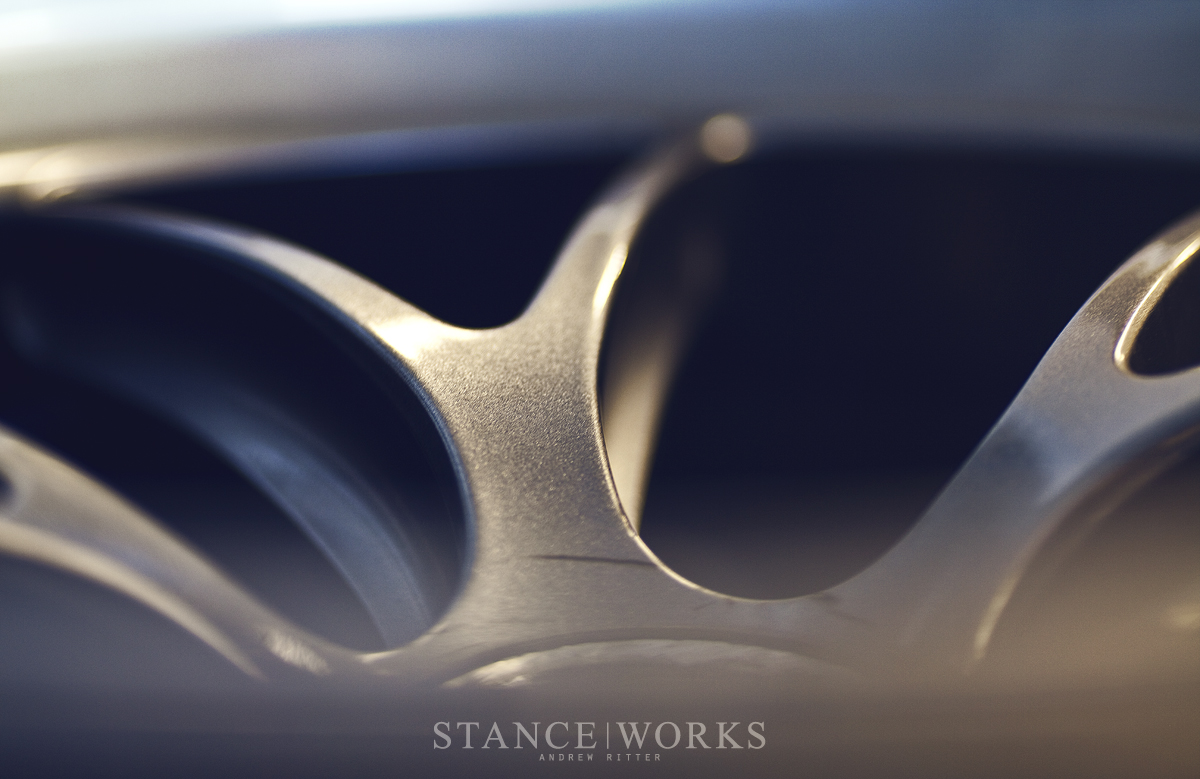 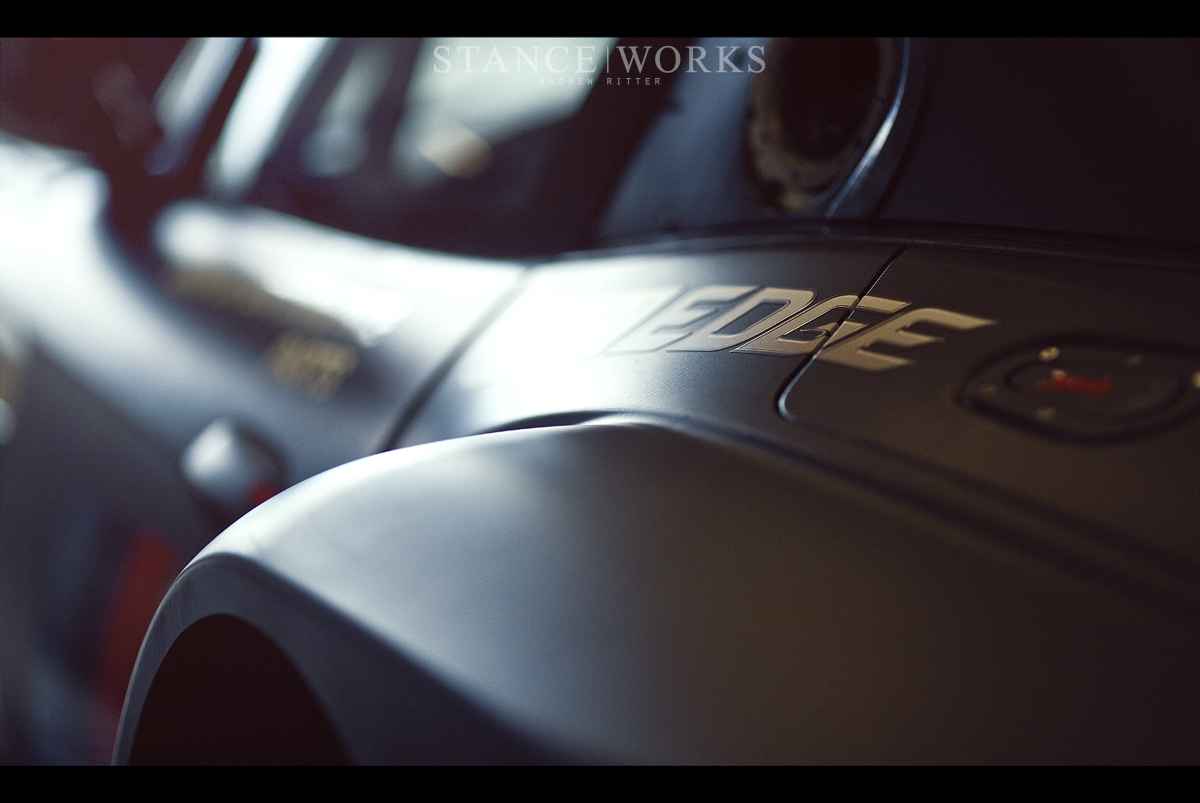 Once again, clouds rolled in off the ocean and held in the cold temperatures of Friday morning. The cars returned to the course for final testing. Alignments were changed, tire pressures were tweaked, and drivers continued their dance through the mountain landscape. The cars were falling into a groove as the teams refined their setups. Team RLL was feeling positive about their findings thus far with qualifying just ahead of them. Their best practice laps were among the top in the class for both Z4s along with the Core Autosport Porsche and the No. 3 Corvette. The California sun finally managed to burn through the marine layer as teams sat down for lunch. As soon as the clouds parted ways, the temperature began to rise. The hot sun on the black asphalt threw another challenge at the teams in the paddocks. The higher temperatures meant that tire settings would need to be reconsidered if they wanted to snatch a good position in qualifying. As Friday evening approached, teams returned to the pits to ready the cars for qualifying. With just 15 minutes to prove their skills, drivers had to fight hard for the pole position. 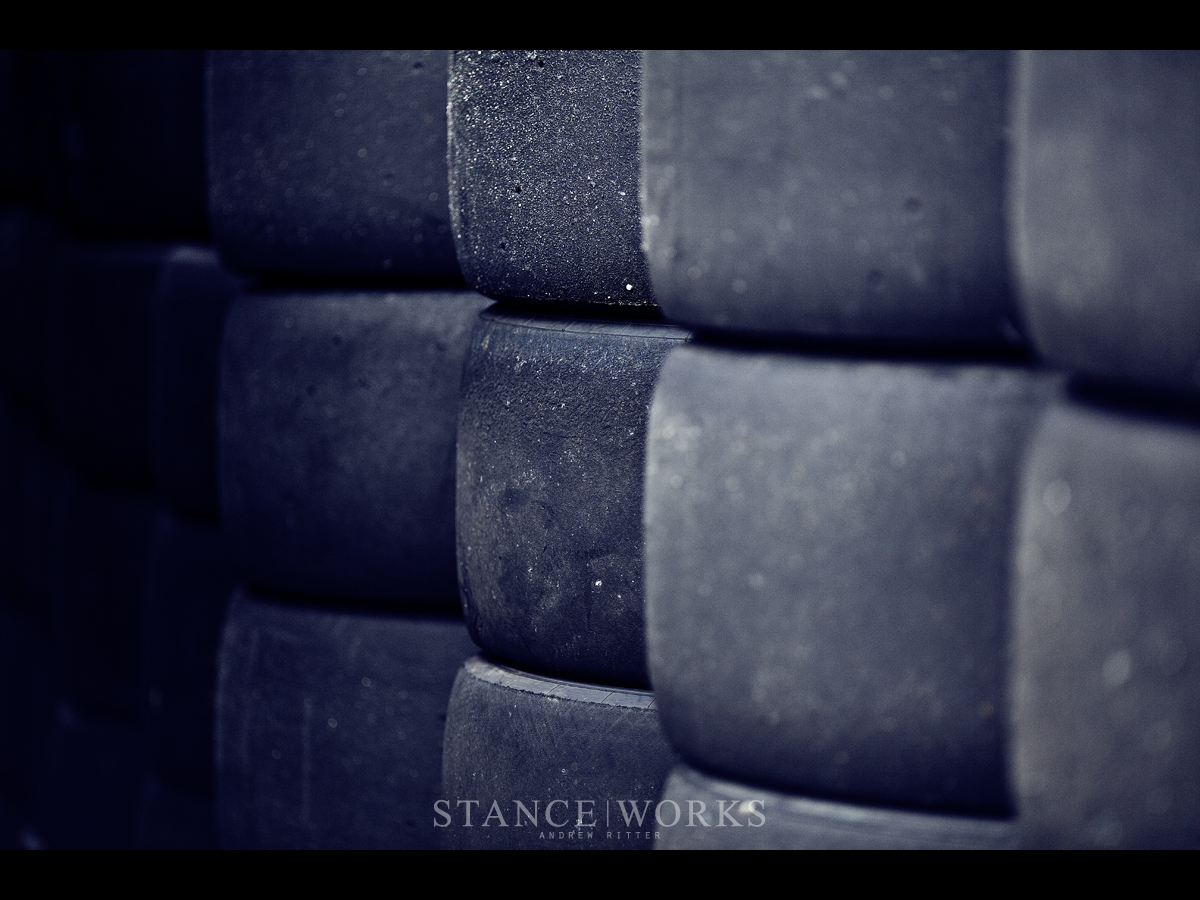 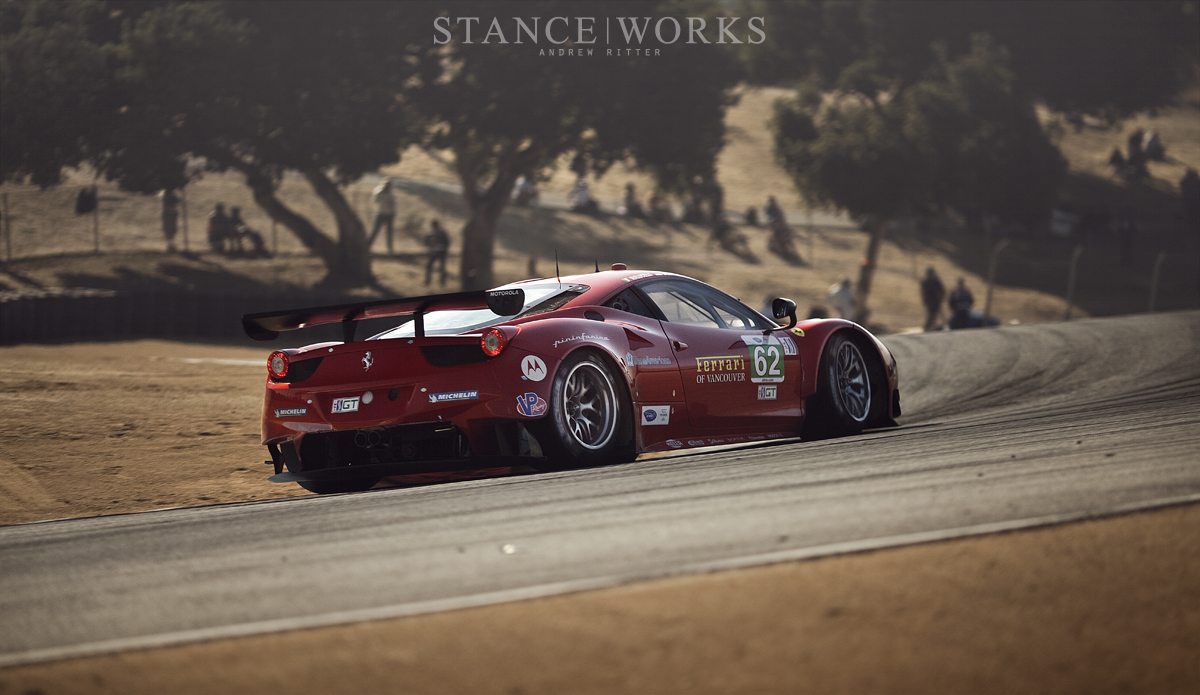 The GT teams seemed to set their best lap times around their 6th or 7th lap once the tires had gotten a chance to reach the right temperature. On his 7th lap, Bill Auberlain secured a 5th place position on Saturday’s grid with a 1:22.990, less than 3 tenths of a second behind the pole position leader, the Risi Competizione Ferrari 458. Despite setting great lap times in practice, the No. 56 car settled into the 8th position. However, Dirk Müller remained confident stating, “We really looked good in today’s two practice sessions, but perhaps we were just too conservative in qualifying. I certainly don’t like to be P8, but I know the No. 56 machine is ready to race tomorrow.” The Falken Porsche and No. 4 Corvette sat just ahead of the No. 55 car in standings. With just fractions of a second separating the leaders of the class, it was clear that the GT class would be competitive and exciting yet again. 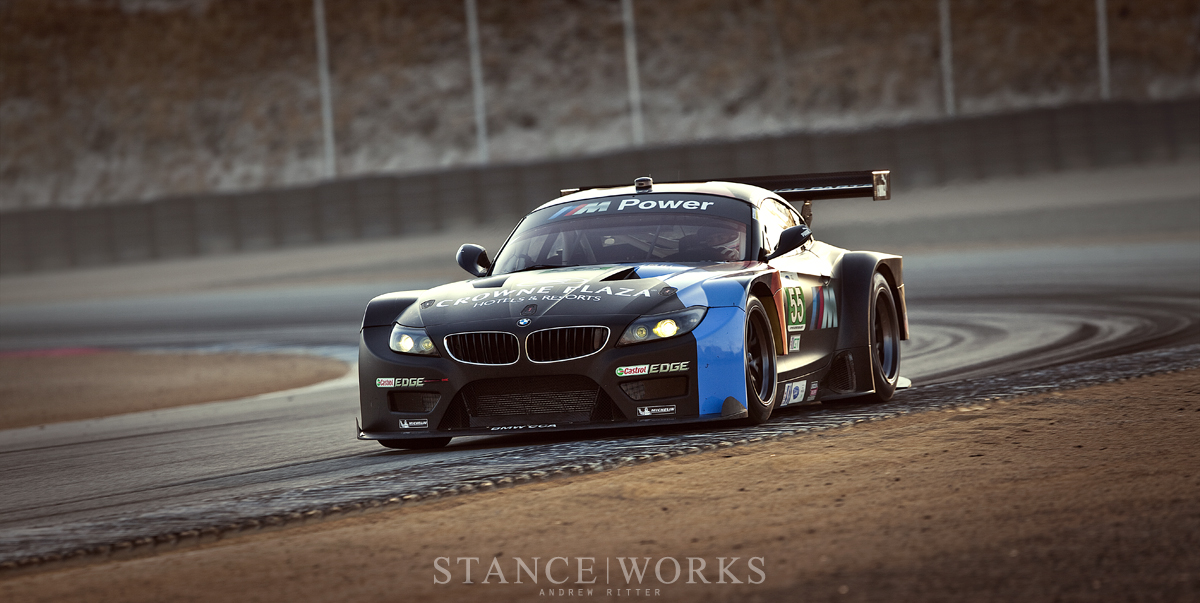 Race day brought a new life to the infield. A paddock that was rather quiet through the practice days was now bustling with thousands of spectators, eager to see their favorite cars conquer the hilly race course. With the new crowds also came a change in weather. Hotter temperatures had settled into the mountains and fended off the cold ocean air that had kept the track chilly over the past few days. Teams would have to prepare for even warmer temperatures for race day as the sun baked the circuit. This race would be a 4 hour stint around the 2.238 miles and it promised to be a challenging one. At 3:30PM the green flag waved and they were off. 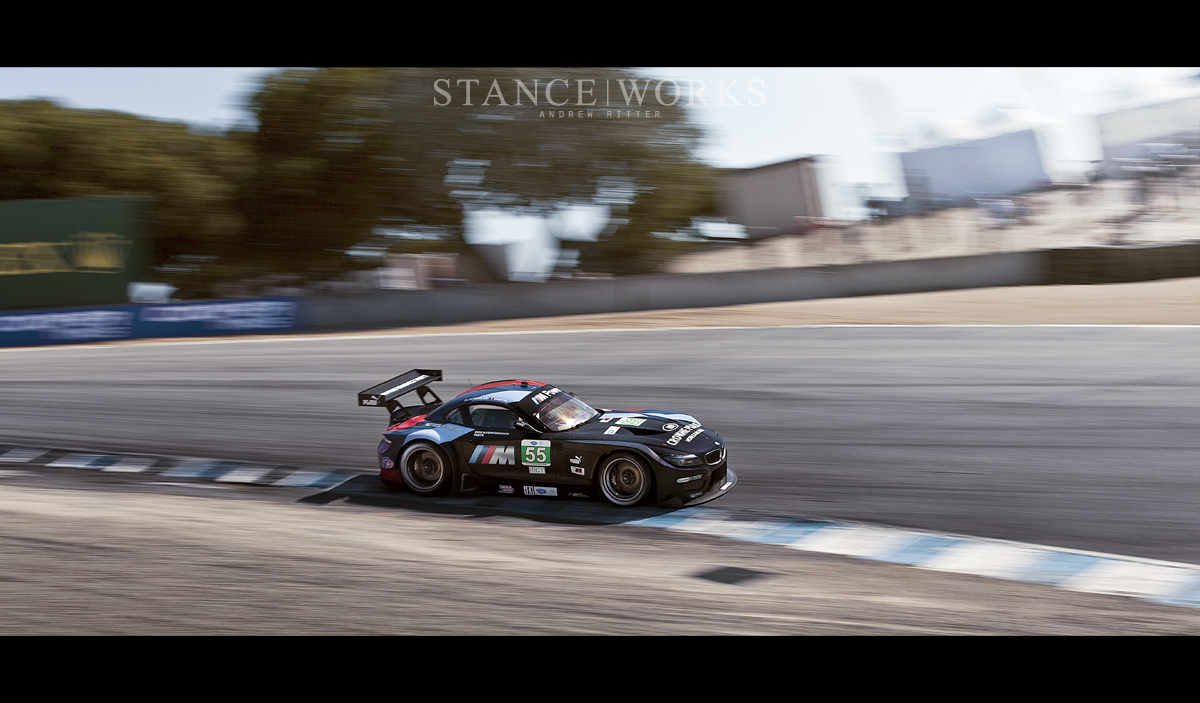 Only one minute into the race, one of the GTC Porsches went off at Turn 6, bringing the race’s first yellow flag. With the elevation changes, rocky terrain, dusty corners, and tough competition, Laguna Seca is a track that will challenge even the best drivers. Throughout the course of the race, yellow flags were waved as cars took damage in the collisions of apex battles and off-course excursions. Requiring pit timing consideration, the yellow flags bring about a game of strategy as the race teams carefully decide when to call their cars in for fuel, tire, and driver changes with as little detriment to their race position as possible. 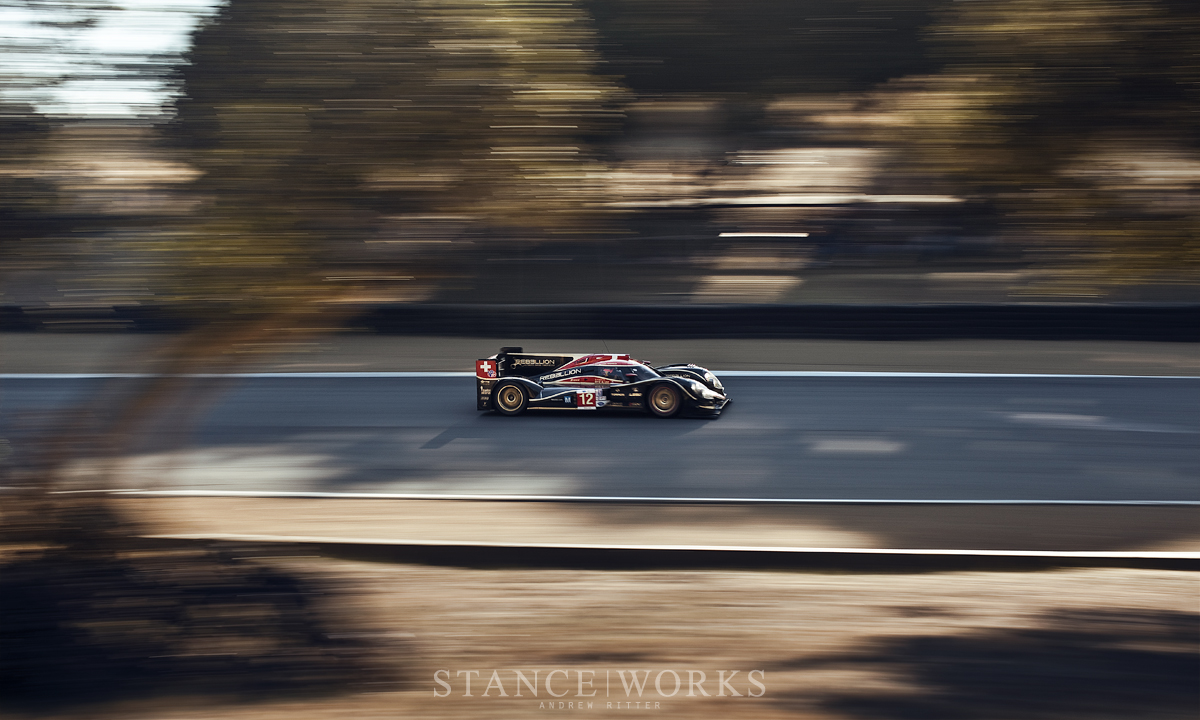 The Risi Competizione Ferrari 458 that had started the race at pole position fell back in the class as it fell victim to the new pit lane speed system that ALMS had put into effect this year at Sebring. Receiving 3 pit speed violations that resulted in stop and go penalties caused them to fall back in the competitive GT class. The Core Autosport Porsche suffered similar difficulties as it fought hard in the GT ranks. Coming into contact with a prototype car and later spinning in turn six was enough to end their debut race in 7th place. As green flags were drawn to mark the end of the yellow caution periods, drivers did their best to avoid the debris kicked up on the track and the chaotic traffic of various classes battling for first place. Auberlen drove the No. 55 to third place in the early laps of the race and remained there until he sustained damage to the rear bumper. A quick stop in the pits to repair the damage of track battles set him back one lap, but Bill was quick to get out on the track, sans bumper, and regain his position. Unfortunately, the No. 55 car would suffer diff damage shortly after Maxime took control of the car. The damage was enough to take the Z4 out of the running on lap 83. 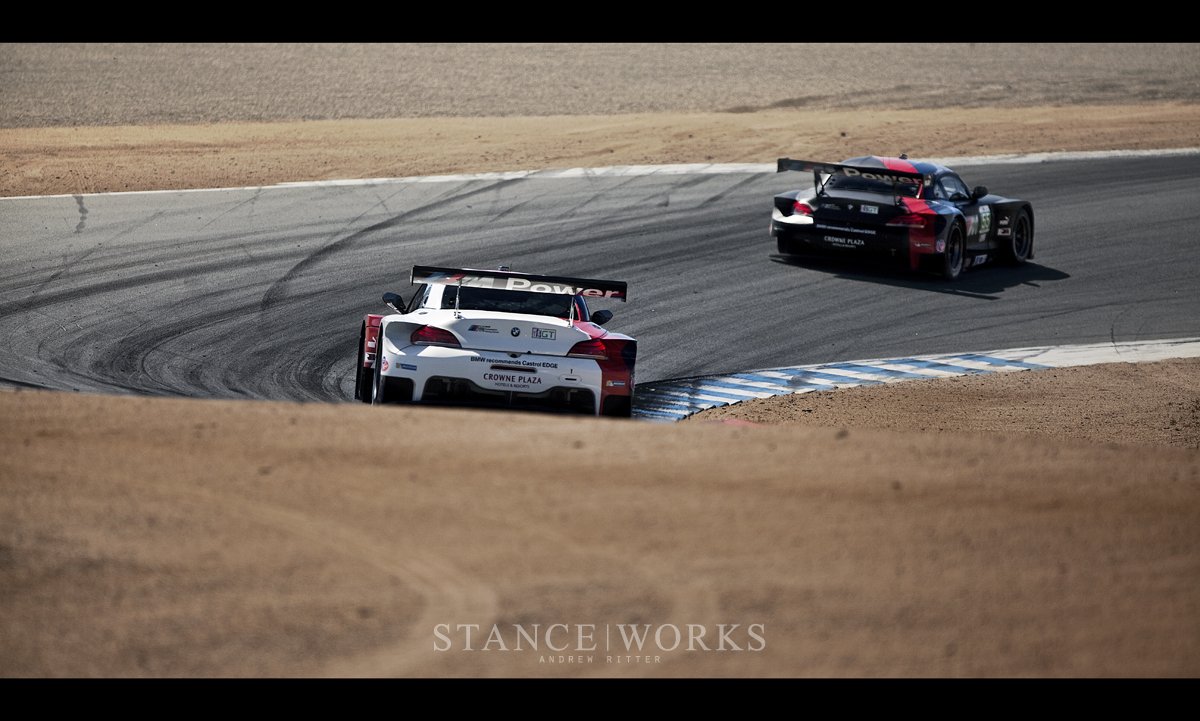 It was only 27 laps before Müller managed to climb the GT class from his 8th place starting position up to 4th.  One hour into the race he was able to snag 3rd place and held his position until he handed the car off to his partner, John Edwards. Edwards was determined to find himself on the podium once again and he had his sights on the Falken Porsche that sat ahead of him. Approaching slower traffic, Edwards skillfully maneuvered around Brian Sellers’s Falken 911 and secured 2nd place. Unfortunately, following a mistake on a restart, Sellers regained 2nd place, leaving Edwards to secure a 3rd place podium finish in the No. 56 Z4 GTE. The No. 3 Corvette fought hard and walked away with a well deserved first place finish. 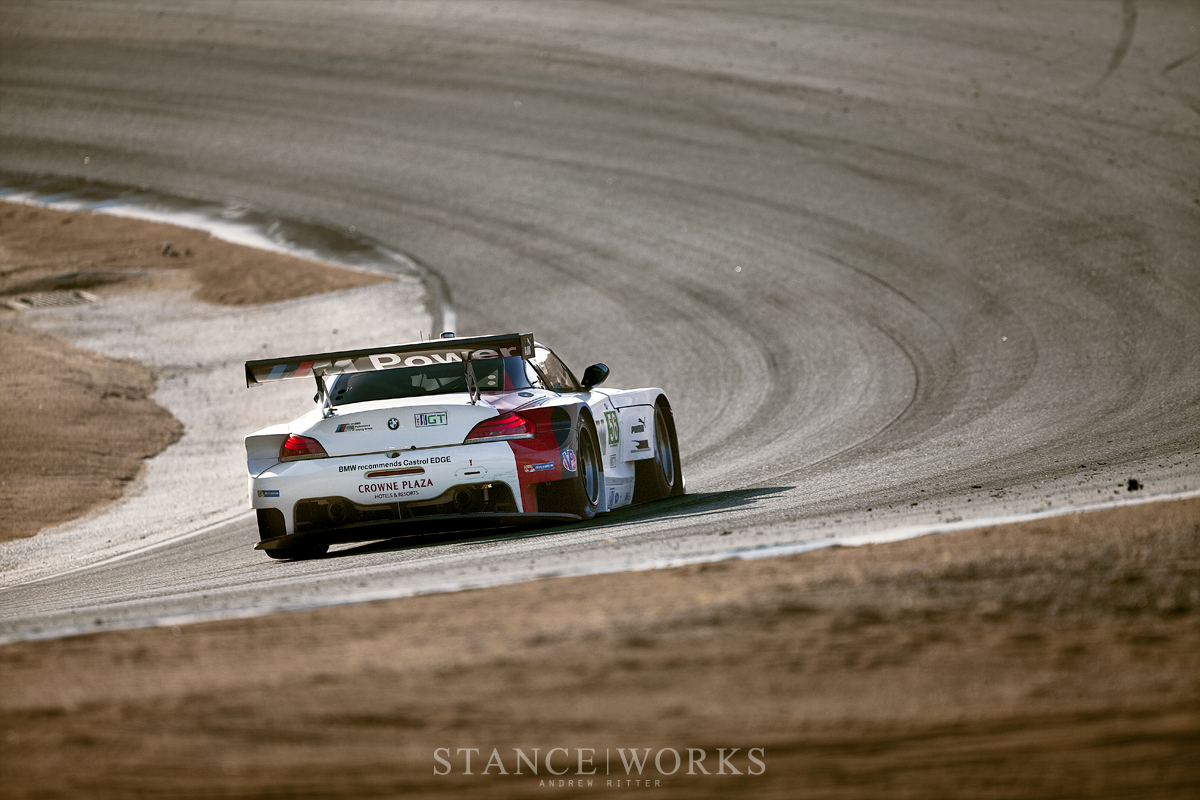 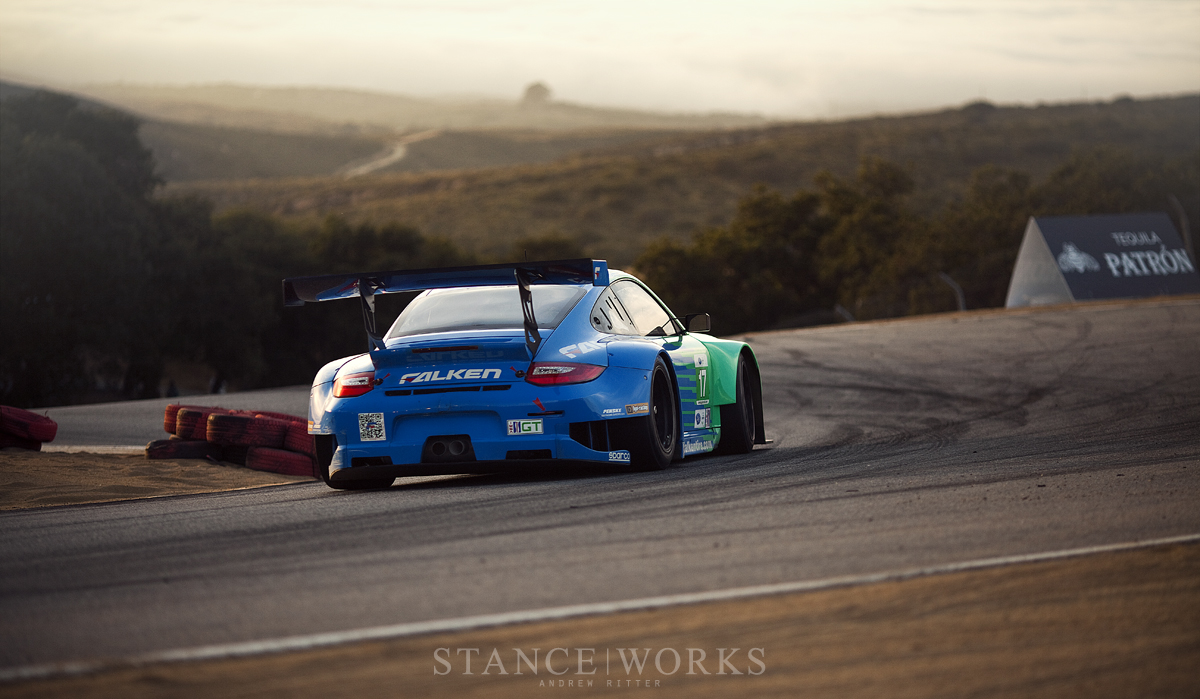 This weekend’s podium finish pushed Dirk Müller into the lead for GT driver point standings and allowed BMW to retain the 2nd place in the GT class manufacturer point standings. Despite still lacking the speed that the other GT class cars have in the straights, it’s clear that the BMW Z4 GTE is already a competitor after only its 3rd race. Team RLL will continue to learn their new chassis and familiarize themselves with the new dynamics of the Z4. We are eager to watch as the exciting GT class continues in July at Lime Rock Park. 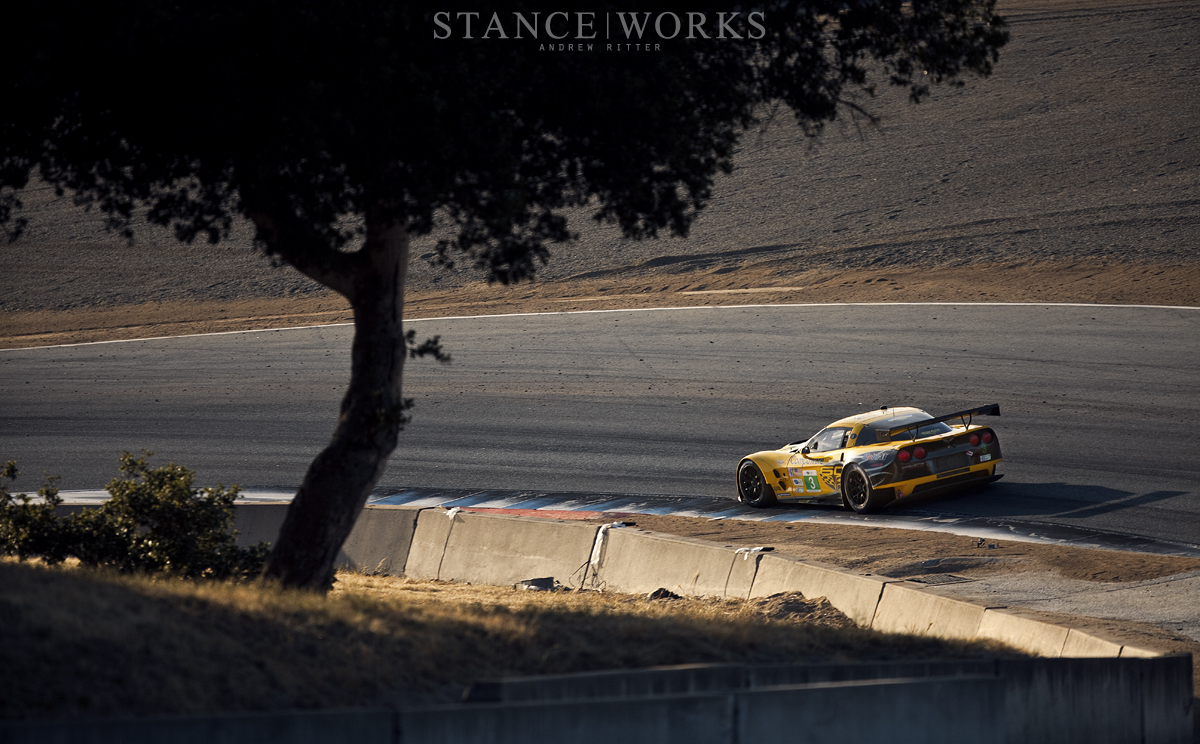