An Open Discussion – Static Versus Bagged : Where’s Your Allegiance?

An Open Discussion – Static Versus Bagged : Where’s Your Allegiance?

It's an argument that finds its way into discussions in every car show parking lot and enthusiast garage. Spanner wrenches and elbow grease are pitted against control switches and compressors. The debate gets heated as claims that your car isn't low enough until your subframe hits asphalt are met with remarks that "airride is cheating". Some guys will never give up the springs that rest on the perches of their coilovers, while others have swapped them out with their rubber counterparts to abolish that last quarter inch of gap in their wheel well. In this low lifestyle, enthusiasts often pledge their allegiance to a side. Which side are you on and what you draws you there?  We sit here in the StanceWorks office and we've decided to kick off the discussion ourselves...

Mike Burroughs: I've built cars with air suspension and I've built cars with "static" suspension, and I think they've both got their place - points like cost, style, capability, performance, and practicality are all valid. However, I think one stands above the rest: ask any hardcore static guy and he's going to tell you one thing - bags are the easy way out, and I think it's a hard one to argue. There's something inherently more impressive when two cars sit side-by-side, both with mind-blowing wheel and tire fitment, and you discover that one is on air and the other is static. Simply put, when it comes to a static car, what you see is what you get.  While both cars may look phenomenal, the air-ride owner simply pressed a button to achieve his look while the coilover owner is committed to his look. There's no "drive height" and "show height," they are one in the same.

Andrew Ritter: While both are impressive, airride allows you to squeeze out that last bit of height that would otherwise leave your car un-drivable. It allows fenders to be tucked in between lip and stretched tire. Bumpers can come in contact with the ground. With the press of a switch owners can tuck those large wheels up against the wells while laying their subframe on the ground. The "drive height" and "show height" you mention allow the car to have an insane fitment and then be driven rather than simply parked at a show. With static cars you wear away subframe bolts on a daily basis and that tight fitment leads to burnt fenders.  Every speedbump and steep parking lot entrance slows static cars to a crawl as they scrape their way over, leaving bits and pieces of their undercarriage behind. 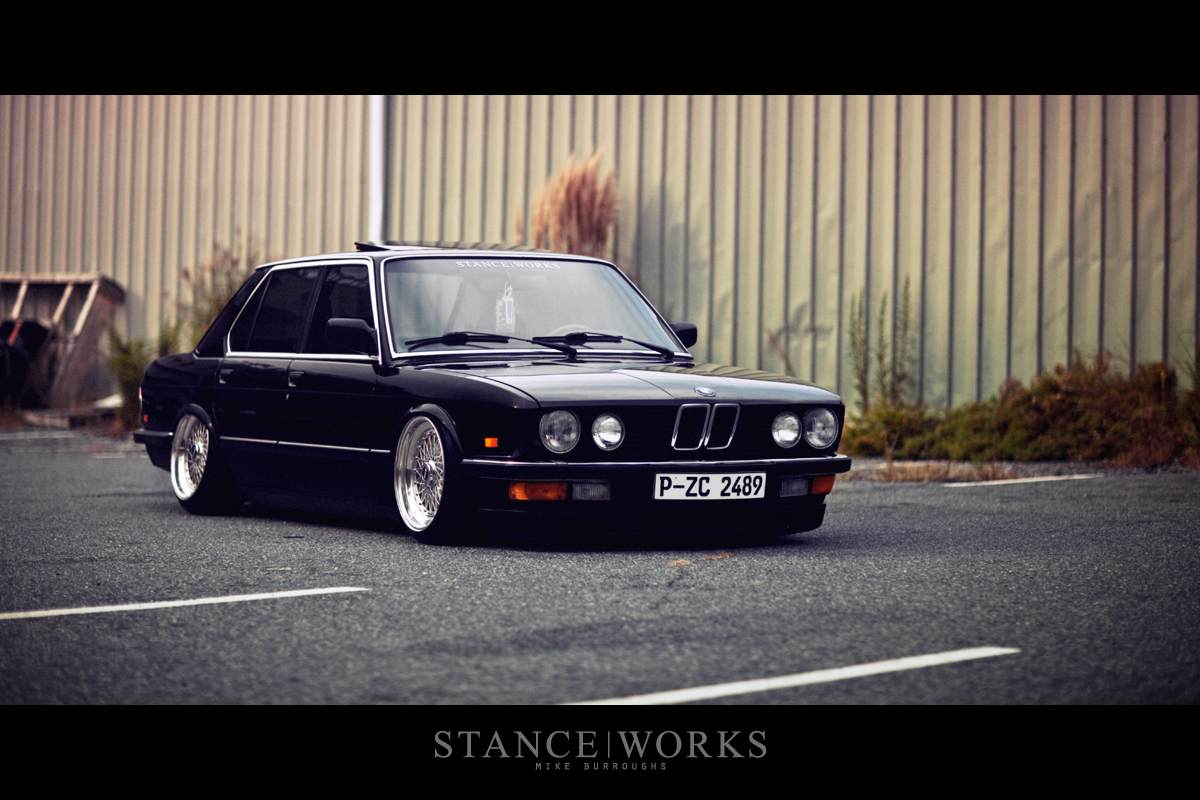 MB: While some guys take pride in the damage their cars receive, I think most people can respect a smashed oil pan as a certain "badge of honor," whether its in jest or seriousness. While it's silly, there's an obvious level of commitment that comes with "living the low life." Smashed oil pans, worn frame rails, burnt paint, et cetera. To some, they're earned. Not to mention that if needed, coilovers can, with relative ease, be cranked up to realistic heights suited for harsh roads. Or better yet, the track. In many ways, it's the best of both worlds. A large portion of the car scene prefers a balance between aesthetics and performance, and I think most would agree that coilovers offer the better balance. Dedicated track cars use coilovers for a reason, and you have that capability with the turn of a spanner wrench. Sounds like the better end of the deal, no?

AR: While nearly all track cars enlist coilovers for their competition needs, airride has improved a great deal over the years and it offers the performance that most enthusiasts need. Competition race cars need the finite adjustments of a coilover to dial in turn-in, corner balance the car, and address and handling needs. For 99% of car enthusiasts who are simply looking to enjoy their car on twisty roads and back mountain streets, this is overkill. With a quality airride setup, you can still have a car with fun sporty handling.

MB:  To be fair, even if airride offers good enough handling, it sure seems like an expensive way to more or less "compromise." Air ride systems can get into the thousands of dollars when it comes to struts, lines, management, and the like. While coilovers can exceed $10,000 for a set, it's not hard to find a solution for less than a tenth of that, which in turn will get you down the road, having fun, and looking good.

AR: Airride can be expensive, but it's a modification that will let you truly enjoy your car. We all know someone who is unable carry multiple people in their car without rubbing, or have seen someone who rubs down their tire sidewalls with every turn taken at speed. Those are true sacrifices, as you trade off many of your car's functions for a low static height. Soon you are left with a car that can only be used with gentle care. The comfort, adjustability, and the care-free nature that an air suspension allows you to have that insanely low car while still having a car that you can use day to day without any stress.

The arguments for each side are endless, and we're sure there's much more to be said. From performance to practicality, each point is valid. With the introduction of threaded air struts for newfound adjustability, will air continue to grow in popularity with the previously "static only" crowd? Or will the proven method of coilovers make a comeback? We're eager to hear your opinions - which side are you on? What suspension is under your car, and what's your reasoning?