“A picture is worth a thousand words.” This quote has probably been heard by every breathing person at one time or another. Sure, a picture might give us a thousand words, but are they telling us the most important things about its subject? When it comes to a feature, I’d argue no. Sure, photography is necessary, as it shows off the blood and sweat that has been put into someone's pride and joy, but a picture can’t always tell you the story behind each build. Scattered across the web are pictures of cars, missing their respective stories, modlists, or even an owner’s name, whether you are on Facebook, Twitter or Instagram. Since everyone is hung up on this idea of how a car looks through a camera lens, it has left some cars being overlooked, lurking in the shadows. But it turns out that some of the best gems you find are the ones you have to hunt for. 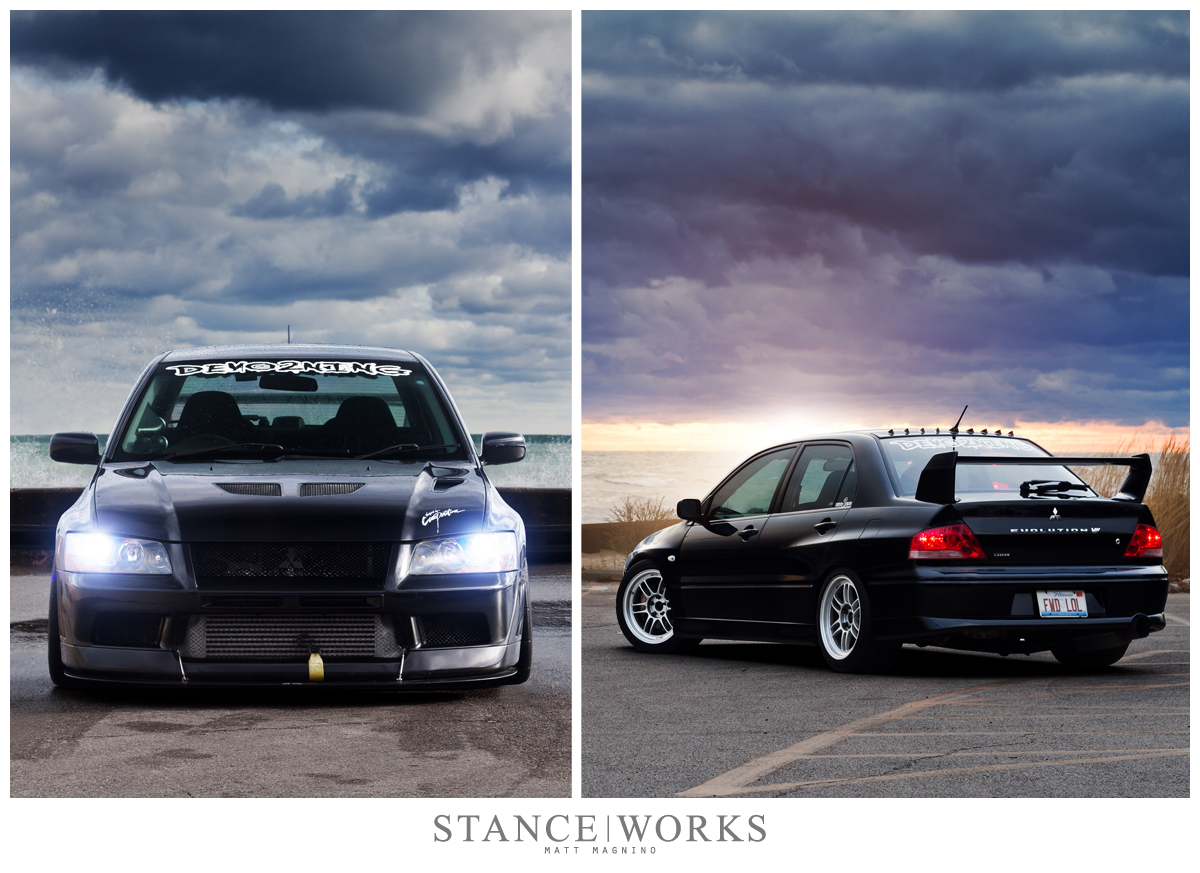 About a month ago, photographer Matt Magnino came to me with a car that looked simple but clean. No crazy stance or wheel setup; it wasn’t painted up like a drag queen looking for attention. He then said something which I found myself saying shortly there-after to Mike: “before you judge it, hear the story behind it”. I would then hear the story behind this Evo VII owned by Zach Strauss, and it is a blinding reminder of why there is so much more behind a build than what meets the eye. 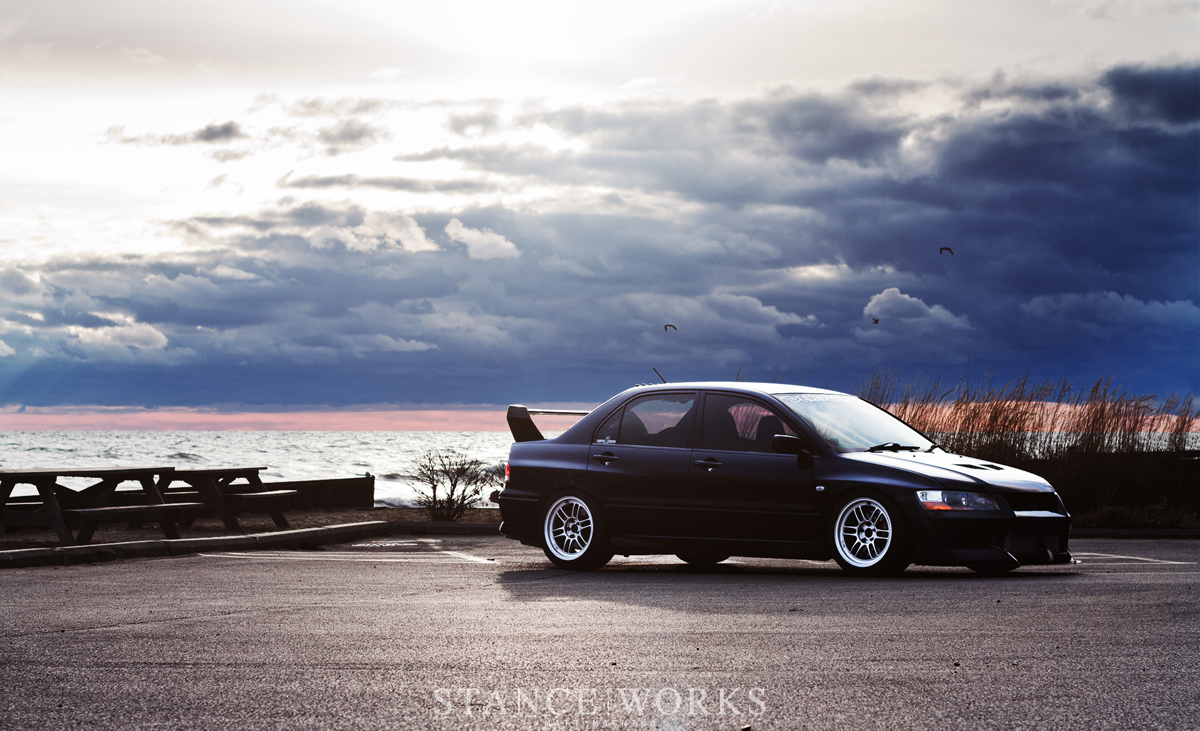 Before this Evo VII, Zack had owned a Volkswagen R32 and an Evo X, both of which were mildly modified. Due to his commute, he decided to pick up a Triumph Daytona 675 to save on gas and to keep the miles off of his Evo X. However, two months after picking up his Triumph, Zack’s life would change forever.

One night while out for a ride, traffic suddenly came to a stop in front of Zach, and in the moment, Zach headed towards the shoulder, as most of us would, to dodge the car in front of him. Unfortunately, on this night, an SUV had stopped on the shoulder to change a flat. Since there was not enough time to come to a stop, he hit the back of the SUV at about 35 MPH. Zach is the first to admit that he’s done some dumb things before, but he was very serious about not doing them when others were around. Since the accident was a blur for Zach, he thinks that he was forced off of the road by someone who wasn’t paying attention. 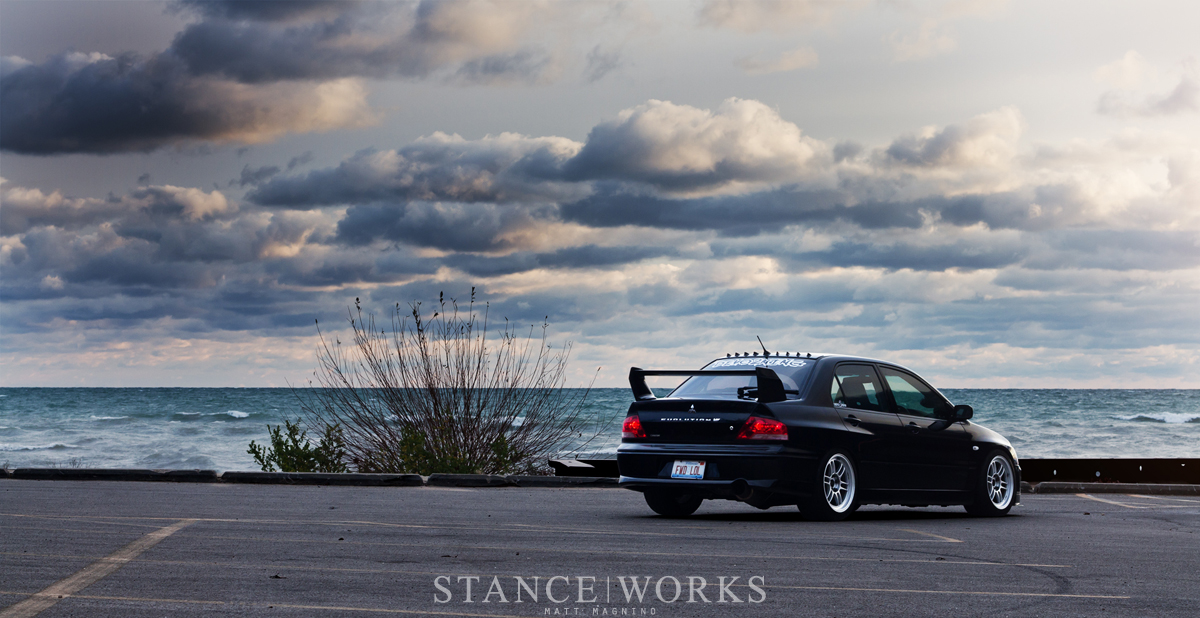 The end result was Zach breaking his femur in half, cracking a vertebra in his back into 3 pieces, cracking all 7 vertebrae in his neck and shattering his right shoulder. The accident would leave him in the hospital for 4 weeks, followed by 5 long months of rehab. Due to the accident, Zach had lost use of his right arm, as the nerves that went from his right arm to his spinal cord had been pulled out which can’t be reversed. 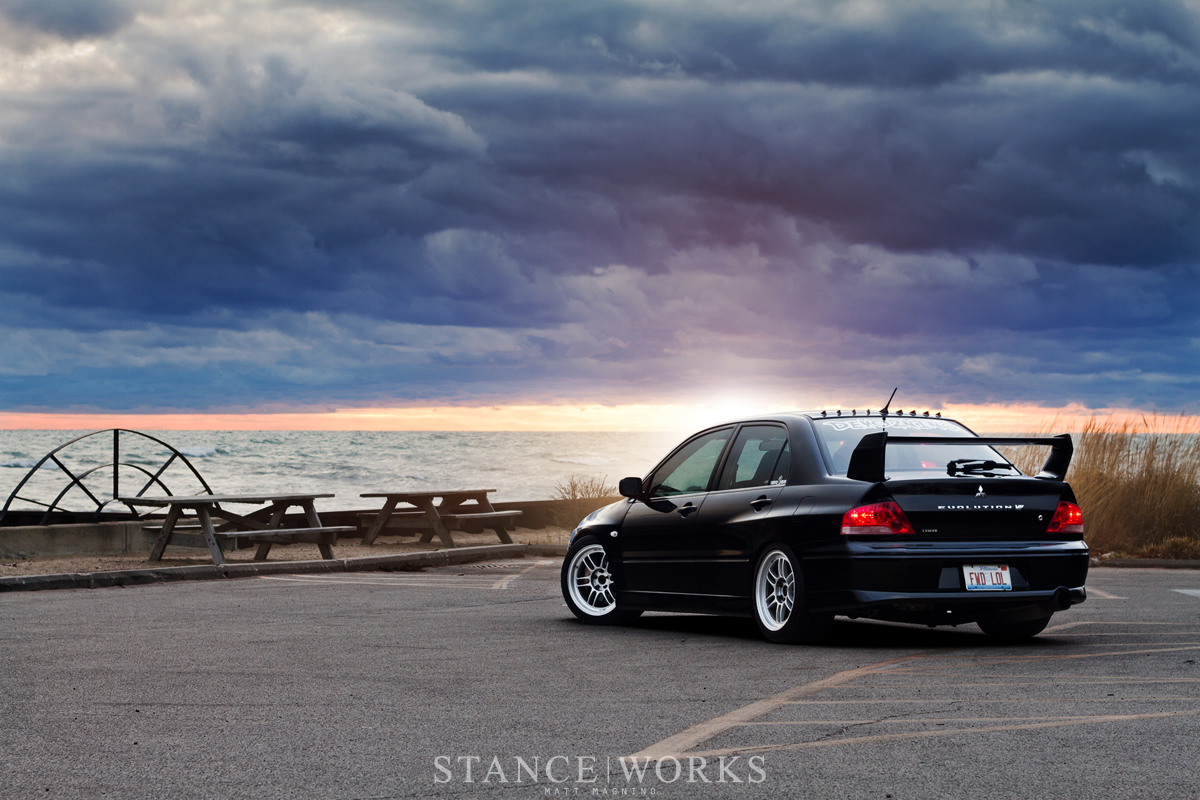 After rehab and getting back to school and work, Zach decided it was time for a new car. He still owned his Evo X, but he couldn’t drive it since he was unable to use his right arm to shift the manual transmission. So the car hunt began, which the leading contender was the new Cadillac CTS-V, but he couldn’t get over the horrible fuel consumption. After seeing a friend post a picture of an Evo 7 on Facebook, Zach instantly got the idea to import a car. For Zach, it was perfect, as it would mean a car that was unique and rare, plus he would be able to drive a manual if he chose something right-hand drive. Zach got in contact with the owner of the Evo 7 to see about importing, and it just so happened that the owner was looking to sell it. After a test drive, Zach was in love and picked up the Evo 7 for his new daily driver.

But, despite his mishaps, Zach's desire for power hadn't wained. Most of the time and money on the Evo has been spent under the hood. The bay is home to a stroked 2.3L with Wiseco pistons, Eagle rods, and a 4G64 crank. Opposite the block is a fully built head with Kelford cams, 1150CC injectors, and a slew of other upgrades too long to list. The end result of all this work is a daily-driver, tuned by FlyinEvo2ning, sporting 425whp. 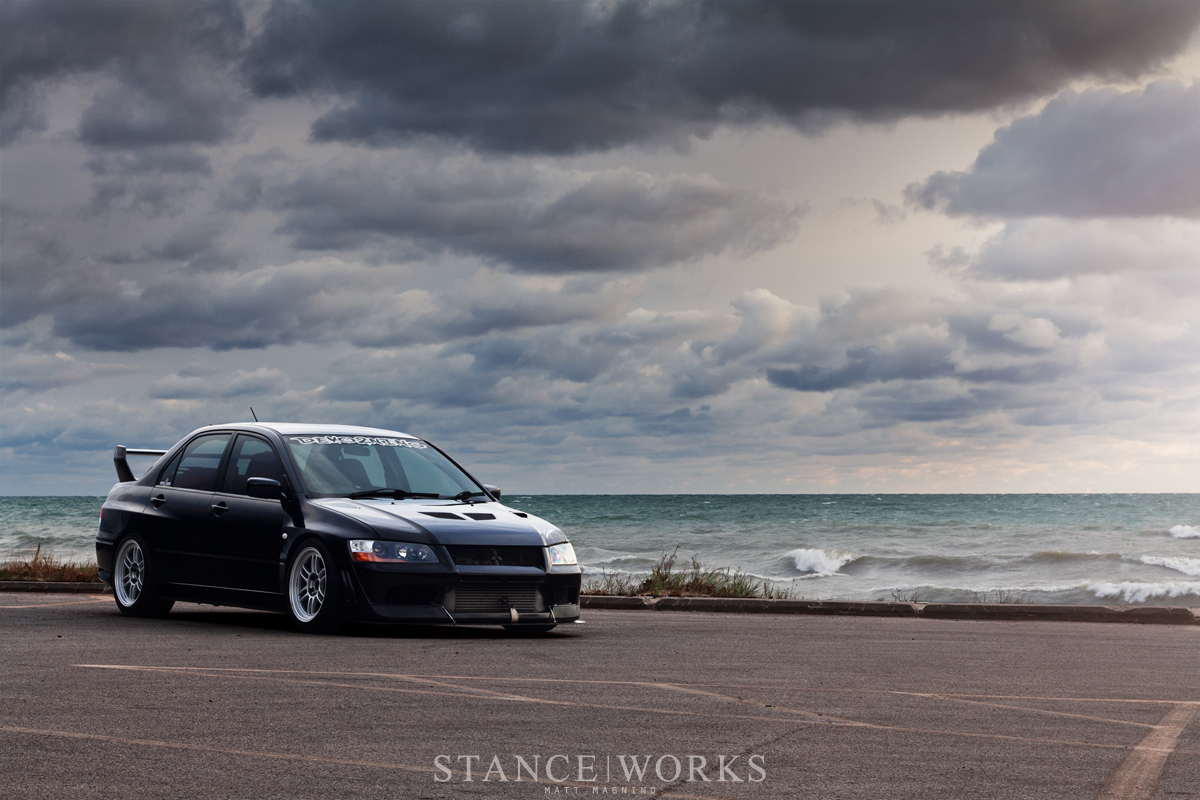 With the looks, Zach kept it simple and sleek by adding a couple carbon fiber pieces along with a set of custom JDM Evo 7 headlights with blacked out housings. It’s a look that doesn’t catch too much attention while it’s out stalking its prey. The suspension also followed the function over form route by way of Stance GR+ Pro Coilovers with SSD ("special setting dampers") coupled with a few other upgrades to enhance the overall handling. All of this work was made possible with the help of the guys at Devo2ning, whom Zach enlisted to tackle the projects he wasn't physically able to take on.

Since Zach went for performance over cosmetics, the internet world will heckle his build for not being appealing enough, low enough or not crazy enough for a feature, but Zach has built his Evo 7 to enjoy and has overcome great odds to build a car this impressive, and it wasn’t for internet fame, but instead his love for cars and hitting the open road. Builds like this are why we need to be reminded that the automotive scene is so much more than what meets the eye; it is the people that make up this scene that make it so great. 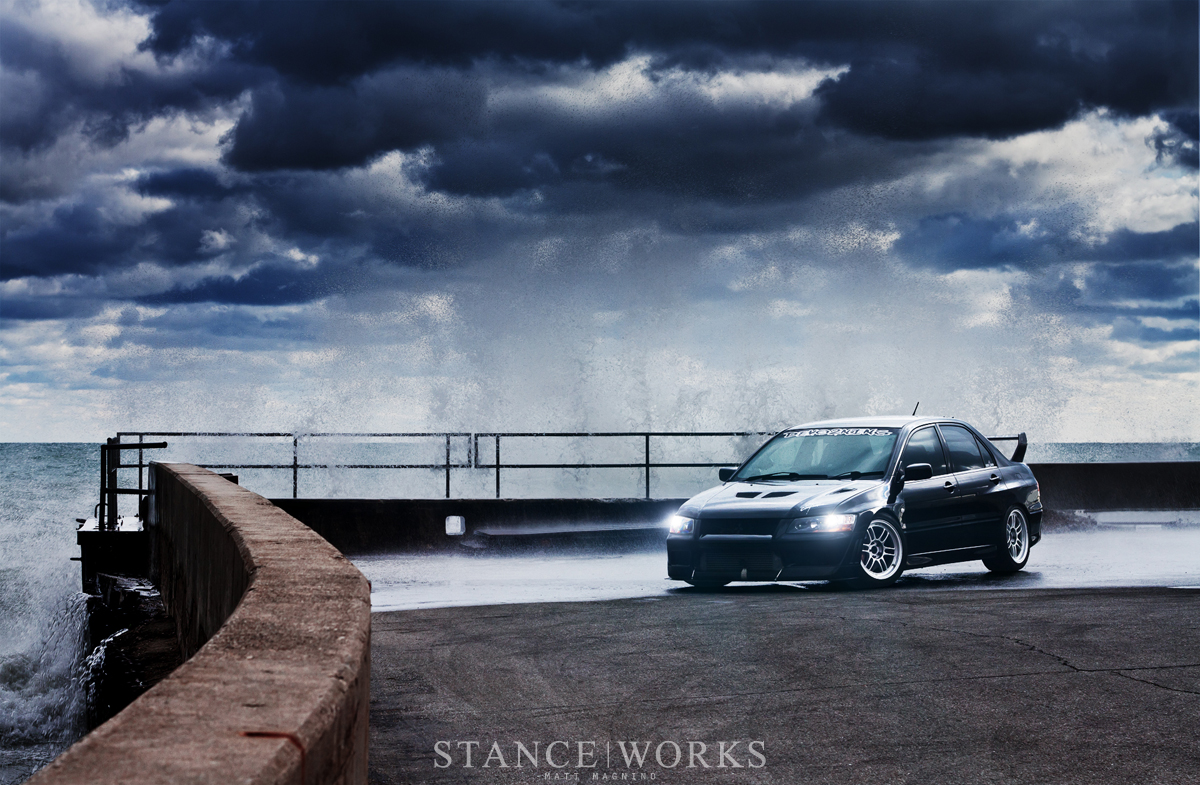