Formula Drift is Back

Formula Drift is Back

Formula Drift is back.

It's been an almost unbearable wait since the 2011 season came to an end with Daijiro Yoshihara as the reigning champion. As expected, he made a return to defend his title; however, the streets of long beach will certainly not be a mere repeat of years past. The 2012 Formula Drift season is only a few hours underway, yet makes huge promises of excitement and surprises. The big dogs such as the notorious Falken cars are back, however, it's the "little guys" that show promise this year, with the number of rookies coming in at it's highest ever in Formula D competition. 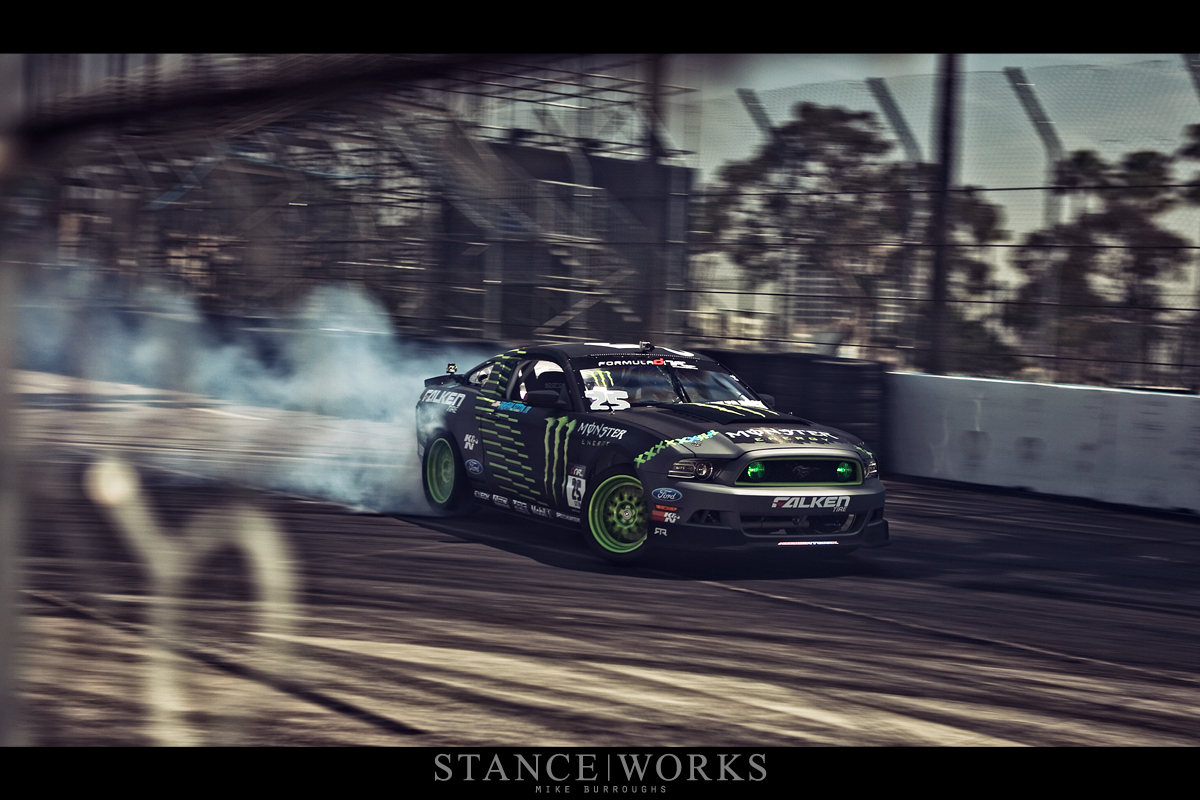 Day One of Round One: The Streets of Long Beach is, as always, the day of qualifications. Each of the drivers compete for a top score to establish the top 32 drivers which will compete head to head at the main event on Saturday. As the first event of the series this year, there was an immense amount of anticipation for the new driver appearances, the new liveries, and most importantly, the new cars. 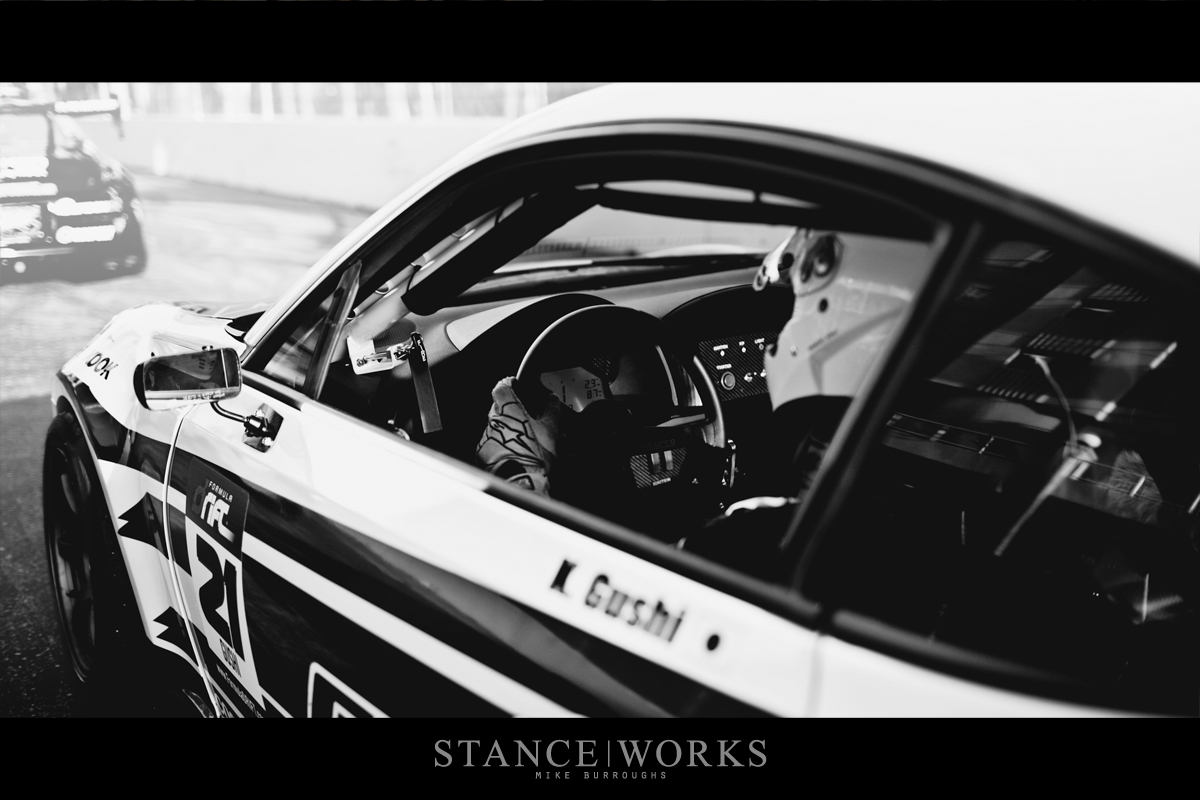 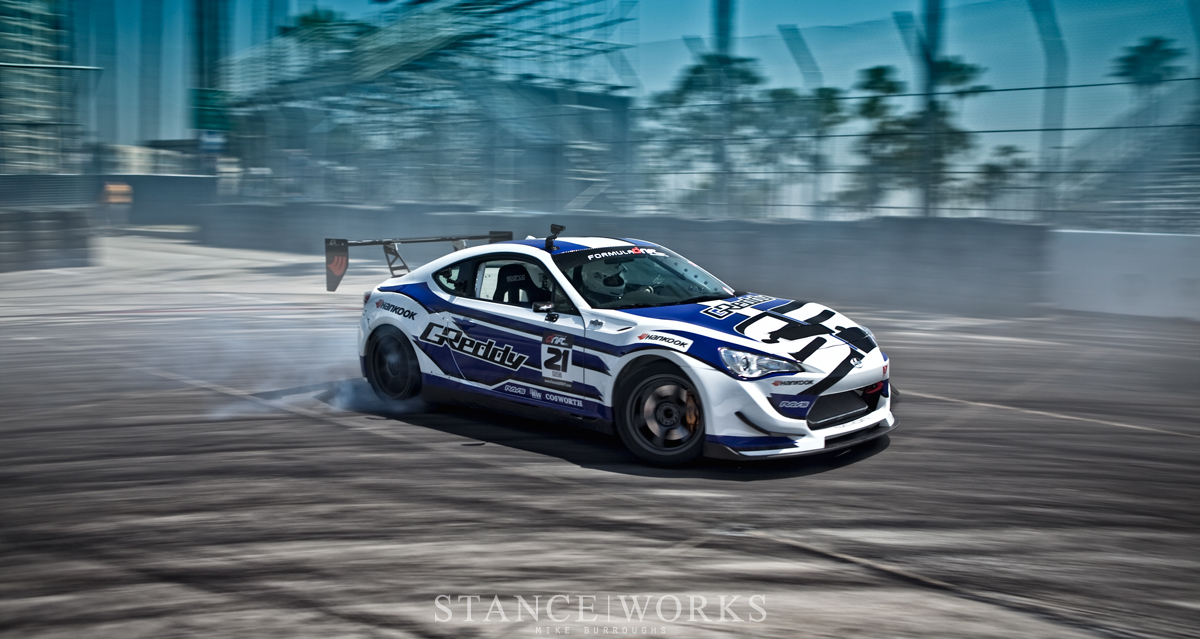 Today marked the debut of Ken Gushi's Formula Drift Scion FR-S, built to the 9s and ready to shred asphalt and tires into inhalants. The new monster set the stage for what is to come from "The Gush" this season, and there's no denying that the FR-S itself stood out in the pack. As the only one in the series this year, it's sure to garner a lot of attention and potentially grow as a crowd favorite. After all, it's out there being abused just as the designers had hoped. 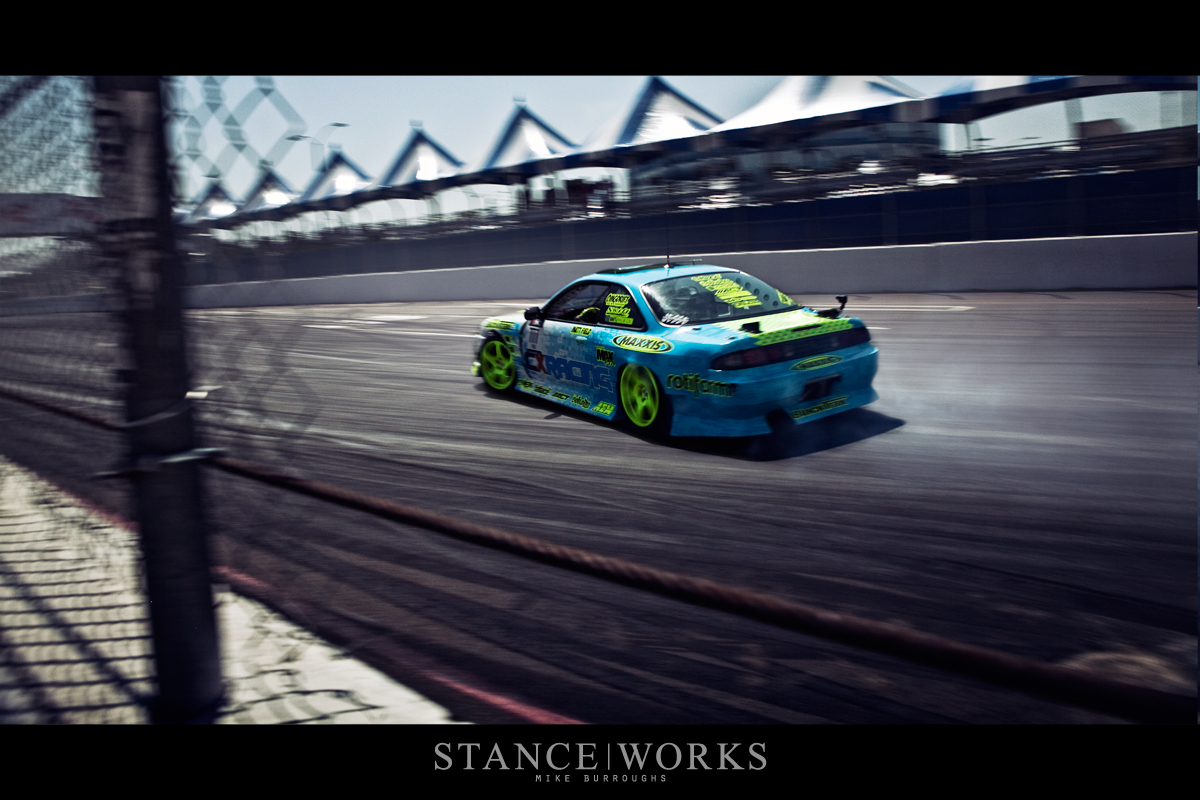 Several cars returned this year with all-new liveries, including Matt Field's Kouki S14. This time, the car's cornea-piercing yellow has been adopted by the wheels, and the body's metallic and flake have been replaced by the blue you see before you. And Rotiform has hopped in to the mix as well, with Field's NUEs proving that Rotiform wheels can be put through some abuse after all. 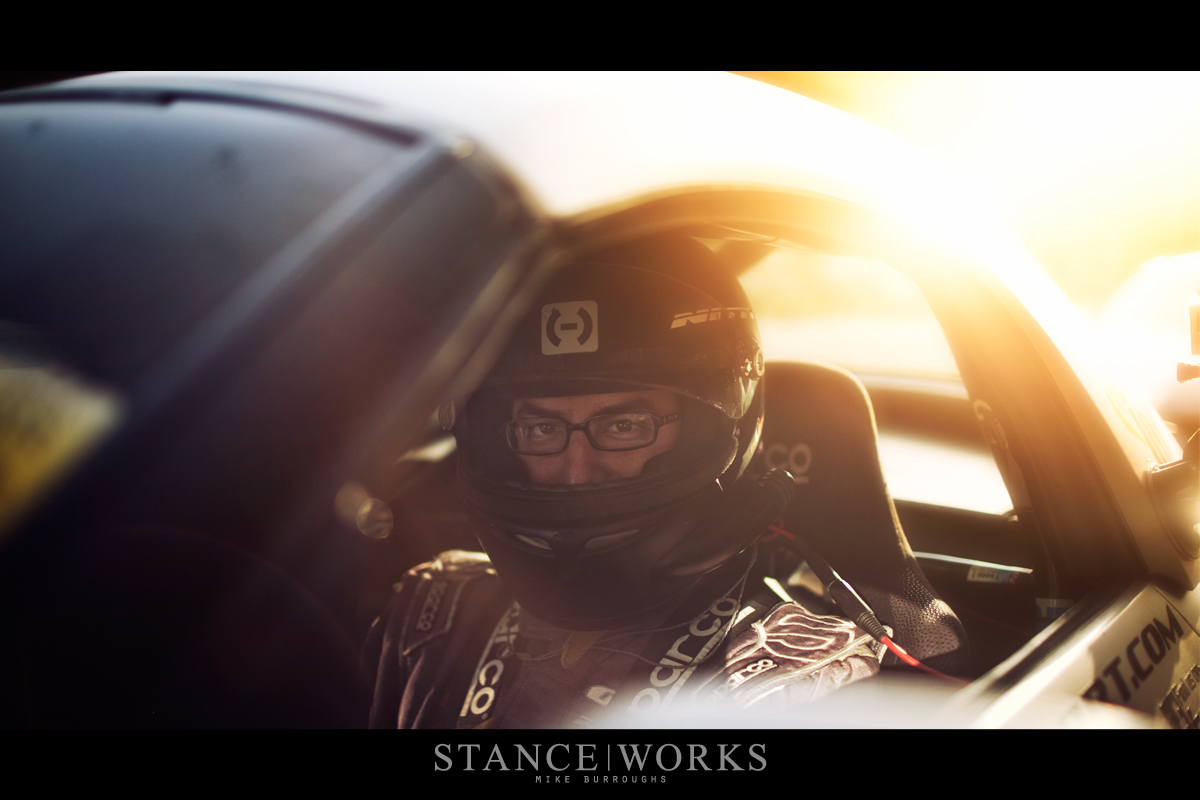 Some of the crowd-favorite drivers are back and burning rubber. Mike Essa's Turbocharged S54 M-Roadster is sure to please the European and BMW fans (hey, that's me!), and as hoped, he's laying down the smoke he's known for. As said, there are plenty of new drivers as well. One of the new faces of Formula Drift, Kenny Moen, has brought another 350Z into the mix, and he's not holding back either. He was one of the few today to execute a wall-tap with true elegance and grace. 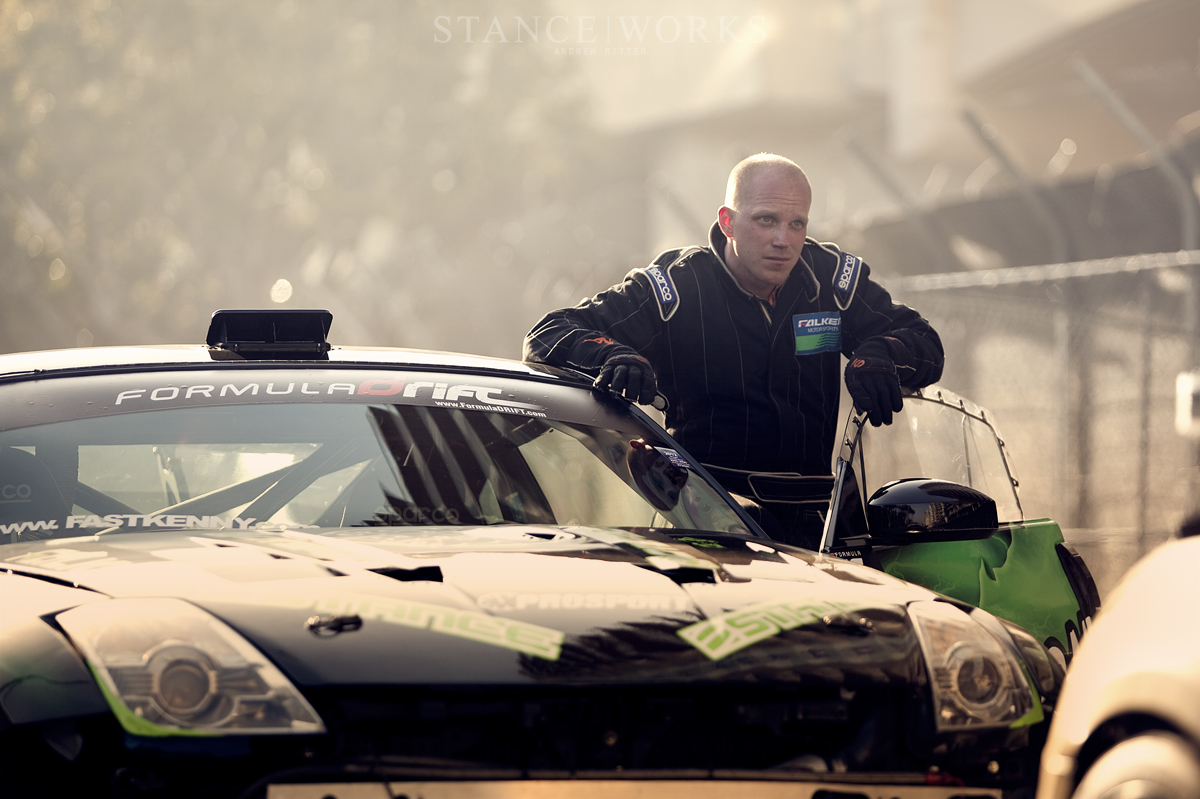 As always, the paddock is open for anyone to wander about, with the ability to get up close to the teams as they work on the cars and keep them ready for the next set of runs. Tires, tires, and more tires are stacked in every spare corner and on every ledge, ranging from wide to wider. Yokohama, Falken, and the rest of the big names are all present. 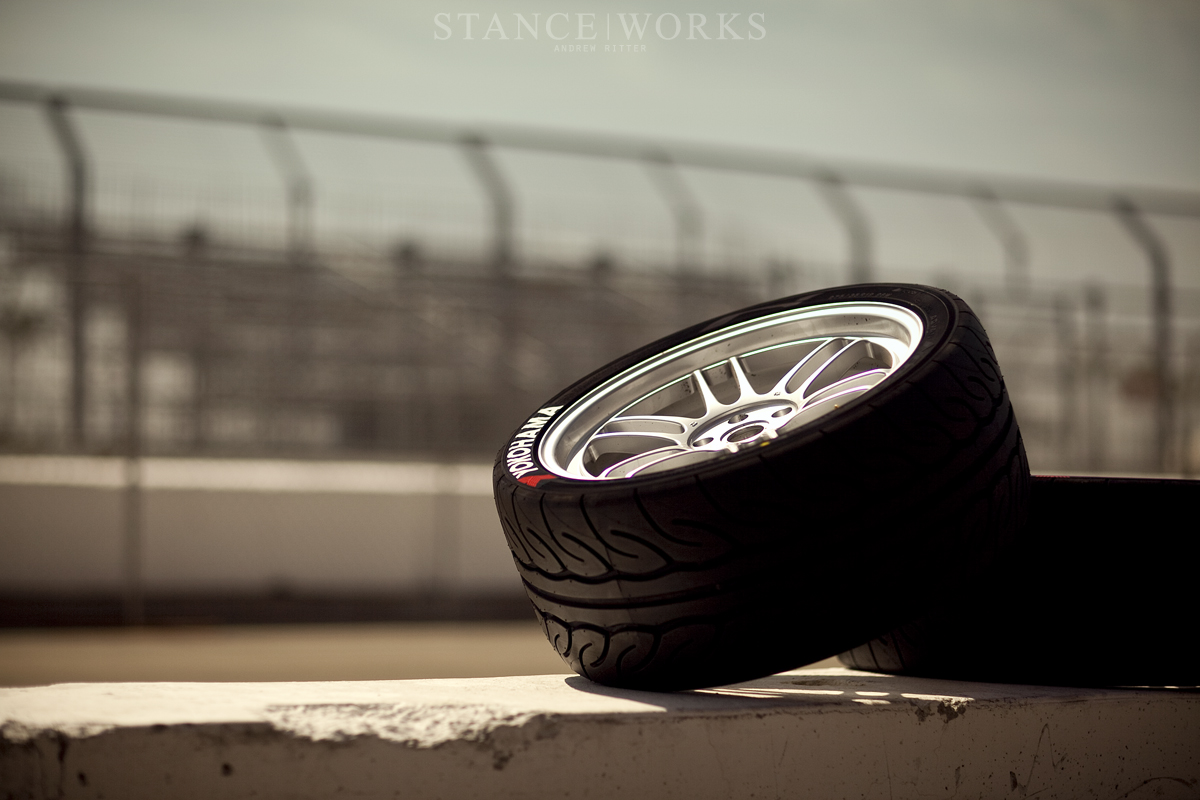 There's certainly no shortage of media this year either. Each car has what seems like a GoPro camera dangling from every panel, including the GoPro Camaro itself. Each and every media point on course was packed to the gills, and the main event on Saturday will only prove to be more crowded. But with the growth of the event, it's expected and encouraged. 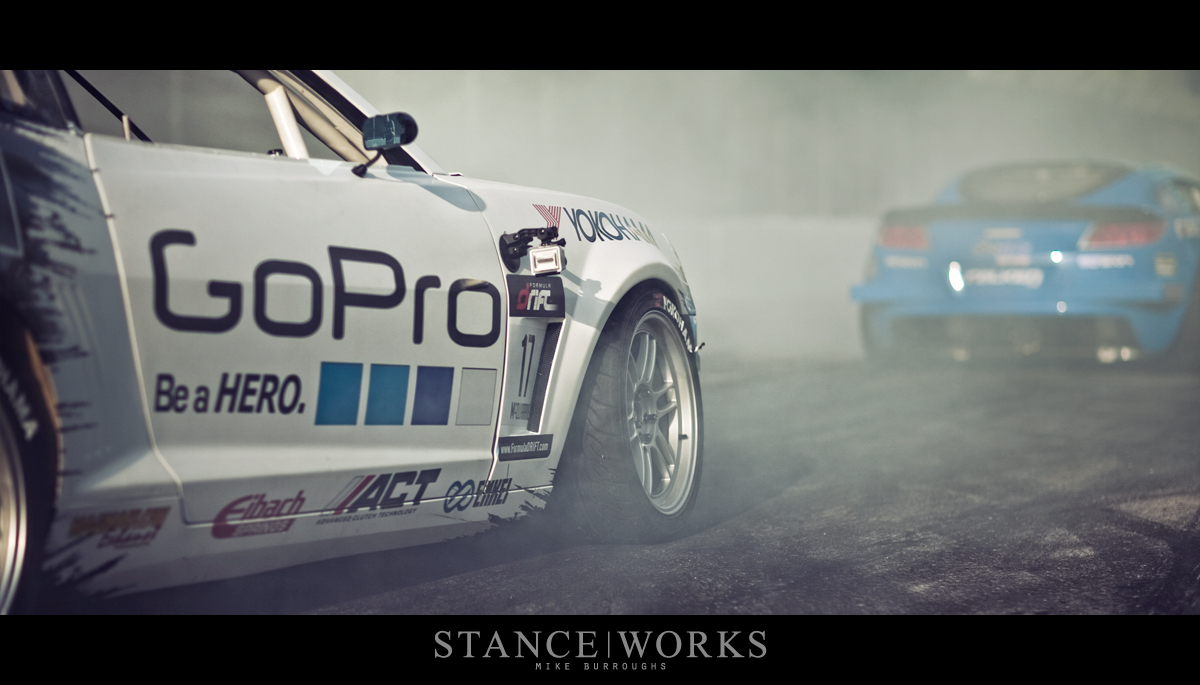 My personal favorite, Team Need for Speed is back with the same cars and same drivers as last season, with updated liveries but a familiar show. Fredric Aasbo is piloting the TC once again, one of the few remaining cars without an 8-cylinder engine. A minor update from flat red to flat orange livens up the car a bit while also ensuring we don't fail to recognize it. 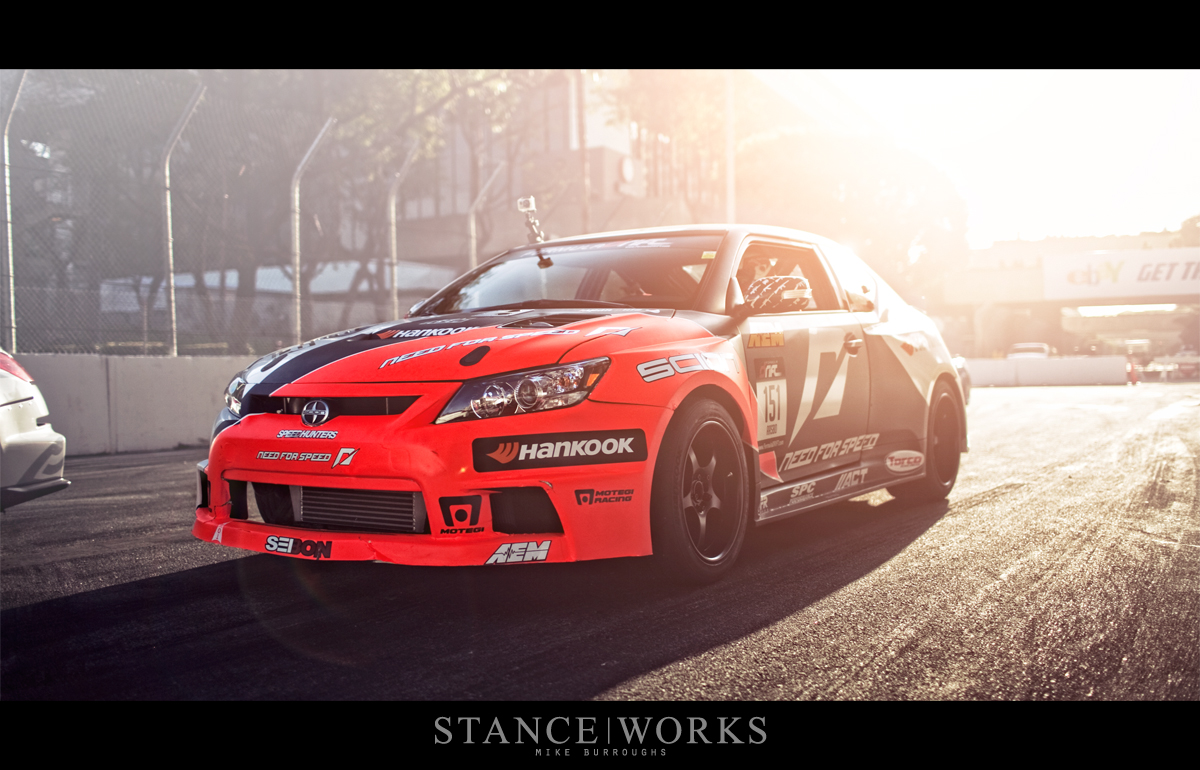 But Aasbo isn't afraid to put some beauty marks on the "fresh paint". Battle wounds were abundant as always, and are arguably part of what makes the series what it is. When car meets wall, something special happens. Sometimes, "special" results in an uproar of the crowd as a car narrowly escapes death-by-k-rail. Othertimes, "special" means "oops". 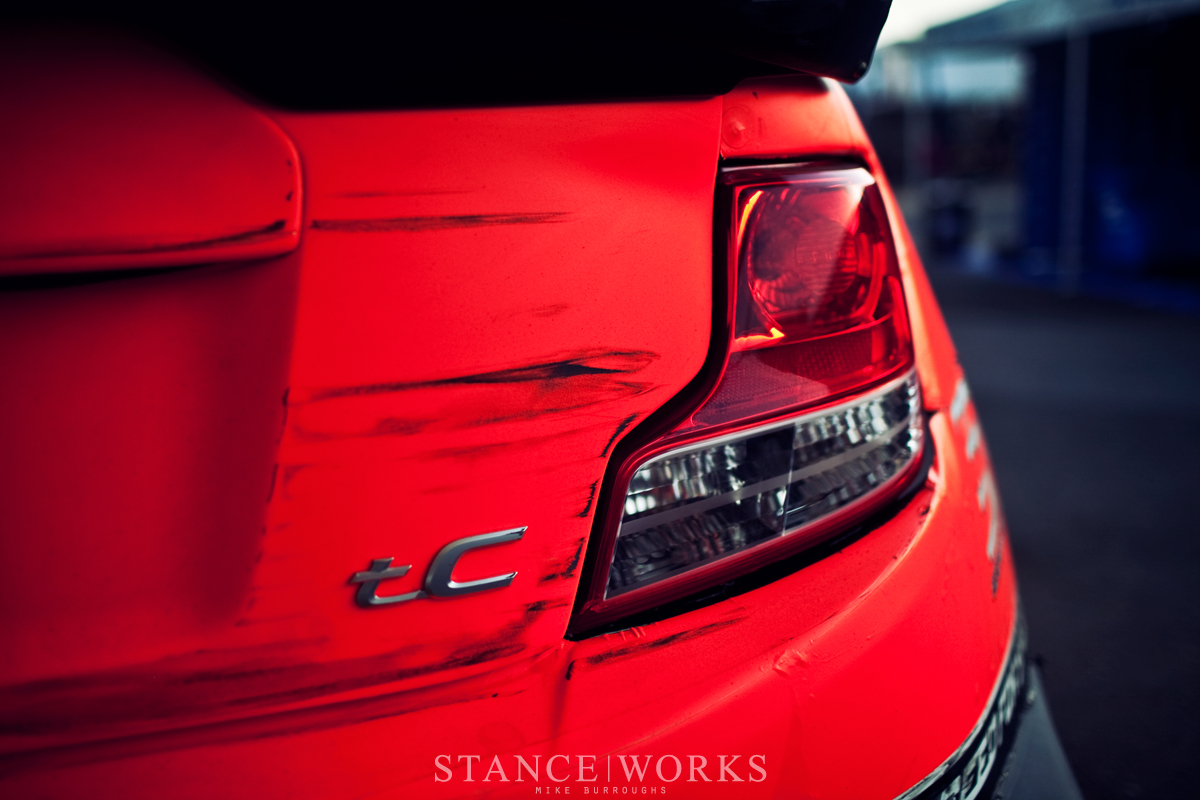 The other Need for Speed driver, Matt Powers, returns in his V8-powered S14. If you're unfamiliar, Powers is known for being a crowd over-all favorite, rising to the top of the game while keeping the grassroots feel of his spirit alive. And he's not afraid to push the limits.  Even on day one, Powers's S14 almost met an end after a spinout on the second turn. But he's got a motto. 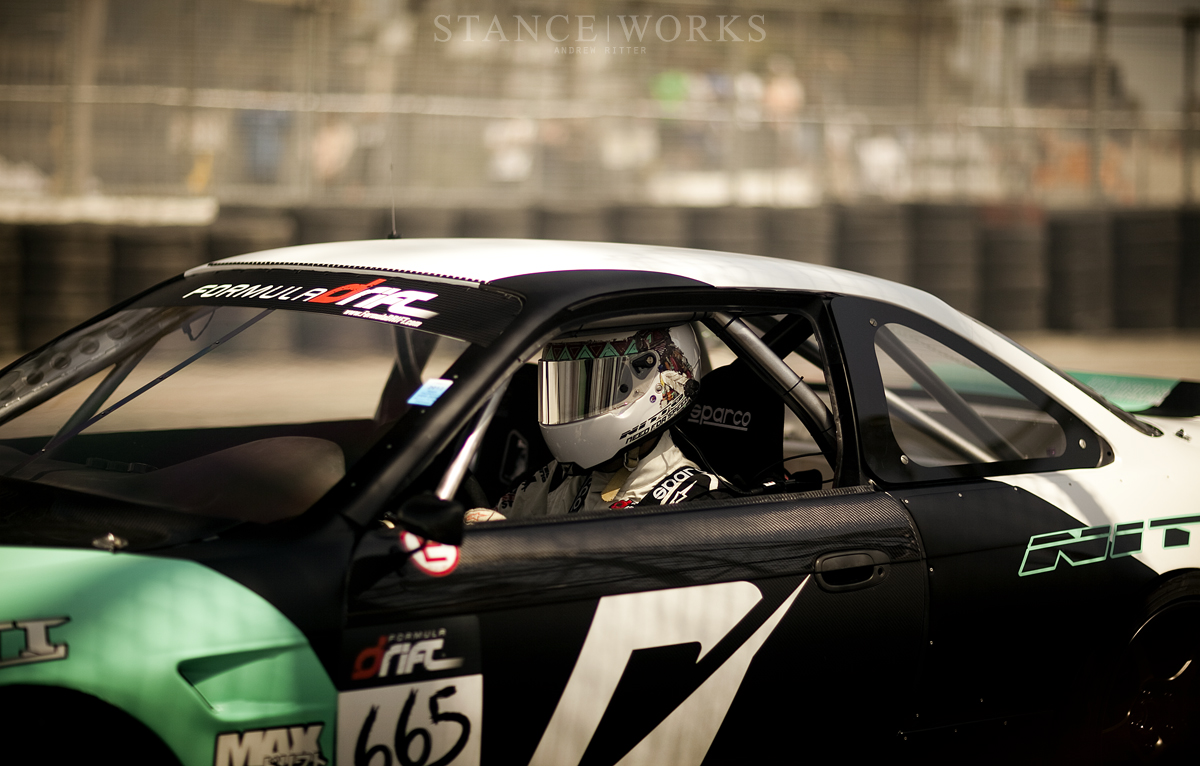 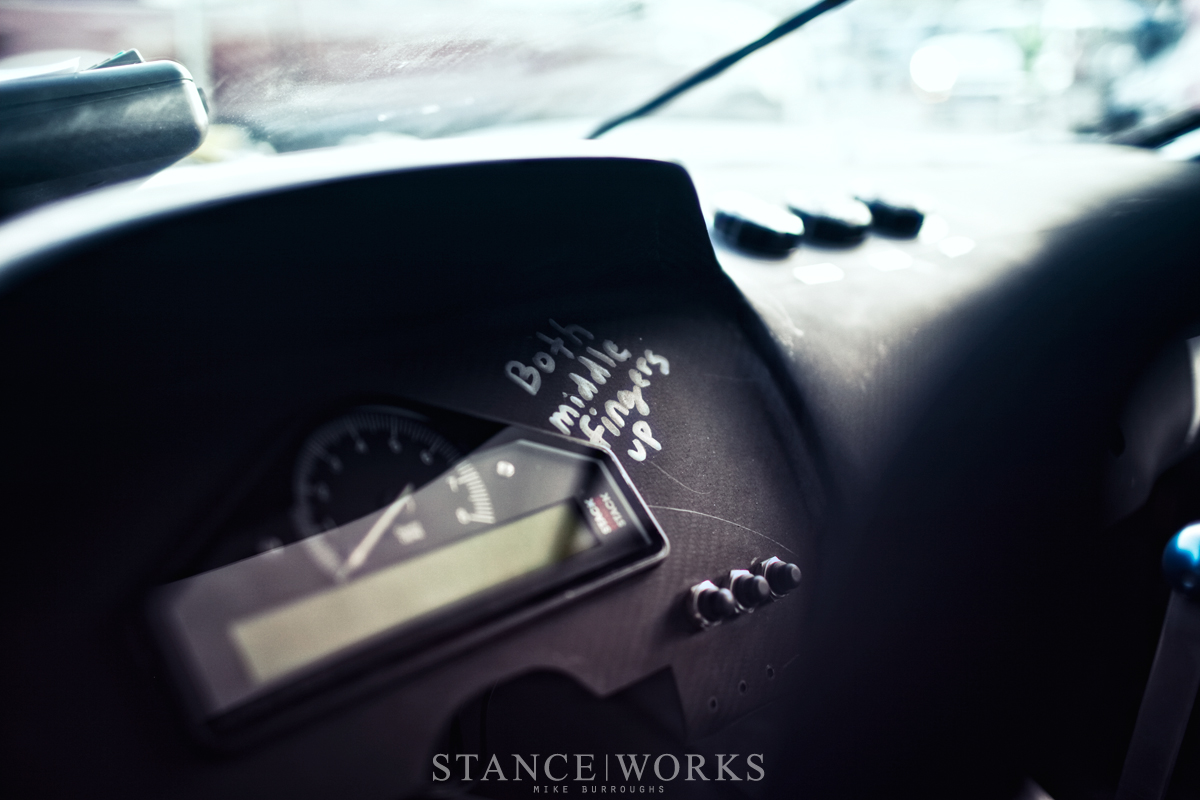 It summed up in 4 words everything about his style and attitude towards winning and losing.

Team Blu808 brought out both a C6 Z06 and an E36 M3 to play, both sporting 8 cylinders and matching paint schemes. Unfortunately, the Pro/Rookie pair didn't quite have it in 'em today. 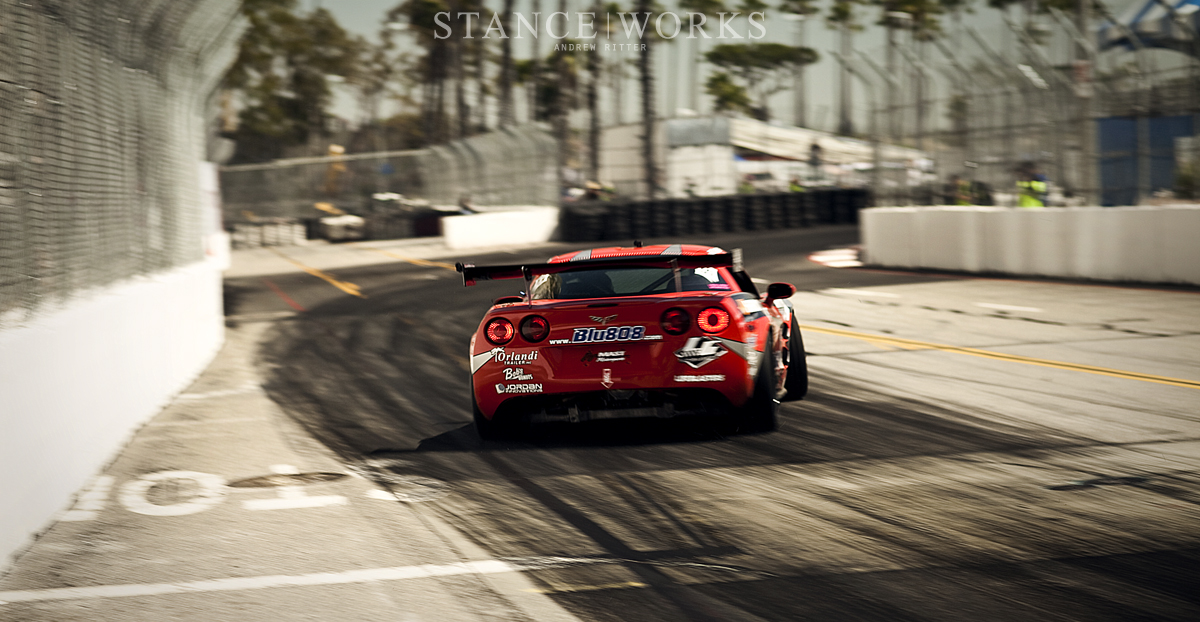 The top spot of qualifying went to Ryan Tuerck, big-dog-gone-underdog, piloting an S13 after resigning from the pilot's seat of the Mobil One Camaro last season. Ryan and Team found themselves still tidying up bits on the recently finished car after qualifying as the rest of the teams loaded up their cars for the evening. 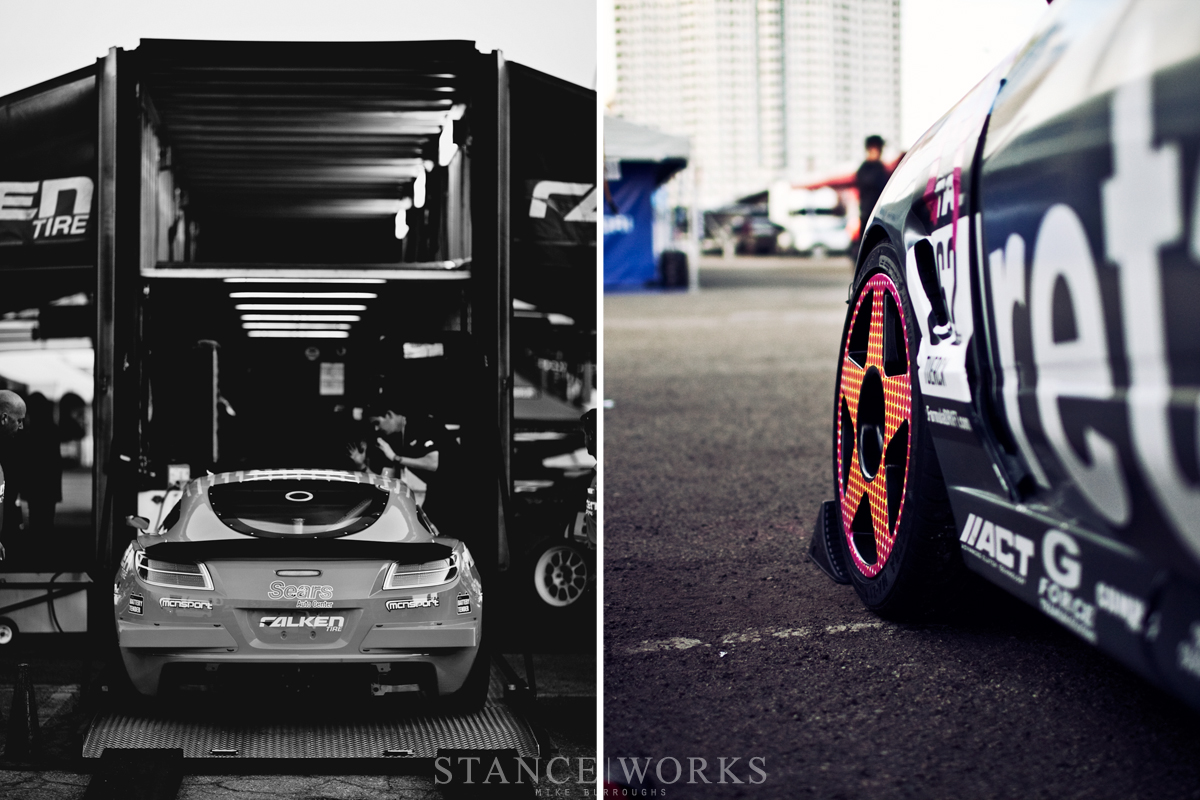 It's just a few hours before we've got to be back at the track, but we hope to see you there. Expect much coming from us tomorrow. If you can make it to a Formula Drift event this year, you need to, because it's going to be one hell of a season. 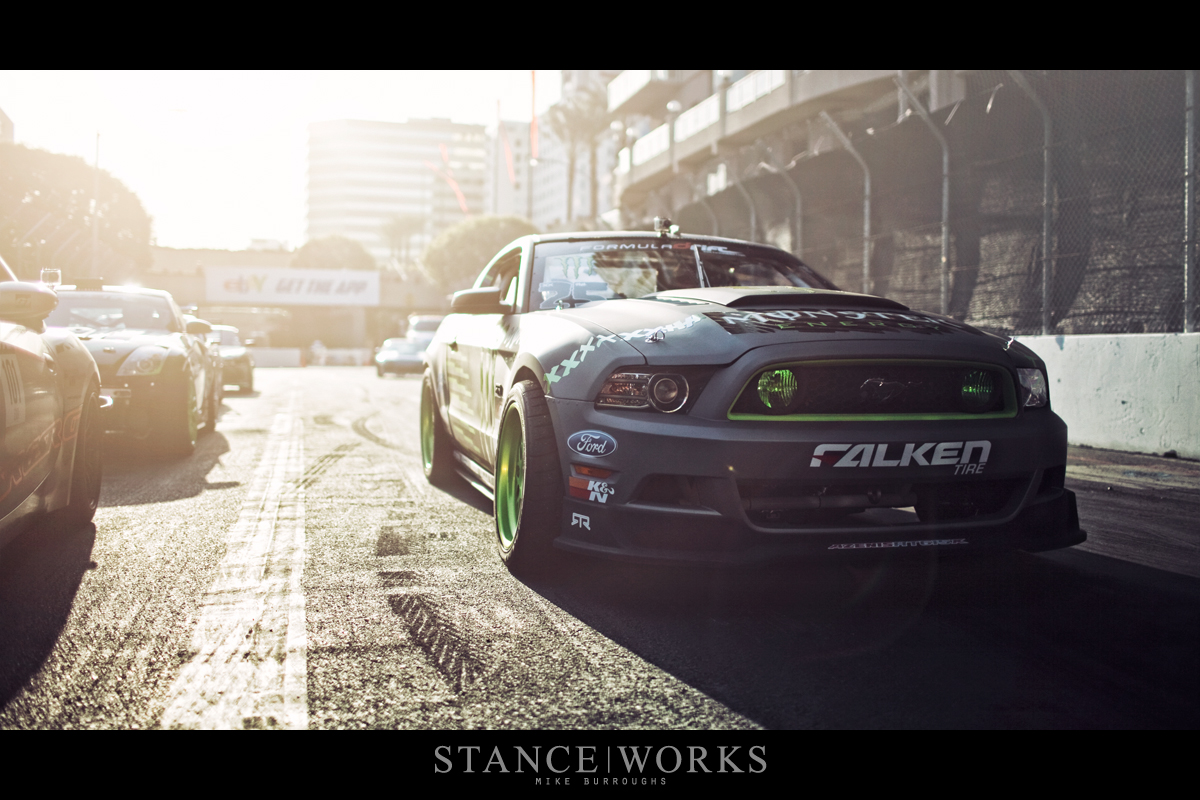